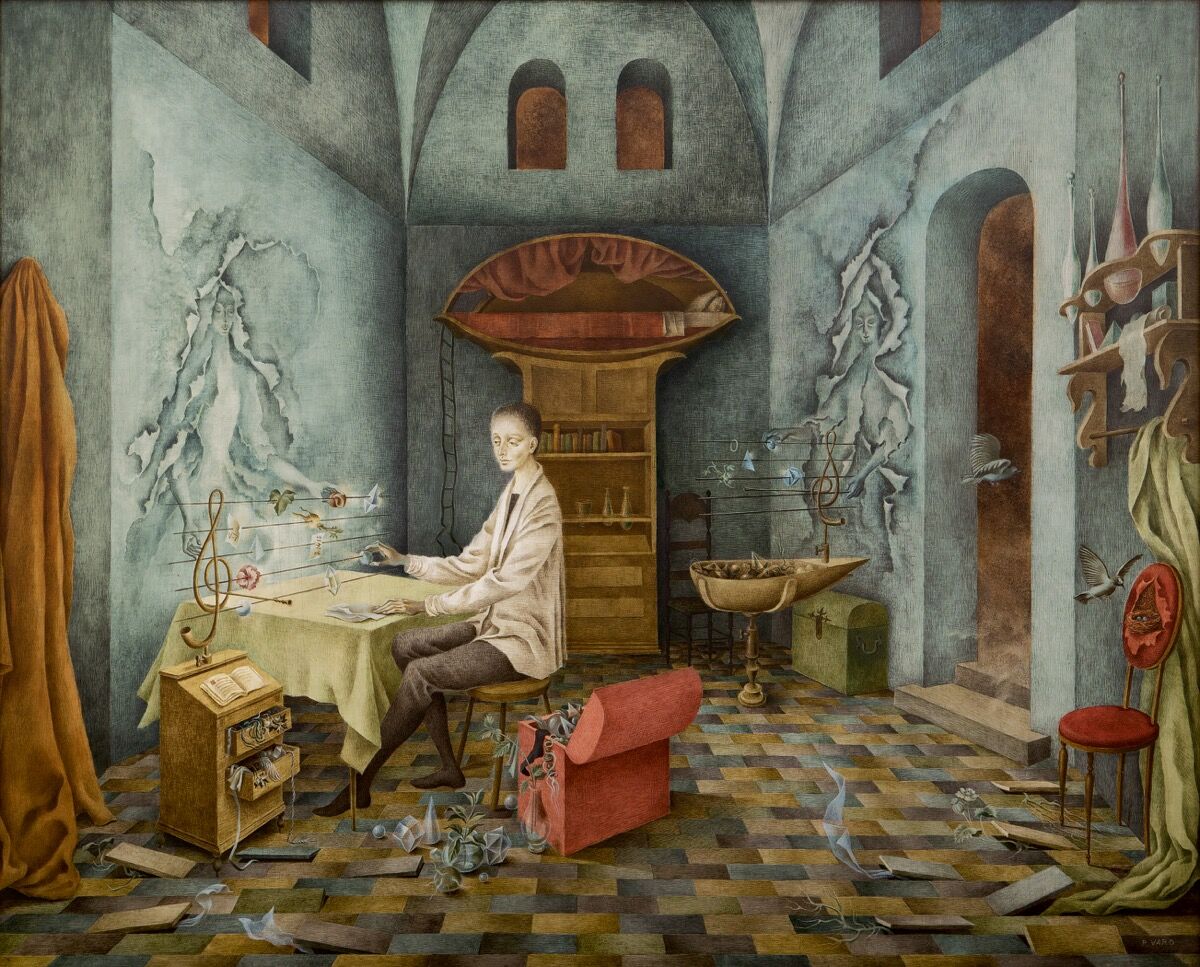 Despite the unprecedented circumstances surrounding this year’s auctions, the surging market for works by
Remedios Varo
continued its steady ascent through the six- and seven-figure range. Leading the charge was the sale of Varo’s masterful canvas Armonía (Autorretrato Sugerente) (1956), which surpassed its high estimate of $3 million without a hitch, leaving the floor of Sotheby’s marathon virtual auction in June for a record-breaking $6.1 million. Varo’s previous auction record of $4.3 million was set in 2014 at Sotheby’s by her 1960 painting Hacia la Torre. This season’s Sotheby’s sale also saw her 1959 painting Microcosmos (Determinismo) sell close to its high estimate of $2 million, for $1.8 million, making it the fifth-highest price paid for the artist’s work at auction.
“A great Varo is worth its weight in gold,” said Wendi Norris, of Gallery Wendi Norris. Having represented Varo’s work for the past 18 years, Norris has become one of the de facto experts on the artist’s work, advising museum shows and auctions. “There is no estate or foundation,” she explained. “At the time that I started, her widower, Walter Gruen, was still alive; I was working primarily with him and a cadre of collectors.” Although she never met the artist in person (Varo died in 1963), Norris was in regular communication with her family and has visited Varo’s home in Mexico City multiple times. “Her work is so incredibly rare and so specific in the way that it’s made,” she said.
Born in Spain in 1908, Varo had already led an exceptionally colorful life by the time she fled to Mexico at the onset of World War II, joining the ranks of many other European artist expats, including
Leonora Carrington
,
Kati Horna
,
Alice Rahon
, and
Wolfgang Paalen
. Having left her first husband to live with the artist and activist Esteban Francés and then the poet Benjamin Péret in Paris in 1937, she was already actively involved in the Surrealist circle and knew Carrington, Paalen,
André Breton
,
Dora Maar
,
Roberto Matta
, and
Max Ernst
. In 1938, Varo’s work was included in the International Surrealist Exhibition in Paris.
It was in Mexico, however, that Varo discovered her truest practice as an artist. Marrying her rigorous formal training with fantastic, Surrealist themes, Varo rendered her magical narratives with exceptional detail and imagination. She, along with Carrington and Horna (the trio was often referred to as “the three witches”), would form a vital nexus for the Surrealist movement in Mexico. Varo died of a heart attack in Mexico City at the age of 54.
Following fundamental laws of economics, the scarcity of Varo’s work is a simple but major driving factor in the increasingly high valuation of her market. “Varo passed away unexpectedly at the prime of her career,” explained Virgilio Garza, head of Latin American art at Christie’s. “That, combined with the fact that her painting process was painstakingly slow, meant that she did not produce that many pictures.” Like many artists’ oeuvres, only a handful of Varo works are considered masterpieces. For Garza, those paintings are ones that include particular but quintessential elements—fantastic architecture, magically animated objects, and haunting, often indiscernible narratives. “Those are the pictures you see fetching the higher prices,” he said. 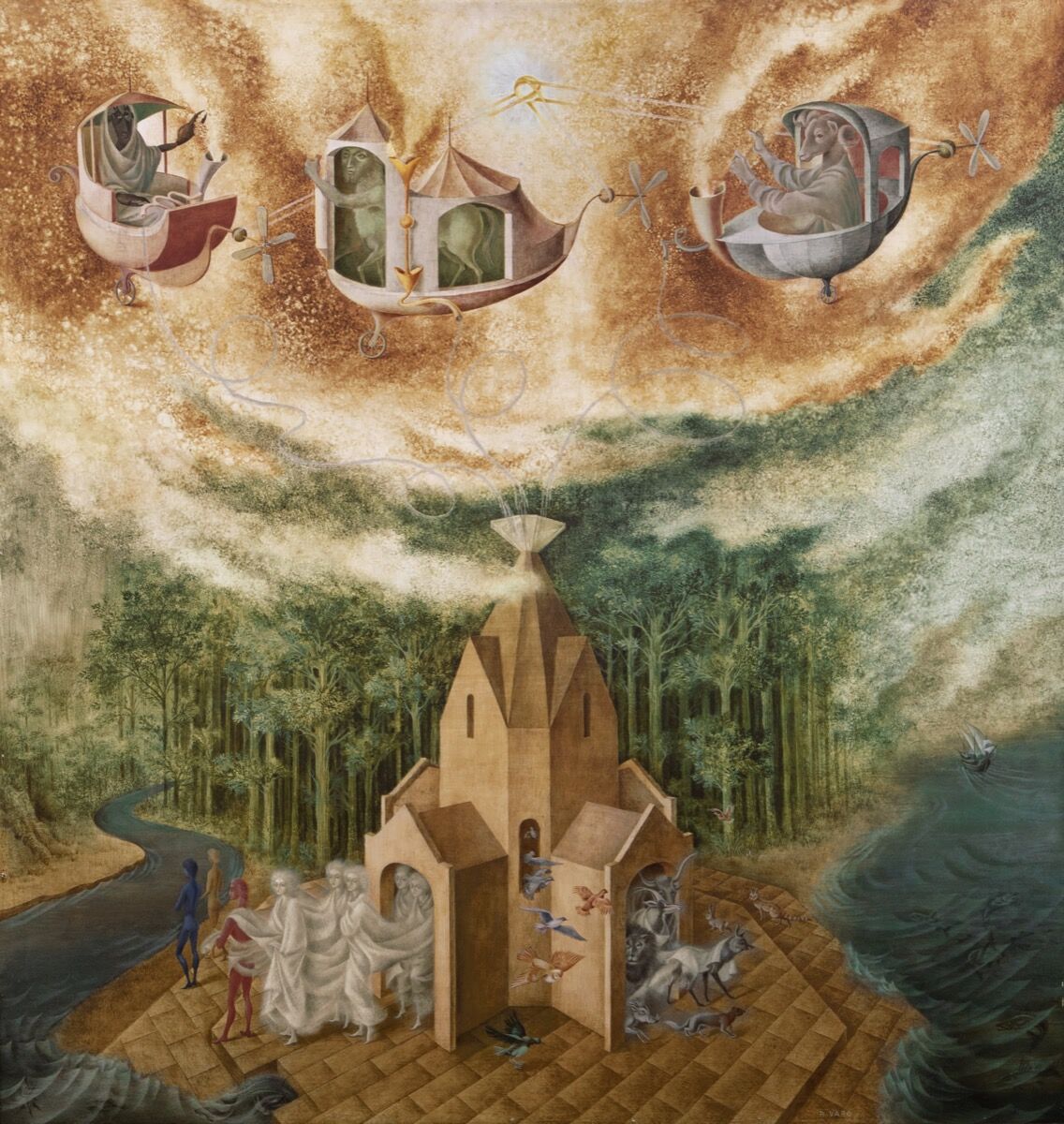 The works that recently sold at Sotheby’s are emblematic of those characteristics. In Armonía, a thin, androgynous figure sits serenely at a desk, arranging various glowing trinkets including crystals, leaves, a turnip, and seashells as notes onto an invented music-making device. Ghostly, dust-blue figures materialize in the cracking paint of the walls, assisting in the musical arrangement. Translucent sheets and stubborn, curious plants respectively flutter and poke out from beneath the muted, multicolored floorboards. Two birds have laid a pair of eggs in the crimson upholstery of a chair; mid-flight, one of the birds exits an open door frame that leads into a smoggy, rust-colored abyss. It’s easy to get lost in Varo’s work.
“In the case of Armonía, this is the best Remedios Varo that’s been seen on the market in a very long time,” said Julian Dawes, co–deputy head of the Impressionist and modern department and head of evening sales at Sotheby’s. “It was unquestionably a singular thing that a collection like that would come to market. There are paintings by her that were sold 10 years ago that would sell for comparable prices to Armonía today, but there are very few of them.”
Contributing to that market scarcity, collectors who have great works by Varo are seldom looking to part with them. “They’re like their children!” said Norris, describing how intensely devoted Varo’s collectors are. “The people who own these pieces knew her and supported her and bought her works right out of the shell back in 1963.”
“People who bought these 10 years ago aren’t looking to sell them,” echoed Dawes. “Even with the appreciated value of her work, the market is one of such passionate and sophisticated collectors that I don’t think anyone’s going to be flipping Remedios Varo works.”
In addition to the rarity of her works, a steadily growing body of scholarship in recent years has helped both broaden and deepen interest among institutions and collectors. As curators become more invested in amending art-historic omissions and broadening the narrative scope to include those artists who were historically excluded from the canon, artists like Varo are at long last getting their due. “There was a very official misogyny to Surrealism, as it was codified by André Breton,” explained Dawes. “Women were really not taken seriously by the members of the Surrealist movement, and by extension, the critics and the market, which is ridiculous given how integral they were to the formation of the ideologies that define Surrealism, as well as being the greatest practitioners from a technical perspective.” 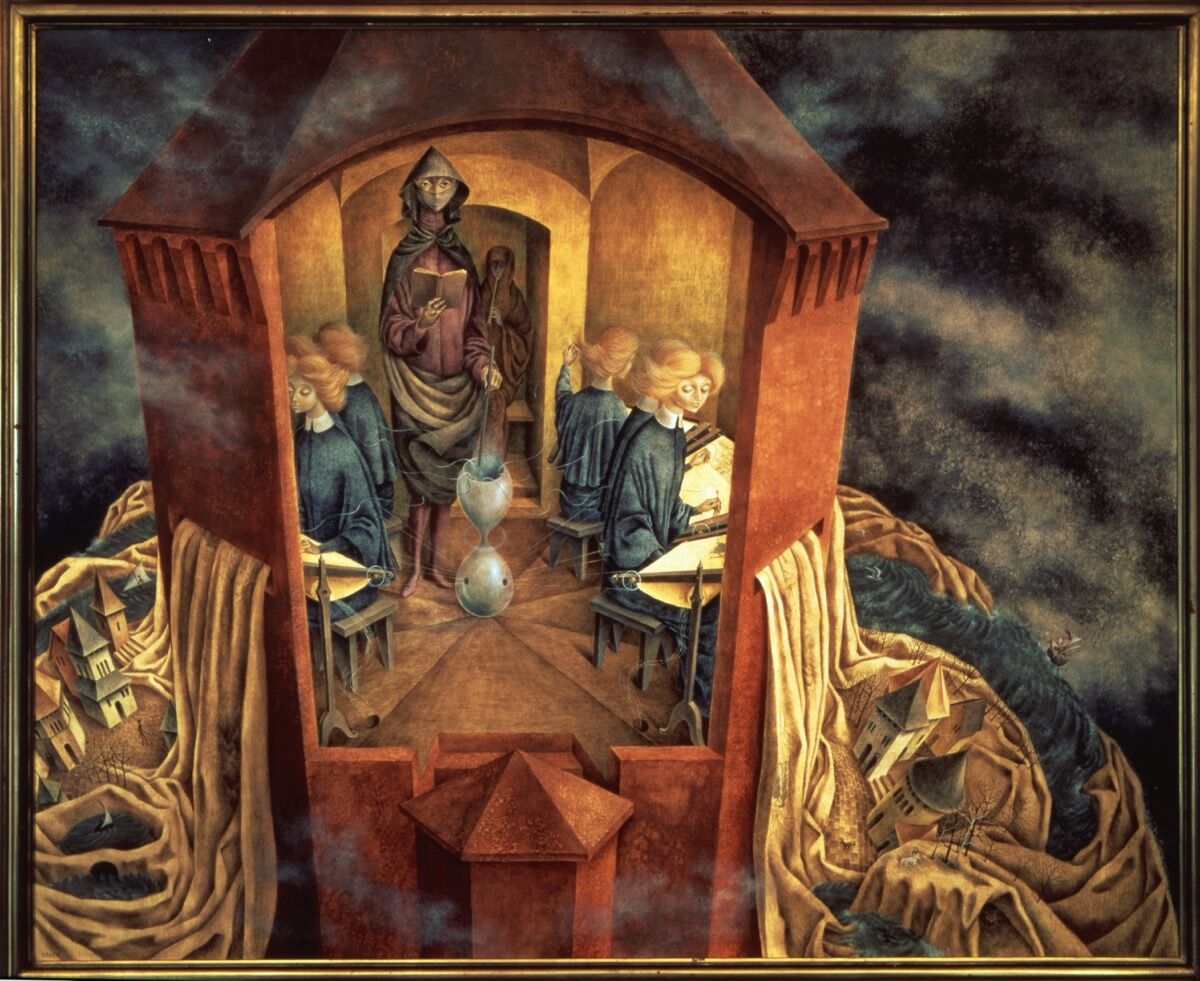 Advertisement
“These women—including Leonora Carrington and
Dorothea Tanning
—were so ahead of their time,” said Norris, who also shows works by those two artists, adding that it was critical not to limit these artists within the framework of “women Surrealists.” “You would never call Max Ernst a ‘male Surrealist,’” she quipped.
In 2012, Norris was contacted by the Museum of Modern Art to help acquire its first-ever Varo work, The Juggler (The Magician) (1956). Currently on view as part of the museum’s historic rehang, the work now takes pride of place within the institution’s Surrealist gallery, alongside contemporaries like Carrington, Ernst, and
Salvador Dalí
. “That rehang is very important when it comes to considering how the market is informed by museum presentations and curation,” said Dawes. “The MoMA has made a very strong statement about women Surrealists in the way that they’ve rehung their Surrealist gallery and in the recent acquisitions they’ve made.”
Enormously celebrated within Mexico’s art community—a posthumous retrospective of Varo’s work at the Museum of Modern Art in Mexico City in 1971 surpassed attendance records by
Diego Rivera
and
Jose Clemente Orozco
, drawing the largest audience in the museum’s history—it’s only due to recent scholarship that Varo has come into the global purview. “A lot of museums are looking for her work, which is a big deal,” said Norris. “The collector base is also increasingly global—we’re working at collectors in Asia and Europe. I think it’s only going to continue to be more global. I’m also seeing younger collectors like millennials coming to this market.”
Varo’s work will soon be featured in two major traveling exhibitions: “Global Surrealism” at Tate Modern and the Metropolitan Museum of Art; and “Surrealism and Magic: From Max Ernst to Leonora Carrington” at the Peggy Guggenheim Collection in Venice and the Museum Barberini in Potsdam, Germany. Though this increased scholarship and institutional interest has certainly driven up her demand, one doesn’t have to be well versed in Varo’s work to understand why it’s fetching top dollar. Exquisitely rendered and exceptionally detailed, Varo’s paintings speak for themselves. “When you expose somebody—particularly someone who’s a fan of Surrealism—to her work, they can’t help but understand its value and quality instantly,” said Dawes. “There’s very little explanation needed.”
As to the future of Varo’s market, he believes there’s still a long way to go before the true height of the artist’s value is revealed. “I would bet anything on a painting of hers selling for more than $10 million in the next five years,” he said. “The depth of the desire for her work is so much greater than the availability that it will be interesting to see what happens next—whether another Varo can even be located!”
Shannon Lee is Artsy’s Associate Editor.
Related Stories