This Remote Artist Residency Is Set on a Tiny Fishing Island 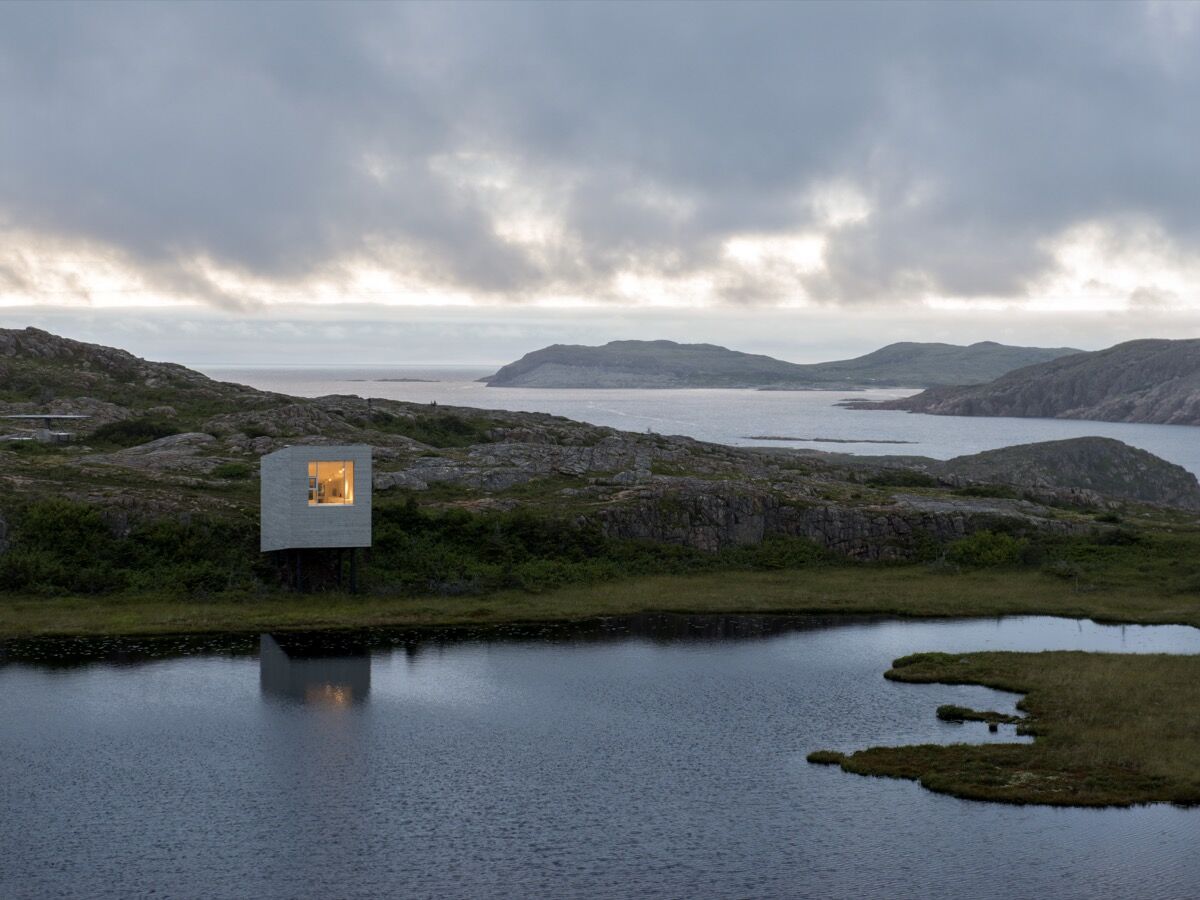 Writer Joseph del Pesco had been searching for a quiet place to collect his thoughts. When he landed on Fogo—a tiny, windswept island off the coast of Canada’s easternmost province, Newfoundland—he found it.
“Fogo is an experience in remoteness,” he tells me over the phone. “There is an uncharted quality to the terrain—an almost alien landscape.”
Fogo Island is known for its isolation. It’s located in a time zone, 1.5 hours ahead of Eastern Standard, that only covers Newfoundland and its surrounding islands. Unruly Atlantic swells and wandering icebergs surround the rocky land mass, whose landscape is comprised of craggy granite expanses and bright green meadows, usually blanketed by snow.
For all its stark natural beauty, Fogo hasn’t been a popular tourist destination. The journey to get to the island is long, and its winters longer. But in recent years, it’s become a favorite retreat of painters, writers, filmmakers, musicians, and a host of other creatives, all of whom were brought to the island through a residency called Fogo Island Arts (FIA). They arrive looking for respite from the busy, hyper-connected cities they tend to call home, and they often leave with a sense of clarity—and community. 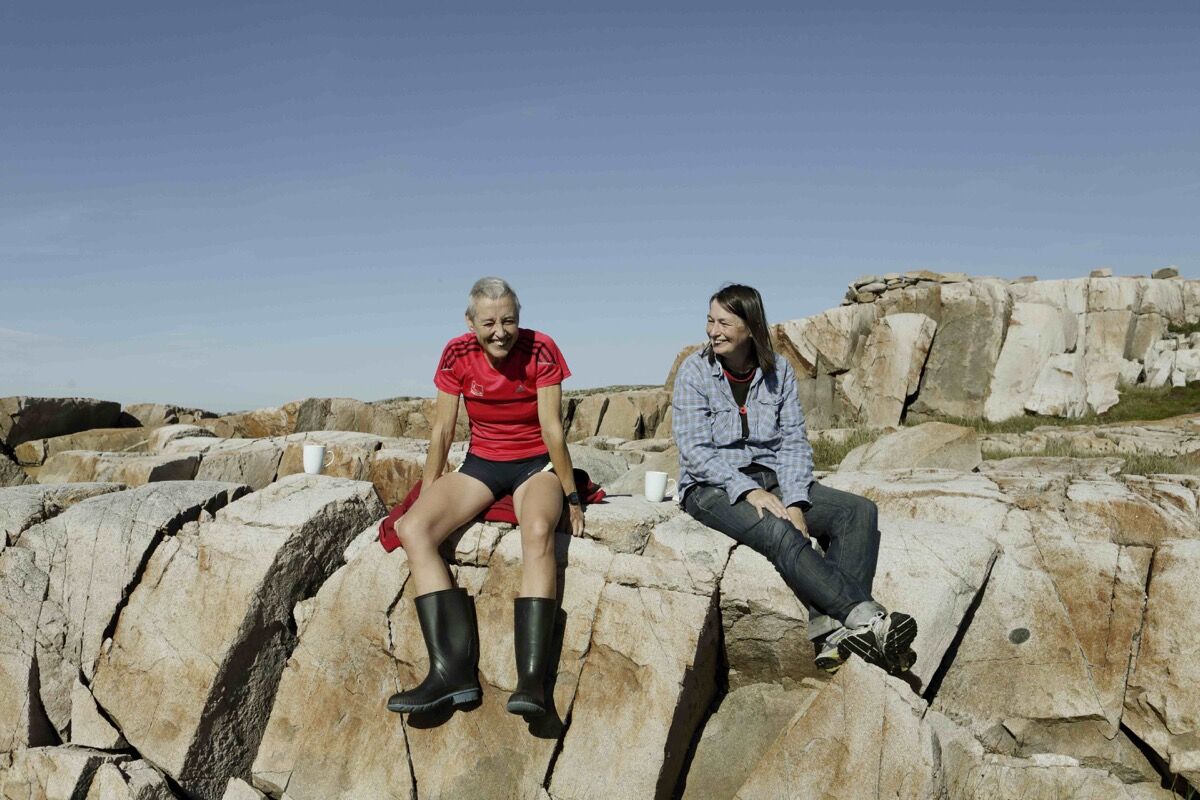 Now in the seventh year of the residency program, FIA has brought some 100 artists to Fogo since 2010. After their residencies come to a close (lasting for one to three months), many choose to return to the island—which was once on the brink of obsolescence, but is now looking towards a more sustainable future, bolstered in no small part by its growing community of artists.
FIA, which also consists of an art venue and puts on a series of lectures and conferences, was established in 2008 by native Fogo Islander Zita Cobb. One of the island’s best-known and wealthiest residents, Cobb has a dramatic rags-to-riches story to her name.
One of seven children, she was raised on Fogo in a small house without running water or electricity. After earning a business degree and working several jobs at oil companies across Canada, she took a post at the Ottawa-based fiber optics company JDS Fitel in 1989, and eventually became CFO. In 2001, two years after JDS Fitel merged with the U.S. company Uniphase, she exercised her stock options and came away with $69 million.
In the following years, Cobb turned her attention back to her childhood home of Fogo, whose fishing-based economy had long struggled in the face of declining cod populations and state-imposed fishing regulations. In response, she and two of her brothers set up Shorefast Foundation, a philanthropic organization with a mission to “build cultural and economic resiliency for Fogo Island,” explains Alexandra McIntosh, FIA’s Director of Programs and Exhibitions. 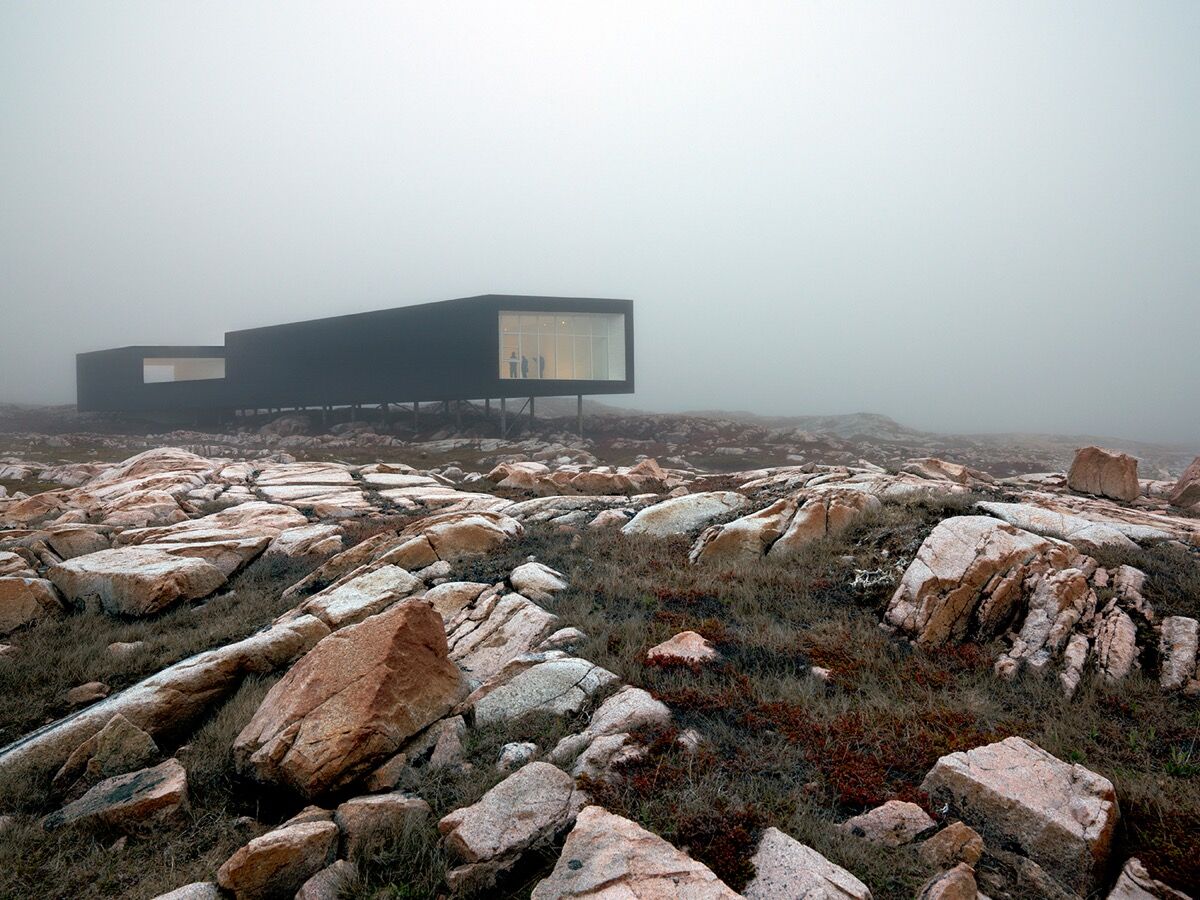 Advertisement
Shorefast Foundation spearheads and supports efforts related to fishing sustainability and innovation (a program called New Ocean Ethic), historic preservation of vernacular architecture and traditional boat building, and business and cultural development on the island. They’ve also erected a stunning hotel, called the Fogo Island Inn, from which all proceeds, after covering operational costs, go back to the community.
Cobb is neither an art collector nor an artist, but from the beginning, she included support for the arts amongst Shorefast’s initiatives. “She saw art as a way of knowing, belonging, and making sense of the world,” McIntosh notes. “The issues faced on the island are issues present across the globe, and bringing artists to Fogo became a way to connect with other people and other places—to share, engage, and broaden perspectives.”
Indeed, when the residency launched in 2010, it brought an international group of artists, working in a range of mediums, to the island. German-born, Los Angeles-based painter
Silke Otto-Knapp
was one of them. As with all residents, FIA funded Otto-Knapp’s travel to the island, and set her up with a car, a heritage home in town, and a studio a short hike or drive away. 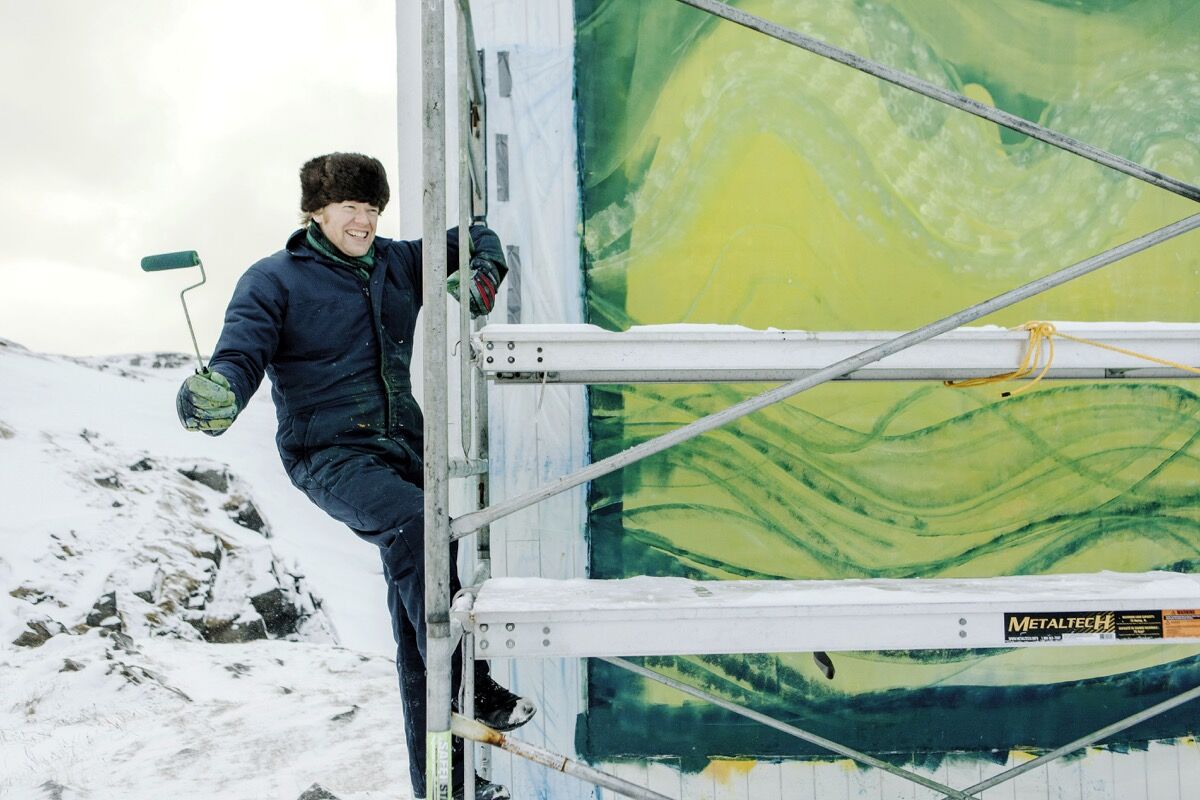 Artists’ homes and workspaces are spread across four of the island’s small towns, long ago anointed with names like Deep Bay, Tilting, and Joe Batt’s Arm. Otto-Knapp remembers the dramatic setting of her first studio. “Both the architecture, from the outside, and the views, from the inside, were so striking,” she recalls. “The windows frame these incredible seascapes.” Each of the four studios on Fogo were designed by Newfoundland-born architect Todd Saunders. They are luminous, elegant boxes on stilts, inspired by traditional Fogo vernacular architecture, and situated on public hiking paths abutting the volatile sea.
Otto-Knapp didn’t paint her surroundings during her first stay on the island. But its “stark separation between sea and land and the horizon,” as she explains it, began to seep into her work after she left. Some of her ghostly, grayscale paintings have become populated with hazy seascapes that aren’t direct representations of Fogo, but capture the place’s severe terrain and mystical energy.
The artist has since returned to Fogo almost every year. But it’s not only the striking landscape that brings her back. “Obviously it’s a very beautiful place—the seascape is very barren and very striking. It sounds so isolated, but I actually found it to be a very social place,” she tells me. “That’s one of the reasons I like to go back there—I feel like I’m part of a community.” She describes boat rides with locals who’ve become friends, and regular conversations with a local artist over his organic vegetable and chicken stand.
Beyond making a short, public presentation about their practice, residents aren’t required to interact with the landscape or the local community, but most do both. “We don’t want to instrumentalize artists; they are not at the service of Fogo Island,” says Nicolaus Schafhausen, the Strategic Director of FIA and Shorefast Foundation. “But inevitably they do interact—not only on an intellectual, academic level—but also emotionally, with the people.” 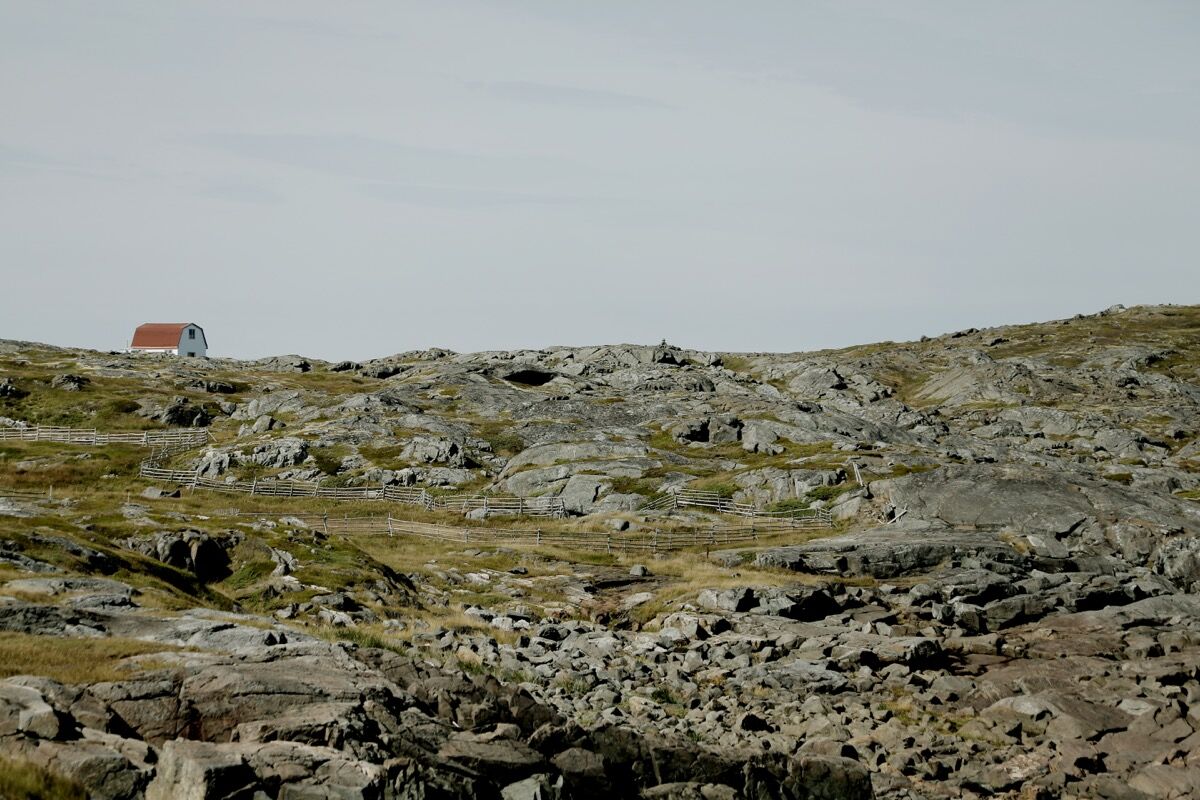 While del Pesco, one of Fogo’s most recent residents (brought there through a partnership between FIA and Canadian artist-run center Art Metropole), sought moments seclusion, which he did find, he went away with meaningful ties to people he met on the island, too.
Each day he’d wake up in his wooden saltbox house to a view of the sea, topped with passing icebergs. He’d pass through the town of Deep Bay on his 20-minute hike to the studio, where he’d make a fire and chip away at a book of short stories he’d been writing, called The Museum Took a Few Minutes to Collect Itself.
At around 2 or 3 p.m, he’d leave to find some food. The rest of the day might be spent hiking or grabbing a bite to eat with a new friend. During his stay, he met Newfoundland-based artist
Marlene Creates
, who was showing her work at Fogo Island Gallery. Together, he remembers, they took a boat “the size of a taxi into the giant, swelling sea to look for gigantic icebergs that are the size of a city block.”
Del Pesco also got to know Kay and Curtis Burns, a couple who run a coffee shop playfully dubbed Flat Earth Coffee (according to Flat Earthers, Fogo Island sits at a corner of their world map). “I was so desperate for good coffee, I was kind of sucked into their world,” he laughs. “They taught me a lot about the island.” 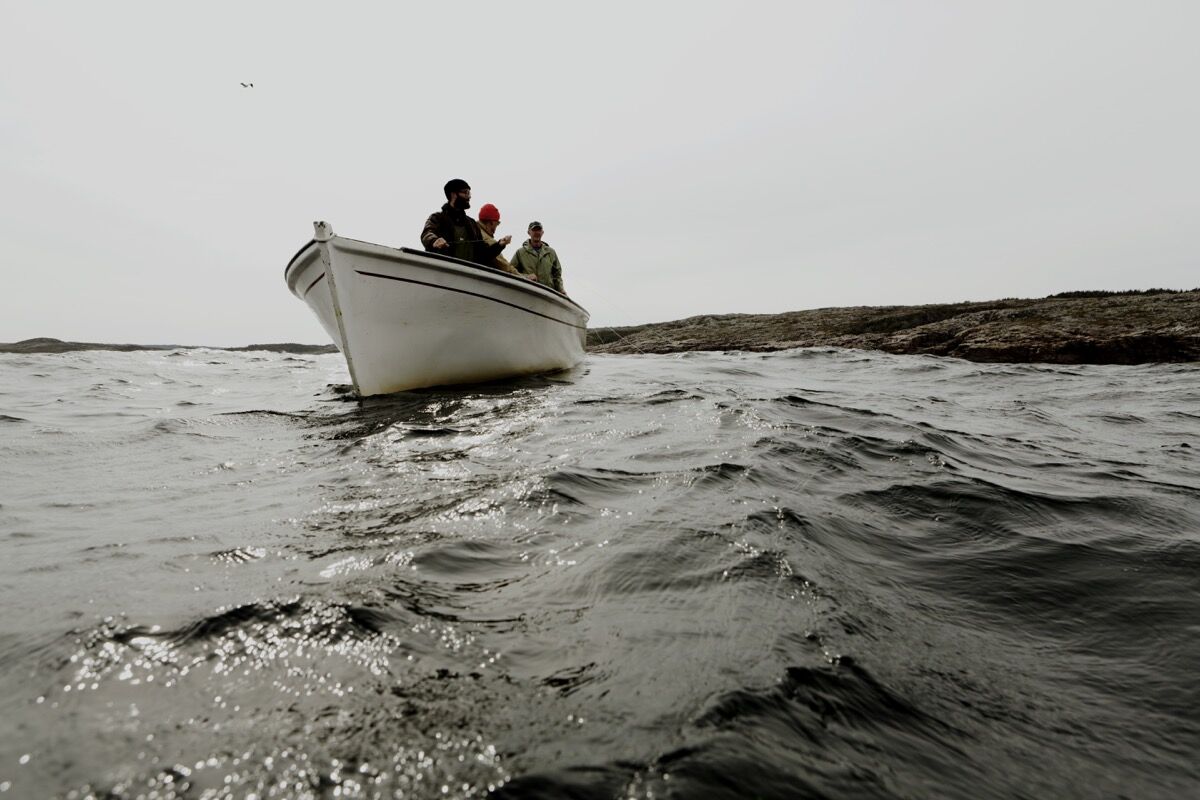 For both del Pesco and Otto-Knapp, Fogo not only offered a place for quiet introspection and concentrated work, but also a model for a different lifestyle—one tied more closely to nature and a sense of community than they were accustomed to. “I grew up in the countryside in Germany, but I did not experience the kind of openness there that I did coming to Newfoundland and Fogo Island,” Otto-Knapp says.
“I think it has something to do with how the geography affects the economy, the social structures, really every aspect of life there,” she continues. “The ocean determines lives so much—historically and even today.”

A previous version of this article stated that Fogo Island has its own time zone. The island is located in the Newfoundland time zone, which it shares with Newfoundland and its other surrounding islands.
Alexxa Gotthardt
Related Stories