Ren Hang, Whose Photos Stirred Passion and Controversy, Dead at 29—and the 9 Other Biggest News Stories This Week

01  Chinese photographer Ren Hang has died at the age of 29.

(via Time)
The self-taught artist and poet was known for his beautiful, provoking, and explicit images of the human body and its form. Making friends and even fans the subject of his work—in which nude bodies take on a statuesque and stirring presence—
Hang
began to take pictures in order to get away from the monotony of a university classroom. Though he amassed a beloved following during his brief career, Hang’s erotic work earned the ire of Chinese authorities, who arrested him multiple times and confiscated his work. But throughout his life, Hang continued to work in defiance of attempts to silence him. The cause of death has not been confirmed, but Hang had made his battles with cyclical depression the subject of his poetry in the past. Alexander Öberg, a longtime collaborator, told TIME that Hang was a “lovely person and an incredibly creative artist who had so much more to share with the world.”

02  Established Chelsea gallerist Andrea Rosen announced in an email Tuesday that she will no longer represent living artists and will “no longer have a typical permanent public space.”

(Artsy)
Rosen said the transition will take place over the coming months. Her announcement was buried deep within a letter in which Rosen first explained that she would be joined by David Zwirner in co-representing Felix Gonzalez-Torres’s work, which has formed a centerpiece of her gallery’s program for decades. Rosen opened her eponymous gallery in 1990, when she was just 27, with an exhibition of Gonzalez-Torres’s work. Today, her stable also includes the rigorous, sometimes baldly political practices of biennial favorites like David Altmejd, Josephine Meckseper, Mika Rottenberg, Andrea Zittel, Ryan Trecartin, and more. Given Rosen’s lasting relationships with artists and the admiration with which her peers have viewed her approach as a gallerist, the closure of her gallery is surprising. Rosen herself noted that it’s not entirely as she would have imagined, “My wish would have been to try to incorporate the depth of my growing intentions within my current immersive and beloved structure,” she wrote.

03  A group of senators signed a letter in support of the NEA and NEH after the agencies were confirmed to be on the “hit list” of programs targeted for elimination by President Trump.

(via Senator Gillibrand)
Roughly a month after reports first emerged that the National Endowment for the Arts was potentially on the chopping block, the New York Times confirmed that the NEA is almost certainly being targeted for elimination. The list of agencies considered a “misuse of taxpayer dollars” by the administration will be finalized by March 13th. In response to this news, 24 senators (all Democrats, save two Independents and two Republicans) penned a letter to President Trump affirming their support for the NEA and the role it plays in American society. “Federal support for the arts and humanities is essential to our education system, economy, and who we are as a nation,” the letter stated. “We hope you will keep this in mind as you consider proposals that support these fundamental American institutions.”

04  A drawing and a painting from Cornelius Gurlitt’s collection have been returned to the heirs of their initial Jewish owners—bringing the total number of restituted works to four.

(via The Art Newspaper)
The German minister of culture delivered the painting, by
Impressionist
Camille Pissarro
, to the descendants of Elsa Helen Cohen on Monday. Cohen had sold the work in 1938, using the money to flee to the United States. The second restituted work, a drawing by
German realist
Adolph Menzel
, had been returned to the heirs of French-Jewish businessman Max Heilbronn a few days earlier. The late Gurlitt inherited nearly 1,500 artworks from his father, Hildebrand, an art dealer for the Nazi party. Kept hidden for decades, the trove was discovered by authorities in 2012 and revealed to the public the following year. Since then, a German government task force has attempted to determine ownership of the art in a process that has garnered criticism for its extended timeline. Although researchers have determined that 91 works from the collection were likely looted or sold under duress—by artists such as
Chagall
,
Cézanne
,
Dürer
, and
Degas
—as of this week, only four have been restituted.

05  Protesters gathered in MoMA’s lobby last Friday, demanding that a trustee with ties to President Trump be dismissed from the museum’s board.

(via Hyperallergic)
Larry Fink, who sits on the museum’s board, is also CEO of BlackRock, the largest asset management corporation in the world. He has served as Trump’s economic advisor, attending a policy meeting with the president and other leading CEOs in early February. On February 17th, at the museum, protesters carried a banner that read “Resistance Against Fascism Is the Best Art”; artist Coco Fusco read a statement from arts collective Occupy Museums that detailed Fink’s affiliations with Trump and called for the museum to sever ties with him. “To advise this regime is to normalize White Supremacy,” one line read. The protest eventually moved outside to 53rd Street where statements including “MoMA Don’t Normalize Trump” were projected onto the museum’s facade. Last year, MoMA awarded Fink with the David Rockefeller Award, which recognizes an “individual from the business community who exemplifies enlightened generosity and effective advocacy of cultural and civic endeavors.” The institution has not yet issued a response to the protest.

06  A Michigan dealer of modern American art was sentenced in New York to 41 months in jail for selling forgeries.

(via the Associated Press)
Eric Spoutz was also ordered to pay back $1.4 million in ill-gotten gains and $154,100 in restitution. Among the artists whose works he claimed to be selling were
Robert Indiana
,
Willem de Kooning
, and
Joan Mitchell
. In order to fool buyers into thinking that he had either purchased or inherited these works, the 33-year-old Spoutz produced fake bills of sale, receipts, and even letters from deceased attorneys and others. He also operated under assumed names, at times going by “Robert Chad Smith,” “John Goodman,” and “James Sinclair,” according to artnet News. Manhattan U.S. Attorney Preet Bharara said Spoutz “used the full palette of deception to complete his decade-long work of fraud, swindling art collectors out of more than a million dollars.” The case was investigated by the FBI’s Art Crime Team.

07  A London gallery has come under fire after displaying neo-Nazi artworks and organizing a conference of publicly racist speakers.

(via The Guardian)
Last summer, LD50 gallery hosted a series of talks that featured white supremacist Brett Stevens and anti-immigration activist Peter Brimelow, among others. Titled “Neoreaction,” the conference was meant to establish “a dialogue between two different and contrasting ideologies,” according to gallery owner Lucia Diego. However, a recording of Brimelow’s talk revealed that most participating audience members were in favor of his views. LD50 also mounted a concurrent exhibition called “Amerika,” which displayed artworks containing Nazi and alt-right imagery and text. In response, a group calling themselves “Shut Down LD50” has written an open letter noting that the gallery “has acted as a platform for a cross-section of the most virulent advocates of contemporary extreme-right ideology.” They plan to hand out 2,000 leaflets in the area this weekend, informing the public of the gallery’s activities.

(via the New York Times)
The pop artist’s untimely demise in 1987, at age 58, has long been attributed to a routine gallbladder operation gone wrong. Now, new research by medical historian and retired surgeon Dr. John Ryan indicates that
Warhol
suffered genetic gallbladder problems for almost 15 years, a condition that contributed to his rapidly declining health in the month prior to his death. It was so severe that when the artist’s surgeon operated on him in 1987, he found his gallbladder full of gangrene; the organ fell apart as he removed it. Dr. Ryan’s research further reveals that Warhol had been addicted to speed, had barely eaten in the month before his death, and was suffering the long-term effects of a gunshot wound from 1968 at the hands of an angry groupie. Following the gallbladder operation, Warhol’s heart gave up, and he suffered ventricular fibrillation hours after he appeared to be recovering from the surgery. Dr. Ryan has been researching Warhol’s death since he retired four years ago, encouraged by his brother-in-law Hal Foster, a prominent art historian who has written on
Pop Art
.

09  A gallery in the L.A. neighborhood of Boyle Heights has shut down, in response to long-running protests by anti-gentrification activists.

(via Artforum)
PSSST, a non-profit arts space which opened last June, said it faced “constant attacks” from groups including Defend Boyle Heights (DBH) and Boyle Heights Alliance Against Artwashing and Displacement (BHAAAD). In one instance, protesters posted mock eviction notices on gallery doors in the area; in another, a nearby gallery was vandalized with expletive-filled graffiti referencing “white art.” As PSSST’s cofounders explained, the drawn-out controversy “made fundraising an impossibility.” PSSST was one of more than a dozen galleries that had moved into Boyle Heights during the last three years, an alarming trend for residents who feared rising property values that would eventually force them out of the area. Activists have called for all art galleries to leave the neighborhood, replaced instead by services like grocery stores or child care that would benefit locals. In a joint statement, DBH and BHAAAD called the news about PSSST’s closure a “victory” for the “296 families living in Pico Gardens, fighting against the privatization of their public housing and the thousands of Boyle Heights tenants that are struggling against harassment and rent increases.”

10  A congressman has filed a federal lawsuit contesting the removal of a high school student’s controversial painting from the walls of a Capitol Hill tunnel.

(via the St. Louis Post-Dispatch)
The work, painted by former St. Louis high school student David Pulphus as part of the annual Congressional Art Competition, alludes to the Ferguson protests and depicts several police officers with animal heads. Originally approved for display by the Architect of the Capitol (the office in charge of the contest), the painting hung for seven months before it was taken down following disapproval by Republican congressmen. Now, Representative William Lacy Clay—a Democrat from Missouri—has sued, stating that its removal constitutes a violation of free speech. “This case is truly about something much bigger than a student’s painting,” Clay said. “It is about defending our fundamental First Amendment freedoms which are currently under assault in this country.” The outcome of the case will depend on whether or not the competition is considered a public forum, experts noted. Previous rulings have established that it is illegal for government officials to censor opinions they disagree with in the context of a public forum. The Architect of the Capitol has a week to respond to Clay’s suit; a federal hearing is expected within three weeks.
Artsy Editors
Cover image: Ren Hang, Untitled 21, 2012 courtesy of Blindspot Gallery.
Related Stories 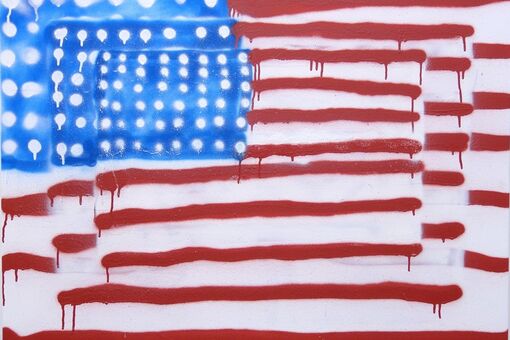 What NEA Supporters Can Learn from the Republicans Who Tried to Destroy It
Isaac Kaplan
Feb 22, 2017 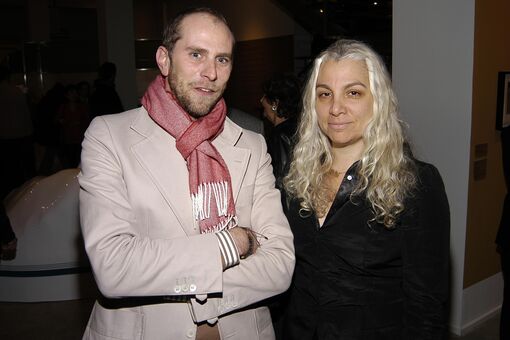