The Renaissance Portrait That Helped End a War 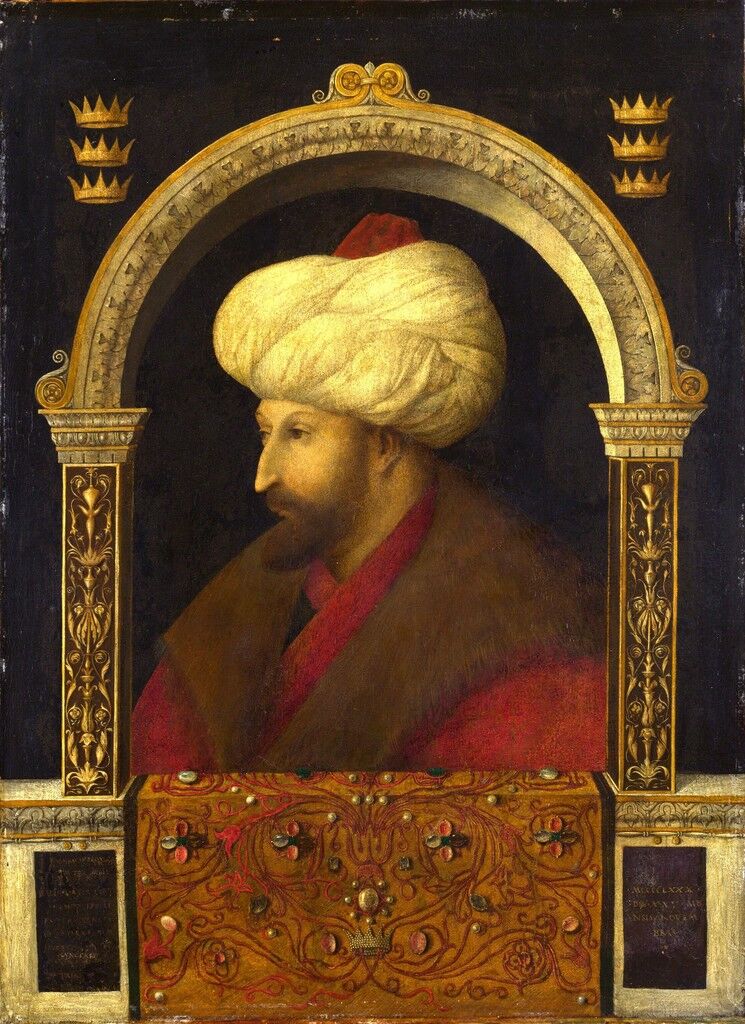 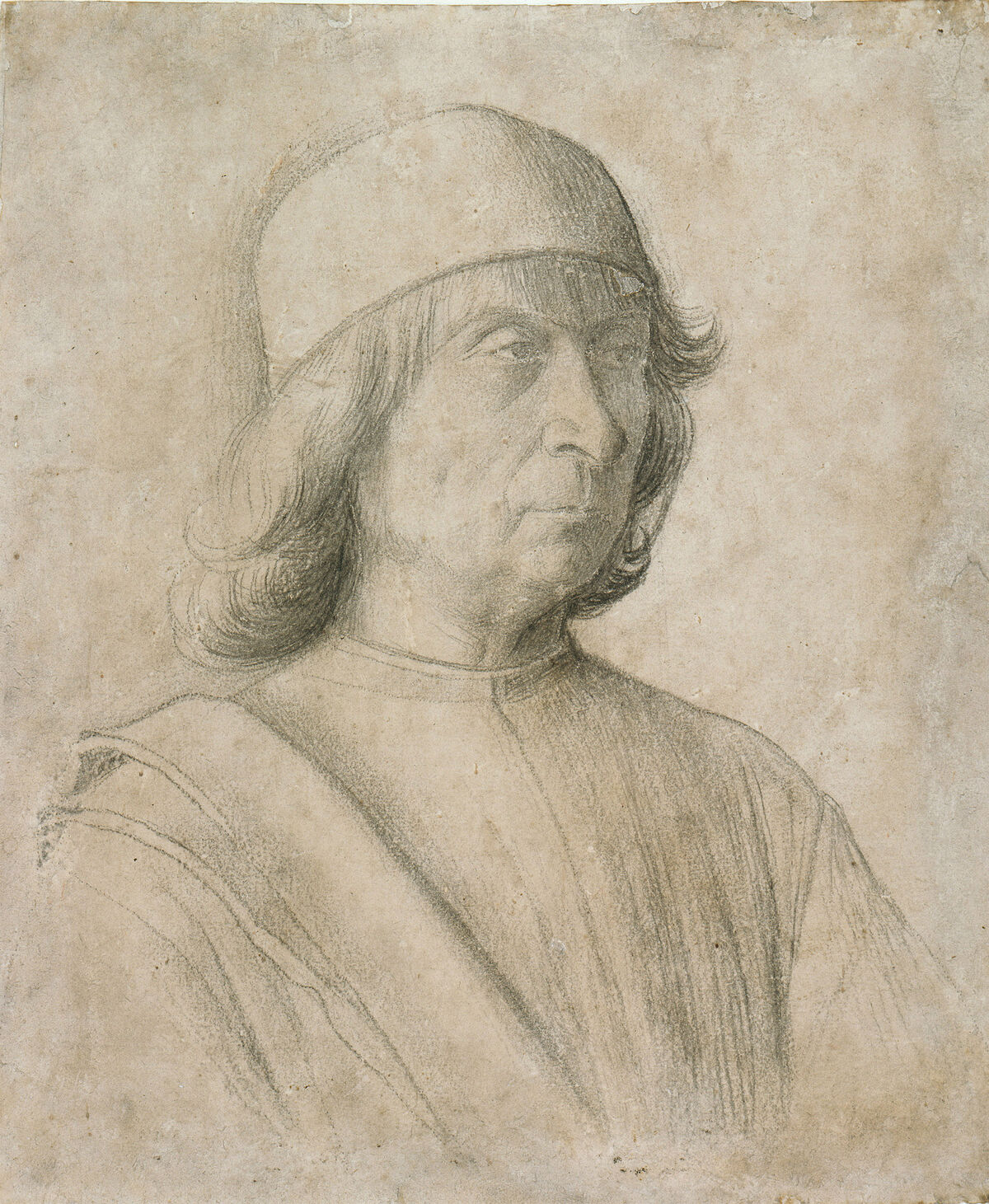 On May 29, 1453, an ambitious 21-year-old Ottoman sultan named Mehmet II sent shockwaves through the Western world. Following a 57-day siege, he successfully conquered Constantinople, toppling the Byzantine Empire. In his first act, Mehmet the Conqueror, as history has named him, marched into Hagia Sophia and declared it a mosque. For many historians, the fall of Constantinople—Christendom’s easternmost stronghold for 1,100 years—marked the end of the Dark Ages.
Mehmet’s conquest also created a precarious situation for the thriving, mercantile Republic of Venice. The city’s prosperity and cultural vitality had depended on its strategic position as a gateway to Asia and Africa, and centuries-long trade with the Byzantines. Although decades of intermittent war with the Ottomans ensued, in a surprising moment of cultural diplomacy, a masterful portrait of the sultan by one of Venice’s most revered artists would help bring the conflict to a ceasefire.
Bordering the Mediterranean Sea, Venice had established commercial links with Constantinople as early as the 10th century by obtaining exclusive trading privileges from the Byzantine emperors. Imported spices, carpets, raw silk, cotton, illustrated manuscripts, and inlaid metalwork (among other portable goods) made an indelible impression on Venetian culture. The influence of Moorish and Islamic styles can still be seen in Venice’s multicultural architecture. The prolific circulation of foreign ideas had also transformed Venice into one of Europe’s largest, wealthiest, and most powerful city-states.
Although Venice managed to hold back the Ottomans for several decades after the fall of Constantinople, when Mehmet extended an offer of peace in 1479, the republic, outnumbered, quickly accepted. In addition to customary spoils of war like treasure and territorial concessions, the sultan had an unusual demand: The Venetian Senate must send a painter to his court in Istanbul, the new, fast-growing capital of the Ottoman Empire.
The senate quickly selected Venice’s most acclaimed local artist:
Gentile Bellini
. 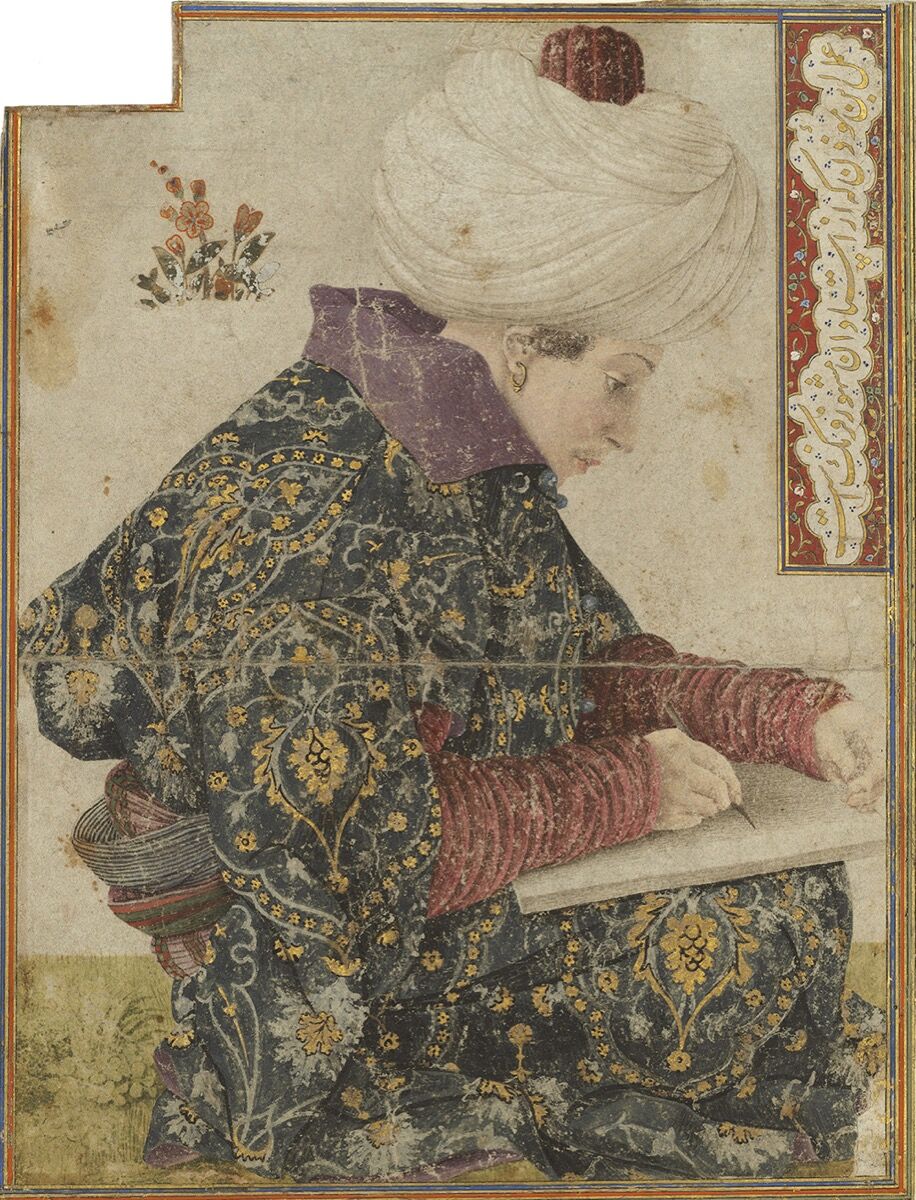 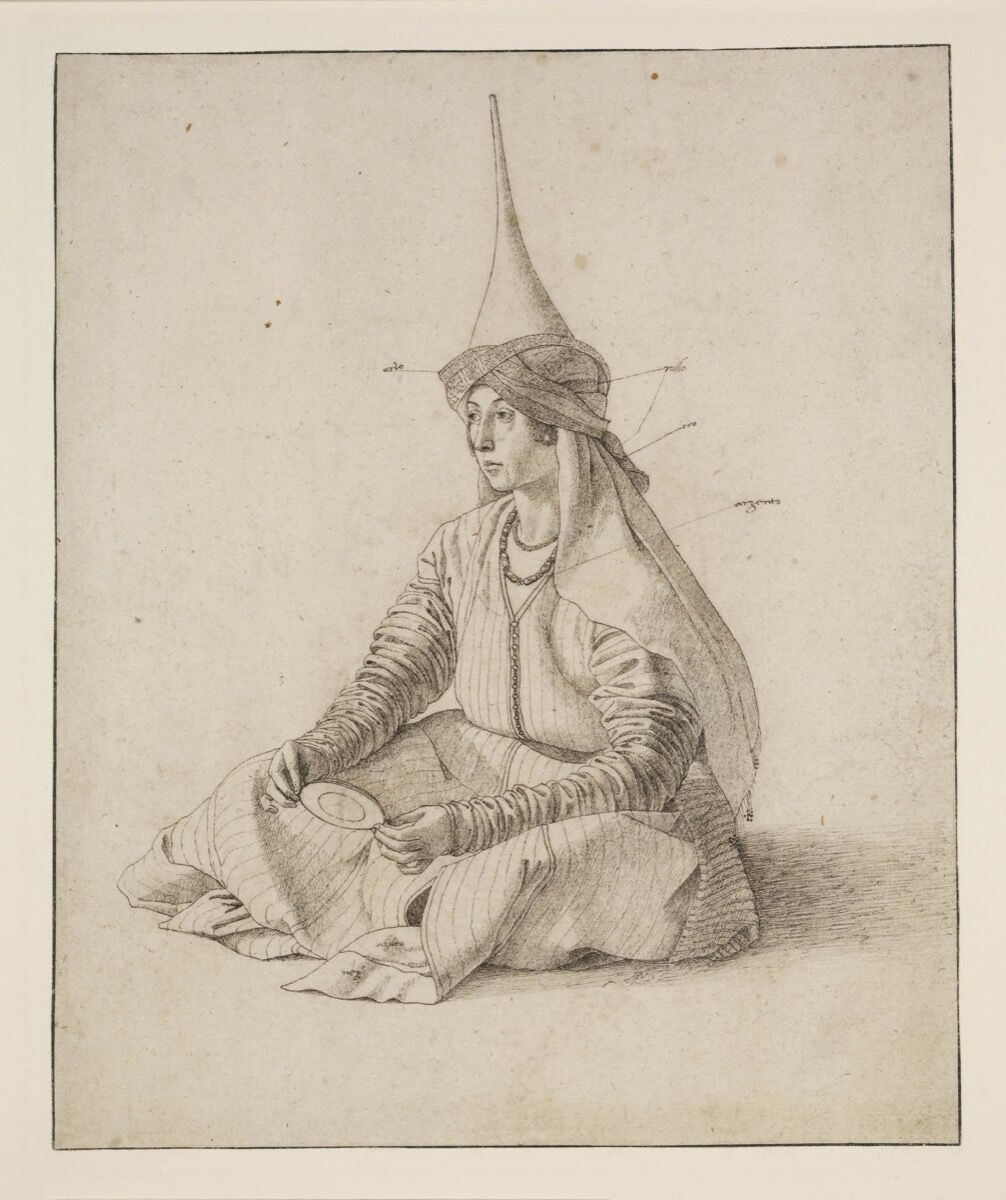 Bellini belonged to one of the leading families of painters in Italy. His father
Jacopo
counted Giorgione and
Titian
among his pupils, and along with younger brother
Giovanni
, Gentile trained in the family workshop. Known for highly detailed portraits and large-format compositions depicting Venice and its inhabitants, Gentile rose to the rank of official painter to the republic (though his brother has since eclipsed him in the annals of art history).
Gentile and Giovanni were in the middle of their biggest commission to date—decorating the Palazzo Ducale (a.k.a. Doge’s Palace)—when the Venetian Senate assigned the former the once-in-a-lifetime diplomatic mission. Armed with an album of his father’s drawings as a gift for the sultan, Bellini set off on an almost two-year trip that would become a catalyst for artistic exchange between Europe and the Islamic world.
Bellini’s portrait of the ruler, known as The Sultan Mehmet II (1480), remains one of the most captivating artifacts from his journey, during which he produced many paintings, drawings, and studies. It stands as one of the only contemporary portraits of the world’s most powerful man at the time, and serves as a startling illustration of art as diplomatic weapon.
Now in London’s National Gallery, The Sultan Mehmet II was heavily repainted in the 19th century, and as a result, it cannot be entirely confirmed to be by Bellini’s hand. Nonetheless, the portrait cleverly fuses elements of European and Islamic culture, and reveals the skills that so enchanted his patron.
In line with the trends in European portraiture of the time, Bellini depicted the sultan in resplendent detail, his three-quarter profile framed by an illusionistic archway. Yet Mehmet is also represented by the trappings of Islamic authority: His red caftan and luxurious fur mantle are accompanied by a headdress (a wrapped turban over a red taj) that indicates his rank and religious identity; a piece of jewel-encrusted Ottoman embroidery hangs down the front of the frame; and the three crowns of Constantinople, Iconium, and Trebizond flank him on each side.

Gentile Bellini
St. Mark Preaching in St. Euphemia's Square in Alexandria, Egypt, 1504-1507
Pinacoteca di Brera
Advertisement
Mehmet’s sharply hooked nose and receding chin demonstrate that the sultan prized the new developments in European painting, which favored realism and captured the expression of an individual over idealization. But there is nothing modest about this work: An inscription in the lower left corner once marked the sitter as “Victor Orbis,” or “Conqueror of the World.”
An effusive contemporary account of its reception, cited by the New York Times, notes that when the sultan observed the portrait’s amazing likeness, he dubbed Bellini the greatest painter who had ever lived. Partly because of Bellini’s influence, portraiture became a major part of Ottoman painting. (Religious Islamic art, on the other hand, discouraged the representation of living beings, a practice called aniconism.)
Like mythologized greats Alexander and Akbar, Mehmet proved to be an incredibly open-minded ruler, allowing his subjects a considerable degree of religious freedom, provided they were obedient to his rule. He also promoted an environment open to new ideas and cultural exchange, inviting European and Muslim artists, scientists, and scholars to his court. He founded universities; built mosques, waterways, and palaces; and generally set out to make Istanbul a capital befitting a great empire.
Thus, Bellini found himself in the midst of another Renaissance. He carefully studied his surroundings, producing many drawings of local men and women from different social groups, while taking particular note of their costumes. Works he created while at the sultan’s court also suggest that he had respect for his host country’s culture. Seated Scribe (1479–81), one particularly beautiful painting from this period, is an empathetic portrayal of the Islamic passion for the written word.
Following his return to Italy in 1481, Bellini found employment with the Duke of Mantua. What he had experienced in Istanbul, however, didn’t leave him. His portrait of the sultan was widely copied in paintings and prints, and became known throughout Europe. Bellini and his pupils drew on the sketches from his trip in their own paintings, which have strikingly accurate details of Turkish dress. For Venetian Renaissance painters, stock drawings of Muslim figures became prized possessions, passed down from one generation to another and circulated among workshops for reuse. 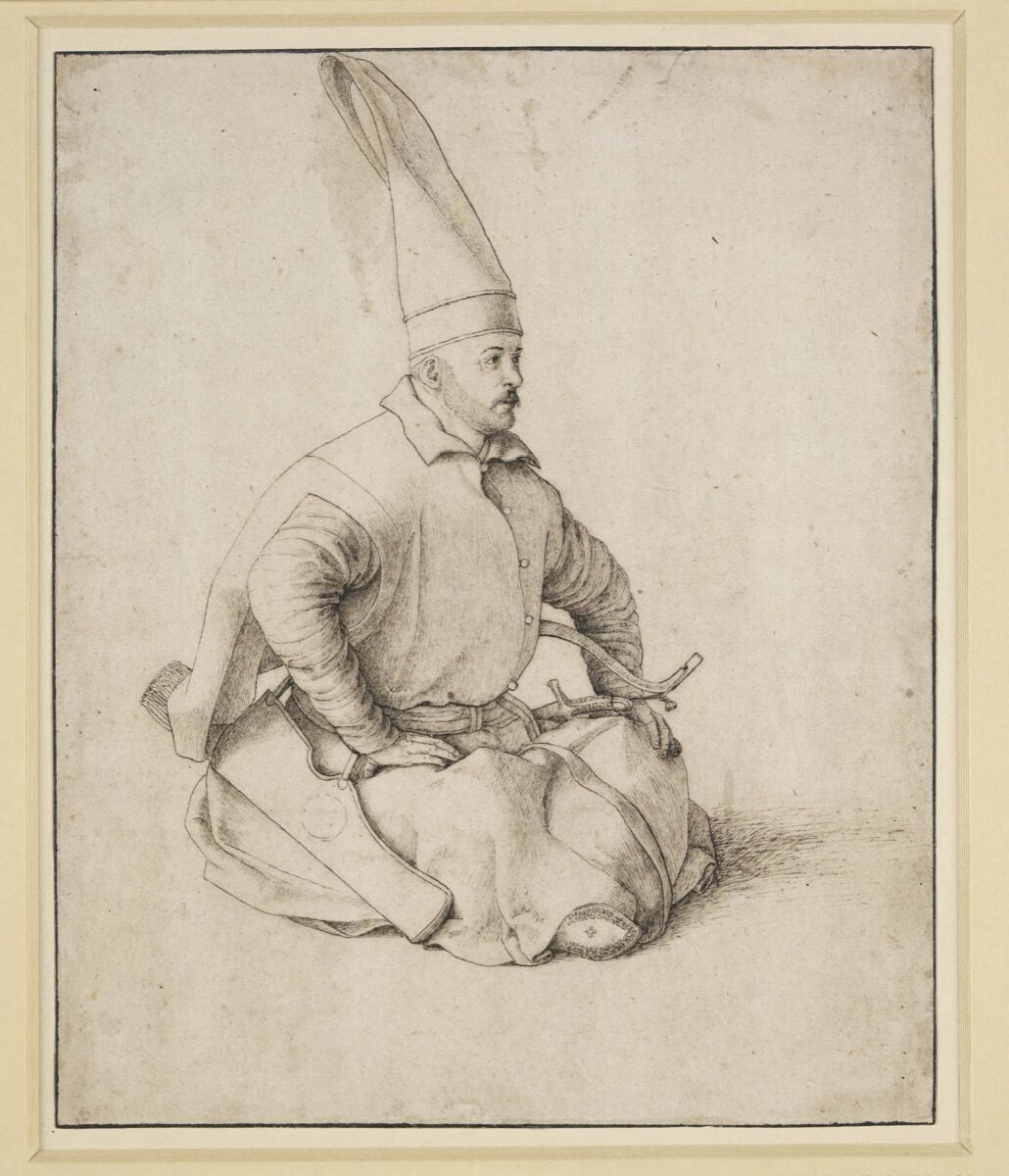 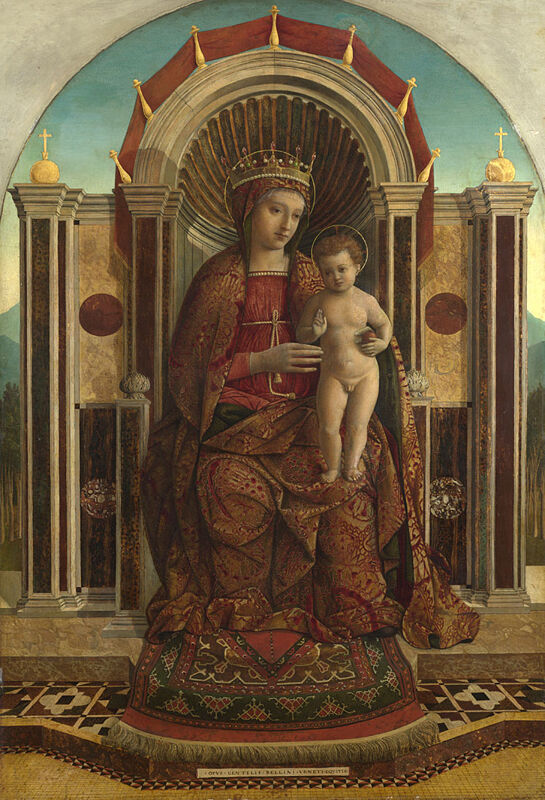 Gentile Bellini, The Virgin and Child Enthroned, about 1475-85. Courtesy of the National Gallery, London.

A number of Bellini’s own paintings during this time were either set in the East or incorporated Eastern decoration. Note the Islamic prayer rug at Mary’s feet in his Virgin and Child Enthroned (ca. 1475–85). In St. Mark Preaching in St. Euphemia’s Square in Alexandria, Egypt (1504–07), which was completed by his brother Giovanni, a crowd of turbaned spectators stand among (anachronistic) minarets, the scene’s exoticism enhanced by the inclusion of a giraffe in the background. For these reasons, Gentile is considered a founder of the
Orientalist
tradition in Western painting.
Mehmet died only a few months after Bellini’s departure. Europe rejoiced: Church bells were rung and celebrations held. In Venice, the news proclaimed that “La Grande Aquila è morta!” (“The Great Eagle is dead!”) By the end of his reign, Mehmet’s ambitious rebuilding program had changed Istanbul into a thriving capital. However, he was succeeded by his son Bayezid II, a religious puritan who disapproved of his father’s international tastes. Bayezid dumped Bellini’s paintings and drawings at the bazaar, where Venetian merchants picked them up at cut-rate prices.
By the late 16th century, the Orientalist mode fell out of favor as Venice’s relationship to its Muslim neighbors became more complex. Venetian merchants continued trading in the eastern Mediterranean, but the Ottoman Empire’s aggressive navy made travel more precarious. As a result, Venetian artists began representing Muslim subjects in less sympathetic ways. Commonly depicted stereotypes included turbaned men as overly aggressive warriors or lowly performers.
Today, E.U.-Turkey relations have been more focused on the migrant crisis than on a possible common future. The story of Bellini’s sojourn therefore marks a rare moment of fruitful cross-cultural exchange in what has often been a sorry tale of xenophobia and religious intolerance between two great civilizations. The paintings, medals, and drawings Bellini completed in Istanbul, as well as those he made upon his return, serve as reminders of the benefits of border crossing and a time when artists could be central figures to diplomacy.
Julia Fiore
Related Stories