What You Need to Know about René Magritte

Who was René Magritte? 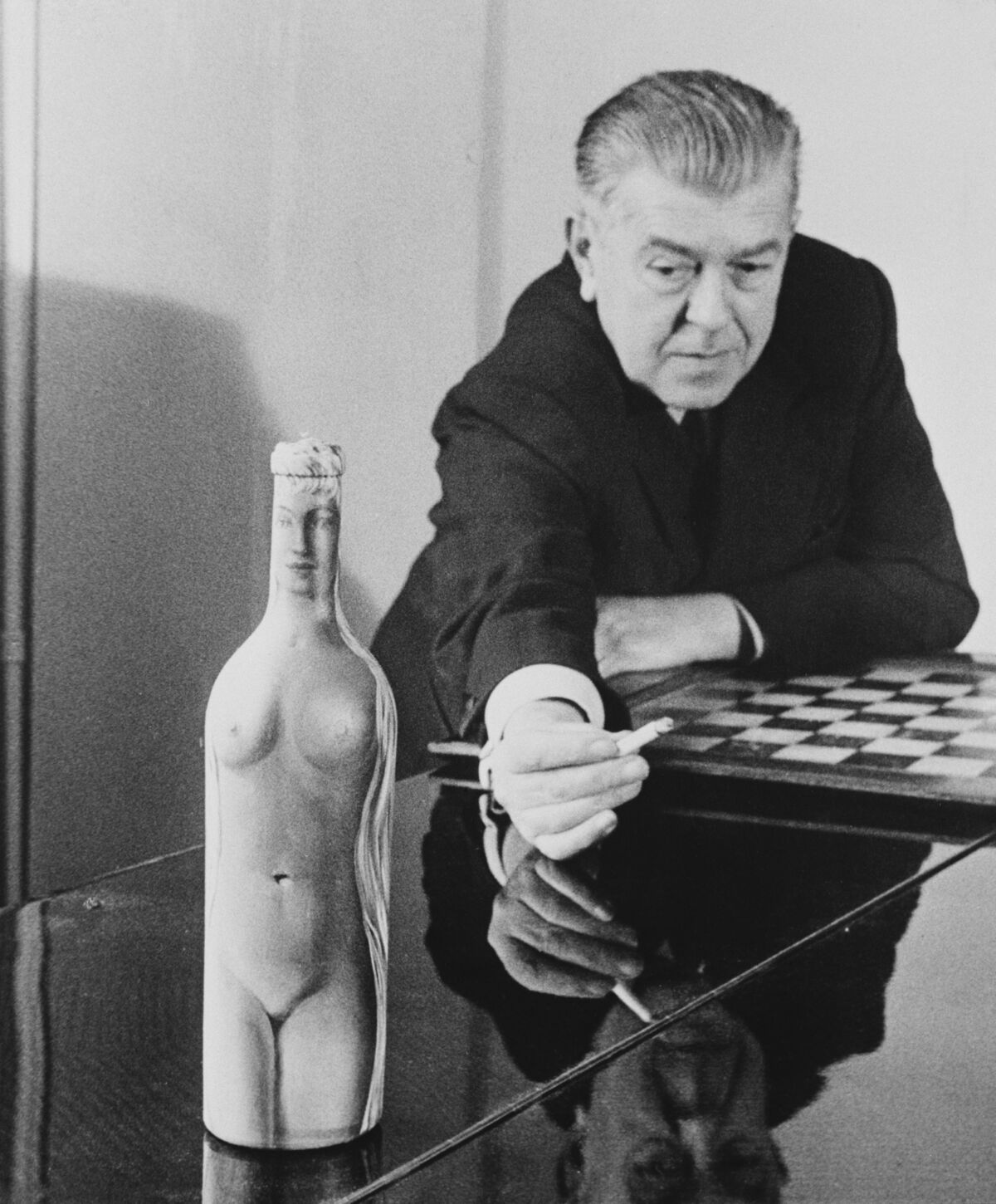 Like many of the
Surrealists
, the Belgian-born Magritte (1898–1967) experienced massive upheavals, living through both world wars. Yet personal tragedy struck even before the assassination of Archduke Franz Ferdinand initiated decades of European angst. When Magritte was 13, his mother Régina committed suicide by drowning herself in the Sambre River. When she was found, her nightgown was said to have been wrapped around her head—a fact often used to explain the cloth-covered visages abound in Magritte’s paintings. (Notably, Régina worked as a milliner before she was married, a detail difficult to decouple from her son’s recurrent hat fixation.)
If it was a morbid way to go, it also offered lyrical potential: Waterlogged women have long inspired major art (see: Ophelia). Writer Anne-Gaëlle Saliot posits that memories of the event pervade specific works by Magritte, including Reveries of a Solitary Walker (1926) and The Collective Invention (1934–35). In the latter, a creature that’s half-woman, half-fish lies on the beach at the tide’s edge. “The destruction of the human head is a direct indication of the horror of watery disfigurement, while at the same time calling up and destroying images of mythical mermaids,” writes Saliot. If many of Magritte’s images were alluring and fantastic, gruesomeness also seeped in. 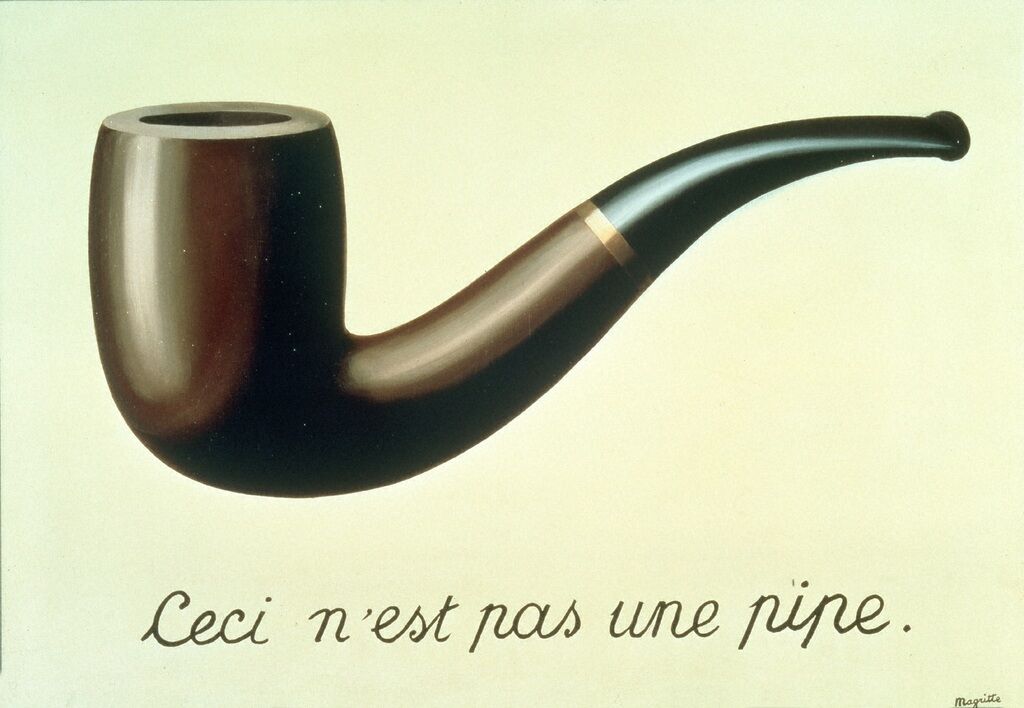 René Magritte
La Trahison des images (Ceci n’est pas une pipe), 1929
"René Magritte: La trahison des images" at Centre Pompidou, 2016
Advertisement
Magritte began his artistic education early. He started drawing lessons in 1910, made his first paintings as an adolescent, and enrolled at the Académie Royale des Beaux-Arts in Brussels in 1916. He began his career painting abstractions. Six years later, in 1922, three major events shaped Magritte’s life and style: He married Georgette Berger, exhibited six paintings at the Antwerp Congress of Modern Art show, and viewed
Giorgio de Chirico
’s work for the first time. The Italian painter’s haunting, shadowy, symbol-laden scenes convinced Magritte to render his own psychological landscapes.
Though he began this work in Brussels, Magritte and Georgette moved to Paris in 1927 so he could integrate himself into Surrealist circles. His new milieu offered both inspiration and upset. Though he first thrilled at the ideas of writer and movement leader
André Breton
, they eventually became too dogmatic for him. Despite the Surrealists’ aversion to religion, Georgette once wore a necklace with a gold cross to a party, causing a disagreement between her husband and Breton. The couple returned to Brussels in 1930.
Magritte and Georgette never divorced, though adultery on both sides created additional turmoil for the artist. In the late 1930s, he had an affair with fellow Surrealist artist Sheila Legge, and enlisted his friend, Surrealist poet Paul Colinet, to distract his wife by keeping her company. The plan worked too well; they started sleeping together. Magritte eventually made amends with his wife, but fell out with Colinet, according to The Economist. 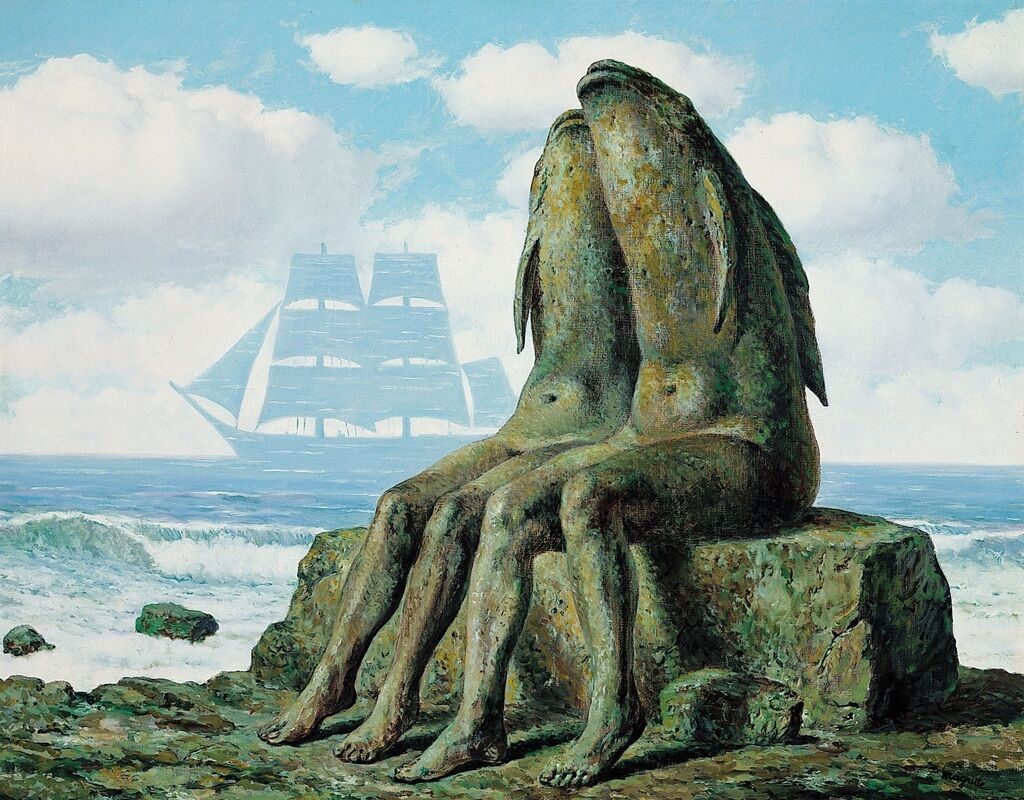 René Magritte
Les Merveilles de la nature, 1953
"René Magritte: La trahison des images" at Centre Pompidou, 2016
In 1945, Magritte joined the Belgian Communist Party. His political beliefs distinguished him from many of his Surrealist peers. “Magritte wanted revolution here and now, and he wanted it tied to both sunlit surrealism and to communism, on which Breton had firmly turned his back,” writes art historian Michel Draguet for a catalogue linked to “The Fifth Season,” a recently opened show at the San Francisco Museum of Modern Art. The exhibition focuses on the artist’s later work from the 1940s through the ’60s, which was cruder and harkened back to prior art movements (
Fauvism
,
Impressionism
) in a way that distinguished Magritte from his Parisian peers. The show’s eponymous canvas, from 1943, depicts two men who are themselves carrying landscape paintings. The metafictional element, the style—at first glance, one might confuse it for a
Renoir
—and the men’s dress (suits and bowler hats) help bring Magritte’s greatest themes and symbols together into a single canvas.
Magritte’s support for Communism also tied neatly to his love for the ubiquitous bowler hat (which was also a constant fixture of his own wardrobe). The accessory made him appear just like his fellow comrades—having the opposite effect of, say,
Salvador Dalí
’s hard-to-miss idiosyncratic mustache.
Nevertheless, Magritte received plenty of individual acclaim through his life, beginning around the 1930s. The Museum of Modern Art in New York gave him a retrospective in 1965, less than two years before he died of pancreatic cancer. “Outwardly his life has been uneventful, but the interior world of imagination revealed in his art has been varied and extraordinarily inventive and has won him a leading place among the fantasists of our time,” wrote curator James Thrall Soby in a catalogue essay for that show.

What were Magritte’s accomplishments beyond painting? 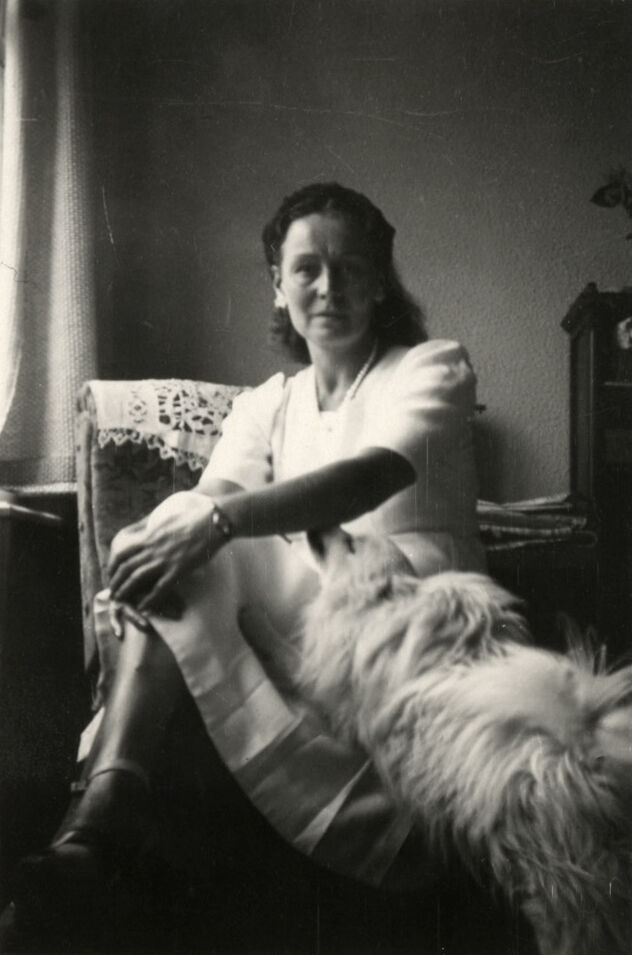 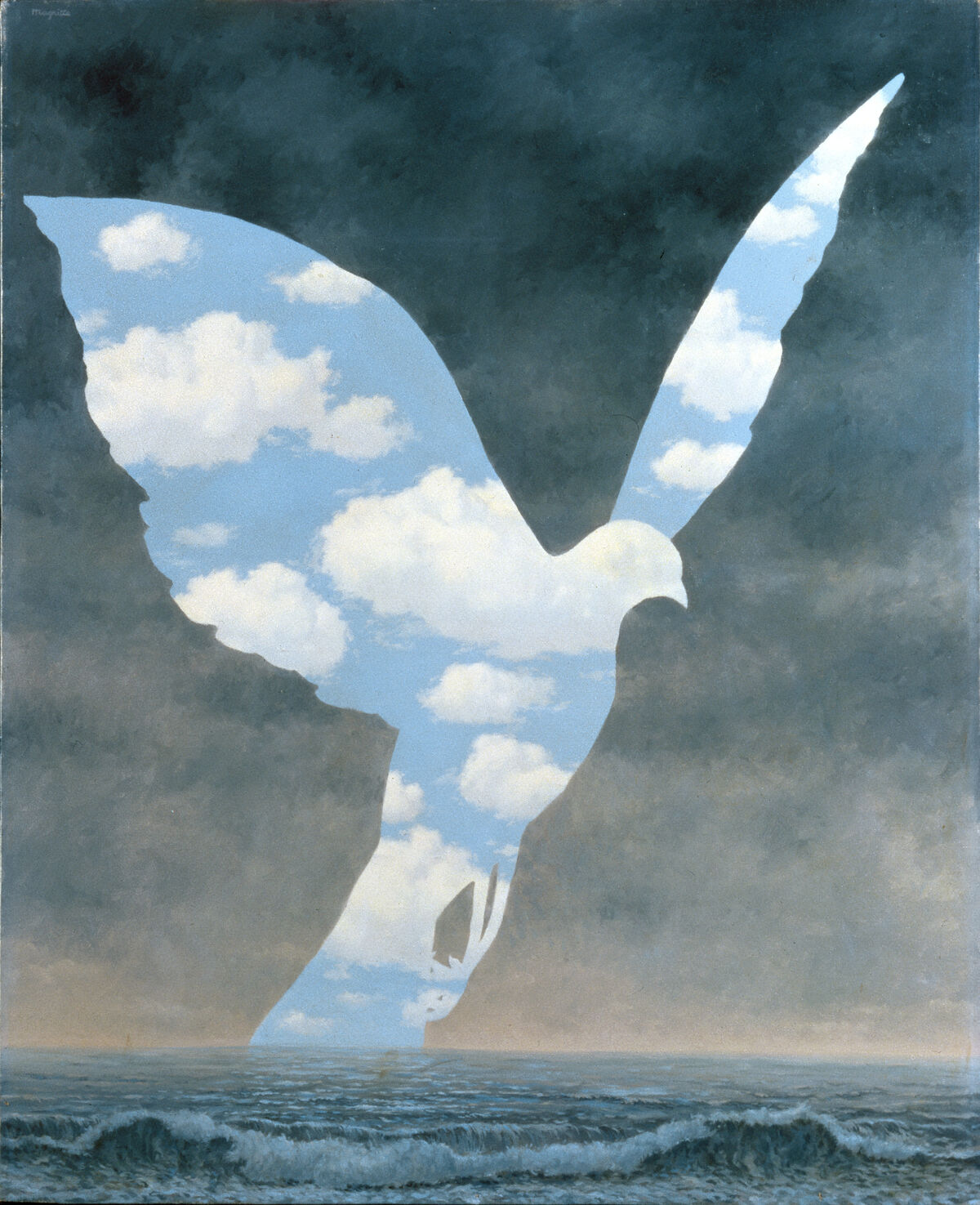 Like many Surrealists, Magritte was deeply engaged with literature. He created drawings for texts by poet Paul Éluard, fiction writer Georges Bataille, and the Marquis de Sade, the famed S&M chronicler.
Magritte also worked in advertising, designing ads for clients in industries from cars to fashion. As in his commercial design, Magritte employed a neat, flat finish in his art. Just decades afterwards,
Andy Warhol
would follow a similar trajectory, more clearly infusing his prints, paintings, and sculptures with evidence of his days as a commercial draftsman. Magritte also used his professional skills for political ends, making graphics and posters for the Belgian Communist Party.
Throughout the German occupation of Belgium during World War II, Magritte produced photographs and short films. Instead of thematizing the violence and fascism that infiltrated his country, the artist turned toward more pleasant sources of inspiration. “I live in a very disagreeable world, and my work is meant as a counter-offensive,” he once wrote. This quote, argues art historian Abigail Solomon-Godeau in her SFMOMA catalogue essay, is a bit disingenuous. “His statements need not mean that the war and occupation did not produce cultural or psychic symptoms in his oeuvre,” she writes, asserting that his work from this era was in actuality charmless: She sees plenty of “violence and disgust,” with references to “fecal, phallic, and castration imagery.” A counter-offensive, indeed. 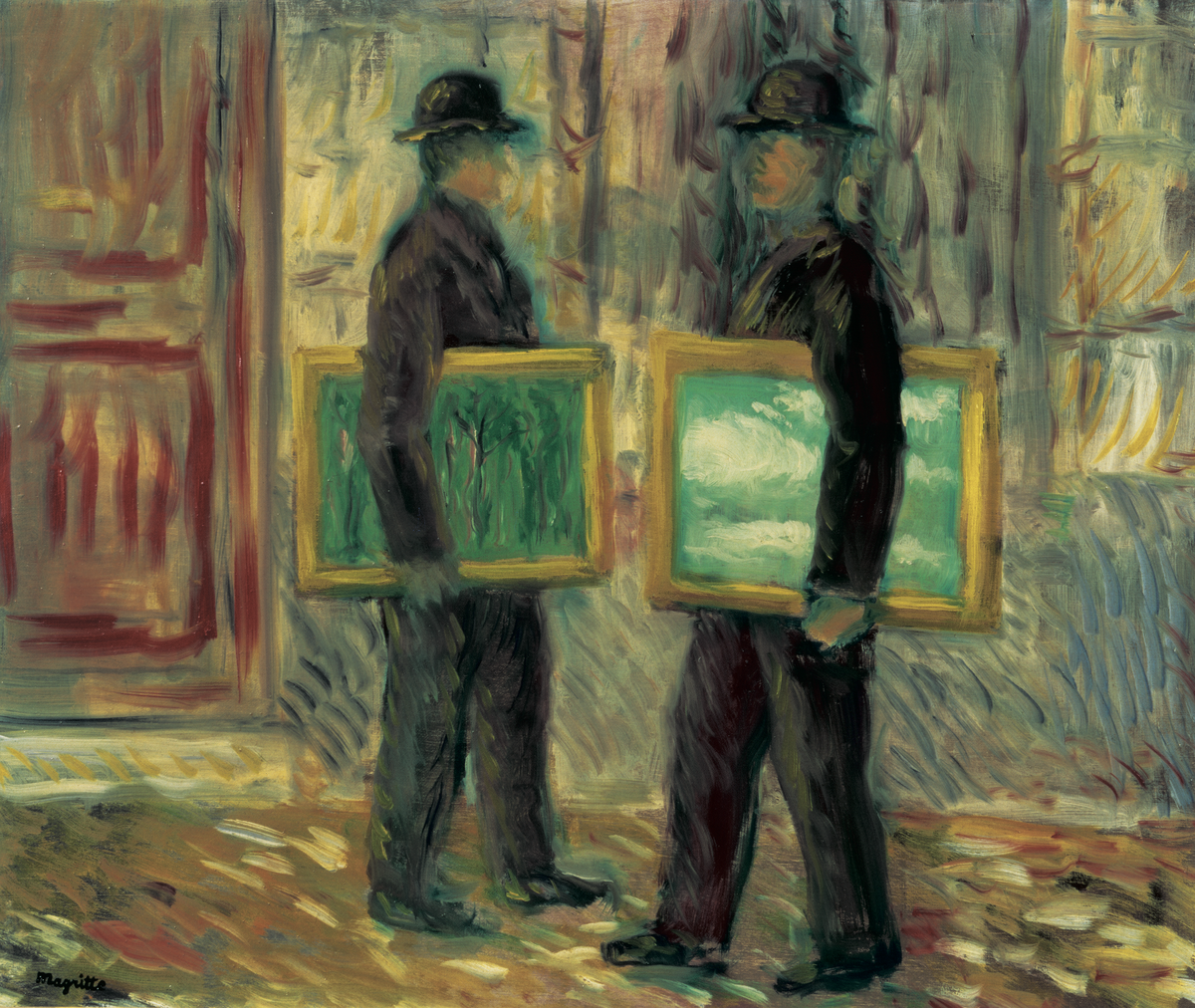 On the surface, Magritte’s moody and atmospheric paintings evoke an appealing sense of mystery and encourage an exploration of one’s own psyche.
His later work, however, offers different ideas. From 1943 to 1947, Magritte went through a “Renoir period,” and, around 1948, a so-called “vache period” (in French, the term means “cow”). During the former, Magritte adopted the brushy Impressionist style of
Auguste Renoir
; in the latter period, he painted in a Fauvist manner and used bright, unrealistic colors, suggesting the canvases of
Henri Matisse
and
André Derain
. Indeed, many of Magritte’s paintings from the 1940s look like they were cribbed from someone else’s oeuvre. There’s a cartoonish element to his vache compositions, as well; they fall into the framework of “bad painting,” an aesthetic that resonates today in the work of artists like
Philip Guston
and
Laura Owens
. 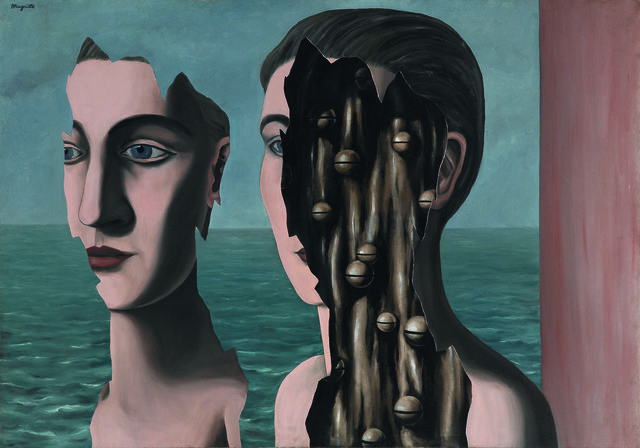 René Magritte
Le Double Secret, 1927
"René Magritte: La trahison des images" at Centre Pompidou, 2016
And, of course, there’s Magritte’s most famous work, which many will recognize even if they don’t know the artist’s name. La Trahison des images (Ceci n’est pas une pipe), from 1929, linked Magritte’s art to important philosophies of representation. The artist simply painted a brown-and-black tobacco pipe above words that, in English, mean “this is not a pipe.” The canvas highlights the fact that the viewer isn’t looking at a pipe, but a picture of a pipe. Far from a petty provocation, the distinction gets at the difference between art and reality. This became a major concern for the
Pictures Generation
in the 1970s and ’80s, who similarly highlighted the fictions evident in photography: Snapshots weren’t representations of truth, but of an artist’s contrived viewpoints.
As curator Caitlin Haskell writes in the SFMOMA catalogue, “Magritte, more than any other artist of the past century, made it his project to subvert our faith in visual similitude.” He lived through violent periods that inspired many Europeans to question their governments, religion, and human decency; his artwork similarly asks viewers to reevaluate their acceptance of what they see. As rapidly improving technology amplifies our ability to realistically distort images, it’s more important than ever to consider what is a pipe, and what’s not.
Alina Cohen
Related Stories