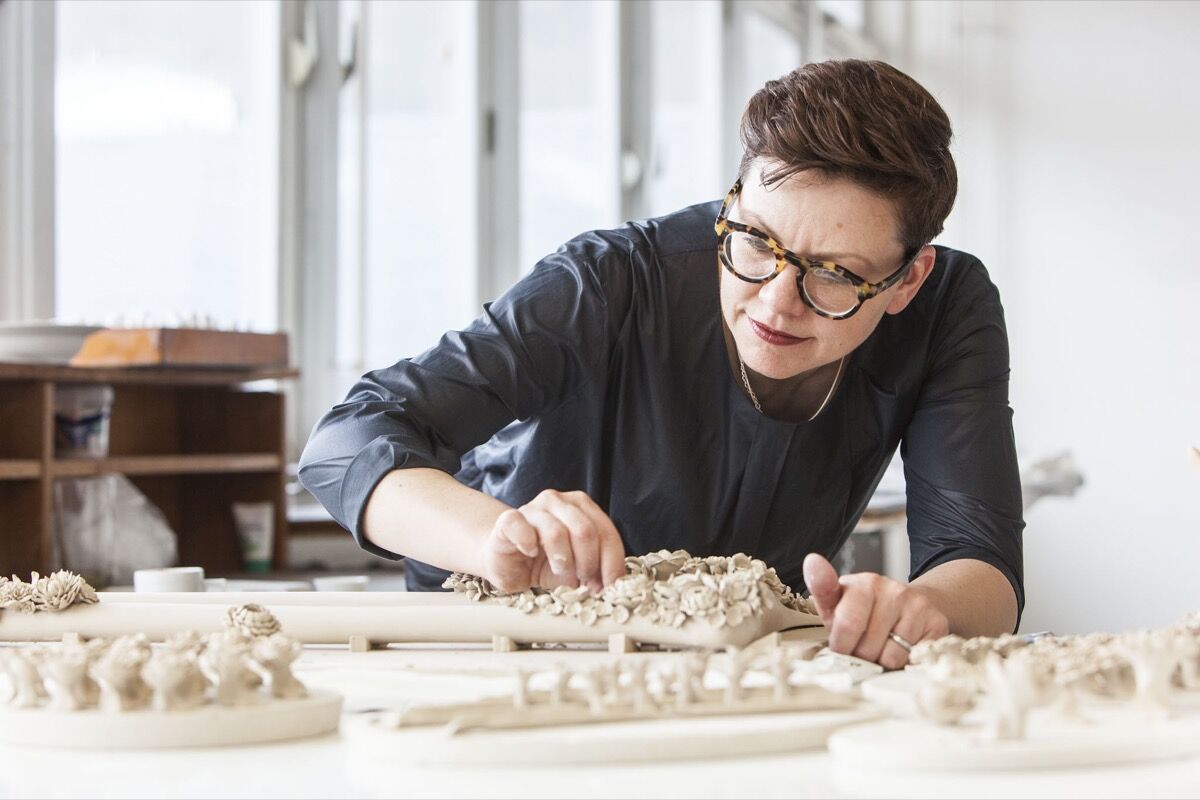 When New York-based artist
Jen Ray
first toured the Meissen porcelain manufactory in Talstrasse, Germany, she was stunned by one of the company’s trained artisans. He was painting an impossibly intricate design on a porcelain watch face, using a single hair as a brush.
“He said, ‘I do it between breaths and heartbeats,’ ” Ray recalls. “When I heard that, I thought, ‘I’m sold. I am definitely coming back here.’” Shortly thereafter, Ray became an artist in residence at Meissen. She had never worked with porcelain before.
Meissen is Europe’s oldest porcelain manufacturer, famous for its fine dishes and figurines. But in recent years, the company has charted a new direction. Since 2010, it’s run Meissen Art Campus, a funded artist residency program. The goals are twofold: Allow the artists to create new works and explore a new medium, and make Meissen—which has historically fallen squarely in the realm of decorative arts—visible in the contemporary art world.
“There’s a lot more that you can do with porcelain, beyond tableware and figurines,” says Claudia Gulden, project manager at the Meissen Art Campus. “That’s what we’re trying to show with the residency. And also, we want to bring contemporary influence into the company as a whole, so we can appeal to a younger generation of collectors.” 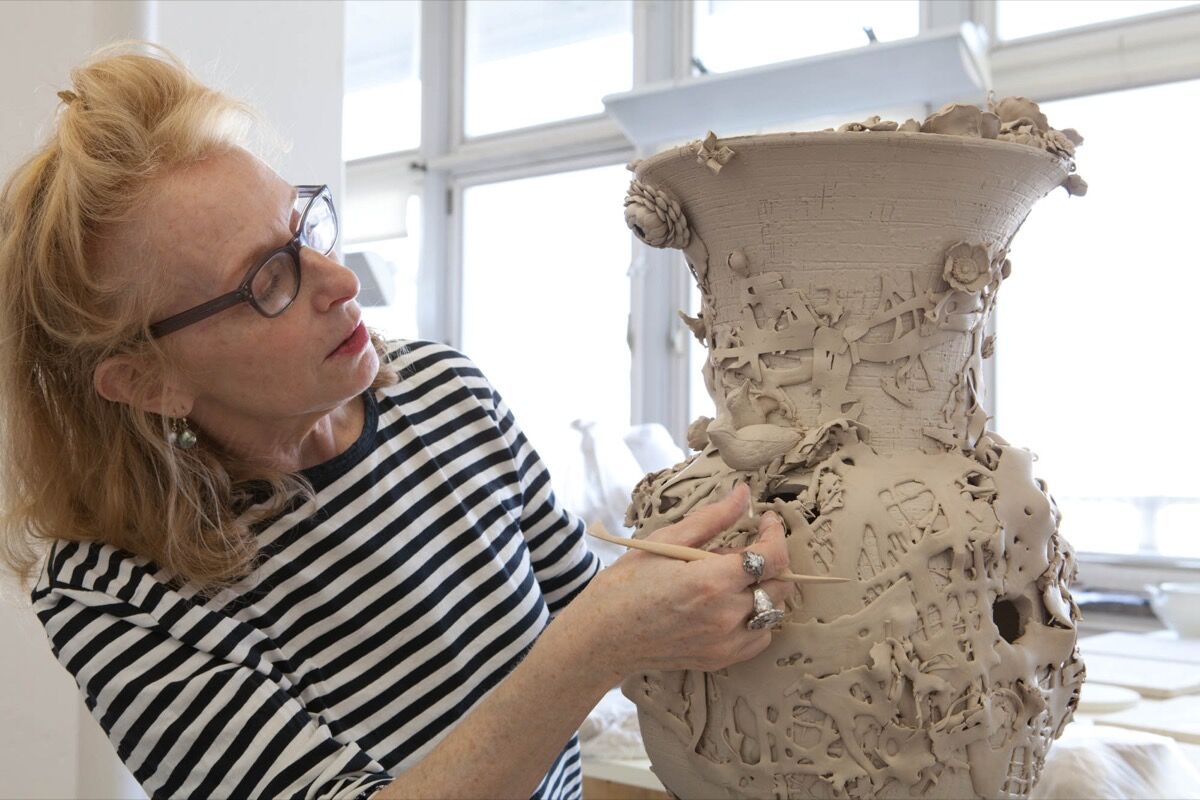 Last year, the residency had a moment when sculptor
Arlene Shechet’s
work from her time at Meissen went on display at the Frick Collection in New York (the yearlong exhibition ended this past April). Shechet was the first contemporary artist to have her work shown in that museum. And fittingly, the show uniquely paired Shechet’s works with traditional Meissen pieces she selected from the Frick’s Arnhold Collection—one of the largest and most important Meissen collections in the world.
Also in New York last year, fellow former Meissen resident
Chris Antemann
had an exhibition of her porcelain works, titled “Forbidden Fruit,” at the Museum of Arts and Design beginning in September 2016.
Porcelain is a unique material, unlike any other ceramic: It has a brilliant whiteness, a remarkable hardness after firing, and an extraordinary gloss when glazed. The material was invented in China roughly a millennium ago. Once Europeans discovered it, as early as the 13th century, it became a status symbol. It was imported to Europe from China at enormous cost, and developed the nickname of “white gold.”
Europeans scrambled to replicate porcelain and produce their own, and finally in the 18th century they did. Augustus II, Elector of Saxony, commissioned an alchemist and a mathematician to investigate how porcelain was made. The two men were the first Europeans to do so successfully and thereafter, Meissen Porcelain Manufactory opened in 1710, in Albrechtsburg Castle.
Though it’s now in a different location, Meissen is still owned by the Free State of Saxony, in central east Germany, and it is considered a jewel of the region. The campus, which includes a museum of historic porcelain and a contemporary gallery, is located roughly 100 kilometers south of Leipzig and employs 650 people worldwide. 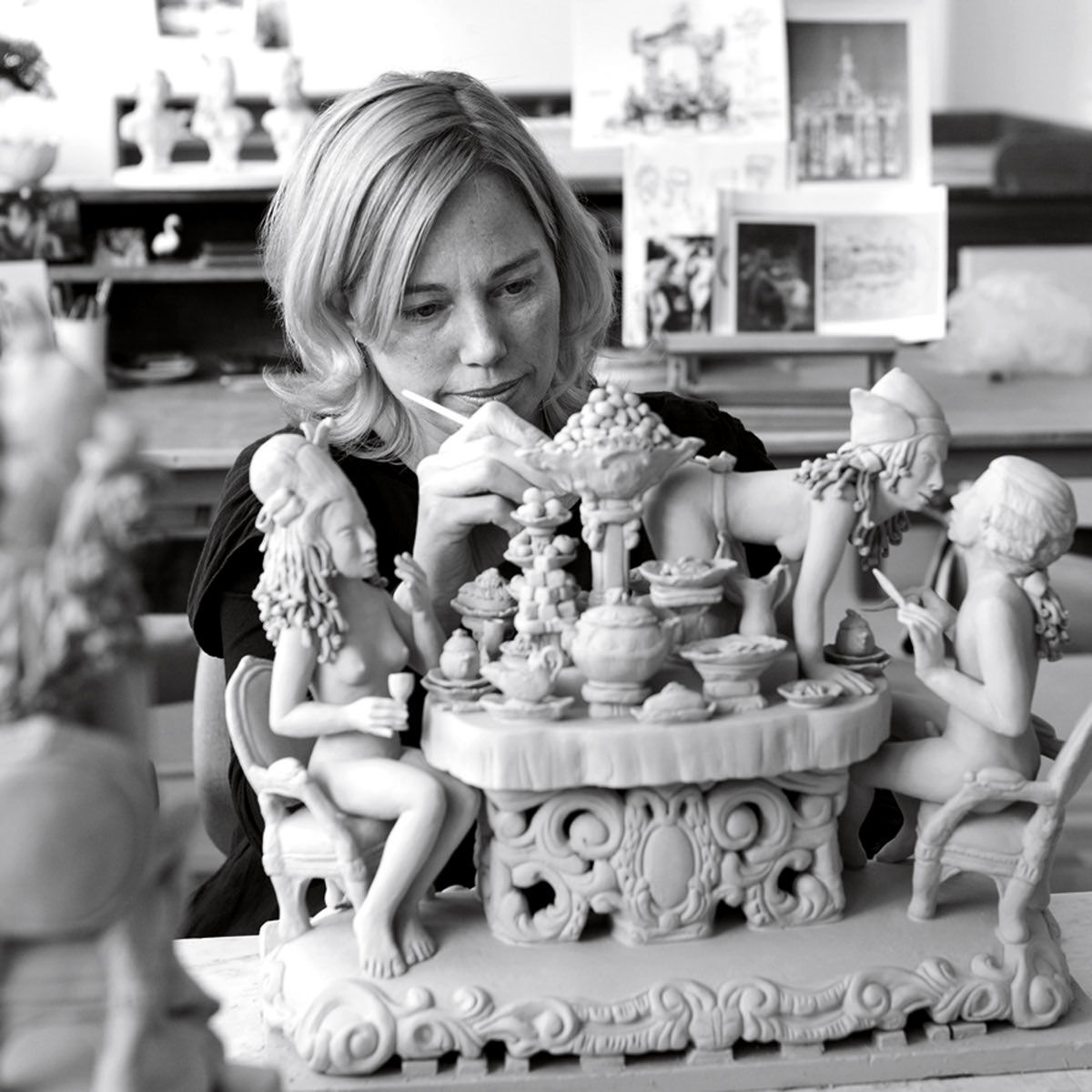 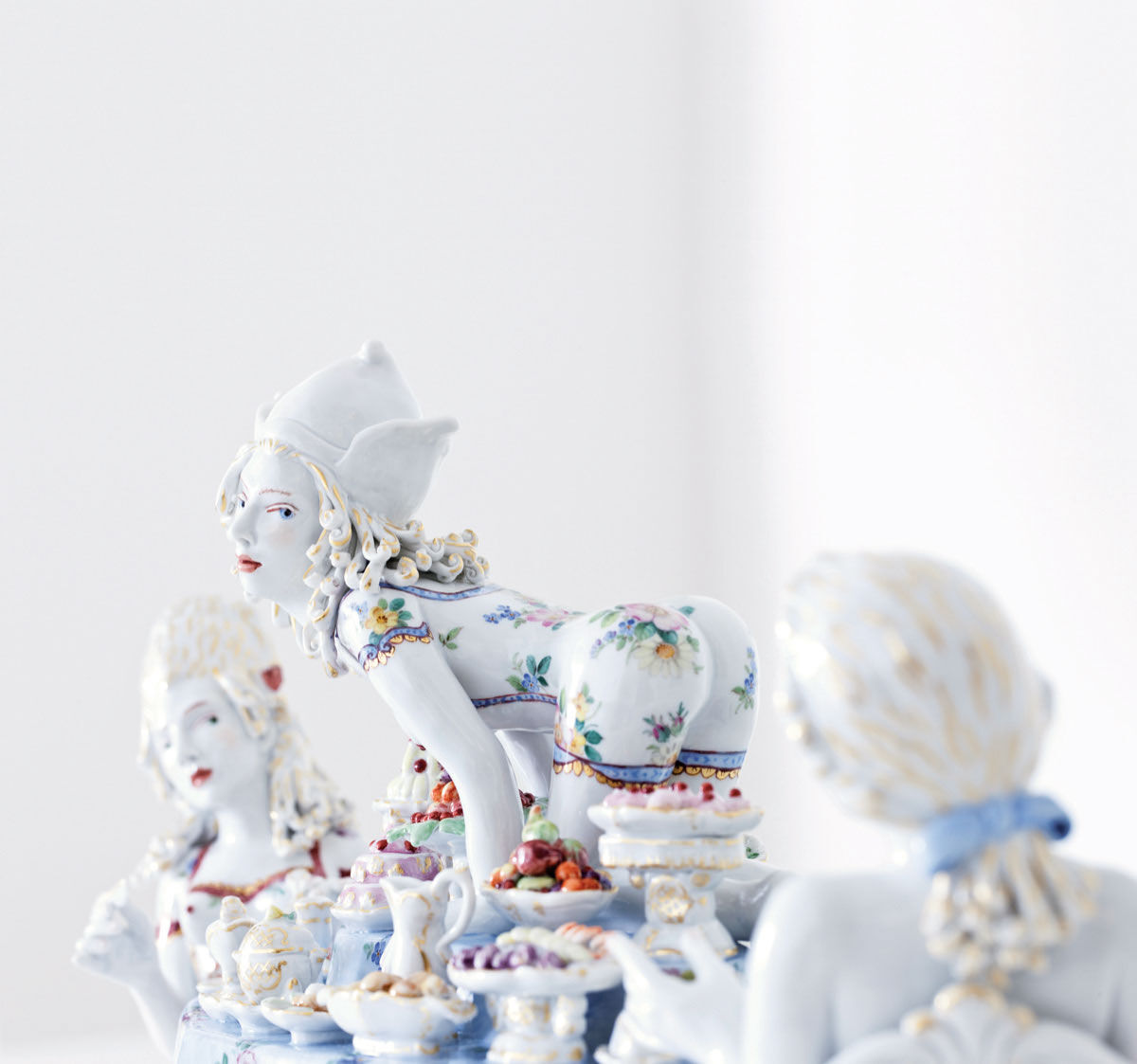 Advertisement
Meissen began collaborating with artists in the 1920s, when its general manager Max Adolf Pfeiffer brought in a group of artists “to bring new inspiration into the company,” Gulden explains. But the artists weren’t creating unique pieces; instead, they developed designs for tableware and figurines, which are still sold today. Later, from World War II through the Cold War, Meissen was behind the Iron Curtain, making collaboration with outside artists all but impossible.
In 2008, Meissen hired a new CEO, Dr. Christian Kurtzke, who initiated the artist residency program. He hoped the artists would served to bridge Meissen’s past—its 300 years of tradition and history—and its future. Rather than an application process, artists were invited to interview and tour the manufactory to inspire ideas. Upon entering the program, artists are given access to the facilities and master artisans, but little formal direction, leaving them free to shape the residency to their interests.
While artists are given this great freedom, they’re also presented with a great challenge: Porcelain is notoriously difficult to work with. “It’s like cream cheese,” says Antemann. “It’s slippery, and it breaks apart. It’s very hard to build without molds.”
The porcelain process is also slow. If an artist is simply painting on the porcelain, they can perhaps stay for just two weeks, Gulden says. But for sculptural works, a year would be a fast turnaround, even for something small. So, artists often have to visit the manufactory numerous times over a period of years.
According to Gulden, many artists work by creating molds from a clay model, and use them to shape the porcelain. Then it has to dry, which takes about two weeks (it also shrinks by 20 percent, something artists have to plan for). Then, there’s firing, glazing, and a second firing—which can draw out the process to around two months. And that’s before the piece can even be painted.
“People think we are just sleeping,” Gulden says with a laugh. “But the reality is that porcelain takes a lot of time.” 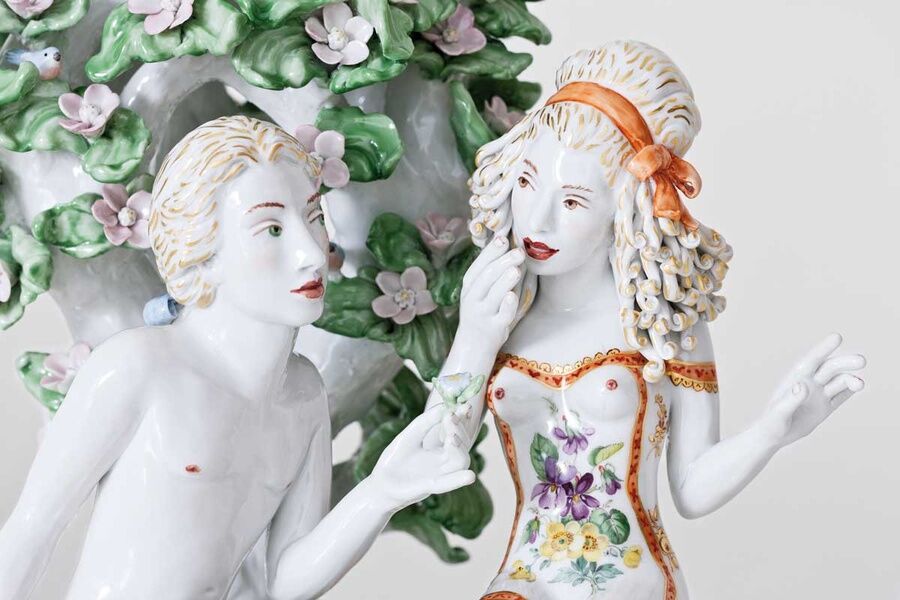 Antemann, who earned an MFA in ceramics, was familiar with the process before she started working with Meissen in 2011. She had previously worked with her own mixture of English-style bone porcelain. Long fascinated by the European tradition of porcelain figurines, she took cues from the work of
Johann Joachim Kändler
, Meissen’s most famous modeler.
Kändler began the figurine tradition when he had the idea to make collectible porcelain pieces based on forms that were cast in sugar for 18th-century banquets. Using the Garden of Eden as a metaphor, Antemann’s sexually suggestive figures riff on the excesses and temptations of 18th-century banquet culture, where alliances were formed and individuals showed off their power and wealth.
“My idea was to take the woman figure down from her pedestal and make her a participant in the party,” Antemann explains. She poses the male figures as the “plus one” and portrays them very simply, while the females are in roles of power, rejecting stereotypically coy relationships and the male gaze. Her approach is intentionally subversive: “As a woman in the male-dominated art world, I was often written off as making something cutesy and decorative.”
Ray, too, is using porcelain in a fresh, unexpected ways. Known for her paintings that depict Amazon warriors and performances that celebrate female strength, she started off painting porcelain at Meissen in 2012. “It was extremely difficult,” she recalls, “which of course I did not know before I got there. Every single piece they make there is hand-painted by these women who are incredible, highly trained experts. Frankly, I felt dilettantish compared to them.”
So, she decided to make something sculptural, even though she knew little about the process. She designed an axe, imagining a weapon that one of her Amazon characters would carry, covered in typical Meissen flowers. She made a mold of a store-bought axe, and used it to create porcelain axes, which she then covered with traditional flowers. “The artisans at the manufactory were bringing me these porcelain flowers they make, on platters,” she recalls. “Making the flowers takes them forever, and the application took me weeks.” The axes were recently shown (and sold) at Art Basel in Hong Kong. 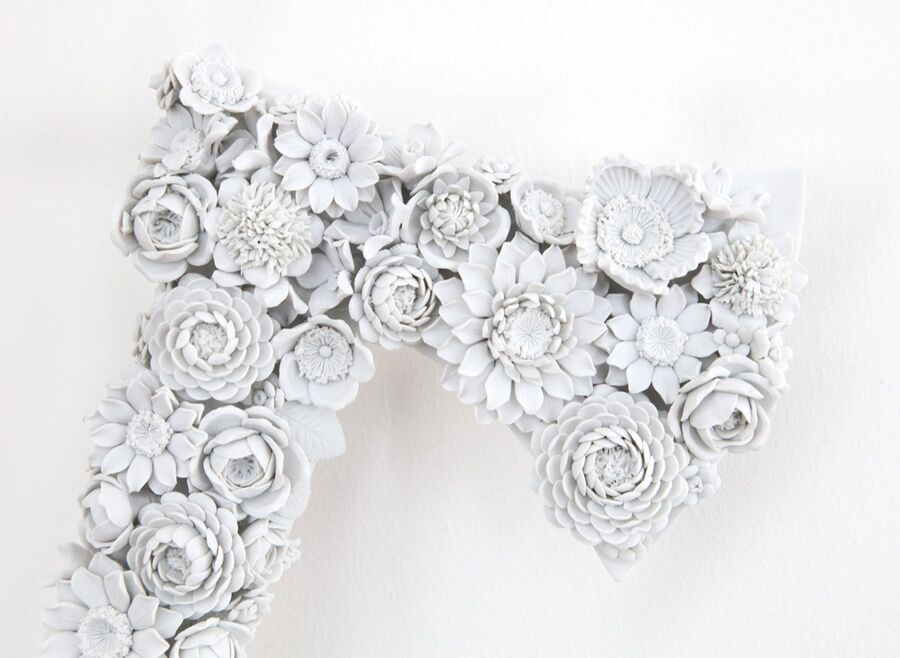 “I wanted to work as a team with the artisans at Meissen, and I became part of the family there,” says Ray. Meissen was the first residency she’d ever done; the residency experience had never appealed to her before. “The axes are so special to me. I just love them. I don’t talk that way about my other artwork.”
Both Antemann and Ray agree that the way the residency fosters opportunities to create new work is its greatest benefit. Antemann has formed a unique relationship with Meissen, creating, in addition to her unique pieces, limited-edition figurines that appeal to traditional porcelain collectors.
As far as Meissen’s visibility in the greater art world, “with the quality of their product, there’s no reason they can’t have a stake in it,” Ray offers. “They could do an excellent contemporary art show, with a curator’s text and everything. It’s probably time for that.”
—Liz Logan
Related Stories