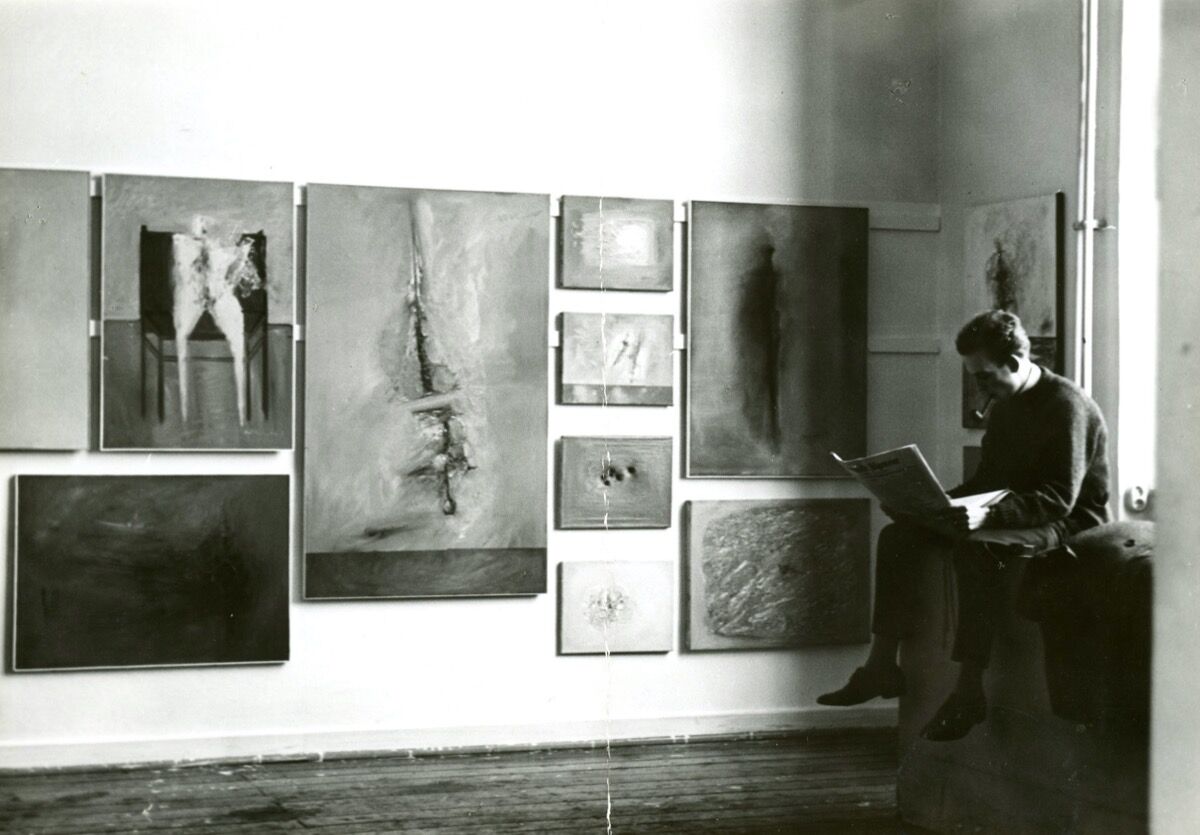 Gerhard Richter
returned to communist East Germany from a trip to Moscow and Leningrad in February 1961 with his mind made up to defect to the West.
Less than six months before the Berlin Wall was erected, it was still possible for East Germans to cross to West Berlin by train. He left his luggage at Berlin’s Zoo Station on his return from the Soviet Union and traveled back one last time to his hometown, Dresden, to pick up his wife Ema. He quickly sold his Trabant car.
A friend drove the couple to East Berlin. From there, they took the local S-Bahn train to West Berlin to begin new lives—with the 350 deutschmarks they each received as “welcome money” from the West German government. 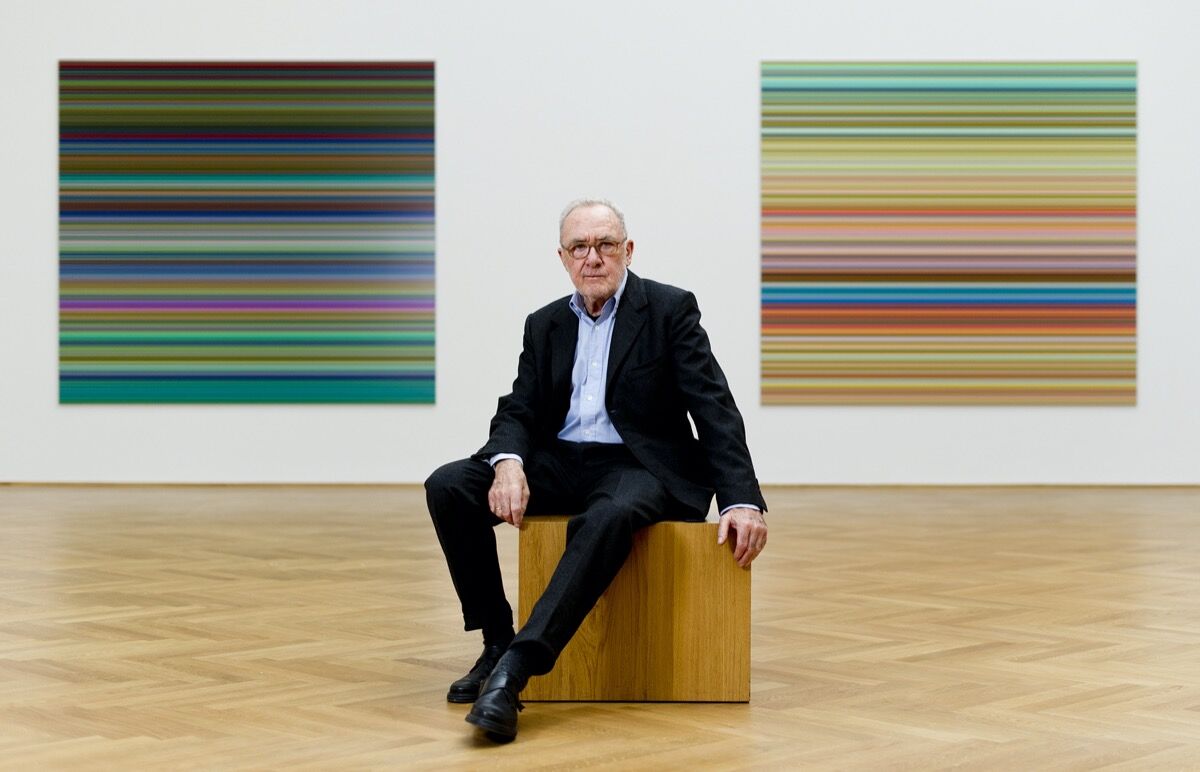 Now 88, Richter is one of the world’s most important living artists. A 2019 list of the wealthiest Germans ranked him 230th (tied with over 30 others), with a fortune of €700 million. But back then, Gerd Richter (as he called himself at the time) was completely unknown in West Germany, despite some early successes in Dresden. These hard first months west—during which Richter designed and built carnival floats and Ema sewed children’s clothes to earn their keep—are the subject of a small exhibition mounted by the Gerhard Richter Archive at the Albertinum in Dresden.
The first work in Richter’s meticulously catalogued oeuvre, titled Table, dates from 1962. He destroyed most of the paintings produced before Table in a fire in the courtyard of the Düsseldorf Art Academy.
But five paintings that predate the catalogue were spared, and they are on display in Dresden. “I believe these are the only works from that era that survived,” said Dietmar Elger, head of the Gerhard Richter Archive. As a result, scant research has been conducted into this formative chapter of Richter’s career, he said.
These early works give glimpses, with the privilege of hindsight, of the artist Richter would later become—even though he changed course and started afresh after the ceremonial bonfire. They show him oscillating between abstract and figurative work, as he has done throughout his career, and a willingness to experiment. His obsession with fastidious documentation is revealed in painstakingly assembled pages of photos of recent works that he sent to friends and in a minutely detailed floor plan of his new apartment. 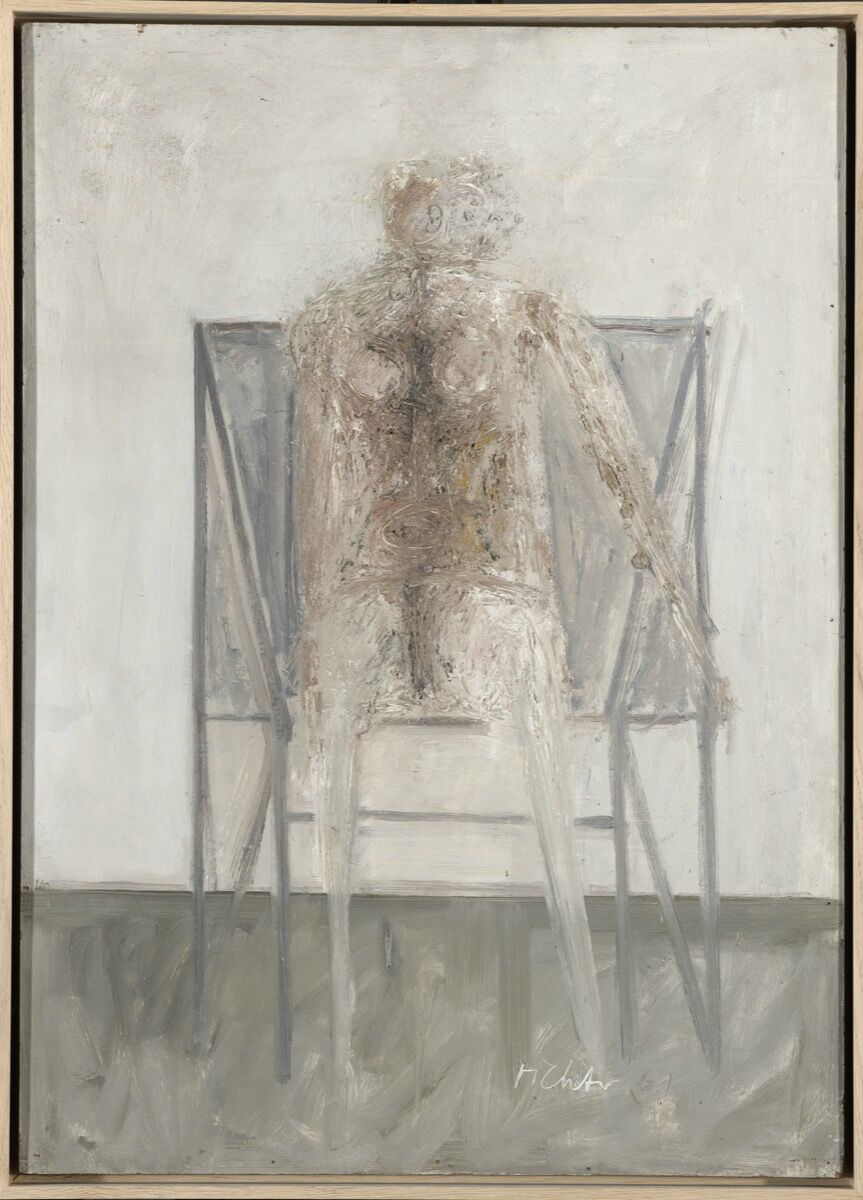 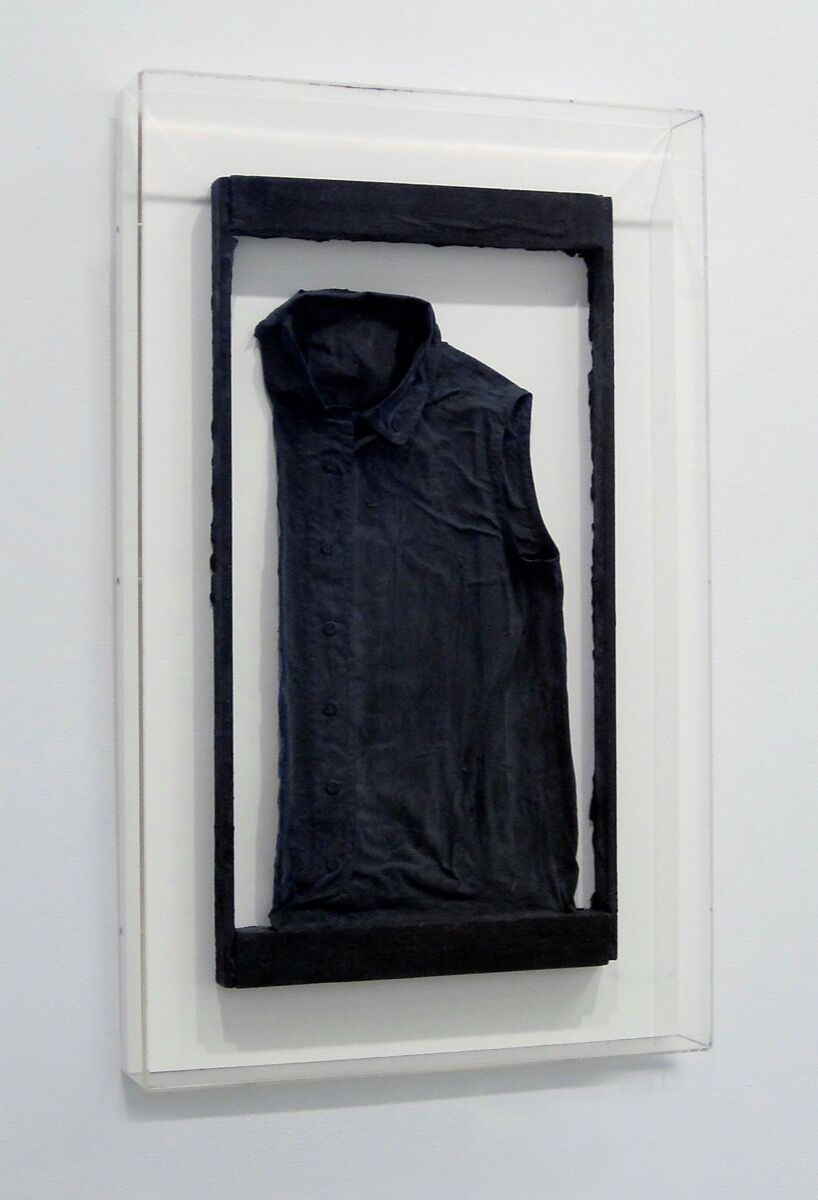 Advertisement
An October 1961 painting of a woman sitting is a more abstract, reduced variation of an earlier portrait of Ema reading. The following month, he began painting completely abstract works he called “spots.” Another work is a dyed blouse dipped in plaster. There is also an intriguing comic book he produced at that time, featuring a series of small silhouetted men wearing broad-brimmed hats, their adventures accompanied by cryptic texts.
Under East German law, Richter had committed the crime of “flight from the Republic.” The few possessions he left in Dresden were seized and sold by the East German authorities. His bed fetched 80 marks (the East German currency at the time), according to an official inventory in the show. A small shelf sold for two marks. Thirty-eight paintings fetched 117 marks.
Letters that Richter wrote to friends in Dresden on display in the exhibition give an insight into his state of mind, which “fluctuated between total defeat, euphoria and an ironic acceptance of his situation,” Elger said. The young artist often signed off with a resigned “Es ist, wie es ist,” or “It is, as it is,” and repeatedly wrote that he didn’t regret leaving, no matter how hard his new life was. 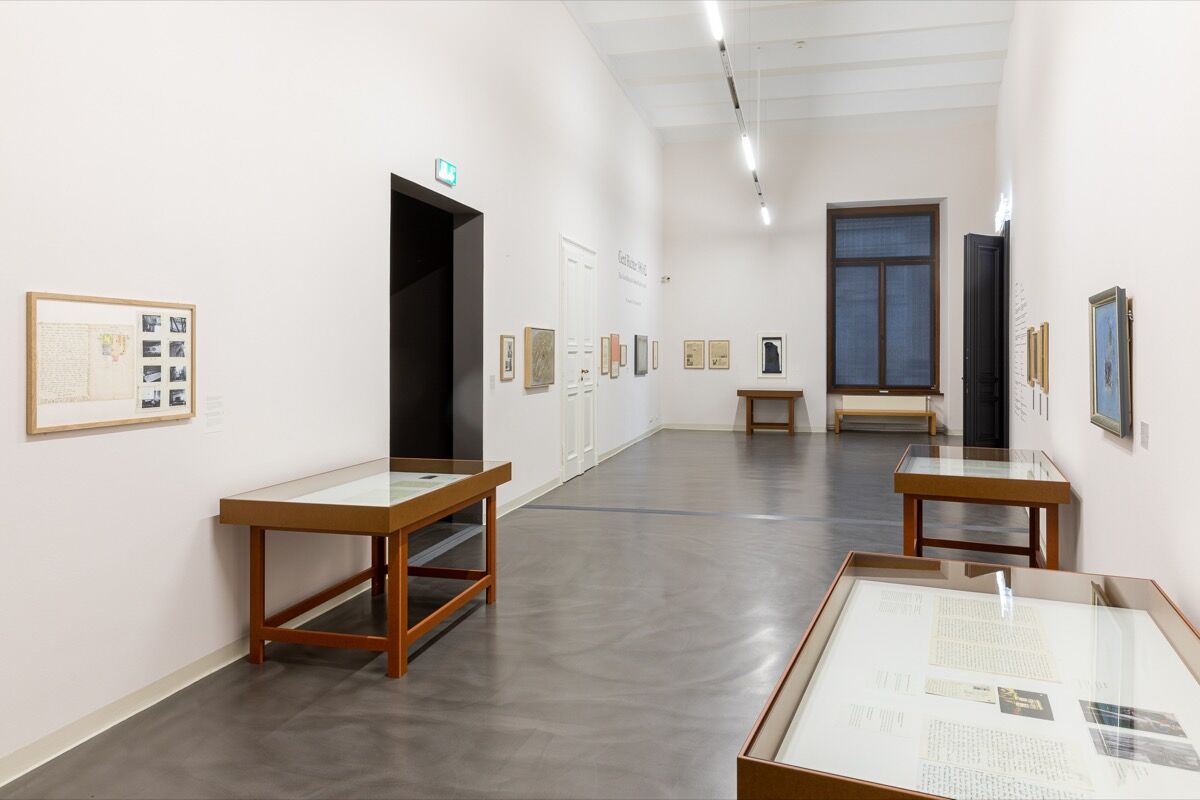 One letter to his former professor Heinz Lohmar, dated April 6, 1961, was clearly particularly difficult to write. Lohmar, who was Jewish, had fled Nazi Germany and returned after World War II, choosing to settle in the Soviet-occupied East. Richter tried to explain his decision to flee to Lohmar, a committed Communist.
“The reasons are primarily professional,” Richter wrote. “If I say that the artistic aspirations and the entire cultural ‘climate’ here in the West have more to offer me and are more compatible with my way of being and working than those in the East, then I will have indicated the main reason.”
Later in life, the artist said that a visit to Documenta 2 in Kassel in 1959—where he had seen works by
Lucio Fontana
and
Jackson Pollock
—was the “real reason” he had fled. He was aware that such experimental abstract work would never be officially exhibited in East Germany, where only figurative art met official approval, and found the paintings he was producing there “increasingly more mannered and inhibited.” But he didn’t want to work in obscurity. 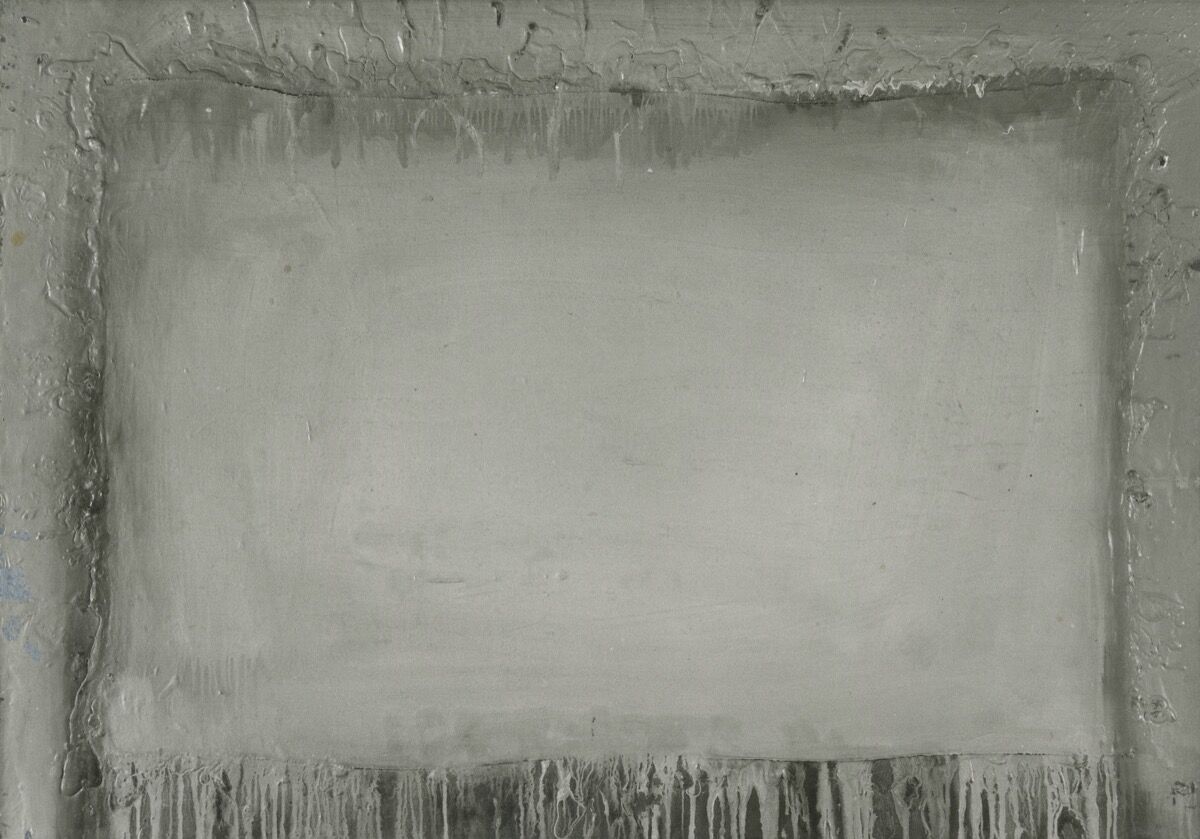 Richter began his time as a student at the Düsseldorf Art Academy in October 1961 and received a modest grant as a “refugee from the Eastern zone.” A letter to his friend Wieland Förster reveals that he was initially appalled by the academy.
“The studio at the school is too full and too disorderly,” wrote Richter. The students, he complained, “are lazy, stupid guys; they barely show up before 11, paint bad pictures, and whistle while they’re painting.”
His own workspace was always the tidiest, he wrote. “I was surely not made for this profession. Order, routine, security, dogma—these are the desires that recur constantly in my dreams.”
In September 1962, Richter was invited to take part in an exhibition in Fulda, a small town northeast of Frankfurt, but only because another show had to be postponed and something was needed to fill the gap. He sold nothing, but was pleased that the show stirred controversy in the local press. “Criticism favorable, because some of it was nasty and indignant,” he wrote to his friends Helmut and Erika Heinze. 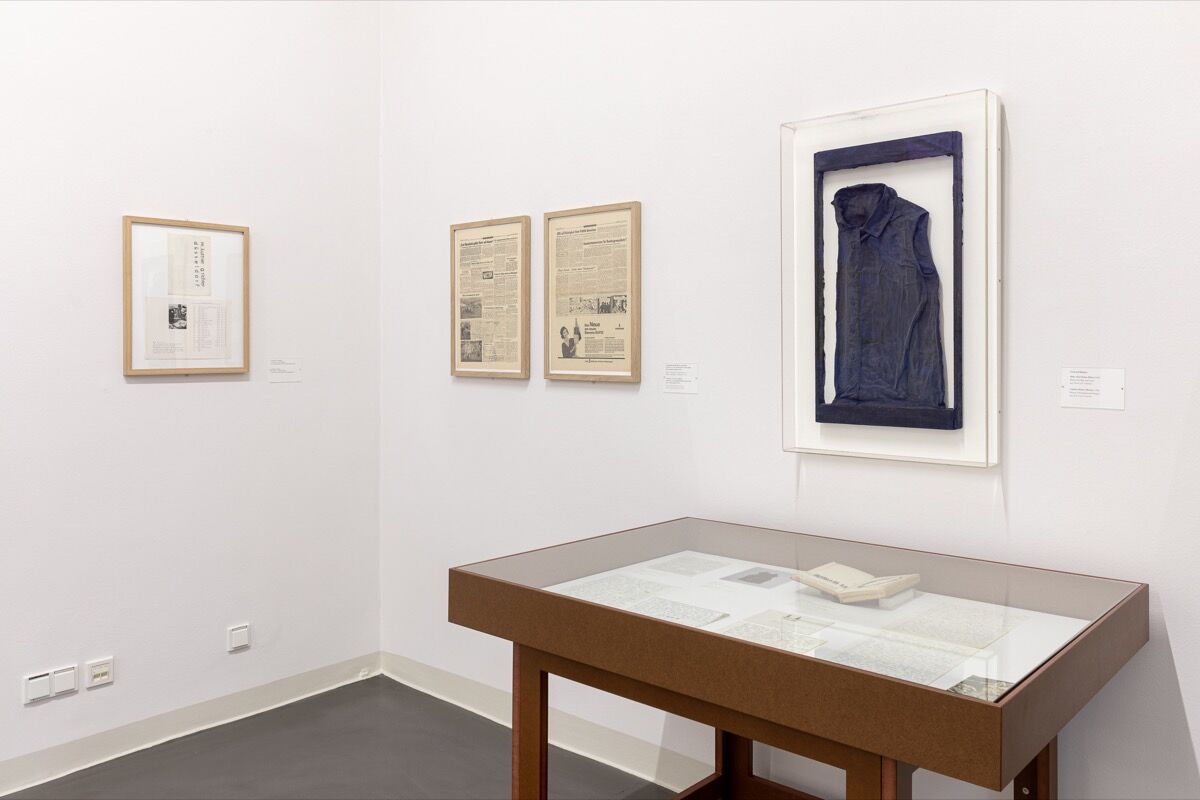 The exhibition prompted him to start afresh; the bonfire at the Art Academy took place shortly afterwards and consumed most of the work he had shown there. It also liberated him.
In the following months, Richter began painting images from photographs in newspapers and glossy magazines, producing the works that first made his name and are still among his best known today. Between 1964 and 1965, his first gallery shows opened in Berlin, Munich, Wuppertal, and Düsseldorf, and he sold several paintings. Life started to look up.
But Richter has said he doesn’t regret the early struggles and failures that led to his decision to burn almost all his works and start anew. He asked Elger in a 2018 conversation: “Who knows what would have become of me had I succeeded with those paintings?”
Catherine Hickley
Related Stories