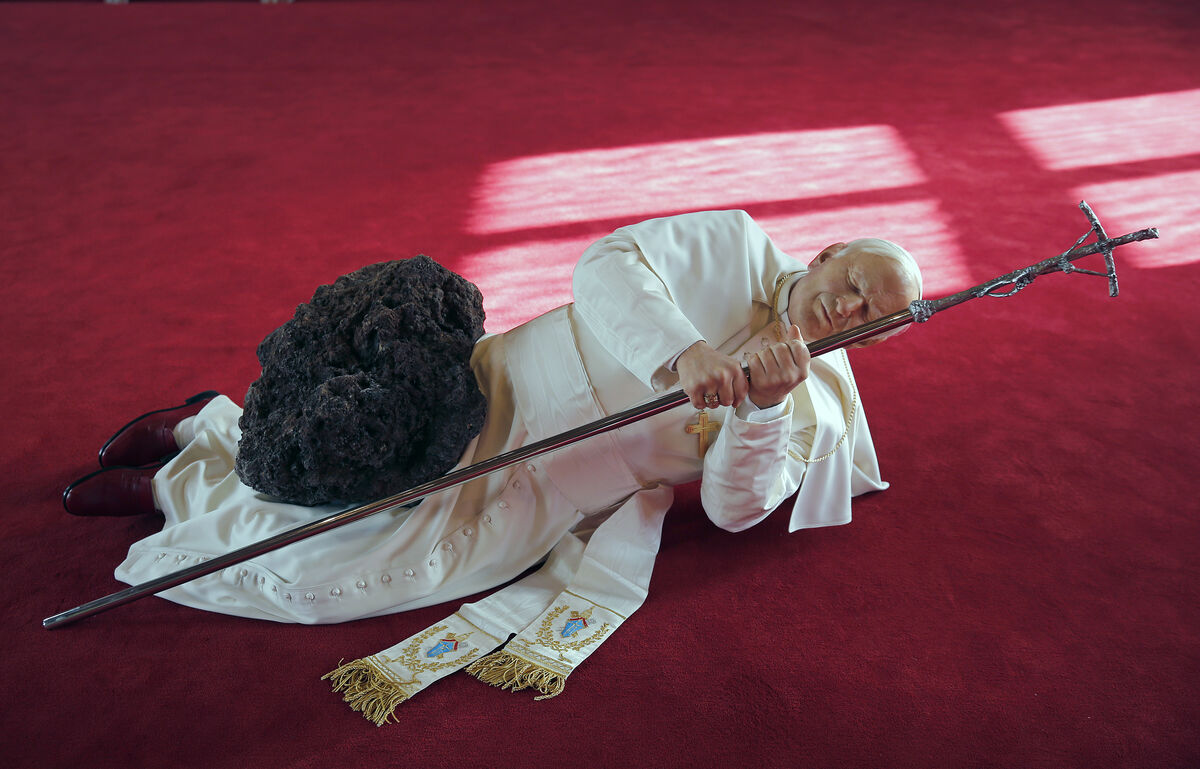 The Italian artist
Maurizio Cattelan
has made a career out of creating sculptures that are comedic, disturbing, and far from subtle. Case in point: his controversial work La Nona Hora (1999), which depicts a berobed Pope John Paul II, moments after being knocked over by an errant meteorite. We see the pontiff collapsed on a red carpet, with broken glass nearby suggesting the preclude to the tragic accident. The Pope winces slightly, still clutching a ceremonial staff, his rigid body composed of polyester resin. He doesn’t appear to be dead exactly, just merely inconvenienced. One could be forgiven for thinking that his discomfort comes from a case of heartburn, rather than a hunk of rock careening down from space.
While the subject matter of La Nona Hora is almost cartoonish in its simplicity, the sculpture—like many of Cattelan’s works—is complex, if not maddening. Initially, the artist tackled the subject of Pope John Paul II in a very different manner: more serious, less slapstick. “In the beginning, he was supposed to be standing, with the crucifix in his hands,” Cattelan toldSculpture magazine in 2005. “When it was finished and I stood in front of it, I felt as if something was missing, that the piece was not complete. What it needed was very simple: It lacked drama and the capacity to convey the feeling of being in front of something extraordinary and powerful. It didn’t have the sense of failure and defeat.” 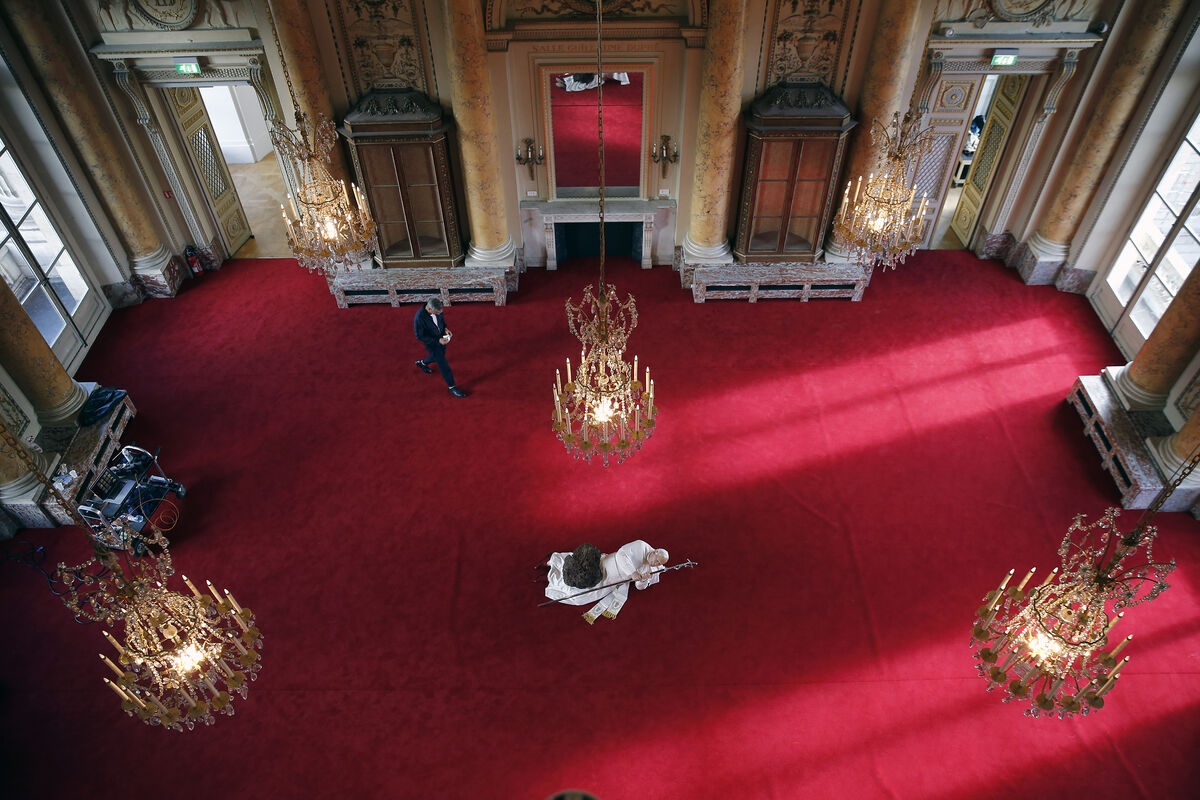 La Nona Ora seems designed to ruffle feathers—even non-believers might chaff at the fictional tableaux. But in the same interview, Cattelan stressed that “provocation” was not his goal. Nor was the idea to be “anti-Catholic, coming from me, who grew up singing in the church choir between saints and altar boys,” he added.
So is La Nona Ora an affront to the faithful? A sassy, sacrilegious sculpture? I decided to ask someone well-versed in religious artworks for their thoughts, Melanie Holcomb, a curator in the department of Medieval Art and the Cloisters at the Metropolitan Museum of Art. “I’m not ready to definitively label the piece sacrilegious,” said Holcomb. “It’s an ambiguous work to be sure, harboring elements of humor, cruelty, and irreverence, but one can also read it as paying tribute to the power of forces and institutions larger than ourselves. There is of course the awesome power of the meteor, but I’m also struck by how the Pope and the cross he carries have survived undamaged. His face remains serene, his torso is square and the cross, unbent. In the medieval world, a miraculously preserved body was a sure indicator of saintliness.” In Holcomb’s reading of La Nona Ora, Cattelan might indeed be paying homage to Pope John Paul II; who else could suffer such a freak accident and take it in stride? 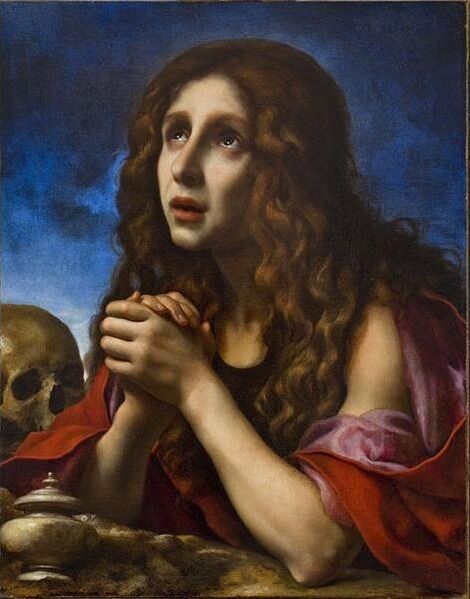 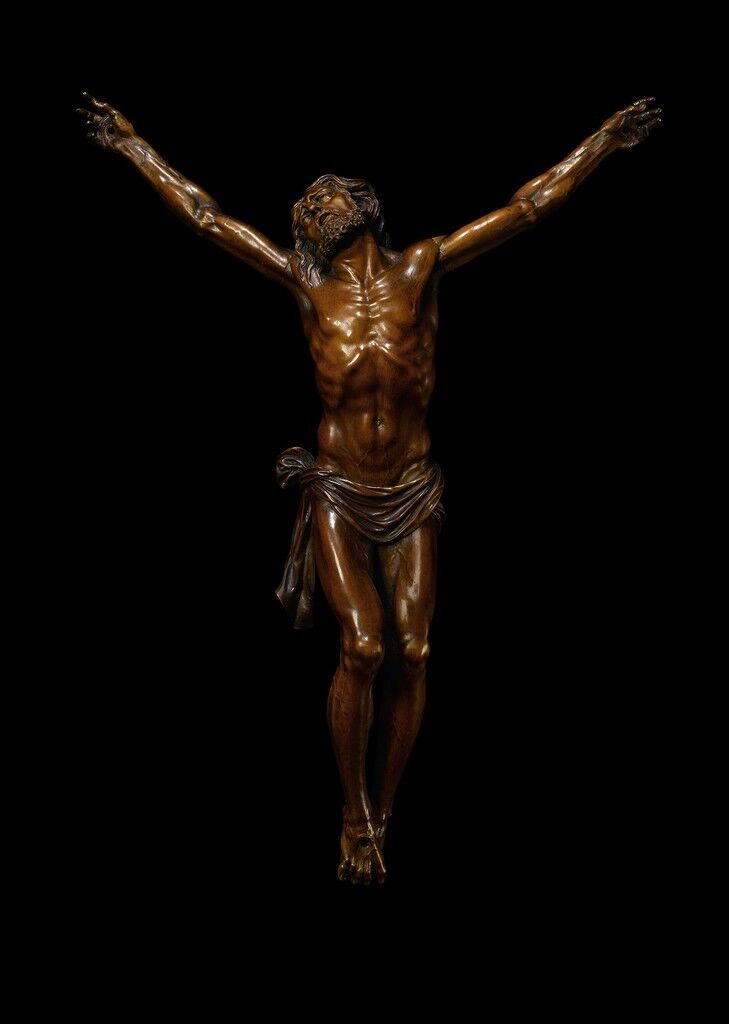 David Heschler, attributed to
Christ Crucified, 17th century
Blumka Gallery
Advertisement
Massimiliano Gioni, artistic director of the New Museum and a friend and past collaborator of Cattelan’s, has also thought about the issue of La Nona Ora’s relationship to religious faith. Typically, he said, he’s countered those accusations with the words of Luigi Pirandello: “Blasphemy activates the sacred.” He compares La Nona Ora to the work of transgressive French philosopher Georges Bataille, which he finds simultaneously “blasphemous and somewhat mystical.”
“Also, in Christianity and Roman Catholicism, there is nothing perhaps more sacred than suffering,” Gioni continued, “nothing more precious than revealing the humanity of the sacred, which La Nona Ora certainly does. In fact, reactions to the piece among Catholics have not been unanimously negative. For many commentators—also within the clergy—the piece stood as memento of the humanity and fragility of even the highest religious authority, and more broadly as a memento of the humanity of God.” 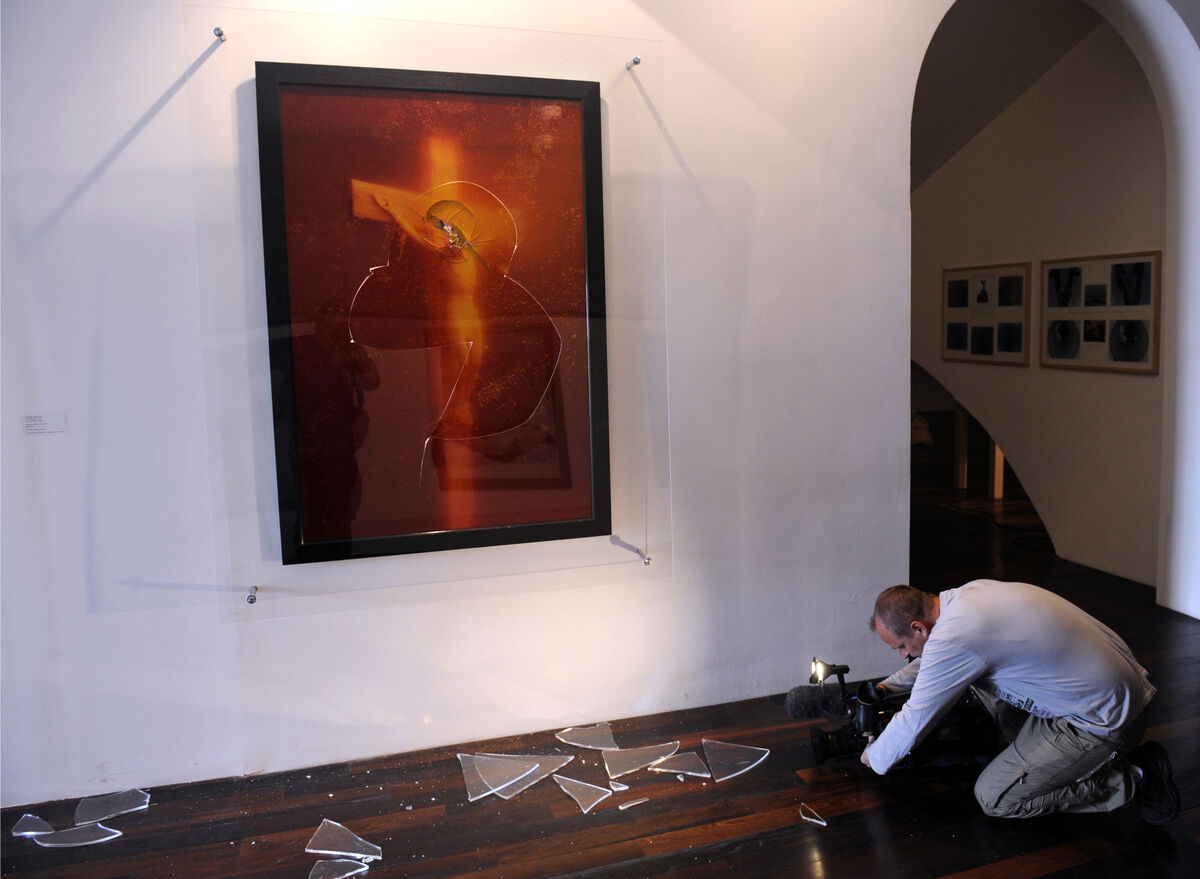 Despite this important nuance, one could argue that Cattelan would have guessed that his subject matter could incite an uproar not dissimilar to that of another apparently sacrilegious work created just over a decade before: Piss Christ (1987). The iconic photograph by
Andres Serrano
pictures a crucifix in urine. In that case, the artist, who is Catholic, also had his own interpretation of the work—but an angry public wasn’t always patient enough to hear it. 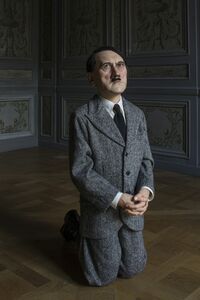 2 Images
View Slideshow
While La Nona Ora didn’t elicit the same degree of public outcry, some of the responses to Cattelan’s Pope were beautifully absurd. When it was exhibited at the Zachęta National Gallery of Art in Warsaw, Poland in 2000, a pair of politicians strong-armed themselves into the role of curators, and made their own attempt at “fixing” what they saw as a blasphemous work. The self-appointed censors “removed the rock from the pontiff and tried, according to some news reports, to stand it on its wax feet,” according to the New York Times. The nasty infighting that the sculpture provoked would eventually push the museum’s director out of her job.
Like much of Cattelan’s oeuvre—including Him (2001), a decidedly unnerving sculpture of Hitler, praying—La Nona Ora shows what visceral effects can be achieved when famous figures are placed in bizarre or fraught positions. (His influence in this regard is vast; consider the artist who recently combined a fast-food clown with sacred Christian iconography.) Cattelan is fairly press shy, and the interviews he does give tend to be elusive and playful. It’s ultimately hard to pin him down on the exact meaning of the Pope-hit-by-meteorite; perhaps the best we can do is argue amongst ourselves. “The duty of art is to ask questions,” Cattelan toldNumero. “And if you want a clearer answer, then you’re in the wrong place.” And regardless of what La Nona Ora means, it ultimately speaks a language that the Catholic church knows well: money. The sculpture earned over $3 million at auction, surpassing its high estimate of $2 million, back in 2004 at Phillips. Some would call it a miracle.
Scott Indrisek
Related Stories