In the heart of Reykjavík, particularly on the main shopping thoroughfare of Laugavegur, there’s an overwhelming emphasis on tourism. The city center has maxed out on its quota of street-level restaurants; souvenirs stores dedicated to plush puffins and Nordic sweaters are ubiquitous; and new hotels vie for prime real estate. And while the impetus behind Iceland’s popularity has much to do with its stunning, unique landscape (think: the Golden Circle), culture is an increasingly motivating factor. There is a rich and authentic, albeit very small, art scene that a core community of locals have built up in Reykjavík, and are running well, despite limited funding and patronage. Newest to the group is gallery BERG Contemporary, an ambitious international program and a vote of confidence for the future of contemporary art in Reykjavík.
Last week, the gallery opened its second exhibition, a show of paintings by Reykjavík-born artist
Hulda Stefánsdóttir
, during the launch of this year’s Reykjavík Arts Festival—the best time of year to see art in the city. Hundreds of guests filtered into the light-filled white cube, admiring the works, sipping drinks, and chatting with friends; it was a scene that could have taken place in any art-world capital. But the difference is that BERG Contemporary, which opened in March, is one of just four commercial galleries in the city. 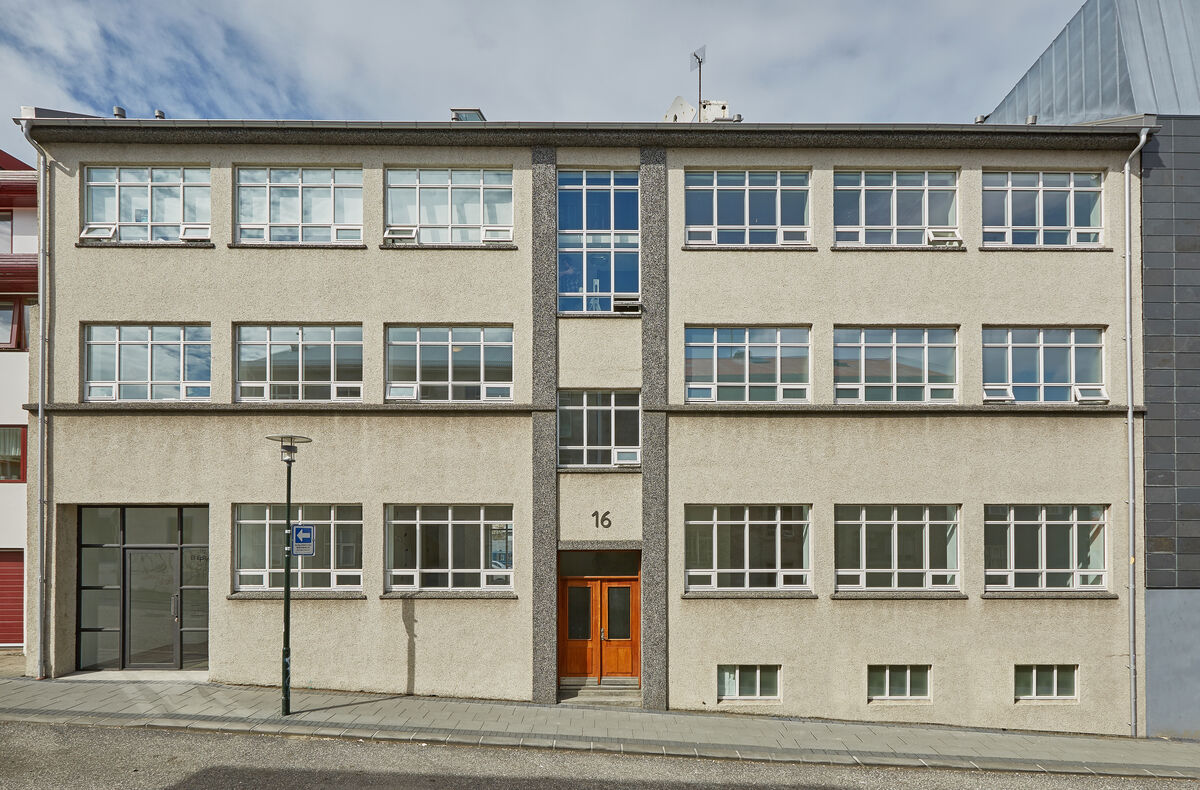 Exterior view of BERG Contemporary. Photo courtesy of the gallery.

“I like to influence the art scene here in Iceland,” Ingibjörg Jónsdóttir, director and owner of BERG Contemporary, tells me as we sit on the gallery’s second floor. “I’ve been working as an artist for decades, and I was an art teacher for a long time at the Academy of the Arts in Iceland; I’ve also been a curator, and I’ve also collected art—so this was the last role I wanted to try.” Jónsdóttir spent years searching for the right place for a gallery before finding this spot just a year and a half ago. The central space garners steady foot traffic from tourists, and underwent major renovations to reach its current, pristine state (it was formerly an office, but originally a glass factory), and there’s more to come. A large window at the back of the gallery looks onto a freshly finished deck and two small properties, one of which will be converted into a space for showing video art and site-specific work. The other will be replaced with apartments where visiting artists may stay.
“I intend to run this gallery as a place for museum-quality exhibitions—that is the aim,” notes Jónsdóttir. “I want the exhibitions to be experimental; the kind of artists I mainly work with are doing things that are not totally mainstream.” The gallery’s eight-artist roster is where its strength lies, spanning Icelandic and international artists, with a focus on video and multimedia installations.
For example, BERG Contemporary is the first gallery to represent
Steina and Woody Vasulka
(born in Reykjavík and Brno, Czech Republic, respectively), video art pioneers who developed methods that have been hugely influential to younger generations of artists. (Both artists will have solo shows in 2017.) Among younger artists is
Sigurður Guðjónsson
, who creates encompassing installations that are equal parts sound, video, and installation. Similarly expansive are the works of
Finnbogi Pétursson
, who is known for large-scale installations that involve giant tanks of water, speakers, and light—a show of new works by the artist inaugurated the gallery in March. And while Icelandic artists make up over half of the roster, international artists are key to the program, like Japanese artist
Rintaro Hara
and Polish artist
Monika Grzymala
. “I think art is a very international thing,” says Jónsdóttir when asked if she feels pressure to be an ambassador of Icelandic art. “I don’t think that borders are suitable in art.”

Advertisement
The current show, Stefánsdóttir’s “Shift,” includes works that are some three years in the making. The abstract paintings float along the walls, absorbing and reflecting light; many are monochromes created with iridescent acrylics, their thin washes of paint recalling watercolor. The artist’s palette of deep greys, steely blues, cobalts, and whites might lead one to think of the surrounding landscape—a minute’s walk from the gallery is the Atlantic Ocean and in the distance, snow-capped peaks—but it’s actually the last thing on her mind. “I try to avoid the landscape,” Stefánsdóttir tells me. “I’ve actually been told I’m the least typical Icelandic painter.” New works also reflect on the gallery. “I was watching as they were developing this space, it’s a completely different construction from what it looked like before,” she says. “It’s just a fantastic exhibition space; there are no columns, it’s very clean.”
While developing the artist roster was among the major challenges that Jónsdóttir faced in setting up the gallery, she also emphasizes the commitment it takes to run a gallery in Reykjavík. “I look at this as a long-term project. I know it’s going to be a long way to break even, and that’s alright,” she says. Jónsdóttir admits that the local art market is not strong, and she intends to help instill in the Icelandic community an interest in collecting and supporting artists. This sentiment is felt across the city’s other commercial galleries—Tveir Hrafnar listhús, i8 Gallery, and Hverfisgallerí. “Rules for other art markets abroad don’t apply here,” says Aldís Snorradóttir, director of Hverfisgallerí, which was founded in 2013, and merged with ÞOKA in January 2015. “We’re just still so new to collecting, with such a young art scene here, that there aren’t that many people that see the importance of collecting art as a part of being a cultural, well-rounded individual

In this vein, the existing galleries have been quick to welcome BERG into their small, but spirited, art scene. “i8 has been around for so long, and they were the only gallery; so then we were the other gallery, and now just getting another one is so important,” says Snorradóttir. “We only see it as a good thing that other galleries open, so that we can build  more of an art scene.” i8 Gallery, perhaps the country’s strongest contemporary art brand other than its artists (like
Ragnar Kjartansson
and
Olafur Eliasson
) was founded in 1995 in Reykjavík by current director and owner Börkur Arnarson and his mother, Edda Jónsdóttir. “I think it’s great that things have changed in the last few years, from us being very lonely, and now there are four galleries that represent artists, in total around 60 artists—that’s fantastic,” Arnarson tells me. “The more that people here see that there are galleries that are representing artists, and doing good shows, that’s all good for us,” he says, regarding BERG Contemporary. “I think they’ve got an amazing space and a good program and I’m very happy for them. It’s an absolute good addition.”
When asked what success will look like a year from now, Jónsdóttir doesn’t miss a beat. “I want to show in art fairs, that’s what we’ll be working on this year, but the main success will be exciting exhibitions that will inspire the visitors and the artists,” she tells me. “It’s important to me to give the artists space, a little air under their wings, to inspire them to do something that they wouldn’t do, without this gallery.”
Casey Lesser is Artsy’s Lead Editor, Contemporary Art and Creativity.