Can Only Rich Kids Afford to Work in the Art World? 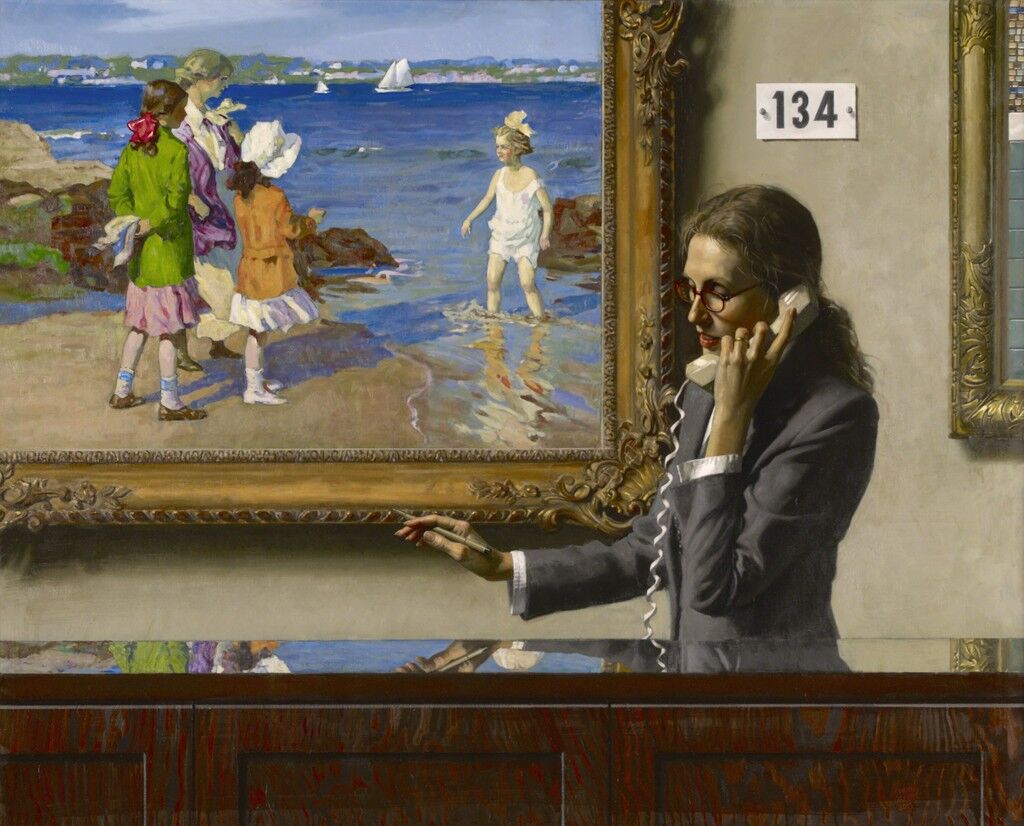 Daniel Greene
Lot 134 - The Water's Fine, 2013
Gallery Henoch
Naiomy Guerrero, 26, goes to at least a dozen art events a month; more during the art world’s busy fall season. She’s worked for several high-profile arts nonprofits, artist studios, and galleries, and began her master’s degree in art history.
But around two years ago, she left her job in the art world. Guerrero hasn’t lost her passion for the arts, and still blogs about art at GalleryGirl.nyc. But as the daughter of two immigrant parents, she chose financial stability. She now works as a financial aid counselor, earning over 50% more than she did at her most recent arts-related job.
“I grew up poor, and I never want to be poor again,” she says, even if “that means not working in the art world because there isn’t a stable enough position.”
Unlike some of her peers, Guerrero wasn’t able to fall back on a crucial resource: help from Mom and Dad. A recent report in the New York Times showed 22-, 23-, and 24-year-olds aspiring to work art and design are the most likely to receive financial assistance from their parents, with 53% reporting some help, compared with 40% of twenty-somethings overall. They also received the most money, an average of $3,600 a year, compared with an average of $3,000 for their peers in other fields.
While it’s hardly headline news that creative fields aren’t the most lucrative, the finding highlights the largely invisible role of class in the art world, at a time when efforts around gender and racial inclusion have become increasingly commonplace. It also points to some of the challenges in bringing economic diversity to a liberal-leaning industry that values humanism and resourcefulness, but also relies on the ability to engage and feel comfortable with deep-pocketed collectors.
It also highlights how, in some ways, the art world plays by its own economic rules. Many industries across the economy are making active efforts to diversify their workforces, driven by research showing that diversity is correlated with better economic performance. But key segments of the art market are built upon the spending habits, philanthropy, and social networks of the ultra-wealthy, a feature of the commercial art world that appears to immunize it against this workforce trend. Thanks to its structural dependence on a small group of high-net-worth collectors and donors, hiring in some quarters of art world tends to favor those with the right connections and similar frames of reference.
Of course, it’s not every part of the art world. A number of institutions across New York are taking steps to help bring down the barriers to a career in the arts, by providing paid internships or building affordable housing for artists. But the barriers arise early on. Guerrero, for example, was born and partially raised in New York (she also spent time in the Dominican Republic), but didn’t visit an art gallery until after her first year of college.
“I had no idea the cultural and artistic mecca that New York City was, because for me, in the Bronx, that didn’t exist,” she says.
Then there’s the cost of education. Undergraduate tuition at a private arts school is expensive, and scholarships are less common than at wealthier universities with large endowments. New York’s Pratt Institute charged $46,140 for the 2016–2017 school year. The historically free Cooper Union, against the protests of many students and faculty members, began charging tuition in 2014.
Out of school, few artists sell enough work to survive in the early stages of their career, and many entry-level jobs in New York City’s large and flourishing culture industry pay very little, or even nothing at all. A 2011 study from Georgetown University’s Center on Education and the Workforce found that studio arts majors were among the top 10 majors with the lowest median earnings, highest unemployment rates, highest incidence of part-time work, and lowest average earnings boost from a graduate degree. President Barack Obama was so skeptical of the value of an art history degree he counseled students to study manufacturing instead, despite the rapid disappearance of manufacturing jobs since the 1970s.
At the auction house Sotheby’s, interns make $11.27 an hour, and entry-level jobs like department assistant and administrator pay around $40,000, according to career website Glassdoor. At the Metropolitan Museum of Art, research assistants make around $34,300, according to Glassdoor. 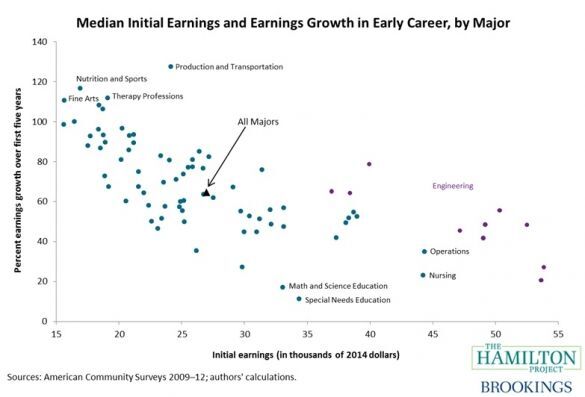 But those early years are key: A 2014 study of Census Bureau data from The Hamilton Project found that fine arts majors are among the lowest-earning graduates, but their earnings trajectory is also among the steepest. Their initial earnings barely surpass $15,000, but more than double within the first five years of their careers, highlighting how critical financial support can be during those early twenty-something years. Art history majors make around $32,000 annually in the first year out of school, according to the study.
Internships, many of which are unpaid, present another barrier. When Guerrero worked at an arts nonprofit making $33,000 a year, two of her colleagues with similar responsibilities were unpaid interns.
Those unpaid internships help perpetuate inequality in the art world, says Tom Finkelpearl, the Commissioner for New York City’s Department of Cultural Affairs, helping those who can afford to work for free get their foot in the door.
“Every time you open the door for an unpaid internship, you’re closing the door on someone else,” says Finkelpearl, who received his MFA from New York’s public Hunter College and who is spearheading a number of initiatives to diversify New York’s cultural landscape.
Last year, the DCA and the City University of New York launched the CUNY Cultural Corps, a $1 million program to place over 70 CUNY students and recent graduates in paid internships across several dozen of the city’s cultural institutions. Corps members will earn $12 an hour and work up to 12 hours per week at places such as the Brooklyn Museum, MoMA PS1, and the Studio Museum in Harlem.
Another New York institution, the Metropolitan Museum of Art, offers approximately 75 paid internships for high school students and 40 paid internships each year to college undergraduates, graduate students, and recent graduates. There are opportunities and funding designated for interns who come from backgrounds underrepresented in the museum community, and every intern is paired with a mentor. High school students also receive a transportation subsidy, intended to remove an often-overlooked barrier to participation.
One position, the Lifchez/Stronach Curatorial Internship, specifically targets students and recent graduates “whose economic background might jeopardize the pursuit of a career in the arts or museum field.” The nine-month program pays $21,000, or less than $16 an hour, plus health and retirement benefits.
Sandra Jackson-Dumont, chair of education at the Met (and the first person in her family to graduate from college), says getting the word out about these programs was as important as funding them.
“Awareness and outreach is still the number one problem,” she says, noting the museum had recently held an event with 500 professors from around 100 New York-area colleges and universities to help them use the museum as a teaching tool and spread the word about internship programs and other resources.
It’s not clear those efforts go far enough, though, in a city where the median rent for a one-bedroom apartment was nearly $2,700 in January 2017, according to real estate website RentJungle. A living wage for a single adult in New York is $14.52 an hour, according to the living wage calculator from the Massachusetts Institute of Technology.
“The rents in New York City have increased substantially, but incomes for artists have not,” says
Sharon Louden
, an artist, teacher, and the editor of Living and Sustaining a Creative Life (2013), a collection of essays by artists. She points to efforts like the Minneapolis-based Artspace, which builds affordable housing for artists around the U.S., and which opened a space in East Harlem, New York, in 2014.
But Louden said the problem goes deeper than soaring rents. Low earnings across many sectors of the art world stem from Americans’ low esteem of the role culture plays in their lives, she says.
“If there was more value, and more understanding of the function of what the arts can do in society, I don’t think those numbers would occur,” she says. “The public doesn’t realize how [the arts] contributes to their well-being.”
To be sure, some people in the art world certainly do appreciate artists’ value, putting ever-higher price tags on works by certain superstars or long-dead masters.
That’s the part of the art world that Guerrero is keen to avoid. She’d still like to return to the art world, but not at a place where she feels excluded or tokenized.
“I could never work at an art gallery again,” she says, describing an environment “driven by people who cannot imagine or fathom” her life experience. That included her long daily commute to and from the Bronx, not always feeling safe in her neighborhood, or the fact that her father, although loving and supportive, understood little of what her career in the arts entailed. She sees herself at a more socially-oriented institution, such as the Studio Museum in Harlem, or the Caribbean Cultural Center African Diaspora Institute.
“When the right opportunity comes my way, then I will gladly seize it,” she said. “But it has to fit. It has to be right.”
Anna Louie Sussman
Related Stories