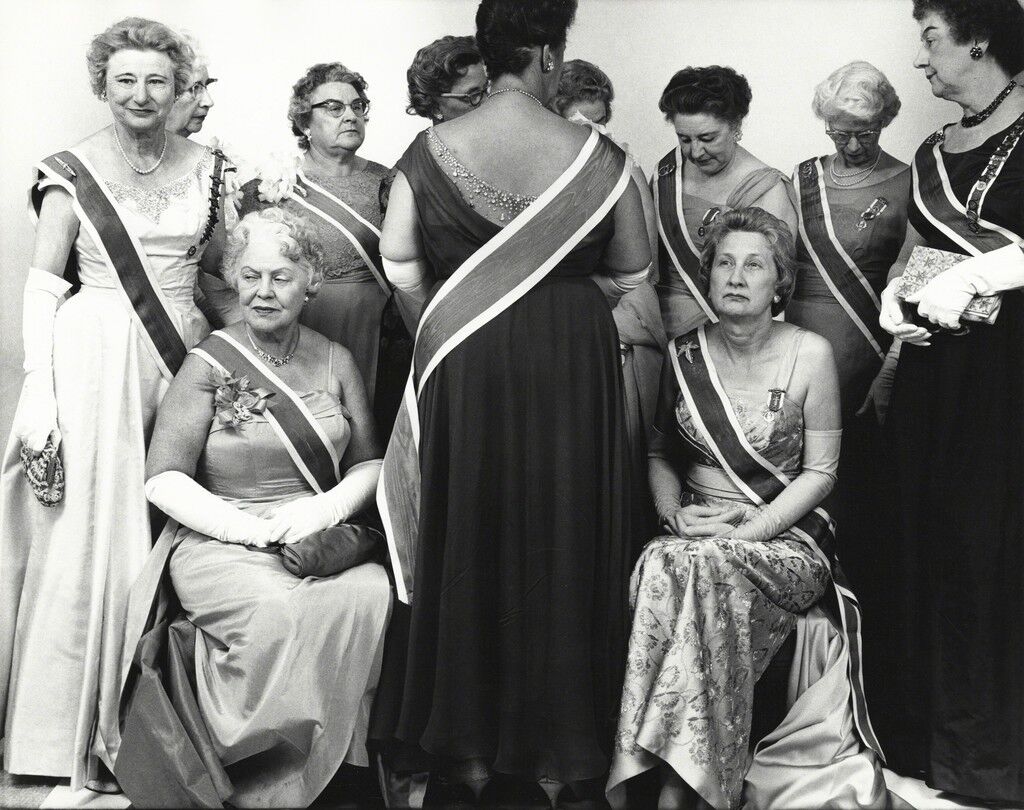 Richard Avedon
The Generals of the Daughters of the American Revolution, DAR Convention, Mayflower Hotel, Washington D.C., October 15-1963
Pace/MacGill Gallery
When
Richard Avedon
was assigned to photograph the writer James Baldwin in early 1963, it was a reunion of old friends. They had met in 1938 at DeWitt Clinton High School, in the Bronx, where they were co-editors of the literary magazine. The two had always shared something of an outsider’s perspective, Avedon as the son of a Russian-Jewish immigrant and Baldwin growing up black and gay. They also shared a similar measure of success: By the 1960s, they had both achieved fame in their respective fields.
So when, during that shoot, Avedon suggested that they collaborate again, on a book that should reflect the current state of America, Baldwin immediately agreed. They would ultimately name the 1964 oversized volume of searing portraits, accompanied by Baldwin’s pointed and sorrowful essay, Nothing Personal.
“Avedon was looking at polarities that were defining America and still define America today,” says Peter MacGill, director of the Pace/MacGill Gallery, which, along with Pace Gallery, is now representing the Richard Avedon Foundation. The first exhibition of this entire body of work, exploring civil rights, who has privilege in America and who doesn’t, and the fine line between sanity and madness, opens later this month at Pace Gallery’s West 24th Street location. 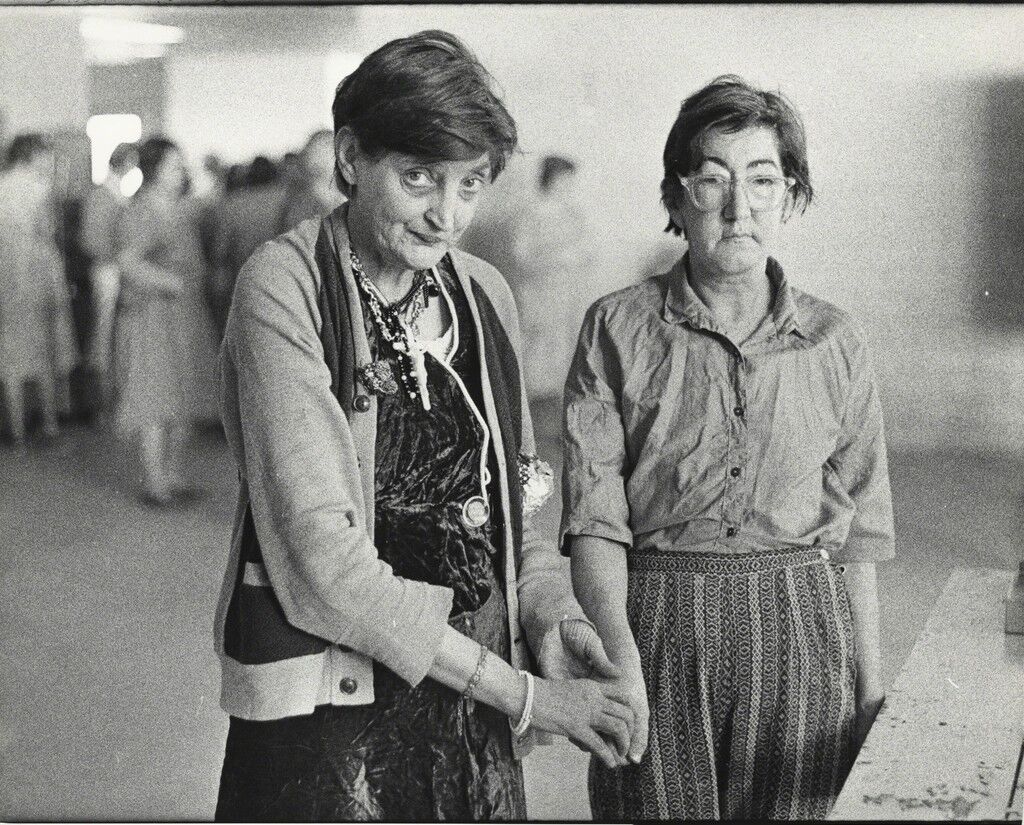 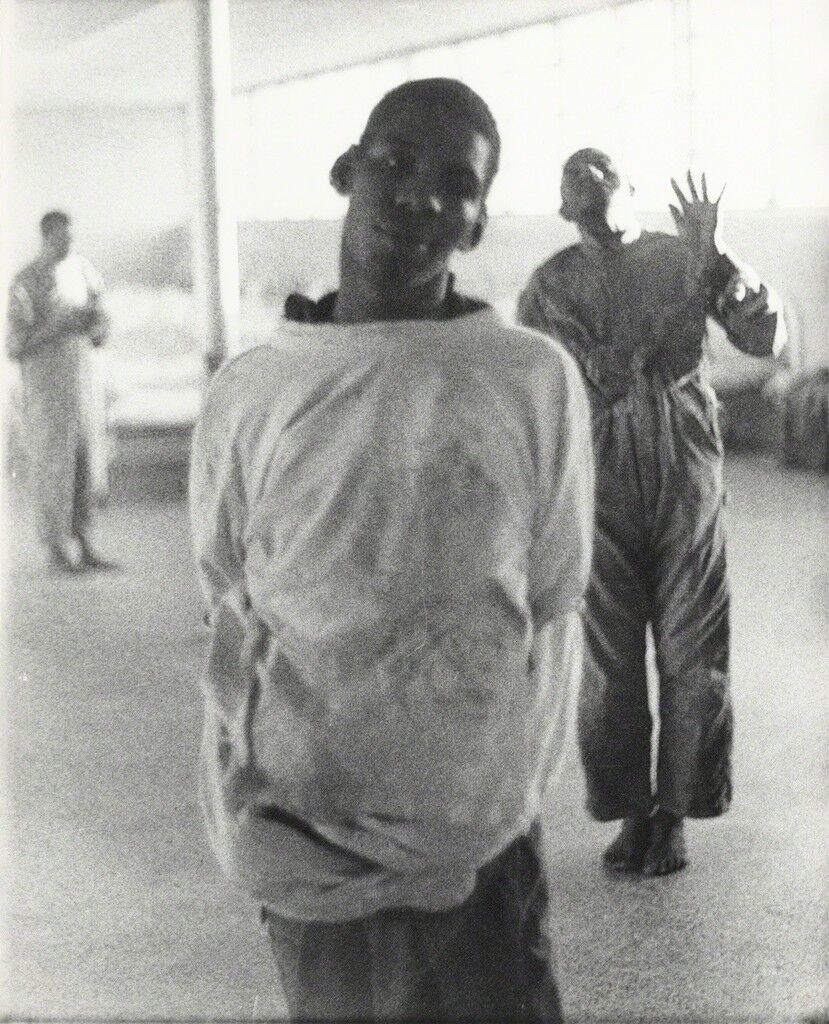 Richard Avedon
Mental Institution #10, East Louisiana State Mental Hospital, Jackson, Louisiana, February 15-1963
Pace/MacGill Gallery
“Nothing Personal” includes vitrines filled with the copious correspondence involved in the making of these pictures, which captured President Eisenhower; the founder of the American Nazi Party; a former slave; and mental health patients at the East Louisiana State Hospital, among others. “Avedon’s status at that point gave him an entree few others would have had,” notes MacGill.
In tandem with the exhibition, Taschen is publishing a facsimile edition of Nothing Personal, which was roundly criticized at the time and went out of print almost immediately. Dismissing its creators as “show-biz moralists,” New York Review of Books critic Robert Brustein questioned why Avedon, “who spends much of his career flattering celebrities with soft lights and blurred effects, should also wish to transform these same subjects into repulsive knaves, fools, and lunatics.”
Yet the book gained a cult following. In an essay for a booklet accompanying the new edition, New Yorker critic Hilton Als writes about discovering Nothing Personal at age 13 in the Brooklyn Public Library. “It’s the first time I see and realize that current events can be art, that being humane is an art,” he writes. Avedon and Baldwin “saw the exceptional in the real. Not the ‘sublime’ or transcendent, but the brutality, theatre, innocence, and confusion that made up their racist, sexist, sexy, and impossible city of love and lovelessness.” 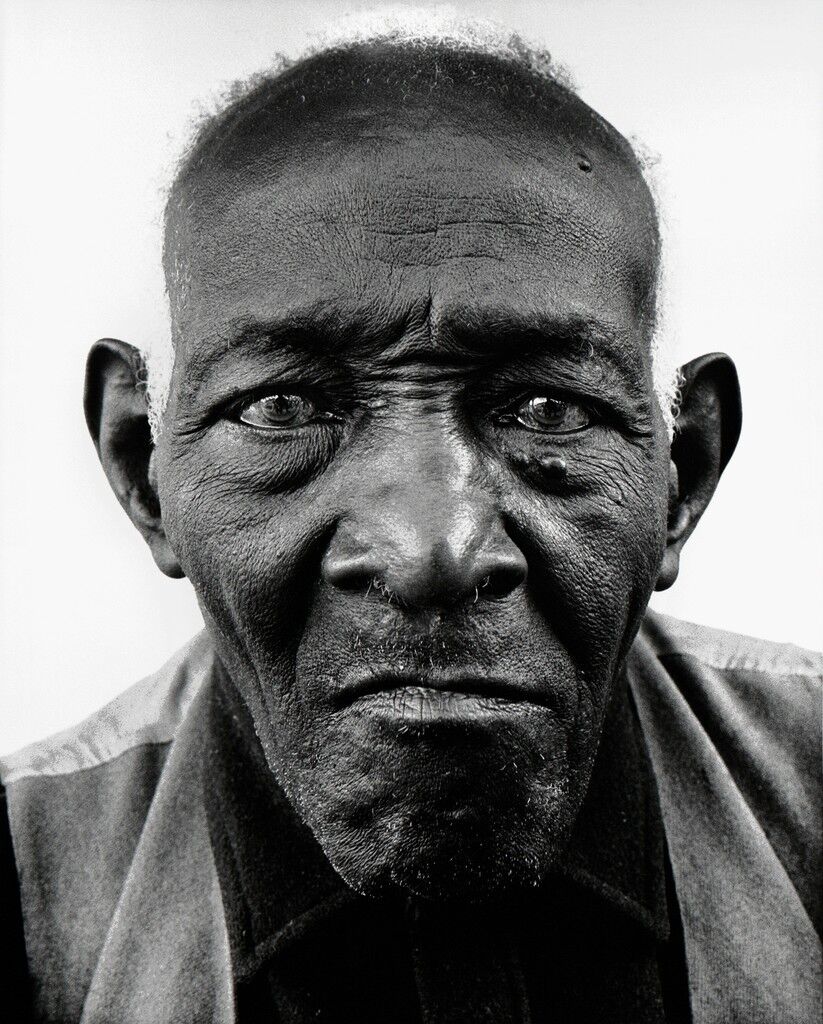 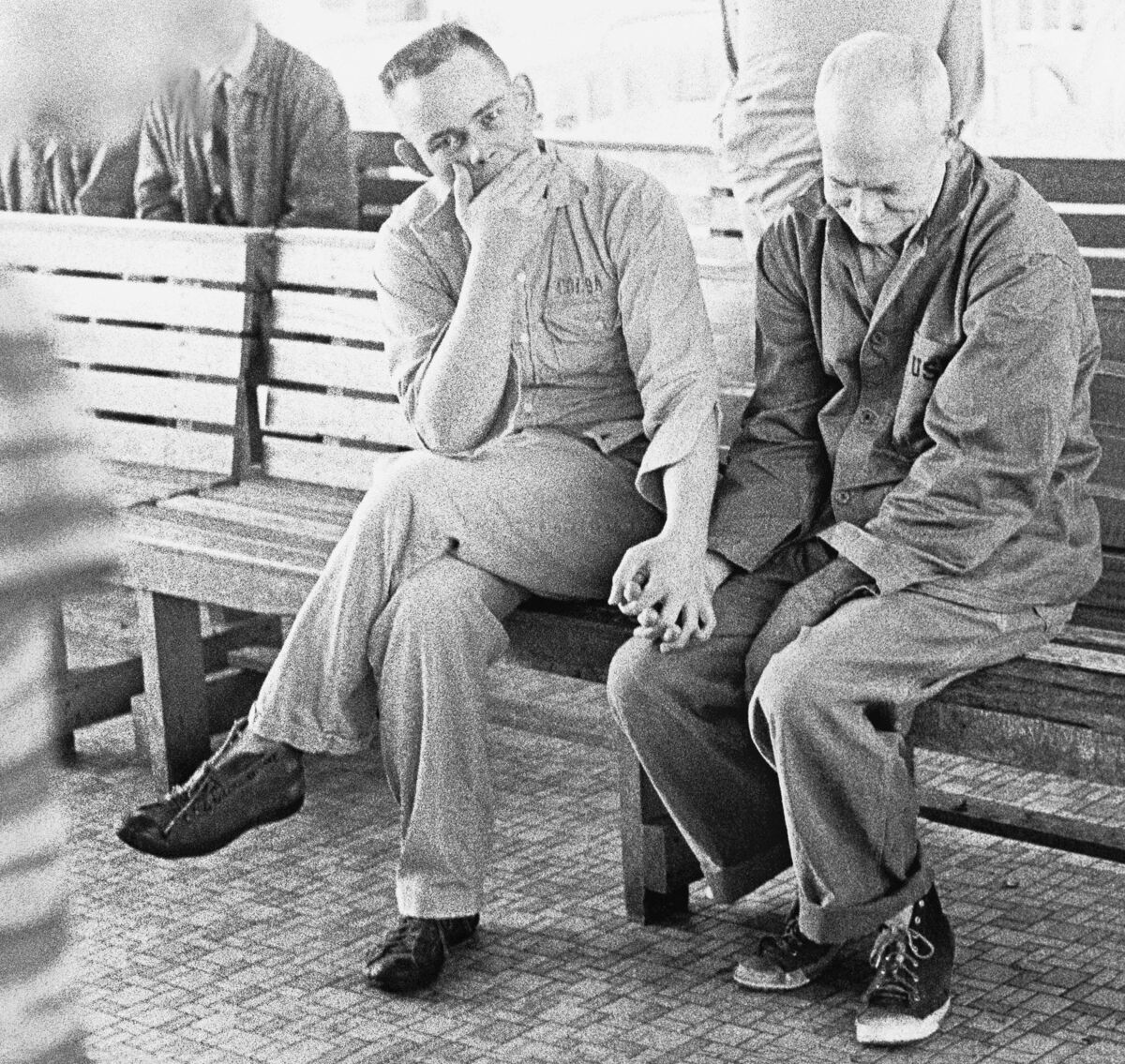 Advertisement
What’s striking in reading the book today is just how current it feels. Baldwin—whose text doesn’t explain the photos, just as the photos don’t illustrate the text—recounts being arrested on the street in New York by the police as he is looking for a taxi. “The America of my experience has worshipped and nourished violence for as long as I have been on Earth,” he writes. “The violence was being perpetrated mainly against black men, though—the strangers; and so it didn’t count.”
The exhibition was planned before last year’s election, says MacGill, who couldn’t have anticipated that the president would “be fanning the flames and redefining the horrors we thought we might be growing beyond.”
The book opens with joyful photos of a diverse range of couples just married at City Hall, shot with Avedon’s 8-by-10-inch-view camera that captures impeccable detail against his trademark white seamless backdrop. The sequence moves to an extraordinary group portrait of the Generals of the Daughters of the American Revolution, elderly women dressed as though for a pageant, their faces set in attitudes of smug self-regard.
Avedon shot the picture in the South on the same day that he photographed George Lincoln Rockwell in profile, receiving a Nazi salute from four of his troops as he throws an insidious side-glance toward the camera. This is juxtaposed with a full-frontal image of a naked, long-haired Allen Ginsberg, the poet’s right hand raised as though about to bear witness in a court of law. 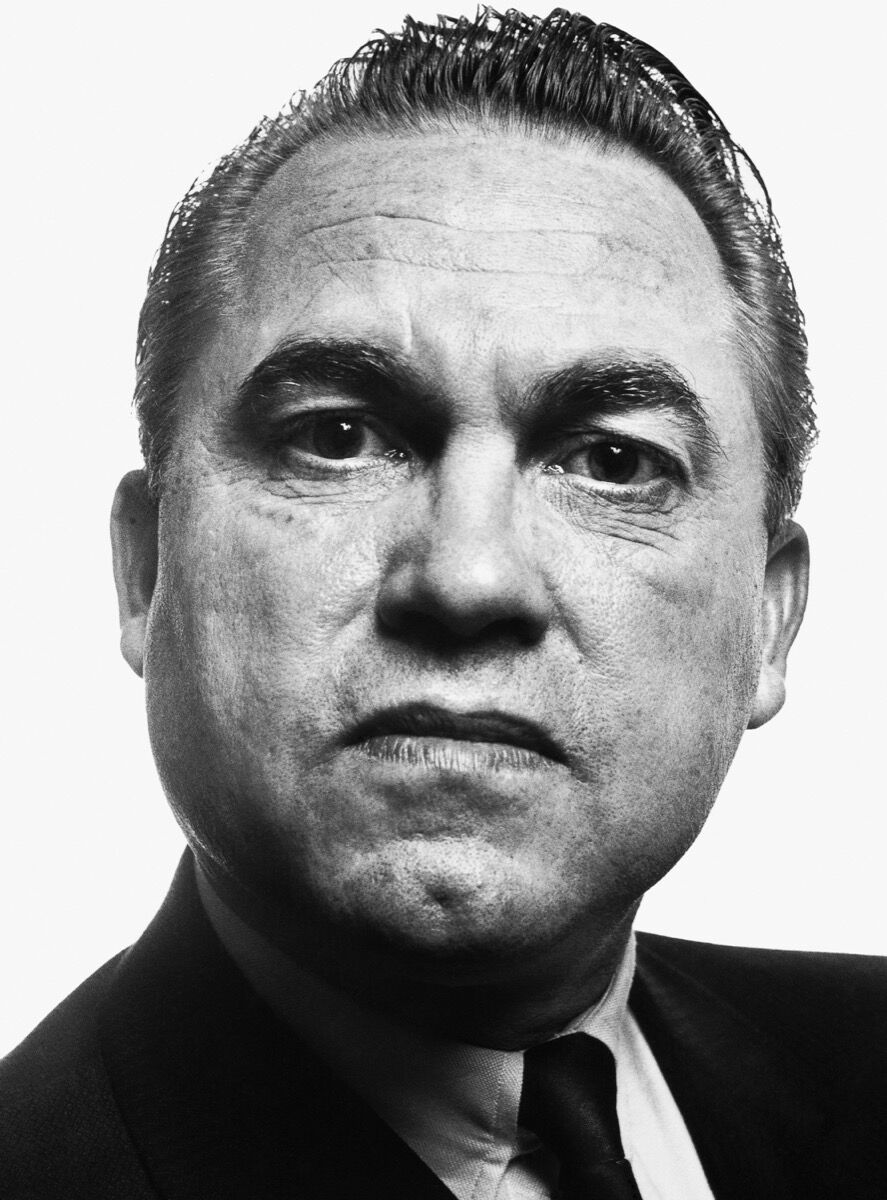 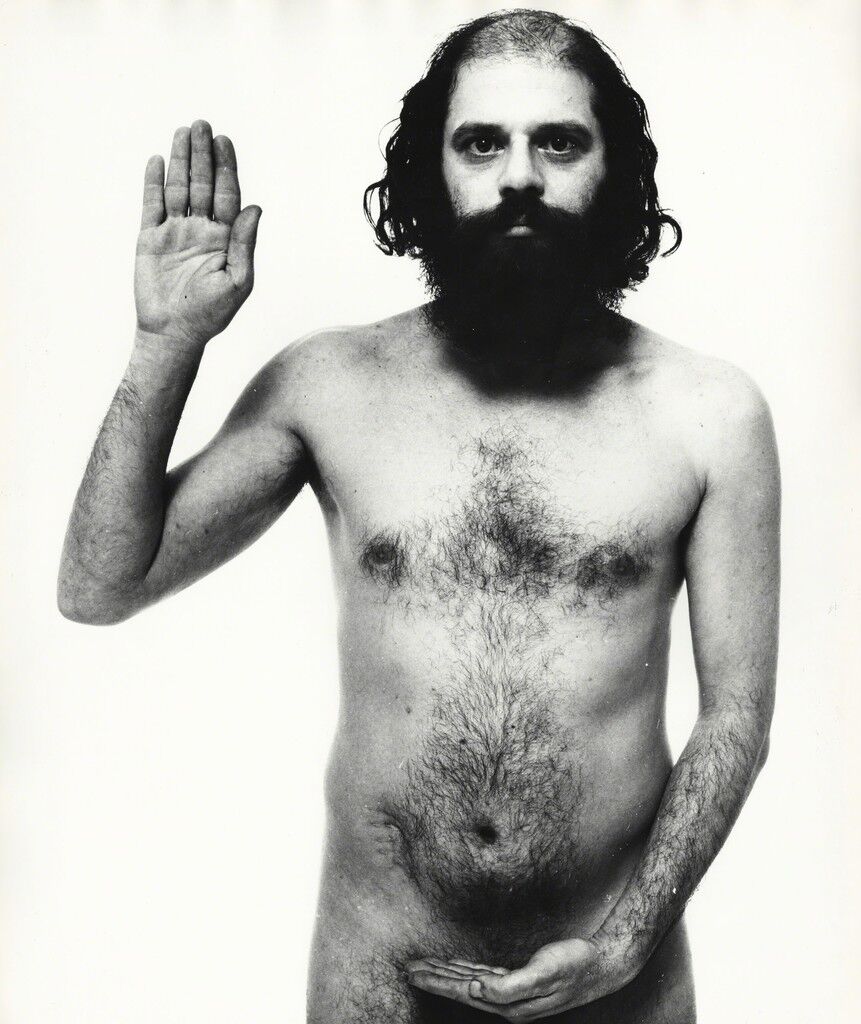 Richard Avedon
Allen Ginsberg, poet, New York City, December 30-1963
Pace/MacGill Gallery
Two images of Alabama governor (and white supremacist) George Wallace, his face staring downwards at the camera in condescension, follow a closeup of the dark, youthful faces of Jerome Smith and Isaac Reynolds, student civil rights workers. Most of the photographs are shot in sharp focus, showing every pore, for instance, on the stricken face of Major Claude Eatherly, a pilot during the Hiroshima bombing. An exception is the velvety high-contrast blurred image of Malcolm X, which renders the Black Nationalist leader’s face both mythic and inscrutable.
“You see the contact sheet of this portrait session, all in focus, and then Avedon kicked the camera and made this picture,” says MacGill. “This is speculation, but Malcolm X isn’t going to be real happy to sit down and get his picture made by a white fashion photographer. You see that in the straight pictures. Then Avedon figured out this way with camera movement.”
Also atypical of Avedon’s work is a sequence of grainy images of patients in a mental institution in Louisiana, photographed in their dismal hospital surroundings rather than against a white backdrop. “We’ve been conditioned to understand these things through the horror of war photography,” says MacGill, adding “this is something culturally in our midst.” Avedon, whose sister was institutionalized (as was a close family member of Baldwin’s), empathetically captures the suffering of the patients, some curled up on the floor. 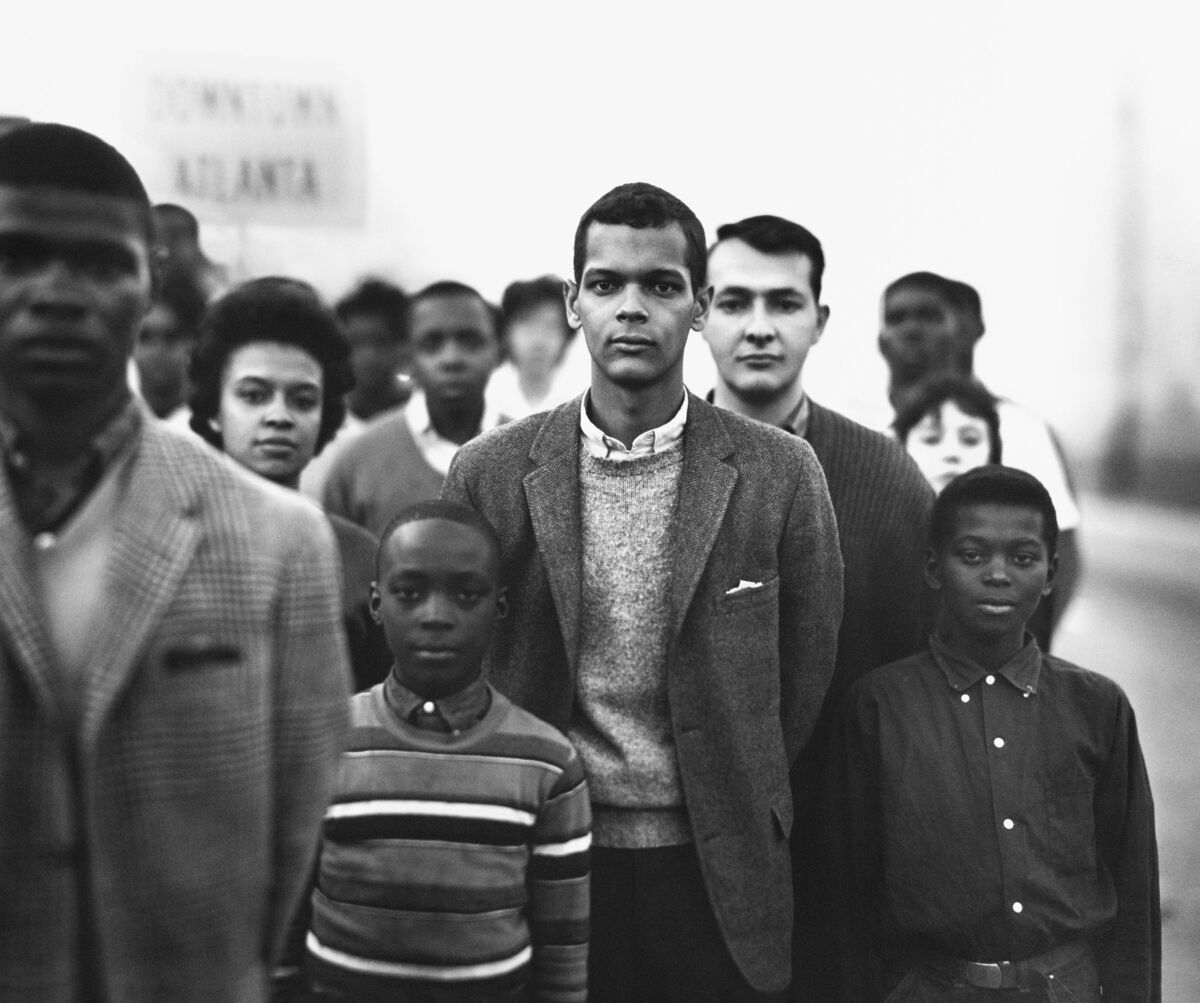 The book ends on a cautiously optimistic image of harmony. An interracial and intergenerational crowd faces the camera, with its sharp focus trained on Julian Bond, the civil rights leader who helped establish the Student Nonviolent Coordinating Committee (SNCC). Just behind him is Bob Zellner, the SNCC’s first white field secretary who was from Alabama and the son and grandson of KKK members. Bond served as the best man at Zellner’s wedding in 1963.
“I have always felt that a human being could only be saved by another human being,” Baldwin writes, toward the end of his essay. “I am aware that we do not save each other very often. But I am also aware that we save each other some of the time.”
Hilarie M. Sheets
Related Stories