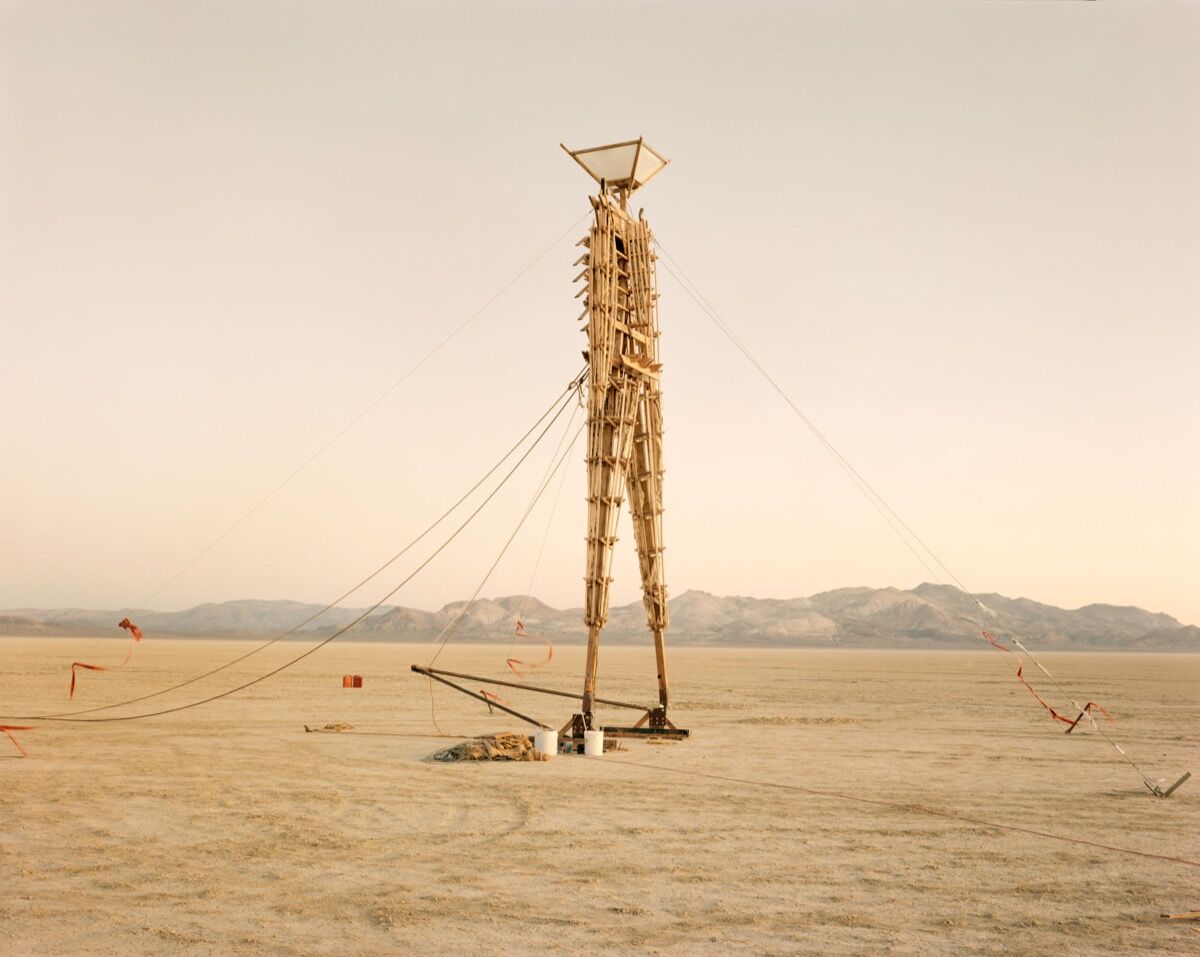 Photo by Richard Misrach. Courtesy of The California Sunday Magazine.

Richard Misrach
had been photographing the monolithic clouds and pink-hued strata of American deserts for over a decade when he came across a game of oversized croquet in 1987. Though the scenes of a group of artists whacking 6-foot-tall balls through 15-foot-tall wickets with their pickup trucks may have seemed mirage-like, the photographer was not hallucinating. Nor had he taken a wrong turn and landed in Alice’s wonderland. 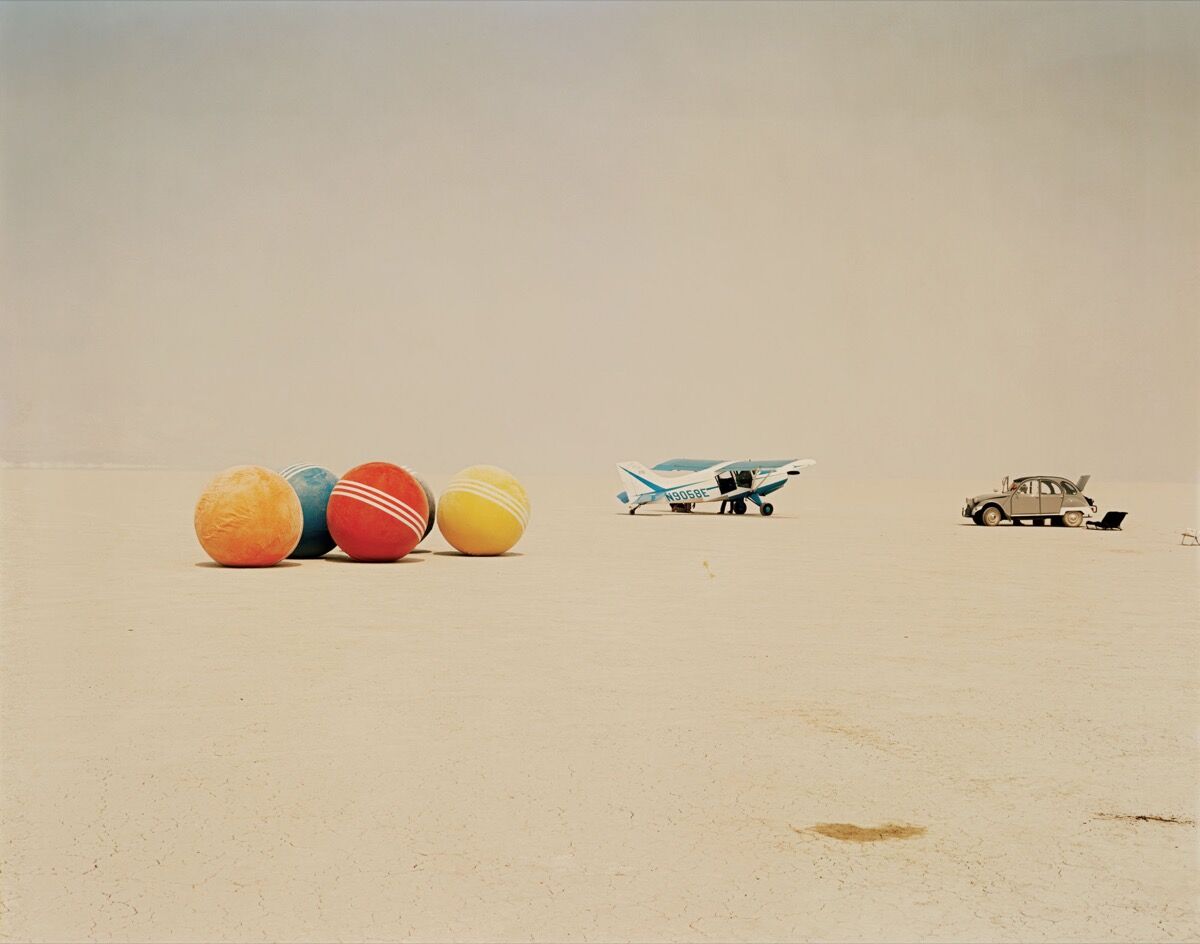 In Misrach’s career-spanning series “Desert Cantos” (1979–present), the photographer has sought to capture humankind’s presence in the desert. He found it before him at Black Rock Desert, as croquet players struggled against Nevada’s capricious winds. “These people came for this ritual in the middle of nowhere,” he said. “As soon as the winds would come up, the balls went haywire. It became very surreal; it was a dysfunctional desert croquet game.” The following year, he found them again, erecting a series of kinetic wind sculptures—giant kites and towering chess pieces with sails—but the wind refused to blow. The next time Misrach returned, he didn’t cross paths with anyone, but the following year, he found a different group of artists had staked their claim, and they had a giant wooden man in tow.
Most of Misrach’s large-format film photographs of the early days of Burning Man and the events that predated the now-famous festival had never been published until recently. Jacqueline Bates, photo director of California Sunday Magazine, asked to sift through his early works for a photo essay in the publication’s recent “Escape Issue.” 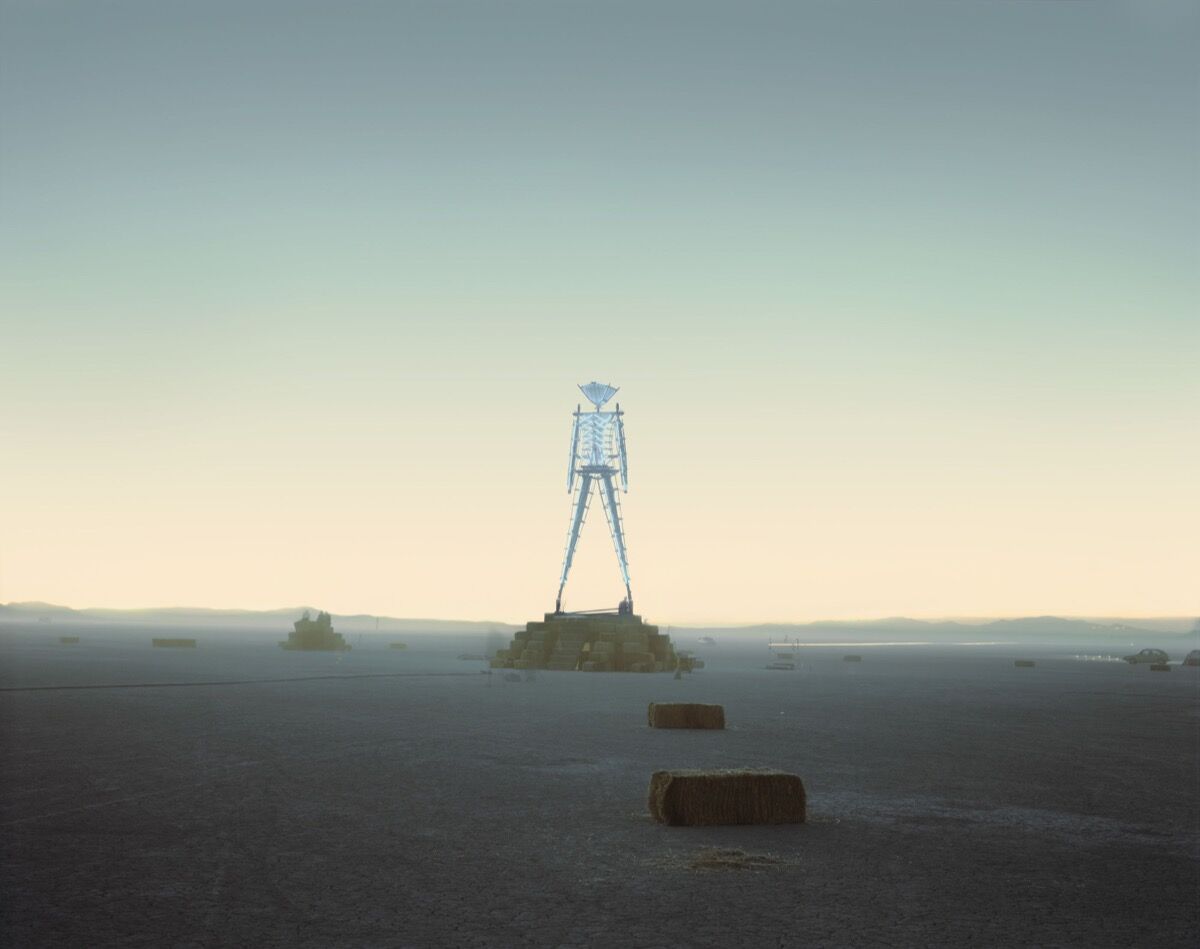 Advertisement
“The charm of the earlier pictures I took is that back then, I’m not sure that people would have been interested,” Misrach said. Now, his frames of scattered tents, small sculptural installations, and campers in visors and tank-tops chronicle the humble beginnings of a city that arises each year for tens of thousands of pleasure-seekers. While Burning Man has evolved to be a music festival in an architected space, art has been central to its concept since the beginning.
“Back in the early days, you see the beginnings. In some of my photographs, you see a few little art[works] that are pretty modest,” Misrach said. “And now they’ve evolved into really elaborate, sophisticated, beautiful, interesting projects. It’s fantastic, but they’re mega-projects.” 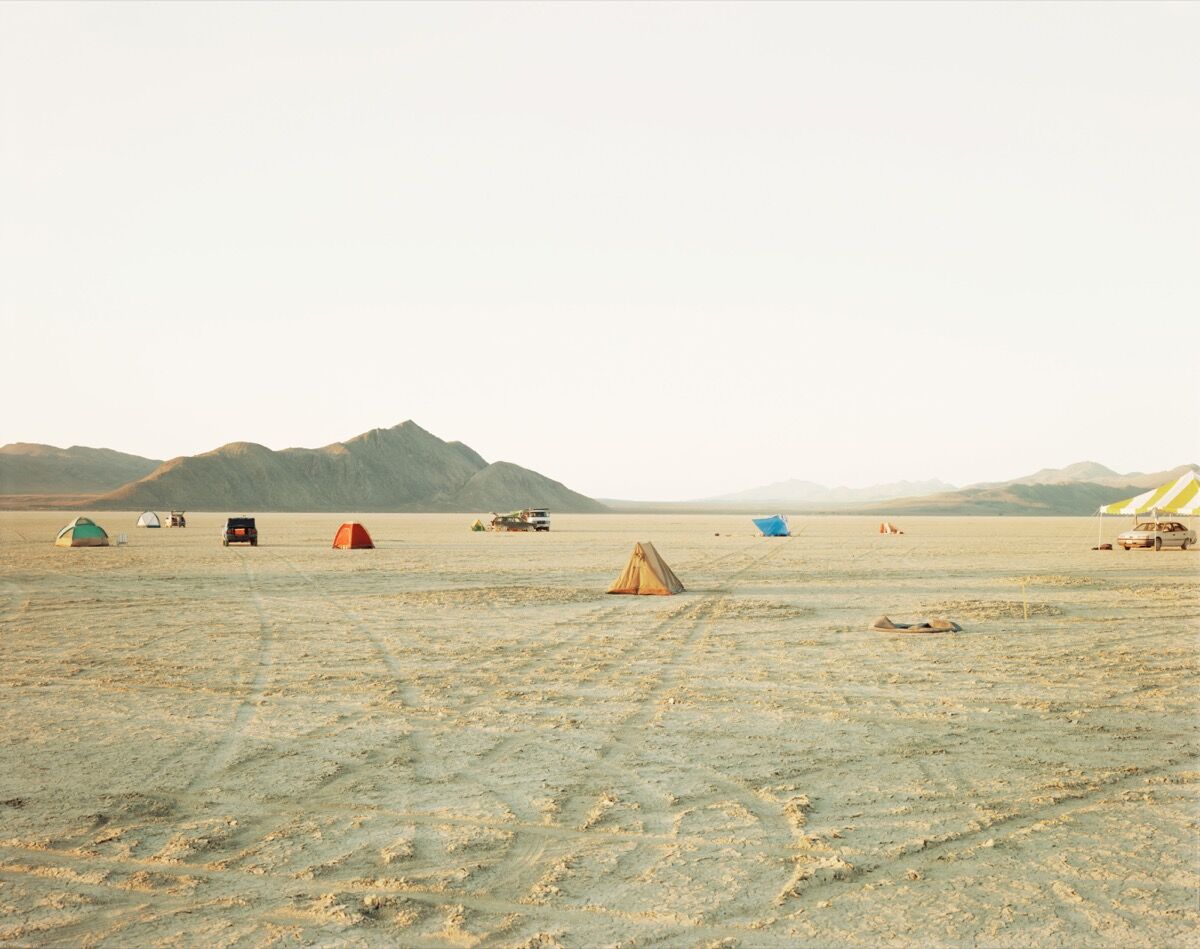 Over the years that Misrach returned, he made photographs of works such as an upside-down propeller plane; three rustic dancing figures; and, of course, the 40-foot-tall stilted wooden man set on fire during each gathering. (Today, the titular artwork has grown in size, sometimes reaching 105 feet high.) Meanwhile, artworks have become months-long endeavors, requiring teams of artists, installers, and fabrication studios. “It’s just such a vast, empty site that everything stands out in relief,” Misrach said. “It’s a beautiful, beautiful stage for any kind of art, actually. And I think that’s why it’s probably done so well.”
Misrach didn’t participate in the festival, but he returned alone or with family until 1998 to photograph it. One shot, from Croquet X Machina in 1987, shows his son Jake in cut-off shorts among the participants. When Black Rock City began to attract a crowd of over 15,000 people, Misrach moved on. 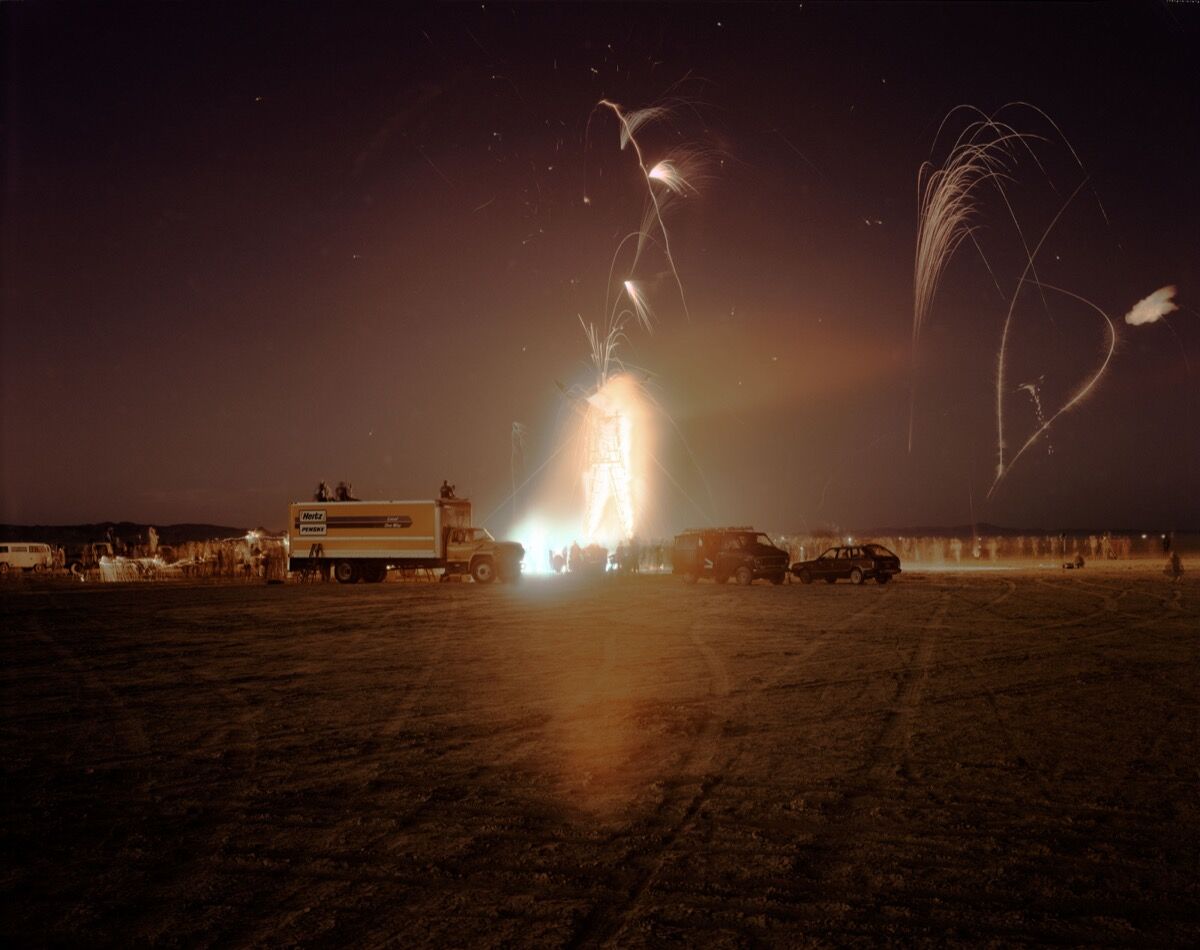 “At some point it went from being a simple art event to a real cultural event,” he said. He knew other photographers would flock to it. “In general, in my work, I’ve avoided things like national parks or subjects where lots of people photograph. It feels redundant.”
Misrach never returned to Burning Man, and he combined his images of Croquet X Machina, Ya Gotta Regatta’s wind sculptures, and early Burners into one set of images in “Desert Cantos”: artists meeting in Black Rock Desert to use the flat land as their canvases. In 1992, he found another event that shared commonalities with his Black Rock series. On the Bonneville Salt Flats in Utah, speedseekers convene each year to race motor vehicles on the hard-packed salt. Like the other gatherings, humans come together for rituals. Blink, and they’re gone, leaving the mercurial desert winds behind.
Jacqui Palumbo is a contributing writer for Artsy Editorial.
Related Stories