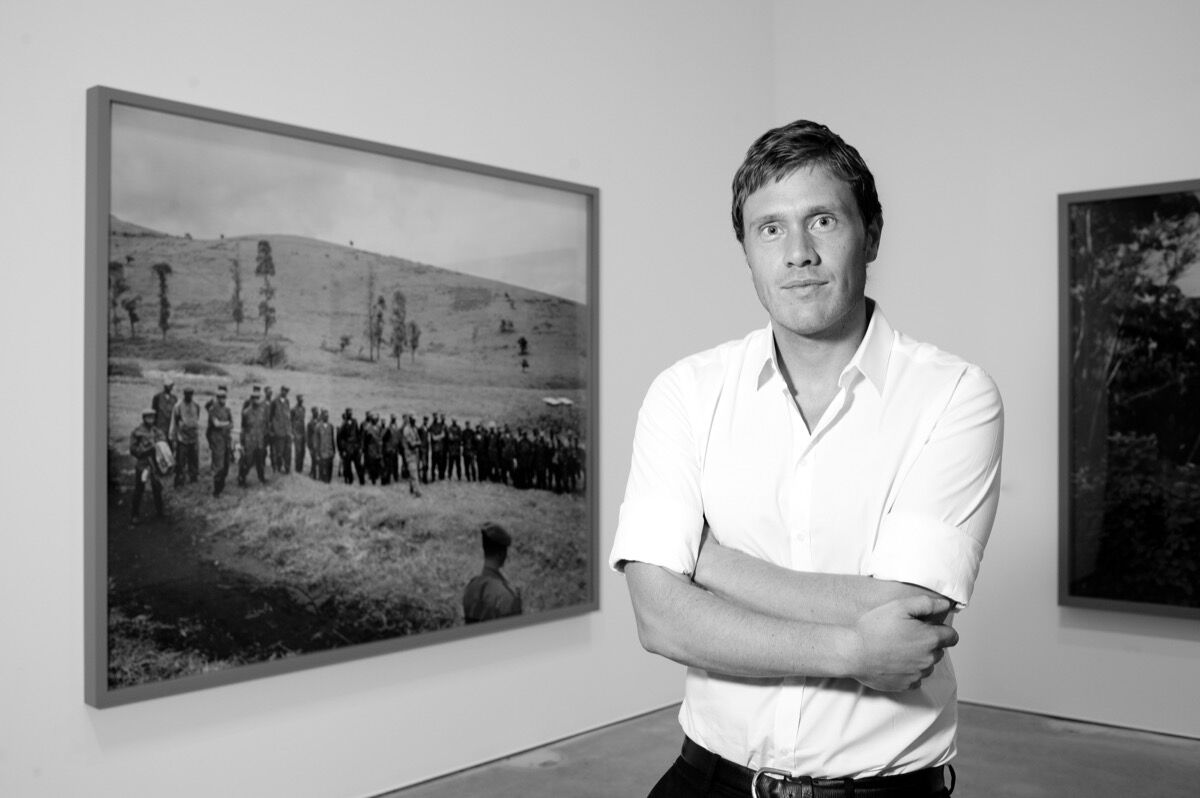 One month ago, the renowned Irish, New York-based photographer
Richard Mosse
booked a last-minute flight to Lesbos. The Greek island, home to the notorious Moria refugee camp, had been hit by a snowstorm. Mosse had witnessed the squalid, overcrowded conditions at Moria a year prior, and the thought of Moria’s inhabitants braving snow and freezing temperatures compelled him to return and document the refugee crisis there again.
Non-refugees and journalists are rarely, if ever, allowed access to the Moria camp, says Mosse. “The authorities in Greece are ashamed; the conditions are so squalid.” So he climbed a hill nearby to take a huge panorama of the camp, using a special weapons-grade camera, which captures images by detecting thermal radiation.
“The camera reveals a lot of the squalor,” says Mosse, pointing to one of those photographs, now hanging in his new show at Jack Shainman Gallery in New York. The crisp, incredibly detailed image reveals countless people standing outdoors in queues and huddles amid snow drifts. “It’s freezing cold, people are really struggling to survive; there’s no way for them to warm up.”
Mosse’s last-minute trip to Moria was the latest segment of a project that has stretched over the past two years and has seen the artist—accompanied by filmmaker Trevor Tweeten and composer Ben Frost—shoot some of the most overcrowded refugee camps in Europe. These include Idomeni, Thessaloniki, Larissa, Elliniko, and Moria in Greece, Ventimiglia in Italy, and the former Tempelhof Airport in Berlin. Mosse has created images as aesthetically stunning as they are technically unprecedented, the photos’ mesmerizing detail and visceral intimacy shifting into a darkly emotional space with prolonged looking.
Mosse became a household name in art circles following the release of his “Infra” series of photographs and accompanying film The Enclave at the Venice Biennale in 2013. The works, immediately recognizable for their fuchsia hue, employed infrared film, typically used for reconnaissance, to capture soldiers and war zones in Democratic Republic of the Congo.

His new series, titled “Heat Maps,” and film, Incoming (2016), similarly tap into an ongoing conflict and harness uncommon technology in order to communicate attacks on humanity. The photographs and film stills debuted on February 2nd in New York; and the film makes its premiere at the Barbican in London on February 15th.
Mosse began working on the series three years ago, spurred by the growing urgency of the situation for refugees fleeing the Middle East and Northern Africa. “This has become one of the big subjects of our time,” Mosse says. But he has by no means been alone in the effort.
As the refugee crisis reached a fever pitch in 2015—with over a million individuals entering Europe—increasing numbers of photographers traveled to document the struggle. The resulting images have been instrumental in bringing transparency to the the often-squalid living conditions, violence, death, and human rights violations that individuals and families are experiencing within the camps—and raising awareness around the dire need for action on the part of governments across the world.
“It’s over-photographed,” Mosse admits, “so over-photographed that people stop seeing it on some level.” He recalls being in a swarm of some 60 photographers during his latest trip to Lesbos, including the likes of famed war photographer James Nachtwey. But despite this, Mosse has been able to add to the narrative, in a way people haven’t yet seen. Through technology, he has also gained access that others have been denied.
Mosse’s camera was developed by a multinational weapons and security contractor and has the capability to shoot sharp images from as far as 30.3 kilometers (18.8 miles) away. “It’s pretty insane,” says the artist, adding that by comparison, the human eye can see a maximum of around five kilometers at sea level. Importantly, when configured to Mosse’s specifications, the camera isn’t able to render distinguishing facial features that could detect a person’s identity, something that has proven useful in gaining permission to photograph camps like the former Tempelhof Airport in Berlin where authorities are intent on maintaining refugees’ privacy. 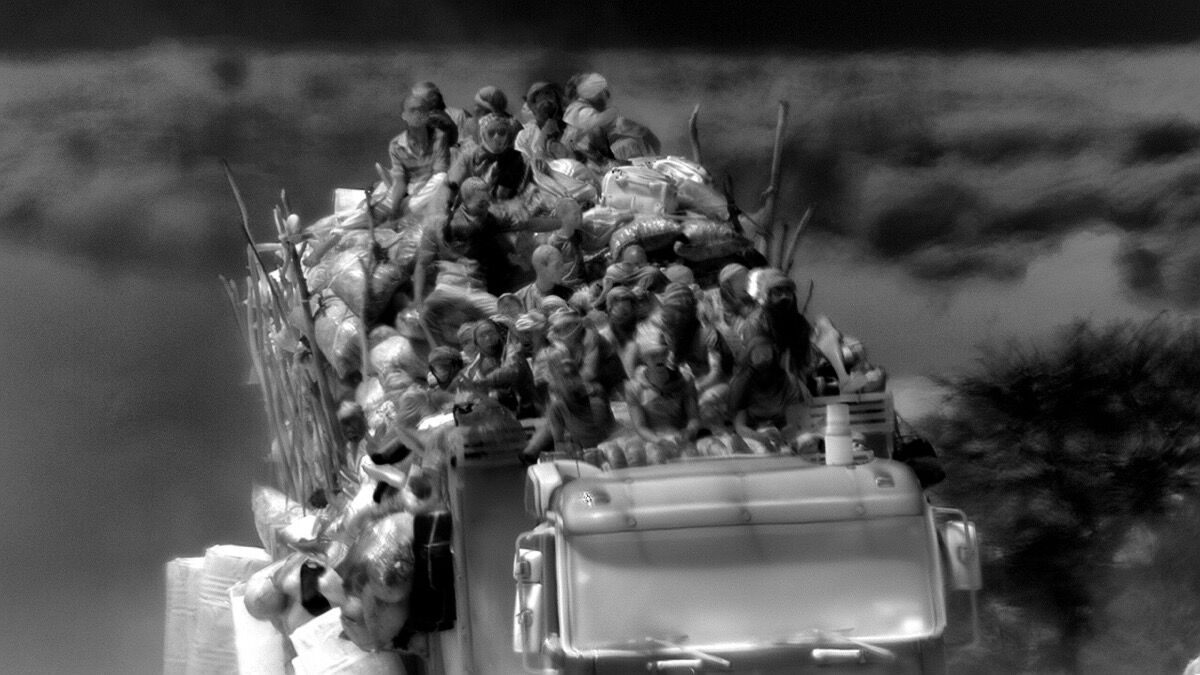 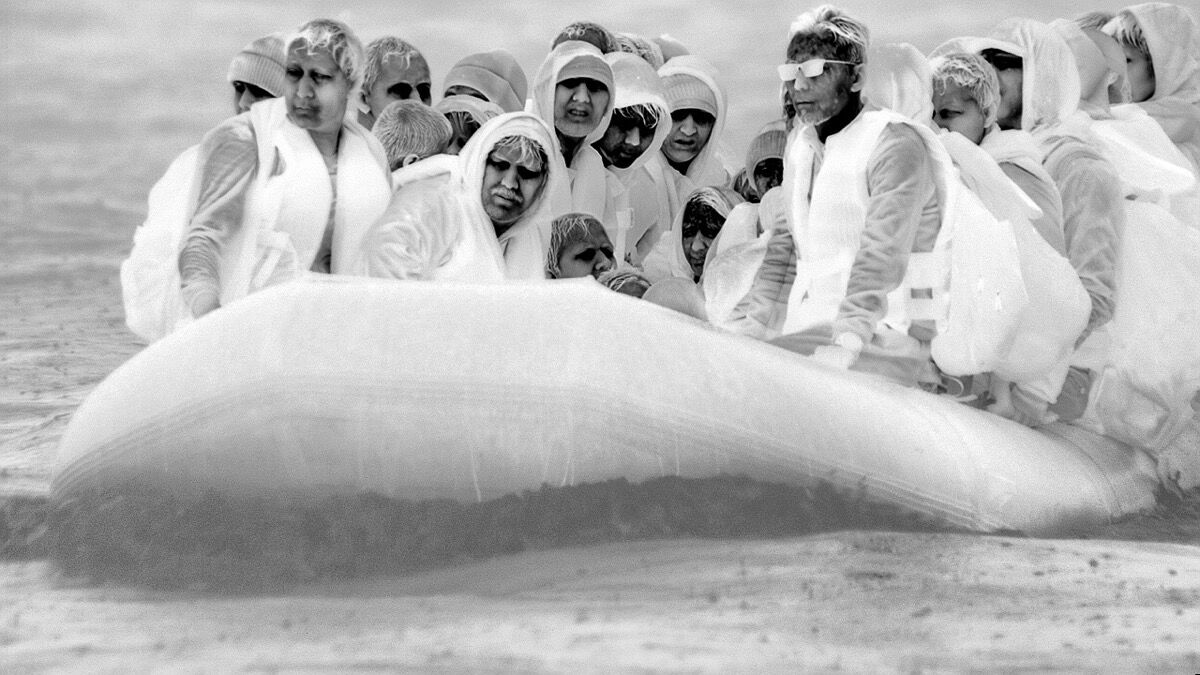 Advertisement
“I’m entering into the space of Western governments here—this is the technology used by militaries, police forces, border security forces,” says Mosse of the technique. “I’m trying to appropriate their technology and use it against itself.” He shot some portions of Incoming off the coast of Libya in the Mediterranean and in the Persian Gulf, near the Iraq-Iran border from aboard the USS Theodore Roosevelt aircraft carrier.
Mosse first learned of the camera through fellow photographer Sophie Darlington, who help him gain access to the U.K. facility that developed it. “You walk in the door and there’s a cruise missile on the left, and a virtual war simulator on the right,” he recalls.
He went to the roof for a demonstration of the camera and was able to see two men who had been invisible to the naked eye welding far away. “You could see the light of the welding flame reflected on one man’s beer belly,” Mosse recalls, “It was just such an extraordinary new image that I’d never seen before. It was so crisp.” In addition to the incredible optical zoom, the camera uses medium-wave infrared, so it’s able to cut through heat haze. “It diffuses light; it shoots nice straight lines—that’s how it can see people from very far,” he explains.
Mosse quickly took steps to acquire a camera of his own, something that came with its own challenges. “It’s regarded as a weapon,” Mosse explains. The camera falls under the International Traffic of Arms Regulations (ITAR) due to its inclusion in advanced weapons targeting systems. In its military configuration, the camera can be used to track people and vehicles and launch precision guided missiles.
A dual citizen, Mosse purchased the camera with his Irish citizenship. He keeps it in Ireland because transporting the camera within Europe falls under a single agreement, whereas bringing it elsewhere requires significant permissions. “Every time I leave Europe with the camera I have to apply with an Irish export lawyer; he has to apply with the department of foreign affairs, and they have to talk to the appropriate consulate service,” he explains, adding that some sanctioned countries like Libya and Syria would never allow for the camera to enter. “If you do this without permission, it’s regarded as weapons smuggling.”

Mosse next worked with the camera’s designer to develop a way to use it to shoot large panoramic images. He explains that the camera shoots in a kind of tunnel vision, “so it’s not as good at telling the story as a conventional video camera. It’s like trying to shoot a feature film through a telescope.” (He essentially did that for Incoming.)
To shoot the “Heat Map” photographs, they developed a robotic arm on which the camera is mounted and programmed to move precisely on a gridded-out plane. All together, the equipment weighs some 175 pounds. Each landscape comprises nearly 1000 images taken over the course of 40 minutes, which Mosse later stitches together digitally.
“You can see people have been chopped off,” he says gesturing to a man’s head and torso, centimeters away from his legs. “I left them like that; I could’ve taken them out and faked it, but I really like the way it points to [the image’s] construction and reveals its unraveling.” The final photographs are printed on a shimmering metallic digital c-paper.
Mosse likens the images to the classical paintings of
Bruegel
and
Bosch
. “You see all these little figures living their narratives,” he explains. “Also the way perspective is—there’s something bizarre happening where there’s no horizon, it’s flattened space—also evokes those painters.” The effect is purposeful, resulting from his preference to shoot the camps from above.
Incoming, the three-channel 52-minute film, has a very different effect. “Both are very expressive, but [Incoming] is much more visceral, it makes the hairs stand up on the back of your neck a little bit,” Mosse says. Some shots are fairly abstract, due to the narrow angle captured by the camera at any one moment.

The film also unleashes the full power of the camera’s infrared technology to dehumanize its subjects. It renders their skin scrawled by blood vessels and zombie-like—and captures the retention and transfer of heat. “The camera sees a sort of patina of activity,” says Mosse, pointing to handprints left onto the rail of a lifeboat careening in high waves as it prepares to make landfall in Lesbos.
Countless small details like these handprints, or a young woman making a heart shape with her hands at Tempelhof, stand out among the huge panoramas. They allow viewers to grasp the individuals and humanity often lost in the immense scale of the camps and refugee crisis as a whole.
“That’s part of the strategy really, to refresh the visual language,” Mosse says, “to arrest the viewers’ attention, and to make them think about how we represent, and also therefore regard the refugee.”
Casey Lesser is Artsy’s Lead Editor, Contemporary Art and Creativity.
Related Stories