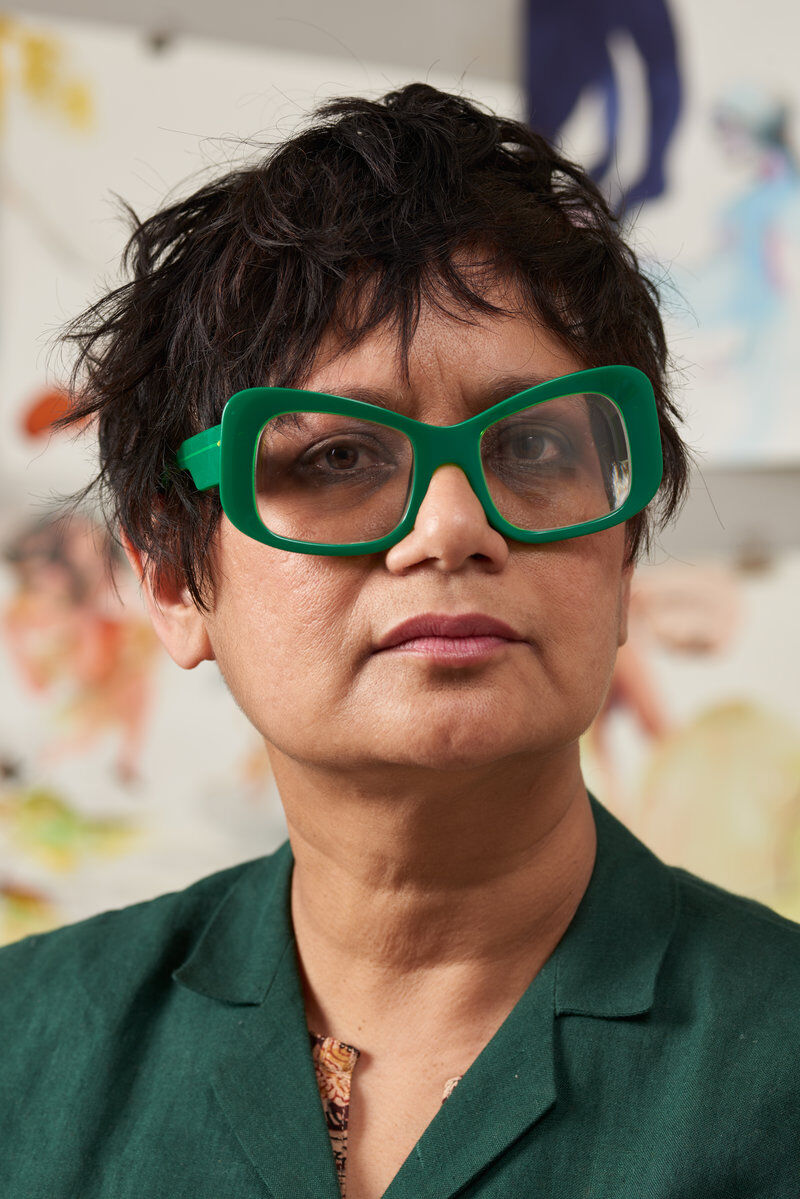 Rina Banerjee
’s sculptures and paintings are writhing with lively beings cast in acid colors and couched in lush otherworldly vegetation. Her sculptural assemblages practically overflow with materials, such as the metallic monkey figure with cowry-shell teeth that climbs on a chandelier of exotic bird feathers, faux animal horns, eggs, and light bulbs. And her paintings—airy acrylics and inks with washes of red, green, peach, and magenta, often incorporating metallic leaf or textured fabric—depict people and creatures engaging with one another and their abundant environments. Banerjee’s cast of characters are in full force this spring at New York’s Jacob Lewis Gallery in “Tropical Urban”—a befitting title for an exhibition filled with technicolored human personages clad in city-ready clothing, ensconced in jungles of color and life. 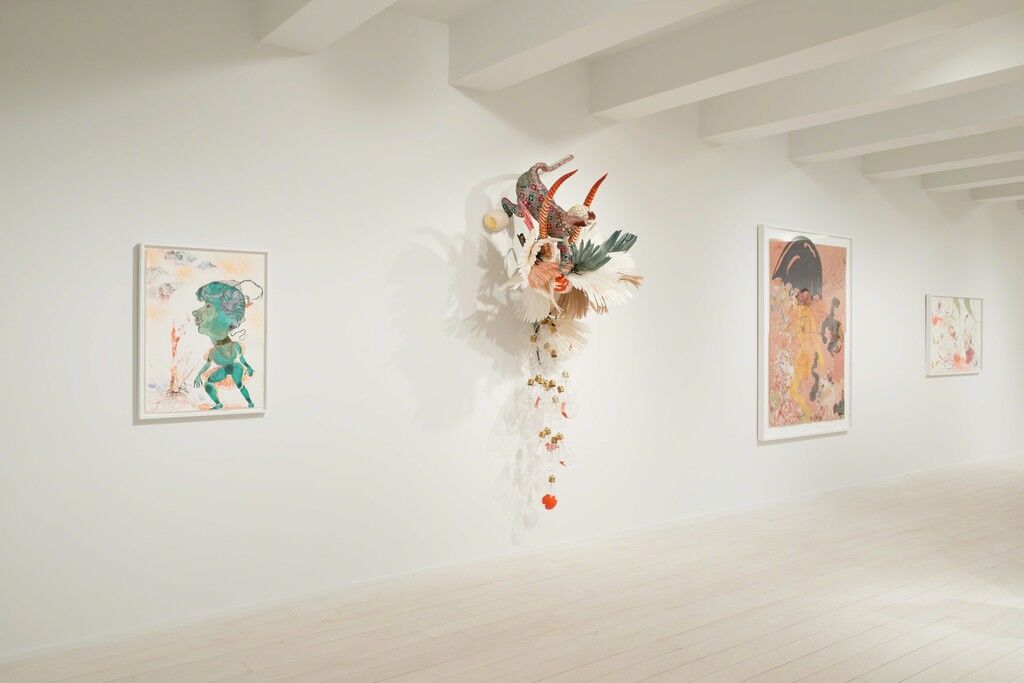 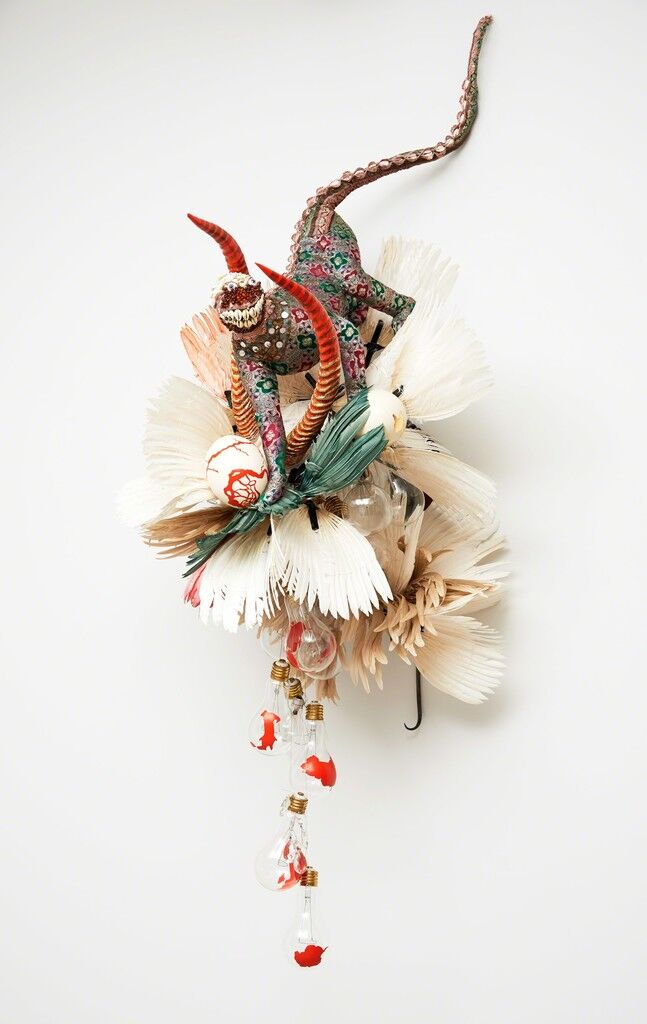 A Mad Woman, an Eternal Eve, a Monkey cheated leaped, from limb to limp in open air, curled a mischievous and bulbous melancholy in tail that sailed and with a single cough, a sudden drip, a curtain of bubbles, tears spilled to send land liquids, fertilizer, all fluid migrations leaking abroad and across, 2012
Jacob Lewis Gallery 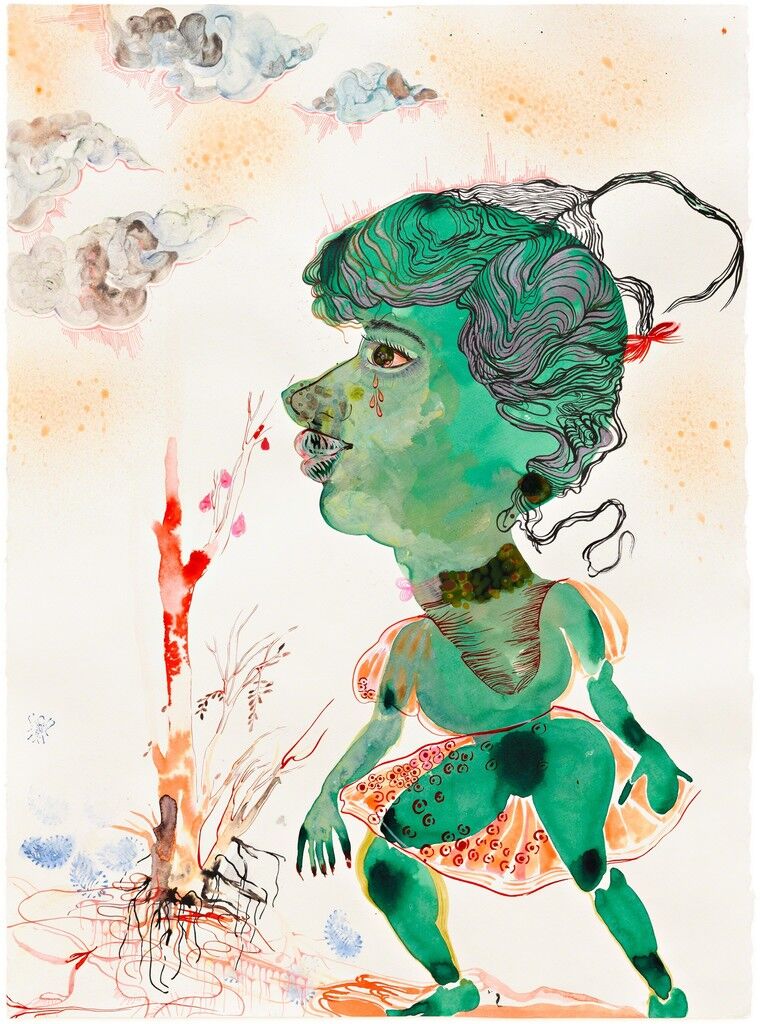 Jacob Lewis Gallery
The show furthers Banerjee’s investigations into cultural identity and exchange, and the meanings that emerge from combinations of disparate materials and ideas. With “Tropical Urban,” she homes in on the city as a place of assembly, diversity, opportunity, and action—and she injects the scenes with narratives from the Bible, Mayan fables, and European fairytales. In doing so, she taps into universal issues like equality and race. The results are roiling intersections of people (mostly female), animals, and their surroundings; ultimately they’re her own brand of cityscapes, where the expected architectures are excluded. The show’s setting, New York, is also the artist’s home—and given this, one wonders if the region’s melting-pot nature is the inspiration behind the mythical, riotous scenes at hand. We caught up with the artist recently to find out, and to learn about the process, motivation, and inspiration that goes into Banerjee’s poetic and perplexing art.
Artsy: What led you to live in New York? How has living here affected your art?
Rina Banerjee: My family arrived in New York City in 1970, when I was seven years of age. I think an important question you allude to is what conditions or circumstances make people leave a country that they themselves have claimed for 2,000 years. War and colonization bring that change. In the 1970s, there was a wave of migration from India of the educated, middle class, which was later coined the “brain drain.”
This could be recounted, from my mother’s recollection, as a time of uncertainty for a generation who did not remember the British. This generation was ready to be in the world and away from India’s rough transformation, a struggle to heal itself and become modern. My mother is from Bangladesh and she saw her own life and education vanish due to the Bangladesh War. She professed that she wanted to marry a man who would allow her to leave India. Gross inequality led my family to leave India for the United States. 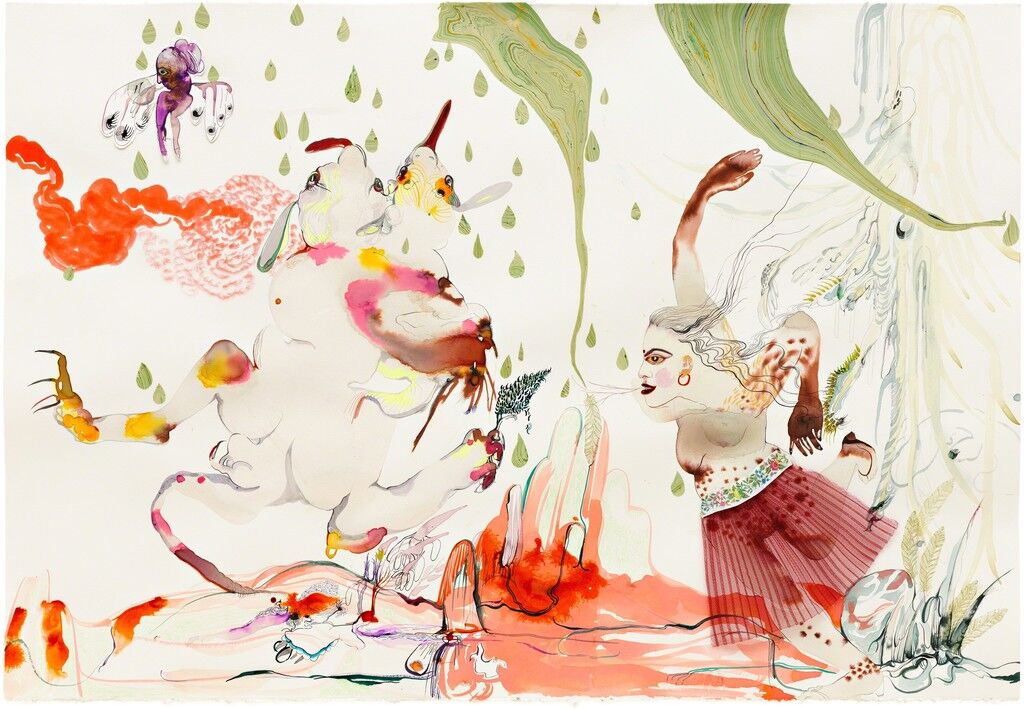 In the transplant of people battle of "all things" grew funny and fickle until "new things" could be gotten and old things were forgotten. , 2014
Jacob Lewis Gallery
Advertisement
Artsy: Is “Tropical Urban” a response to New York?
RB: My New York is a paradise—tropical in the sense that all things are invited and can grow, coexist, and flourish. Differences can be expressed, shared, and enjoyed. In the heat of this humid, fertile location are the wonders of the world, intellectuals, the talented and the outcast, wandering people who nestle here, where different communities merge and neighborhoods of diverse people coalesce.
Artsy: What is your process like? How do you choose your materials and the objects you employ in your works?
RB: All creative things happen by way of experiment, with error and practice. They are both intuitive and learned. My process includes reading, seeing, and a vast experience of sifting through information by browsing. I forage from retail stores, the Internet, eBay, junk shops, high-end antique shops, thrift stores, and local ethnic shops. The objects come when they come. There is a steady flow of selection and discarding that happens in the studio. 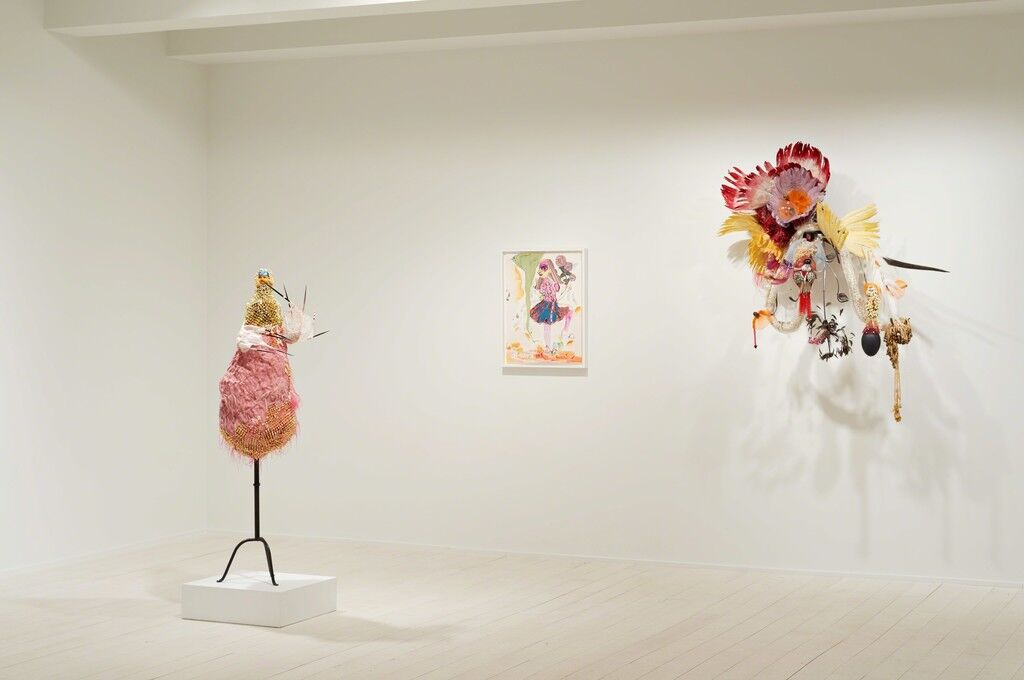 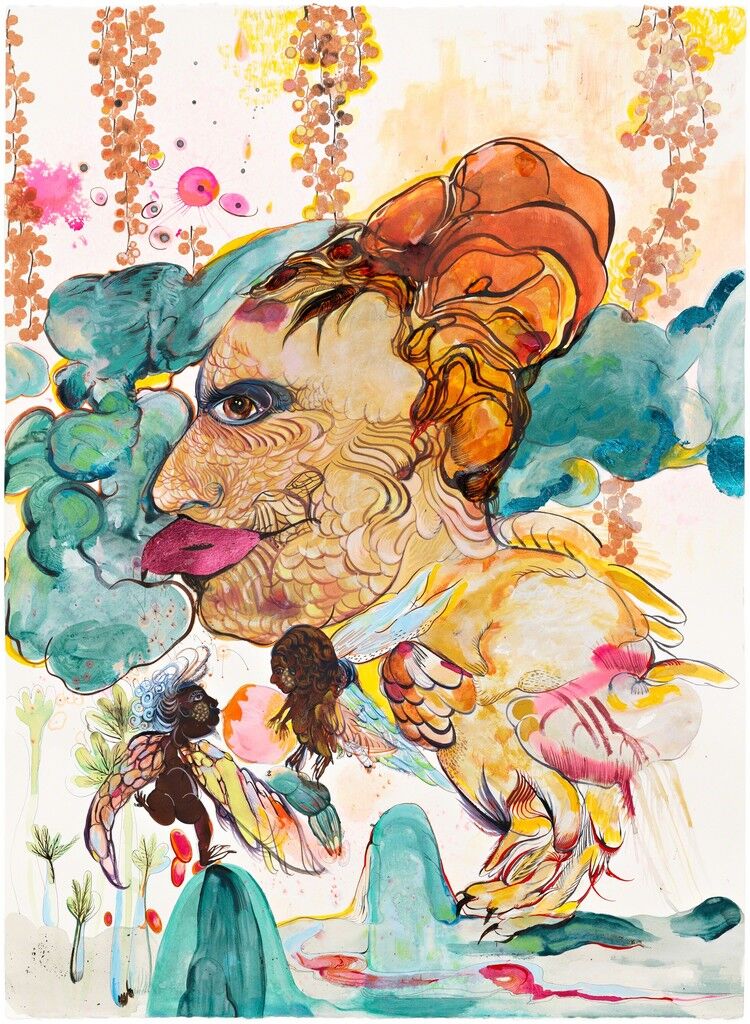 Dodo bird and her Extinction met Dutch sailors in the Indian Ocean while they were looking for fortune and existence both plain and simple sailed into new worlds and paradises or experience death was one notion , 2015
Jacob Lewis Gallery 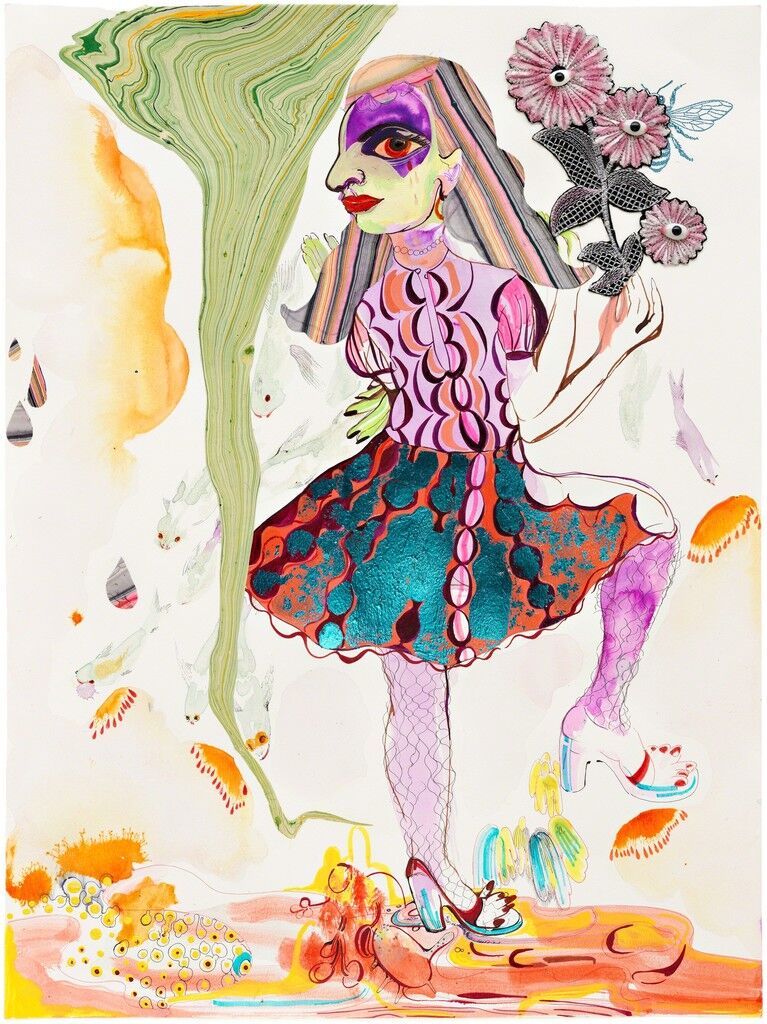 Not so so silent, outspoken when there be disgusting disaster she be named "Sky" loved booth bees and flies. Seasons surrendered when her temper chased away and colored flaming and flowered sent her pleasures of spring to open where once then and hence before could be waiting could now be rendered in her tickle and fancy! , 2014
Jacob Lewis Gallery
Artsy: How would you describe the characters you’ve created in these works? What are they doing? Do real people ever inspire your figures?
They are all aspects of our human emotion. The mythology that accumulates around them reflects a global and universal story that warns or informs us for the ever-changing future. Like deities, they are a deposit for all our emotions—fear, anxiety, desire—and they are preserved to retell the story.
The mounted sculptures at Jacob Lewis Gallery recall the mythological snake and monkey. They conjure up the stories warning of female and/or racial inferiority. The “mad woman” Eve, leaving her senses in a hysterical exit from paradise, is dehumanized as is the racial other. The snake, insect, alligator, turtle, and bird are recurring images in my work. They preserve our link to other animals.
In one Mayan fable, the serpent grows out of the son who refused to know his mother’s courage and love. The fables talk of flood and the slumber of slippery animals that could hide and then return to be reborn. These stories are relevant today because they tell of how people cope with crisis, disaster, abuse, and rejection. 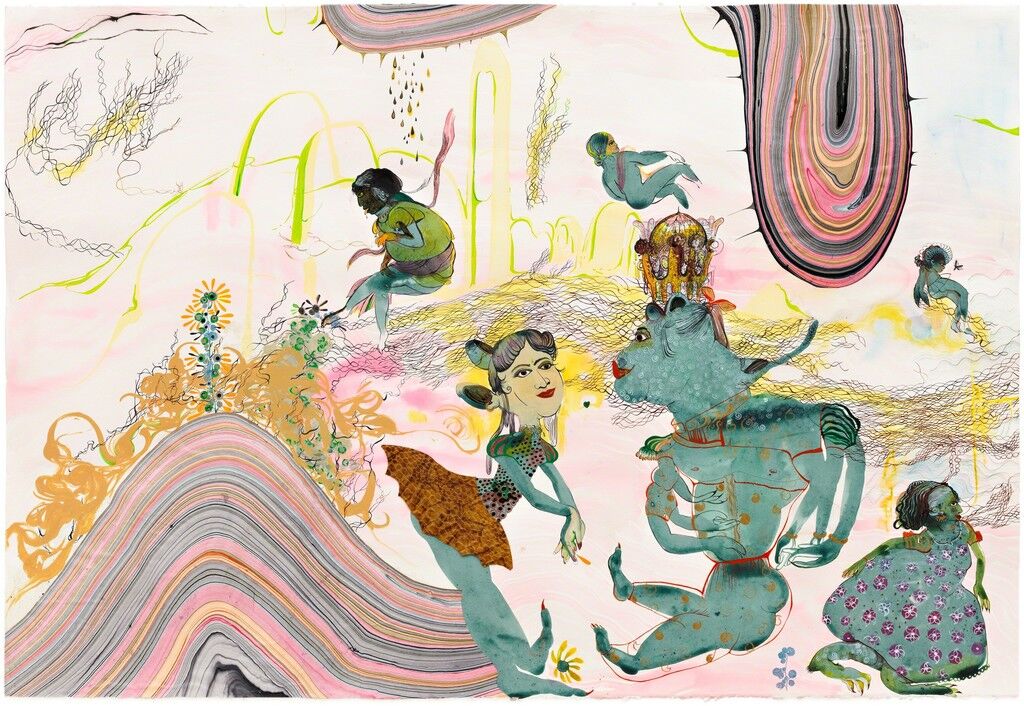 Beauty was not in the East - her figure was in part a repellant I and his aura was not so neat. The locus of a pleasure stolen from deceit, stubborn and excessive the oriental was transformed in part as objects of sexual bad habits , 2013
Jacob Lewis Gallery
You have a bachelor’s degree in polymer engineering from Case Western Reserve University and worked for a time as a chemist. How does your background in science and engineering affect the way you approach art making
Considering the experience I have of several cultures, my work affords no one identity superior value. I am what I see, and I see what I choose to see, and therein lies both the problem and the answer. I choose to lean into this education as fraught with problems, something to be manipulated, massaged and made anew. My work is not solely about New York or Calcutta or London. It rejects authenticity. Being human is the only thing I know as fact.
Casey Lesser is Artsy’s Lead Editor, Contemporary Art and Creativity.