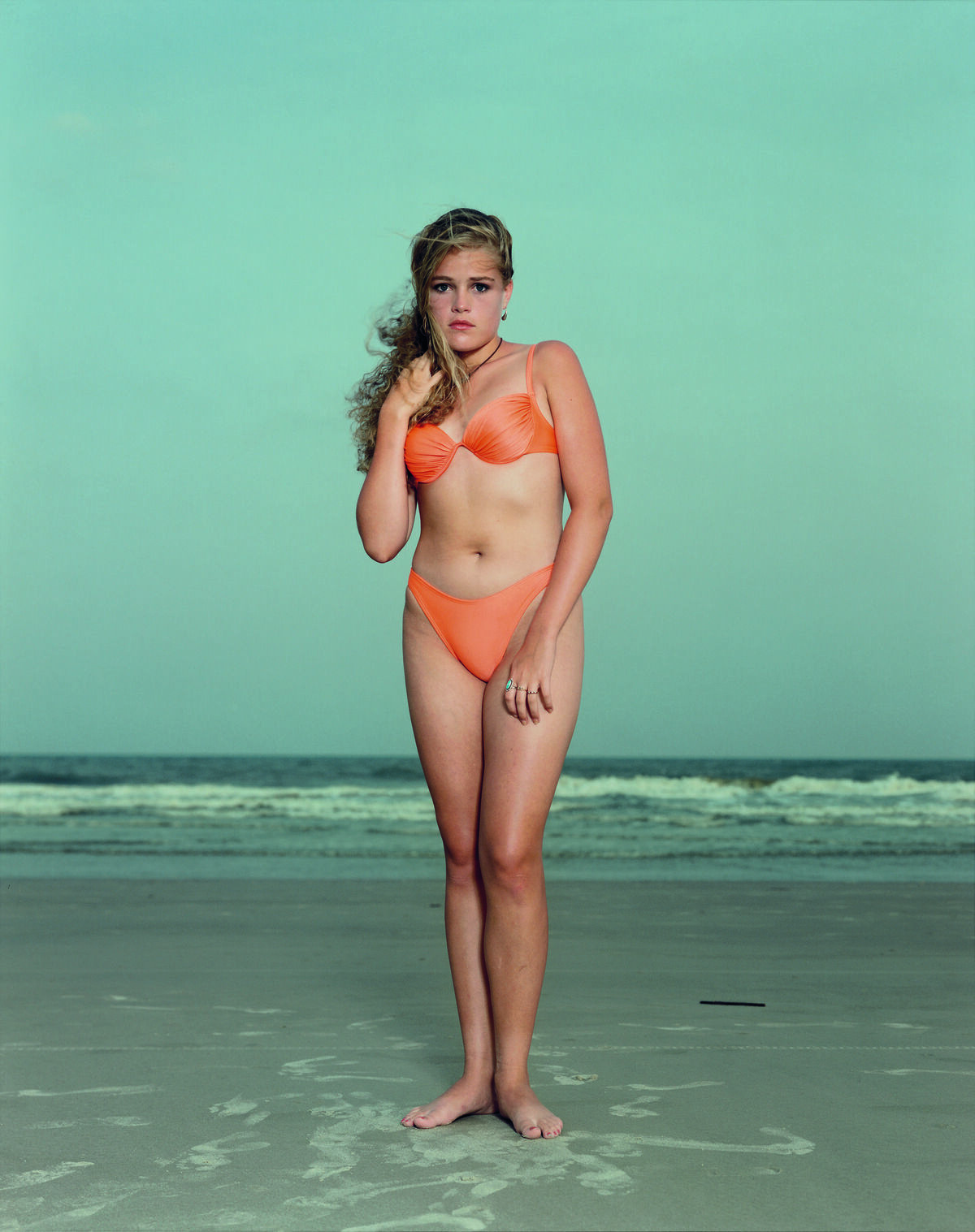 A woman stands wide-eyed and stark naked; she clutches a small baby, raw from birth, as blood streams from a patch of pubic hair under her still-protruding belly. In this photo, taken by
Rineke Dijkstra
in 1994, she looks exhausted, apprehensive, proud, and deeply happy all at once. This is Tecla, just one of the many female subjects the Dutch photographer has captured over the course of her career.
Dijkstra, who is based in Amsterdam, doesn’t only photograph women. Adolescent and teenage boys, as well as young male soldiers and bullfighters, have also sat in front of her analog camera. But it’s safe to say she’s engaged female subjects more often, and with greater breadth and depth. She’s documented girls and women in moments of great transition (in the throes of puberty, or just after giving birth); she’s also photographed them over time, as they age. A new book, WO MEN, gathers these images into a single tome.
Dijkstra began shooting portraits in the late 1980s when she was in her twenties, at first focusing on commissions for businesses and publications. One of these assignments led her into a building in the Dutch city of Leiden where Bosnian refugees were being housed en masse; she’d been asked to photograph the children living there. 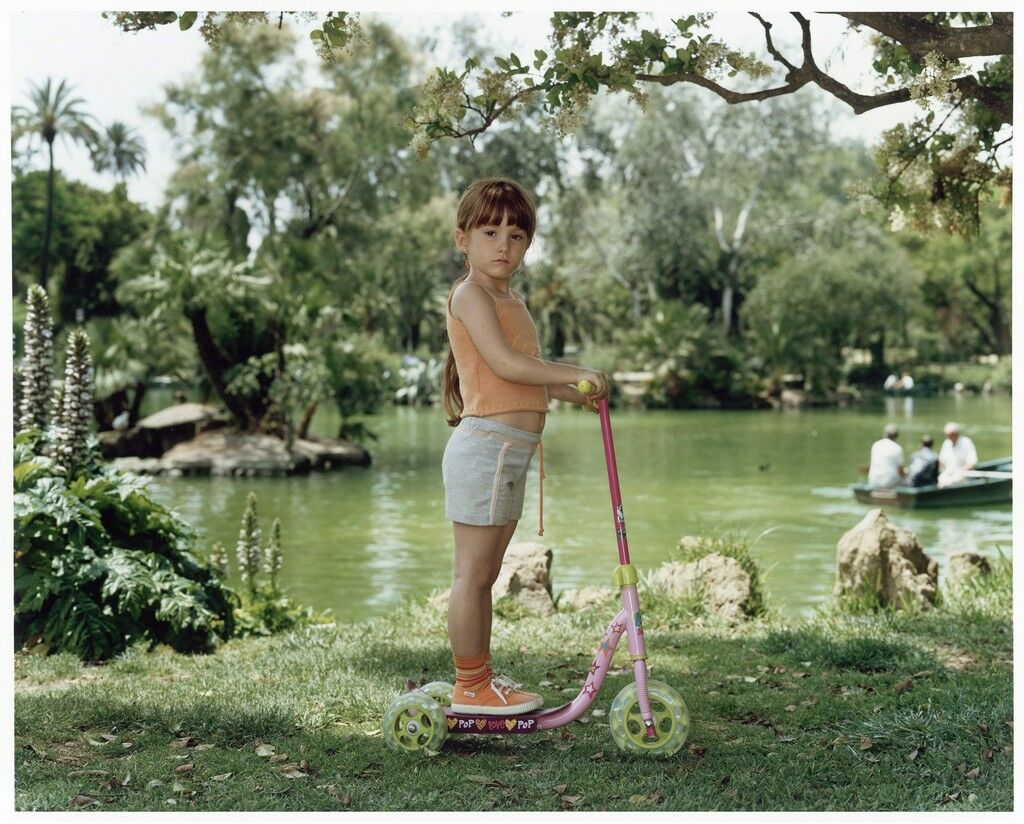 Rineke Dijkstra
Parque de la Ciudadela, Barcelona, June 4, 2005, 2005
Marian Goodman Gallery
An image Dijkstra took of one of the little girls, Almerisa, stuck with her. Two years later, the photographer tracked Almerisa down in a town on the outskirts of Amsterdam. That visit marked the beginning of an extended project Dijkstra has been working on for over 20 years: Since 1996, she’s arranged regular meetings with Almerisa to take her portrait.
The earliest photograph shows a child, no more than six, dressed in plaid skirt with a vest to match. Through Dijkstra’s images, we see Almerisa enter adolescence and begin to develop attitude. She starts posing for the camera instead of just sitting, hinting at the insecurities and self-consciousness that come with young adulthood.
By the early 2000s, she’s dying her hair, rimming her eyes in makeup, and wearing tight-fitting neon tank tops that declare her budding femininity. Later, we see signs of her life unfolding: a wedding ring on her finger, a belly bulging with pregnancy. By 2017, her pose is relaxed, and she’s dressed chicly in all black. 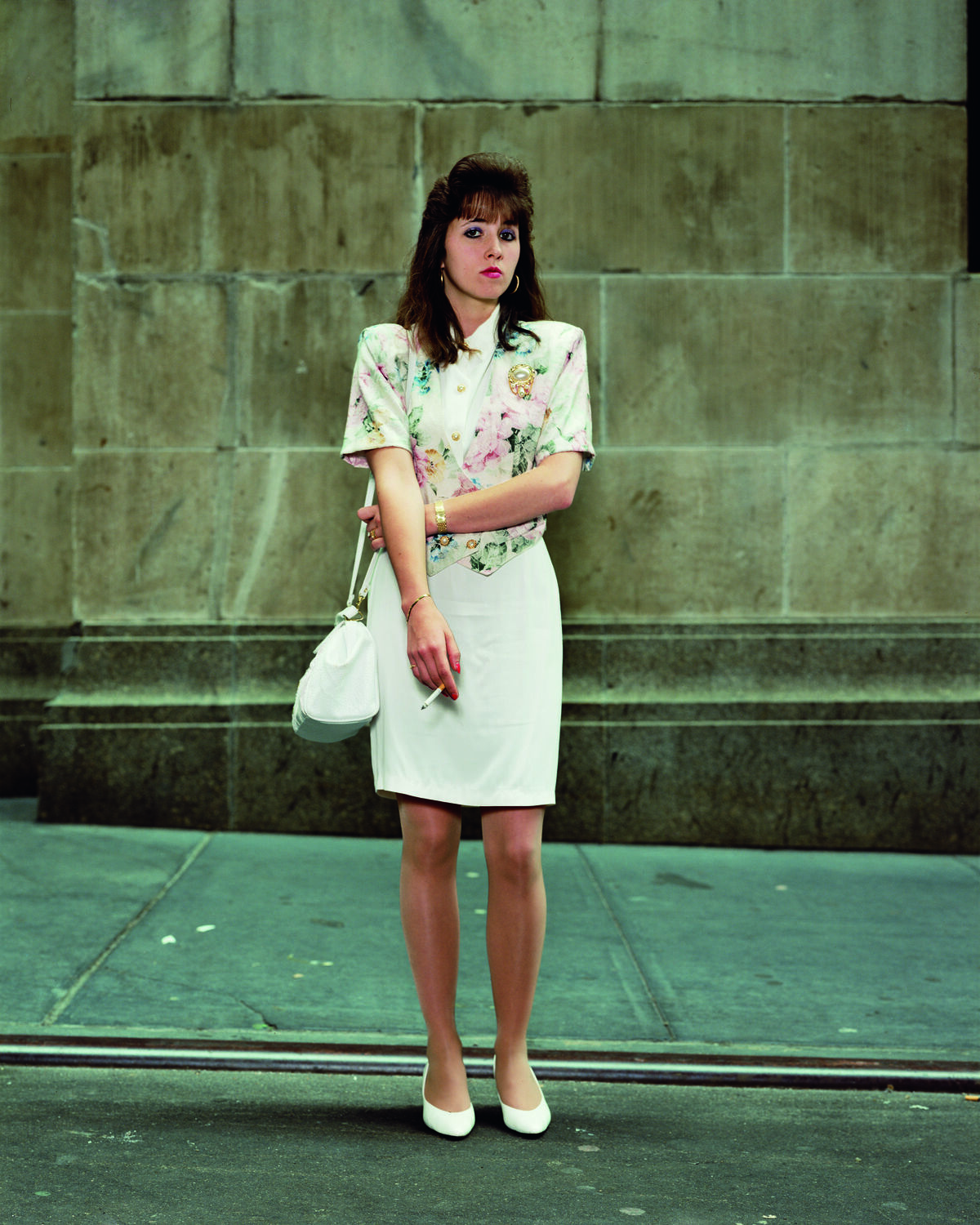 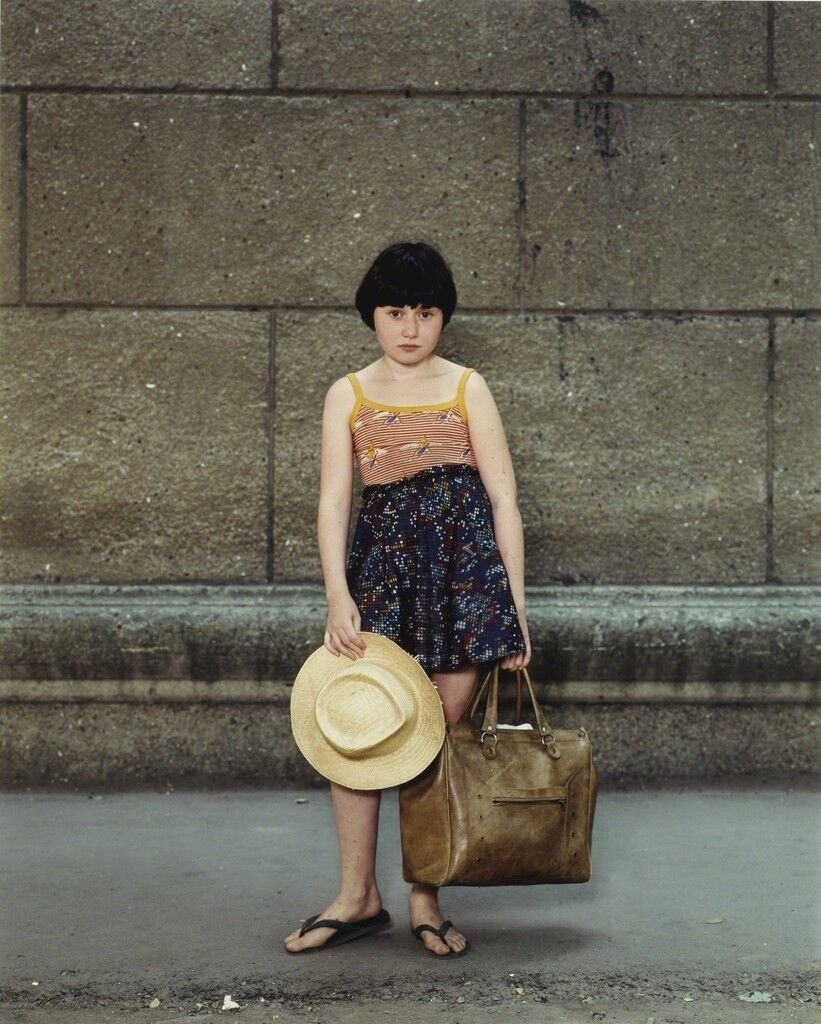 Rineke Dijkstra
Odessa, Ukraine, August 10, 1993
Sotheby's
Advertisement
The series tracks a host of momentous, intimate changes in one woman’s life—from moody teen to confident mother; from one culture to another; from displaced to very much at home.
Dijkstra’s early images of Almerisa coincided with another project, her “Beach Portraits,” which captured girls and boys on the awkward, precarious brink of puberty. Her first and most famous images from the series focus on young women. In one, Kolobrzeg Poland 26 July 1992, her subject’s gangly arms and legs extend from a light green one-piece. Her long frame, set off by a stark backdrop of sand, water, and sky, tilts to one side, as if she doesn’t quite know what to do with her fast-developing body.
Dijkstra refers to this series as a string of self-portraits, which revisit how she herself felt during the clumsy, confusing time between girlhood and womanhood. “They showed what we don’t want to show anymore but still feel,” she has said of the images, in conversation with Jennifer Blessing, the Guggenheim’s senior curator of photography. 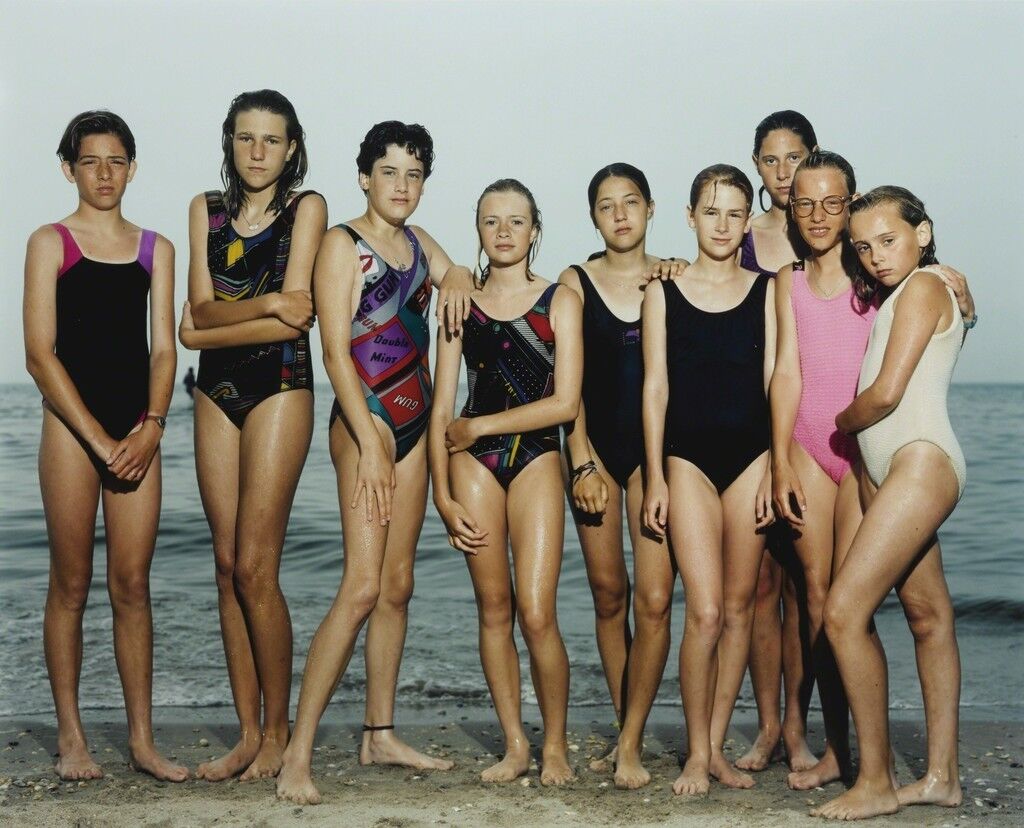 Rineke Dijkstra
Castricum aan Zee, The Netherlands, June 1992
Sotheby's
Dijkstra has explored this transition in other contexts, too. Throughout the 1990s and 2000s, she became fascinated with with teenage girls who frequented The Buzz Club and The Krazyhouse, two nightclubs in Liverpool, England. There, they danced ecstatically with friends and made out passionately with boys. Dijkstra wanted to capture the energy and elation they felt, so she built a studio inside the nightclub and began inviting clubgoers in to take their portraits.
In images like The Buzz Club Liverpool England 4 March 1995, Dijkstra shows young women against white backgrounds. They are often sweaty, pouting, and dressed in revealing outfits. Videos taken in the same clubs capture girls losing themselves to the music, transforming from nervously self-conscious to wildly unconstrained and confident.
These images (and all of Dijkstra’s work) reveal not only the overarching awkwardness, confusion, and thrill of a coming-of-age transformation, but also the emotional state of each individual. “Before our eyes, and quite unselfconsciously, we see subjects constructing themselves—revealing themselves in their very process of self-construction,” writes art historian Thérèse St-Gelais in Parachute magazine. 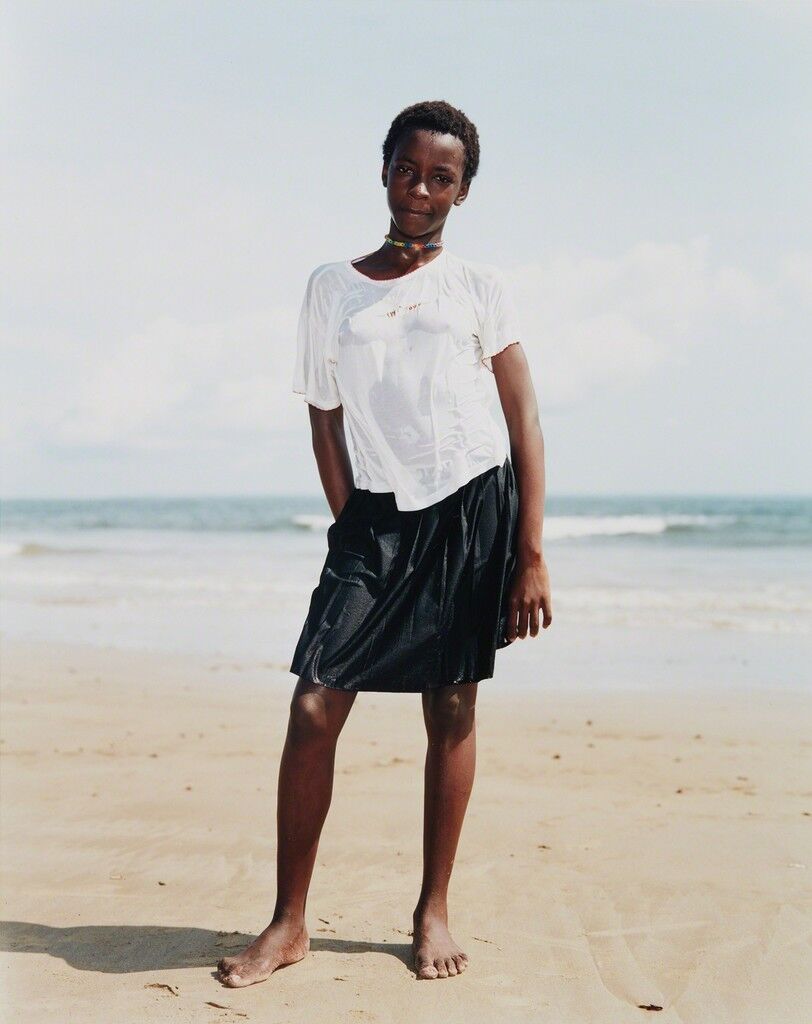 Rineke Dijkstra
Libreville, Gabon, June 2, 2002
Phillips
Nowhere is this quality more evident than in Dijkstra’s images of new mothers who were photographed just after giving birth. They stand naked against stark white backdrops, holding their new babies tightly to their chests. Saskia’s cheeks are still flushed, her belly seared with a cesarean scar, her small smile one of bliss tempered by exhaustion. Julie’s eyes are wide with shock and awe—perhaps at both her own resilience and the tiny creature squirming in her arms.
The portraits harness both the physical and emotional intensity of giving birth. “As a photographer you enlarge or emphasize a certain moment,” Dijkstra has said of the series. “In the photograph, you can scrutinize all the details…you can see things you normally would not pay so much attention to.”
Indeed, Dijkstra’s images, in which her subjects usually stand alone against monochromatic backdrops, demand attention. In this way, these women’s experiences—and the host of emotions that come with them—are spotlit with intimacy, empathy, and admiration.
Alexxa Gotthardt
Related Stories