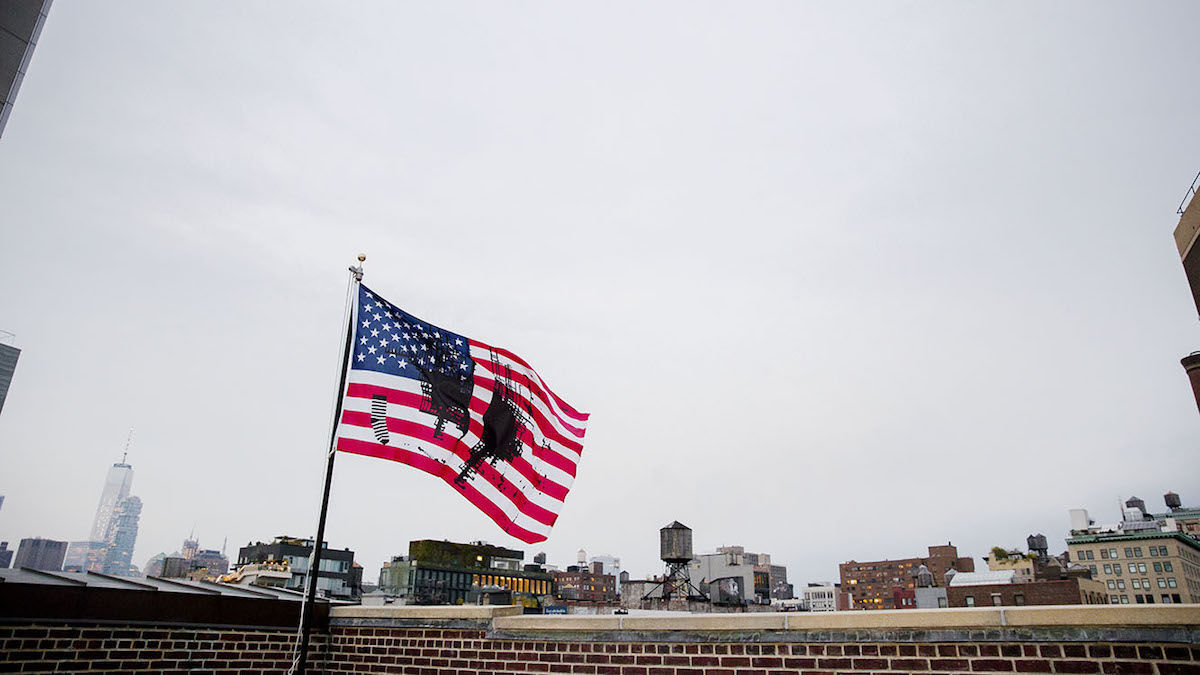 Artistic freedom protects high and low art alike; notions of “good taste” and artistic worthiness are the realm of the artist or curator, not the bureaucrat. But at a number of American universities, controversy has been acting as the curator, leading to the degradation of both freedom of speech and students’ ability to interact with challenging artwork.
The most recent campus to weigh artistic freedom against the demands of public pressure—and ultimately capitulate to the latter—is the University of Kansas (KU), where artist
Josephine Meckseper
’s reimagining of the American flag no longer flies.
Meckseper’s Untitled (Flag 2) (2017) is part of a series of flags commissioned by New York-based arts nonprofit Creative Time and titled “Pledges of Allegiance.” Meckseper has described her contribution to the series as “a collage of an American flag and one of my dripped paintings which resembles the contours of the United States.”
Meckseper further explained the work, stating that she “divided the shape of the country in two for the flag design to reflect a deeply polarized country in which a president has openly bragged about harassing women and is withdrawing from the Kyoto protocol and UN Human Rights Council.”
Meckseper’s focus on polarization proved prescient. Conservative critics were aghast at her flag, which soon became the center of attention of Kansas’s hotly contested Republican gubernatorial primary.
Days after the flag was raised, government officials in Kansas began calling for its removal. Secretary of State and gubernatorial candidate Kris Kobach called the display of the flag “outrageous” and demanded that the university “take down that flag right away.” Not to be outdone, Governor Jeff Colyer released a statement on July 11th, calling it “disrespectful” and “absolutely unacceptable,” and also demanded its immediate removal. Colyer further ordered state employees to raise 19 additional flags around the capitol building to underscore his patriotic reverence. 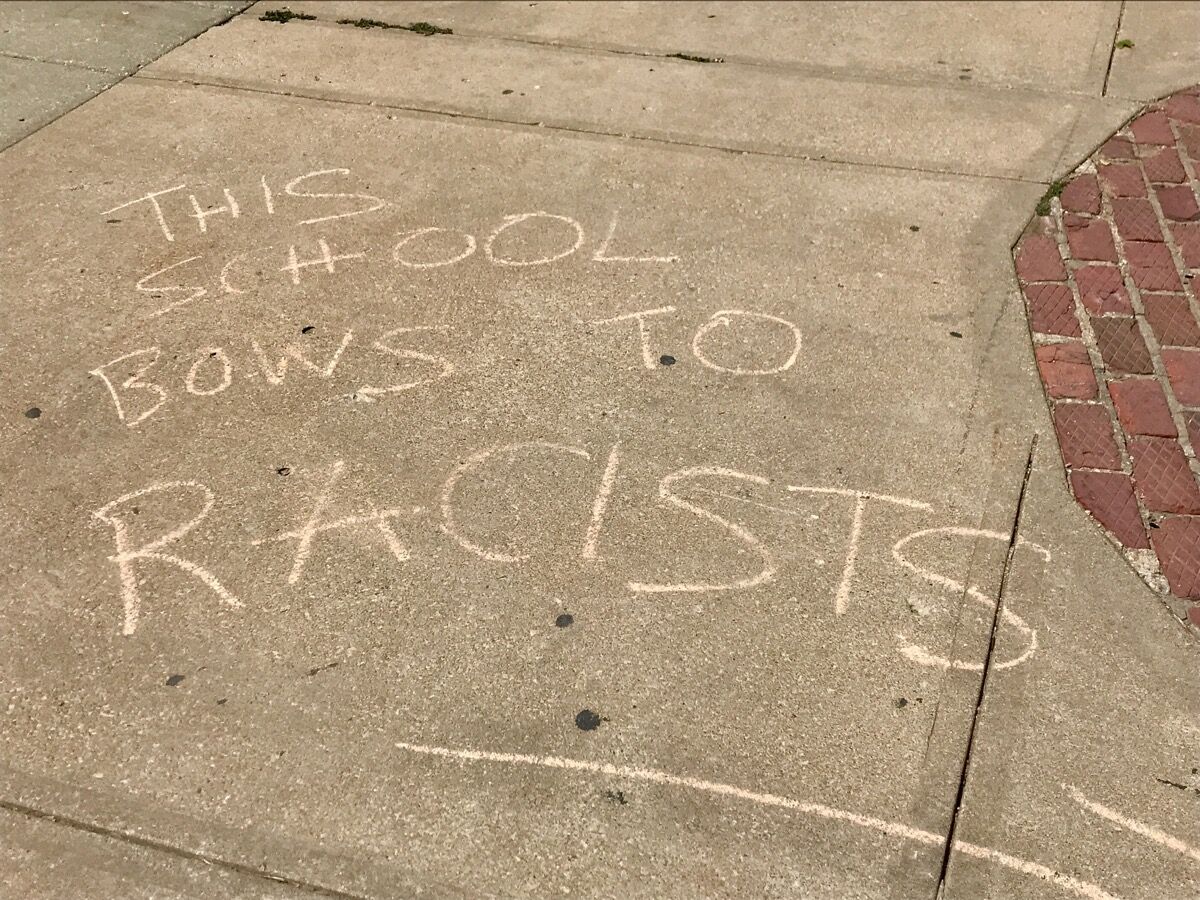 Protest graffiti left at the University of Kansas after Josephine Meckseper’s Untitled (Flag 2), 2017, was removed by administrators. Photo by John Hoopes. Courtesy of Foundation for Individual Rights in Education (FIRE).

Bowing to the combined pressure of public officials and angry tweets, university chancellor Douglas Girod directed the flag’s removal the same day, citing unspecified “public safety concerns” spurred by the controversy. (KU police investigated a threatening call made to the university, but deputy chief James Anguiano called it “more harassing than threatening.”) Girod moved the flag inside to KU’s Spencer Museum of Art, “where we can continue the important conversation it has generated,” he said.
For the governor, even that wasn’t enough. On a Fox News radio program, Colyer suggested that Meckseper’s “desecrate[d]” flag should be disposed of by the Boy Scouts, and that he was “happy to make that call.” Meanwhile, scrawled in chalk on the sidewalk adjacent to where the flag once stood were words of protest from the other side of the aisle: “THIS SCHOOL BOWS TO RACISTS” and “RIP FREE SPEECH.”
Just this week, the Foundation for Individual Rights in Education (FIRE), where I work, along with the National Coalition Against Censorship and the American Civil Liberties Union of Kansas, joined together to demand that KU oppose art censorship and restore the flag. (If you want to stand up against censorship at KU, you can use FIRE’s simple form to let administrators know you support artistic freedom.)
KU’s behavior is outrageous—but it’s nothing new. A new report released by FIRE surveys the landscape of nearly two decades of universities allowing controversy to dictate the works of art its students are allowed to see.
Take Salem State University in Massachusetts, for example. In 2016, the university asked artist Garry Harley to include work for an exhibition about the presidential election, entitled “State of the Union.” Harley’s contributions included mixed-media illustrations that incorporated images of a group of Ku Klux Klan members, as well as Jews arrested during World War II. To Harley, a clear line exists between the bigotry and oppression of the past and Donald Trump’s campaign rhetoric—and he sought to emphasize it. 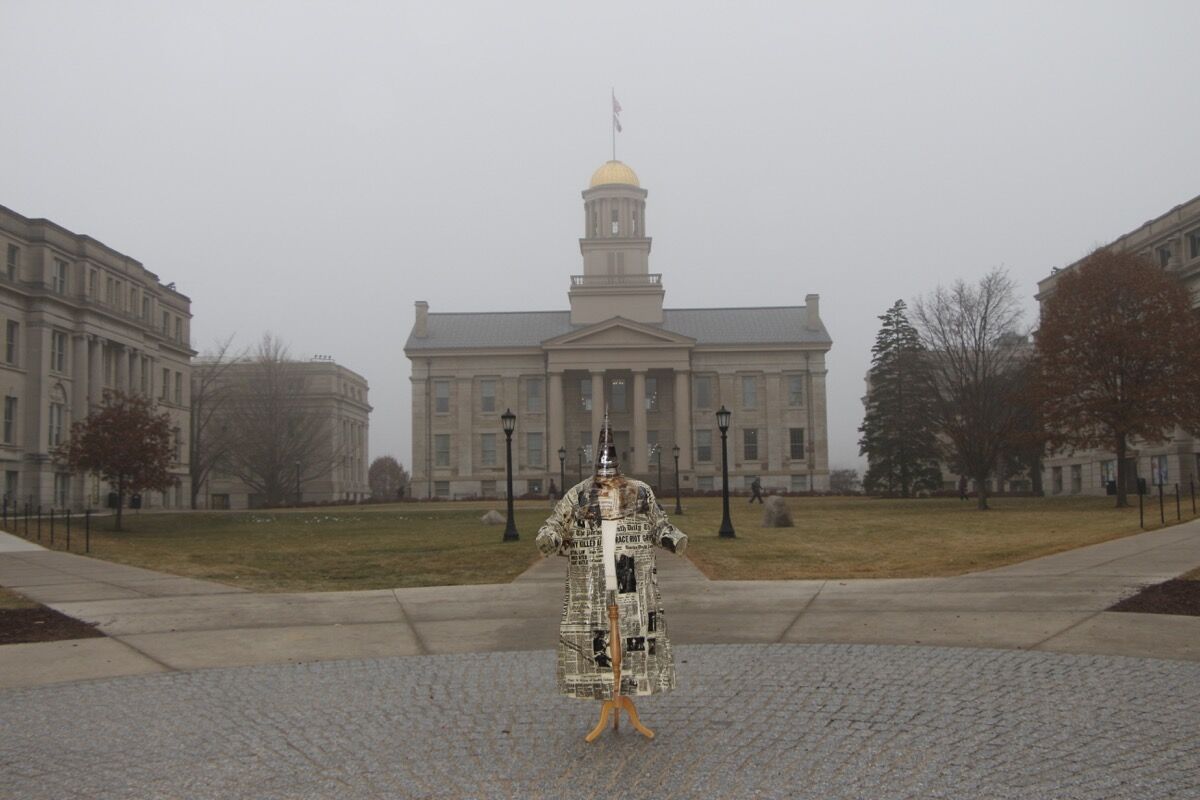 Installation view of work by Serhat Tanyolacar at the University of Iowa Pentacrest, 2014. Courtesy of the artist.

Advertisement
Students didn’t appreciate the way Harley conveyed that message, finding his depictions offensive and not “acceptable.” Salem State responded to their concerns by first covering the gallery’s glass doors so that the exhibition wouldn’t be visible from outside the space. The university then temporarily closed the show; later, it would reopen, but with curtains installed around the image of the KKK. Like KU, Salem State succumbed to outrage by hiding the piece and then later changing the means by which it could be viewed, seemingly confirming the notion that artwork should be feared, hidden—and only visible to those who seek it out.
A similar situation occurred at the University of Iowa in 2014, when visiting professor and artist Serhat Tanyolacar wanted to support the Black Lives Matter protests in response to the grand jury decisions in the Michael Brown and Eric Garner cases. In a public area of the school’s campus, Tanyolacar placed a sculpture of a KKK hood and robe covered in a collage of newspaper images depicting racial violence. Tanyolacar’s work was not sanctioned by the university, but he remained in attendance by the piece to explain its intent. His installation wasn’t there for long; that same day, university officials demanded that Tanyolacar remove the piece, which they deemed “divisive, insensitive, and intolerant.”
It didn’t matter that Tanyolacar was criticizing racism; what mattered was that his manner of doing so proved controversial. In an email to campus, vice president for student life Tom Rocklin explained that “UI respects freedom of speech, but the university is also responsible for ensuring that public discourse is respectful and sensitive.”
And in 2016, Winthrop University in South Carolina didn’t just censor a student’s controversial artwork—administrators threatened to expel her for making it. That year, students across the country were taking part in protests calling for the renaming of university buildings they felt were named after bigots. Samantha Valdez was one of those students. Along with artist collective Association of Artists for Change, Valdez created an installation featuring small figures hanging from the trees outside Winthrop’s Tillman Hall alongside a sign that read “Tillman’s Legacy.” (Benjamin Tillman was South Carolina’s governor from 1890 to 1894, and his time in office saw an increase in the lynchings of African-Americans.) 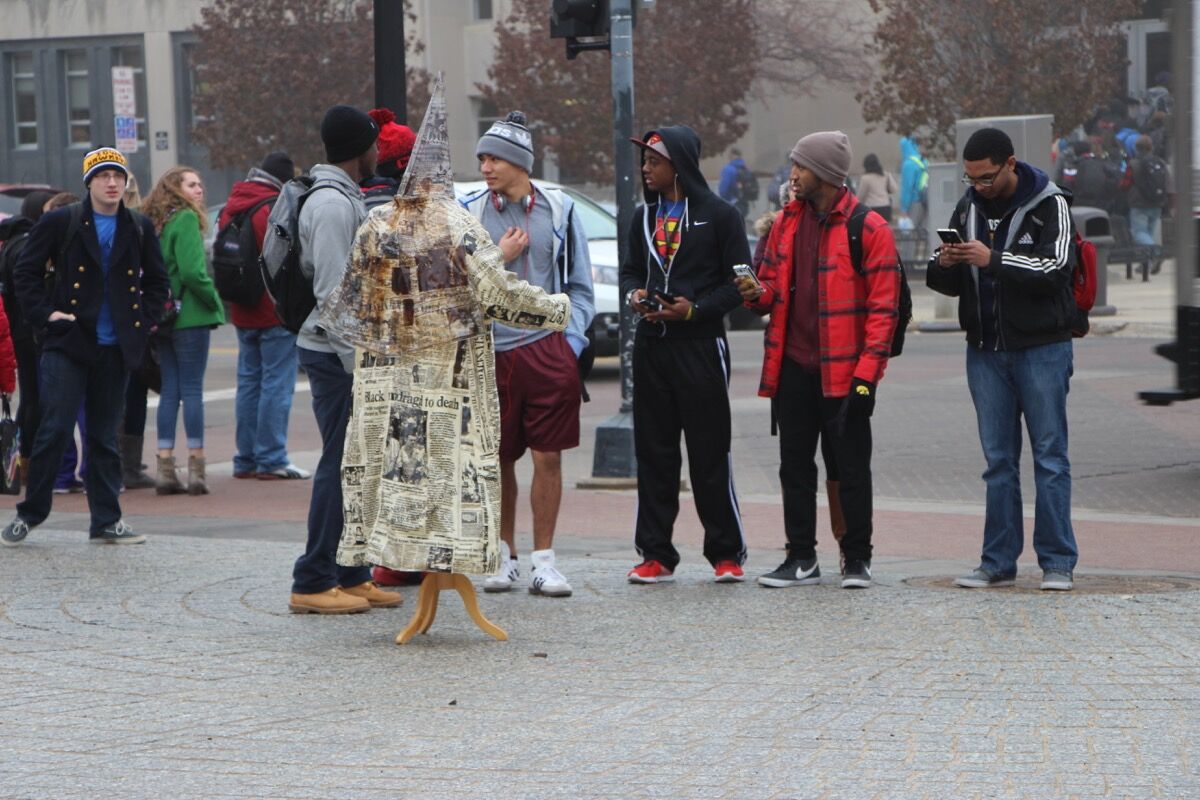 Installation view of work by Serhat Tanyolacar at the University of Iowa Pentacrest, 2014. Courtesy of the artist.

Campus police launched an investigation, and the university informed Valdez that she faced suspension or expulsion. Winthrop did not commission Valdez’s installation, and was under no requirement to leave it on display, but the First Amendment forbids the university from punishing Valdez because some students found her artwork offensive. With FIRE’s help, Valdez was cleared of the charges. However, had Winthrop not let outrage guide its decision-making, Valdez wouldn’t have had to fear that her educational career was coming to an end in the first place.
What lessons can we learn from KU, Salem State, the University of Iowa, Winthrop, and the many other campuses where offense and controversy—not artistic sensibility—dictated what may be displayed?
The first lesson: The image many universities are most willing to protect is their own. Universities are happy to offer flowery promises of freedom of speech, but less interested in backing them up. In an era where it can take only minutes for a minor controversy to turn into a hashtag, universities too often fall prey to the notion that what matters most is appeasing anger—and ending headaches—rather than protecting expressive rights that the university is morally, and often legally, bound to uphold.
The second: Controversies, and the predictable surrender that follows, happen to both artwork that inspires us and artwork that disgusts us. The challenge we all face is supporting the right to artistic expression in both of those cases. Too often, we forget that a defense of the right to deface a flag is a defense of the right to raise one, too.
When administrators succumb to censorship demands, they do exactly what they shouldn’t: encourage the idea that the only artwork worth seeing is that which is deemed palatable to the most powerful or the most sensitive among us. Art should not need to abide by a subjective standard of respectfulness to be allowed on campus. Universities, and the people who run them, must develop the courage to stand up for expression in the face of outrage. But it’s on all of us to stop providing the demands for censorship that schools are so willing to bow down to. Until then, unfortunately, art will keep coming down.
Sarah McLaughlin is a senior program officer at the Foundation for Individual Rights in Education (FIRE).
Correction: A previous version of this article contained an error incorrectly naming the University of Illinois as the site of a free speech controversy. The correct institution is the University of Iowa. This article has been edited to reflect the change.
Related Stories