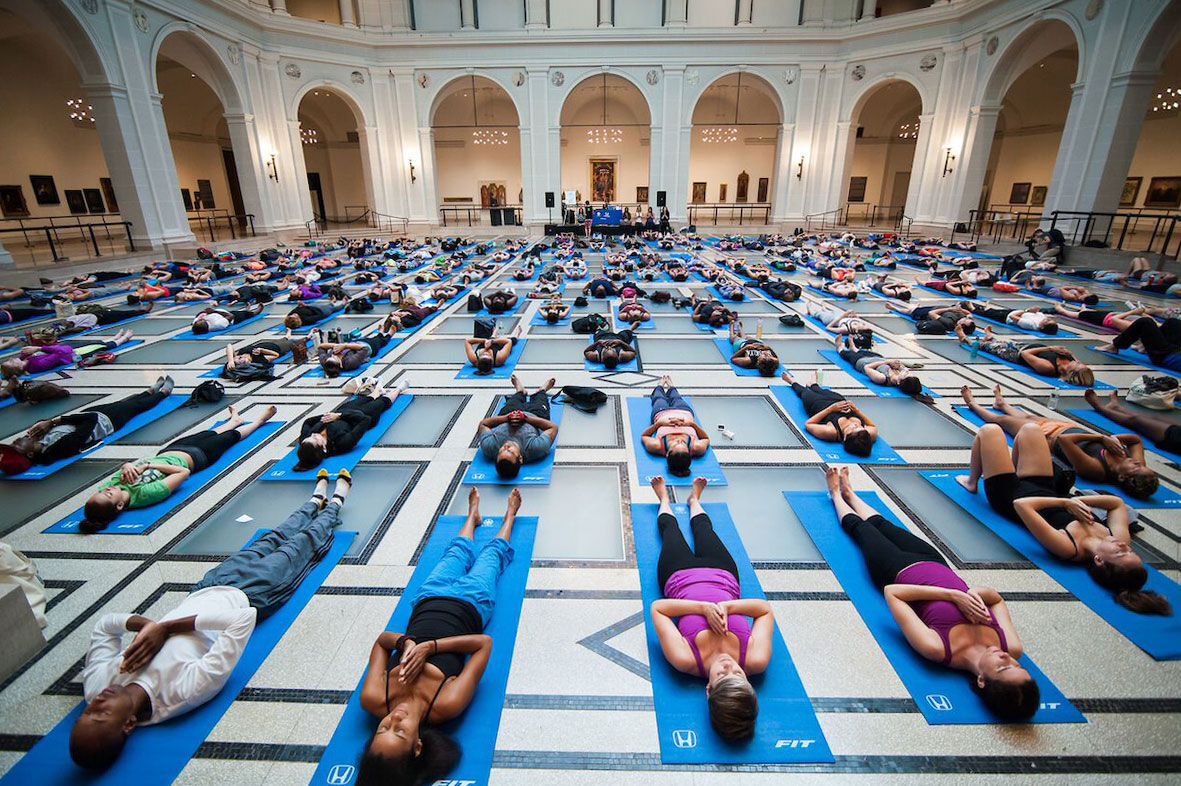 A calisthenics circuit around the Metropolitan Museum, interval training at the Berlin Biennale, yoga among the statues in the Beaux-Art Court of the Brooklyn Museum or in the halls of London’s Victoria and Albert Museum: Fitness has, over the past year, crept ever more directly into museums, spaces which for centuries have been temples to stillness. No longer content merely to gaze upon paintings and sculptures of perfected bodies, viewers seem increasingly interested in going to art institutions to imitate them.
The dance company Monica Bill Barnes & Company and writer-illustrator
Maira Kalman
collaborated to create the Met’s Museum Workout. Among other things, it was a sign that the New York institution is seeking more audience participation, as it grapples with financial difficulties.
Held over the first three months of 2017, the workout was billed as an interactive tour, in which a dancer and choreographer in sequined dresses led participants through the galleries while jogging, jumping, high-stepping, arm-swinging, and marching with hands on heads like kindergarteners being led to lunch—all to a soundtrack.
Before the tour kicked off each day, participants were told that, ideally, each would “feel as if you’re taking this glorious walk through nature, so there isn’t this obligation to understand anything or to know anything.”
It’s an excellent aim: Too often, museum visitors feel compelled to ferret out the “meaning” of a work or rush to form judgments about it, instead of simply enjoying the work in the present moment, the way one might behold a forest or the horizon. But treating art like nature also implies a sort of passivity toward it; it means the participants are interacting with the tour-cum-workout’s leaders, rather than the works themselves. It treats the artworks as a setting, rather than as pieces to behold and think about. 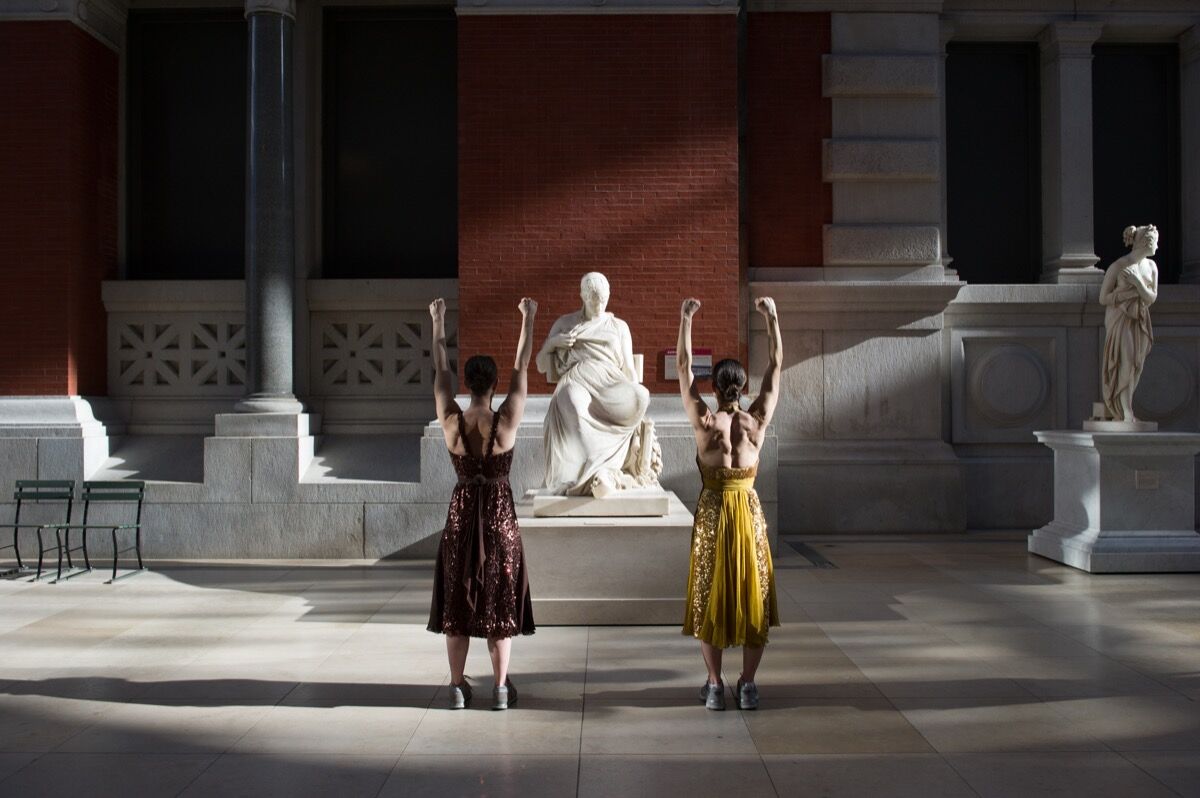 Interactivity isn’t an inherent virtue, merely because it’s a buzzword. But museums’ desire to lure larger crowds from wider backgrounds (a good thing) is driving them to embrace strategies honed within the so-called experience economy. This has led them to build interactive works as well as extra-artistic events into their programs. But there is a danger in this embrace of activity within museums that institutions will lose their traditional role as places of quiet contemplation, as a refuge from the economic world and the need to get things done.
Nik Kosmas’s contribution to the 2016 Berlin Biennale was all about getting work done. The three structures Kosmas placed on the outdoor deck at the Akademie der Künste’s Pariser Platz location would have appeared ordinary in a gym. In the context of the biennial, however, they stood like monuments to practicality. The artworks—a power rack, a squat rack, and a rig, painted atypically in multiple bright colors—reflected an ambivalence about art that was present throughout the exhibition, which was curated by
DIS
, a collective that could be said to engage in cultural entrepreneurialism as much as art. (Another health-oriented work operated as a juice bar.)
Kosmas renounced his status as a visual artist in 2013 to turn his attention to business and other projects. Yet he continues to produce objects that would likely still be seen as sculptures when presented in an art context. To combat this, Kosmas’s structures for the Biennale were explicitly not presented as “a statement, installation, or performance,” according to the exhibition’s website.
Instead, they served as tools (or in some cases as backdrops) for a series of “Open Workouts” led by people who, like Kosmas himself, have what he calls a “a spirit that doesn’t fit into the ‘mainstream’ of fitness or art.” Kosmas says he prefers to operate in “a grey zone” and worried that, given the art context, his workouts might too easily “turn into a performance, or a parody.” 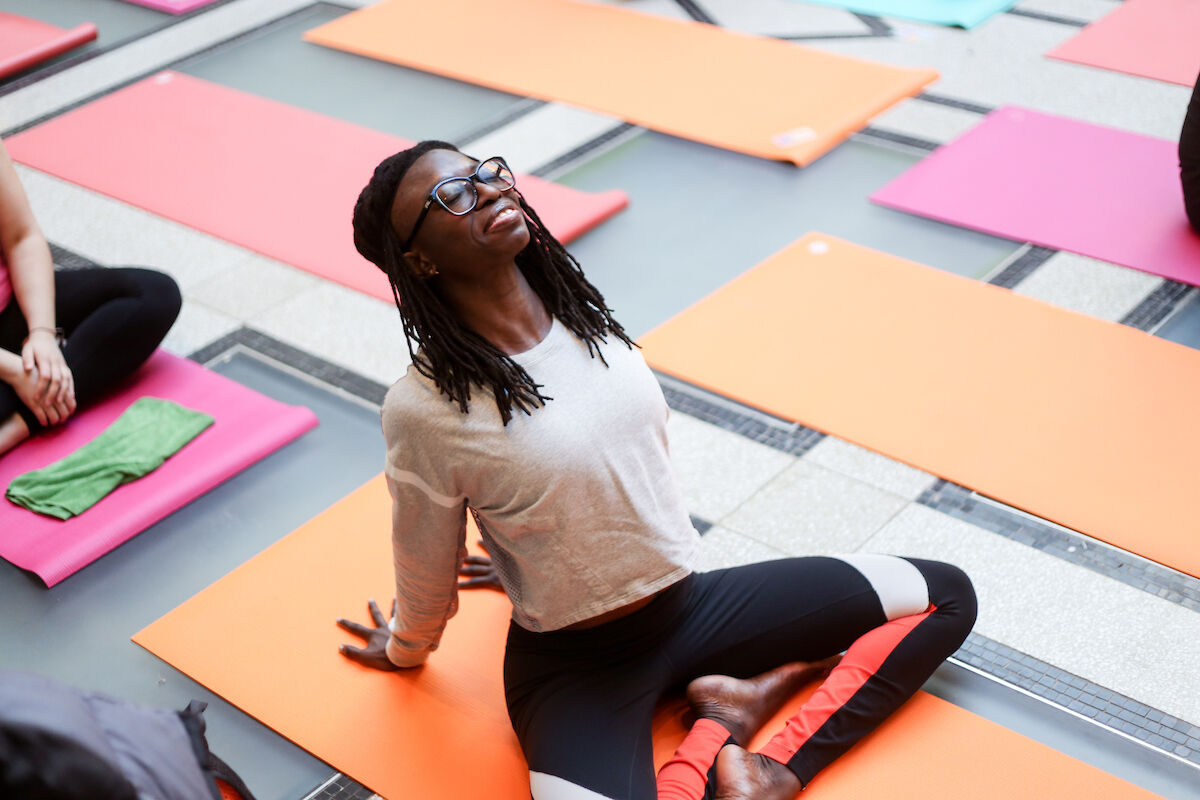 Advertisement
As such, we might assume the project sought to get art-world denizens moving. (They are, after all, not the fittest group of people on average, in my experience.) But the workouts seem equally effective at quelling a specific anxiety: that merely contemplating a painting or sculpture might be a time-wasting, unproductive, inefficient use of the day. Shouldn’t we be doing something instead of just looking, the workouts ask. And, by extension, should all our interactions with art be more businesslike?
It could also be the other way around: that these sweat-inducing artworks get us to move in order to be more contemplative? That would seem to be the point of the Victoria and Albert Museum’s Saturday morning yoga classes, which are followed by a gallery tour called “The Story of Personal Transformation through Art.”
Exercise improves cognition by increasing blood flow to the brain and it boosts concentration and memory by stimulating the release of a protein called brain-derived neurotrophic factor. So, looking at art immediately after a workout will, generally, allow you to reflect on it with greater focus.
That workouts would become artworks seems a natural progression, given that the body has been a subject of art since we first put handprints on cave walls. But, to the extent that art institutions are using exercise as a form of therapy to address our neurotic inability to focus—to help us be mindful, to use the current cliché—should concern us.
In getting physical we ought not take our eye off the wall.
Daniel Kunitz
Related Stories