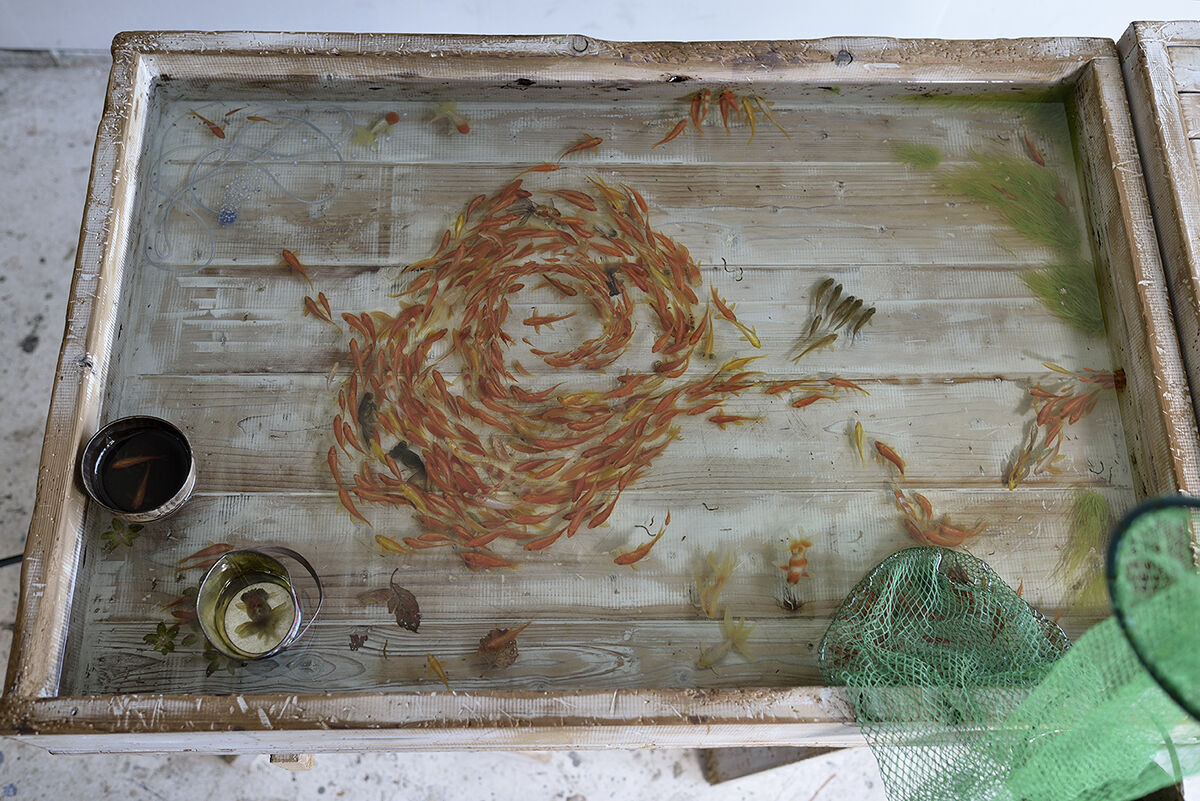 Riusuke Fukahori, The Ark (detail), 2015. Courtesy of Joshua Liner Gallery and the artist.

“Goldfish Salvation,” the title of
Riusuke Fukahori
’s new exhibition, is exactly what it sounds like. The show references a time of self-doubt and uncertainty within the Japanese artist’s career and an epiphany he experienced upon winning a goldfish in a game of Kingyo Sukui at summer street festival in Japan. Fifteen years past this incident, the artist continues to paint goldfish in a repetitive, meditative-like manner; the fish have come to represent not only his own personal weakness but also that of humanity. 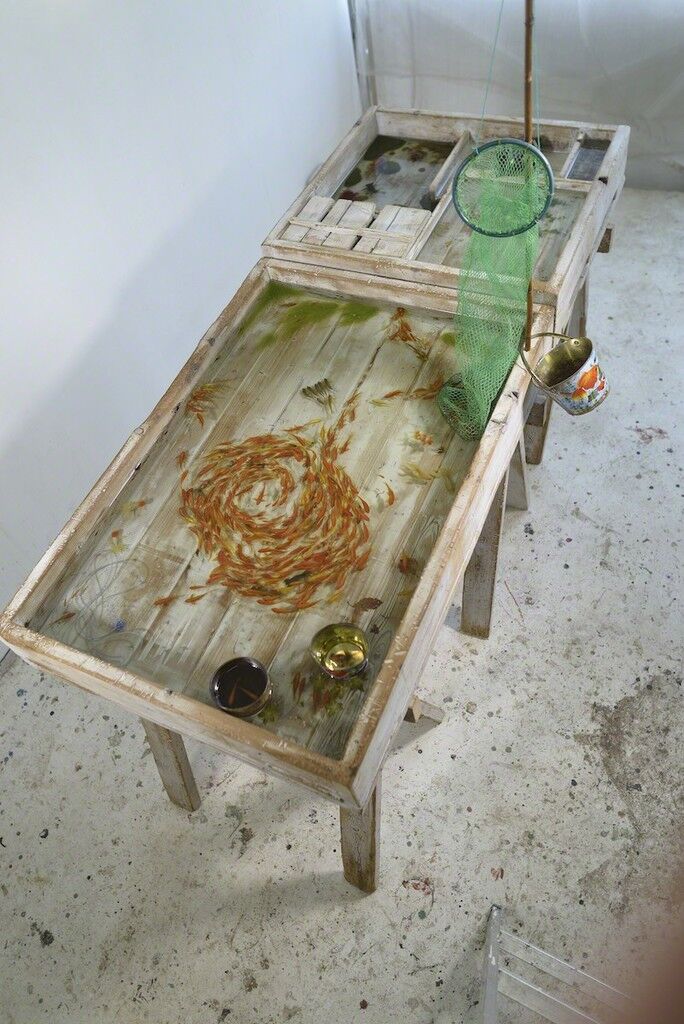 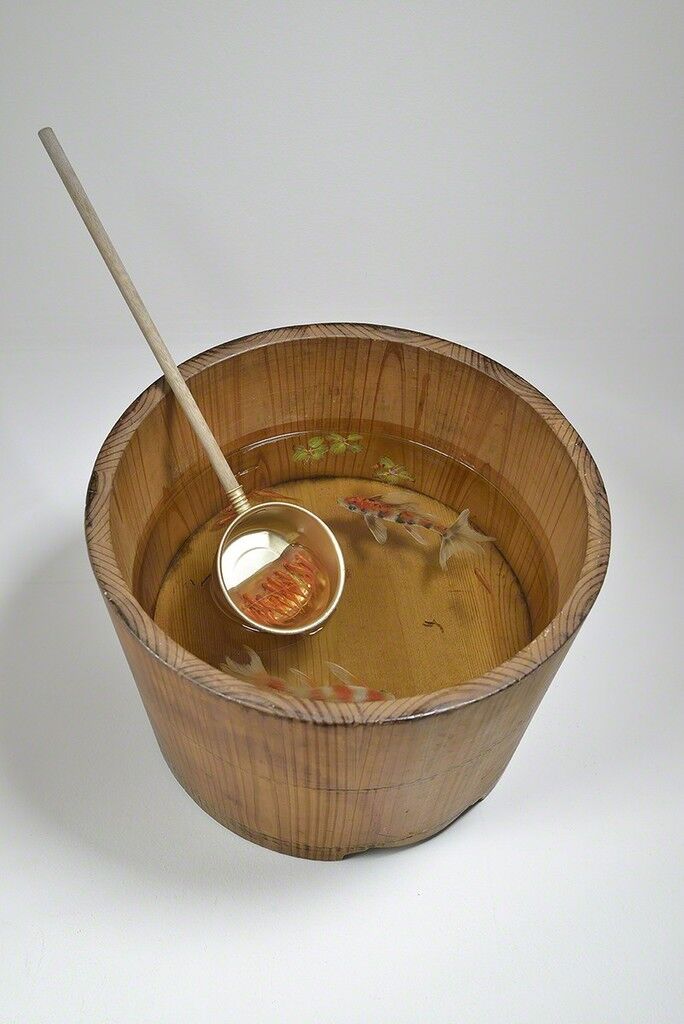 Riusuke Fukahori
Spring of the Moon, 2015
Joshua Liner Gallery
Now on view at Joshua Liner Gallery in New York, “Goldfish Salvation” features Fukahori’s amazingly realistic 3D acrylic and resin layered paintings of goldfish. “In the aquarium, similar to human society, there is a story of birth and death,” Fukahori has explained. “As long as they live, these goldfish will continue to soil the fish tank, and if not changed, the water will only get tainted leading to death for all the goldfish… I feel as though the fish tank is only foretelling what would happen to the earth in the future. We as human beings are the main source polluting our own air we breathe.” 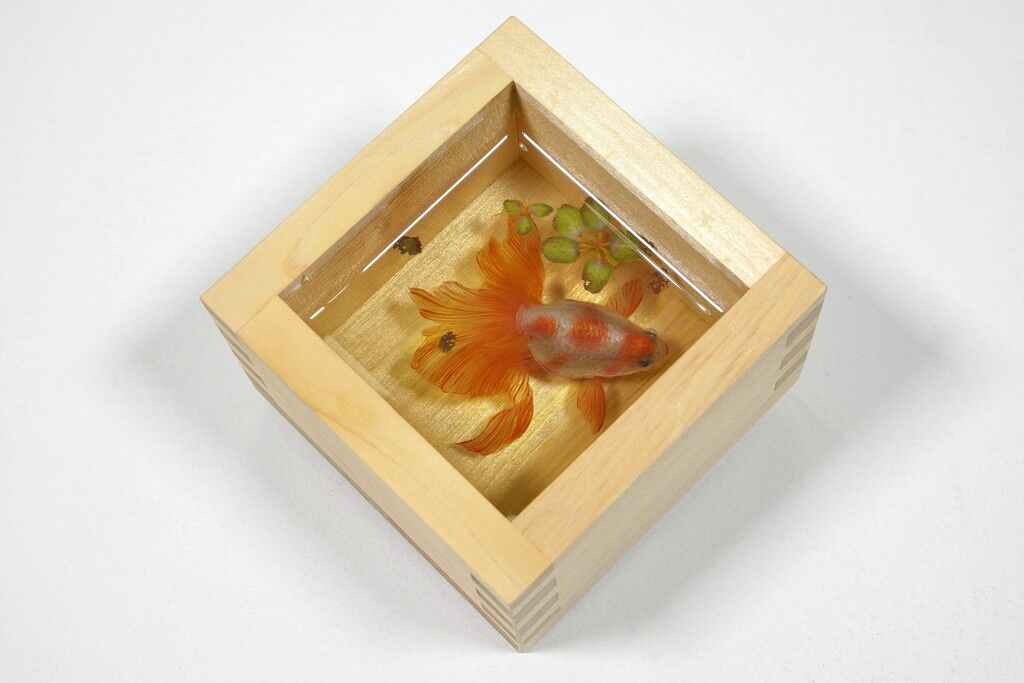 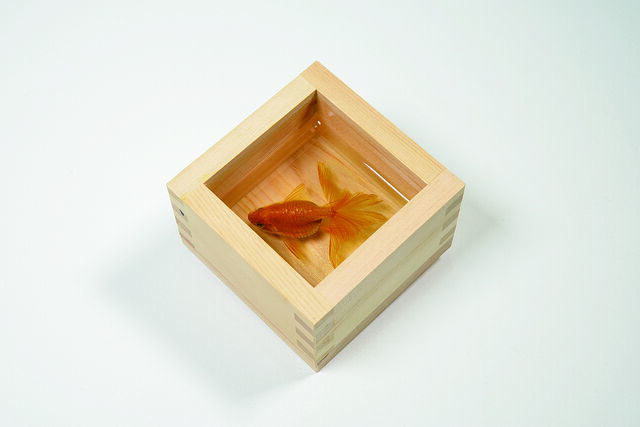 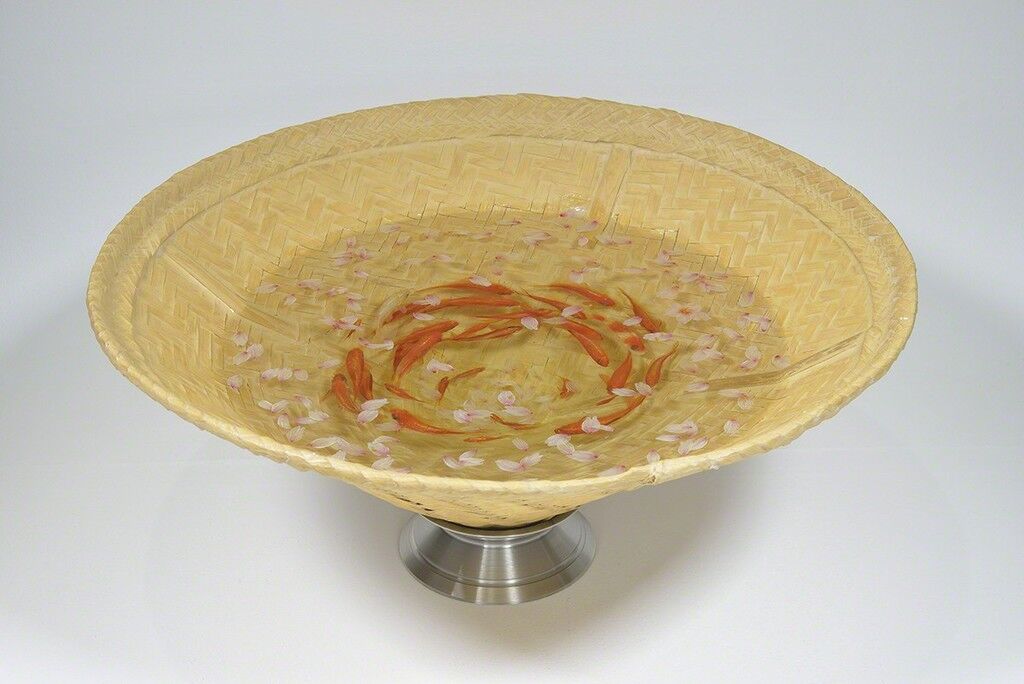 Riusuke Fukahori
Sacra, 2015
Joshua Liner Gallery
To create these works, Fukahori begins by pouring a layer of resin into a vessel—such as a traditional Japanese cypress sake cups or a bamboo hat—and lets it dry for two days. He then painstakingly paints a layer of the fish’s fins, and repeats this process, adding more layers of resin and elements of the fish’s body until the work is complete. The resulting effect is surprisingly lifelike and completed with seasonal fish-tank flora. One of Fukahori’s Kingyo (which means goldfish in Japanese) sake cups can take two months to complete; his larger works take much longer. This exhibition features the artist’s largest work to date, Kingyo Sukui (The Ark) (2015), and Fukahori’s first foray into video—a piece inspired by the Japanese 11th-century poet Kamo-no-Chomei and an extension of his “Four Seasons of Rain” series (2015), which is also featured in the show. 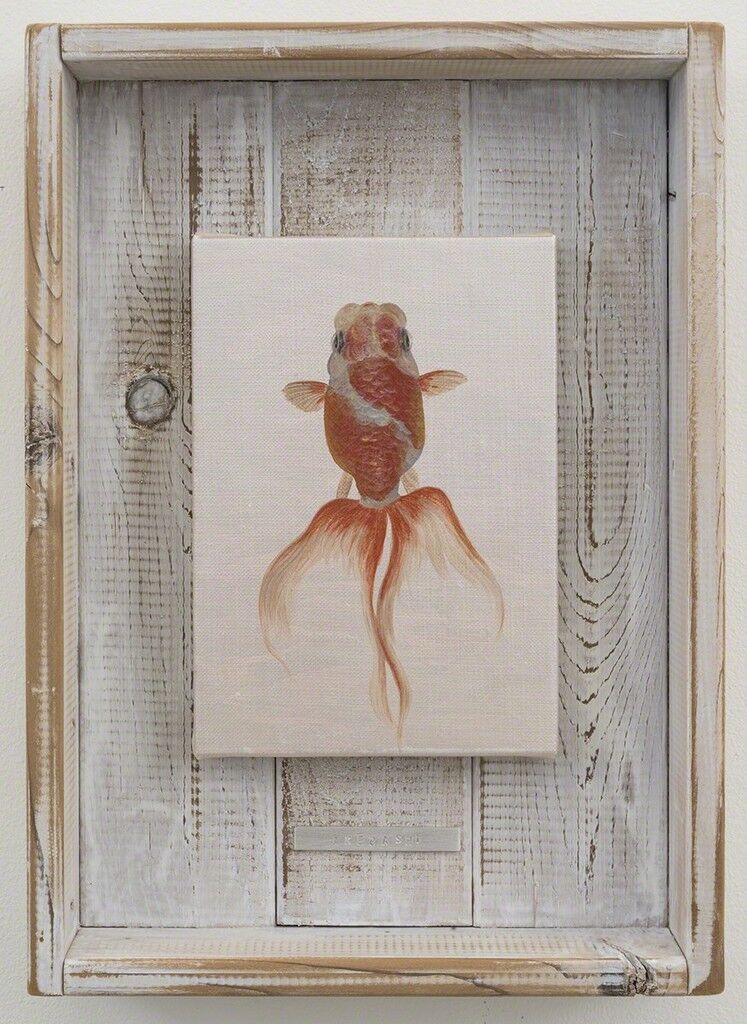 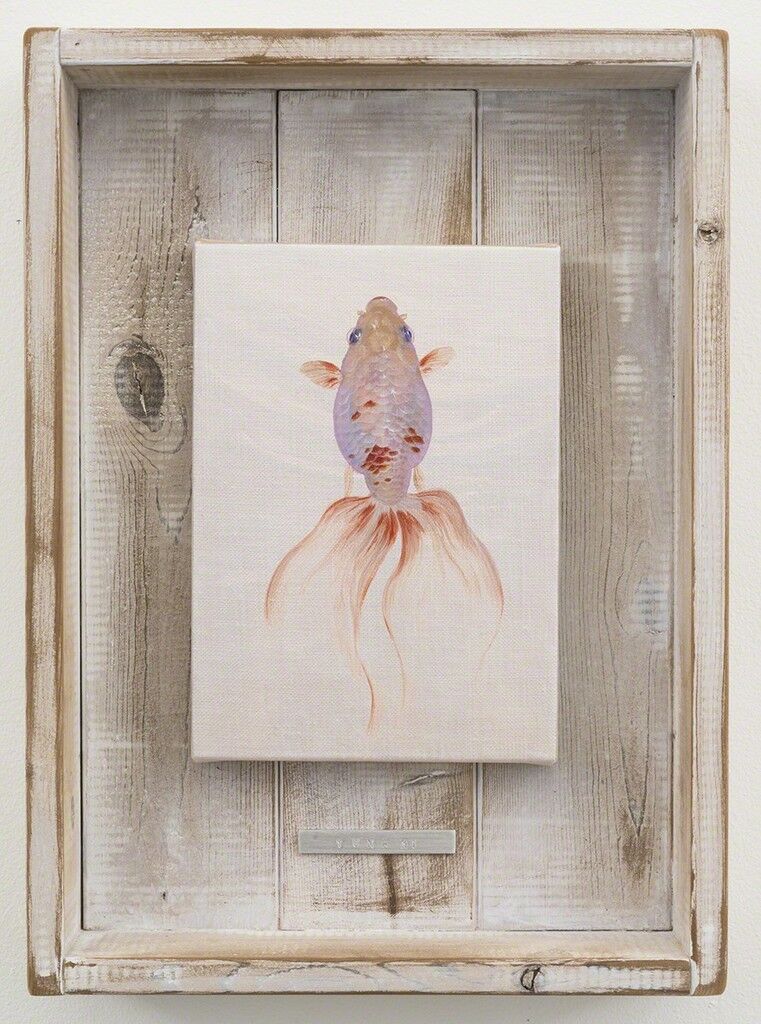 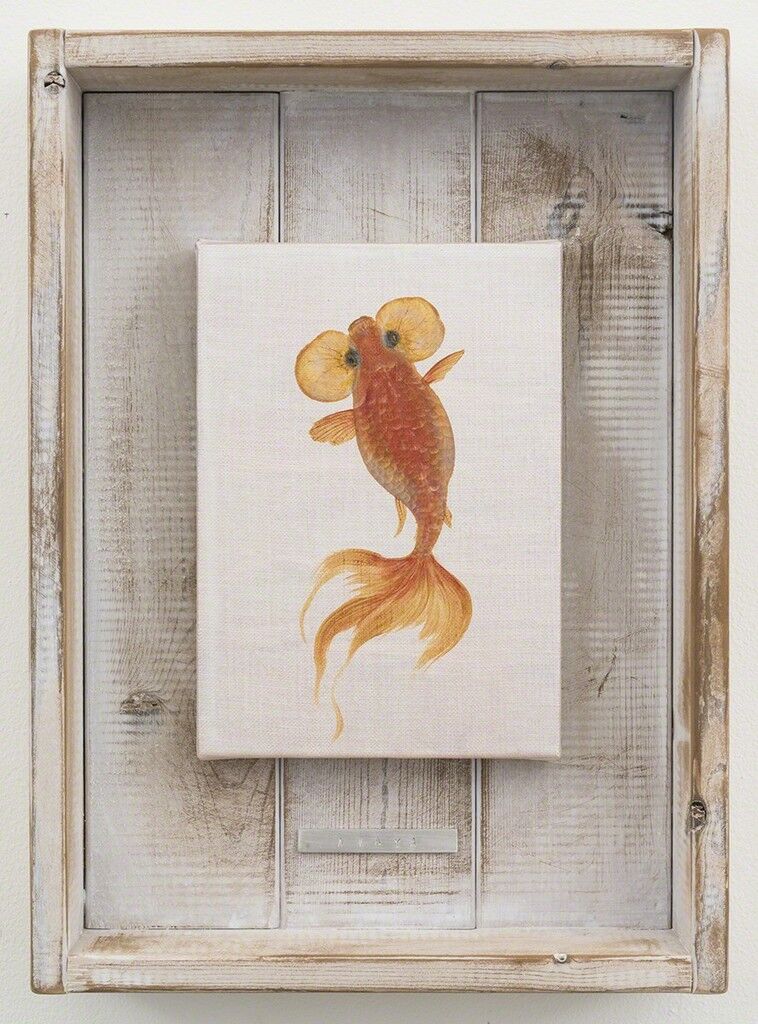 Riusuke Fukahori
Awaya, 2015
Joshua Liner Gallery
Unsurprisingly, the Yokohama-based artist’s studio is filled with dozens of fish in tanks and bowls, which he observes and sketches. And his fascination with the organisms is unwavering. Fukahori reflects, “To me, goldfish are everything. By acknowledging their presence, I was able to proceed to a deeper level of expressionism... I have been trying to figure out why I felt the passion that fell upon me and will continue my journey to find the answer.”