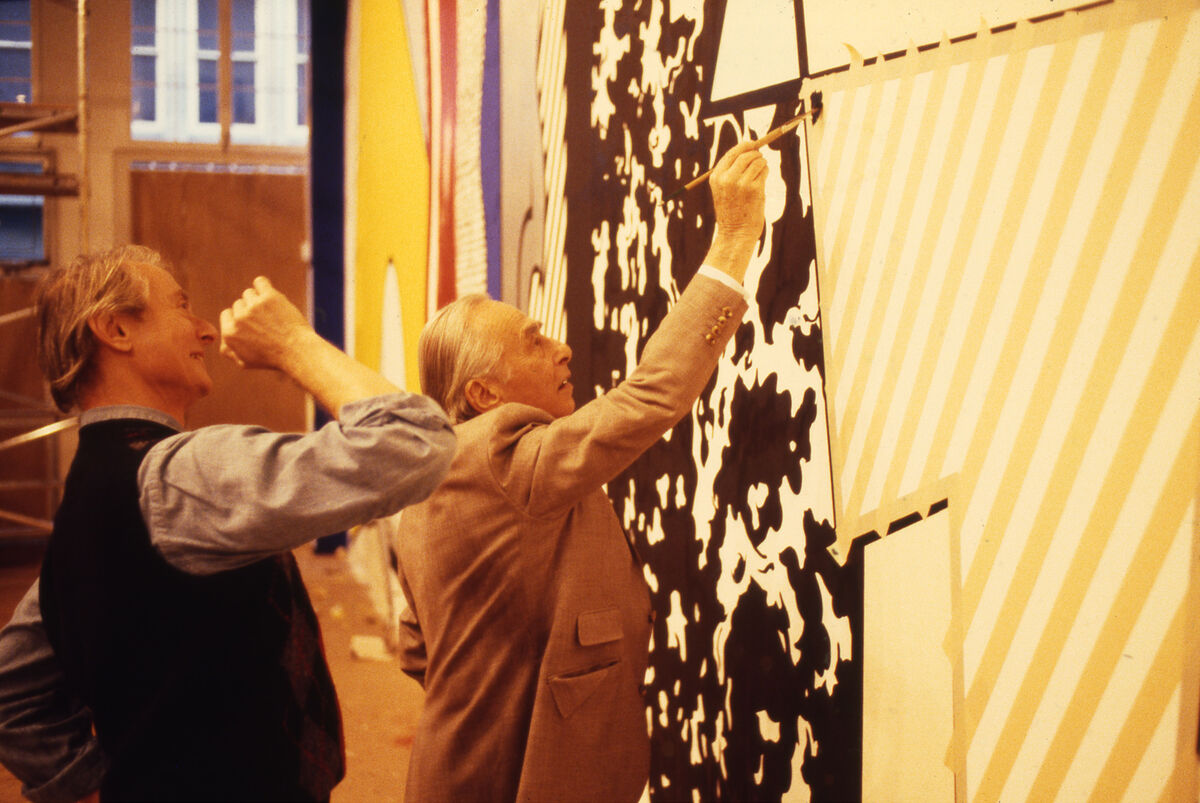 Early in the summer of 1983, upon hearing that
Roy Lichtenstein
was opening a new studio in New York, Rob McKeever gave the artist a call, offering himself up as an assistant. “He said he wasn’t ready yet, but to keep in touch with him,” McKeever recalled. “I would call him periodically over the summer, and then by around November, he was ready. So I went down there and started working for him in the afternoons.”  Lichtenstein’s studio was on 29th Street and Park Avenue at the time, but McKeever’s first few weeks on the job were mostly spent in Soho, at Leo Castelli’s Greene Street gallery. Alongside the artist, fellow assistants
Brian O’Leary
and James di Pasquale, Dorothy Lichtenstein (the artist’s wife), and even Castelli himself, McKeever’s first task was to help create Lichtenstein’s now-historic Greene Street Mural (1983). And now, 32 years later, under drastically different circumstances, he’s done it again. 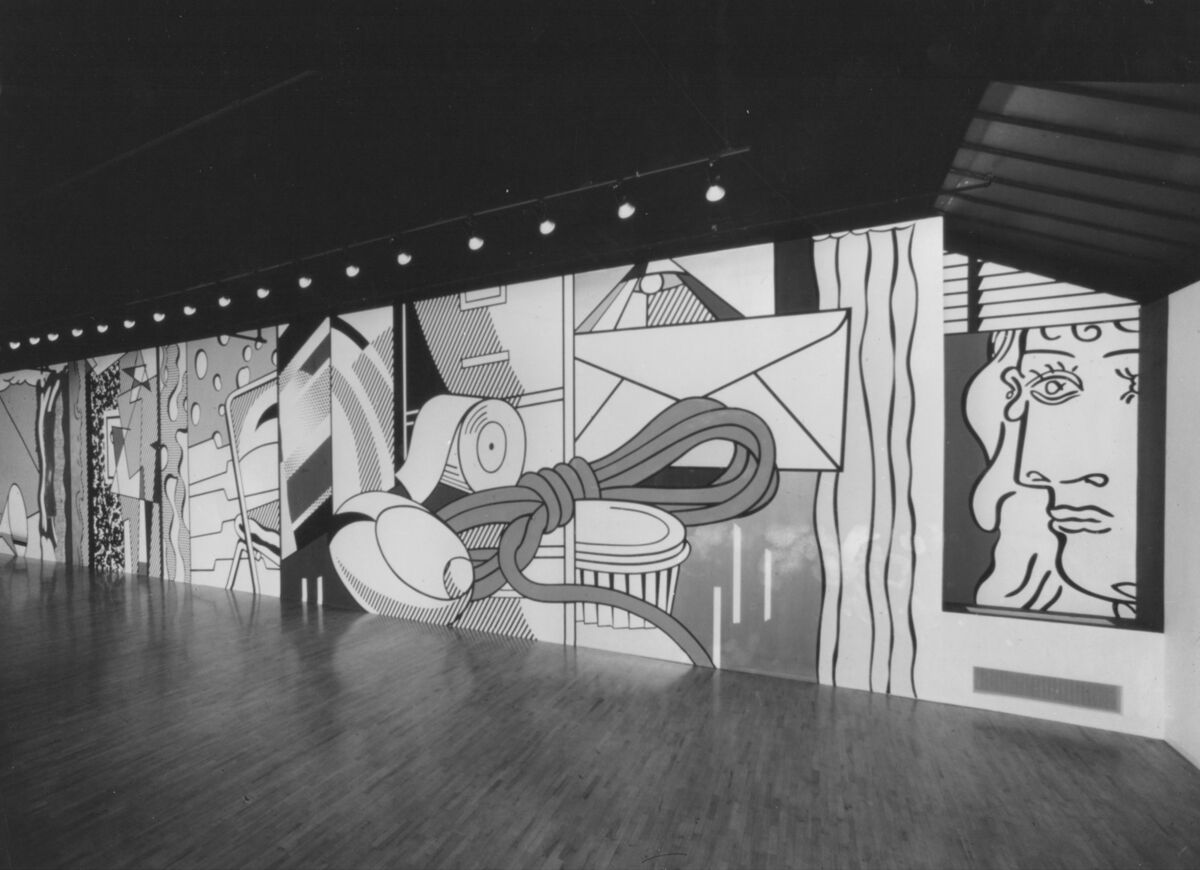 By now you’ve likely heard: Gagosian Gallery teamed up with the Roy Lichtenstein Foundation to produce a full-scale, site-specific replica of the Greene Street Mural to serve as the centerpiece of the 24th Street gallery’s September/October show. And as was the case with the original mural, the replica will be destroyed after the run of the exhibition—which closes next week.

The show is a glittering example of the gallery empire’s museum-quality, monumental exhibitions that delve into art historical moments, resurfacing artworks on a grand scale and at a pace that museums rarely match. When asked, “why now?” both McKeever and Gagosian’s Leta Grzan, who organized the show, said that it was simply a matter of timing. “The idea had been kicked around for years,” McKeever explained. “Every once in awhile people would say ‘Wouldn’t it be great if we could re-do the Greene Street Mural?’” With two years of breathing room following the 170-work-strong traveling Lichtenstein retrospective, organized by the Art Institute of Chicago, pinning the show to this fall provided ample time for the extensive research and planning required to execute the new mural. 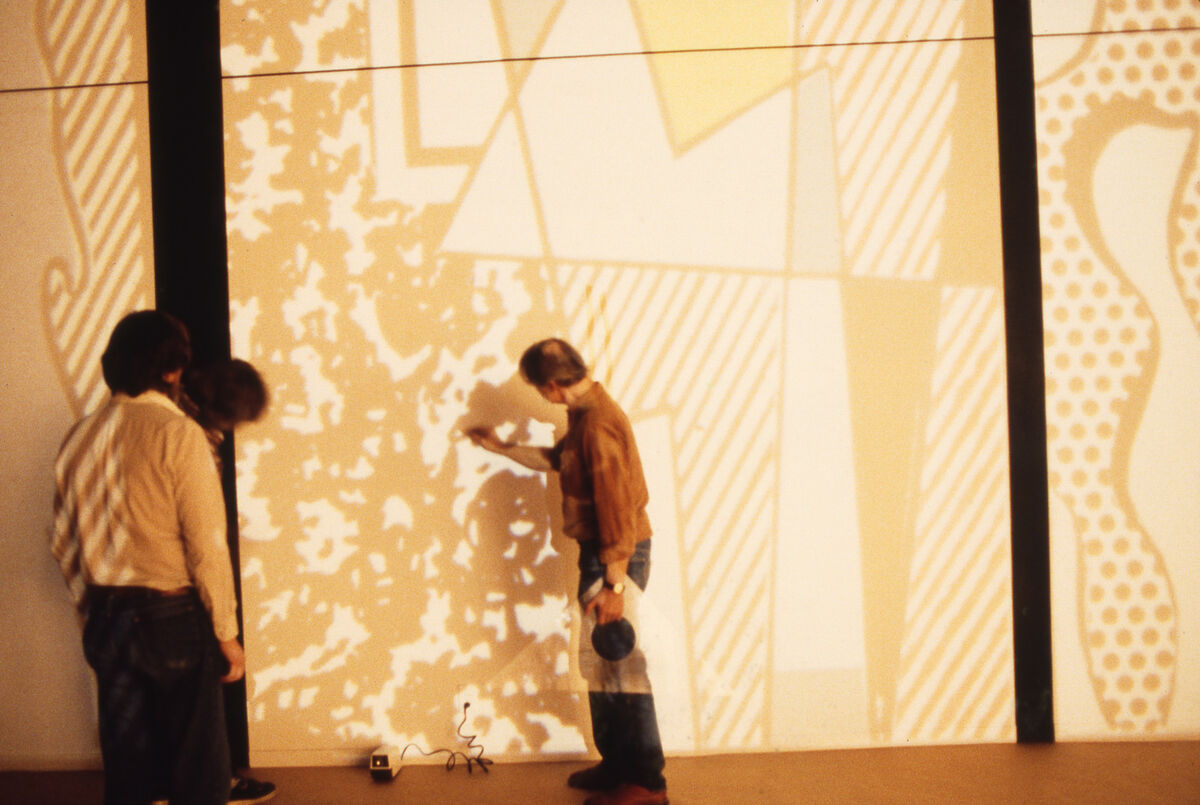 “Working for Roy was never rigorous,” McKeever replied when asked if creating the original mural was an arduous experience. “He was not deadline-driven, he just worked steadily at it. He drew it out, taped it out, we would paint in the colors,” he added. “When I started, he had already completed the final collage (he had done a couple other ones before that), and we took a photograph of that and projected it on the wall for him to draw out.”

“He obviously drew it out, because it’s his mural, but once we started painting it, you were just given a task and you did it,” McKeever said. “The dots were done with silkscreen paper so that was just like putting wallpaper up.” He recalled painting the stripes as particularly labor-intensive, as was the brushstroke, which Lichtenstein executed from a scissor lift. 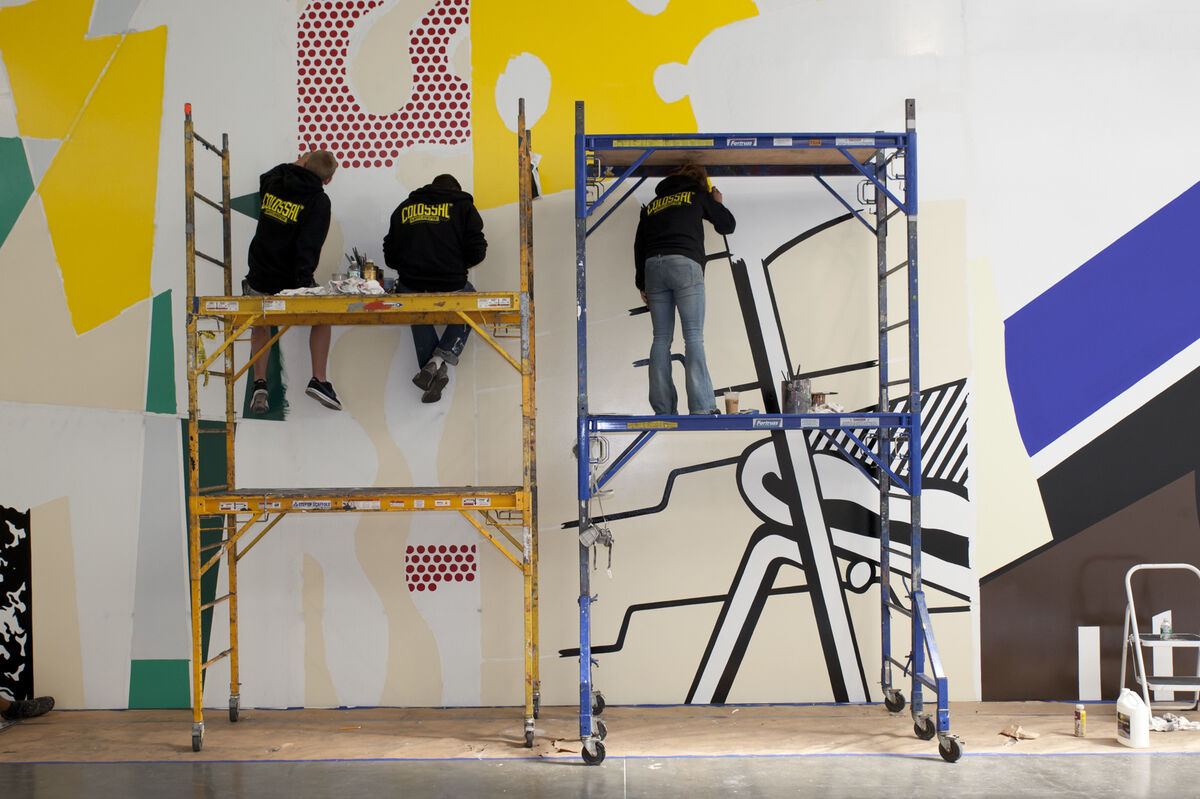 Scissor lifts and scaffolds aided a team of sign-painters in the creation of the replica. Crucial to its realization was support from the foundation and its archives (included in the show are the preparatory drawings and collages for the mural), input from the studio assistants involved in the original, and photographic documentation by Bob Adelman. McKeever, now head archivist and photographer at Gagosian, who worked with Lichtenstein until his death in 1997 and joined the gallery a year later, was integral to the process. “The main thing we had to decide on was how it was going to be painted,” he explained. “We didn’t have the original crew, and obviously Roy wasn’t going to draw it out, so we had the idea to use commercial sign painters to duplicate it from photographs.” Getting the colors right proved to be one of the biggest challenges. “The photographs are not the easiest things to interpret,” McKeever noted. “Green has a tendency to go black in photographs and there was a whole green area that was black in the photographs, so we had to go back to the collage to figure out where it was green.”

“Looking at it, the mural becomes a kind of retrospective of Roy’s iconic imagery,” Grzan explained. “It references his imagery from the ’60s, ’70s, the body of work he was working on simultaneously in the ’80s, and it became this playful way for Roy to kind of work through some imagery that would come in later series.” No stranger to Lichtenstein, Grzan has organized multiple exhibitions of the artist’s work, including the 2002 Mitchell-Innes & Nash show that celebrated the unveiling of Lichtenstein’s Times Square Mural (1994) at the 42nd street and Broadway subway station. “We wanted to keep everything in the spirit of what Roy had intended for the mural,” she said regarding the mural’s ultimate demise. “It was never meant to be a commercial piece, it was meant to be kind of a gift, as Roy has been quoted saying, and it was really important to keep with the integrity of that.” 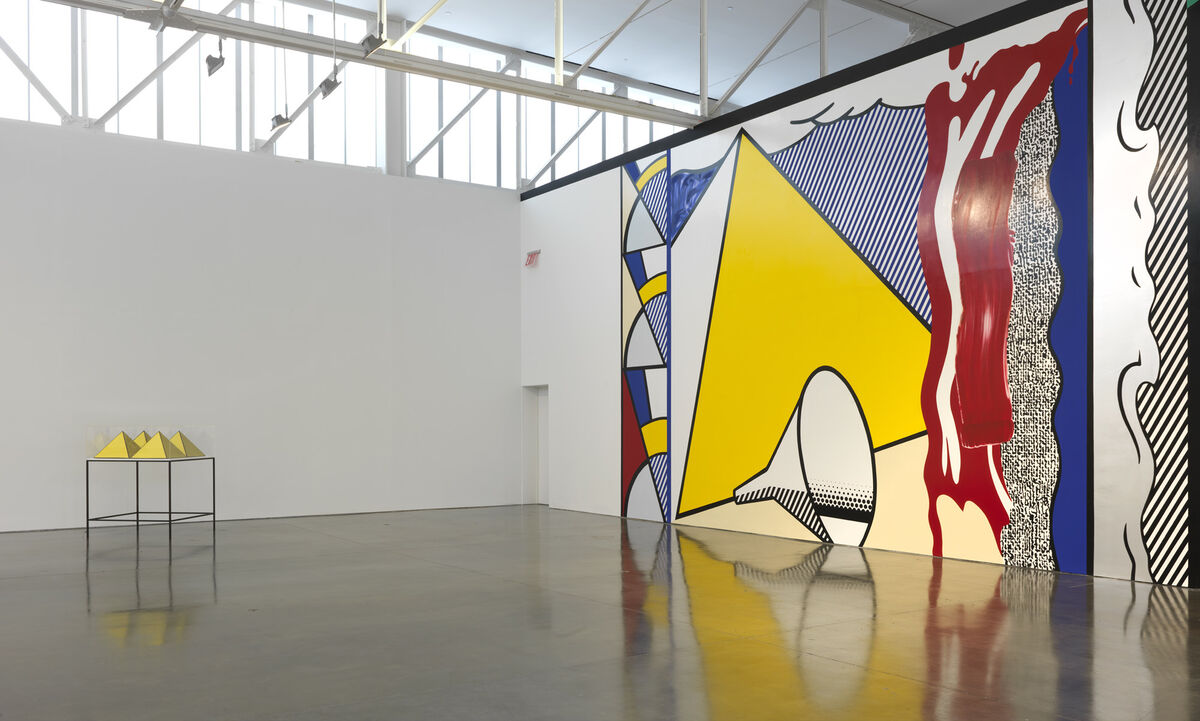 A drippy red brushstroke, a marbled composition book, a slice of swiss cheese, nods to
Brancusi
and
Picasso
, a smattering of Ben-Day dots—the work is indeed a compilation of the images that have become synonymous with the artist’s oeuvre. This, combined with its staggering size, makes the viewing experience a revelatory, affecting encounter—which is the point. “It’s such an important piece of Roy’s that wasn’t widely documented at the time,” Grzan explained. “People don’t really know the imagery well, so it was important to expose it to a new generation of viewers.”

The original Greene Street Mural was painted over after six weeks, and subsequently demolished. The replica will meet the same fate. Timing is of the essence here—from the show’s origins, many years in the making, to its revivalist concept, to its temporality. You have just one week left to see the mural in its second life, so make haste.
Casey Lesser is Artsy’s Lead Editor, Contemporary Art and Creativity.
“Roy Lichtenstein: The Greene Street Mural” is on view at Gagosian Gallery, New York, Sept. 10–Oct. 17, 2015.
Follow Gagosian Gallery on Artsy.
Related Stories