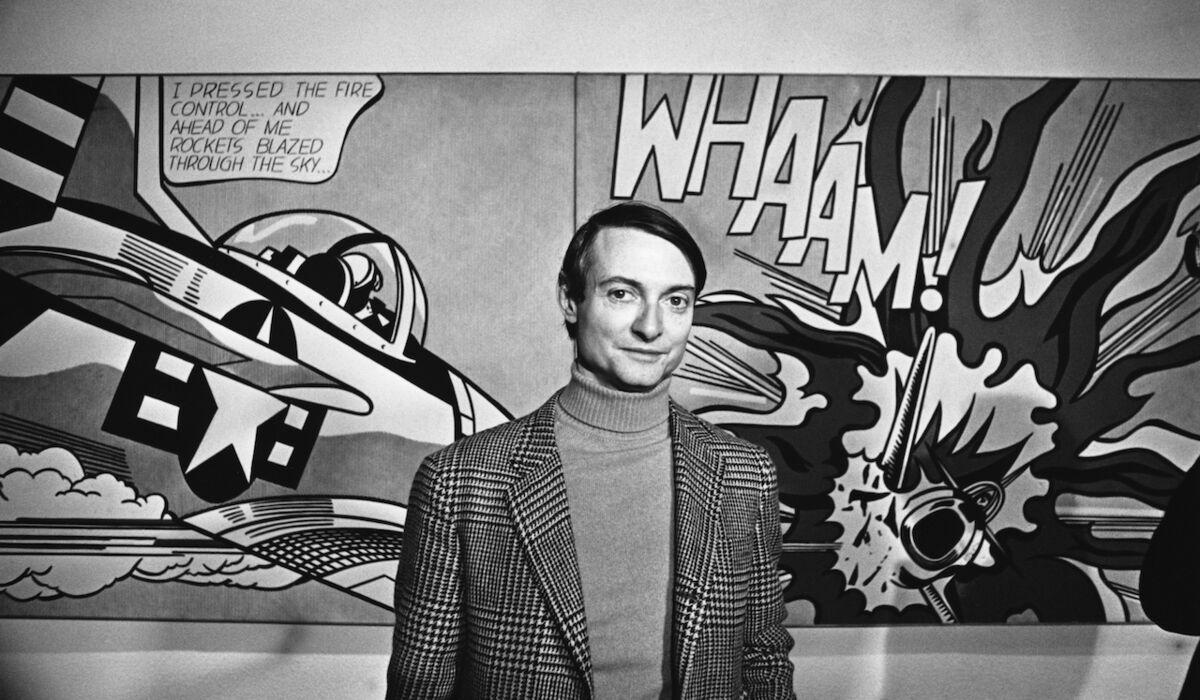 Portrait of Roy Lichtenstein in front of his painting Whaam! during an exhibition of his work at the Tate Gallery, London. Photo by © Hulton-Deutsch Collection/CORBIS/Corbis. Image via Getty Images.

In 1964, Dorothy Seiberling asked Life magazine readers a provocative question: Is
Roy Lichtenstein
the worst artist in America? With countless solo shows and retrospectives to his name, along with works hanging in museums around the world and in the homes of storied art collectors, this question may be perplexing to a contemporary audience. The art world’s reception of his work in the early 1960s and the public’s reaction to
Pop art
, however, weren’t unanimously welcoming. Although Seiberling’s profile ultimately concluded that Lichtenstein was not the worst artist in America, the question of Pop’s legacy had yet to be settled.
Just a few years earlier, Pop art burst onto the scene, providing a foil for the prominent style of the time,
Abstract Expressionism
. Ab-Ex titans like
Mark Rothko
and
Robert Motherwell
resigned from
Sidney Janis Gallery
in 1962 when Janis mounted a Pop show, with Rothko allegedly referring to the artists as “charlatans and young opportunists.”
But just like the advertisements they were looking to for inspiration, artists like Lichtenstein,
Andy Warhol
,
James Rosenquist
, and
Claes Oldenburg
soon became impossible to ignore. They propelled Pop forward in America and internationally. 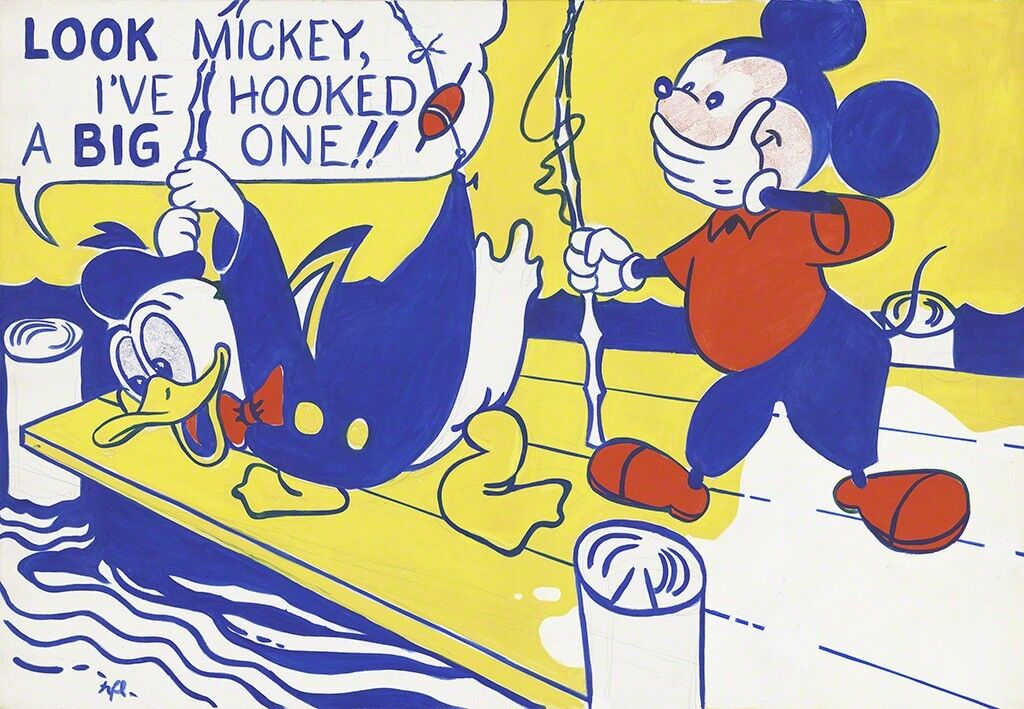 Roy Lichtenstein
Look Mickey, 1961
Walker Art Center
Legend has it that Lichtenstein painted one of the first works of American Pop art in 1961 for his son Mitchell and his friends. To create something that would resonate with the kids, he turned to two beloved cartoon characters: Mickey Mouse and Donald Duck. Lichtenstein went on to describe the work, Look Mickey, as his “first painting with no expressionism in it.” (It is now in the collection of the National Gallery of Art.)
Although the style in which Lichtenstein rendered Look Mickey—a bubbly, color-blocked cartoon—was completely distinct from the more abstract work he’d produced in the 1940s and ’50s, he had been looking to advertising and cartoons in the pre-Pop years as well. His gestural, semi-abstract drawings of Donald and Mickey show an interest in the characters before Look Mickey, and around 1952, Lichtenstein painted an earth-toned
Cubist
rendering of an advertisement for corned beef.
Barbara Bertozzi Castelli, director of Castelli Gallery and widow of the legendary art dealer Leo Castelli, noted that some of Lichtenstein’s iconic Pop colors begin to emerge in his works from this time. “We get to the late 1950s and his work becomes very abstract, and I think [the works] have something very special because you start to see different colors that Roy invented that only he can do,” Bertozzi Castelli said.
There is one particularly important stylistic difference between the pre-Pop works and Look Mickey: the absence of the brushstroke. Lichtenstein would go on to meticulously remove any visible traces of brushstrokes from his paintings, creating flat renderings of recognizable images. Lichtenstein mastered the aesthetics of reproduction to create highly unique works. Look Mickey begins this exploration of consumerism, reproduction, and media that came to define the Pop art movement. 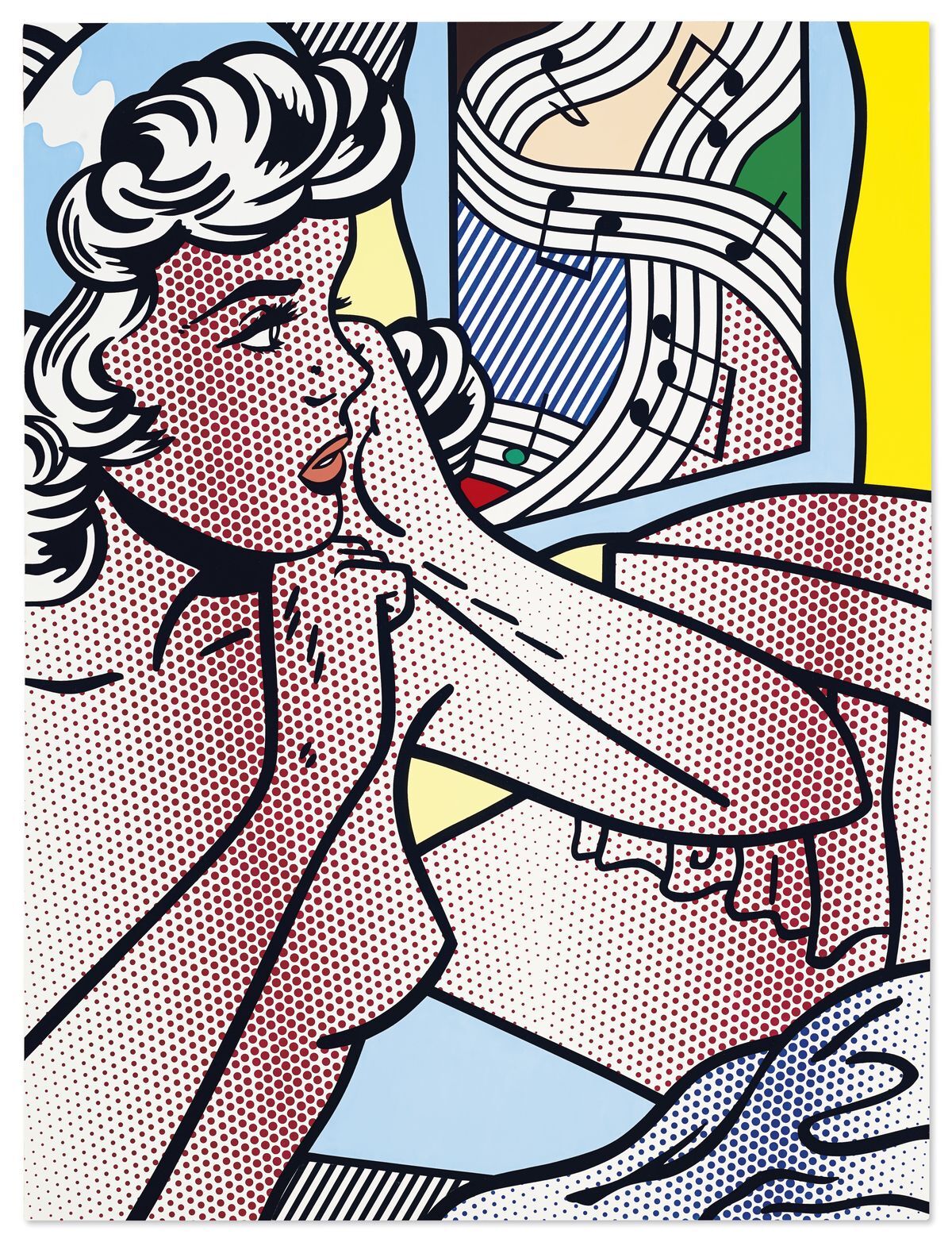 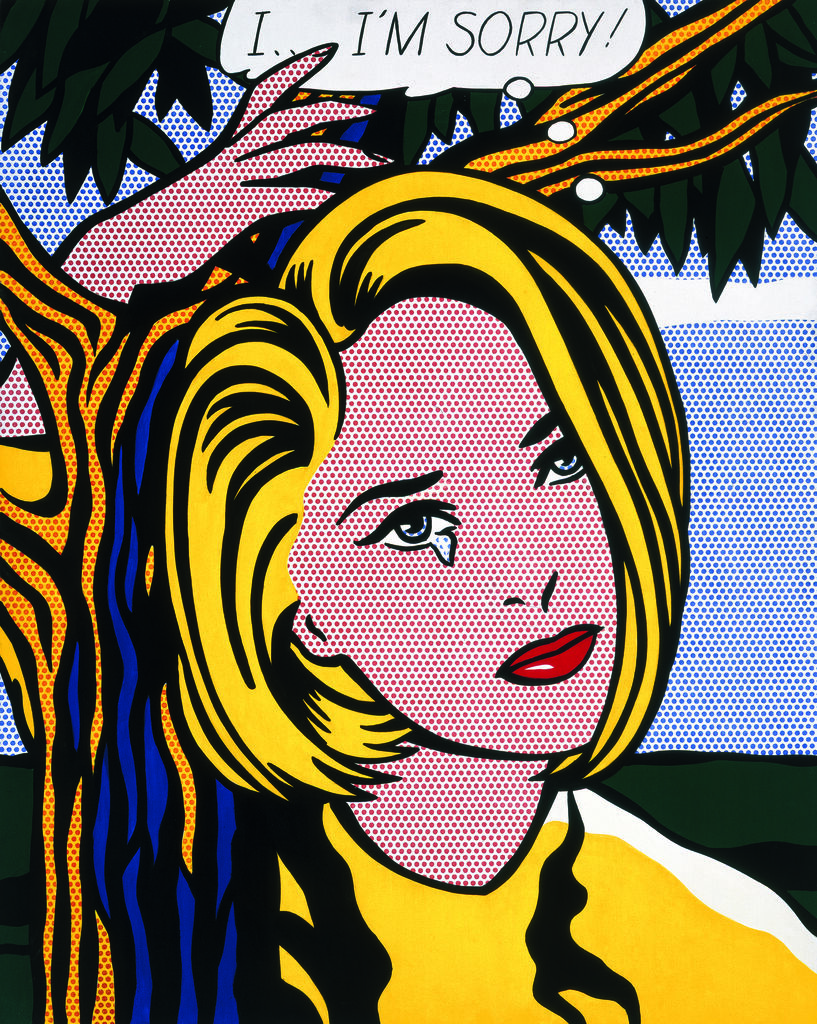 Roy Lichtenstein
I...I'm Sorry!, 1965-1966
"The Inaugural Installation" at The Broad, Los Angeles
Advertisement
In the late spring of 1961, Lichtenstein joined Castelli’s gallery after the dealer chose to work with him over Andy Warhol—at the time, both artists were using cartoons in their work and were thought to be too similar. Despite critics’ initial skepticism, Lichtenstein sold out his first solo show with Castelli before it even opened in the winter of 1962.
“I think the gallery liked this idea of discovering talents,” said Bertozzi Castelli when asked why Castelli took a chance on Lichtenstein. Castelli would go on to show work from every period of Lichtenstein’s career, always prioritizing his new work over the paintings from the 1960s that came to define his market. (The artist’s estate is represented by both Castelli Gallery and Gagosian.)
Paintings from the 1960s dominate the list of Lichtenstein’s top secondary market results. His auction record sits just below the $100-million mark: In 2015, his close-cropped painting of a nurse from a popular comic strip sold for $95.3 million at Christie’s, smashing his previous record of $56.1 million, which was set in 2013, also at Christie’s, by Woman with Flowered Hat (1963), one of his takes on
Picasso
’s Cubist portraits. 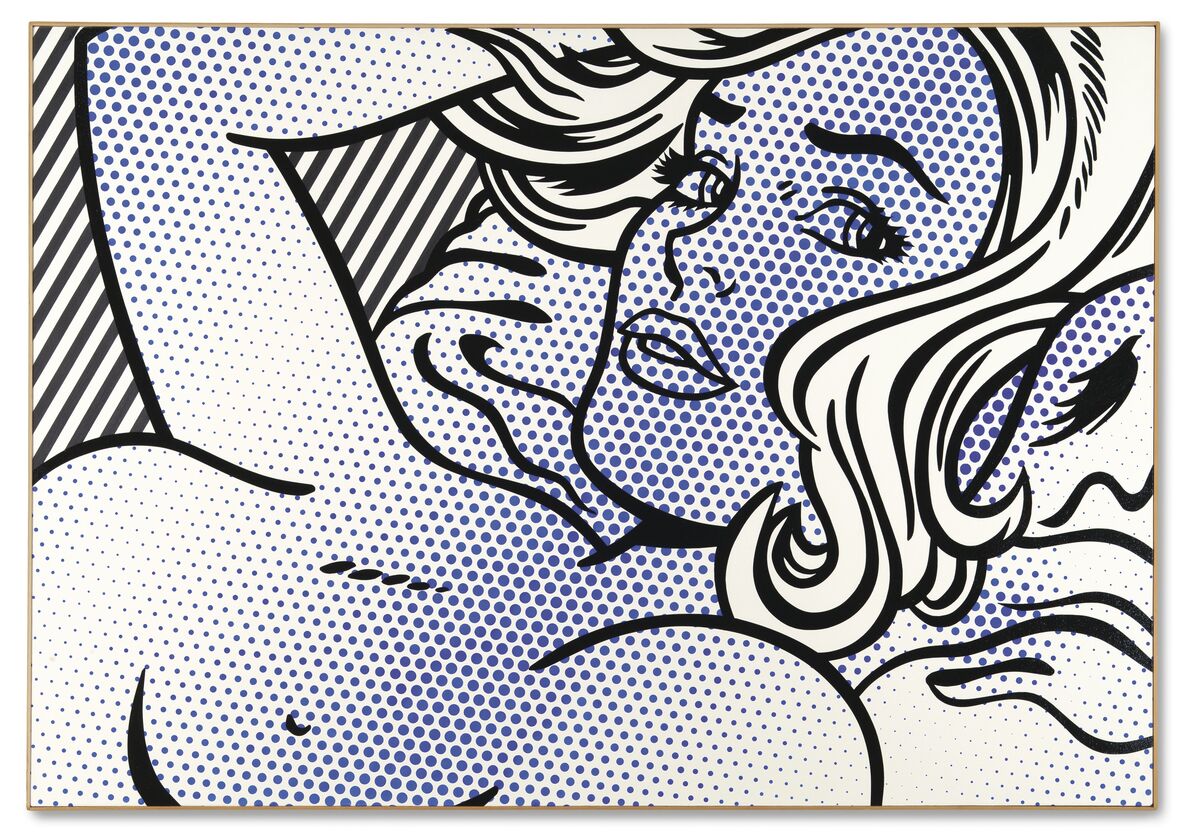 The record-setting Nurse (1964) brings together the most desirable qualities collectors look for in the Pop master’s work. “[Lichtenstein] had a very long career and he produced fabulous bodies of work, but in terms of the immediacy of recognizing what this is, the girls continue to be this iconic idea and what people identify with the most as a quintessential Lichtenstein work,” said Ana Maria Celis, senior vice president of post-war and contemporary art at Christie’s.
The 1960s are often considered the height of Lichtenstein’s career, especially when it comes to collecting, but recent sales show that new segments of his market are growing stronger. As his breakthrough Pop works are placed in major private collections and institutions—and will likely not be seen on the market for a long time, if ever—other bodies and eras of work are gaining renewed attention.
Nude with Joyous Painting (1994), which was the top lot at Christie’s global relay sale earlier this month, is one of only two works among Lichtenstein’s top 10 auction results to come from a period other than the early 1960s. The other work is also a 1990s nude, Seductive Girl (1996), which sold for $31.5 million in 2013. Much like Nude with Joyous Painting, Seductive Girl appropriates a comic girl from Lichtenstein’s early career and strips her of her clothes, playing with the art-historical trope of the female nude. Seductive Girl, however, lacks the complexity of a work like Nude with Joyous Painting (the close crop doesn’t place the heroine within an interior and the color palette is relatively pared down), which exceeded Christie’s $30-million estimate to sell for $46.2 million, making it Lichtenstein’s third-biggest auction result. 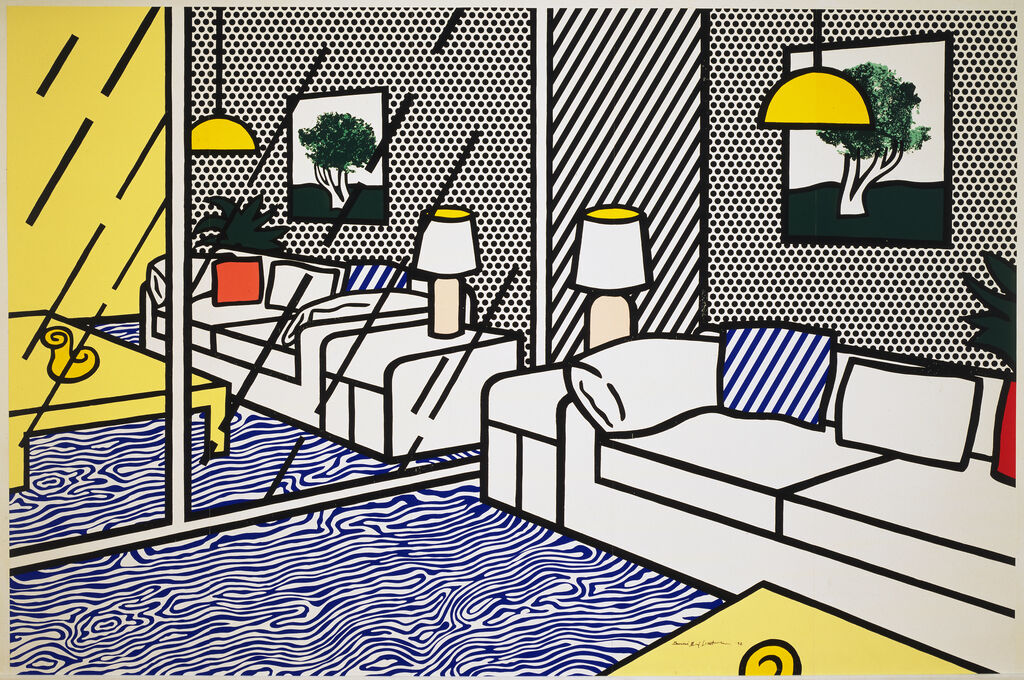 Roy Lichtenstein
Wallpaper with Blue Floor Interior, 1992
Gemini G.E.L. at Joni Moisant Weyl
Explaining the importance of Nude with Joyous Painting, Celis said, “[The year] 1994 is this great year. You don’t just have the nude but you also have a glimpse of an interior, and I think that is one of the things that makes this picture so beautiful, is the complexity of it.” A work like Nude with Joyous Painting shows both Lichtenstein’s appropriation of pop culture, with the comic girl as the focus, and also his nod to art history, which is seen throughout his career in sweeping landscapes, the fractured Picasso-like portraits, and still lifes rendered with Ben-Day dots. It is fitting that the “Nudes” provide glimpses into many of the subjects Lichtenstein explored throughout his career—they were one of the last bodies of work he produced before his death in 1997, at age 73.
With the record price for a comic work nearing $100 million, Celis described the later “Nudes” as the “next best thing” for buyers who might be priced out from the 1960s works. She also noted that, with their myriad art-historical references, the “Nudes” fit nicely both within collections of post-war and contemporary art, and collections more focused on art from the 19th and early 20th centuries. 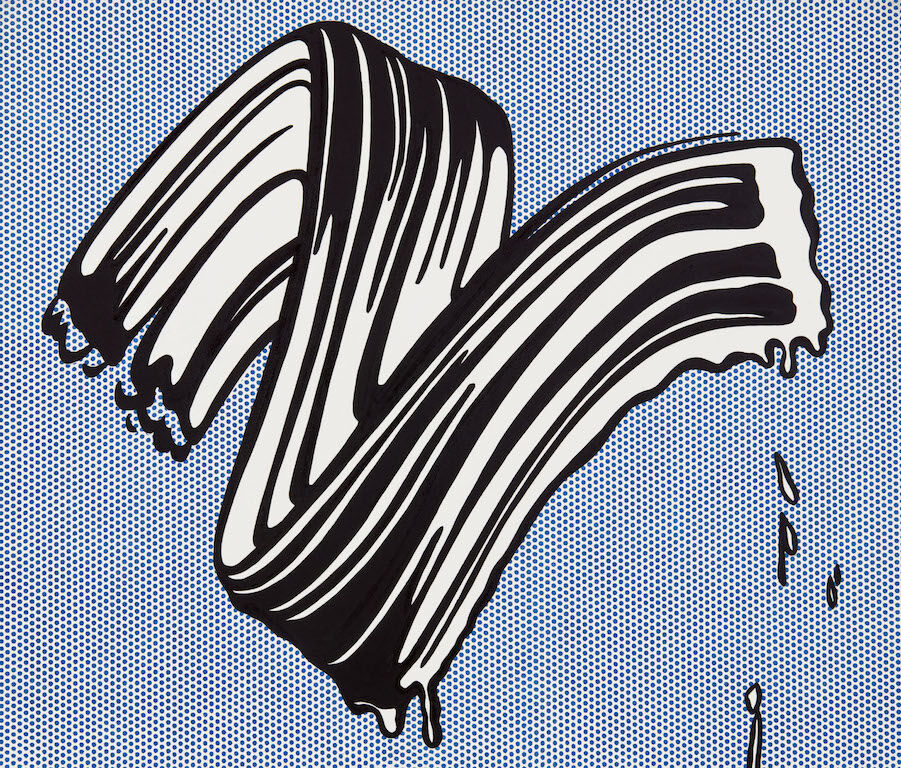 Nudes and nearly nine-digit comic paintings are not the only sectors of Lichtenstein’s market commanding attention, as another recent auction result signaled. At its marquee virtual sale last month, Sotheby’s sold his White Brushstroke I (1965) firmly within its pre-sale estimate, for $25.4 million. In this work, an undulating white brushstroke fills the canvas, with precise splatters dripping down the Ben-Day dotted blue background. Lichtenstein painstakingly painted a brushstroke without a literal brushstroke in sight.
In 1965, Abstract Expressionism was still in many ways the dominant style of art. Lichtenstein used the movement’s most iconic formal feature—the expressive, fervent, dynamic brushstroke—and sterilized it. He contained it within precise borders and positioned it on a comic book backdrop. It’s a clever work, and it provokes big questions: What is and isn’t art? How is art made? Who gets to call themselves an artist?
Unlike Lichtenstein’s comic girls from around the same time, the brushstroke works—of which there are just 15—sell at a lower price point. The result for White Brushstroke I made it his 12th biggest auction result, more than double the next most expensive brushstroke painting. Celis noted that there are works from the 1960s like the brushstrokes that have great historical value despite being too conceptual for some collectors’ tastes, especially when they’re in the market for a quintessential Lichtenstein. “The brushstroke is almost more Duchampian than Warholian,” she said, “not that the goal is to be Warholian.”
But for some collectors, the goal is to collect “Warholian” art, to own the works that have come to represent a movement. “The auction market always liked the side of Roy which is very flashy and sensual,” said Bertozzi Castelli, “and I think Roy always kind of knew that.” The crying-a-single-tear comic girls of the early 1960s are flashy and sensual, but they also mark the beginning of an artistic revolution.
In his work, Lichtenstein was always appropriating the iconic: iconic images and iconic art movements. Lichtenstein’s girls, Warhol’s soup cans, Oldenburg’s larger-than-life sculptures—these are the icons of Pop art, and that’s what fuels their markets. As Lichtenstein told Seiberling in the 1964 Life profile: “I take a cliché and try to organize its forms to make it monumental.”
Sarah Dotson is Artsy’s Managing Editor.
Correction: A previous version of this article stated Gagosian represents Roy Lichtenstein’s estate; Castelli Gallery does as well. The text has been updated to reflect this change.
Related Stories