Ryan Gander Makes Conceptual Art We Can All Understand 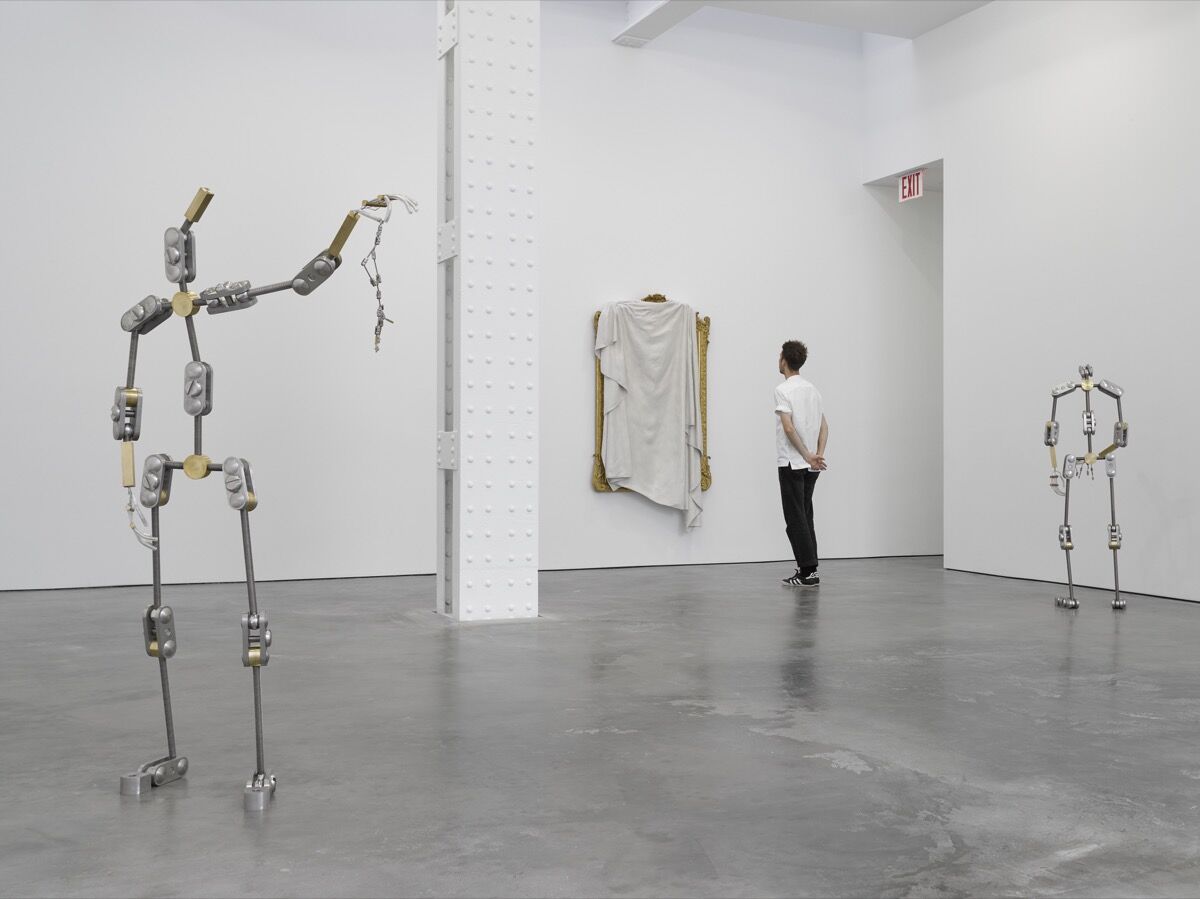 Earlier this month,
Ryan Gander
took up the challenge of cleaning his studio—not a particularly easy task for an artist who is also an obsessive collector (some might say hoarder). “When you’ve got more than three of something, there’s an impulse to get another, and another. I find myself with three spinning tops, and then suddenly, I have 800 spinning tops from around the world,” he laughs, sheepishly. During the deep clean, he also uncovered 200 business cards of Artforum publisher and man-about-town Knight Landesman. “He sends them clipped onto every issue, and signs them ‘Best, Knight.’ But what’s really interesting about them is they’re printed—it looks like it’s personal, but it’s not. His signature is exactly the same in every one! Isn’t that good? Clever guy.”
Gander is sitting in the back room of Lisson Gallery, where he’s just opened his first New York solo show in almost 10 years. Cheekily titled “I see straight through you,” it corrals collections of peculiar objects, everyday observations, and a rich range of emotions—all of which tell stories about the absurdities of the human condition. “See for me, it’s more about collecting the stories than the objects,” Gander explains, as he flips through a freshly minted catalogue, printed to coincide with the exhibition.
The book is open to page 283, which features an odd assemblage of items: a can of Ambrosia rice pudding encircled by a spoon and a can opener on a string. “This goes way back to when I was five years old,” Gander explains. “There was a hobo who lived behind the supermarket who everyone called Ambrose, which is a take on the trade name of the rice pudding that he lived off of. He had this necklace strung with a can opener and a spoon, and everyone who came out of the grocery would give him a tin,” he recalls, telling the tale with the cadence of fireside storyteller, lacing sincerity with drama. “But the thing is, I’m not sure if he existed.” Years later, Gander mentioned Ambrose to his father, who responded by telling his son that he’d imagined the whole story. “But, in any case, I think you should never let the truth get in the way of a good story,” he explains.

The assemblage, titled Ambrose’s Necklace, makes an appearance in Gander’s show as part of a multipart work (one that could become his magnum opus, in this writer’s opinion) titled Fieldwork (2015–ongoing). The piece brings together selections from Gander’s collection of sentimental, commonplace, and downright bizarre objects—66 in sum—and presents them on a moving conveyor belt. It’s a motley mix of objects: his daughter’s sketchbook, a collection of mints from across the globe, and a luxury dildo, among many other things (Landesman’s cards did not make the cut). But they share in common the ability to both contain Gander’s stories and inspire new ones.
“I have my own story, which is my reason for making it,” Gander explains. “But hopefully you’d read it differently. That would be the point—that the work is ambiguous enough, open to interpretation enough, and brimming with meaning so that you can look at different parts of it different ways,” he continues. “If it was singular in its meaning, then it’s not actually art anymore. It can’t be interpreted.” 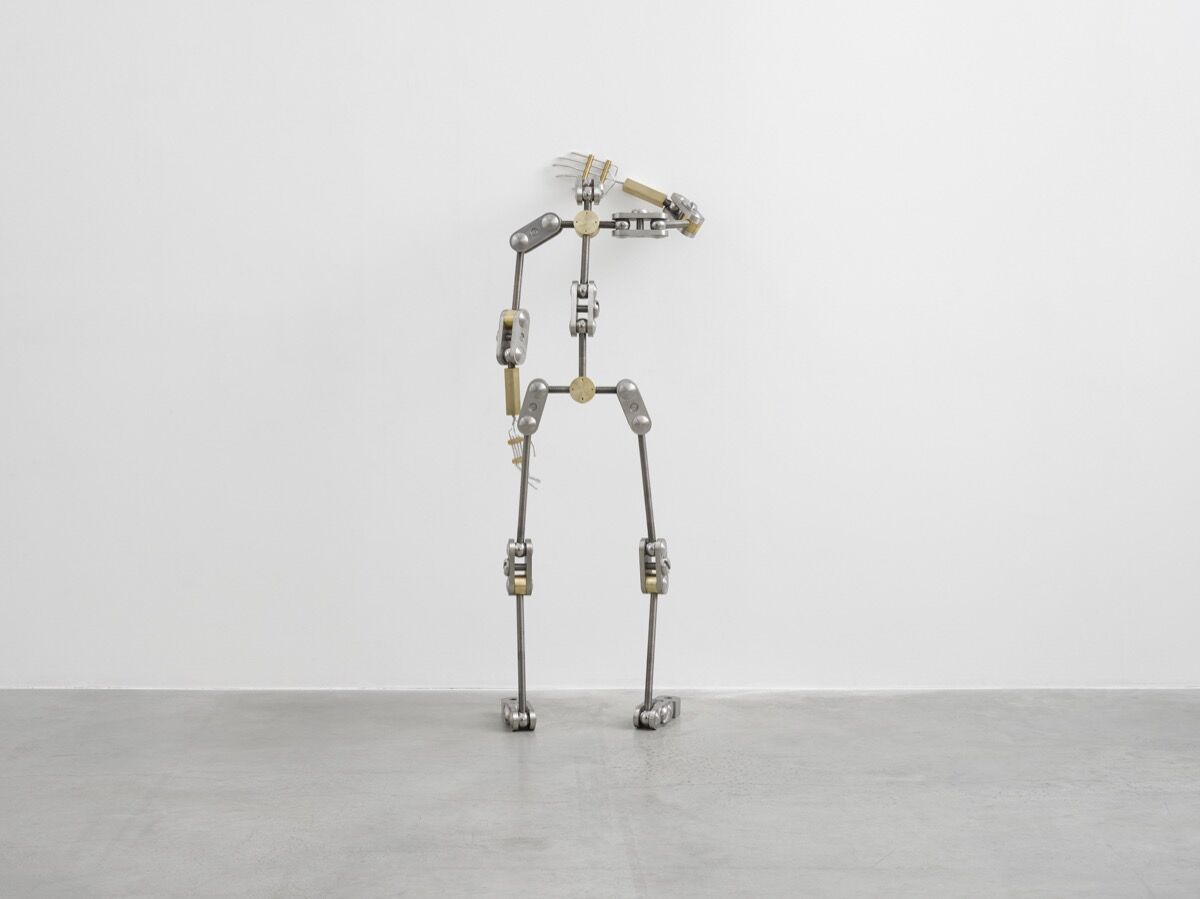 Advertisement
Scattered elsewhere throughout the show, freestanding sculptures also play host to stories—or everyday dramas, as Gander might say. These gangly steel figures, which resemble life-size art mannequins or ’70s-era droids plucked from Star Wars—make up a series titled “Dramaturgical framework for structure and stability.” “Dramaturgical is a term that was invented by the sociologist Erving Goffman for the drama of living your life,” Gander explains.
It’s an apt term to apply to the works, which give off a range of powerful emotions despite the fact they’re forged from metal bars and have no faces to speak of. One leans heavily against a wall, as if in anguish. Another holds a mini model of itself at arm’s length, as if working through some existential quandary. While these could be read as self-portraits—one is titled Mr Modern Classical Conceptualist, perhaps a self-deprecating nod to Gander’s career as a conceptual artist, a facet of artmaking that is oft misunderstood—it’s also true that almost any human has at one point leaned against a wall, probably even in public, in a moment of sorrow. “That’s dramaturgical—the idea that everyone’s life is a drama, and everyone is on display,” he explains. 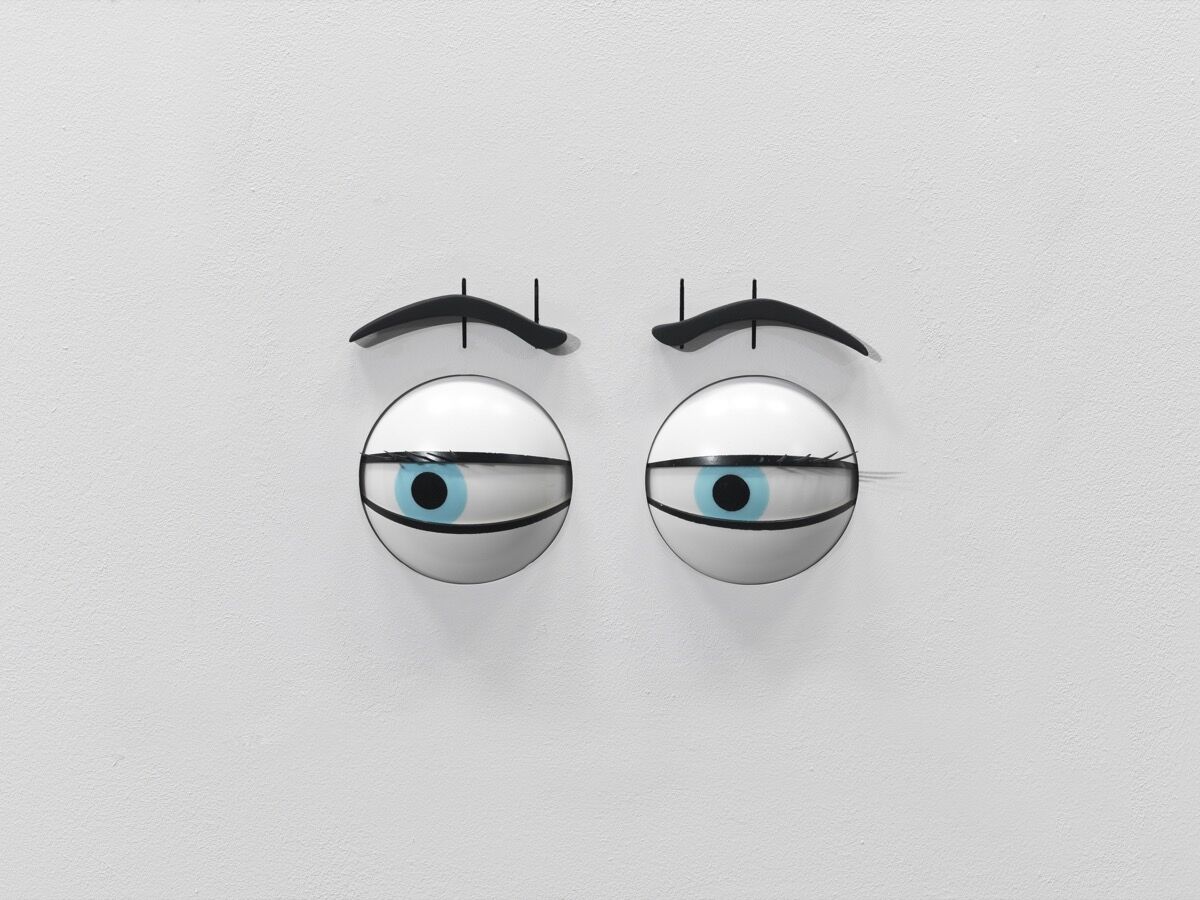 Two eyes embedded into the gallery wall drive home Gander’s point. Powered by motion sensors and advanced animatronic technology, they stare out at visitors and trail their every move. (The show’s press release reveals that they’ve been “programmed to generate every expression that can be registered through one’s eyes.”)  Given Gander’s habit of collecting objects, gestures, and the cultural idiosyncrasies that surround him, it’s not hard to imagine these eyes as Gander’s own—gazing out at the world and pocketing our conversations, our postures, our emotions, maybe even the typeface that accents our business cards, in the process.
But in the context of the rest of the show, this doesn’t read as voyeurism or a privacy-breaching act; it feels like something closer to cultural preservation. “Collecting, after all, is not too dissimilar from storytelling, fable-making, writing and recording history, and passing on information or intellectual assets from one generation to another,” he explains in his catalog. But Gander is not only collecting and telling stories, he’s encouraging us, with his sculptures that brim with meaning, to make our own. “That’s the point of a story, isn’t it? To inspire people. To give them examples of how they can think around problems or find another trajectory,” he explains. Perhaps Gander does see straight through us, but after spending time with his show, you won’t mind one bit.
Alexxa Gotthardt
Related Stories