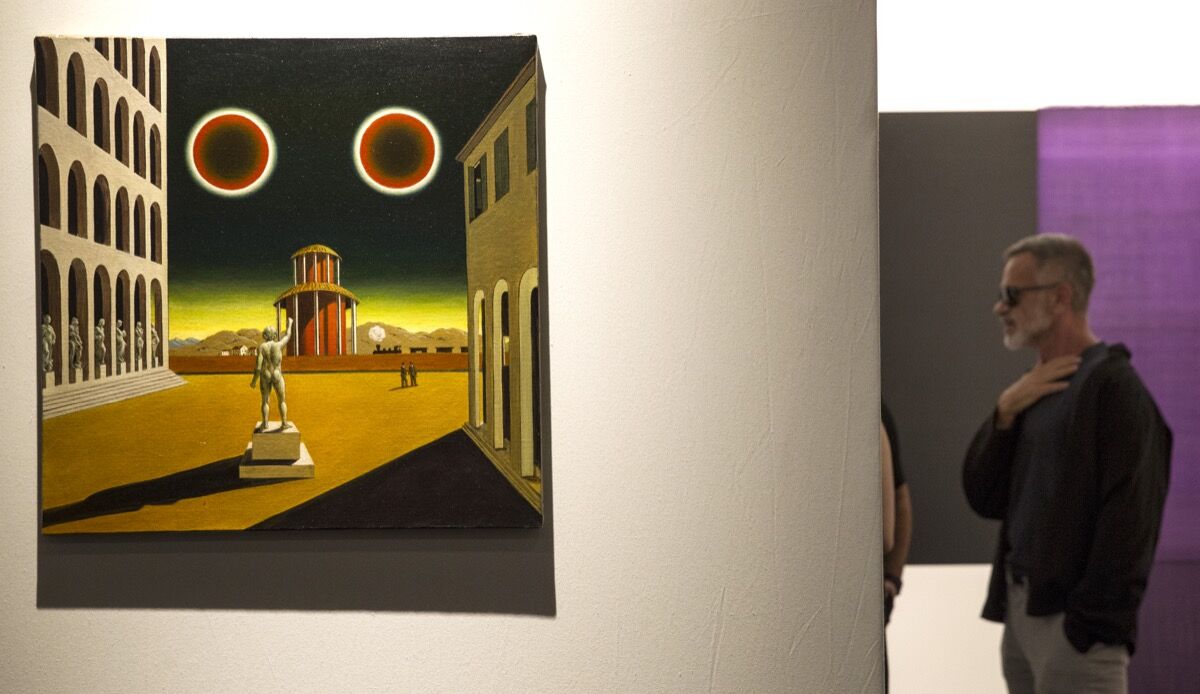 There were murmurs among the New York art community that this year’s packed calendar would strand prominent European collectors on the Continent, prompting them to sit out the spring iteration of TEFAF New York and Frieze New York in favor of the Venice Biennale, Documenta, and Skulptur Projekte Münster. But judging from the results on TEFAF’s preview day, whoever stayed home wasn’t missed.
In fact, TEFAF’s second New York edition, following a first outing this past October, still had its European vibe: Conversation flowed in French, German, and Spanish; clipped British accents were overheard; and an abundance of gourmet food, champagne, and fresh flowers channeled March’s annual festivities in Maastricht. (One hungry collector described the crudité bar as “my favorite booth by far.”)
Dealers cited the confluence of Frieze and TEFAF, and the special programming around both, as good enough reason for Europeans (and others) to jump on a plane. Heike Grossmann of Galerie Thomas in Munich said she advised one serious collector, who asked her when to plan a New York trip, to choose this week as opposed to say, March for The Armory Show. The quantity and quality of programming and exhibitions around New York make it worthwhile, she said.
“I said, if you really want to see art besides the museums, I would suggest going to TEFAF and Frieze and all the side events,” she said.
Galerie Thomas brought several pieces by
Alexej von Jawlensky
, who is also having a show at New York’s Neue Galerie, which were priced up to a few million dollars. 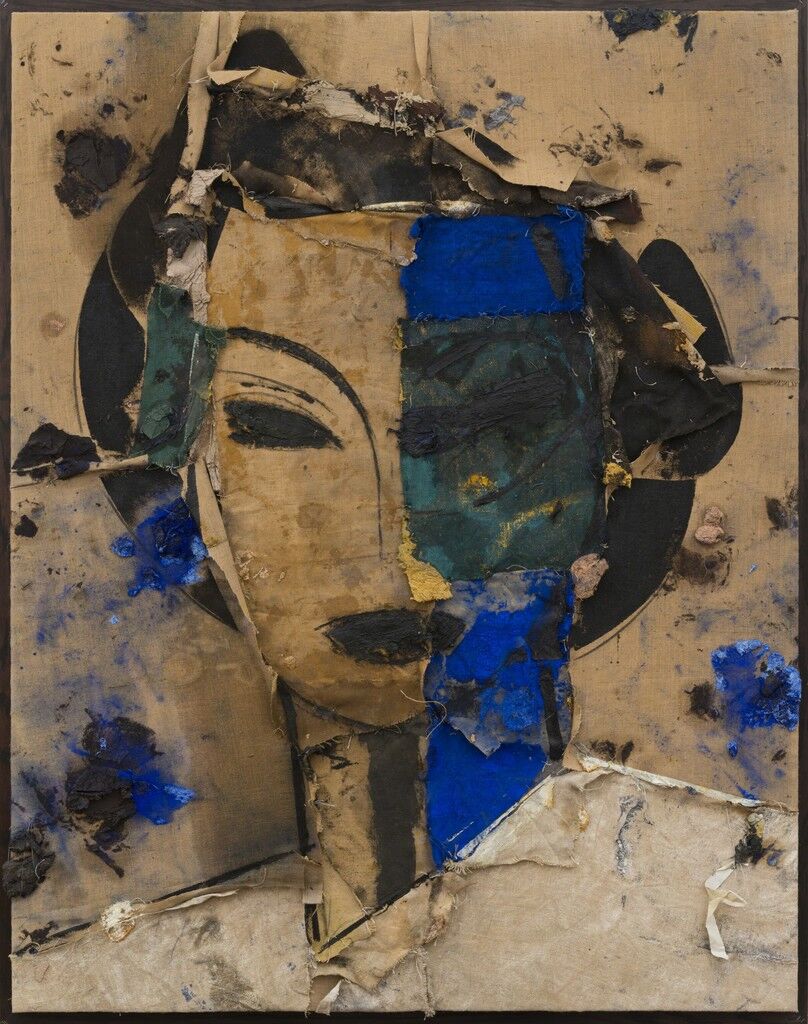 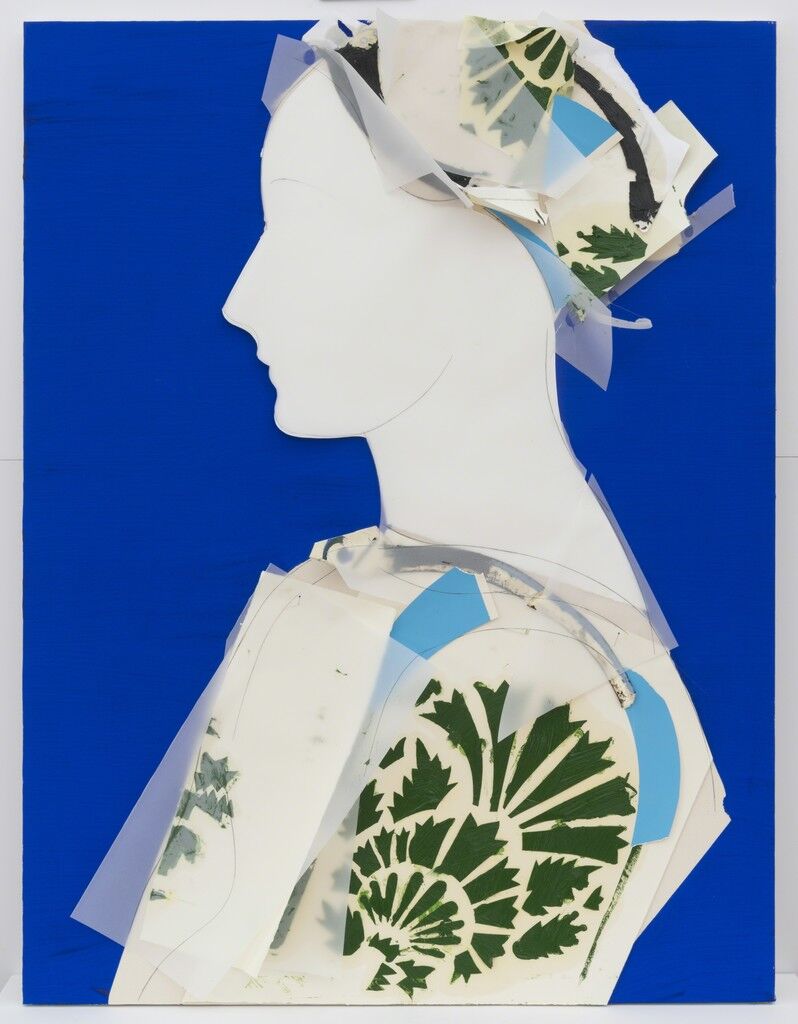 Manolo Valdés
Perfil sobre fondo azul, 2016-2017
Beck & Eggeling
Michael Beck of Düsseldorf and Vienna’s Beck & Eggeling said he had eight German collectors flying in for an artist dinner with
Manolo Valdés
, the subject of the gallery’s solo presentation, at Daniel, one of New York’s poshest restaurants.
“I always say to my clients: When you have the chance to spend an evening with an artist like Manolo Valdés or
Anselm Kiefer
—we had a dinner last night with Anselm Kiefer—that’s so enriching,” he said, joking that he himself would fly over to the U.S. for dinner at Daniel with Valdés at the table.
Many prominent New Yorkers showed up too, of course. The fashion set—designers Marc Jacobs and Valentino, and fashion entrepreneur Lauren Santo Domingo—stopped by Galerie Gmurzynska’s futuristic booth designed by Alexandre de Betak, known for his theatrical fashion show sets for the likes of Christian Dior and Céline.
The booth featured masterworks by some of the gallery’s blue-chip stable, including two pieces by
Christo
, and a large painting by the surrealist
Roberto Matta
, whose estate the gallery recently began representing. The work sold within TEFAF’s first few hours for roughly $1 million. 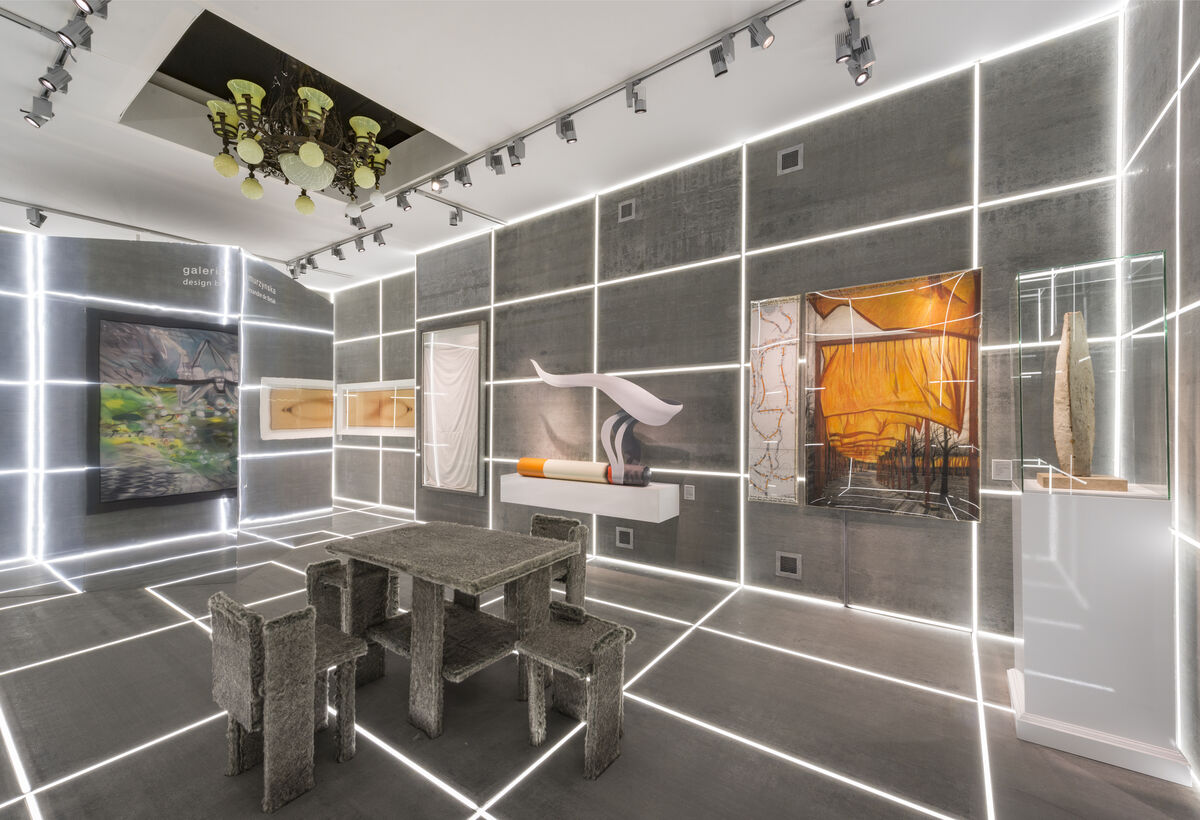 Advertisement
TEFAF New York’s Upper East Side location, on Park Avenue and 67th Street, makes it a convenient pit stop for locals such as former New York City Mayor Michael Bloomberg, who passed through David Zwirner’s booth, a prime spot near the entrance with works by
Anni Albers
,
Josef Albers
, and
Ruth Asawa
.
“This is very much an Upper East Side, uptown fair,” said Julia Joern, partner at David Zwirner. The gallery had a shared location on East 69th Street from 2000 to 2009 and is opening another space this fall just next door to its former locale. “It’s great to get back here, and we like it for our collectors,” she added.
Two wire sculptures, Untitled (S.531, Hanging Six Lobed, Two Continuous Interlocking Forms) (c. 1950) and Untitled (S.175, Hanging Single-Lobed, Four-Layer Continuous Form within a Form) (c. 1992), and a work on paper, Untitled (SF.042a, Printed cork ends) (c. 1951–52), by Asawa had sold from Zwirner’s stand by Wednesday afternoon for $1.5 million, $400,000, and $100,000, respectively. The gallery also has a booth at Frieze New York this week on Randall’s Island, with works by
Carol Bove
and
William Eggleston
.
The two fairs happen almost concurrently, with Frieze’s preview day kicking off Thursday and the fair proper running through Sunday, May 7. But Joern said they draw different collector bases: Frieze is focused mostly on art made since 2000 (often plucked straight from artists’ studios), while TEFAF features a mix of antiquities, high-end design, and modern and contemporary art. 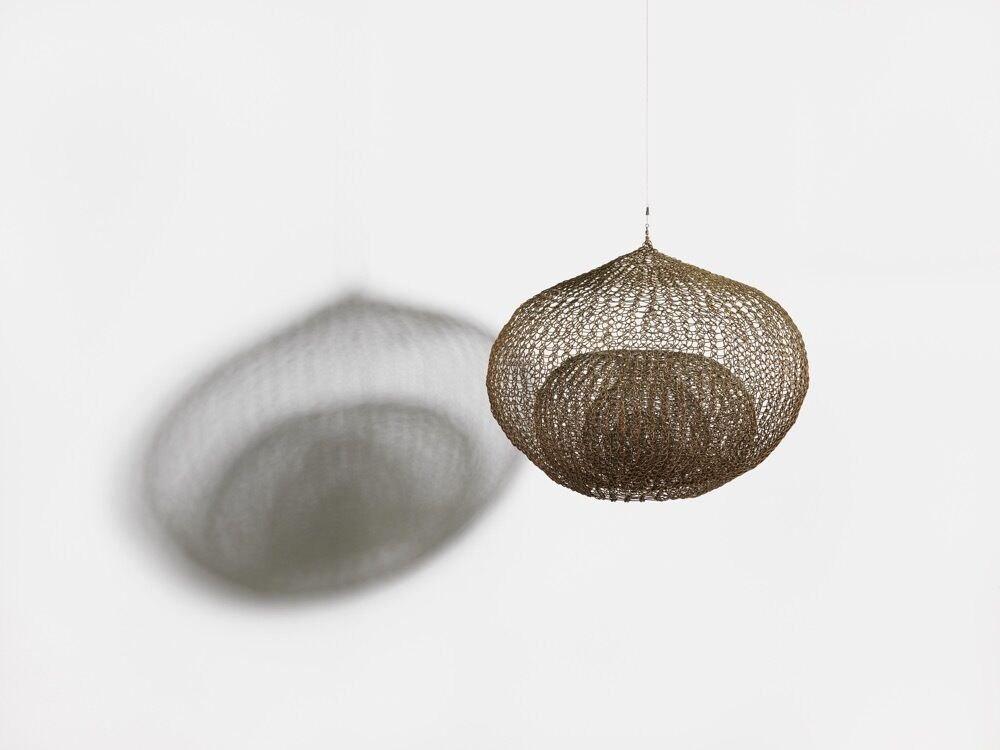 Ruth Asawa
Untitled (S.175, Hanging Single-Lobed, Four-Layer Continuous Form within a Form), ca. 1992
David Zwirner
The range of offerings at TEFAF provides an opportunity to reach new would-be collectors, said Sean Kelly, whose eponymous gallery sold a sculpture by
Kehinde Wiley
on opening day for $250,000, as well as two photographs by
Idris Khan
.
Frieze and TEFAF are “completely different fairs,” he said. “We enjoy showing alongside really high-end design and antiquities [at TEFAF]. Maastricht has such a venerable history and such a different client base that for us it’s a real opportunity.”
Kelly said he was seeing some new faces too, despite being a regular on the fair circuit.
“There’s a lot of people that I don’t see at any of the other fairs, at the Armory or ADAA or Frieze, so I’m assuming that’s the Maastricht effect,” he said.
The transit works both ways, said Moshe Bronstein, of The Merrin Gallery, a Midtown antiquities dealer. His austere blue-gray booth, just across from Beck & Eggeling’s, featured a range of treasures from Etruscan helmets priced at $28,000 to an Egyptian torso for $2 million, spiked with a black and white
Franz Kline
painting, which had sold by mid-afternoon.
Bronstein said TEFAF New York gave galleries like his exposure to contemporary and modern art collectors. The handful of antiquities dealers present were scattered around the New York fair, an arrangement that illustrates to potential buyers how easily the genres mix visually. It’s also a change from TEFAF Maastricht, which has nearly three times as many dealers, and where antiquities booths are grouped together in one section.
The sense of history pervades even galleries with a focus on modern and contemporary artists, such as Leon Tovar Gallery, whose two New York locations represent artists from Latin America. Gallery Coordinator Nathaly Berrío-Diaz said they chose to present historical works from the ’60s and ’70s from their artists, such as the Venezuelan kinetic artist
Jesús Rafael Soto
, whose three-dimensional works drew many admirers. 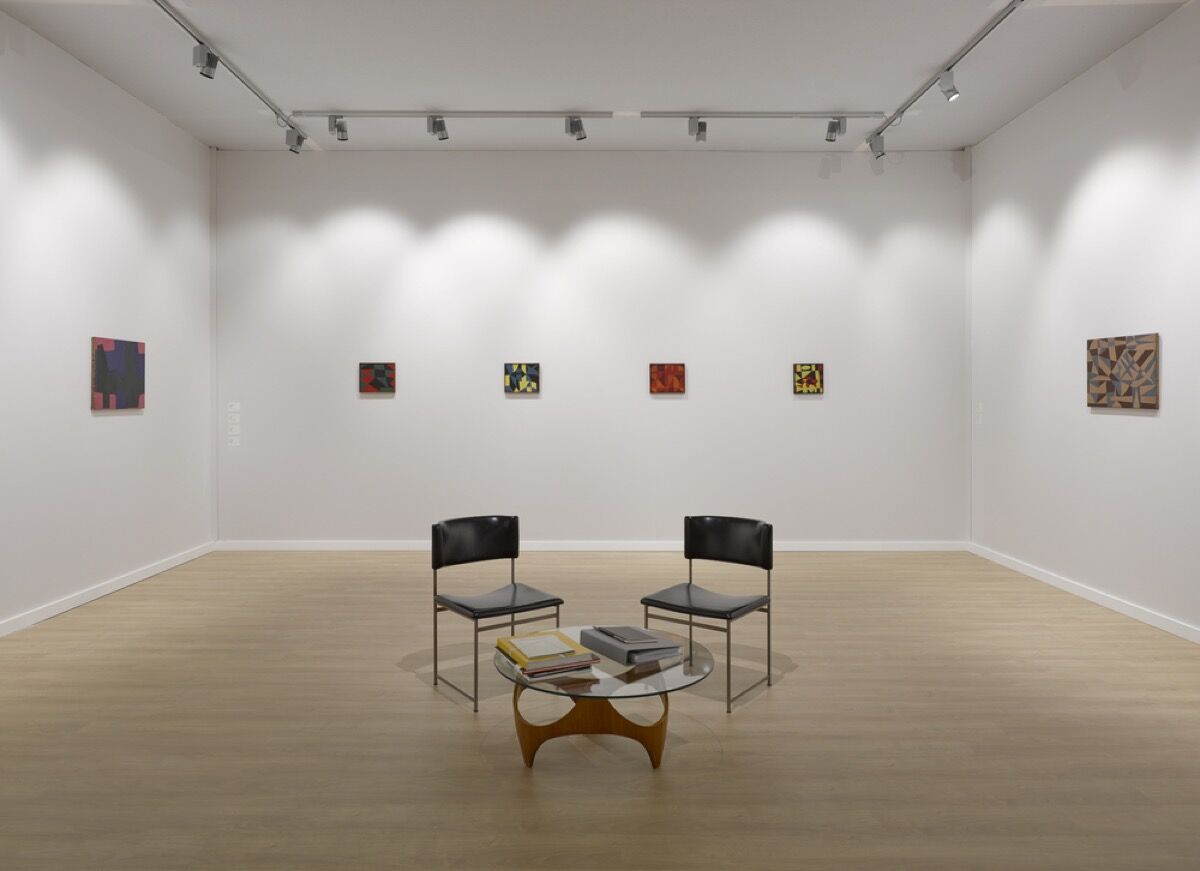 Lisson Gallery brought early work by 101-year-old
Carmen Herrera
, highly sought after following her solo retrospective at the Whitney Museum and a current exhibition at Lisson’s New York space. These small paintings were produced during her five-year sojourn in Paris, said international director Alex Logsdail, and have more shapes and forms than her later, reductive work. One sold to an institution on Wednesday.
At Paul Kasmin Gallery, a
Lee Krasner
gouache on paper, Untitled (1964), sold early for $400,000, as did a polished bronze sculpture by
Constantin Brancusi
, Le Nouveau-Né (1920), one of an edition of eight.
Eleanor Acquavella of Acquavella Galleries said the New York iteration of TEFAF gave her gallery a welcome chance to participate. Acquavella hasn’t been part of the Maastricht fair, despite the blue chip artists (
Pablo Picasso
,
Lucien Freud
) it offers, because of the nearly two week duration of the fair’s European edition. But now that TEFAF has set up shop less than a mile away from her gallery, the pull was irresistible.
“TEFAF is a really good brand across the world, and that’s really the draw for us,” said Acquavella. “There are lots of Europeans here and it’s a brand they know very well and it’s a location that’s great for New York City.”
Anna Louie Sussman
Related Stories