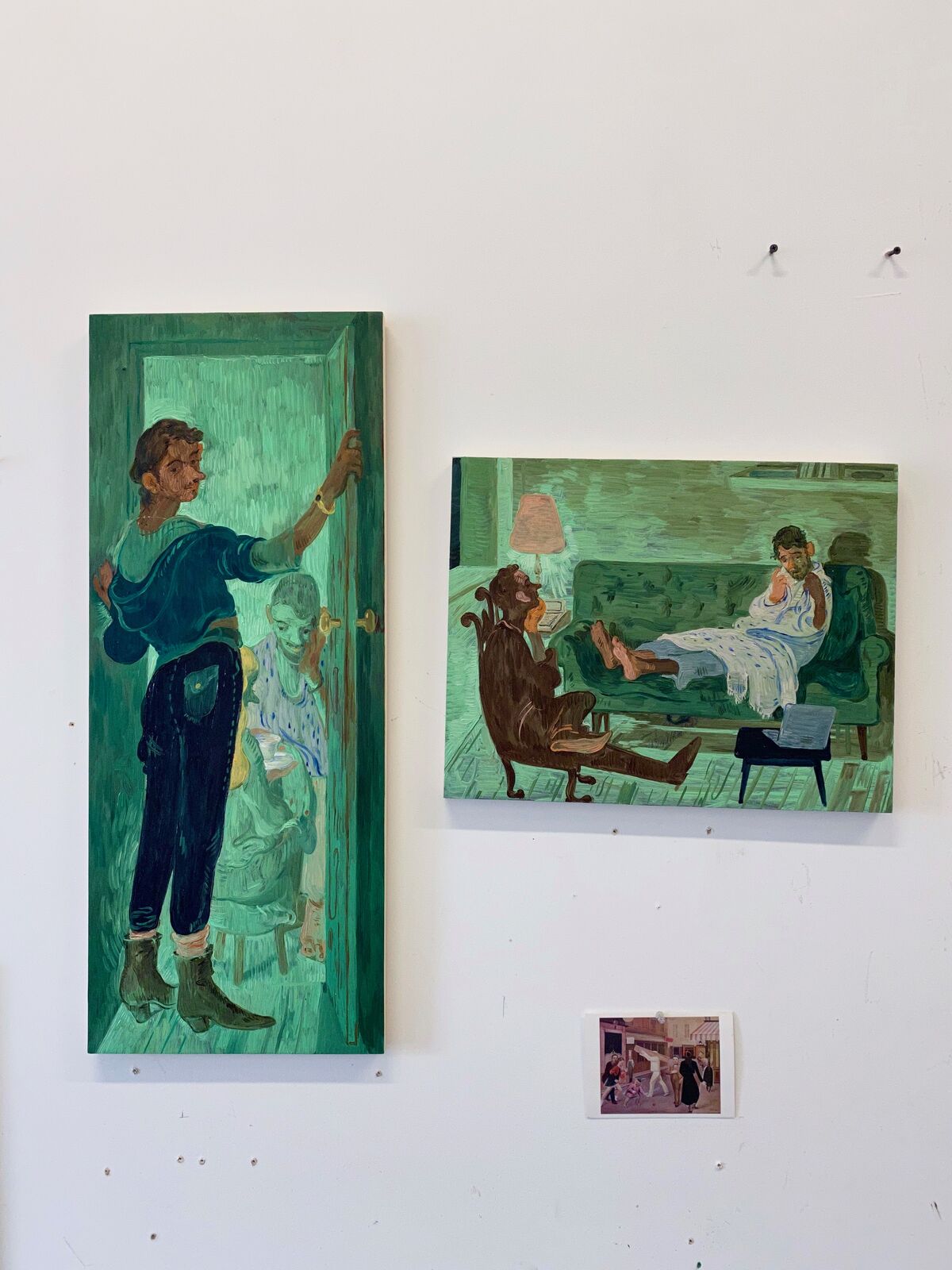 View of Salman Toor’s studio with works in progress. Courtesy of the artist. 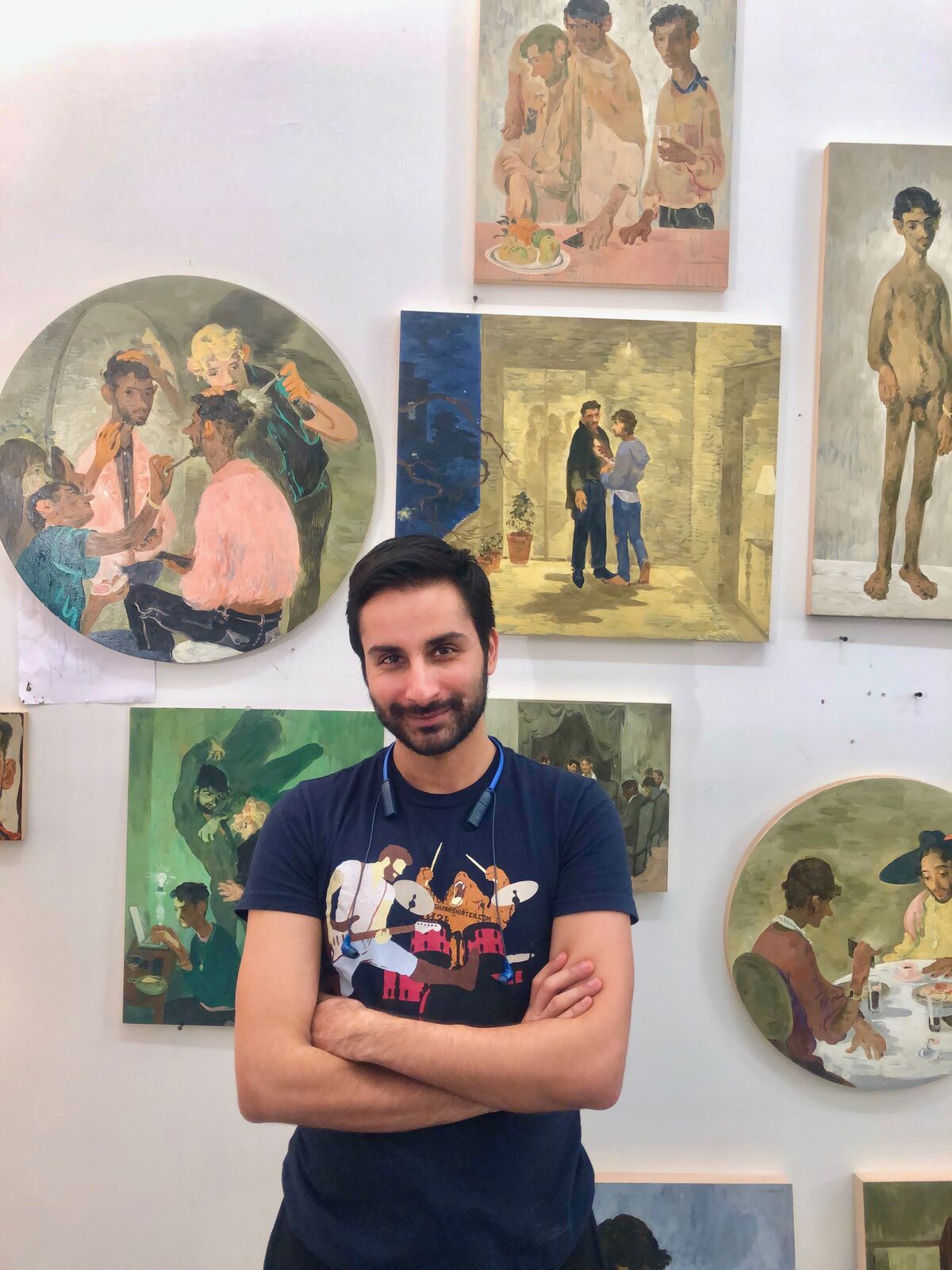 Portrait of Salman Toor. Courtesy of the artist.

Salman Toor
’s small-scale, emerald-tinged paintings of queer bohemian gatherings are particularly poignant in our socially distanced time. Remember get-togethers in friends’ cramped city apartments? Remember their indoor strings of Christmas lights, tilting stacks of books, and lamps with exposed bulbs? Or the abundance of empty wine glasses and impromptu vamping for Instagram-ready shots? Remember going to a bar where people danced under a disco ball, and the bartender had all the right ingredients to make a perfect cocktail? Toor paints these elements of comfort and communal joy with an unsentimental nostalgia that makes me yearn for the time before video-chatting became the predominant way to socialize.
Toor’s lush, intimate works were supposed to get their due this month. The Whitney Museum of American Art planned to open the artist’s first-ever institutional solo show, “How Will I Know,” on March 20th, but due to the COVID-19 pandemic, the exhibition has been indefinitely postponed. After seeing Toor’s work on view at “Xenia: Crossroads in Portrait Painting,” Marianne Boesky’s recent portraiture show in Chelsea, I was really looking forward to the presentation. Instead, I got the next-best thing: speaking with Toor via phone about fashion, South Asian representation, and art history—three of the defining elements of his oeuvre. 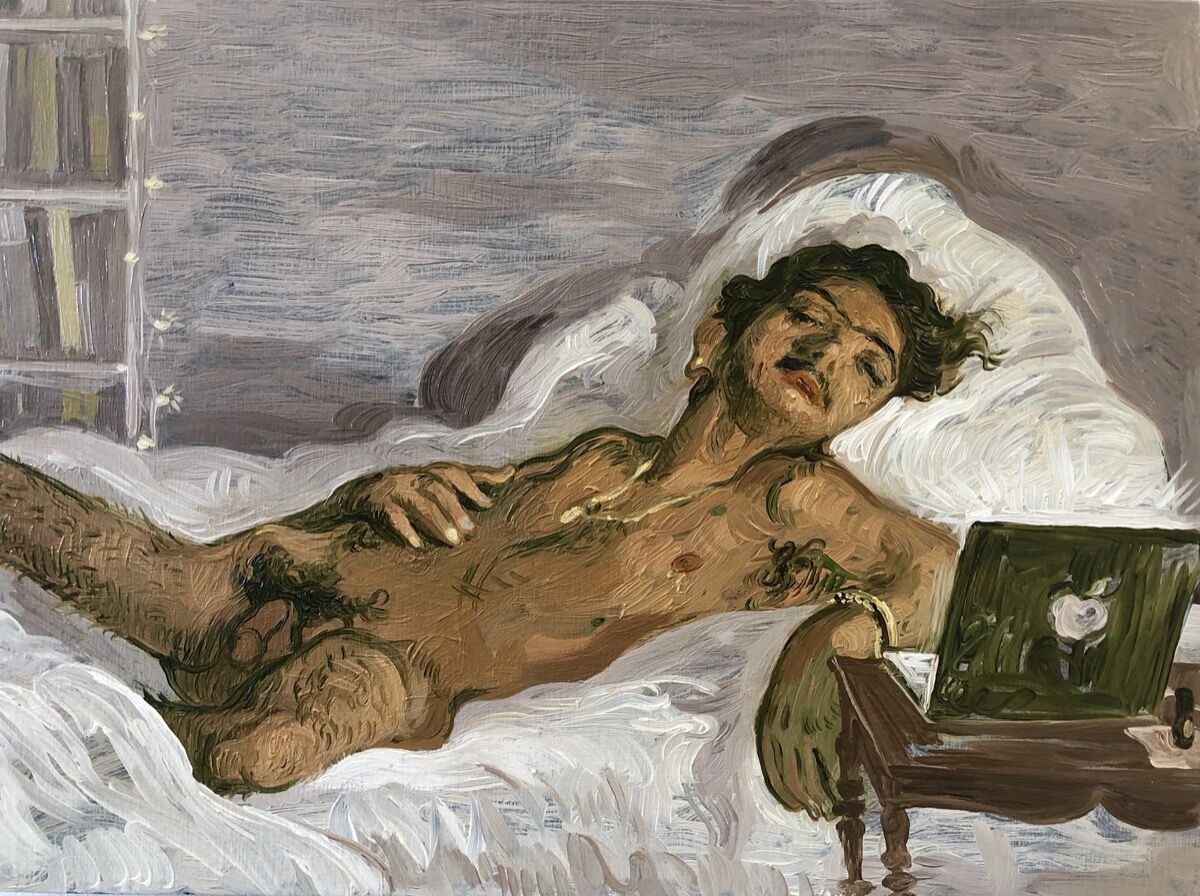 Toor was born in Lahore, Pakistan, in 1983. His community, he said, shared “pretty conservative, moral values.” He was always painting and drawing as a child, finding his friends in the art room of his macho all-boys prep school. Early on, art became a way for him to communicate.
In the early 2000s, Toor moved to the United States to attend college at Ohio Wesleyan University. He experienced major culture shock. “It was insane,” he said of his move to the Midwest. He compared his first year in the States to one of his “silent paintings,” where there’s so much going on, most of it unspoken. The canvas he referred to, Tea (2020), features a man and a woman sitting in a fenced yard, drinking tea. The starry cobalt sky glimmers above them. Toor’s far-off perspective details the potted plants on the patio steps, the white car in the driveway, and the lighted windows of the buildings beyond. Yet the central conversation remains guarded, intimate, and ambiguous in topic and tone. 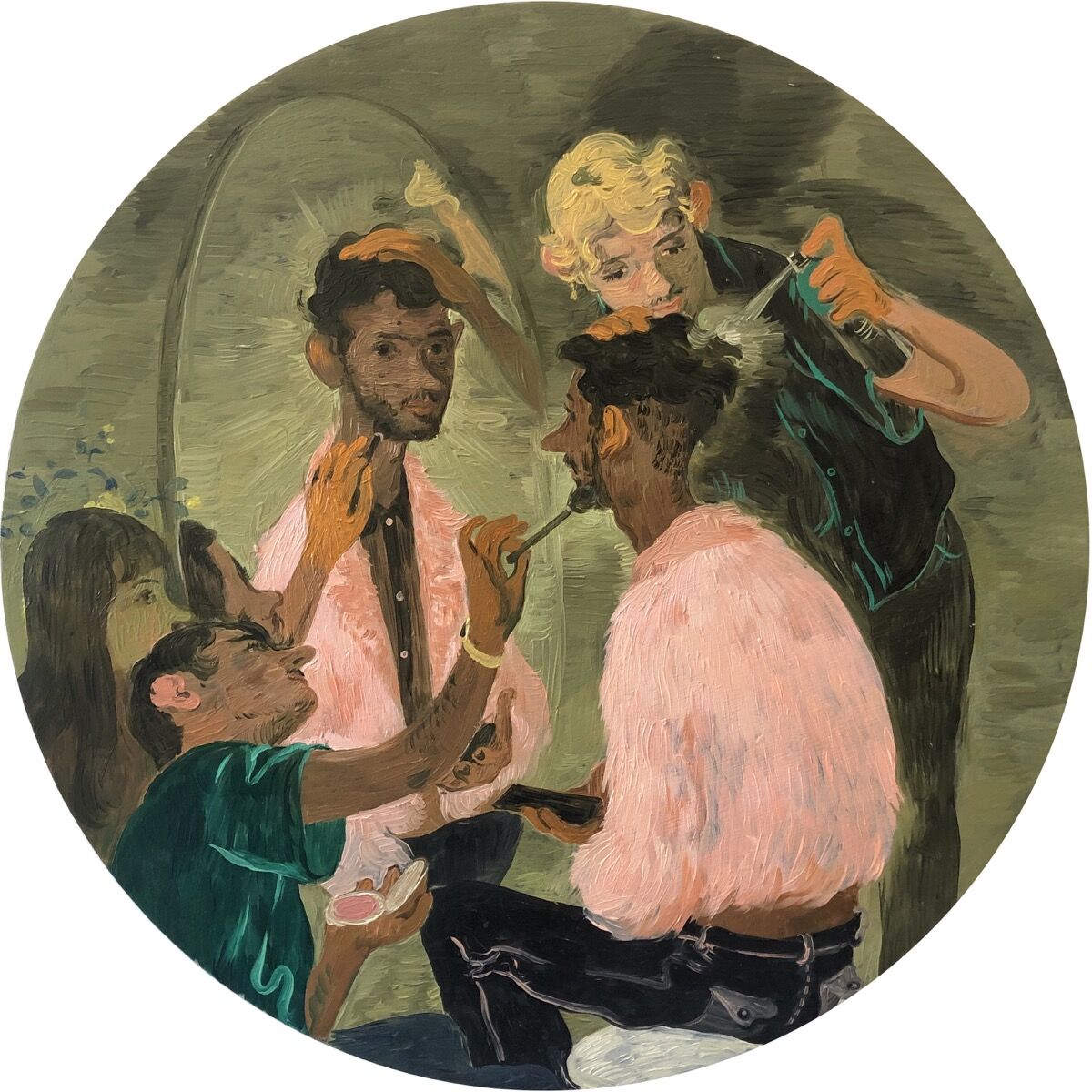 Salman Toor, The Star, 2019. Courtesy of the artist and Whitney Museum of American Art.

Advertisement
Toor initially connected with the conservative values in his adoptive city. They reminded him of home. Soon enough, however, he was seeking a more radical, creative milieu. He moved into a hippie commune for the last three years of college, then left for New York. At Brooklyn’s Pratt Institute, where he enrolled in an MFA program in 2007, Toor focused on academic painting. “You can really spend your whole life trying to be as good as those white guys,” he said. His early post-graduate paintings used 17th-century styles to represent contemporary South Asian subjects. At the time, he was painting from models and exhibiting work back in Lahore and Karachi; he was making enough money from sales to pay rent.
Yet the artist soon tired of old formulas. He stopped working from life, and instead began generating imaginary characters tinged with elements of illustration and fairy tales. He thought of wooden dolls, Pinocchio, and stories of innocent children. It excited Toor to distort his new figures, which featured a cobbled-together, patchwork essence. 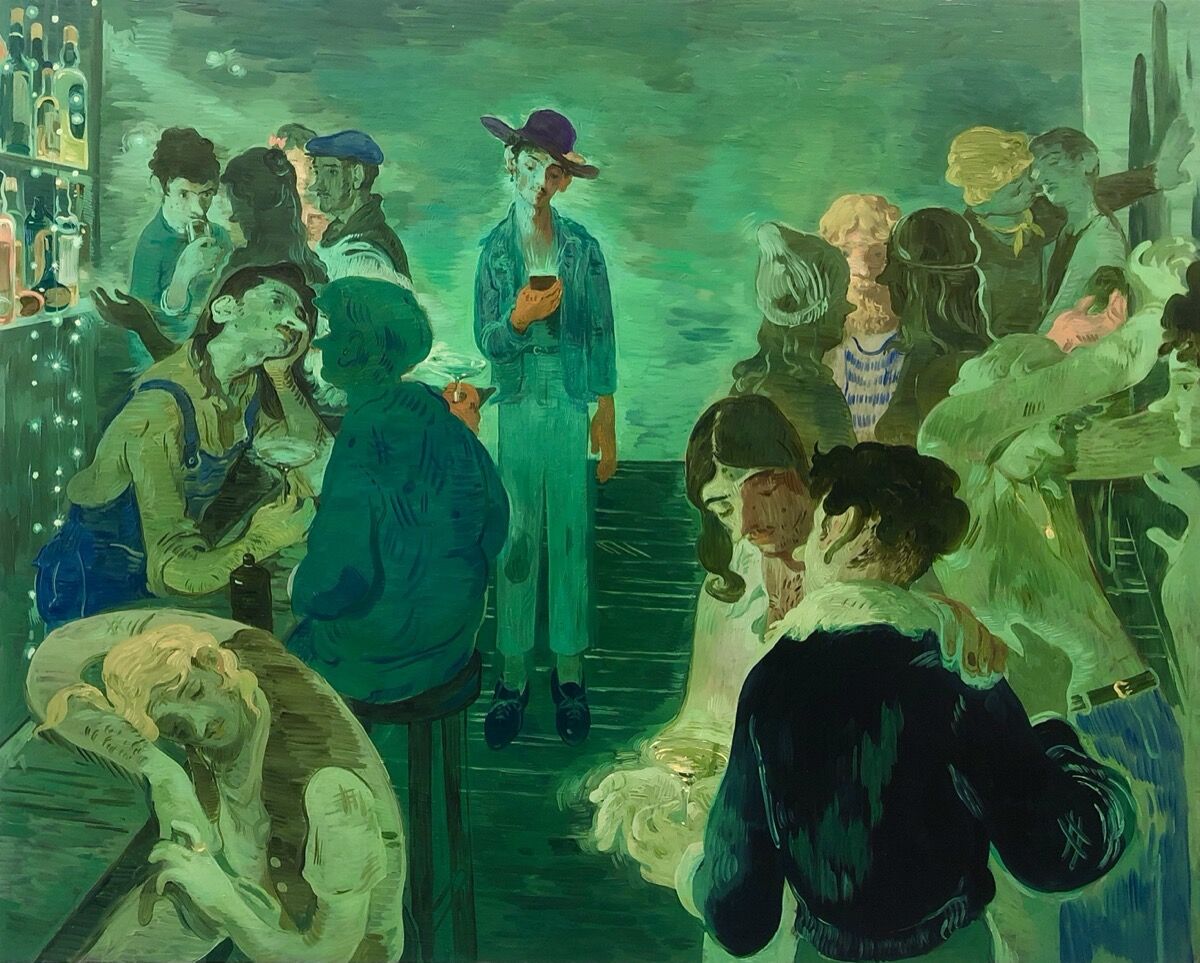 Skinny, brown, hairy men became dominant in Toor’s work—and still prevail today. “I saw myself in that figure. I see myself as an amalgam of different cultures and things I’ve grown to like,” he said. Such characters appear in Toor’s recent canvases of men stopped at customs in airports. The artist portrays these subjects standing behind gray tables laden with their personal belongings, such as shoes or a cell phone.
Toor inserts grace and ambiguity into these fraught scenes. His men are dignified, their clothing (a long brown vest, a shaggy turtleneck) deftly sketched. “Fashion is a tool of empowerment or of describing poverty or humiliation on someone foreign,” Toor said. People of color, when stopped in an airport, often don’t receive much care or positive attention. Toor provides it through his art. 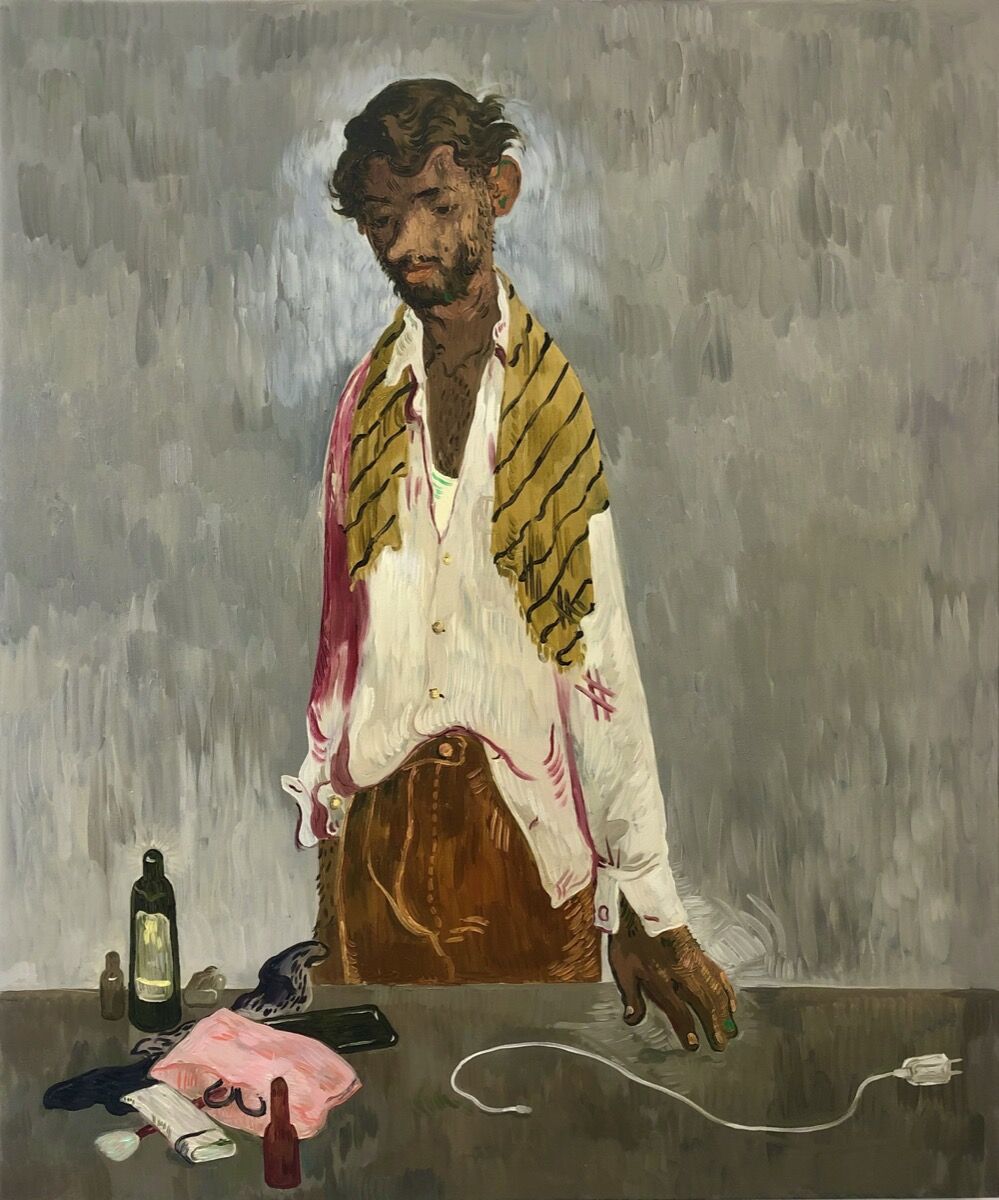 Salman Toor, Man with Face Creams and Phone Plug, 2019. Courtesy of the artist and Whitney Museum of American Art. 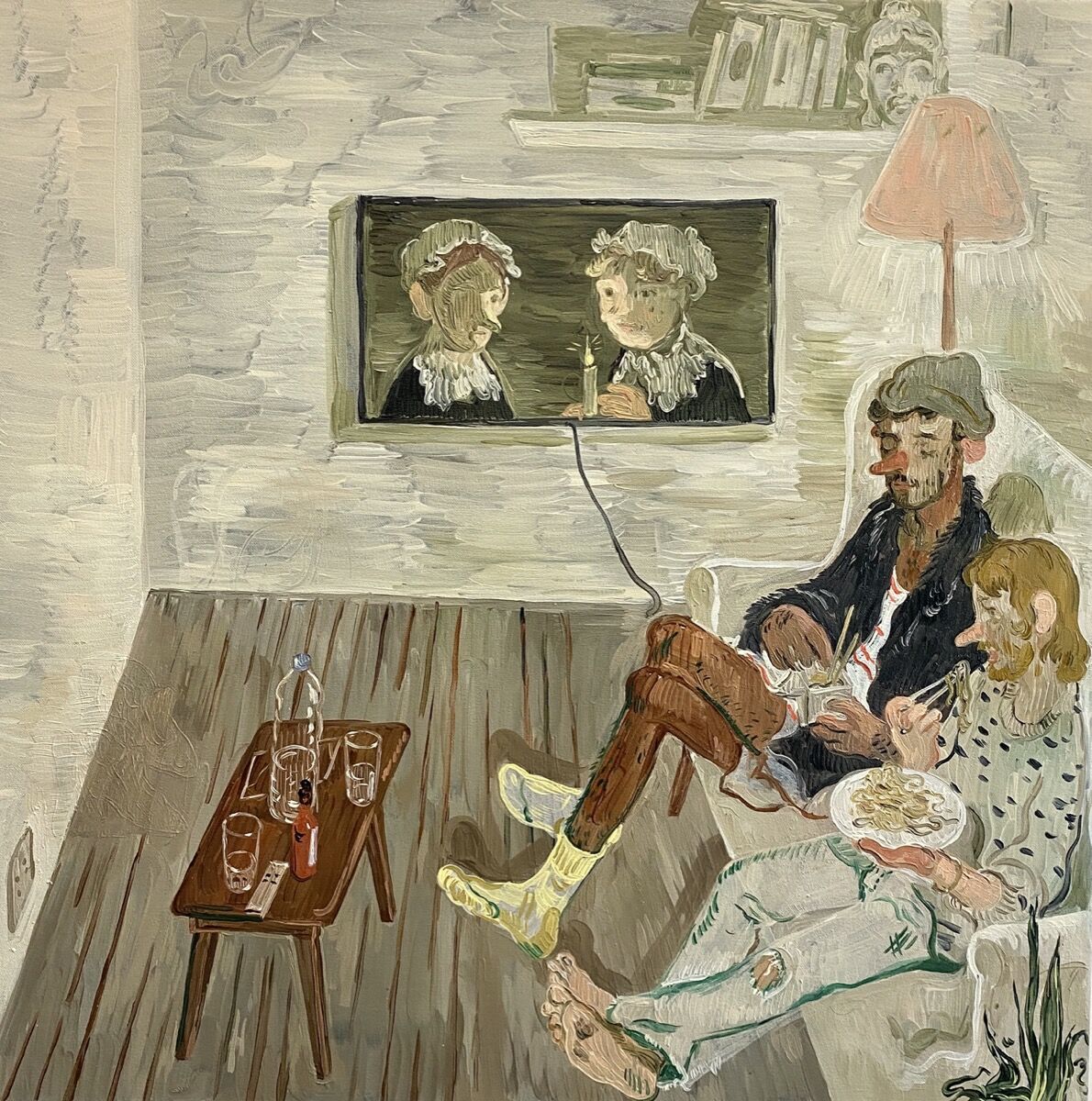 These paintings address the idea of “being anywhere, or being nowhere,” said Whitney curator Christopher Y. Lew. Against “drab bureaucratic backgrounds,” Toor creates figures who are “moving from one country to another, across borders, presented in space that has no grounding,” Lew added.
Toor pays as much attention to clothing in his party scenes as he does in his immigration canvases. He noted how important depictions of fabric were in paintings of the 17th and 18th centuries, when they were markers of luxury and bourgeois comfort. “I want to recreate that historical excitement—that sheen of satin or lightness of linen,” Toor told me. He’s particularly enamored with big waistcoats, layered clothing, intriguing color combinations, and lots of buttons. 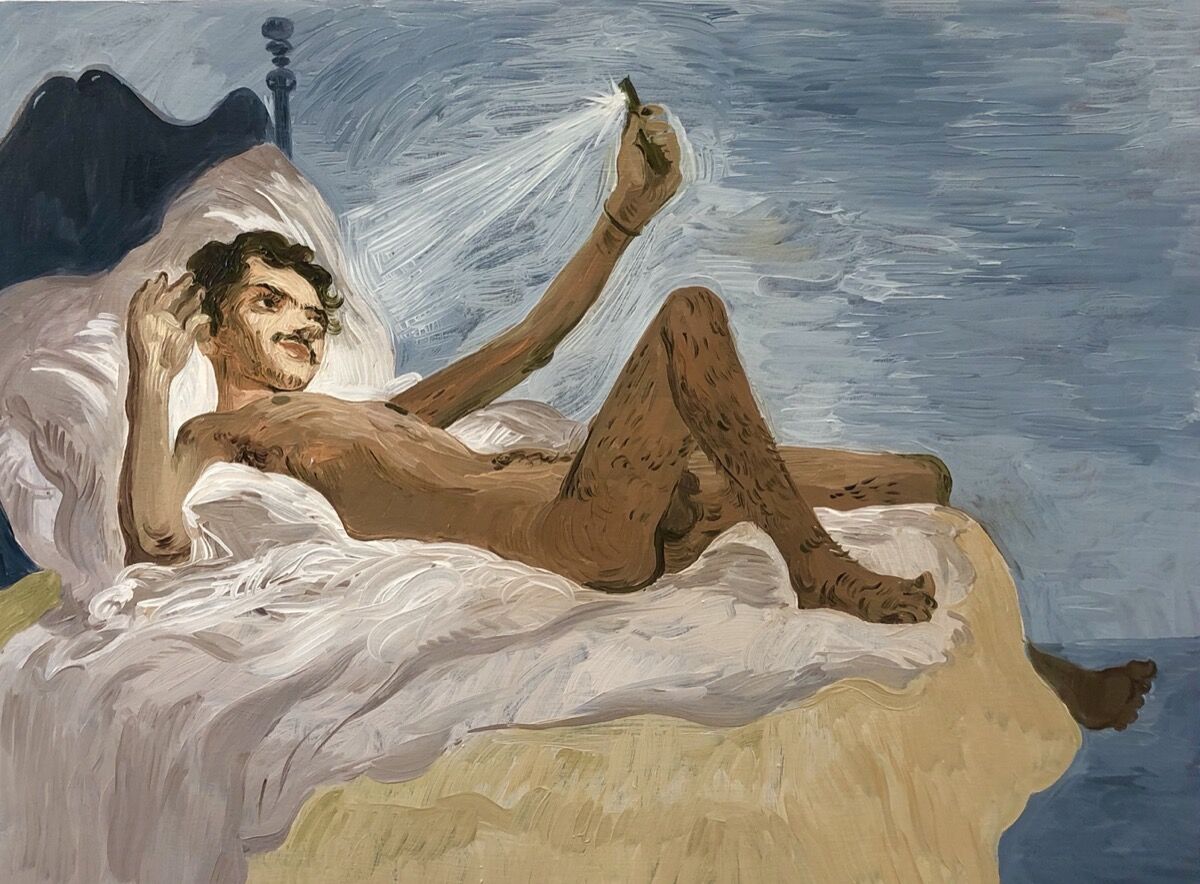 The artist updates old art traditions in more humorous ways, as well. In Bedroom Boy (2019), he’s painted a man in the position of a traditional, reclining odalisque, snapping a nude with his phone. The Bar on East 13th Street (2019) riffs on
Édouard Manet
’s famous A Bar at the Folies-Bergère (1882) by giving the central, gender-bending bartender dark painted nails and pigtail braids.
Lew’s collaborator in organizing the show, curatorial assistant Ambika Trasi, first saw Toor’s work about five years ago at New York’s Aicon Gallery. “Salman talks about entering the brown body into the language of the humanities. It felt really fresh,” Trasi said. She admires Toor’s ability to simultaneously represent reality and reference art history, while “tapping into the experience of living in New York City for people of color,” she said. 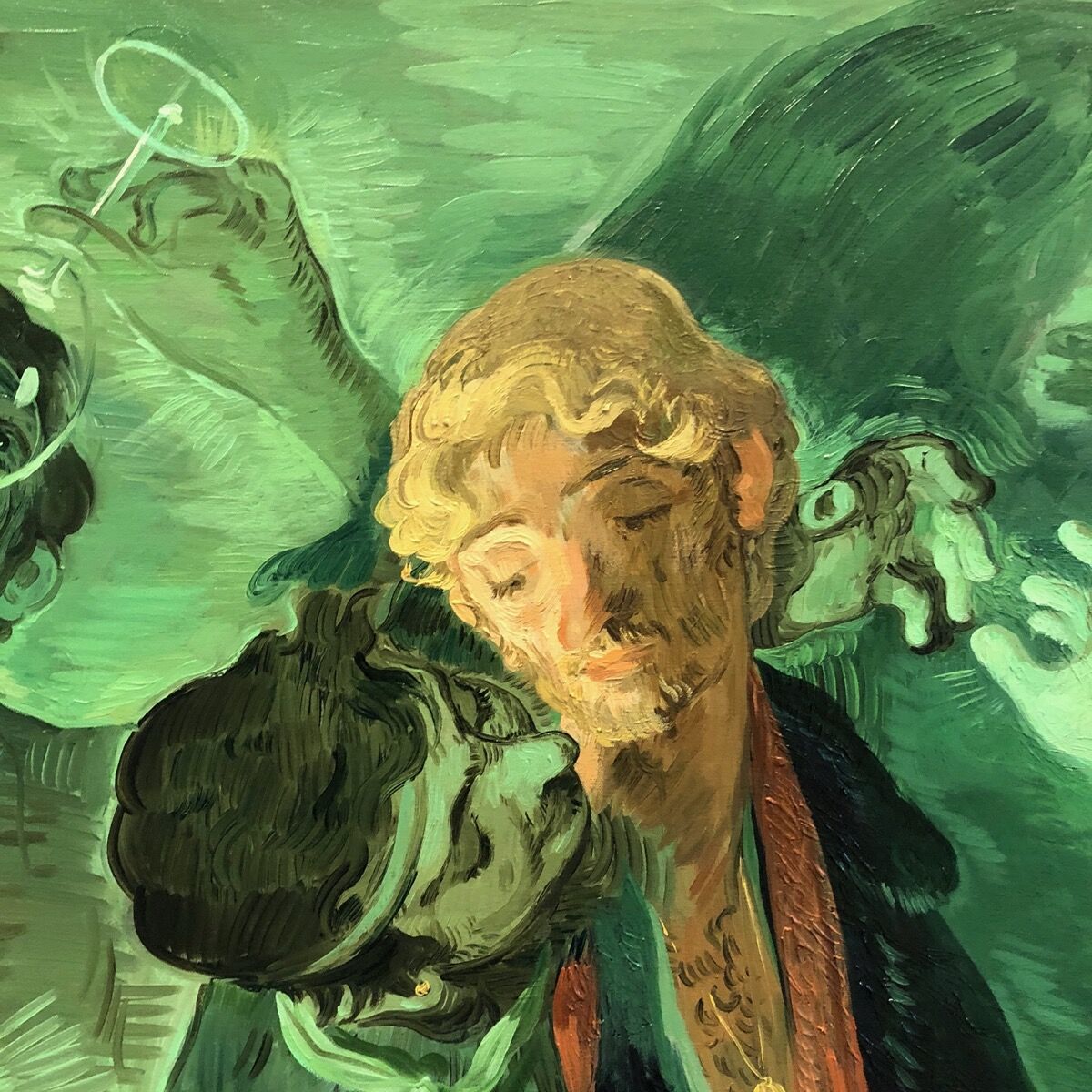 Detail of Salman Toor, The Green Room, 2019. Courtesy of the artist. 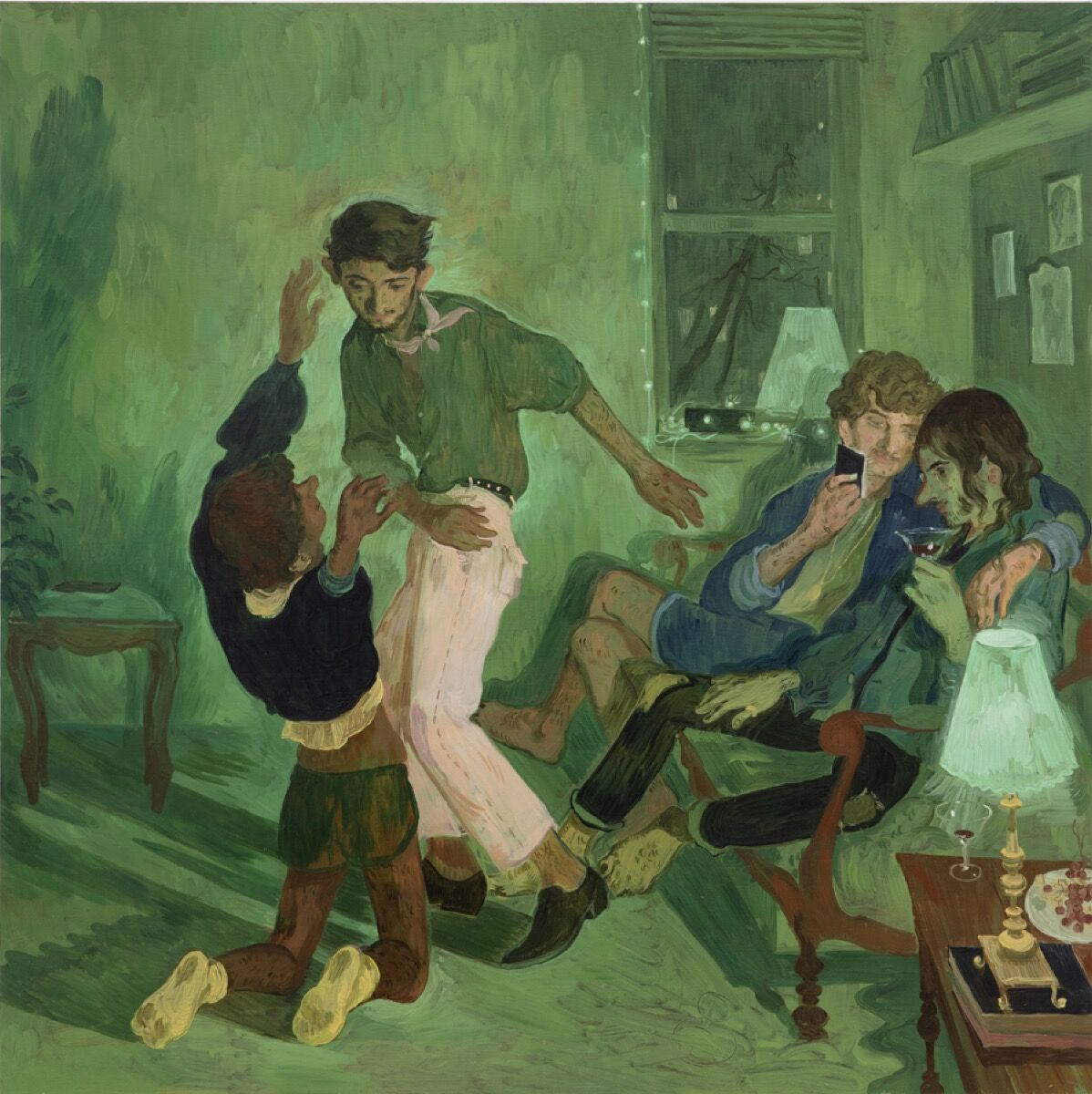 The term “people of color” takes on new meaning in Toor’s paintings, where figures are bathed in emerald light. “I’ve thought of green as glamorous, poisonous, nocturnal, nostalgic, but not sentimental,” he said. The hue, for him, relates less to the absinthe in old Parisian cafés than to the aura of Slytherin (the artist himself, however, identifies as Ravenclaw or Hufflepuff).
Picasso
long ago colonized blue and rose. Toor has made a green period all his own.
Since confinement started in New York, the East Village–based artist hasn’t ventured out to his Bushwick studio. Oil paint is too toxic to use in his apartment, he explained. Toor has made hundreds of little drawings, though, which he thinks of as lists. And he’s been cooking, too. He enumerated the traditional Pakistani Indian dishes he’s made, including vegetable curry, daal with roti, chutneys, and yogurt-based raitas.
Throughout his life, Toor has adapted to a new continent and to imaginative new ways of artmaking. He’s swiftly adapted his own creativity, enjoying the pleasures of time and solitude while waiting for life—and his Whitney show—to carry on where they left off.
Alina Cohen
Related Stories