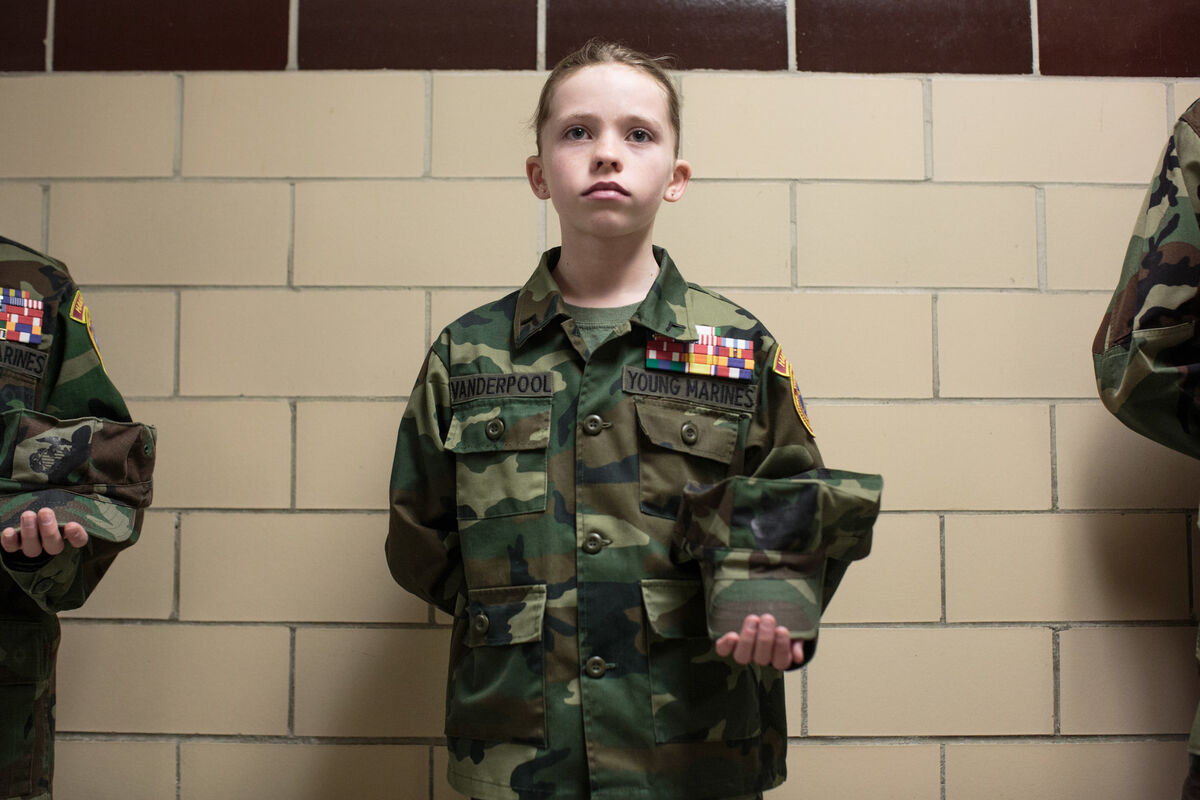 Sarah Blesener, from the series “Beckon Us From Home,” the United States of America, 2017-18. © Sarah Blesener / CatchLight Fellowship / Alexia Foundation. Courtesy of the artist.

More than 200,000 children and teens participate in patriotic camps and clubs in Russia, where they are taught national, military, and religious ideology; play sports; and practice weaponry—ultimately to be instilled with civic responsibility and, for some, to prepare for service in the Russian army. The web of programs, first started in the Soviet era, were reinvigorated following a Kremlin proposal entitled “Patriotic Education of Russian Citizens in 2016–2020,” which called for an 8 percent increase in patriotic youth and a 10 percent increase in Russian armed forces within the next decade.
Sarah Blesener
was fascinated by these objectives. “It’s very Russian,” she said with a smile, “having these arbitrary mandates and goals.” The 26-year-old photographer, who was raised in Minneapolis and now lives and works in New York City, studied adolescent psychology and Russian as an undergrad; when she later enrolled at the International Center of Photography (ICP) in New York, her previous studies lingered. In 2016, a week after completing ICP’s program, Blesener booked a ticket to Russia to start what would become her first series: “Toy Soldiers.”
Thousands of miles away from home, Blesener expected her time at the Russian camps and clubs to feel foreign. It didn’t. “I thought I was in the Midwest a lot of the time,” she said. “That conservative mentality, the military and religion mix is really strong in Russia.” She stayed a week or two in each of the five camps she documented. Some of her subjects, who ranged from 11 to 20 years old, wanted to know why Americans hated Russians. The Cold War mentality hasn’t gone away, she replied, and propaganda is deeply ingrained. “The same fear you have is the same in our media,” she said. 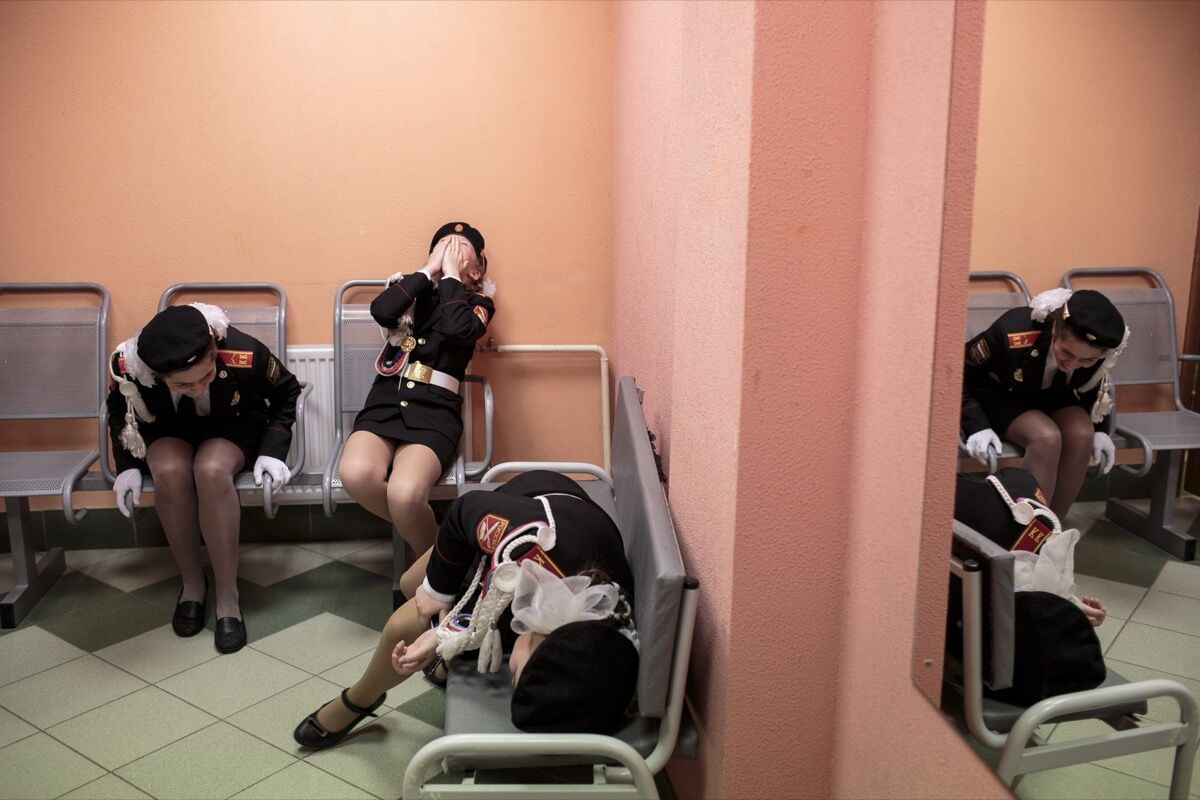 Much of the rhetoric that Americans were hearing during the 2016 presidential election was similar to what Blesener saw. Even before Trump’s decreed slogan, she saw at one camp a campaign called “Make Russia Great Again.” Nothing is new or confined to a single place, she realized; our ideas are universal and cyclical, repeating in different forms. Issues of nationalism, which has seen a surge in recent years, are not confined to Russia. “They’re global,” she says now, “and they’re very, very American.”
When Blesener began sharing her photos from “Toy Soldiers,” she was delighted to hear from editors she had always wanted to work with. But frustration quickly set in: Photos of kids with guns—albeit fake ones—were an automatic trigger for audiences in the States. So she also shared photos of boys playing on a beach and uniformed girls in a fit of giggles to paint a fuller picture of a coming-of-age story—one that might provoke discussion about a commonality with American ideals. “But in the end,” she said, “it was really like, ‘It’s Putin’s youth army.’” Clickbait boiled her work down to “Russian kids holding AK-47s,” and while the articles are often thoughtfully reported, too many readers look no further than the sensationalist headlines.
“I really thought the series would spark a kind of dialogue about our own election, about nationalism,” Blesener explained. But the timing with the U.S. election only escalated the generalizations about patriotism and nationalism that she was trying to unpack. Blesener didn’t want her subjects to feel betrayed. They were, in fact, disappointed, she said, but many laughed it off—they had assumed the American media would use the photos in that way.
The experience made her realize it was time for a new chapter. Last year, she began “Beckon Us From Home,” a project on patriotism and traditions instilled in young Americans. “In these settings,” Blesener reported in her artist statement, “around 400,000 American youth are taught annually, often with military subtext, what it means to be an American.” She visited the Young Marines program in Hanover, Pennsylvania; the Utah Patriot Camp in Herriman, Utah; and the Border Patrol Explorer Program in Kingsville, Texas, among others. Her project took her to 12 programs in 12 different states, many of which she had never visited before—it was eye-opening. 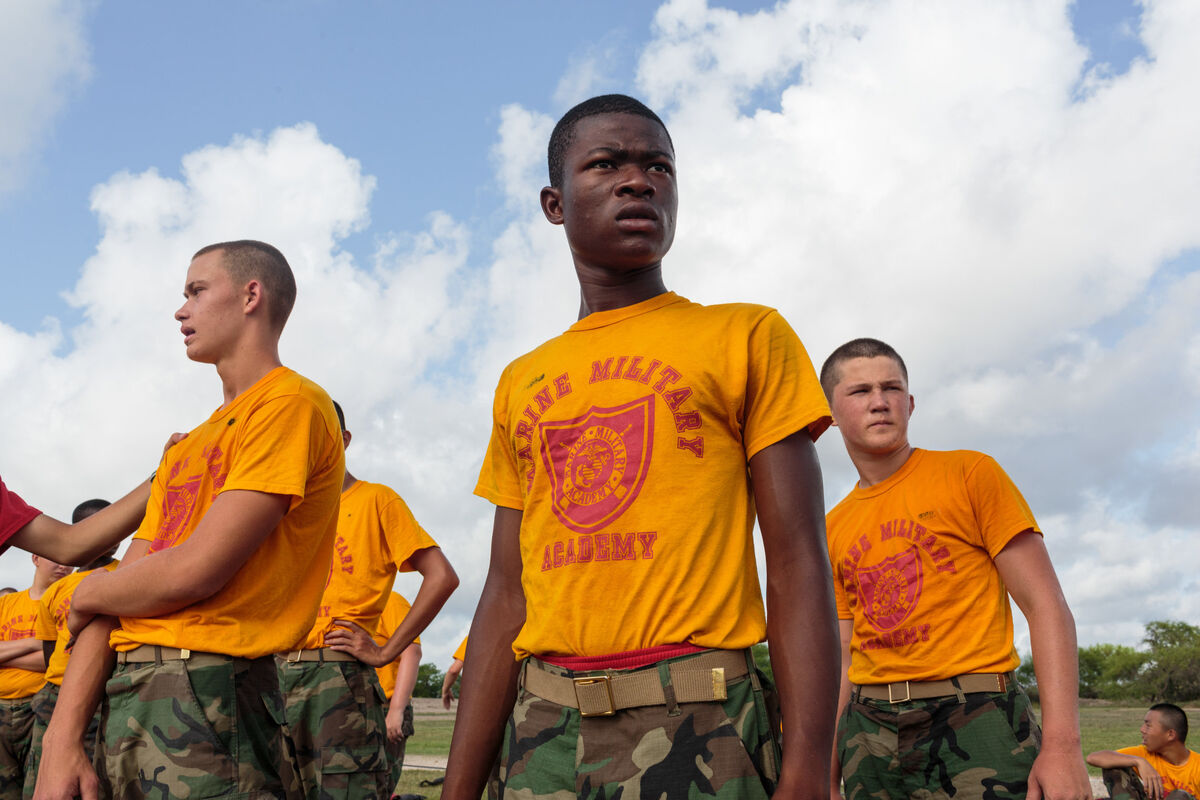 Sarah Blesener, from the series “Beckon Us From Home,” the United States of America, 2017-18. © Sarah Blesener / CatchLight Fellowship / Alexia Foundation. Courtesy of the artist.

Advertisement
Blesener found those in charge of American patriotic programs to be “more guarded” than their Russian counterparts—speaking the same language, which had helped her gain access overseas, didn’t have the same effect in the U.S. What gave her the green light, to her surprise, was showing them “Toy Soldiers,” which seemed to spark their desire to compete. “They asked me to let them know how they compared,” she says. “That was a real question I was asked.” Another question was whether she would cast them as “the alt-right.” Blesener would not, she told them. While she did photograph families of the neo-Nazi National Socialist Movement, she only used one of those photos in “Beckon Us From Home.” It was important to include in her larger exploration of patriotism, she explained, “but if you focus only on the extremes, you miss the entire body.”
In Russia, Blesener kept “Toy Soldiers” focused on the confines of the camps and clubs, but in the U.S., Blesener spent significant chunks of time with her subjects off duty and back in their hometowns—like 17-year-old Elizabeth Nelson, who had enlisted in the army, hanging out at her school’s football game in Omaha, Nebraska, and a group of friends at July 4th celebrations at the Fort Berthold Indian Reservation in North Dakota. Blesener would ask them how they got their information and news (Facebook) and about anxieties they face (school shootings).

4 Images
View Slideshow
“A lot changed after Florida,” she said. “A lot of the programs are based on the rhetoric that was happening during the 2016 election—competition, greatness, fear of outside influence.” But after a gunman opened fire at Marjory Stoneman Douglas High School in Parkland earlier this year, killing 17 students and staff, the kids Blesener talked to said they joined their program because they wanted to go to school and protect their friends. “The fear became internal,” she noted, extending far beyond Florida and its neighboring states.
Some reasons for attending the patriotic clubs stemmed from the deeply ingrained American right to bear arms. Blesener met a 9-year-old at a survivalism camp in Florida who nearly killed himself after finding and accidentally firing his father’s gun. He was sent to the camp to learn gun safety. But given the age group she was working with—8 to 18 years old—Blesener said that “the reasons that you’re there are so complicated. It usually is stemming from totally different reasons than you’d expect.” 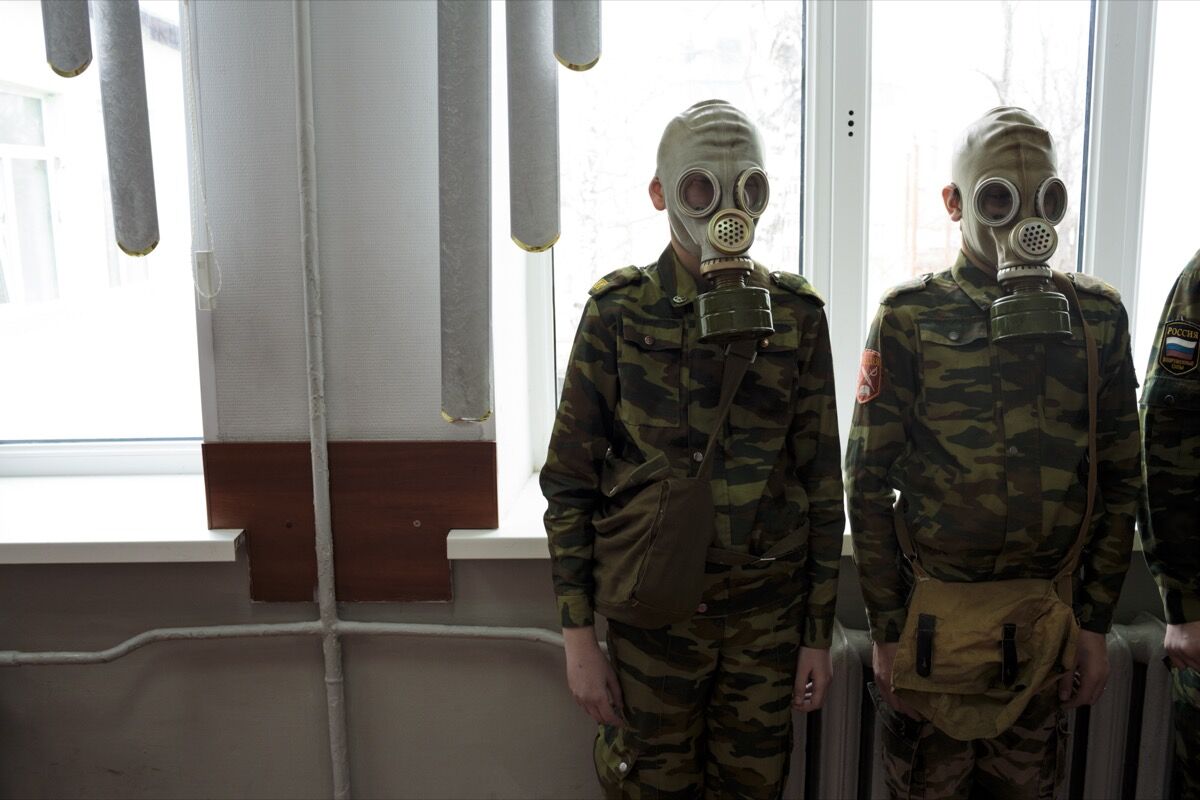 She could relate to that. Having been raised as part of a religious group that she eventually left, Blesener grew up with ideologies that were given to her. “I understand being in it and believing it,” she said. “A lot of these kids are probably not going to be involved in it when they’re older.”
That meeting place of certainty and uncertainty is worth exploring, she said. “What I like about that young age group is that they muddy politics. There’s no black and white, even if they’re in an extreme group. I think that complication they bring to this story is perfect.”
Still, Blesener did come into both “Toy Soldiers” and “Beckon Us From Home” with some expectation of what she might find: “a standard to measure against,” or a “solid belief system,” she explained. “Instead, what I found were so many counter-narratives that combined into this interesting vignette of what patriotism means. The standard doesn’t necessarily exist, or it’s different for everybody, and that’s the conversation that we should be having.”
While she found that Russian citizens are aware of their country’s youth programs, many Americans have no idea that they exist in the United States. Blesener’s project shines a light on this truth, asking viewers to reexamine their thoughts on patriotism at home and abroad. At a contentious time in American history, Blesener encourages introspection, and while her intention is not to unhinge anyone from deep-seated ideals, she would like to show that what’s happening over there is happening here, too. To be fearful of them is to be fearful of you. And while viewers will feel what they feel, Blesener hopes that it’s empathy. “At the end of the day,” she said, “they’re just teenagers.”
Libby Peterson
Related Stories