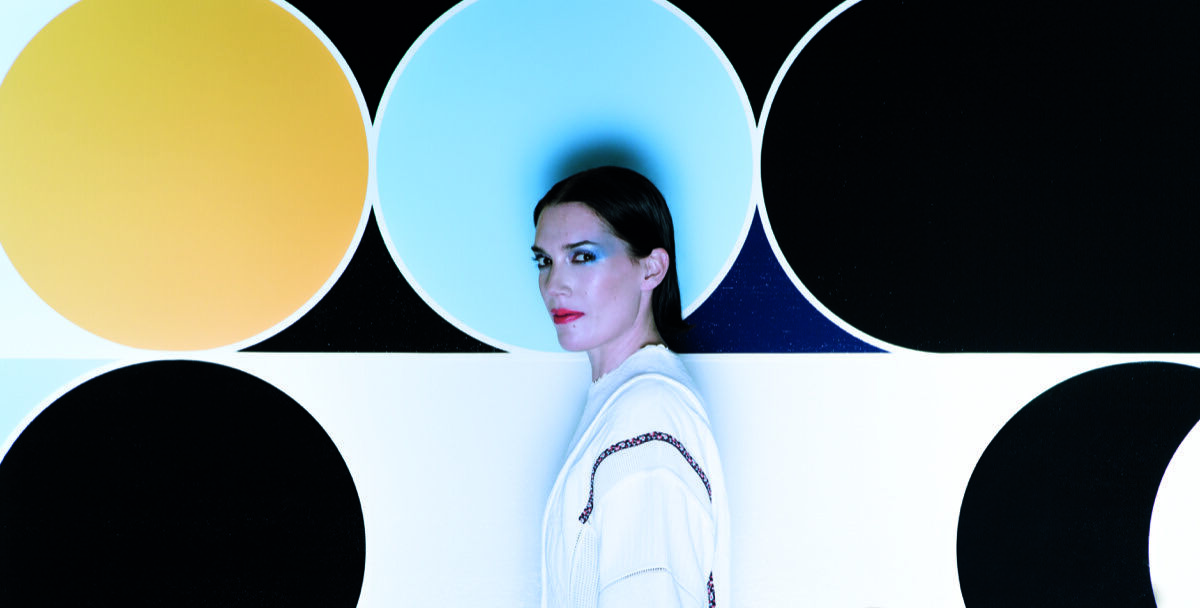 The historic GoldenPass railway that weaves through the Swiss Alps is already beloved for its idyllic views and punctuality. But now, thanks to American artist
Sarah Morris
, it’s benefitting from a train that doubles as a work of art.
Morris unveiled the 54-meter-long train, titled Monarch (2017), in Gstaad, Switzerland, earlier this month, and for the next four years it will transport commuters and tourists between Montreux and Zweisimmen. Like her paintings, made from crisp graphic lines and vibrant tones, the train is shrouded in blocks of color. As its title suggests, it was inspired by the stripe-suited caterpillar of the Monarch butterfly.
“Wherever I go, I’m always interested in trains,” says Morris. And her first trip to Gstaad, years ago, was no exception. “I was extremely interested in the train timetables, how they function, and how you arrive there,” she notes. Monarch is one of 11 new site-specific artworks that have taken over the resort town for the citywide exhibition “Elevation 1049: Avalanche,” curated by Neville Wakefield and Olympia Scarry, which runs through March 19. 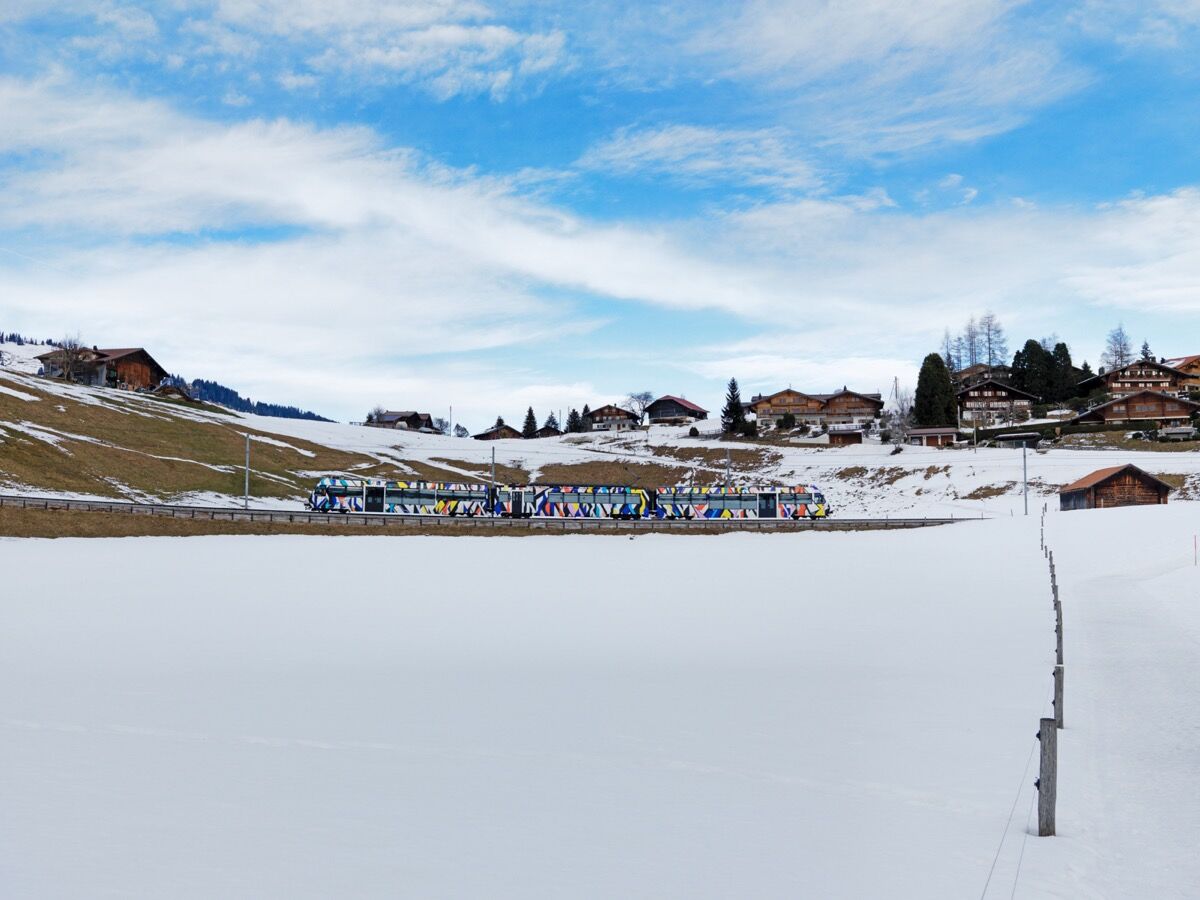 When she was approached by Wakefield and Scarry, some two years ago, to create a work for the exhibition, Morris started thinking about the remoteness of the city—the way its visitors and residents depend on the trains, and the public space that trains create and occupy.
The show’s organizers helped Morris reach an agreement with the Swiss rail company that services the region, Montreux–Oberland Bernois, allowing her to transform the train’s exterior for a four-year stint in the Alps. Given the specs of the locomotive, Morris and her team spent six months fine tuning the composition; she estimates that six or seven of her paintings went into the final work. Once finalized, the renderings were sent to a Swiss company that printed colored stencils that were applied to the train.
The train was a natural direction for Morris’s work. In both her paintings and her films, she conveys the motion and vitality of the vehicle and its passengers. For her films, Morris has captured footage in train stations, airports, and other transportation hubs in Paris, Washington, D.C., and Beijing. And in her paintings, she builds matrices and fluid grids that seem to pulse with energy. “There’s a sense of movement and anticipation that is very palpable in the films, but also in the paintings,” says Morris. 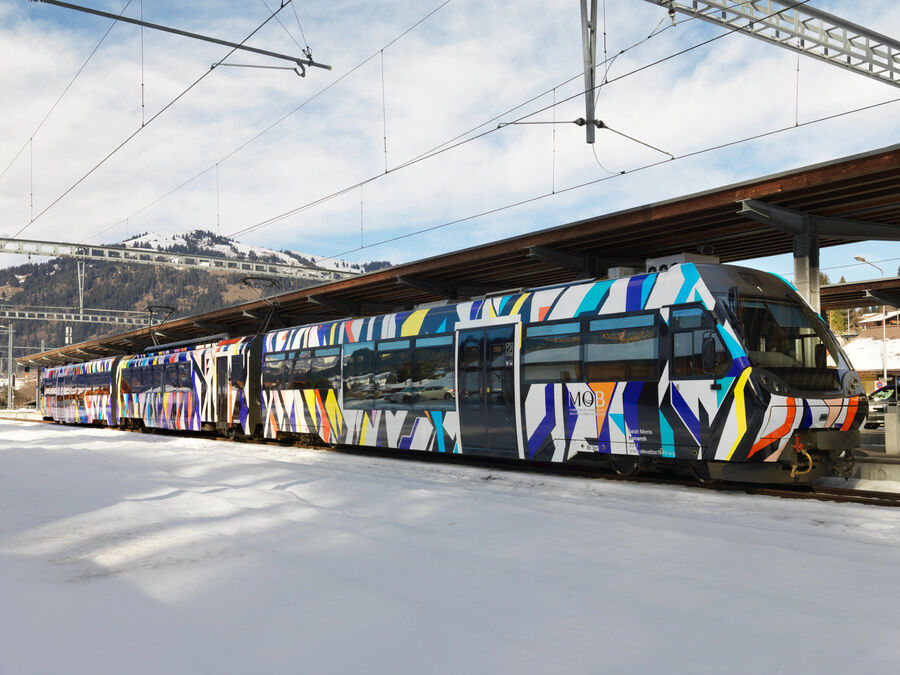 Advertisement
She notes that Monarch relates to her paintings, which debut at Petzel Gallery in New York this week. The works delve into ideas of landscape, erasure, and QR codes. However she arrived at inspiration for the creature through a far different source: the Russian-American novelist Vladimir Nabokov. “I’ve been interested over the years in how Nabokov retired in Montreux,” Morris explains, pointing to the town that is the westernmost hub of the train. Nabokov settled there in the ’60s and stayed for the rest of his life—and was an avid butterfly collector. Morris was drawn to the particular caterpillar for its color and patterning, and it prompted her to think about the idea of camouflage.
“I want to viewers to feel like the artwork is part of a much larger grid, a much larger conversation of places and people; it connects people from one place to another,” Morris says of her intent for the work. “In short, a sense of communication, of connecting people and going somewhere. Maybe you don’t know where your destination is, but you get that sense of arrival and anticipation.”
Casey Lesser is Artsy’s Lead Editor, Contemporary Art and Creativity.
Related Stories