How the Scandal around “Sleepwalker” Foreshadowed Today’s Culture Wars 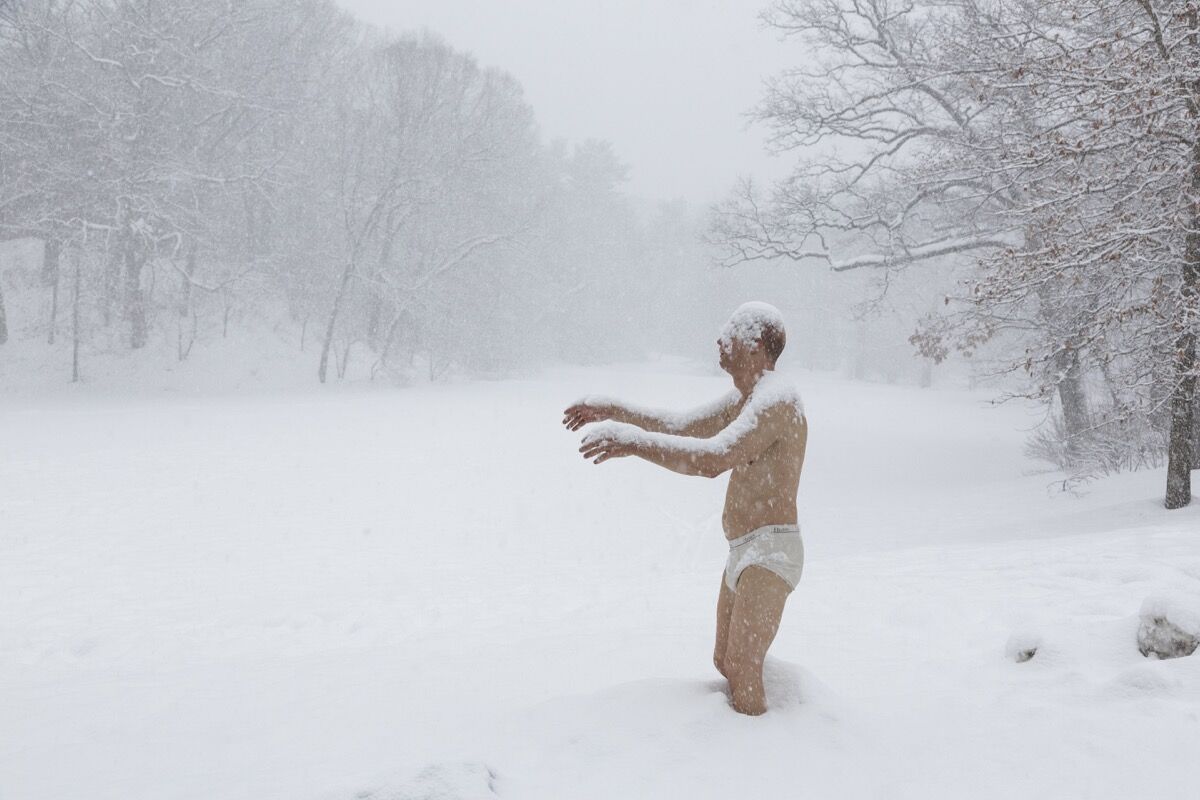 A blizzard hit the Wellesley College campus in early February 2014, but the administration had a bigger problem than the weather on its hands. A crisis was brewing around artist
Tony Matelli
’s Sleepwalker (2014), a hyperrealistic sculpture of a 5’9” man somnambulating while clad in just white Hanes underwear. Now, snow covered its feet and adorned its head and outstretched arms.
The Brooklyn-based artist had installed the piece outside of the college’s Davis Museum, which was hosting a concurrent exhibition of his work. Sleepwalker was immobilized in the frosty landscape, but students saw a threat and created a petition for its removal from the lawn. Their claims that the sculpture produced apprehension, fear, and triggering thoughts about sexual assault on the all-women’s campus—well-founded or not—in many ways presaged the debates still raging today about free speech and abuse.
Matelli himself responded with disbelief. The story reached major news outlets from the New York Times to the Wall Street Journal; the artist woke up to a text message from Good Morning America. “We realized it had turned into something pretty ridiculous,” he told Artsy recently.
After all, Matelli’s intentions were good. For aesthetic reasons, he wanted his sculpture to look maximally lost, alone, and vulnerable. He’d even taken specific safety precautions: He and museum director Lisa Fischman had thoughtfully placed the work in a location where it wouldn’t distract nearby drivers. 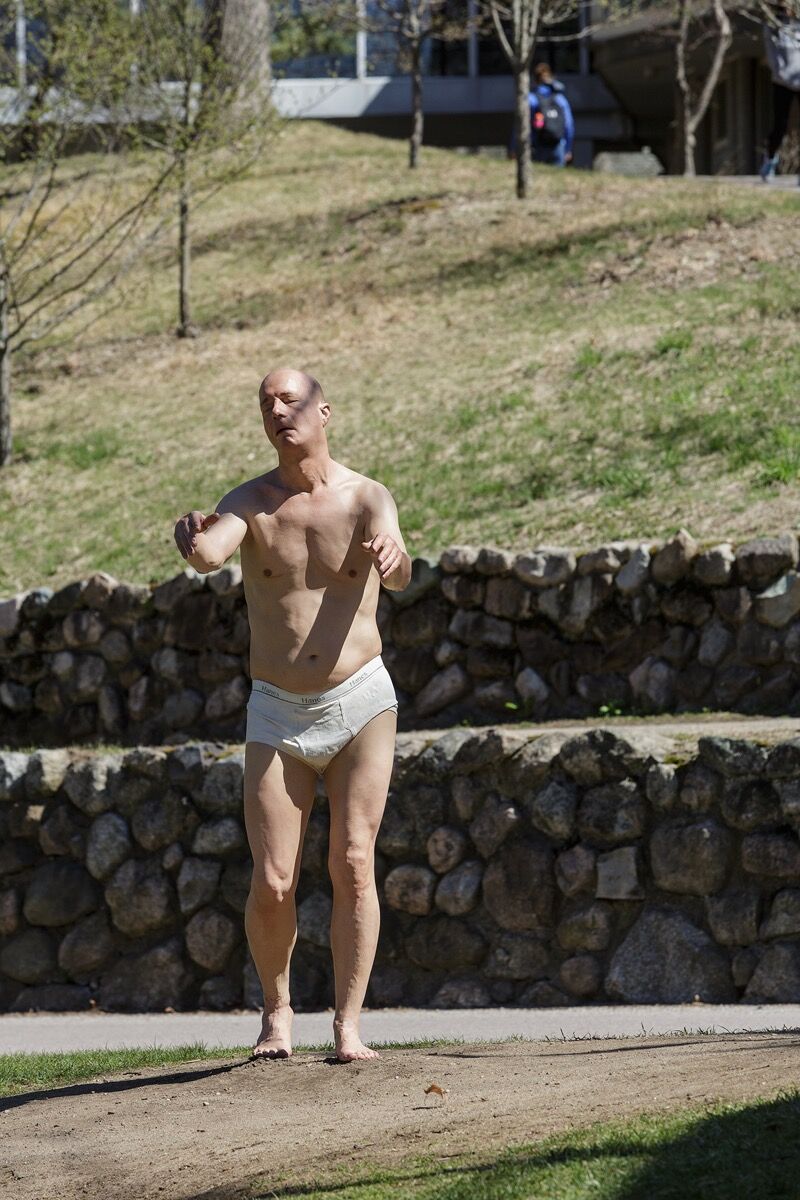 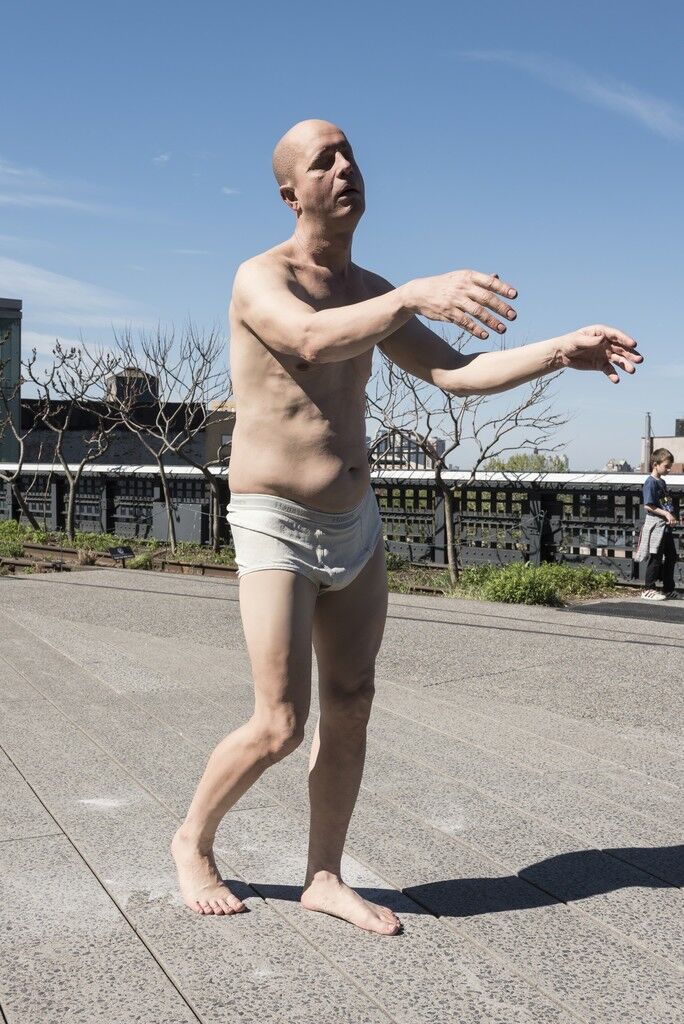 Tony Matelli
Sleepwalker, 2014
"Wanderlust" at High Line Art, 2016
Yet the pair agreed to attend a roundtable discussion with student leaders, as well as the president and counselors from the university. “It seemed like the sculpture was beside the point,” Matelli recalled. “This really was about being listened to. They wanted to exercise their civic and political voices and this is how they chose to do it.”
Fischman also questioned just how much the outpouring was really about the artwork. She was initially confused by the ire, as the students’ response to the piece was so different from her own. “In the end, as I suspected, the matter was not just about art,” she said. “What the students really wanted was recognition of and dialogue around sexual assault. The piece activated the student body in ways that were entirely unexpected, but of course were germinating long before its installation, and remain in play today.”
Ultimately, Fischman decided to keep the artwork on view outside. The power of the sculpture, she thought, resided in its ability to provoke such disparate viewpoints and catalyze so much discussion. “Sleepwalker engages people viscerally at an emotional level,” she said. Even if they sometimes select the wrong targets, the growing student passion and activism around the country may yet lead to substantive change.
If the sculpture could withstand public debate, it wasn’t completely safe: In May 2014, a vandal threw yellow paint down Sleepwalker’s left side. Authorities mounted orange cones and “caution” tape around the artwork. Only then did the statue become part of any real crime scene. Insurance paid out, and Matelli bought the work back from the insurance company. He’s keeping it in his personal collection, in its vandalized state. “It is a historical document,” he said. “I’m not emotionally invested in the piece in the way the students obviously were.”
After the rage at Wellesley subsided, New York’s High Line hosted Sleepwalker’s next major public debut, in 2016. This time, the context was strikingly different. Sleepwalker was surrounded by tourists, in a neighborhood full of galleries and some of the city’s most expensive real estate. “Not only was there no pushback, there was almost a celebration about the piece being up there,” Matelli recalled. He’s collected about 1,000 images of people taking pictures with the sculpture. It was a hit on Instagram and Twitter. In two years, Sleepwalker had transitioned from an alleged menace to a selfie prop. 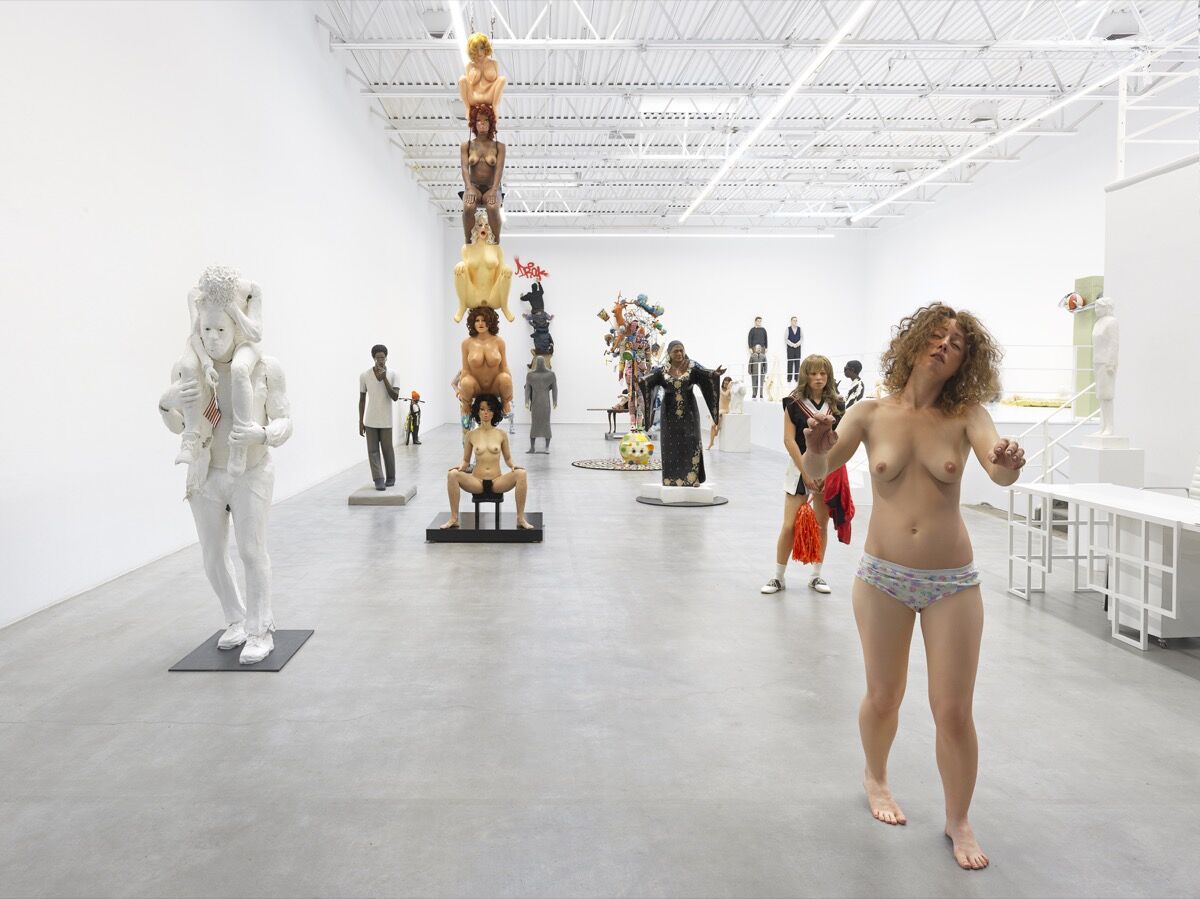 Advertisement
Currently, a female version of Sleepwalker (2009) is on view in “People,” an exhibition of figurative sculpture on view at Jeffrey Deitch. In the show, Matelli’s creation is positioned in such a way that she appears to lead an army of lifelike sculptures. This Sleepwalker stands nude, save for a pair of floral Fruit of the Loom underwear, her arms extending toward the street. She has a full head of curly brown hair, which the artist said makes her unsuited for the outdoors. Her bare breasts also make her difficult to show, due to what Matelli called “issues of modesty and whatever other Victorian ideas people have about the human body.”
Why did the nude male Sleepwalker create such angst, whereas nude female version has presumably not? If the Wellesley students’ calls for the statue’s removal can seem downright conservative in this context, they also indicate a larger problem that no single artist or museum director can actually solve: Why a half-nude man (fake or not) inspires such fear in undergraduate women.
In all, eight variants of Sleepwalker exist: three each of the male and female, and two cast from a younger man (a friend of Matelli’s). Older male versions are situated outside, one on a Hamptons beach. Yet Matelli calls the Wellesley installation his best. He’d conceived the work specifically for the space, giving it ample room.
“I think people should feel safe on campus, obviously, but they can’t feel safe from dangerous ideas,” Matelli said, looking back on the brouhaha. “That is the nature of a fucking university.” What was most threatening about Sleepwalker, perhaps, was its reminder of how vulnerable and exposed we often are. As national and international threats loom, often beyond our control, that conceit becomes increasingly disturbing.
Alina Cohen
Correction: A previous version of this article incorrectly referred to Jeffrey Deitch’s gallery by its former name, Deitch Projects. The gallery’s correct name is Jeffrey Deitch.
Related Stories