Searching for Lee Godie, One of Chicago’s Most Collected Artists

Isaac Kaplan
Apr 28, 2016 7:21pm
In Chicago, myths about the artist
Lee Godie
are something of a currency, and even my grandmother has her own. “She liked your grandfather, but when I saw her at the Randolph Street station and asked to buy a work she—without speaking, she never spoke—would turn her back and walk away,” she told me after I asked her how it came to be that three Godie paintings were hanging on the wall of her Chicago apartment. Evidently, my grandfather bought Godie’s pieces for 5 dollars (15 at the most). In the 1960s, Godie, who sold the works on the streets that were also her home, attracted the attention of gallerist Carl Hammer and others, becoming among the city’s most collected artists. 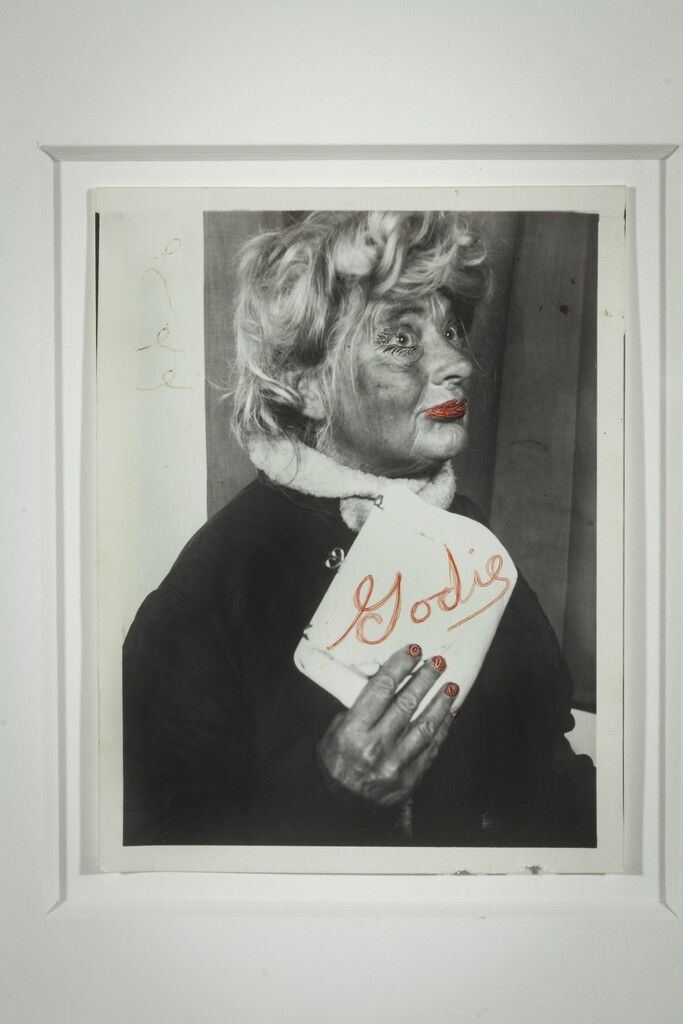 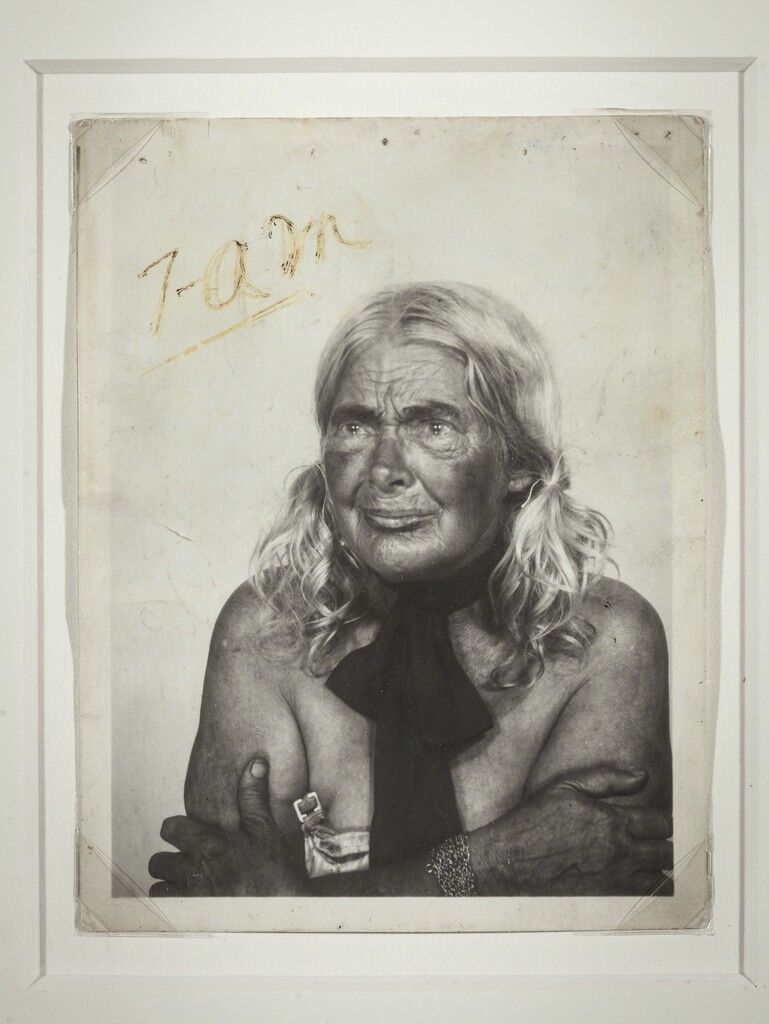 Lee Godie
Untitled (photo booth self-portrait), 1970s
"Lee Godie: Self-Portraits" at Intuit: The Center for Intuitive and Outsider Art, Chicago (2016)
To ask who Lee Godie was is to swim against the rip tide. It’s a fact that makes “Lee Godie: Self-Portraits”—an exhibition of over 50 of the artist’s small, silver tin photos (along with a few paintings) that has traveled from John Michael Kohler Arts Center to Chicago’s Intuit: The Center for Intuitive and Outsider Art—all the more intriguing. She captured the images of herself, each carefully staged, at a photobooth in one of the city’s Greyhound bus stations, mostly during the 1970s. Draped in furs, flashing wads of cash at the camera, and brandishing her collarbone (to her, the most beautiful feature), Godie performed for her portraits, but they’re also “100% Godie,” as curator Karen Patterson told me.
When artists reveal themselves in their work, it’s difficult to know what’s authentic and what’s not. One unsettling, untitled work in this exhibition shows a bare-chested Godie near tears. Is this a performance? Or is this a more candid Godie? To let the poet Yeats ask the question, “How can we know the dancer from the dance?” Rather than answering that question, “Self-Portraits” forgoes overly didactic wall text (and Irish poetry, for that matter), letting Godie present and perplex in equal measure. 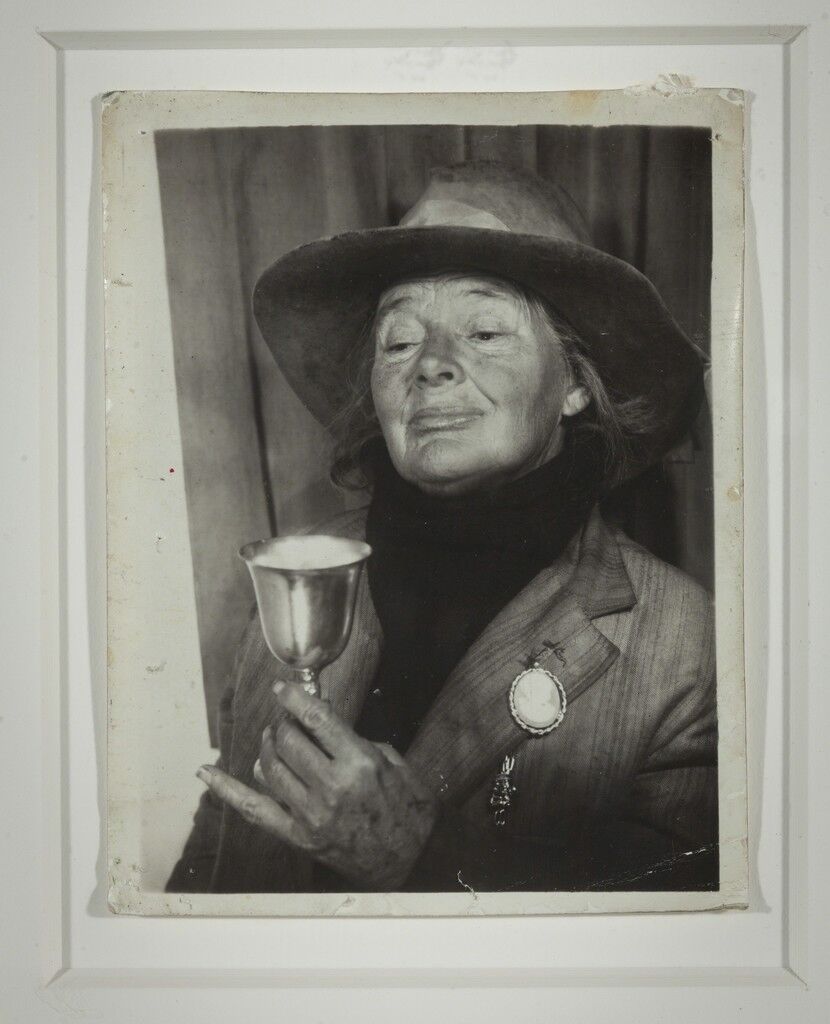 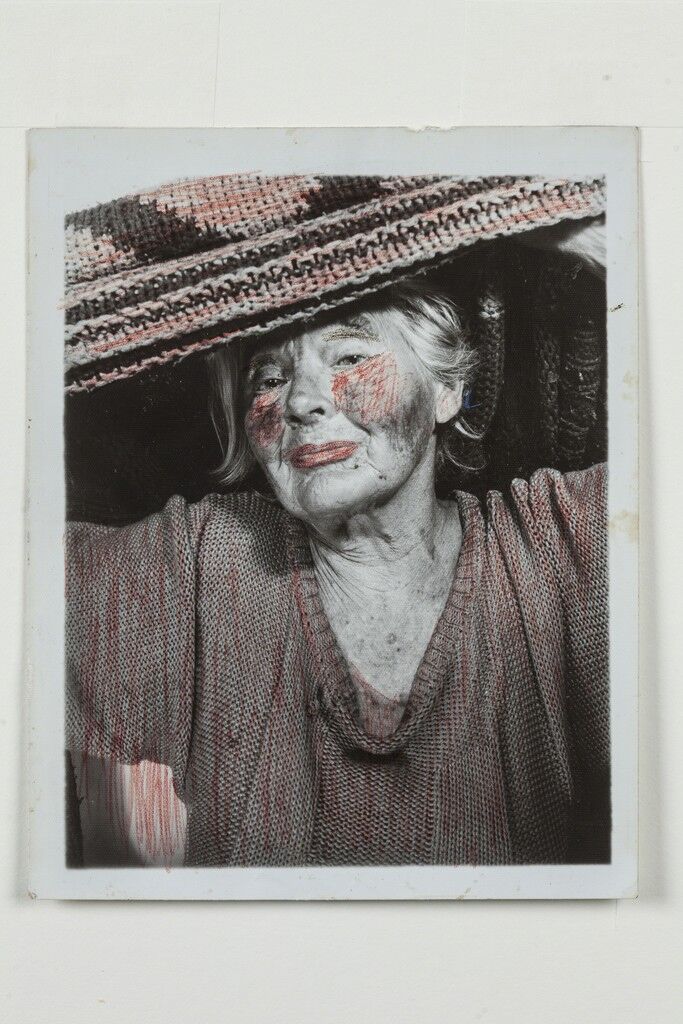 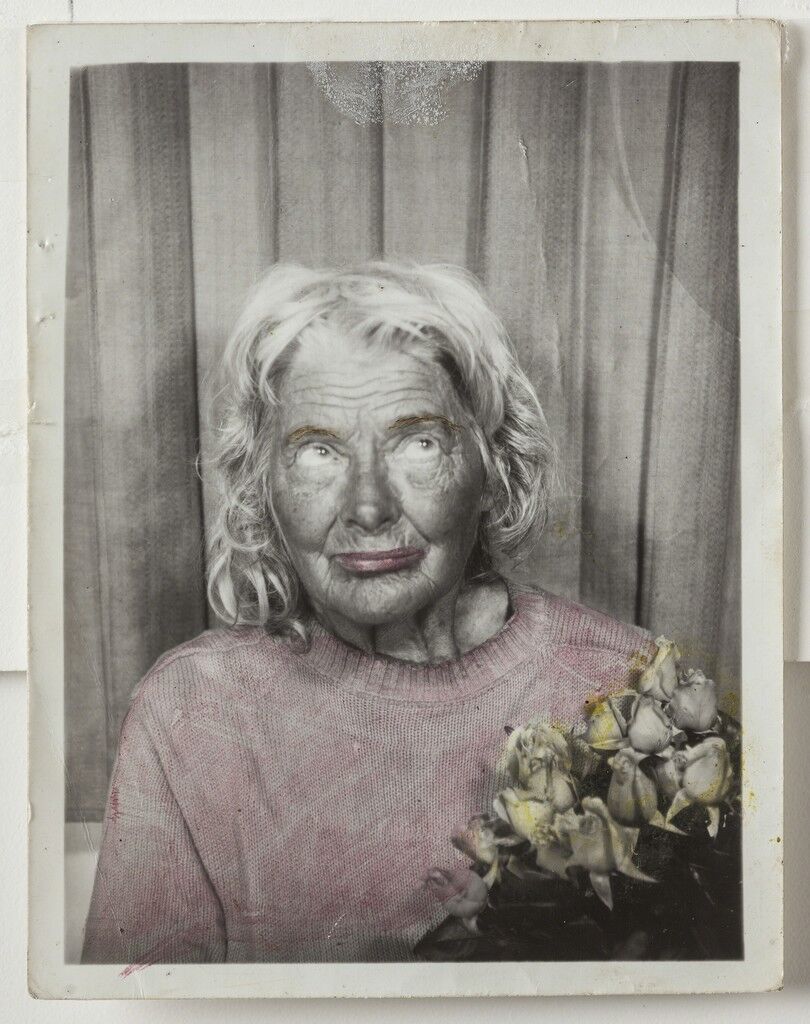 Lee Godie
Untitled (12 photobooth self-portraits, detail)
"Lee Godie: Self-Portraits" at Intuit: The Center for Intuitive and Outsider Art, Chicago
Advertisement
Different portraits show different personas: Godie the Impressionist, Godie the kid, Godie the wealthy socialite. Though personal preference, possibly combined with the effects of mental illness, kept Godie on the streets (poverty was not the issue), she was a gifted salesperson, able to use her self-portraits as promotional tools to sell her paintings. Instead of, or in addition to, a signature, Godie might sew one of the pictures onto a painting. This is one way Godie subverted the “outsider” label so often affixed to her. “She knew how to work it,” says Patterson. “If you were late paying your money, she would charge you more. If she didn’t really like you or liked your boyfriend instead, she would charge you more. It was kind of this micro-art world in how subjective and unregulated it was.”
As the stories have it, Godie would stand on Michigan Avenue (where, according to my grandmother, she sometimes rented a hotel room for a night) or the steps of the Art Institute and roll her paintings down halfway. If she liked the look of you walking down the street, she might unfurl a work and sell it. If not, she rolled them up. I guess there was something about my grandmother that struck Godie the wrong way.
Though her homelessness made her an outsider in the most literal sense, to fixate on this aspect of her life is to miss the work itself. “I always felt the term ‘outsider’ really stopped any investigation,” says Patterson. It’s a categorization that deprives Godie, and many other artists, of agency, relegating them to distant satellites, mere novelties orbiting planet Art World. But Godie “knew what people were drawn to and what makes compelling art,” adds Patterson. Even if one walks away from this exhibition less sure about the artist’s true self than ever, the works demand to be seen on her own terms. 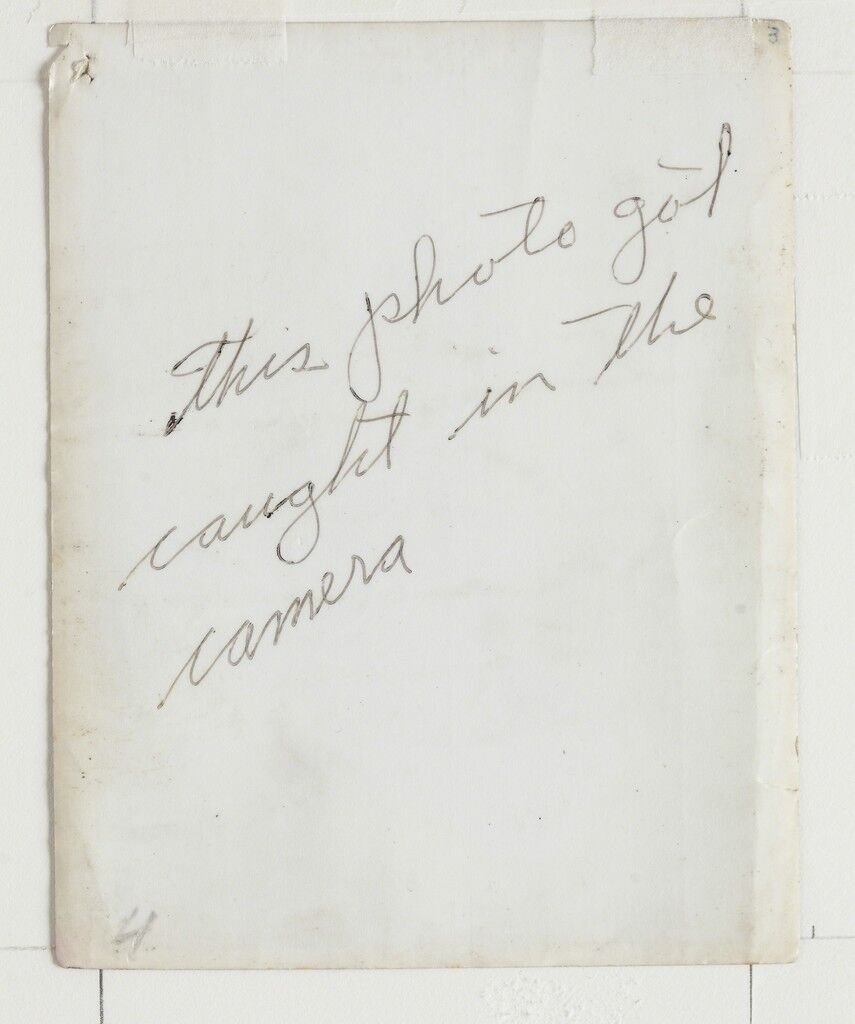 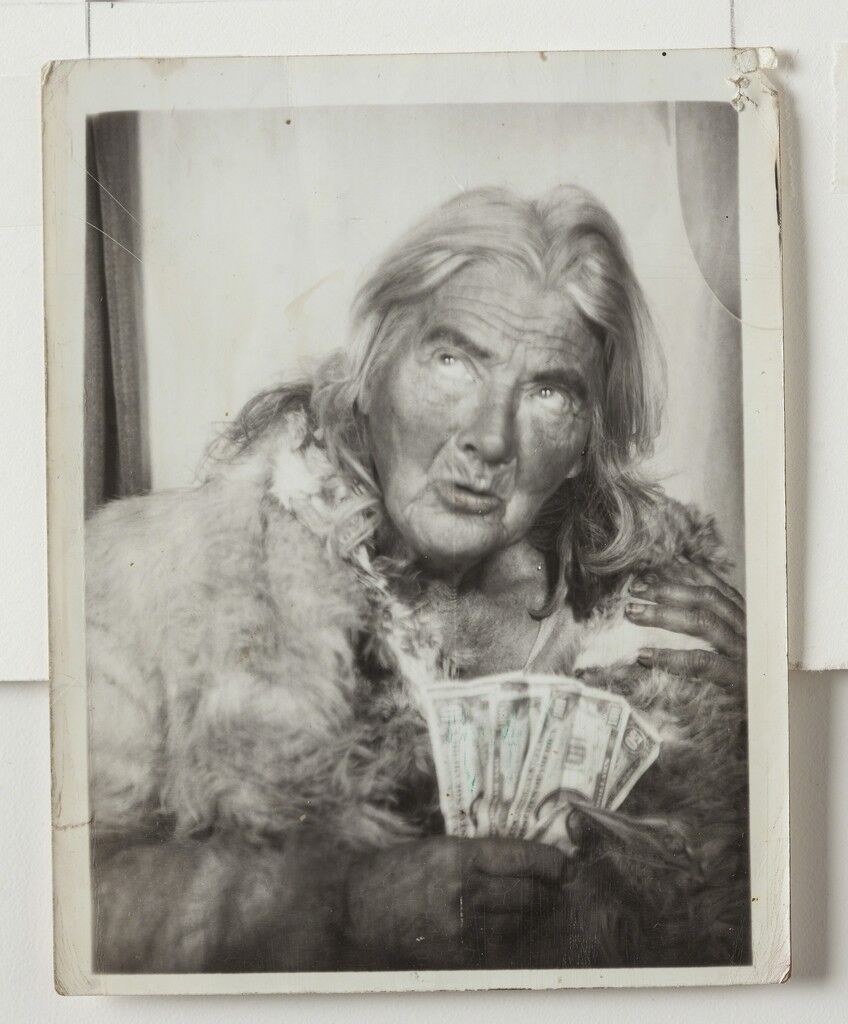 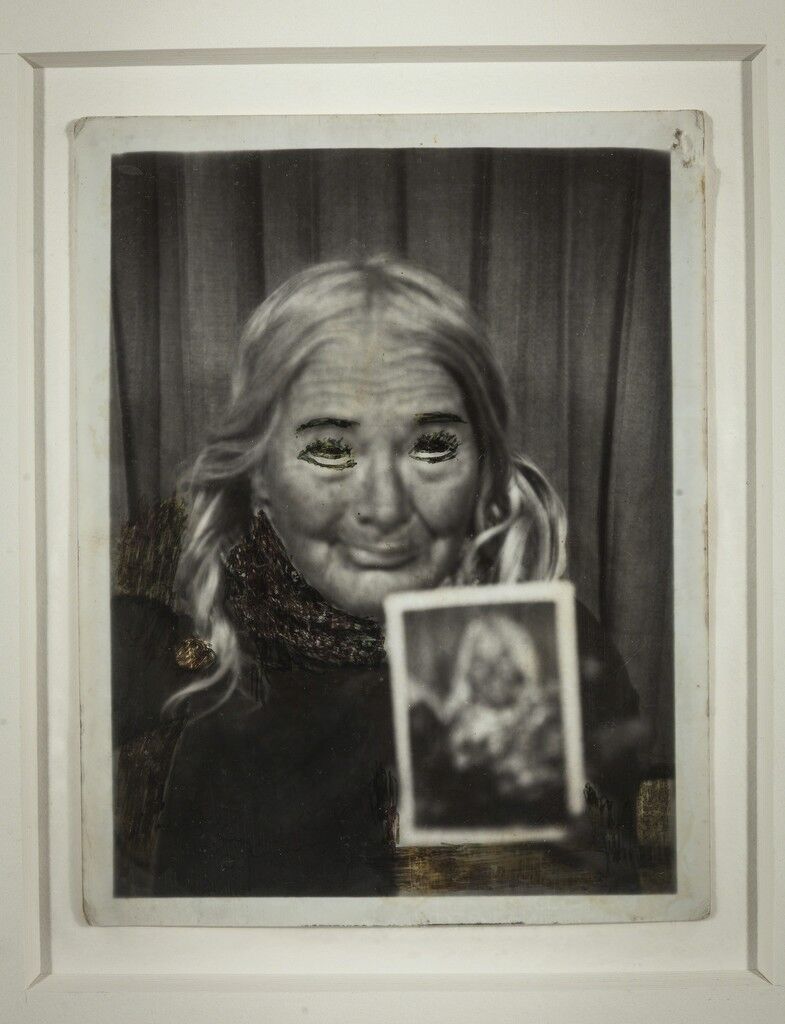 Lee Godie
A girl with roses in the shadows, 1970
"Lee Godie: Self-Portraits" at Intuit: The Center for Intuitive and Outsider Art, Chicago (2016)
One need only look at Godie’s eyes. Also on view at Intuit are some of Godie’s paintings, marked by flat figures with thick lashes and wide eyes that often gaze off canvas. In her self-portraits, Godie’s eyes are just as arresting: She never looks to the same spot twice, and only rarely at the camera. In works that resemble worn daguerreotypes, Godie invites examination and rebuffs it through characters that appear braced for an audience yet rarely acknowledge the viewer. Adding another layer of mystery, she colored over her photographs, sometimes writing her name in cursive, adding rouge to her cheeks, thickening her lashes or, as in the particularly jarring Lee- A Girl with Roses in the Shadows (c. 1970s), blackening her eyes out.
Though she was deliberate and carefully conscious of how the photographs would be perceived (as revealed by her own writing on the images’ versos), viewers may want to glimpse more than what Godie gives us in her self-portraits. Beneath the props and the poses, the harshness of living on the street has clearly taken a toll on her body. The photo booth offered a moment of privacy for Godie, but looking at the images now, we can imagine, just outside the curtain, a bustling station of disinterested commuters. According to Patterson, it’s even possible that the mirror next to the photo booth camera allowed Godie the rare opportunity to see her own face. Perhaps, in these portraits, Godie was discovering herself just as much as she was revealing her various identities to us.
Isaac Kaplan is an Associate Editor at Artsy.
Related Stories