The Secret Language of Jewelry in Women’s Portraits 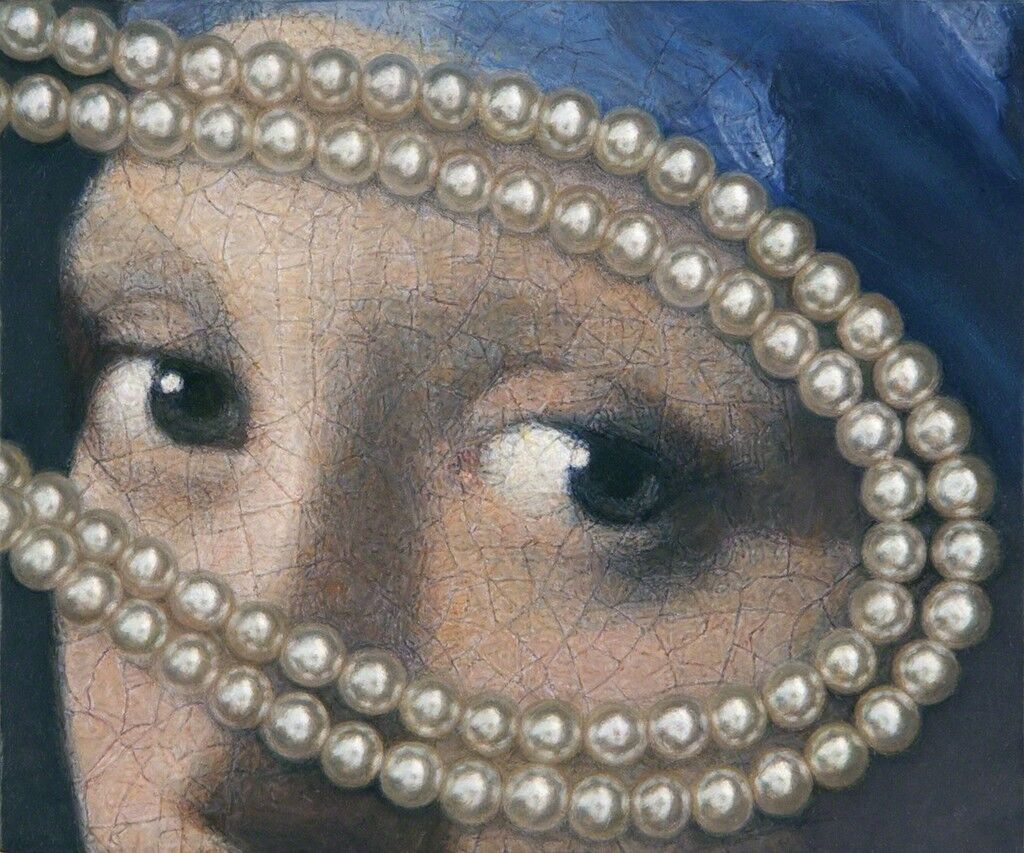 Lucy Mackenzie
Vermeer Eyes with Pearls, 2012
Nancy Hoffman Gallery
Whether you consider opulent jewelry as a frivolous accessory or powerful status symbol, there’s no denying the intoxicating allure of an exquisite arrangement of precious stones. Thousands have flocked to see bulging diamonds, emeralds, and sapphires worn by sanctioned royalty, from Queen Elizabeth’s crown jewels at the Tower of London to Elizabeth Taylor’s collection of baubles that broke auction records at Christie’s in 2011. In their extravagance, these objects could seem outdated or uncouth, but still, jewelry talks. It remains a cogent and complex signifier of wealth and refinement in the 21st century, its aspirational legacy rooted in the history of portraiture.
For centuries, artists have used jewelry to ascribe important attributes to their sitters. A recent panel discussion at the 92nd Street Y, entitled “Jewelry: The Secret Language in Portraits of Power,” elucidated the multiple symbolic and associative functions of jewelry as it is featured in portraits of women, from formidable British queens to the nouveau riche heiresses of the Gilded Age. The panelists encouraged the audience to not only admire the lavish jewels depicted in paintings but to also question their personal and political significance. “We never want you to look at jewelry the same way again,” pronounced moderator Stellene Volandes, the editor-in-chief of Town & Country. Yet it’s equally important, she continued, to notice its absence. 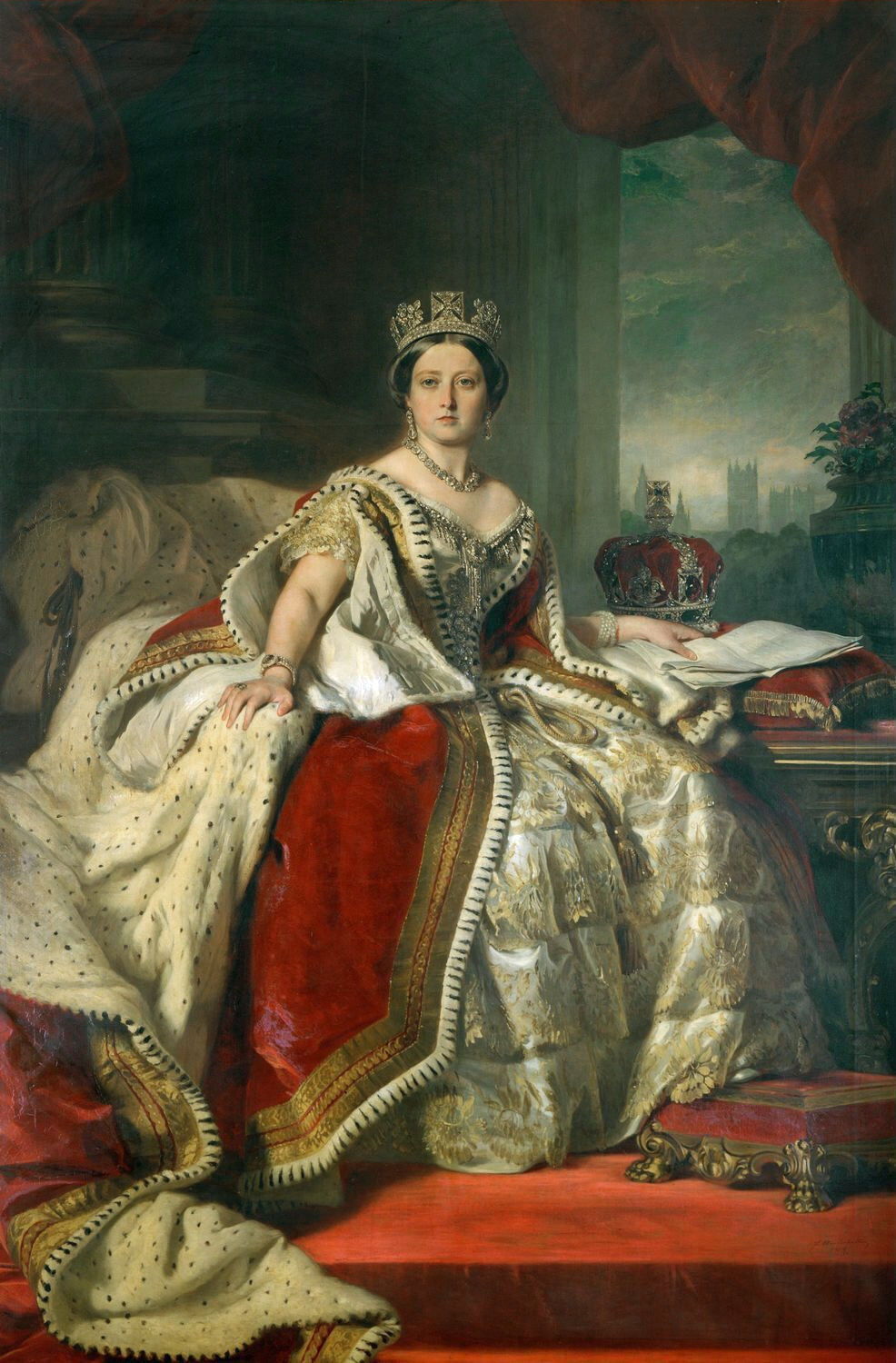 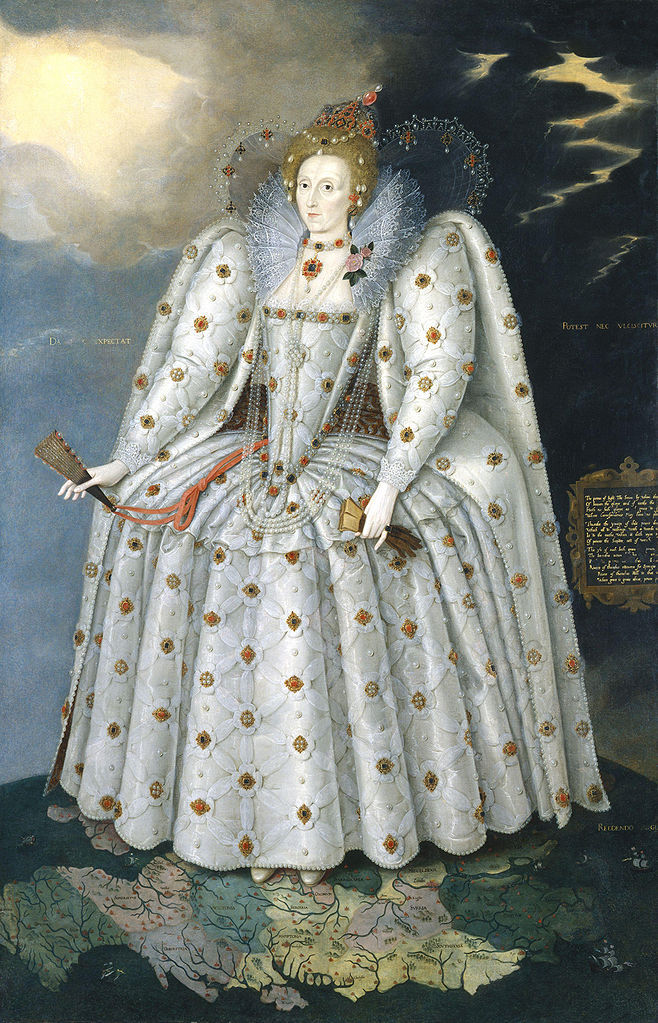 Famous monarchs like Queen Victoria, whose personality and long reign defined the British Empire in the 19th century, strategically used portraiture and jewelry to communicate her absolute authority. In an 1859 likeness attributed to
Franz Xaver Winterhalter
, the 40-year-old queen appears at the height of her powers, wearing a crown that features a shamrock, thistle, and rose to symbolize the United Kingdom’s three states—Ireland, Scotland, and England. Her whopping 161-carat diamond necklace, worn at her coronation, serves as a more straightforward token of her robust wealth.
At the right, Victoria’s coronation crown frames a window overlooking the seat of her power, Buckingham Palace. This not-so-subtle allusion to her dominion is reiterated by the gigantic Stuart Sapphire and Black Prince’s Ruby at the front of the crown, jewels passed down over the centuries in an unbroken line of British rulers.
What could be a cold, monarchical vision of her empire and authority is softened by Victoria’s decision to also don more personal mementos. Jonquil O’Reilly, vice president and head of sale in the
Old Master
paintings department at Christie’s New York, contends that Victoria clearly “understood the sentimental symbolism of jewelry and how it spoke to power.” A prized ring given to her by her beloved husband Albert, who enjoyed designing jewelry for his wife, features the romantic combination of turquoise, symbolizing fidelity; and pearl, a marker of purity. Her bracelet, which features a cameo by Albert, was a gift before their wedding. After he died, Victoria famously wore austere black mourner’s clothes for the rest of her life, but later portraits show that she never took the bracelet off. 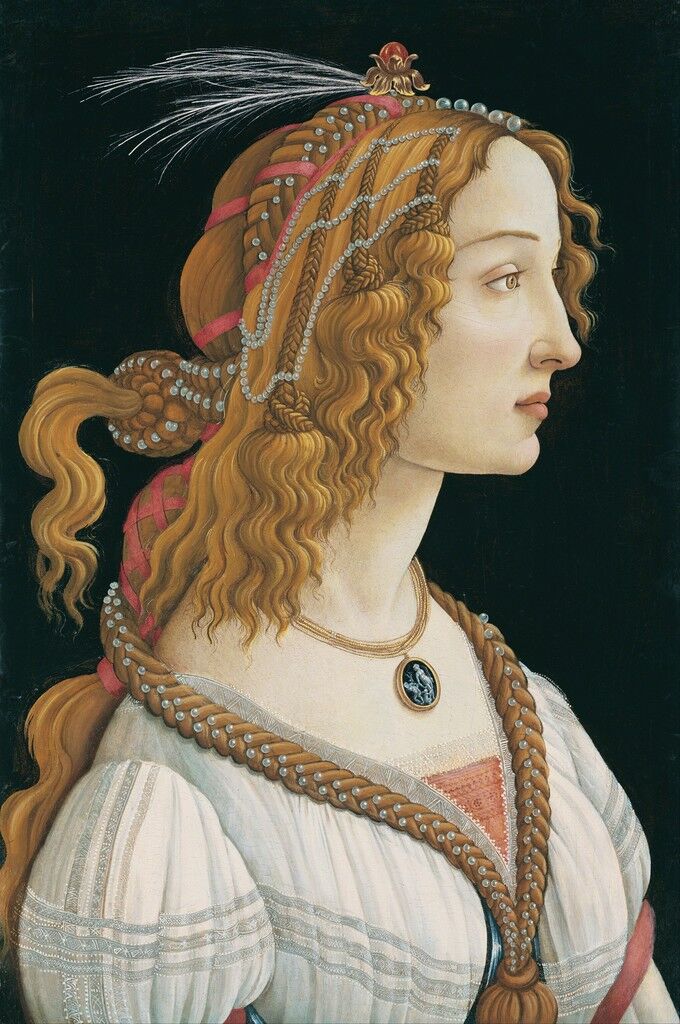 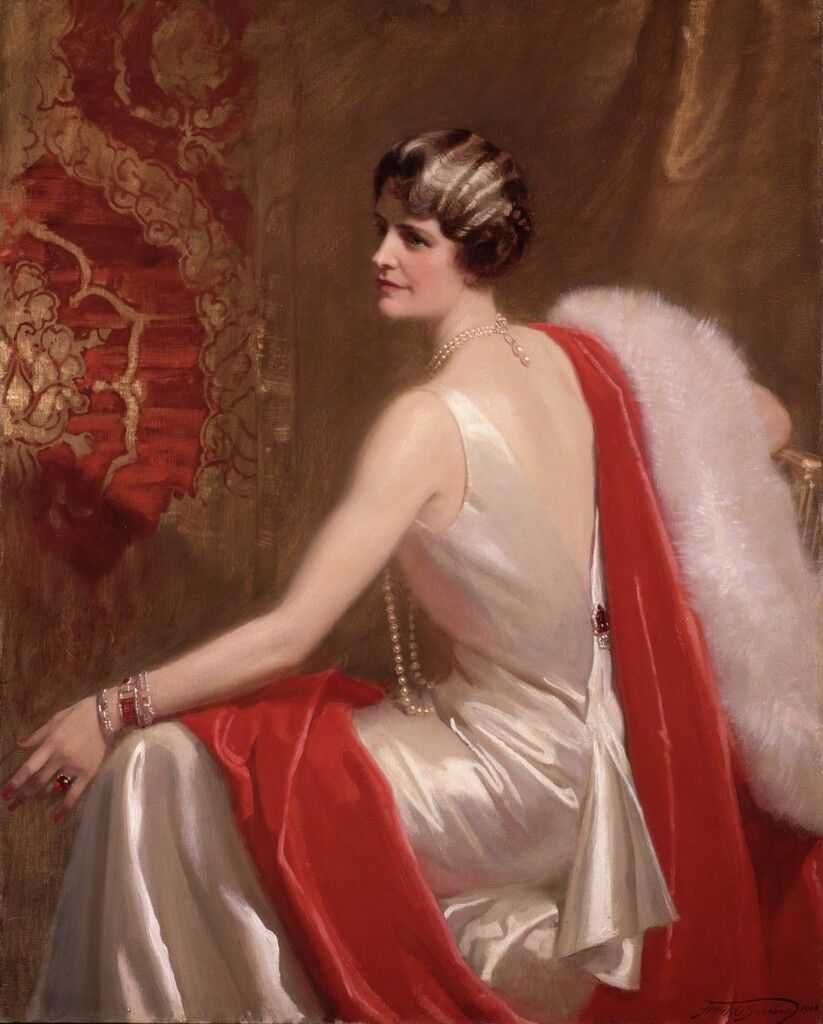 Frank O. Salisbury
Portrait of Marjorie Merriweather Post, 1934
Hillwood Estate, Museum & Gardens
Advertisement
Victoria’s predecessor, on the other hand—the equally influential (but arguably more fashionable) Queen Elizabeth I—“understood the importance of subtlety,” O’Reilly said. Still, the famous Ditchley Portrait, painted by
Marcus Gheeraerts the Younger
in approximately 1592, when the Tudor Queen was almost 60 years old, might not seem all that subtle. Bejeweled from head to toe, Elizabeth appears in a voluminous white gown with magisterial, wide-hipped panels that fill the frame. Not only do egregiously long strands of pearls encircle her from neck to waist, but they also drip from her hair and edge the sleeves and skirt of her massive—and massively expensive—silk gown.
“We often associate her with pearls, which she very much encouraged,” O’Reilly explained. The Virgin Queen mined the symbolism of pearls as reflecting purity, godliness, and the ethereal light of heaven to reinforce her divine right as ruler. The history of pearls is also entrenched in ancient ideas about femininity, appearing in Greco-Roman myths in connection with Venus emerging from the clamshell. Jewelry historian Diana Singer, who is also president of the American Society of Jewelry Historians, noted that pearls, in their ability to reflect light on the face, are the only gems that draw attention to the sitter rather than the precious stone.
Beyond mere vanity, the laborious process of collecting pearls imbued them with a scarce preciousness, an effect highlighted by their large numbers within a single look, like Elizabeth’s here. Despite their ancient origins, it was incredibly difficult to amass a huge quantity of natural pearls in the Queen’s era, Singer said. (In fact, they are no longer on the market—except with vintage pieces—largely replaced by man-made freshwater pearls.) To acquire natural pearls, O’Reilly explained, one would have had to conquer a nation, enslave its people, and force them to dive for pearls, a treacherous undertaking that killed many within days. Thus, the symbol of purity also became a frightening emblem of the unlimited power the monarch had over her subjects. 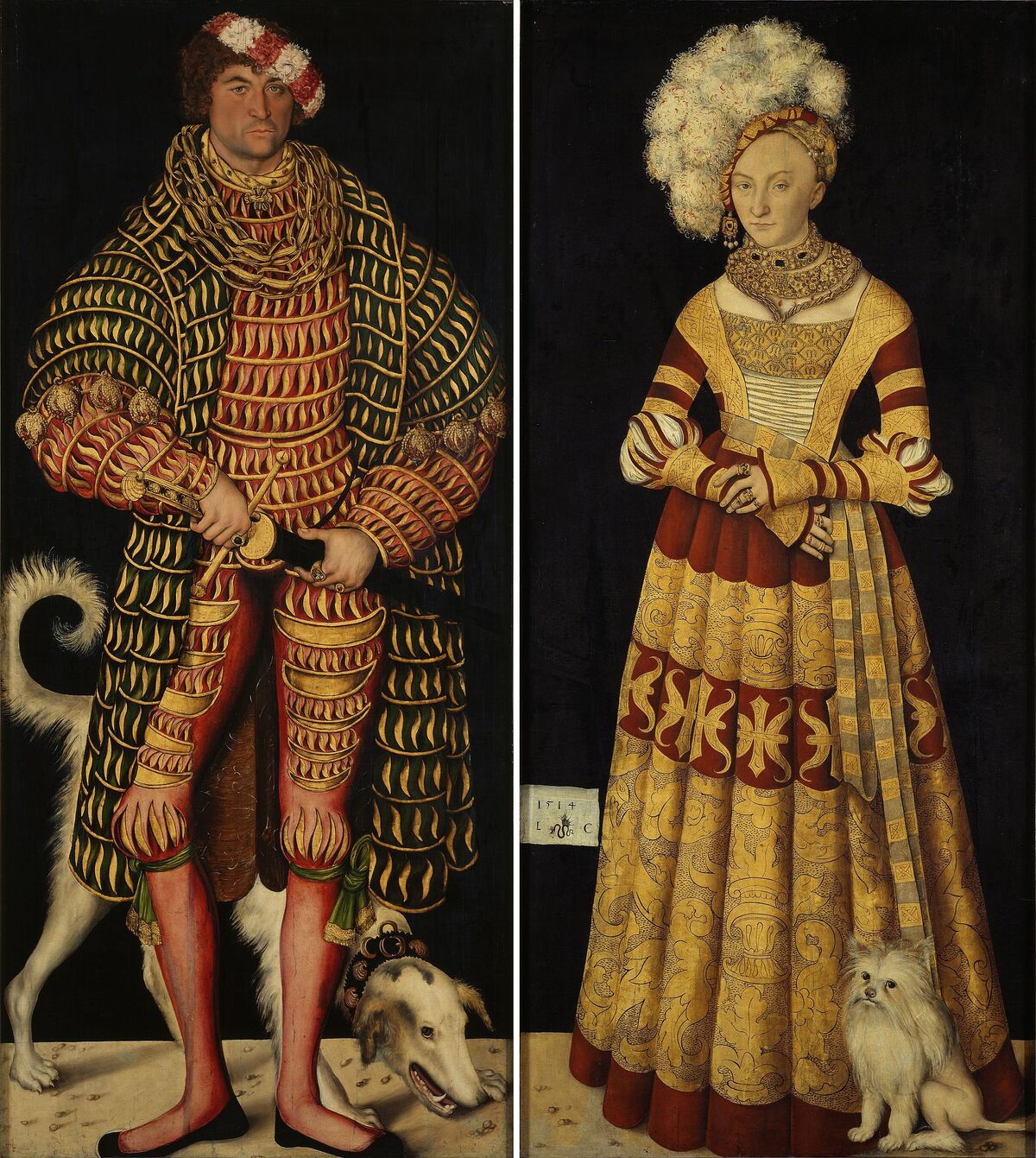 Lucas Cranach the Elder, Portraits of Henry the Pious, Duke of Saxony and his wife Katharina von Mecklenburg, 1514. Image via Wikimedia Commons.

With her gallons of pearls, Elizabeth evinces not only a staggering display of wealth but also her global dominance and autonomy. In the painting, she is shown literally standing on the world, a gesture that restates the strong reach of her empire, which can supply her with any jewel she could ever desire. Yet, O’Reilly noted, often, these sitters wore an excess of jewels that we know they didn’t really have from the household inventories left behind. Either they mixed in fakes, borrowed stones, or had the artist imagine them.
Despite the difficulty of acquiring precious stones (as evidenced by Elizabeth’s studded white gown), in the
Renaissance
, “anywhere opulence could be displayed, it was,” Volandes said. In Elizabeth’s Golden Age, fashionable members of the court also sought to communicate wealth in their clothing. In
Lucas Cranach the Elder
’s 1514 double portrait of Henry IV of Saxony and Catherine of Mecklenburg, gold silk and thin strips of actual metal were woven together to create the sitters’ “insanely heavy” textiles, O’Reilly said, which would “affect the way you move and carry yourself.”
The gold chains around Henry’s neck, she observed, were often given as gifts, and were worn prominently in portraits to show the subject’s favored position at court. This kind of power-play portraiture continued for centuries; the sitters’ prestige could also be gleaned from the potency of a gemstone’s color or a special piece’s provenance. For a long time, only royalty and aristocrats had the pleasure of possessing such treasures. But 300 years later, in the late 19th century, there was a “monumental shift in the expression of power and wealth,” Volandes said. 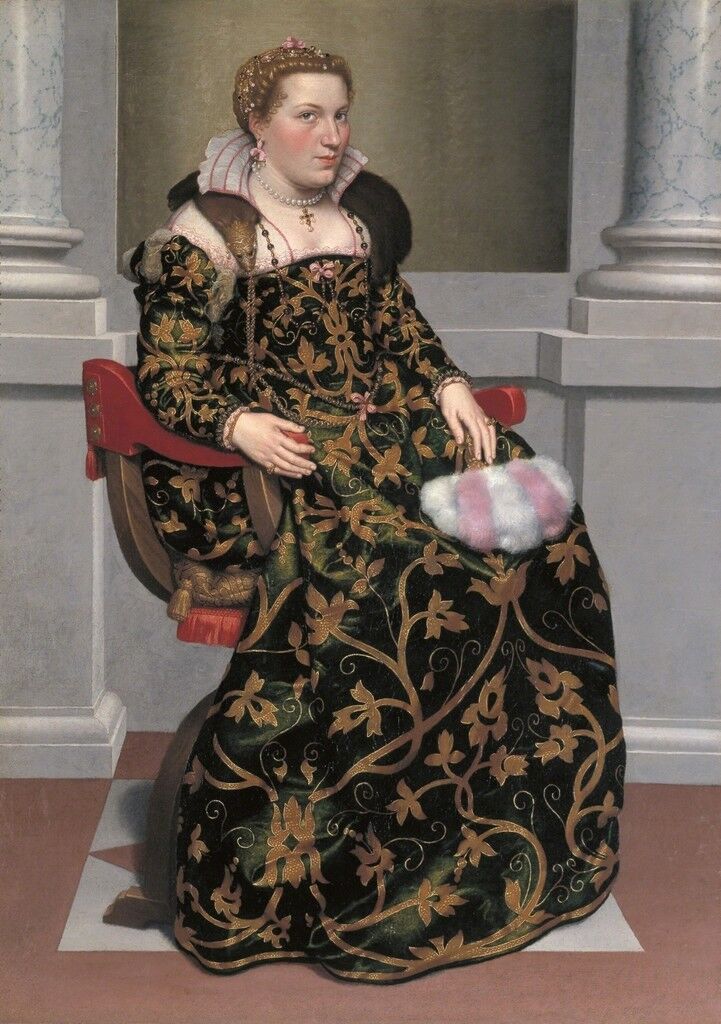 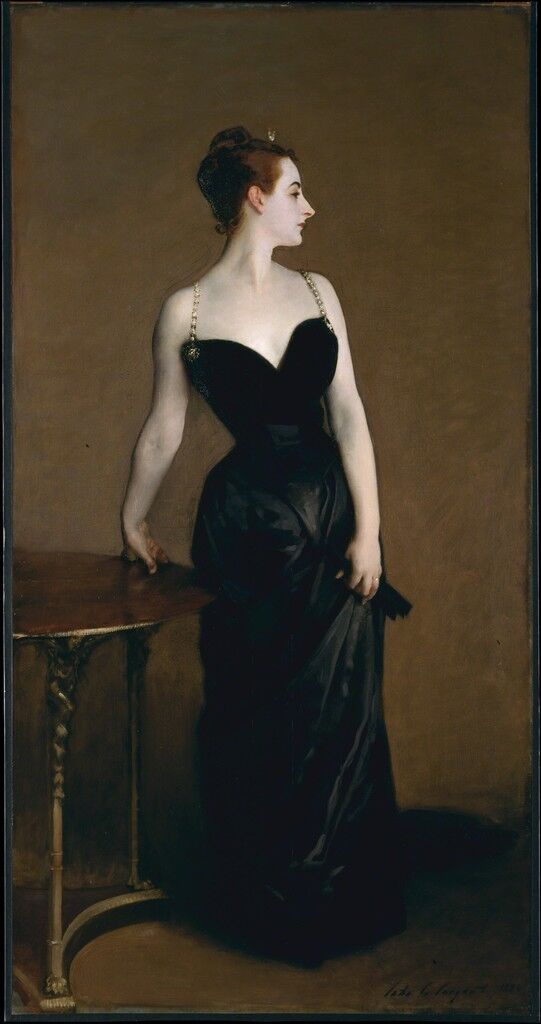 John Singer Sargent
Madame X (Madame Pierre Gautreau), 1883–1884
The Metropolitan Museum of Art
An emerging class of wealthy merchants and industrialists arose in Europe and the United States. Empowered—or chained, if you’re an Edith Wharton fan—by their newfound social mobility, the bourgeoisie became obsessively concerned with clearly communicating their good taste, the novel new approach to evaluating class. The American expatriate
John Singer Sargent
became the author of these new aristocrats, and his portraits reflect an evolving relationship between the upper classes and jewelry.
Jewelry became accessible as studios like
Cartier
,
Tiffany
, and
Lalique
cropped up to cater to the materialistic, moneyed class. Even the process to manufacture cultured pearls had been perfected by the 1920s. Though still expensive, the pearl market was so heavily democratized that by the 1950s, the stones had become the quintessential symbol of ladylike fashion. At the same time, jewelry shifted from a marker of wealth and power to a signifier of refined taste. Old Money frantically sought to differentiate itself from New Money; in an ironic twist, the fashionable marker of wealth at the turn of the century became a subdued, subtle application of jewelry that would suggest confidence in one’s wealth and social status.
Compare, for instance, Sargent’s portraits of Lady Agnew of Lochnaw (1892) and Mrs. Carl Meyer and her Children (1897). The young wife of a wealthy barrister, Lady Agnew used this portrait to launch herself as a society beauty. She confronts the viewer with a coy but direct gaze, and her informal pose and flowing lilac dress create the impression of a pretty flower. Even though she wears only a simple pendant barely delineated by Sargent, as well as a gold bracelet, the sitter exudes a fashionable—and distinctly wealthy—disposition. “She whispers money,” Volandes said. 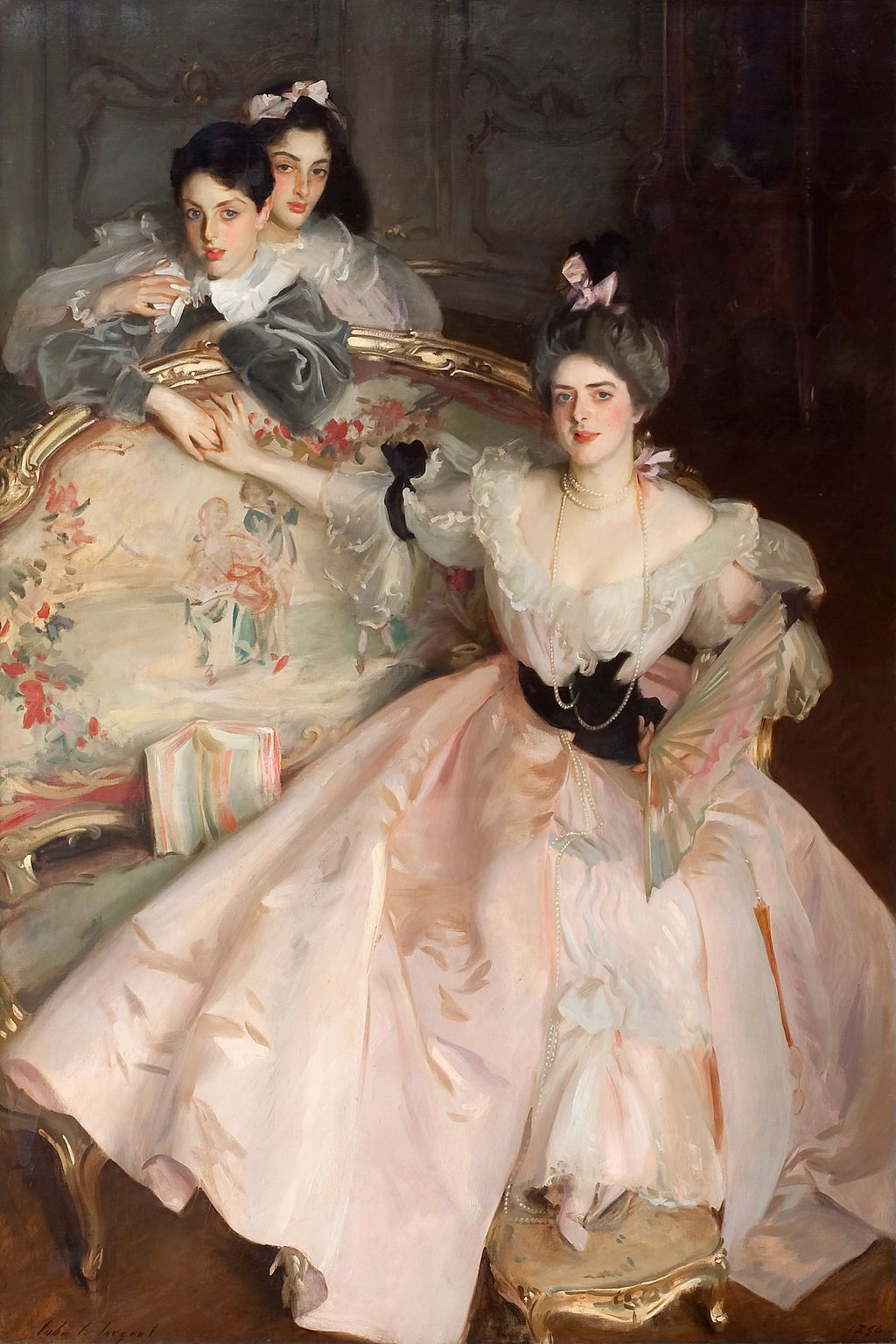 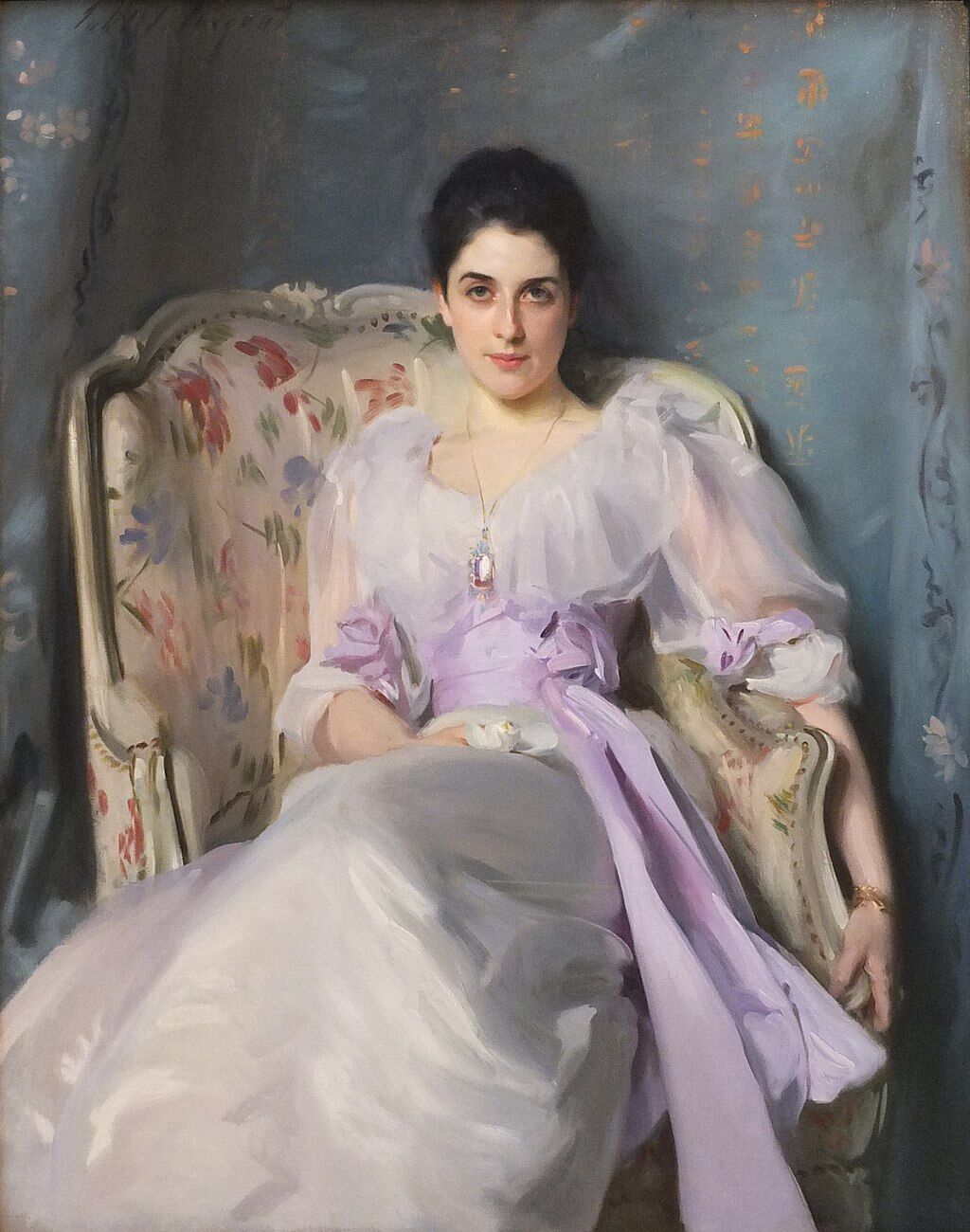 Mrs. Meyer, on the other hand, had more speed bumps on her way to social acceptance. As the Jewish wife of a prominent Jewish banker, she exemplified the Gilded Age ethos of more-is-more luxury. In contrast to Agnew, Meyer appears like a cream puff in a French-style silk taffeta gown. Her necklace apes Queen Elizabeth’s, the long strand of pearls pooling at her toes.
The over-the-top opulence of the composition, as well as it’s dramatic, tilted perspective, marked a departure for the usually elegant Sargent. The unapologetic wealth here reflects the status and acceptance Adèle Meyer sought in society but also reiterates anti-Semitic stereotypes about the perceived gaudiness of New Money Jews, whose extravagance to many WASPs signaled an unfamiliarity with wealth. “I don’t want to say it’s desperate,” Stephanie L. Herdrich, assistant curator of American painting and sculpture at the Metropolitan Museum of Art, chimed in, “but maybe a little.” Oh, the fickle satire of changing tastes!
Julia Fiore
Related Stories 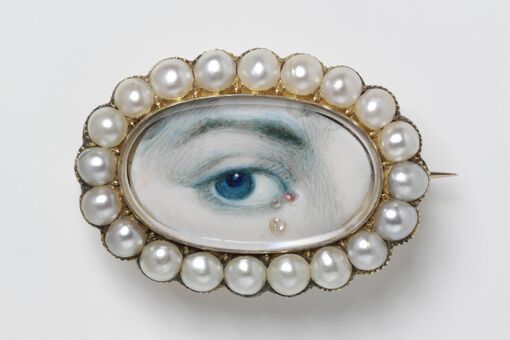 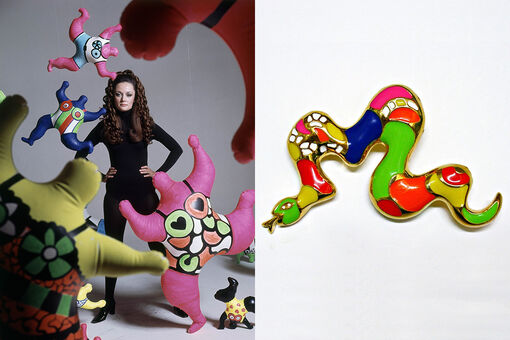