How Artistry, Bureaucracy, and Lobbying Combined to Create a $3.5 Million Public Sculpture in the Desert 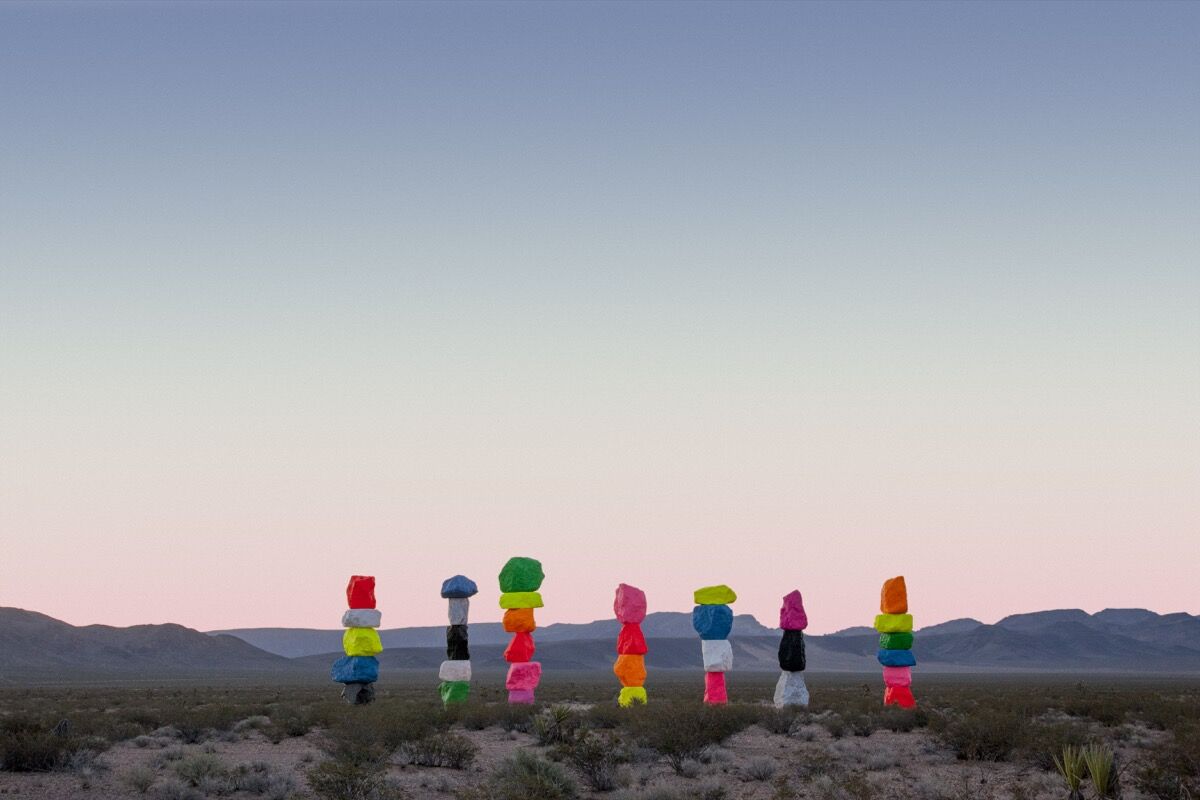 It took four years and $3.5 million to build, but today
Ugo Rondinone
’s Seven Magic Mountains stands majestically just a short drive south from the Las Vegas strip. The brightly colored sculpture has been a marked success, drawing roughly a thousand visitors each day to a serene spot of desert they would not otherwise have reason to see.
The work’s site, near Jean Dry Lake, puts Rondinone’s pillars in physical proximity to legendary pieces of
land art
, like
Michael Heizer
’s now-vanished Rift 1. But a lot has changed since Heizer carved zigzagging trenches through the lakebed in 1968. If he tried to create the piece again today, well, he would probably get a call from the federal government.
That’s because Jean Dry Lake and the spot near it where Rondinone opted to place his sculpture are on federally owned land, under the jurisdiction of the Bureau of Land Management. Accustomed to evaluating multi-acre solar arrays and communication projects, the BLM is staffed with ecologists, geologists, biologists, and administrators.
Absent from the line-up? Art historians. The BLM’s various forms don’t have a checkbox for public art, let alone Rondinone’s seven neon stacks.
The result was that the creation of Seven Magic Mountains required a herculean amount of bureaucratic artistry on both sides, to bridge the divide between two unfamiliar worlds. And the piece is a singular example of the challenges—often invisible in the final work—confronting those who help create public art. 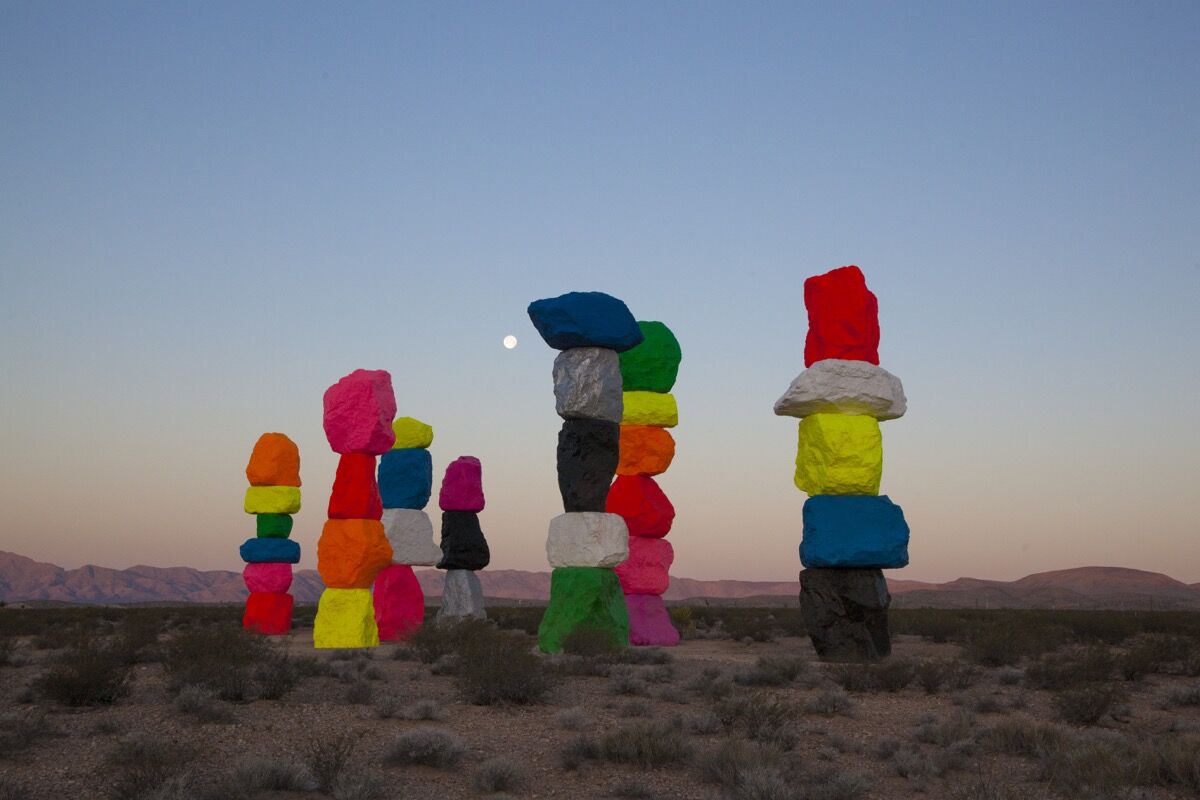 Along with hiring a consultant to shepherd the sculpture through the BLM’s permitting process, the Nevada Museum of Art and Art Production Fund, which co-produced the piece, lobbied to change the state’s liability law to ensure the work could be constructed. All told, overcoming regulations at the federal, state, and local level comprised nearly 20% of the project’s budget.

Anything other than Artwork

The BLM’s permit process is theoretically straightforward: You tell them what you want to do, and explain how you’re going to build what you want to build. Importantly, you detail what impact it could have on the environment in accordance with the 1969 National Environmental Policy Act (NEPA), with the length and thoroughness of that impact report varying based on the project and where it is located.
Unfortunately, that permitting process was designed for “anything other than artwork,” said Sylvia Harrison, the environmental and natural resource lawyer who worked with the museum on the project pro bono.
Sandra Fairchild, the environmental consultant brought on as the sculpture’s project manager, found that out the hard way. Fairchild is used to working on transmission lines, solar facilities, natural gas operations, “utility-scale type of infrastructure,” she said, such as a solar project that involved scraping and clearing 2,500 acres of federal land and took the BLM two years to permit.
By comparison, Rondinone’s sculpture is a non-invasive work using three acres of federal land. So when Fairchild got the call about getting the project through the BLM in March of 2013, while vacationing on a Hawaiian beach, she thought the permitting and approval would take “no time at all.”
Instead, it took roughly three years. Why? The BLM could rely on executive orders and pages of regulations that addressed the construction of solar arrays. But they had little guidance on how to address the proposal for Seven Magic Mountains. 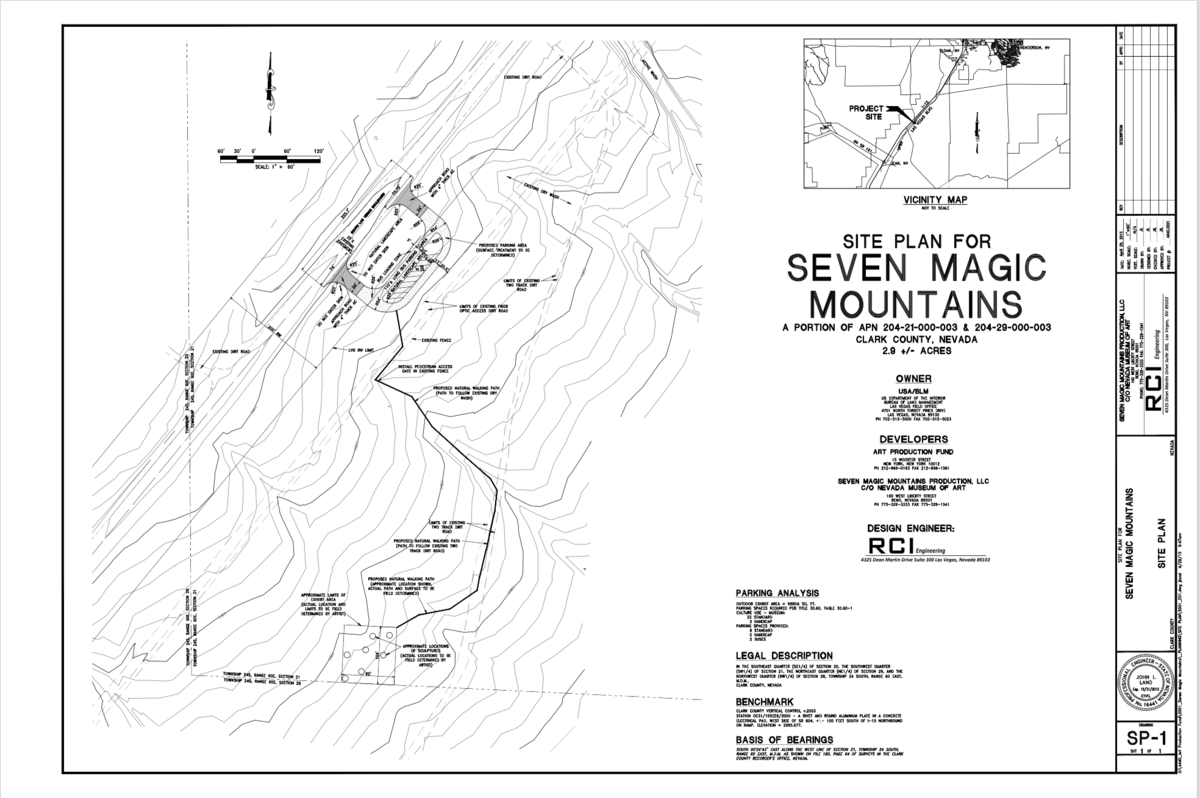 Advertisement
In addition, Rondinone’s conceptual vision and design shifted partway through, from an initial proposal involving what were essentially mounds of pebbles, to the towering sculptures standing there today. Such conceptual shifts are far from rare, and usually not impossible to accommodate within the confines of a gallery space. But the revised proposal for Seven Magic Mountains required resubmitting the new design to the BLM, adding time to the process.
“In hindsight, if I had known we’d have so many struggles, I’d have said ‘just do it and ask for forgiveness later,’” Fairchild said with a laugh.

Art Without the Visual Impact

But the clash between the bureaucratic process and artistic vision was most evident in the visual impact section of the roughly 50-page environmental assessment Fairchild compiled.
Part of that assessment included creating a visual simulation depicting the work actually in the environment. Also part of the report were five “key observation point” worksheets, standard forms to be filled out detailing the work, where it would be located, and the contrast between the sculpture and the landscape from the “observation point” (like a road or a trail). The costs of producing the simulation and the worksheets—which required a separate consultant and the input of the BLM—cost around $15,000.
The BLM generally operates under the assumption that a project’s visual impact should be minimal, or placed in a location with less pleasurable natural aesthetic qualities to lessen the contrast. But art is supposed to have a visual impact (“The artwork is intended to be a setting of contrasts,” the environmental assessment reads.) Rondinone had chosen the historic spot near Jean Dry Lake with the McCullough Mountains in the background, conceiving of the work in relation to the landscape. Fairchild pushed back on the BLM’s the request for more simulations by successfully explaining why
site-specific art
is just that. 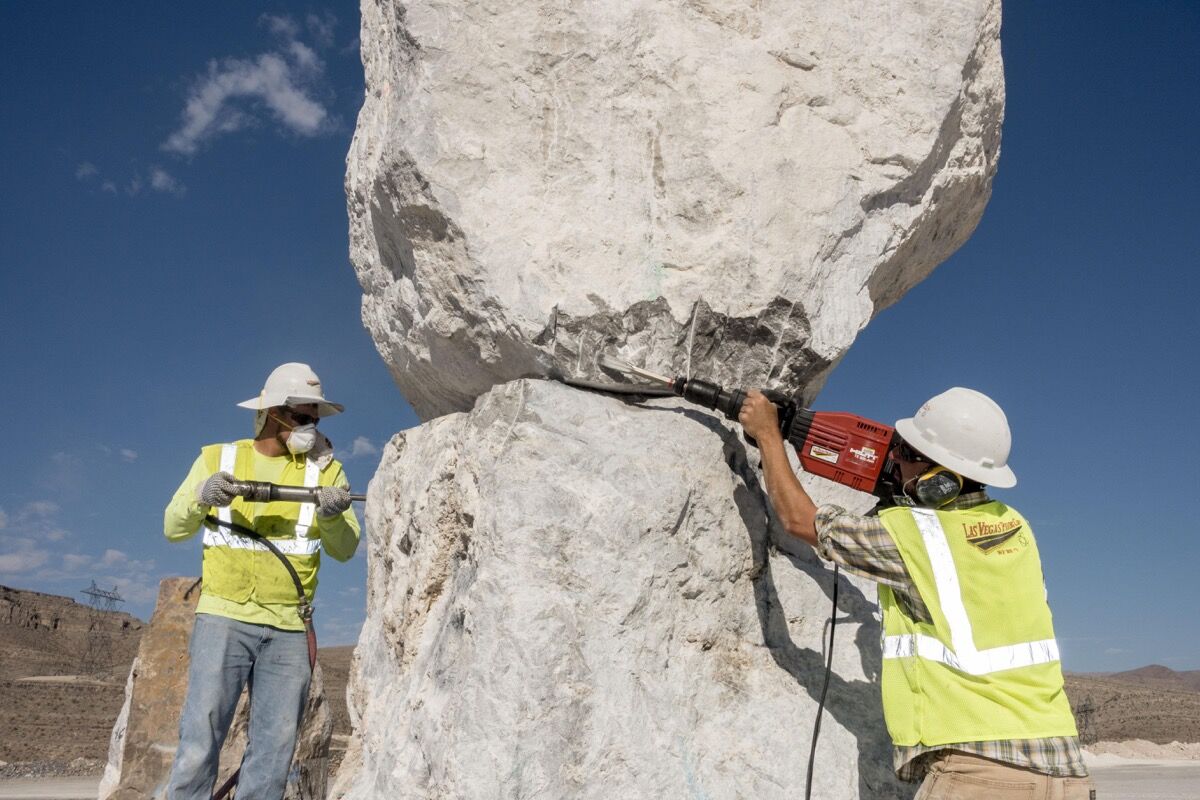 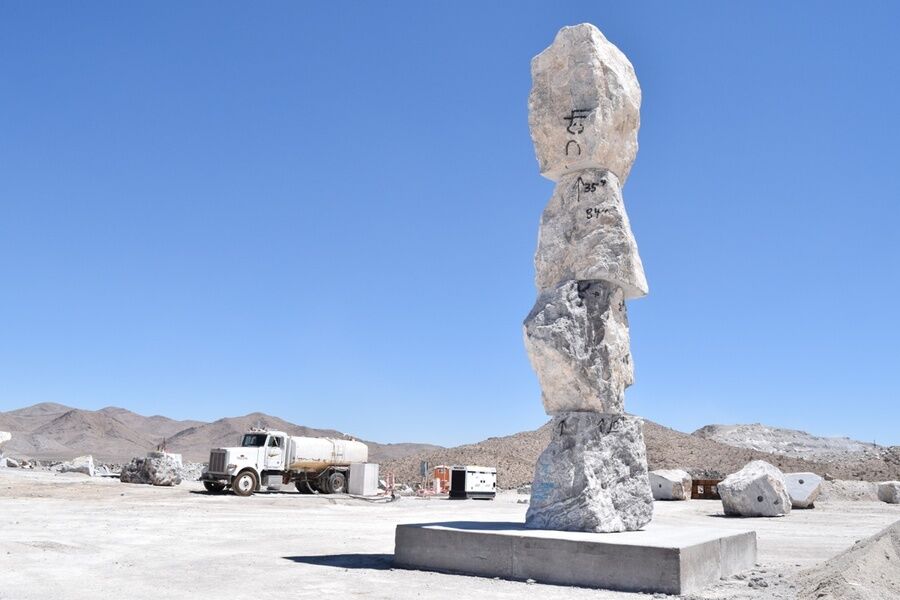 “It was a collision of two worlds: of an artist’s conceptual philosophy and the more linear brass tacks of an application process,” said Kirsten Cannon, a public affairs specialist at the BLM. “It took some time to get to that sweet spot.”
Eventually, along with a permit allowing the museum to host events at the sculpture, the BLM granted a “site” type right-of-way permit—normally a 30-year permit that authorizes the use of public land for specific projects, such as communication towers and the like—for three years.

Harrison also had to consider the artwork’s potential legal liability. Rondinone’s sculptures—which were originally conceived of as piles of brightly colored pebbles—could pose a financial risk to the artist, museum, and even the fabricator of the work if they were deemed an “attractive nuisance,” meaning a potential hazard that invites engagement from people unaware of the risk (such as, say, a swimming pool without a fence around it).
In most states, property owners have different duties to people they invite onto their land versus those who sneak onto it illegally. But a 1994 ruling by the Nevada Supreme Court erased those distinctions, greatly increasing the burden on landowners and potentially further exposing the Nevada Museum and Rondinone, among others involved in the project, to liability should someone hurt themselves while engaging with the works.
As Rondinone’s sculpture was coming together in 2013, the Nevada state legislature was looking to reverse the court’s decision. Harrison spotted an opportunity to piggyback on their efforts, so she could ensure the museum wouldn’t be liable for anyone hurting themselves while “misusing or abusing,” as she put it, the sculptures.
“This was something that was so far out there for us,” said Casey Fremont, the executive director of Art Production Fund. “How could we assume responsibility for someone’s irresponsible behavior?” 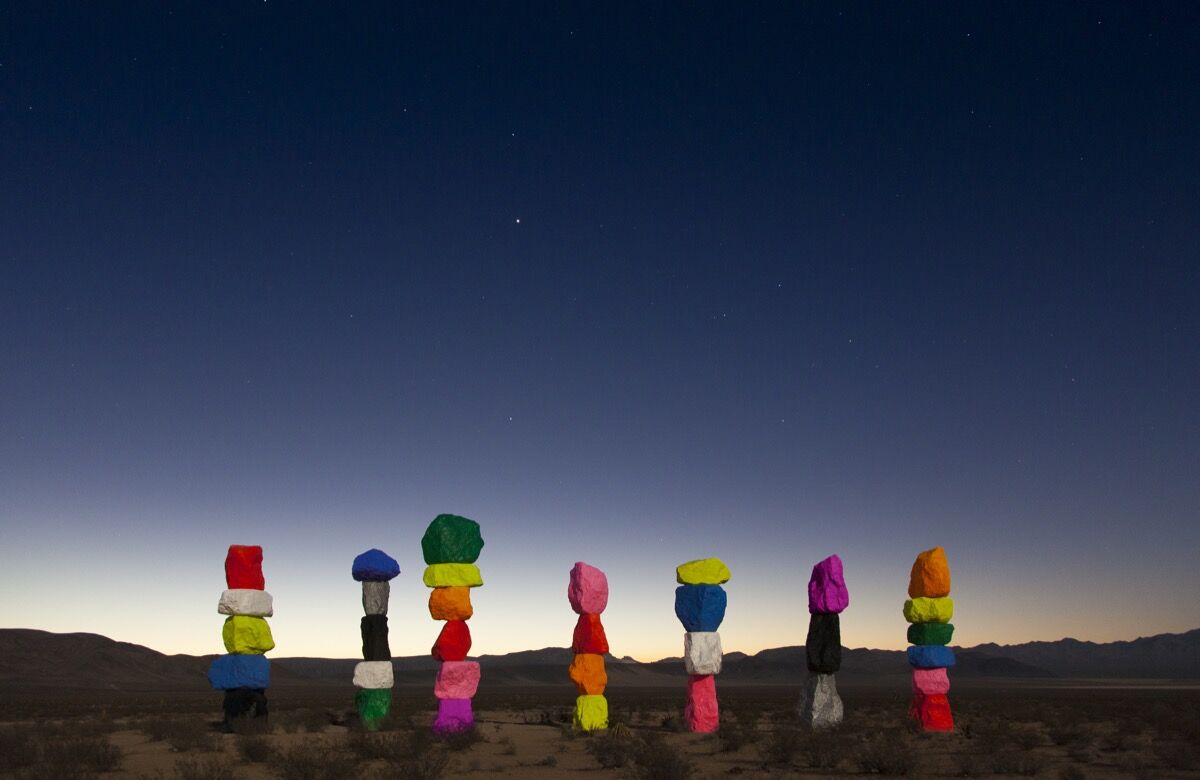 Harrison wrote a law that carved out a liability exemption for public art. Sponsored by former Republican State Senator Greg Brower, the legislation moved through the statehouse with little resistance and required only minor tweaks.
And so today, because of Seven Magic Mountains, NRS 41.517 is on the books—the only such public-art carve-out in the country Harrison said her research found. With a few exceptions, it shields those who create, sponsor, or own public art—defined as freely accessible works that cost or are valued above $25,000—from liability in lawsuits brought by those who ignore warnings and hurt themselves.
Fremont, who has worked in many other states to create art, agreed this was the first such law she’d seen.
Like so much else, “that was unique to this piece,” she said.
Isaac Kaplan is an Associate Editor at Artsy.