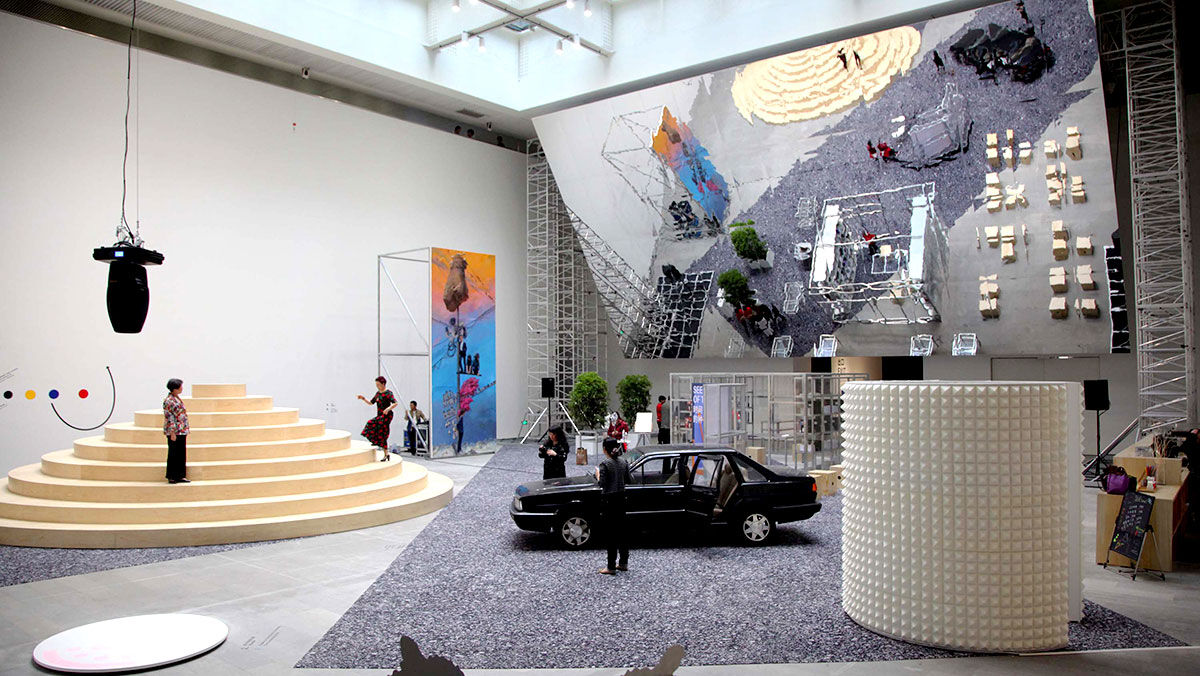 In an exhibition currently open in Shanghai, visitors can take a tour through the city as it might be 100 years from now—largely underwater.
Whales and turtles glide between the city’s signature skyscrapers. Elsewhere, maps show redrawn territories, plans outline climate change contingencies, and visitors are invited to discover a phantom flower on the verge of extinction.
The second phase of the ambitious, wide-reaching—and to its detractors at least, decidedly disjointed—Shanghai Project, continues its approach to workshopping ideas for the city’s future. This iteration, which comes in the form of a sprawling exhibition, is titled “Seeds of Time.”
“It is too ambitious,” said Dr. Yongwoo Lee, the outgoing Executive Director of Himalayas Museum and co-Artistic Director of the Shanghai Project. (The project’s other co-Artistic Director is the renowned curator Hans Ulrich Obrist.)
But Lee is unapologetic about the project’s lofty ambitions. In fact, he’s downright enthusiastic. “From the beginning,” he said, “we announced that Shanghai Project would be a multidisciplinary ideas platform, we’re not going to show a very ‘organized’ event. This way, people can come together to discuss.” 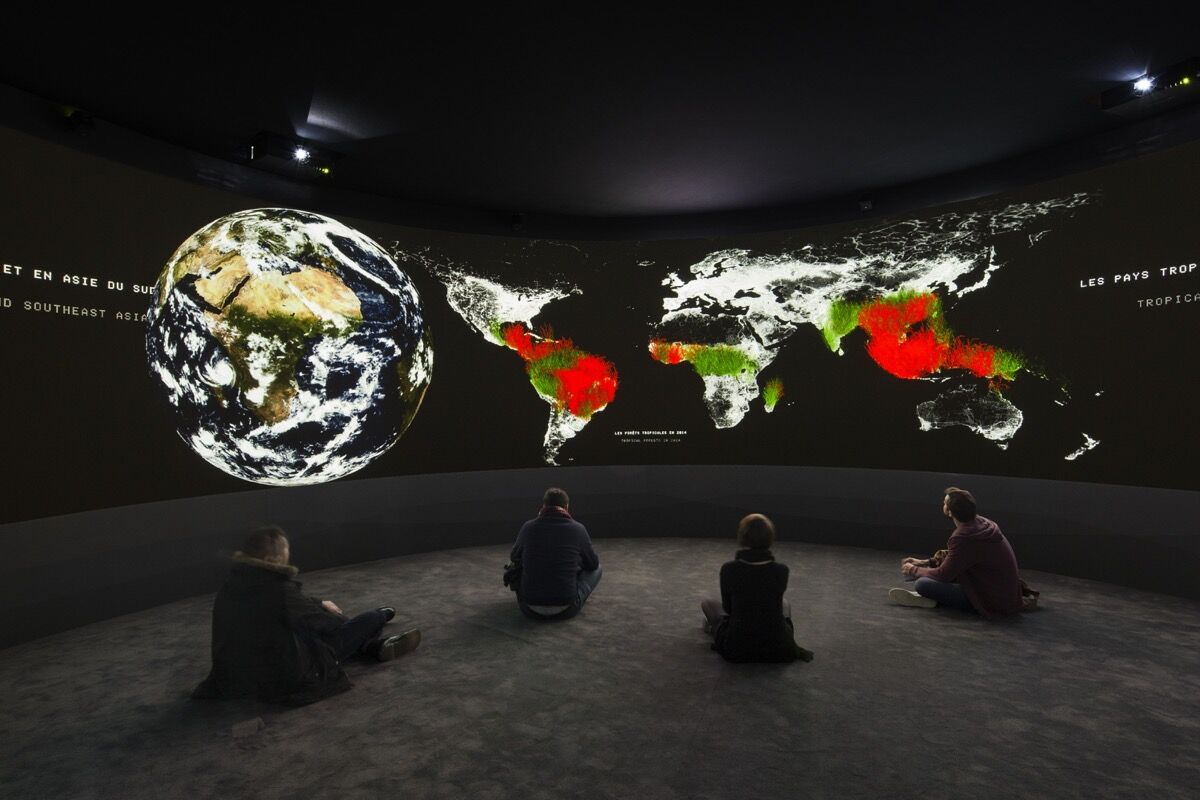 Since the concept’s unveiling back in 2015, Shanghai Project’s evolution can be best described as meandering. Originally announced as a “hybridized international arts festival” and “a cultural forum,” the initiative is organized by Shanghai Himalayas Museum and was initially conceived as a biennial.
Following reports of roadblocks both in its funding and administration, the organizers announced a new format for the project in the summer of 2016. The initiative’s debut chapter was to be split into two phases, eight months apart.
The first launched in September 2016 as a community-based offsite program of workshops, lectures, and events, including
Sou Fujimoto
’s dramatic scaffolded pavilion outside Shanghai Himalayas Center and
Liu Yi
’s Children’s Pavilion in the city’s vast Century Park.
At Himalayas’s satellite space in the picturesque town of Zhujiajiao, a group exhibition, “Qidian,” was organized in partnership with 89plus, a research project co-founded by Obrist. These multifarious elements linked to an overarching theme dubbed “Envision 2116,” which imagined the city of Shanghai 100 years from now, and addressed issues of sustainability, as well as wide-reaching social and cultural topics.
The second phase of Shanghai Project launched at the end of April this year, at the Himalayas Museum, which is housed alongside a shopping mall, luxury hotel, and theater, within
Arata Isozaki
’s landmark architecture.
“It’s not exactly a visual art-focused event, but a much more hybridized genre,” Lee explained, outlining the initiative’s current incarnation, the group exhibition “Seeds of Time.” 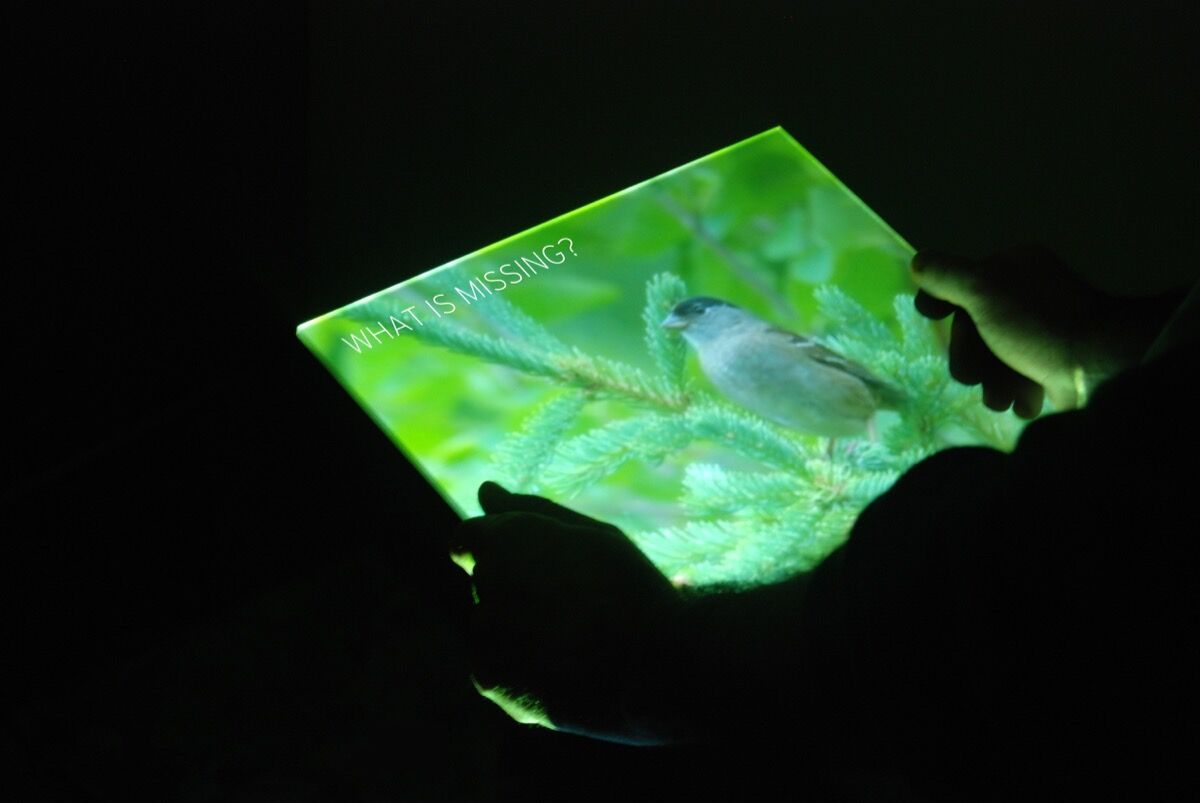 Advertisement
The show takes its title and themes from Sandy McLeod’s 2013 documentary, Seeds of Time. The film centers on American agriculturist Cary Fowler, whose biological archive, the Svalbard Global Seed Vault, is buried deep in the permafrost of the Norwegian Arctic. It’s compelling viewing that does the urgency of Fowler’s work justice: cultivating crop diversity, and building the world’s seed stores in anticipation of the devastating effects of global warming.
The documentary has inspired five focus areas across the exhibition, which are led by so-called “Root Researchers”—among them French anthropologist Bruno Latour and Zhang Haimeng, a managing partner at McKinsey & Company. Underlining the multidisciplinary nature of the show, all of the artists are similarly termed “researchers.”
These participants include the architecture studio
Diller Scofidio + Renfro
, whose remarkable EXIT was commissioned by the Fondation Cartier in 2008. It’s a dizzying digital infographic comprising data, maps, and stats sourced from over 100 sources on the subject of migration, deforestation, global warming, and urbanization.
Also illustrative of the show’s strong leaning toward new media is
Maya Lin
’s engaging What is Missing? The Empty Room (2009). A series of projected films viewable on handheld perspex panels, it forces close engagement with her subject: extinction.
Taking an alternative but similarly captivating approach is Miriam Simun’s sensory performance, Agalinis Dreams (2014–ongoing). It consists of an introduction to Agalinis acuta, the only federally protected, endangered plant species in New York State. (In 2008, it was discovered that the bloom had been erroneously classified due to a taxonomical error, making the “acuta” something of a phantom.)
Lab-coat-clad performers recite an ode to the plant before inviting participants to don a bug-like “smell headset” and sip a cocktail infused with the flower’s scent—which is almost imperceptible to humans. 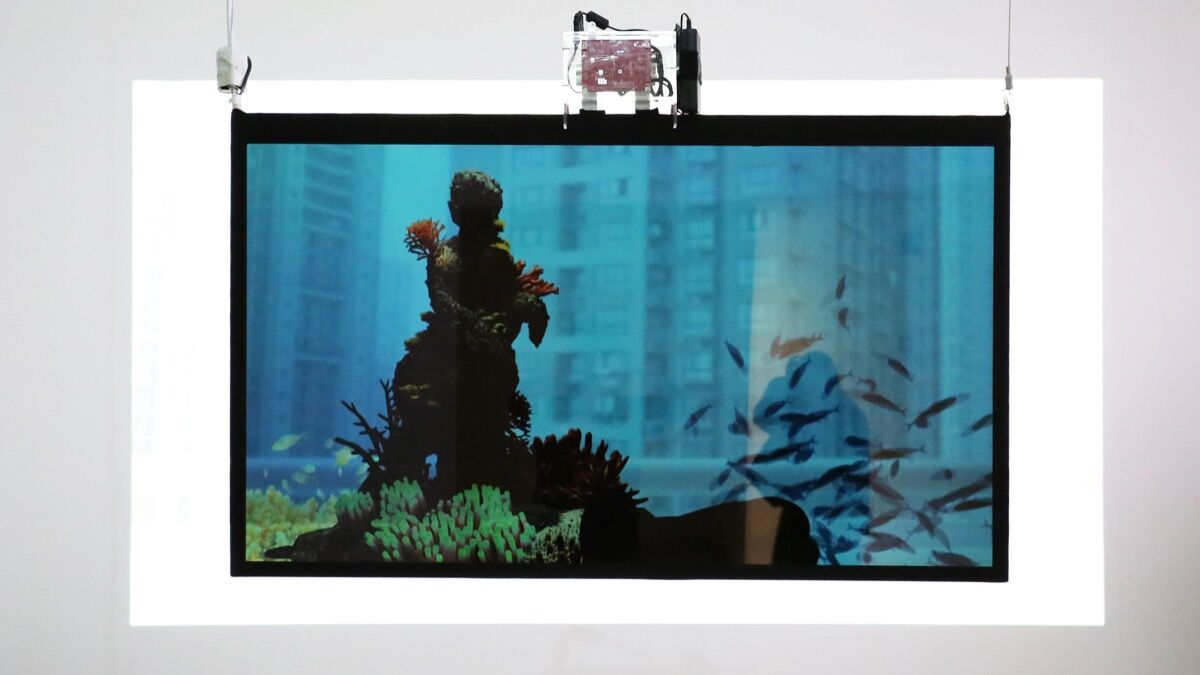 Around a third of the works on display are by Chinese artists. They include “Root Researcher”
Qiu Anxiong
, who visualizes the Shanghai skyline 100 years from now, when climate scientists predict that on our current trajectory, some 76 percent of the city’s metropolitan area will be underwater.
Blockbuster international names in the show include
Olafur Eliasson
, with his award-winning solar device Little Sun,
Yoko Ono
, and the late
Gustav Metzger
.
Ultimately, “Seeds of Time,” which is an engaging and informative exhibition, shows that the issues at stake in Shanghai are not exclusive to the city, but shared by all corners of the globe. But where exactly it will go from here—as it packages an exhibition into a broader project whose parameters, structure, and trajectory remain undefined—is hard to tell.
Dr. Lee rejects suggestions that the reformatting of Shanghai Project’s first chapter into two phases across two calendar years has negatively impacted its momentum. Rather, he says, the structure helped develop and acclimatize an audience unfamiliar with public participatory cultural events.
A secondary outcome that is particularly pertinent to China, Lee suggested, is the way in which this project is cultivating a shift in attitudes toward the public role of museums. “[Audiences] find that this is very much an active place where people can engage together in the name of art and culture,” he said. “Shanghai Project teaches them about a broader context than exhibitions. It’s an urgent call to action.” 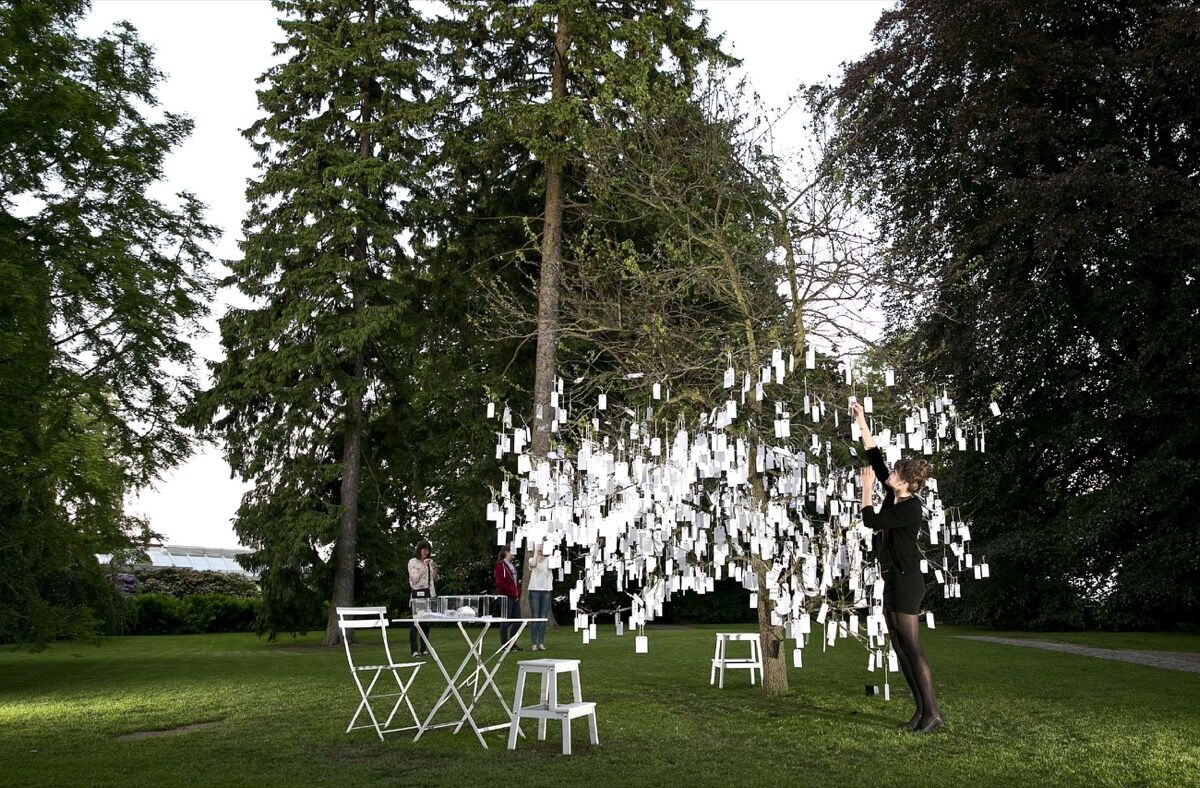 In keeping with the apparently organic course taken by Shanghai Project, there are currently no concrete proposals for future chapters.
“We haven’t decided yet,” Lee explained. “First of all, we are going to listen to the feedback of the citizens and the general public. Secondly, I am going to make another roundtable with our advisory committee members.”
He revealed that they are considering September 2018 for the project’s next installment, however. “It’s a good season,” he said. “The Shanghai sky is very blue in September!”
In a city plagued by air pollution, and where the daily struggle of an undocumented minority of migrant workers is regularly airbrushed from an otherwise glossy appearance, “Seeds of Time” matters. How exactly  the exhibition will inform and steer the wider Shanghai Project, however, remains to be seen.
Frances Arnold
Related Stories