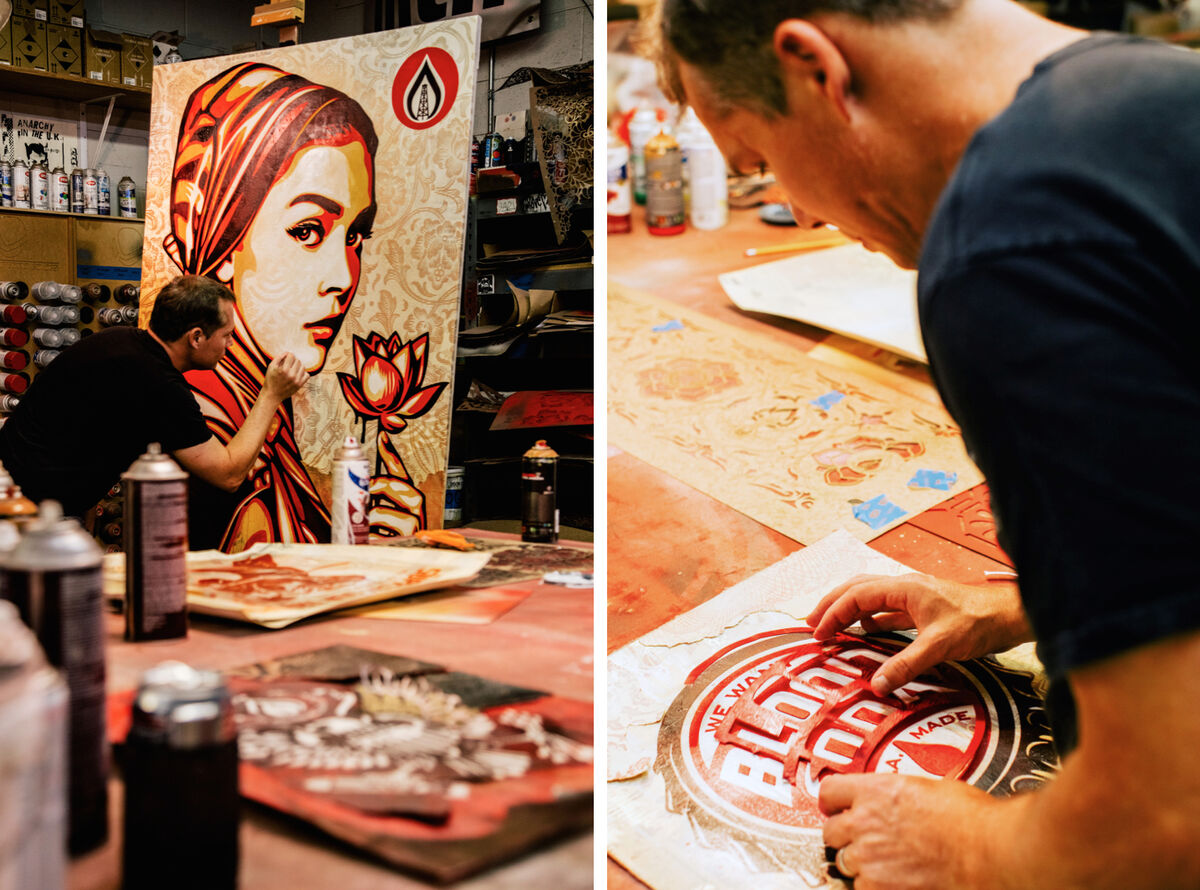 With the 2016 American presidential campaign already heating up, one might expect
Shepard Fairey
—forever recalled as the author behind Barack Obama’s iconic 2008 campaign poster—to mount another political offensive. But his show at Jacob Lewis Gallery, “On Our Hands,” presents the artist anew, with works focused instead on climate change. The paintings on view confront political power and its bedfellows of corruption, manipulation, and apathy. On the eve of Fairey’s exhibition, which coincides with a show at Pace Prints and a new 140-foot-wide public mural in Jersey City (a collaboration with Mana Contemporary), Artsy spoke with this champion of independent expression.

Artsy: Political corruption, apathy towards the environment, and corporate influence are among the concerns driving these paintings. Is there a specific situation or issue that is especially concerning to you?
SF: Climate change and lack of a response to it is probably the thing that concerns me most. Ninety-nine percent of the scientific community agrees that it’s a huge threat to the planet, but very little is being done about it. Imagine if 99% of the intelligence community said that a certain political faction posed a huge threat to the planet—do you think nothing would be done about it?
One of the causes of political inaction on climate change is campaign finance structure. The fossil fuel industry has a huge amount of power in politics. A lot of policies that cater to corporations and ignore average people stem from the legal bribery that happens under current campaign finance policy.
It is not always easy to make art about these complex issues—often insidious and not often sexy—but I enjoy the challenge of making images that draw people into a conversation they might not otherwise have. 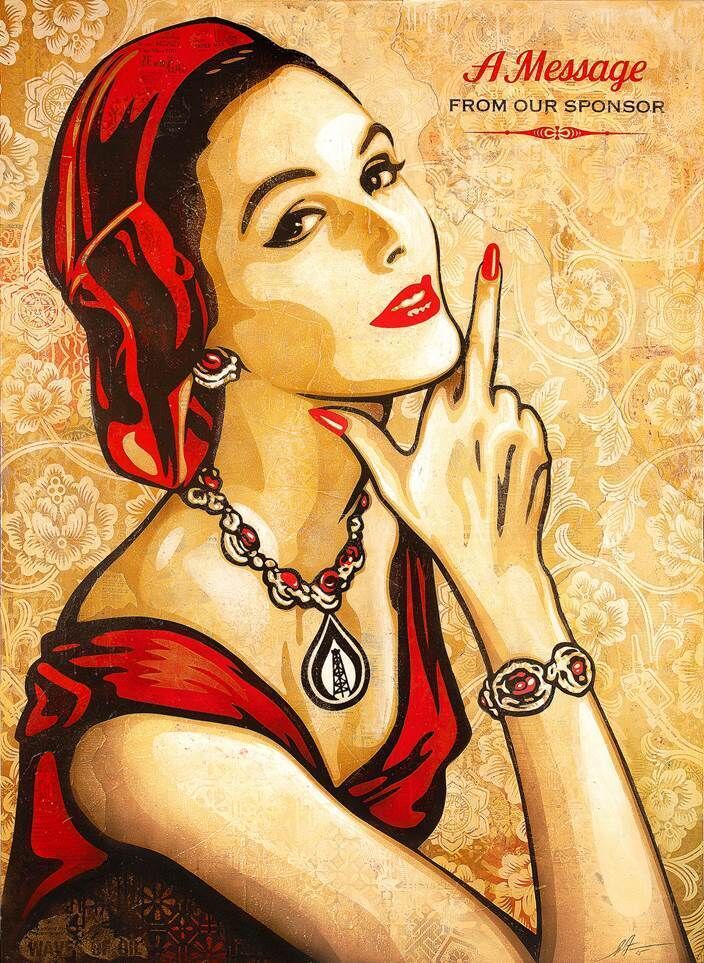 Shepard Fairey
A Message from Our Sponsor, 2015
Jacob Lewis Gallery 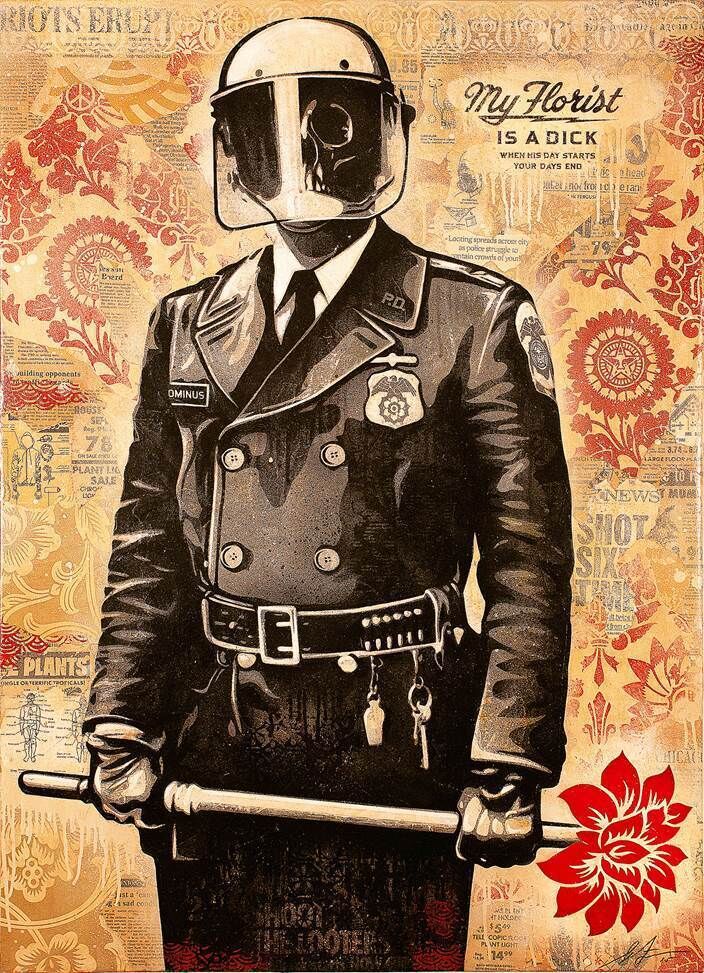 Shepard Fairey
My Florist is a Dick, 2015
Jacob Lewis Gallery
Advertisement
Artsy: How did you make this group of paintings?
SF: The paintings are mixed-media pieces that incorporate collaged found elements as well as elements I create by screen printing, stenciling with spray paint, and traditional painting. I usually start with an illustration of the primary subject, scan it, and work out digital sketches, considering how typography and other elements could work. This resolved sketch is the basis for the paintings but there is often improvisation in the painting itself. The great thing about incorporating a lot of layers of collage is that anything I don’t like, I can cover up until I’m happy. 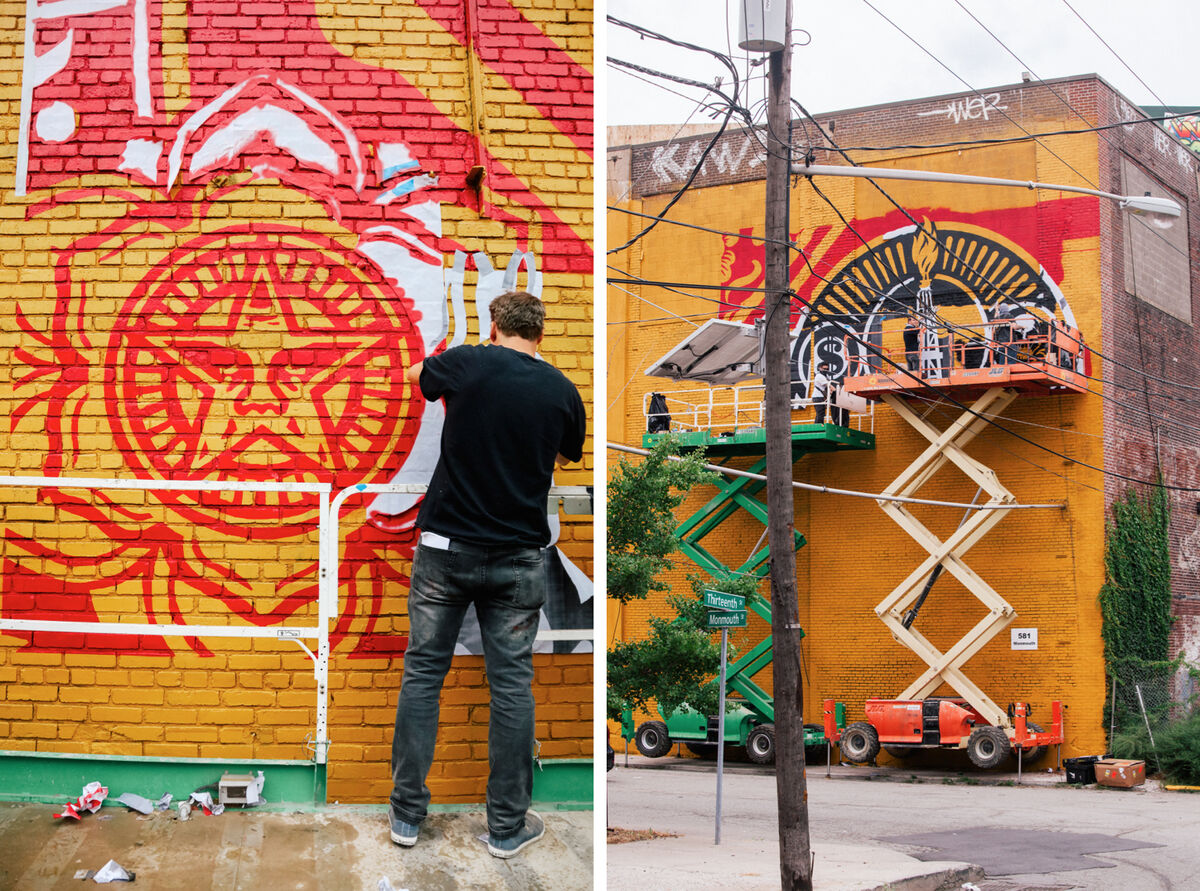 Artsy: Can you tell us about how your approach may differ when creating work for the street versus work for a gallery or museum exhibition?
SF: A lot of the imagery I make overlaps between the street and the gallery, but there are considerations that are very different for each one. In a gallery, you have an audience that is there to spend time with the work. With my paintings I can use a bold primary image, but I can also incorporate a lot of subtleties in layers of collage, stenciling, and brushwork.
When I work on the street, the imagery needs to compete with a lot of other imagery as well as the frantic pace of life. A lot of work on the street doesn’t last, so I aim for maximum impact within a potentially short life span. 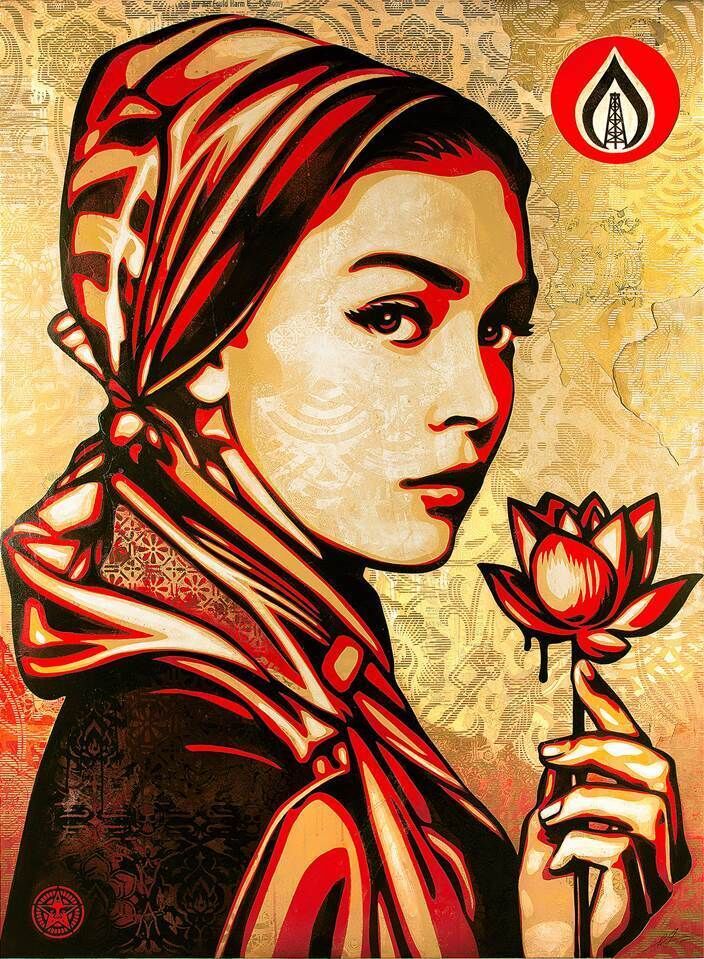 Shepard Fairey
Natural Springs, 2015
Jacob Lewis Gallery
Artsy: Do you think the 2016 American presidential election might spur you to create a portrait of any of the candidates—either critical or hopeful?
SF: Probably not. I’ve been focusing on principles more than personalities, because the players change but if the dynamics of the system remain the same, even a candidate who I think has good ideas will be hindered.

This Artist Is Turning Beijing’s Smog into Jewelry