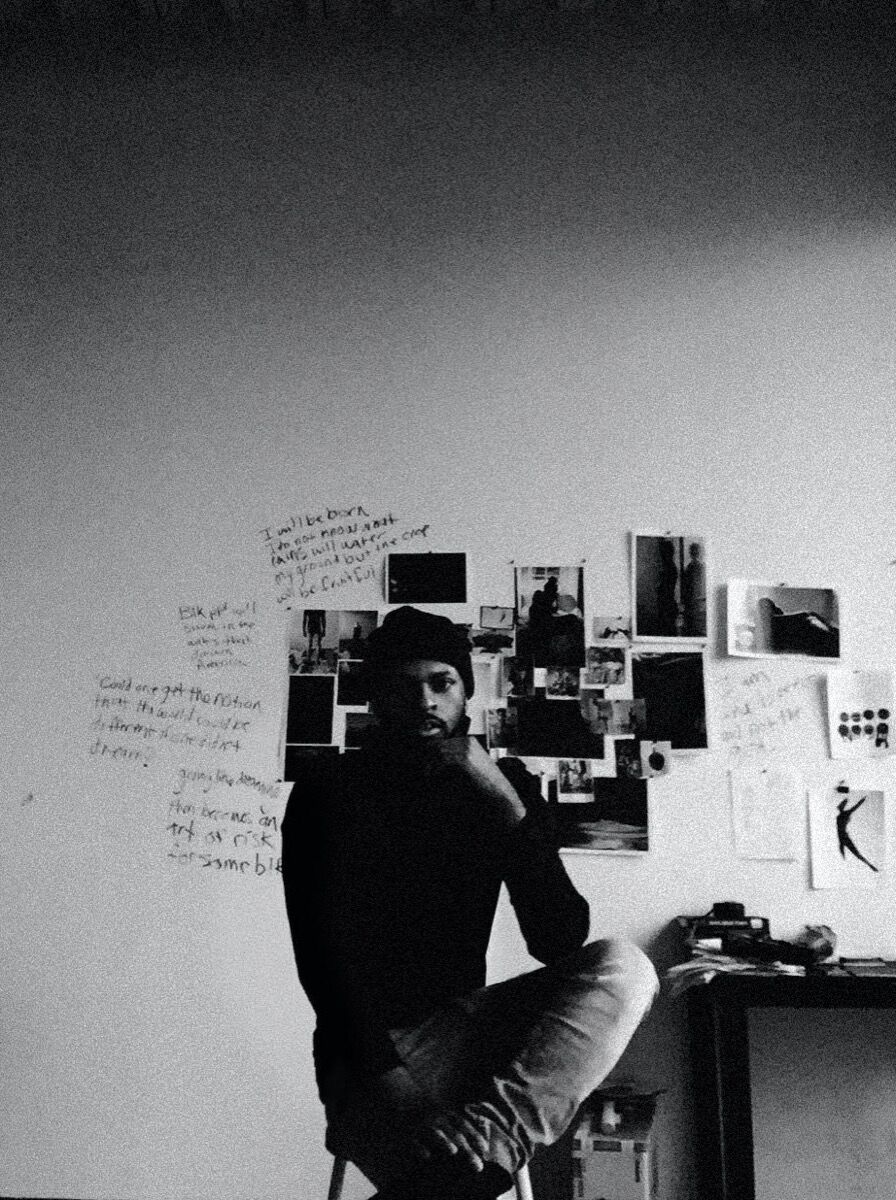 Portrait of Shikeith. Courtesy of the artist. 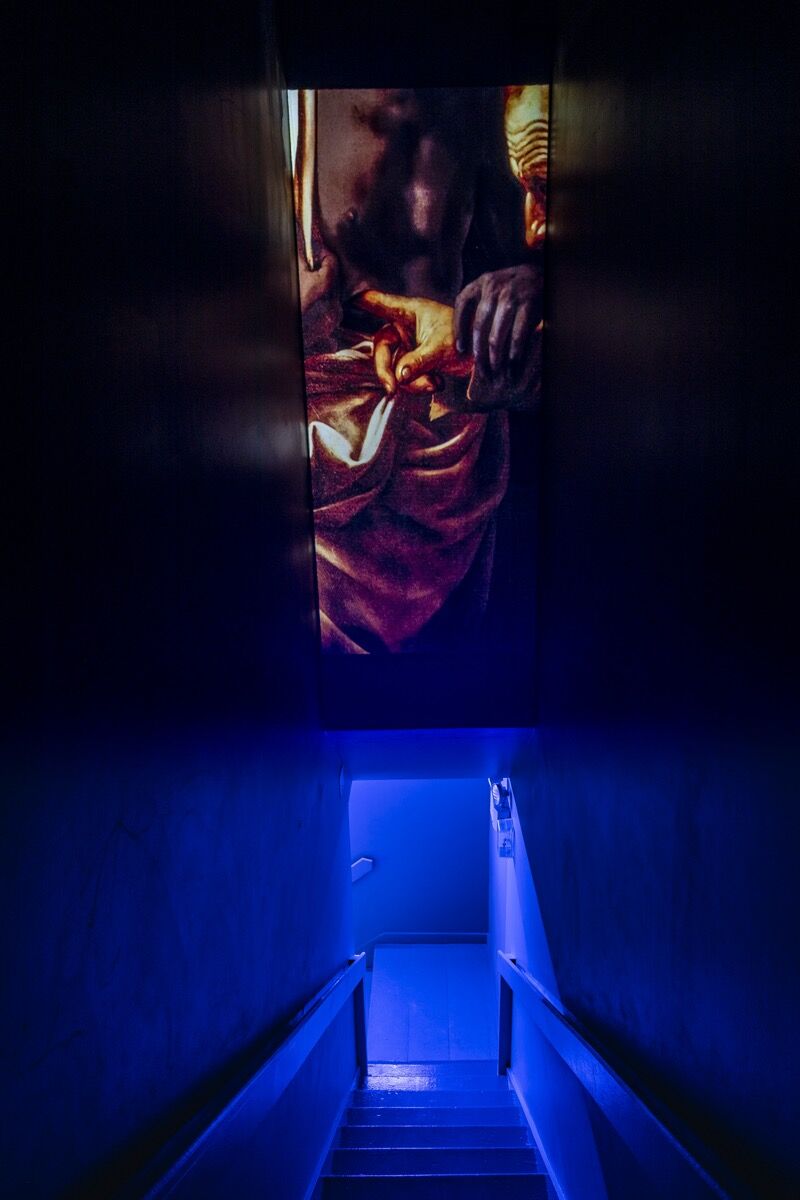 Pittsburgh-based artist Shikeith excavates the most clandestine crevices of the human psyche—both his own and that of his audience. Within his explorations of desire, euphoria, and the sensation of touch, he foregrounds expressions of Black masculinity and queer love.
In his latest solo exhibition, “Feeling the Spirit in the Dark,” on view through January 2021 at the Mattress Factory in Pittsburgh, Shikeith examines various expressions of ecstasy. While stripping the word from its usual, secular connotations, he complicates what society deems as sacred. In this newest show—which involves photography, film, sculpture, and sound—Shikeith presents an experiential installation that guides viewers on a voyage from the transatlantic slave trade, to an abandoned Pittsburgh church.
Born in Philadelphia, Shikeith has a BFA in photography from Penn State and an MFA in sculpture from the Yale School of Art. Now in his early thirties, he is best known for his photographs that reimagine dominant depictions and conceptions of Black manhood. Yet before settling into his career as a fine artist, he worked for several years in fashion photography, shooting for publications like Teen Vogue and Vogue China. Last year, he mounted several solo shows throughout the United States, including “Notes Towards Becoming A Spill” at Atlanta Contemporary and “The Language Must Not Sweat” at Locust Projects in Miami.
The title for his current Mattress Factory exhibition nods to the 1970 song “Spirit in the Dark” by iconic soul singer Aretha Franklin, who famously began her career by singing gospel music as a child. Franklin sings in the chorus: “It’s like Sally Walker, sitting in her saucer / That’s how you do it / It ain’t nothing to it / Ride Sally ride / Put your hands on your hips and cover your eyes, and move on up with the spirit in the dark.” Though Franklin is clearly referencing the classic nursery rhyme, her lyrics can also be read with a more suggestive, even sexual undertone. 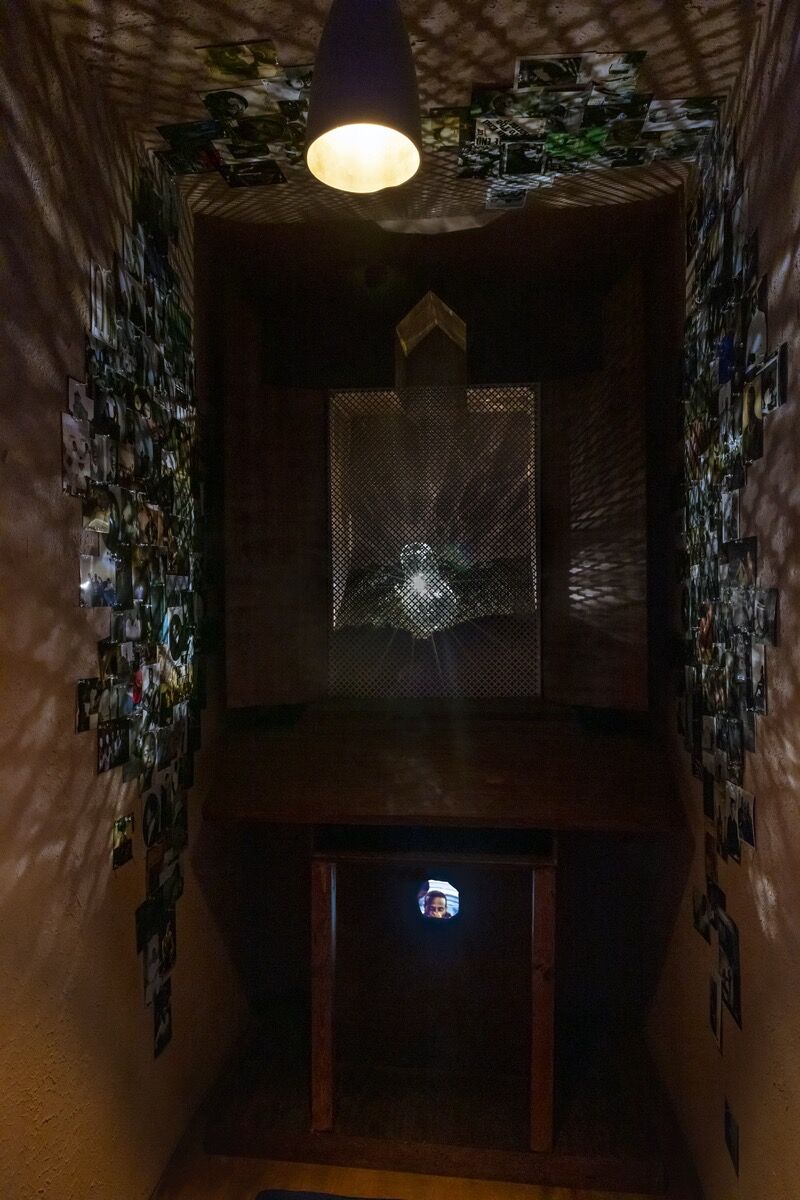 Shikeith himself has a background in music. He sang in a gospel choir through his early years as an undergrad and had plans to become a vocalist when he was young. He noted that while he didn’t grow up in a particularly religious household, he experienced moments of divinity through gospel music.
“I would go [to church] irregularly with my grandmother,” Shikeith explained during a recent virtual tour of his show via FaceTime. “With my mother, everything was always rooted in sound. We didn’t go to church on Sundays, we made church in our house. We would play Donnie McClurkin and Mary Mary, but also Lauryn Hill and Brandy. I was gaining a sense of what was sacred through music.”
The spiritual force of sound is almost immediately felt, and emphasized throughout “Feeling the Spirit in the Dark.” Upon entering the first room of the installation, viewers are enveloped in a sensual blue light, evoking the experience of diving into a tranquil lake at dusk. The floor is covered in water, except for a wooden plank that viewers can walk across to reach the center of the room, where they’re almost entirely surrounded by water. A nine-minute audio track layered with brassy vocals and saxophone fills the room. The song was created by friends and frequent collaborators of the artist: saxophonist Corey Staggers, musical artist Trap Cry, and vocalist Justin Leroy.
Shikeith was inspired, in part, by the journal article “Feeling the Spirit in the Dark—Expanding the Notions of the Sacred in the African American Gay Community” by E. Patrick Johnson, professor of African American studies and performance studies at Northwestern University. Johnson uses Franklin’s song to analyze the intersections of erotic and spiritual ecstasy through the lens of Black queerness. He writes: “Within the context of the Black church, feeling the spirit in the secular/sexual sense is an act of transgression, a symptom of the sinsick soul.” Shikeith’s work highlights the reality that feeling the spirit in a secular way is sometimes inextricable from experiencing a more traditional spiritual euphoria. 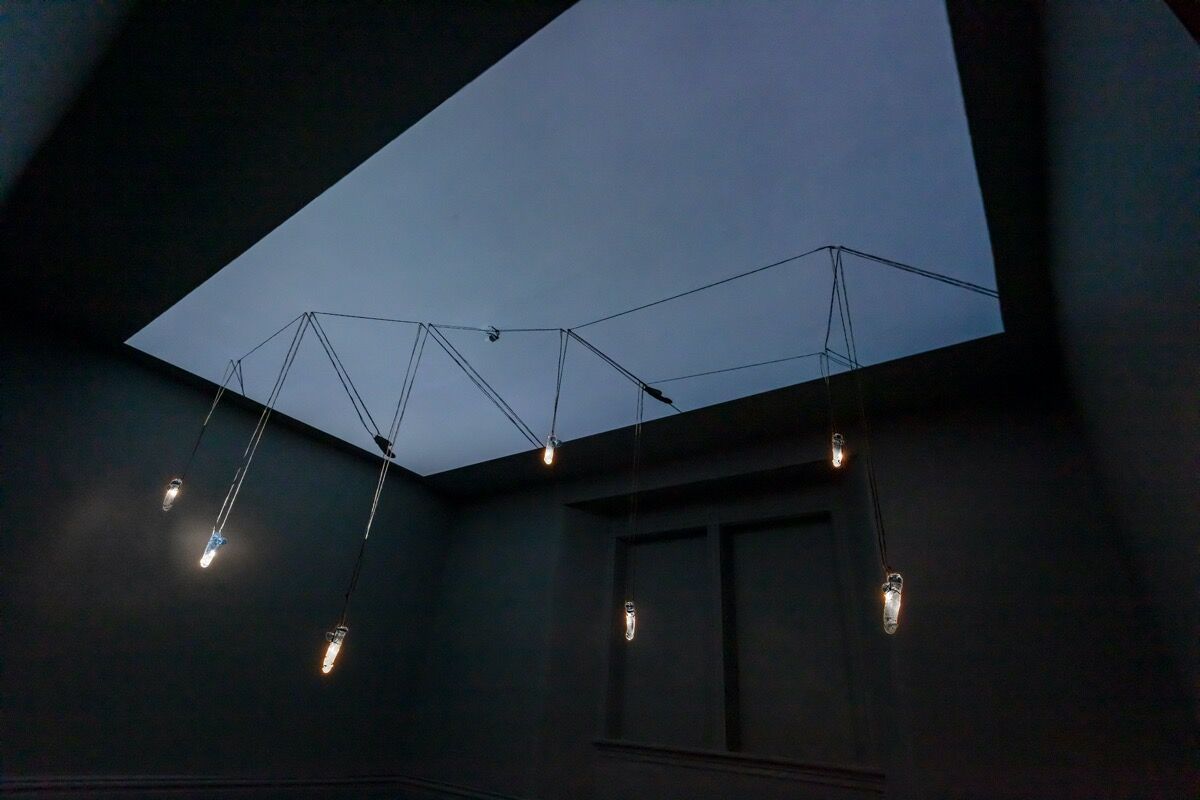 Advertisement
Further along on the first floor of the exhibition, viewers step into a shadowy room that contains a seven-foot-tall wooden structure resembling a confessional booth. The sound of the ocean floats through the room, honoring African diasporic ancestors who were forced through the brutal conditions of the transatlantic slave route. A small hole is carved into the surface of the wooden altar, through which a three-minute single-channel video of original and archival film plays on a loop. Shikeith calls this opening the “glory hole,” making reference to both a category of porn, and oral histories that detail how enslaved people would cut holes into the side of slave ships to let light inside.
The film shown through the hole features seemingly contradictory imagery. The screen flashes from a scene of a Black man catching the Holy Ghost and writhing in ecstasy, to a clip of a man mid-climax. The film also shows one Black man dancing in slow motion, completely bare in an abandoned church. His body is covered in glitter as he undulates his hips and spine languidly through the desolate sanctuary.
Shikeith is interested in the way that, from slavery to the Black church, “Black manhood has been constructed across time,” he said. “I’m drawing parallels between the ways in which these things were conjured. All of these ecstatic experiences occurring are collaged with one another.” 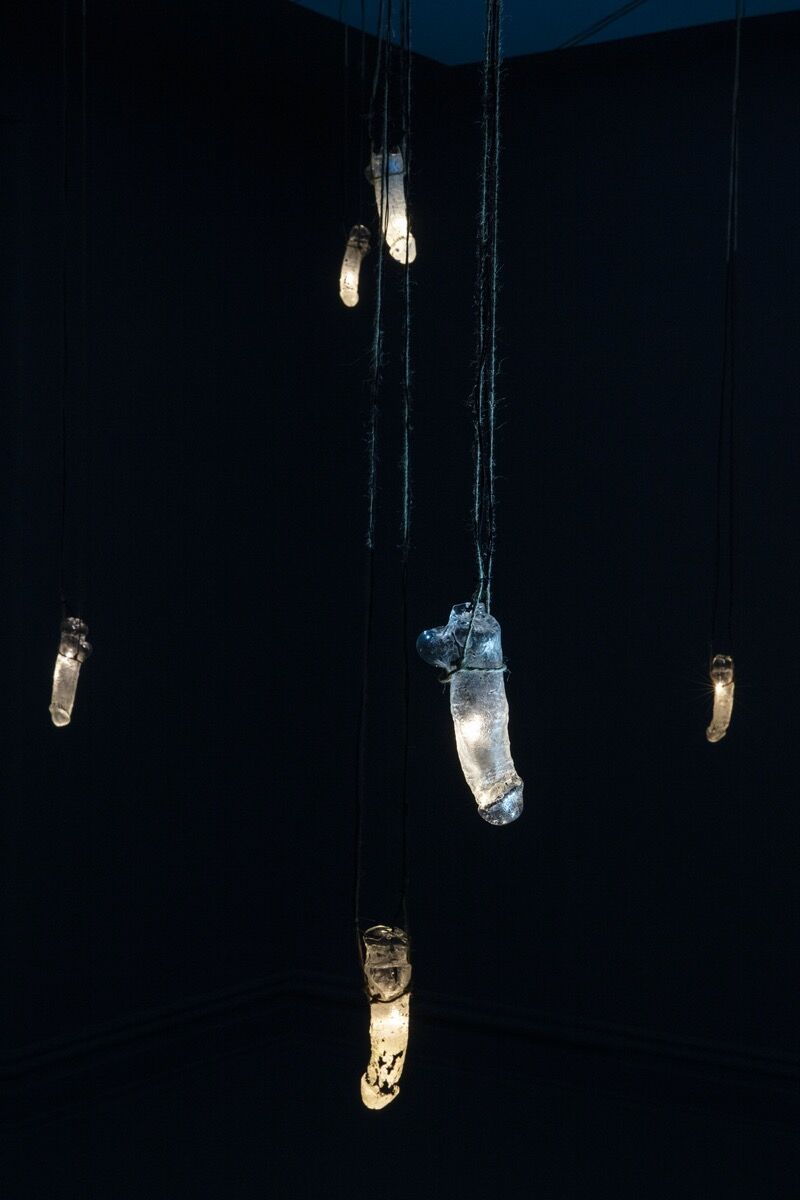 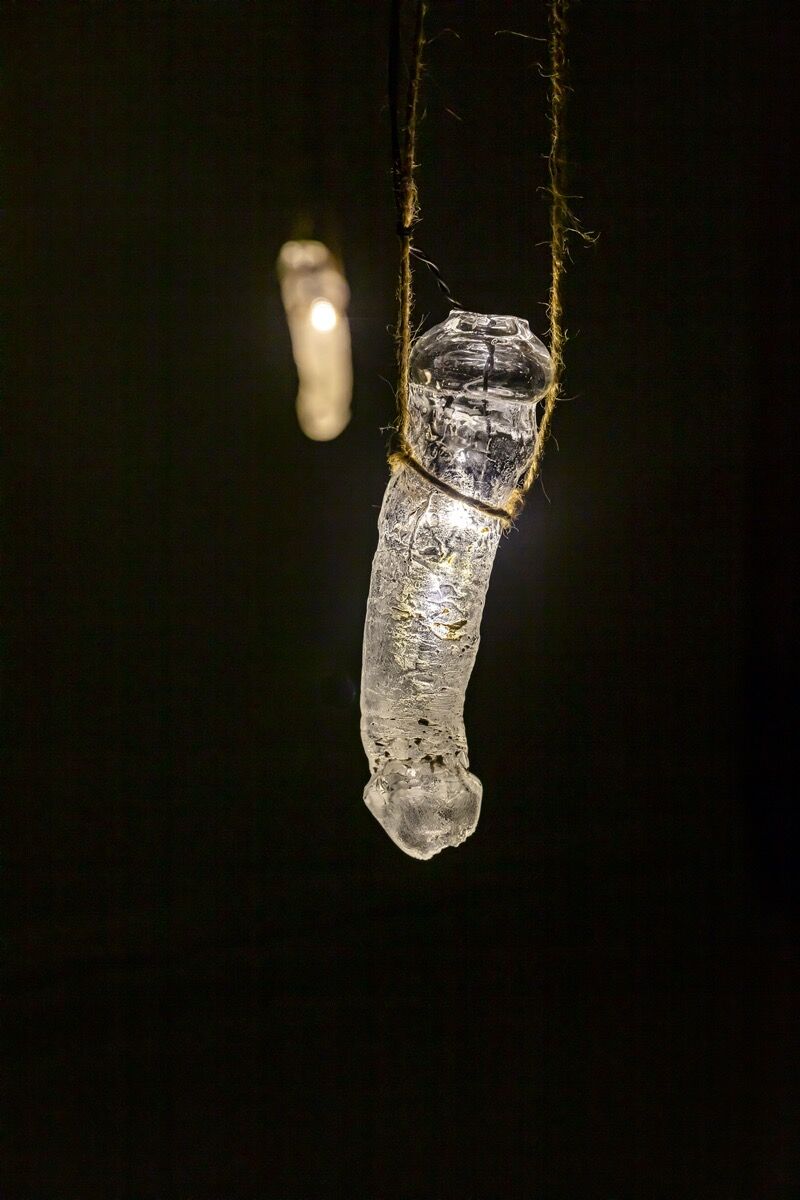 On the second floor, viewers journey into a glowing room painted haint blue. A projector casts the same hue on the ceiling of the room, emulating a tradition historically practiced by Black people throughout the South to ward evil spirits away from the home. Eight glass-blown sculptures of penises are suspended from the ceiling with twine; inside each of them is a single light. The sculptures are arranged along the ceiling in the shape of the big dipper—a symbol, Shikeith said, that gestures to the slaves who looked to the stars as guides on their quests for freedom.
Over the course of about an hour, the projection fades to black, leaving the room in total darkness, except for the glow of the illuminated sex organs. Shikeith chose to present the penises detached from a body, to signify the extreme violence that Black men weather, especially in relation to their sexuality, during and after slavery.
Shikeith’s artistic practice, and especially “Feeling the Spirit in the Dark,” unearths the intricate and lasting impacts of slavery on Black life, love, and sexuality. His explorations of religious disembodiment and “ecstatic experiences” offer an important and pointed analysis on how the institution of slavery affected one of the most intimate aspects of human existence.
Daria Harper
Related Stories