When Sigmund Freud fled Nazi-occupied Vienna in 1938, at age 82, there was only one prized object among his many earthly possessions that he couldn’t imagine life without: a Roman copy of a 2nd-century bronze statue of the goddess Athena. For years, this female deity of reason, war, and handicraft occupied center stage on the desk where the founder of psychoanalysis wrote his pioneering theories on the unconscious. She was just one member of an enormous audience of statuettes that watched the Austrian doctor work from the edges of his desk and the cabinets lining his office.
In addition to being a collector of dreams, psychological conditions, and verbal slips, Freud was also an avid collector of antiquities. “The psychoanalyst,” he said to an early patient famously dubbed the Wolf Man, “like the archaeologist in his excavations, must uncover layer after layer of the patient’s psyche, before coming to the deepest, most valuable treasures.” Freud spent his career exposing his patients’ countless psychic layers, but by the time of his death, just one year after leaving Vienna for London, he had also managed to amass over 2,000 physical treasures from ancient kingdoms in Egypt, Greece, Rome, India, China, and Etruria. Freud began accumulating this extensive collection in 1896 at an important juncture in his life. His father had just died; he was busy setting up his very first office and was on the verge of beginning his own self-analysis. Since he was still at the outset of his career (and supporting a family of six children), Freud initially didn’t have much disposable income to devote to his collecting habit. As a result, his earliest purchases were plaster reproductions of Italian sculptures, including
Michelangelo
’s Dying Slave (ca. 1513).
As Freud grew more established and his tastes became more refined, he limited himself to collecting only original objects from antiquity, treasure-hunting in Vienna’s commercial antiquities market. The artworks that hung above his now-famous couch, where patients reclined during their psychoanalytic treatments, included an ancient Roman frieze, a 3rd-century Egyptian mummy portrait, and a reproduction of French
Neoclassical
artist
Jean-Auguste-Dominique Ingres
’s Oedipus and the Sphinx (1808). While the latter is admittedly a copy of a painting, the mythical Greek theme it depicts was cherished by the man who both identified himself with Oedipus—surmounting the riddles of the unconscious—and also theorized the Oedipus complex. 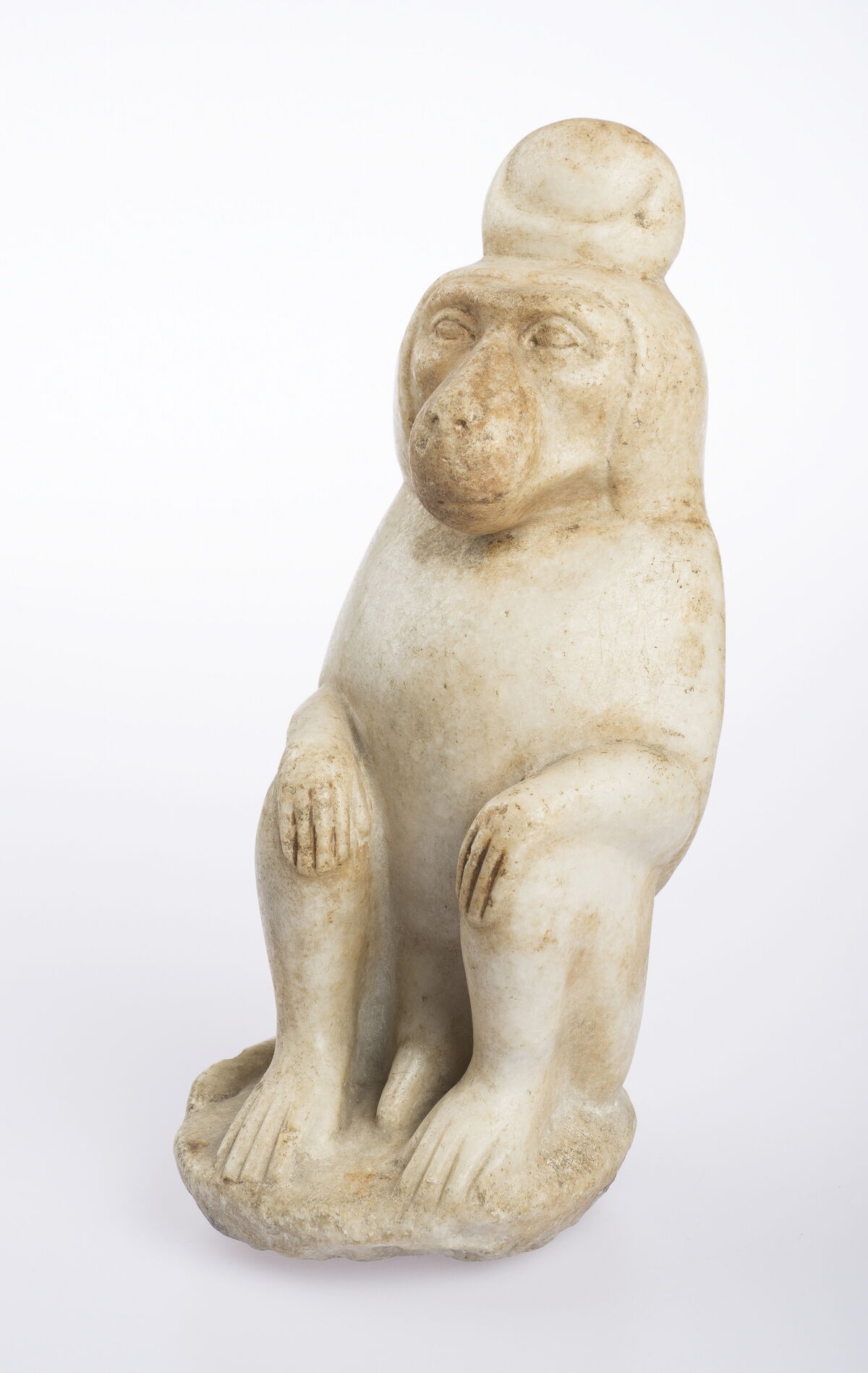 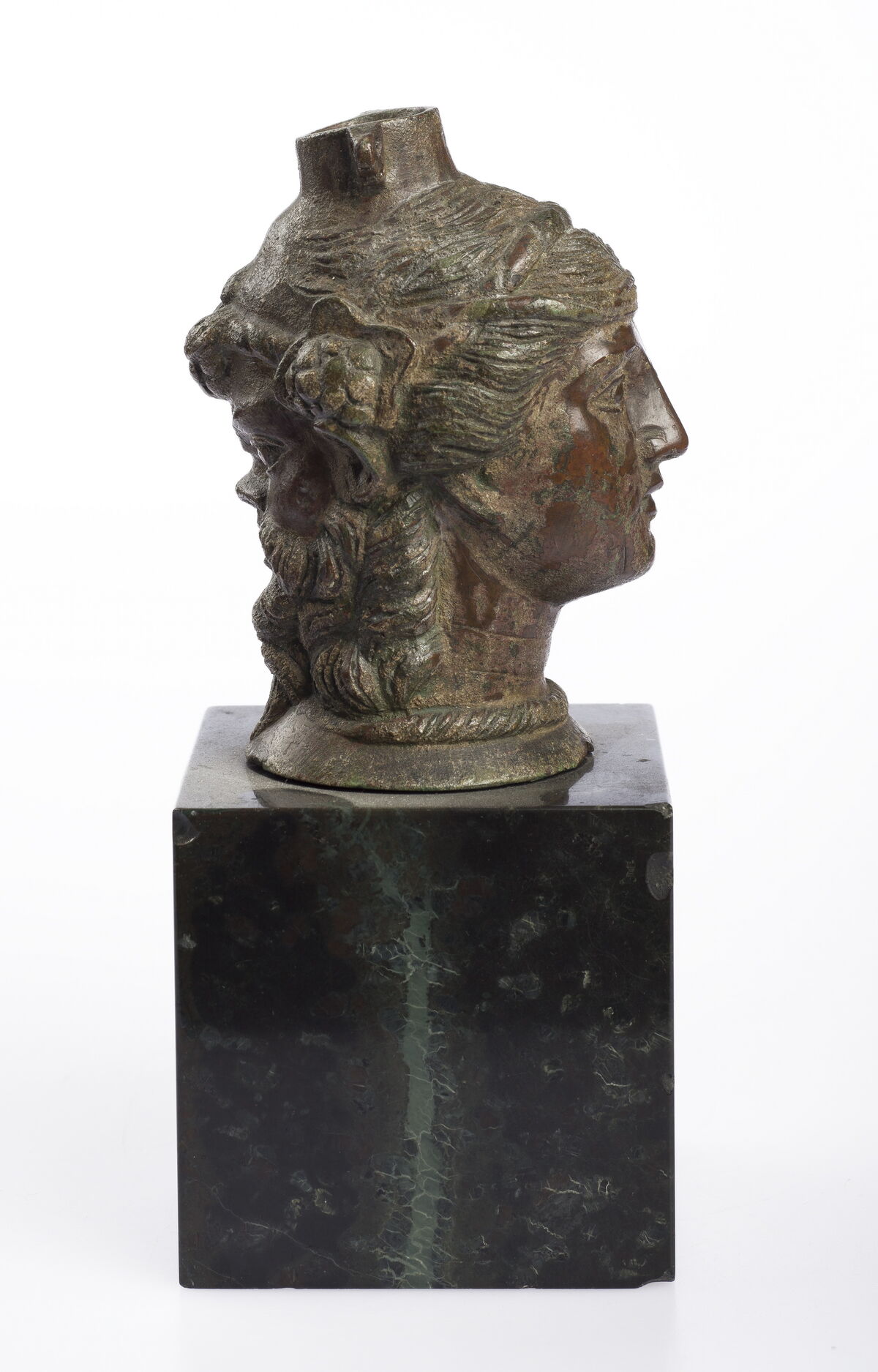 Perfume Bottle (Balsamarium) in the Shape of a Maenad and a Silenus, 3rd century BCE. Photo by Ardon Bar-Hama. Courtesy of the Freud Museum London.

Advertisement
The walls of Freud’s Viennese and London offices offered a medley of places and periods. “Freud’s own display style was personal,” explained Bryony Davies, assistant curator at the Freud Museum in London. “His objects all appear in his unique way.” Freud’s original curatorial choices have been maintained by the house museum, which has preserved his study exactly as it was arranged at the time of his death in 1939. Athena was the first to traverse the English Channel to Freud’s London office, but the rest of his antiquities soon followed, thanks to the advocacy of his former patient and colleague, Princess Marie Bonaparte, and help from the Kunsthistorisches Museum in Vienna.
While his walls were a pastiche of style, Freud’s cabinets, on the other hand, were categorically arranged. In the collection’s London home, a group of Eros statues shares the same shelf, funerary Egyptian objects are clustered in another, and ancient Greek lekythoi vessels are displayed together. “This makes them look quite orderly amid the mixture of objects,” Davies noted of the overall assemblage of diverse objects, loosely unified by the fact that they caught the psychoanalyst’s interest. “The most notable exception to this is Freud’s desk—this is where he put his favorite objects, as well as his practical ones.” Keeping Athena company is a mishmash of items both aesthetic and practical, antique and modern. Egyptian goddesses stand alongside pens; cigar boxes are within reach of a Tang Dynasty Chinese figure. 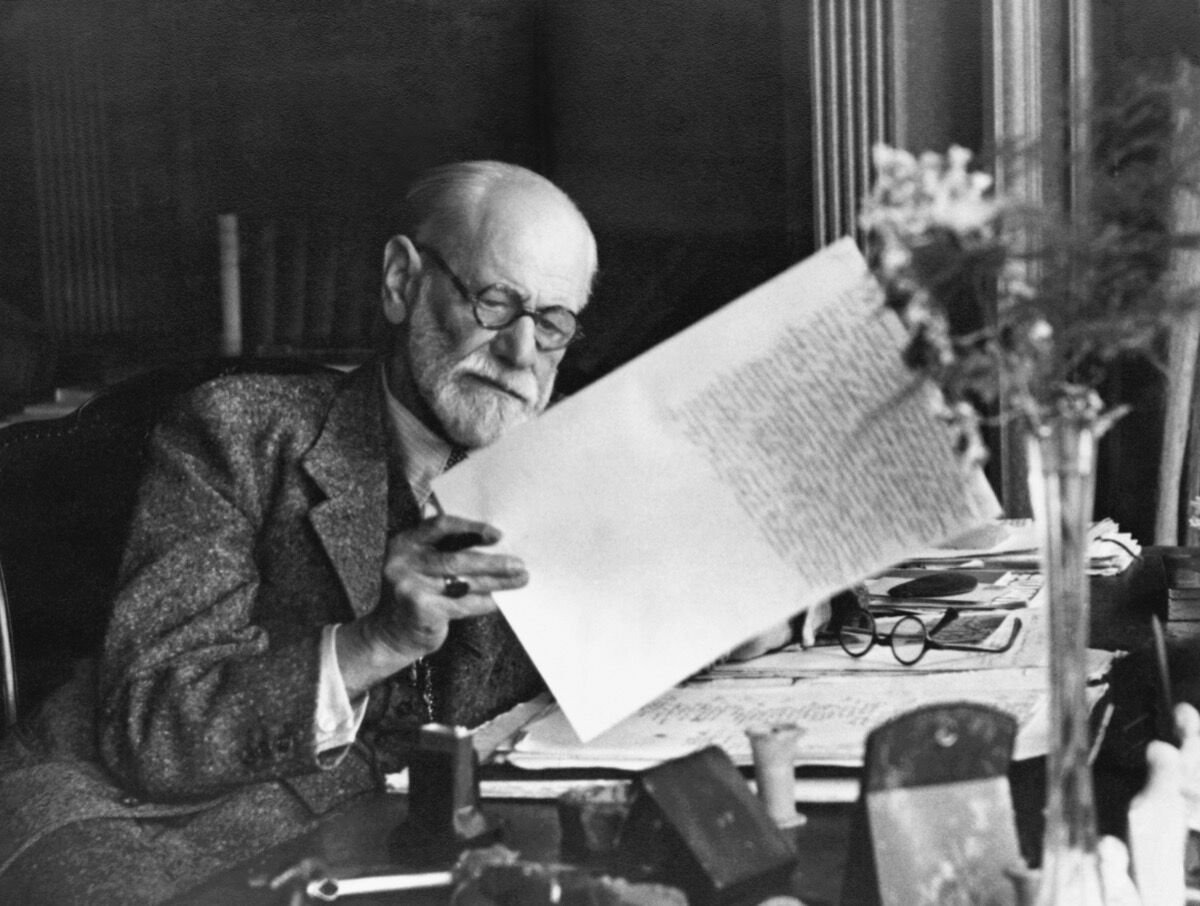 Sigmund Freud at his desk in his Vienna home. Photo via Getty Images.

A particularly prized object stands on the right hand side of the desk: a marble statuette of the ancient Egyptian god Thoth. Paula Fichtl, Freud’s loyal housekeeper (and a master at dusting his clustered collection while maintaining its painstaking arrangement), recalled the doctor patting Thoth’s bulbous, baboon-like head each morning and stroking it while writing or deep in thought. Thoth is credited with inventing hieroglyphics, written symbols that intrigued Freud. “Perhaps the connections between Freud’s collections and his theoretical work are most clearly demonstrated in his interest in Egyptian hieroglyphs,” said Stefan Marianski, education officer at the museum. “He sometimes compared dreams to hieroglyphic texts which could be deciphered with the right tools.”
The many two-faced figures Freud owned also suggest an overlap between his art collection and ideas. A bronze amulet of Janus, the Roman god of beginnings and endings, and a bronze container with a maenad’s face sculpted on one side and a satyr on the other are two notable examples. Dualism was a prominent part of Freud’s thinking, and is reflected in many of his theories, including principles that pit pleasure versus reality, the connection between libido and aggression, and life and death instincts, referred to as Eros and Thanatos. Freud surrounded himself with visual sources of inspiration that made their way into his manuscript pages, confining the thousands of objects he stockpiled to the consultation room and study that constituted his workspace. The rest of his home was conventionally bourgeois, decorated with family photographs and fin-de-siecle furnishings. The Wolf Man later recalled that Freud’s study didn’t have the look of “a doctor’s office but rather of an archaeologist’s study.”
Being surrounded by his collection may have encouraged Freud to use familiar archeological terms in order to explain his process of delving into the unconscious. “I arrived at a procedure which I later elevated to a method,” Freud wrote around the time he began collecting. “The procedure of clearing away, layer by layer, the pathogenic psychical material, which we like to compare with the technique of excavating a buried city.”
Of course, psychoanalysis and archaeology are not the same. “Psychical objects are incomparably more complicated than the excavator’s material ones,” he notes in Constructions in Analysis (1937). “The main difference between them lies in the fact that for the archaeologist the reconstruction is the aim and end of his endeavors, while for analysis the construction is only a preliminary labor.” Collecting seems to have been a preliminary labor for Freud, too. He had assembled what was, to him, a visual illustration of an ancient past unconsciously interred in our collective modern psyche. But the work did not end in bringing his trinkets home—it was there that they sprouted new meanings to help explain our present-day existence.
Karen Chernick
Correction: A previous version of this article incorrectly stated that Freud studied and wrote about the subconscious. Although at one point he used the terms interchangeably, Freud’s studies were mainly dedicated to the unconscious.
Related Stories