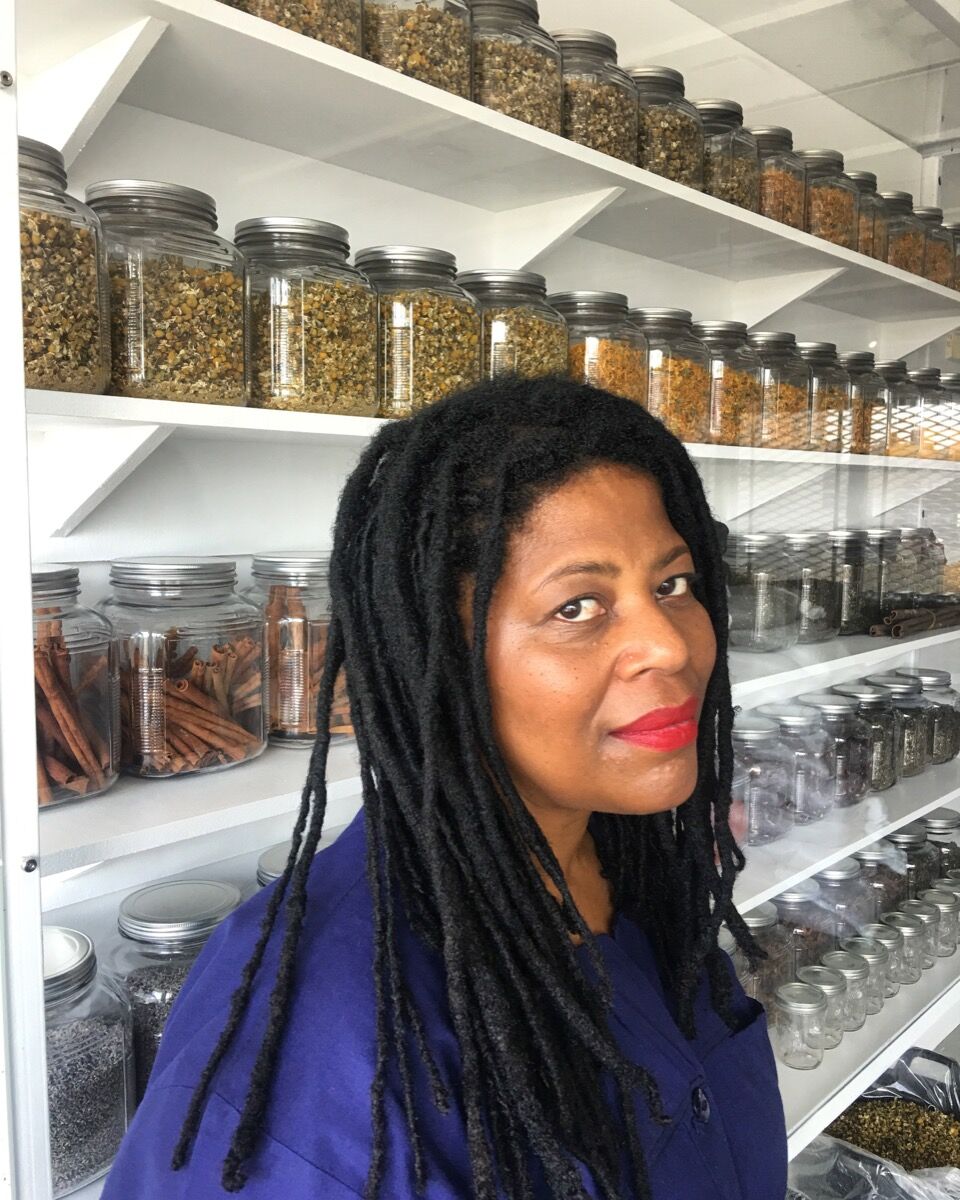 Portrait of Simone Leigh by Robin Cembalest, courtesy of the New Museum.

Simone Leigh
is first and foremost a sculptor. She is best known for an ongoing series of installations that draw on the anonymous labor of female artisans in the Global South and incorporate the loaded forms of watermelons and cowrie shells. They are works that investigate the power of handmade objects to pass along knowledge and index black women’s bodies. It might come as a surprise, then, that Leigh’s latest venture is an alternative health clinic at the New Museum.
Called The Waiting Room, Leigh’s project brings together a diverse cadre of practitioners, artists, scholars, and care experts, whose range of free services offer a radically different, DIY model for spiritual and physical wellbeing. With lectures on civil disobedience, conversations about aging, free acupuncture and massage services, and workshops on herbalism, “Afrocentering,” and self-defense, Leigh presents a holistic alternative to the American healthcare system, in a welcoming space insulated from the injustices disproportionately borne by people of color, especially women. “I really want to move the discussion away from disparity in care,” she told me. “What I’m really interested in is the survival tactics and self-determinant actions of black women. Healthcare is one way in which black women have disseminated their ideas across the U.S., historically, because one of the first jobs that they ever had access to was nursing.”

What the artist’s sculptures and explorations of healthcare share in common: a focus on the body. “If you’re interested in the body and survival, eventually you get around to thinking about this idea of care,” she says. Moreover, the clinic bears Leigh’s masterful eye for space, texture, and juxtaposition. Video montages and documentaries of past works loop in one corner of the room, and at the other end, across from a grid of meditation mats, sits an invitingly staffed makeshift apothecary, whose rows of dried plants evoke South African marketplaces and herbalist pharmacies of yore.
It’s not the objects or visuals that command your attention, however, but rather the warmth and vital energy that course through the space, often thanks to Leigh herself, who spends a lot of time at the museum, speaking with visitors and participating in the workshops. “I’m looking forward to the whole project evolving,” she says. “It’s really a project for me, not an art installation.”
The most pointed aspect of the work might be its title, which refers to a Brooklyn woman, Esmin Green, who died on the floor of an emergency room waiting area, seeking care that never came. It also invokes the physical and psychological toll of waiting more broadly. “There’s this expectation of black women to be behind or come last,” she says. As the spectre of black death fills our streets, social networks, and psyches, and activist movements grapple with their own complicated gender dynamics, Leigh is gently coaxing a conversation that could not be more timely.
The exhibition-cum-residency has its roots in Leigh’s Free People’s Medical Clinic, a public project mounted in 2014 with nonprofit Creative Time and the Weeksville Heritage Center. Prompted to mine Brooklyn’s rich history of radical black self-determination, Leigh found inspiration in several local legacies of separatist healthcare, including the Black Panther Party’s famed free clinics and the United Order of Tents, an organization founded by female former slaves after the Civil War which, operating in secret, has provided shelter, food, and nursing care to black populations. The resulting project was essentially a reenactment of the Panthers’ clinics, held in the former Bed-Stuy home of Dr. Josephine English, the first black OB/GYN in New York (and midwife to Betty Shabazz, wife of Malcolm X).

Advertisement
While collaboration has always been a significant part of Leigh’s practice—she has long-running creative partnerships with artist
Chitra Ganesh
, curator-choreographer Rashida Bumbray, and taiko drummer Kaoru Watanabe, all of whom are involved in The Waiting Room—it takes on new significance here. The network of collaborators, mainly women, all coming at the idea of “self-care” from a range of fresh and practical perspectives, is one of the exhibition’s more profound aspects. She’s using her platform to elevate a number of other brilliant women, including conceptual artist
Lorraine O’Grady
and the criminally under-exhibited Cuban artist
María Magdalena Campos-Pons
, both of whom will deliver public programs. In some ways, this collage of collaborations mimics the network of separatist caregivers whose history Leigh’s residency is steeped in.
At the end of the day, The Waiting Room might best be described as a handful of symbolic gestures that, against a dire backdrop, offers up a pragmatic toolkit for resilient self-determination. Set inside the walls of an art institution, you can’t help but feel saddened by the clinic’s ephemerality, its insufficient scale in the face of American health care’s failure to protect black women. But Leigh has made her peace with this: “There’s plenty of things that are wonderful but that can only happen one time.”
Jared Quinton
Related Stories