When Sipho Gongxeka’s Sister Came Out, He Used His Camera to Reframe Queer Identity in His Township 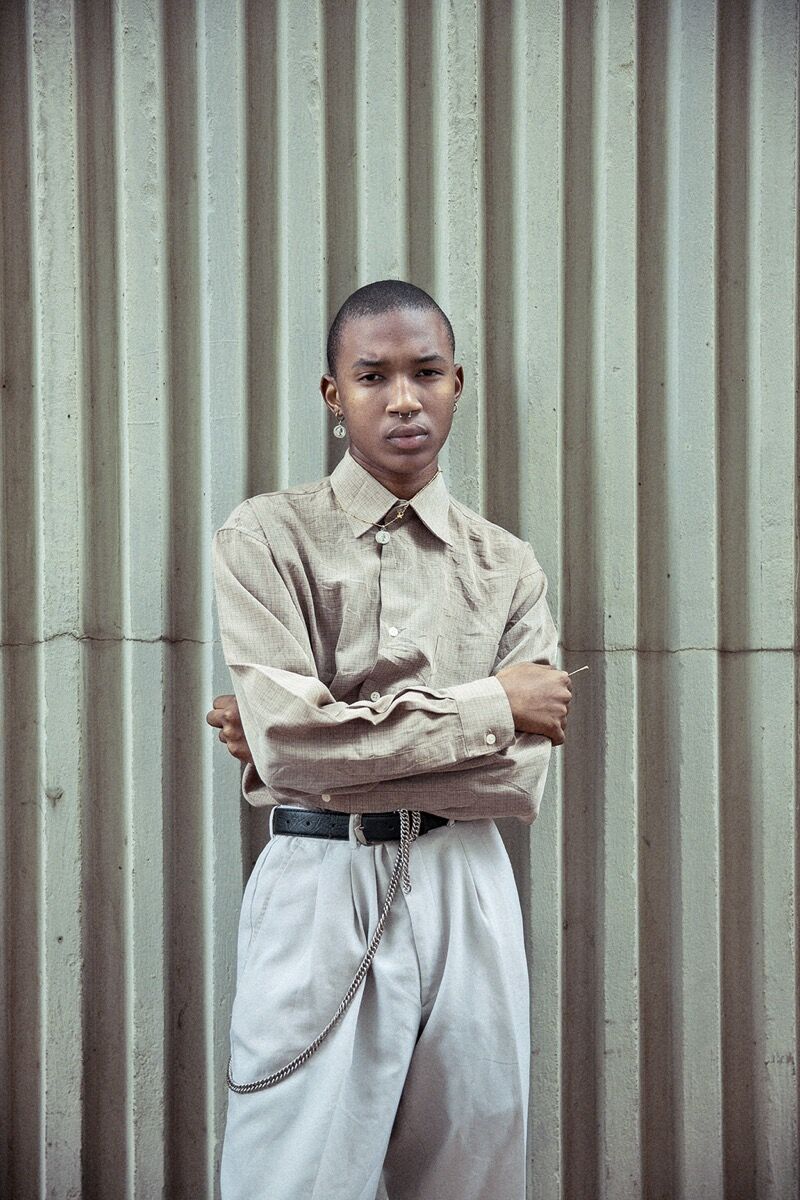 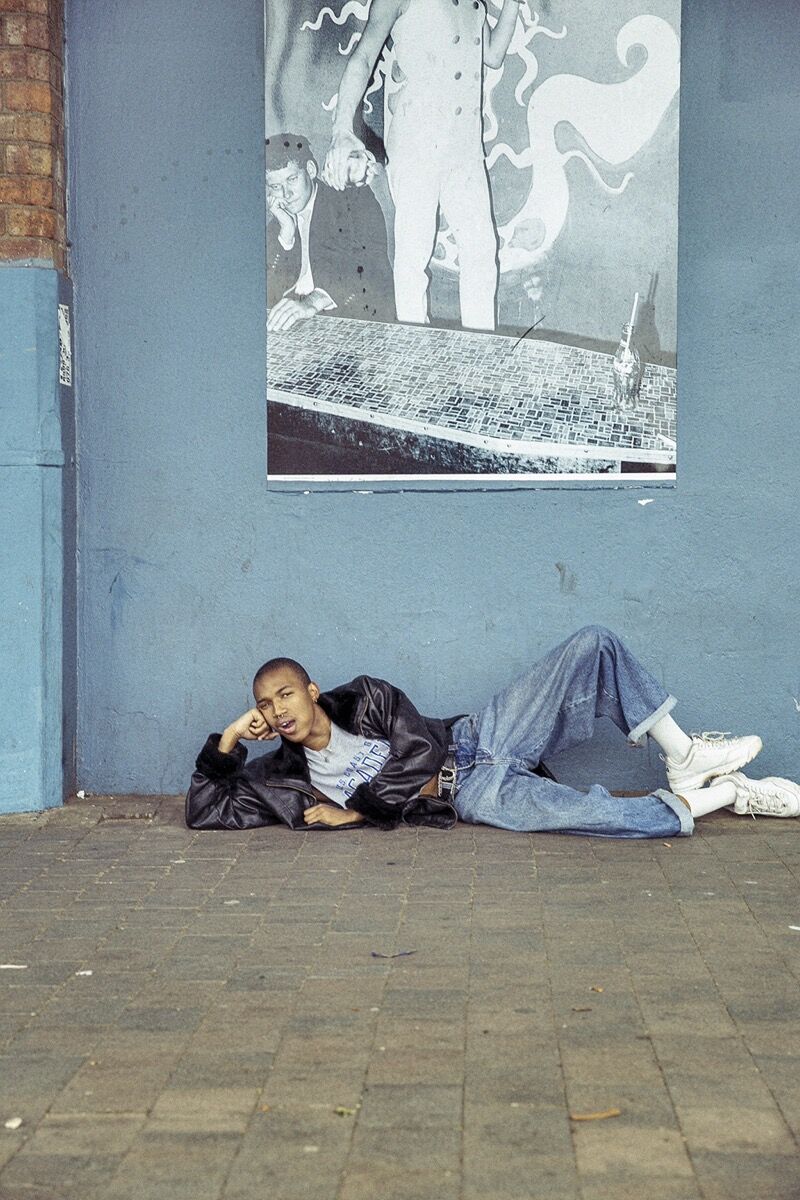 At first glance, you might mistake Sipho Gongxeka for a typical 29-year-old from the Soweto township of Johannesburg. He loves hip-hop, fashion, and football. In his early twenties, he played in South Africa’s lower leagues and was tipped to make it to the top—his friends called him “Rooney,” after the English footballer. But after borrowing a friend’s digital camera during the 2010 World Cup, Gongxeka began to study photography at Johannesburg’s Market Photo Workshop. There, he learned from none other than
Pieter Hugo
, one of South Africa’s most celebrated documentary photographers.
Photography took its place at the center of Gongxeka’s identity; he sensed in it a way “to question what it means to be a man, especially a black man,” he told Artsy from his home in Johannesburg.
Gongxeka lives with his mother and, until recently, his two older sisters. Growing up without a father, his idea of what constituted masculinity came from the street and the media. “If you’re from Soweto, then gangster stereotypes surround you, and you can’t brush them off,” Gongxeka said. “It’s expected of you.” 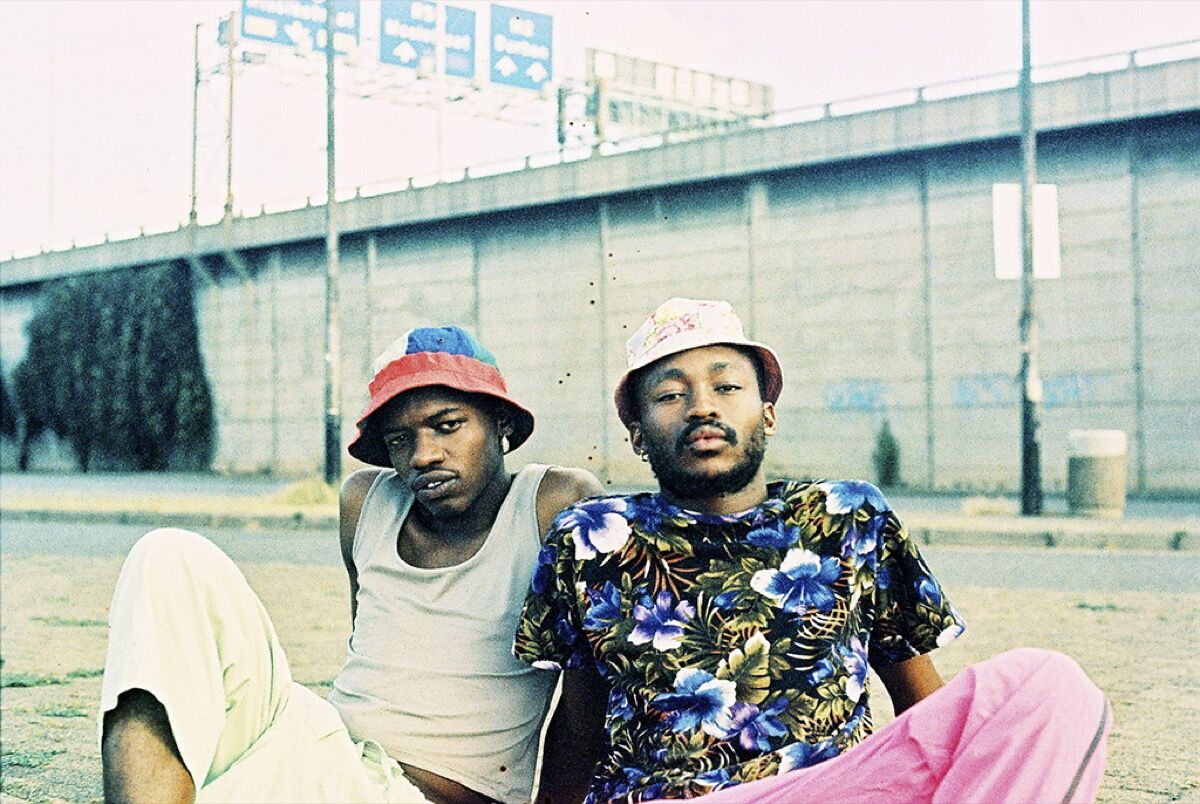 Gongxeka found himself pulled toward fashion portraiture. “Growing up in the township, I learned that how you dress matters,” he said. Clothing was seen as a status symbol, a sign of where you were on the Soweto food chain. Particularly within fashion portraiture, he became interested in “how one’s masculinity, gender, and sexuality can be judged by how we present in public,” he explained. “I wanted to know whether all those stereotypes about me were real.”
Gongxeka’s first series, “Skeem’ Saka,” which translates loosely as “Homeboys in the Township,” was ostensibly a fashion shoot of life in Soweto, featuring street pictures of his friends. But the work also served to challenge the violent, misogynistic depictions of black masculinity he grew up watching on South African television.
In 2014, during the creation of “Skeem’ Saka,” Gongxeka received news that had the potential for seismic consequences in Soweto. His eldest sister, Nolwandle—who, at the time, was 30 years old—told her family she intended on pursuing a relationship with another woman, a revelation that Gongxeka openly admits was fraught with complexity and conflict for his family.
South Africa, on the surface, should be a beacon of LGBTQ rights. In May 1996, it became the first nation in the world to include LGBTQ people as a protected class through its constitution. In 2005, gay marriage was legalized. Sustained legislation has protected non-binary people from discrimination in the workplace, improved access to healthcare, and helped make Johannesburg one of the most vibrant LGBTQ scenes in the whole of Africa. 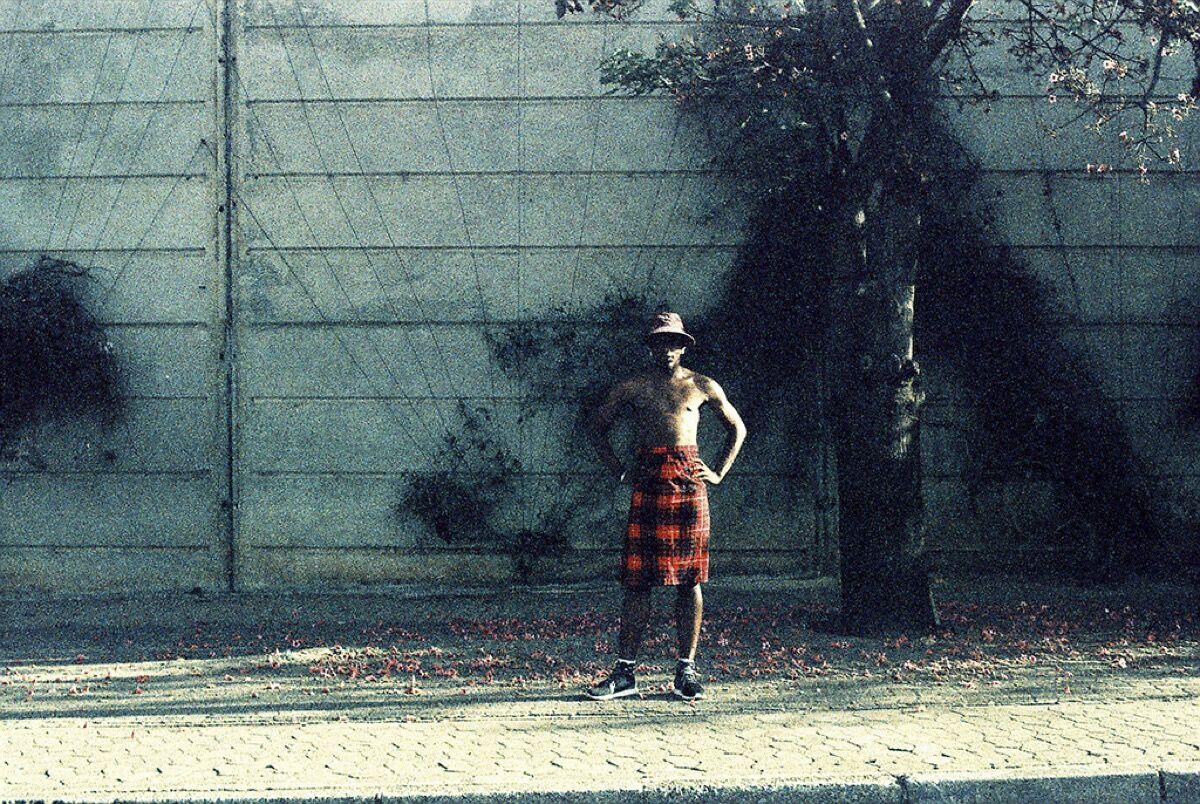 Advertisement
Despite this, South Africa is tarnished by high rates of homophobic hate crimes and sexual assaults. According to a 2009 government survey, one in four South African men admit to having sex with a woman without consent. Of those, nearly half admitted to raping more than once. South Africa is also home to the term “corrective rape”—the sexual assault of gay men and lesbians to “cure” them of their sexual orientation.
The Justice Denied campaign by the Johannesburg group Love Not Hate has publicized how, over the last few years, people who identify as non-binary have been raped, tortured, and murdered in South Africa’s townships—in some cases, lesbian women have reportedly been stoned to death. Love Not Hate has also detailed how many of these hate crimes have spent months—and sometimes years—jammed in the legal system, the perpetrators seemingly easily evading justice. 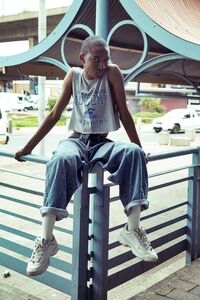 Sipho Gongxeka
View Slideshow
7 Images
After Nolwandle came out to their family, Gongxeka realized that no visual history of the LGBTQ movement existed in South Africa. Any visual exploration of the gay rights movement had been subjugated by reportage of the overall Apartheid struggle. “There was nothing for my sister,” he said. “There was no visual history, no documents to look at, no way of understanding how other queer people had handled Soweto in the past.” He decided to fill that space, creating imagery that reflects on what it might be like to be gay in Soweto, calling the series “House of Realness.”
Gongxeka decided, through his camera, to create “an imaginary archive of a daily life that was never shown,” illustrating a lost history, of sorts, of what queerness would have looked like in South Africa in the late 1980s and early ’90s, when Nolwandle was a teenager. Carefully styling his models—who are his openly gay friends and colleagues—and using 35mm film, Gongxeka’s series evokes a time in South Africa’s history when LGBTQ rights were barely recognized. By doing so, Gongxeka has worked through the dilemma of how to portray such complex and ingrained issues in a way that differs from clichéd approaches in photojournalism, transcending sentimentality or didacticism. 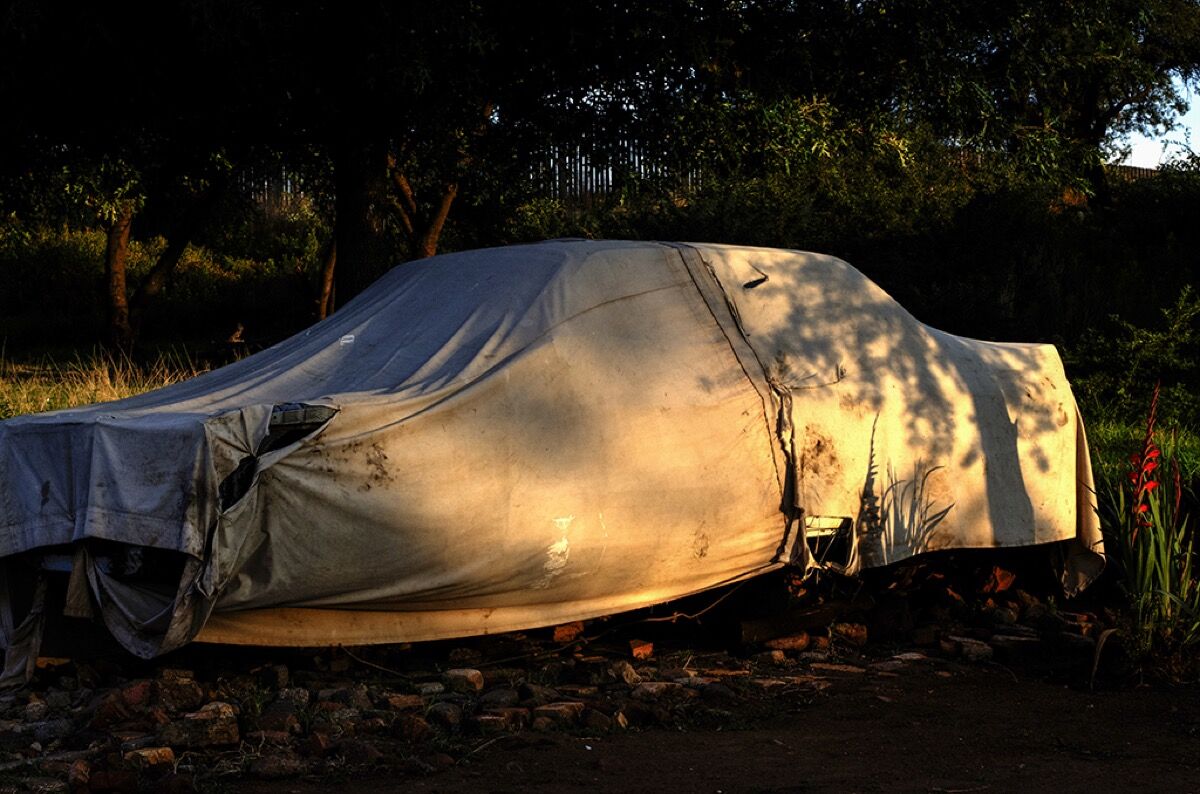 Instead, “House of Realness” examines what it means to grow up in, and be a product of, the township. Through his subtle manipulation of time, Gongxeka is able to weave together personal and collective narratives, and objectively comment on the place he calls home.
Though Gongxeka was inspired by his sister’s coming out to make this series, “House of Realness” does not focus on femininity and lesbianism in the township (though, he said, that will be the basis for his next body of work). This series, like the earlier “Skeem’ Saka,” is more introspective, exploring his own identity within his hometown. “I’m questioning my sexuality and my masculinity, as a black man coming out of the township,” Gongxeka says. “There are so many issues around black masculinity, and I’m trying to unpack some of the stereotypes that come with being black. I’m looking at my own attitude towards gay men, my own attitude towards women. I’m questioning why I talk a certain way, why I dress a certain way.”
After three years of hard work, “House of Realness” has been self-published as a photo book and was exhibited in Johannesburg for the first time at the city’s Keyes Art Mile.
On the opening night of his show, Nolwandle was in attendance. She is now openly in a same-sex relationship, and has recently become the mother to a little boy. She had never witnessed his photography before. What did she think? “I think she was proud of me,” he said.
Tom Seymour
Related Stories