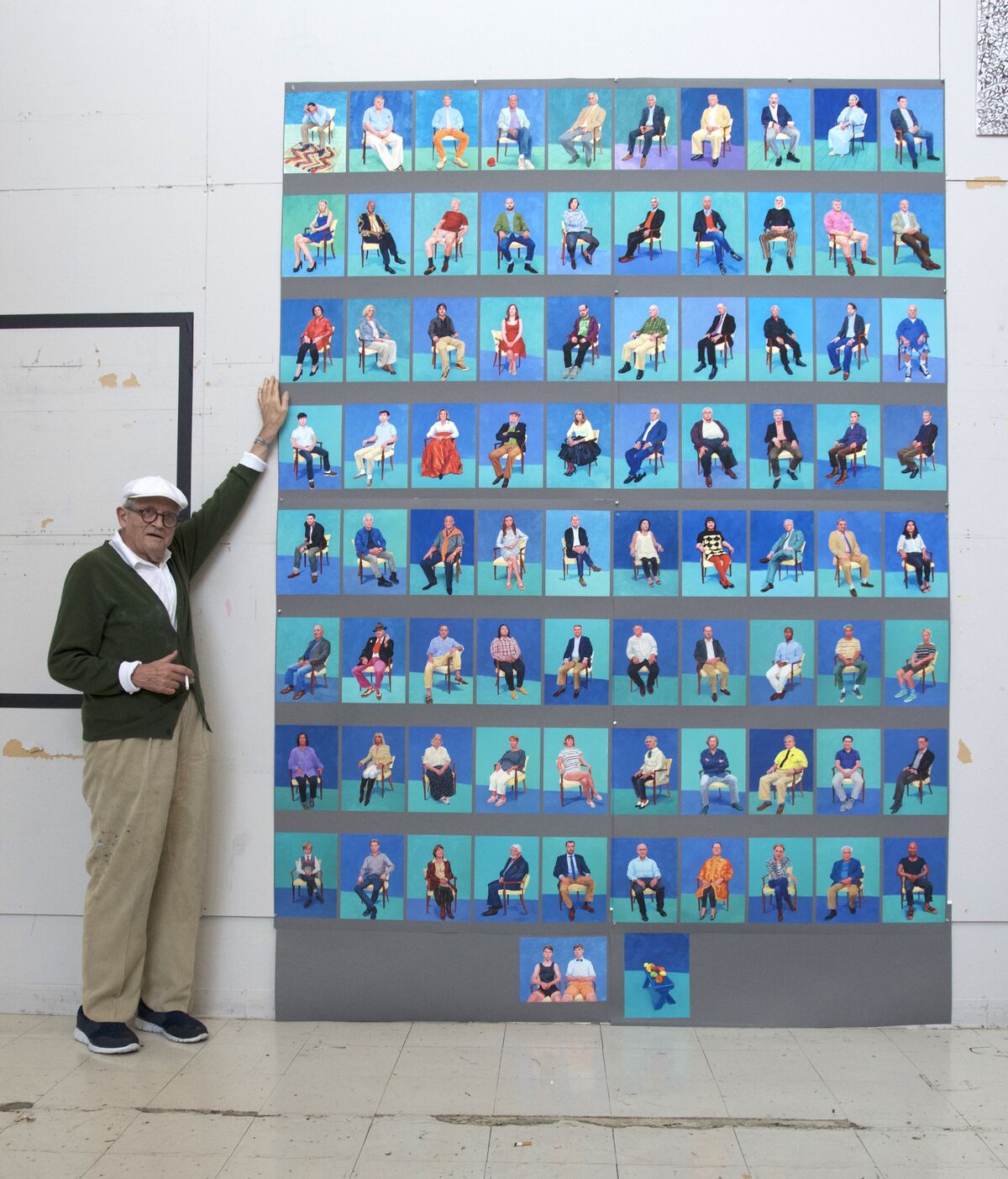 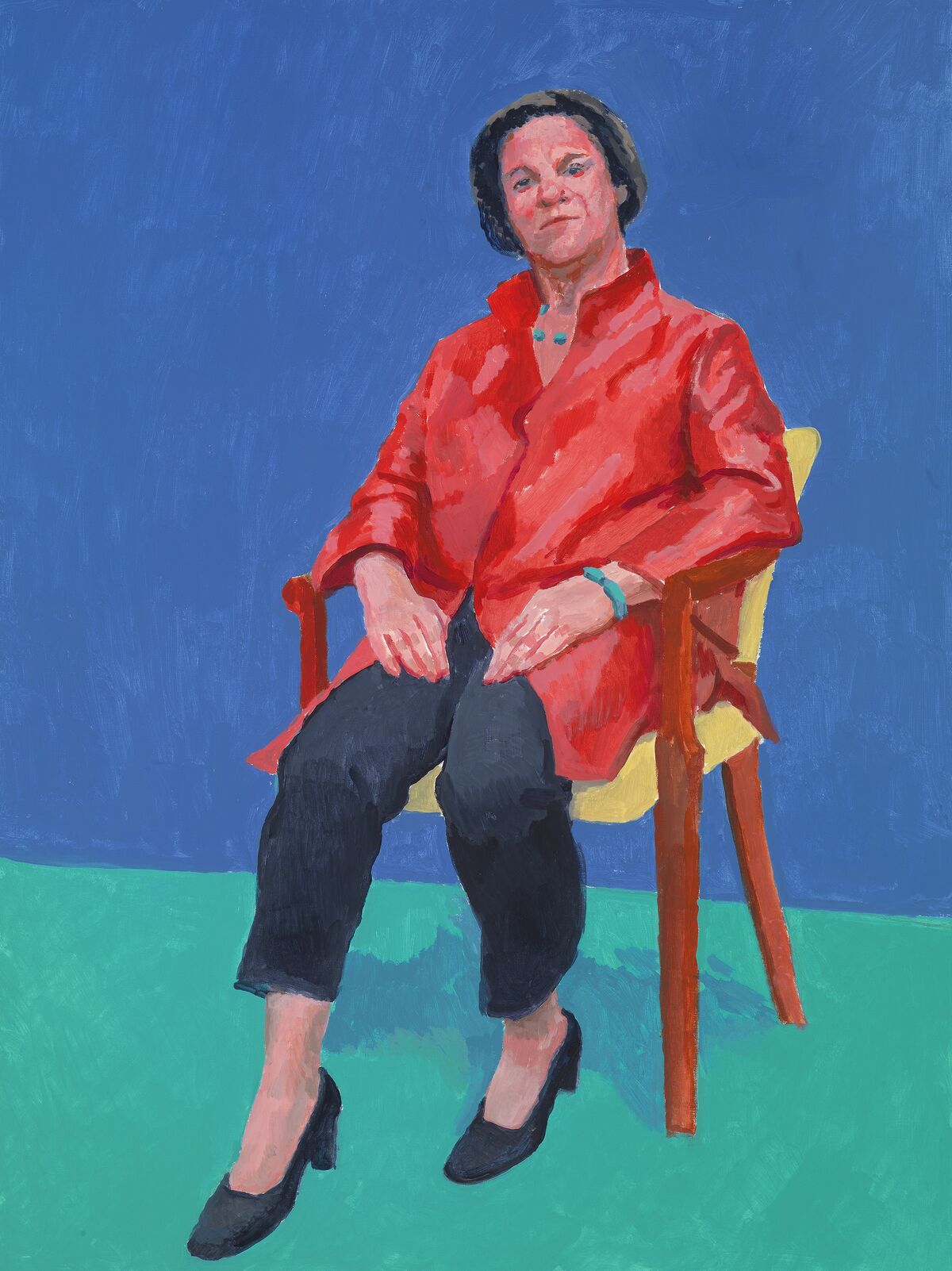 Back in January 2014, Dagny Corcoran had a daunting sartorial decision to make: what to wear to a portrait sitting with
David Hockney
.
The founder of Art Catalogues, the bookstore at the Los Angeles County Museum of Art (LACMA), was thinking of the artist’s paintings of women wearing solid-colored dresses, which resulted in single-hued expanses across the canvas. She decided to try a different tack—to “wear something with decoration on it and give him something to do in case he doesn’t want to concentrate so much on my face,” she told Artsy. Corcoran opted for a sweater patterned with rows of vertical lines, but later regretted the choice. “He is so observant and attentive of everything. He spent a lot of time painting the lines. Then I felt bad about having worn that thing,” she admitted.
Indeed, she’d created some extra work for a very busy artist. Hockney was in the midst of painting 82 new portraits and one still life (all made between 2013 and 2016) for an exhibition currently on view at LACMA. Each measuring 48 inches by 36 inches, the works depict single sitters perched on a wooden chair with a yellow cushion, set against brushy green and blue backgrounds. The impetus, according to a friend, was Hockney’s desire to quickly return to painting after suffering a stroke in 2012. 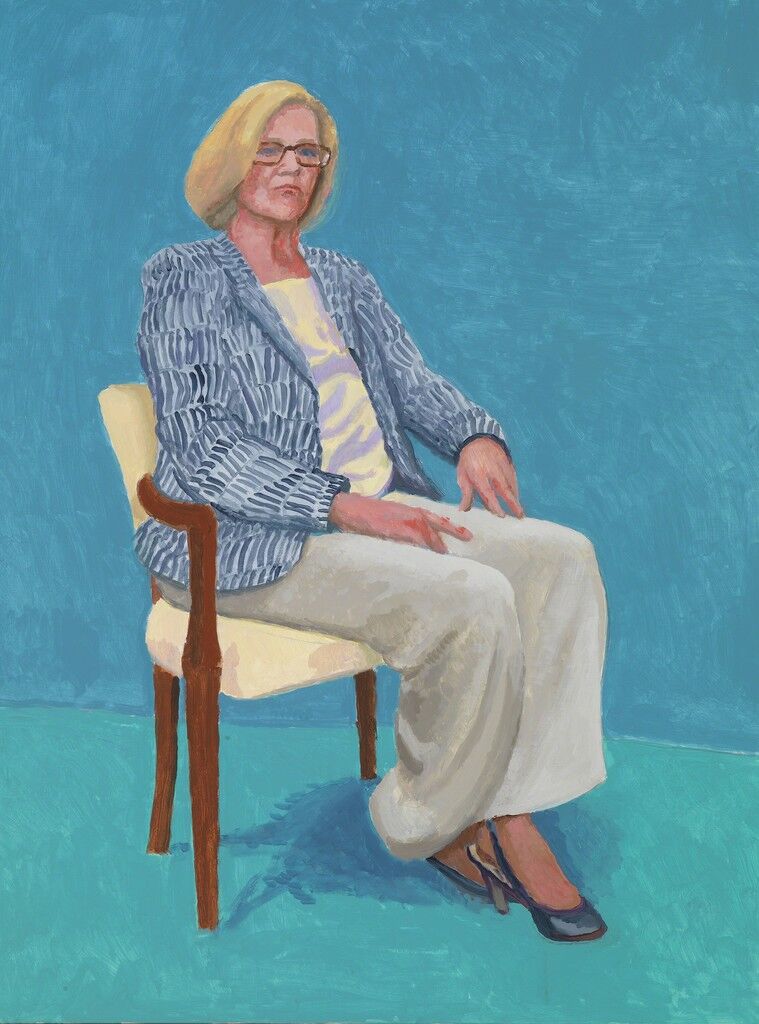 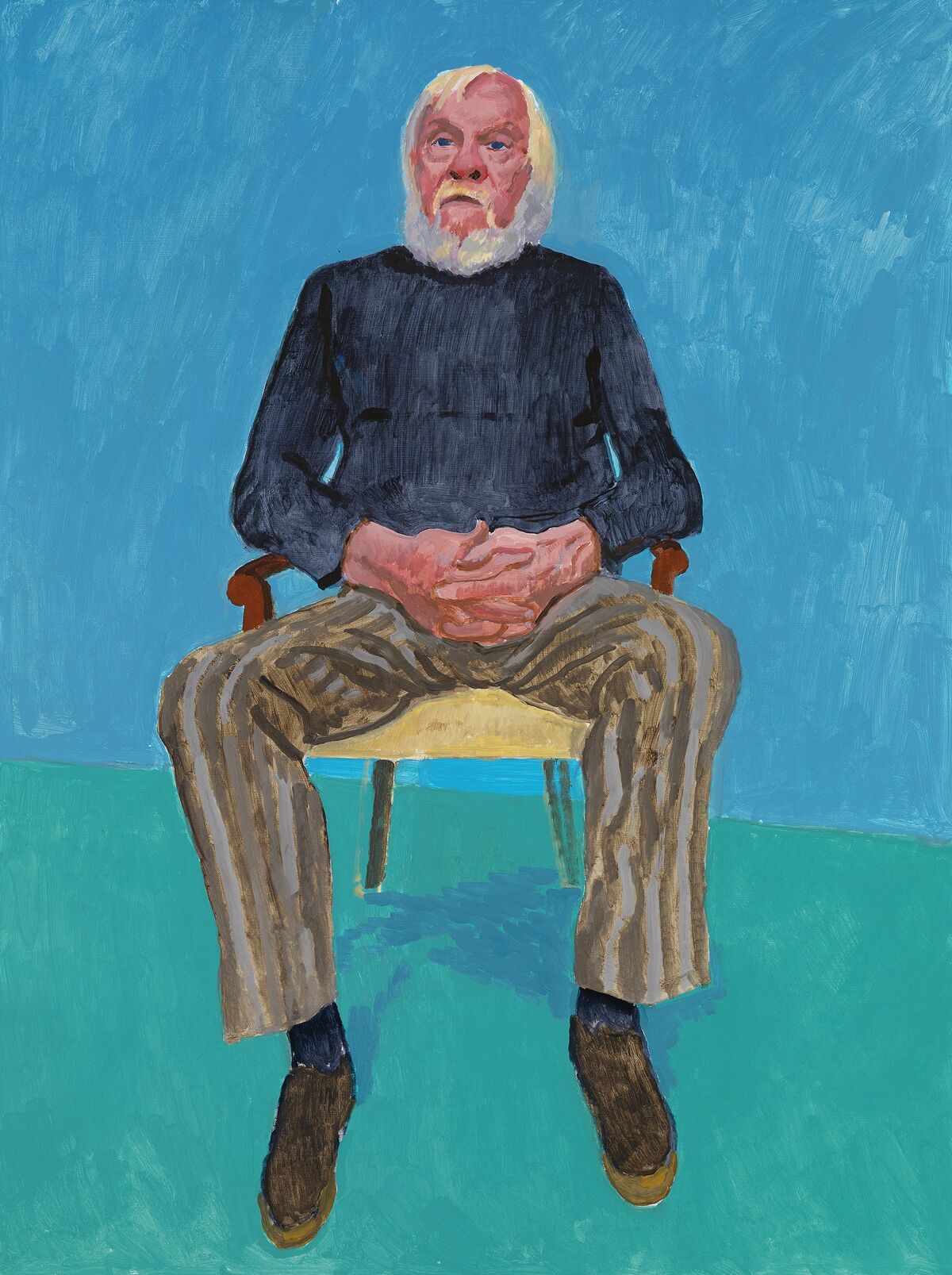 The subjects in this show include gallerist Larry Gagosian, architect
Frank Gehry
, and fellow artist
John Baldessari
, in addition to less-recognizable figures. Though he generally paints friends and acquaintances, Hockney opted to render a near-stranger for this series: the 11-year-old son of artist
Tacita Dean
, who was making a film about Hockney at the time. Altogether, these works depict a colorful community of mostly creative practitioners who are—in more ways than one—sitting pretty.
Beyond the LACMA show, Hockney has enjoyed a long year of heightened institutional appreciation. In 2017, a massive, career-spanning retrospective traveled to the Metropolitan Museum of Art, Tate Britain, and the Centre Pompidou in Paris. This past month, New York’s Pace Gallery closed an exhibition of Hockney’s recent paintings, which coincided with a solo presentation of his iPad and iPhone prints at Frieze New York. And just last week, Sotheby’s sold his large-scale oil painting Pacific Coast Highway and Santa Monica (1990) for $28.5 million—his highest auction price to date.
Hockney began his long, multimedia career back in the early 1960s, when he graduated from the Royal College of Art. A major contributor to the
Pop art
movement, he’s since embraced photography and new digital technology; his virtuosity across formats is paying off now more than ever. 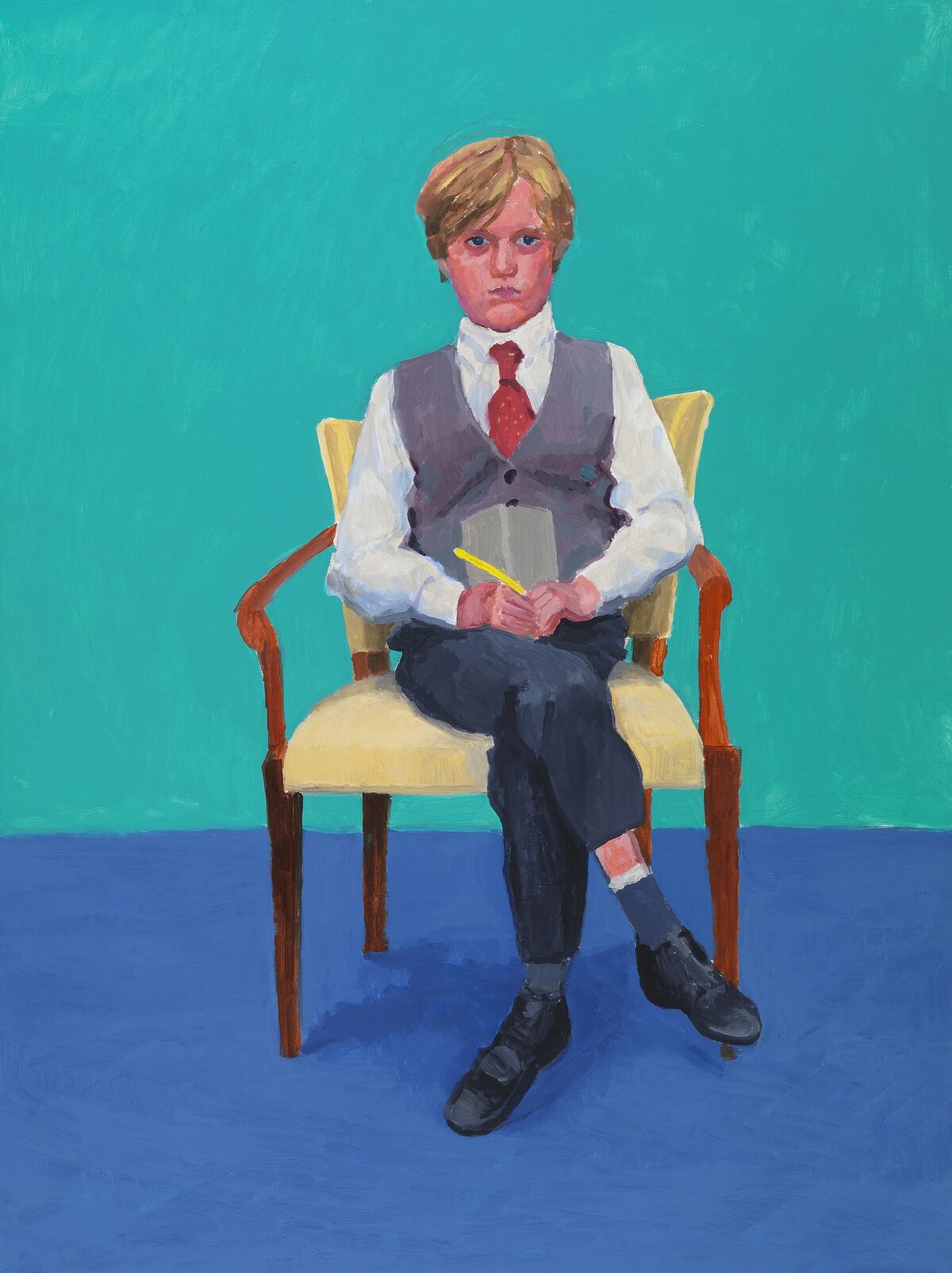 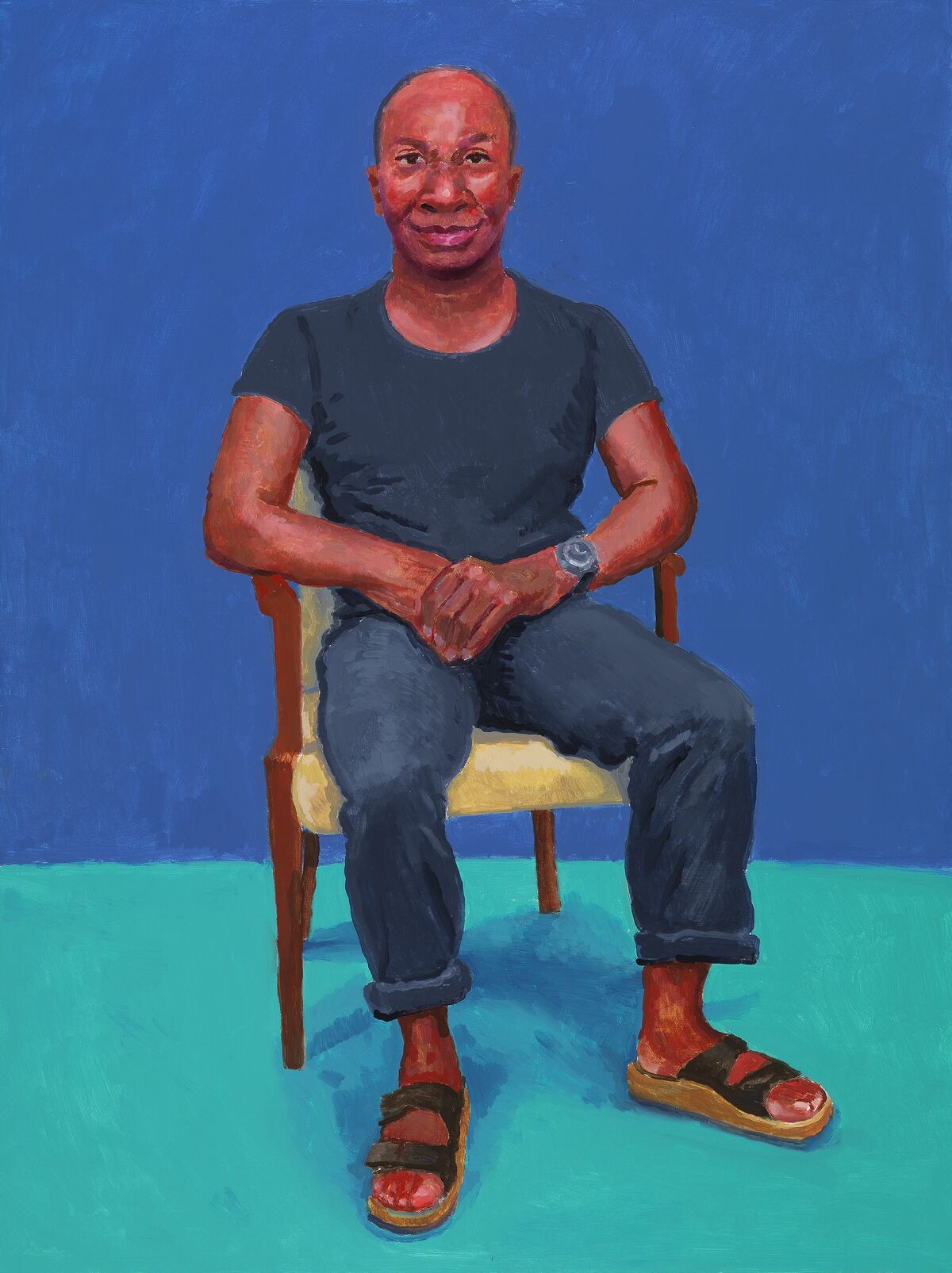 Advertisement
If the sheer volume of Hockney artworks—and his willingness to experiment with Apple products—runs the risk of turning his name into something of a brand, Corcoran described a more intimate side to the artist. She remembered meeting him in the late 1960s through a mutual friend, art dealer Nick Wilder. “He has a lovely sense of humor. He’s unashamed of being interested in beauty,” Corcoran said of Hockney. “He’s informed about painting, professorial in conversations, and manifests a sincere curiosity, but doesn’t try to be sophisticated.”
LACMA curator Stephanie Barron has also known Hockney for decades, and has served as his model for previous bodies of work. The first time she sat for him, as far as she can remember, was in the 1980s, when the artist had a small beach house in Malibu (he now works up in the Hollywood Hills). She posed for one of his camera lucida drawings—for which he used the centuries-old optical device, a precursor to contemporary cameras, to project sitters’ likenesses and draw atop the results—as well as a portrait, back when Hockney was working with a photocopier to make prints.
Indeed, Hockney’s renderings of Barron offer a cursory glimpse of just how expansive his practice has been. “My only hesitation was [that] I knew it was a three day commitment,” she told Artsy. “How do you handle being scrutinized by one person for three days? That was my only fleeting concern. It was quickly taken over by the honor of being asked.” 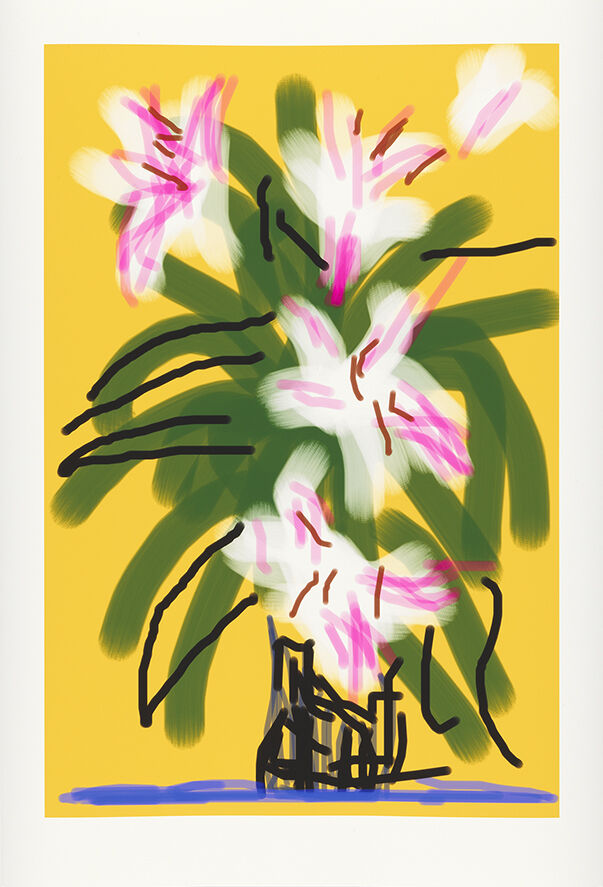 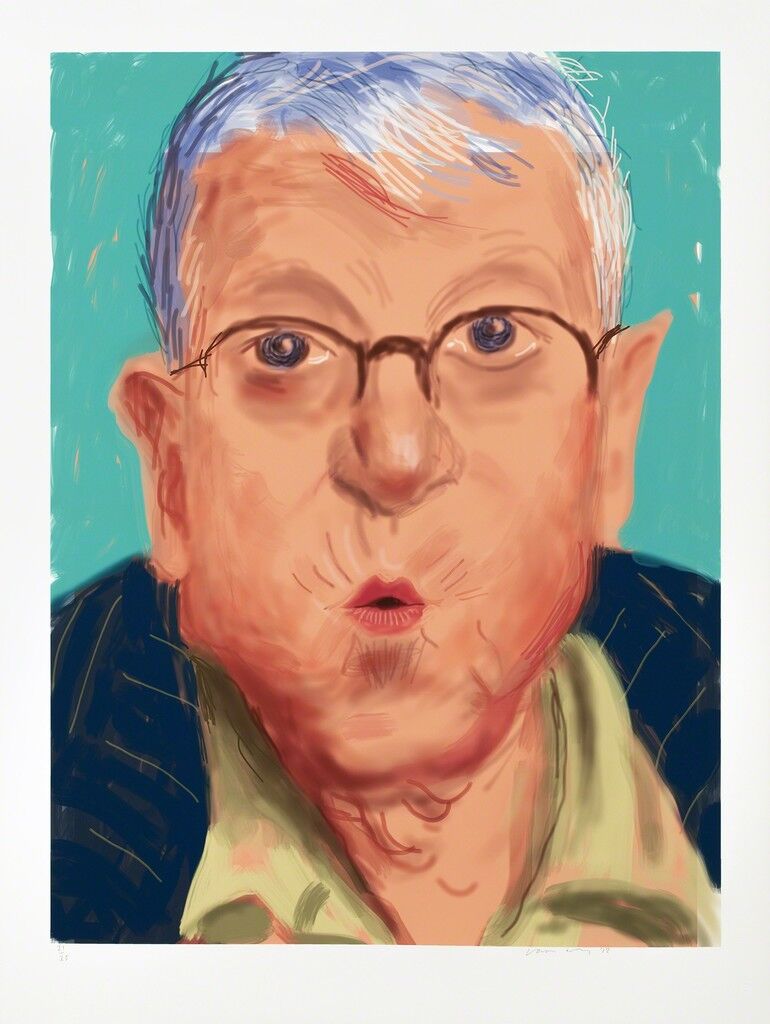 David Hockney
Self Portrait IV, 25 March 2012, 2012
Galerie Lelong & Co.
Barron recalled picking a pose she thought she could keep: She didn’t want to cross her legs because that would get tiresome. Instead, she placed her hands on her knees. While the first day was a thrill, the second was more physically difficult (plus, Barron notes, you have to wear the same outfit three days in a row). There’s blue tape on the floor to mark where the subject must put her feet. Hockney used to play classical music in his studio, she said, but now that he’s nearly deaf, the room remains silent.
“He starts with charcoal,” Barron explained. “That’s when it’s the most spontaneous. Before the first break, he’d already sketched the head and position of the body. Then he starts right away with the paint. Even before the first break he’d started on my red tunic, the face and hair. The face and hands he kept returning to everyday.”
Corcoran remembered Hockney’s interactions with his assistant Jean-Pierre Gonçalves de Lima, known as JP, as a kind of choreographed dance. JP observed Hockney’s progress, giving him new paints when he needed them. Jars of water, both dirty and perfectly clear, sat on long cabaret tables for when Hockney needed to wash his brush. The artist took midday breaks to rest or smoke or lunch. Barron recalled discussing books and articles they’d read and people they’d seen.
And what does one eat when sitting for a David Hockney portrait? “I think we probably had chicken pot pie,” Corcoran recalled. “Either chicken pie or fish pie, you know, with the mashed potatoes around it. It’s very simple and very good.” The biggest reward, of course, wasn’t the food, or even the honor of being a subject: It was the opportunity to watch one of today’s most inventive living artists at work.
Alina Cohen
Related Stories