Six Earth years ago, Curiosity made her spectacular landing on Mars, starting her mission to find evidence that the red planet could have once hosted microbial life. Some 13,500 viewers tuned in to watch the unmanned rover’s nail-biting descent, which required the Mini Cooper-sized vehicle to perform maneuvers that had only been tested in computer simulations. She needed to slow down from 13,000 miles per hour and touch down, unharmed, inside the Gale Crater.
Curiosity’s resilience has been a hallmark of her expedition, blowing past the expected two-year mission length to continue to send us fascinating information today about our mysterious celestial neighbor. The rover’s 17 cameras—which range from eight black-and-white, obstacle-avoiding Hazcams to her selfie-happy, high-resolution MAHLI camera—are instrumental to navigating, investigating, and documenting her surroundings on Mars.
Questions aside about whether or not a robot can take aesthetically pleasing photographs, Curiosity, directed by a team of NASA scientists, does capture imagery that is both critical to NASA’s work and intriguing for casual stargazers. And, like a professional image-maker, the rover-slash-photographer has a post-production team at NASA that composites her captures to show wider views of the planet (though Curiosity’s Mastcams can automatically stitch 150 images into a panoramic view).
Curiosity’s findings so far have resulted in breakthroughs in showing us what water on Mars would have looked like billions of years ago. A month after landing, she documented three sites on the planet where gravel in exposed bedrock was likely once transported through tumultuous streams—a conclusion that was made based on the roundness of the stones. Her photos have also revealed that the Gale Crater, once a lakebed, likely went through dry periods where the water receded. And just this past June, thanks to her investigation, NASA announced that the ancient lake once contained complex organic molecules. The rover has also confirmed the presence of methane in the air, which, because of the molecule’s lifespan of only a few hundred years, means there must be an ongoing source, most likely deep under the planet’s surface. 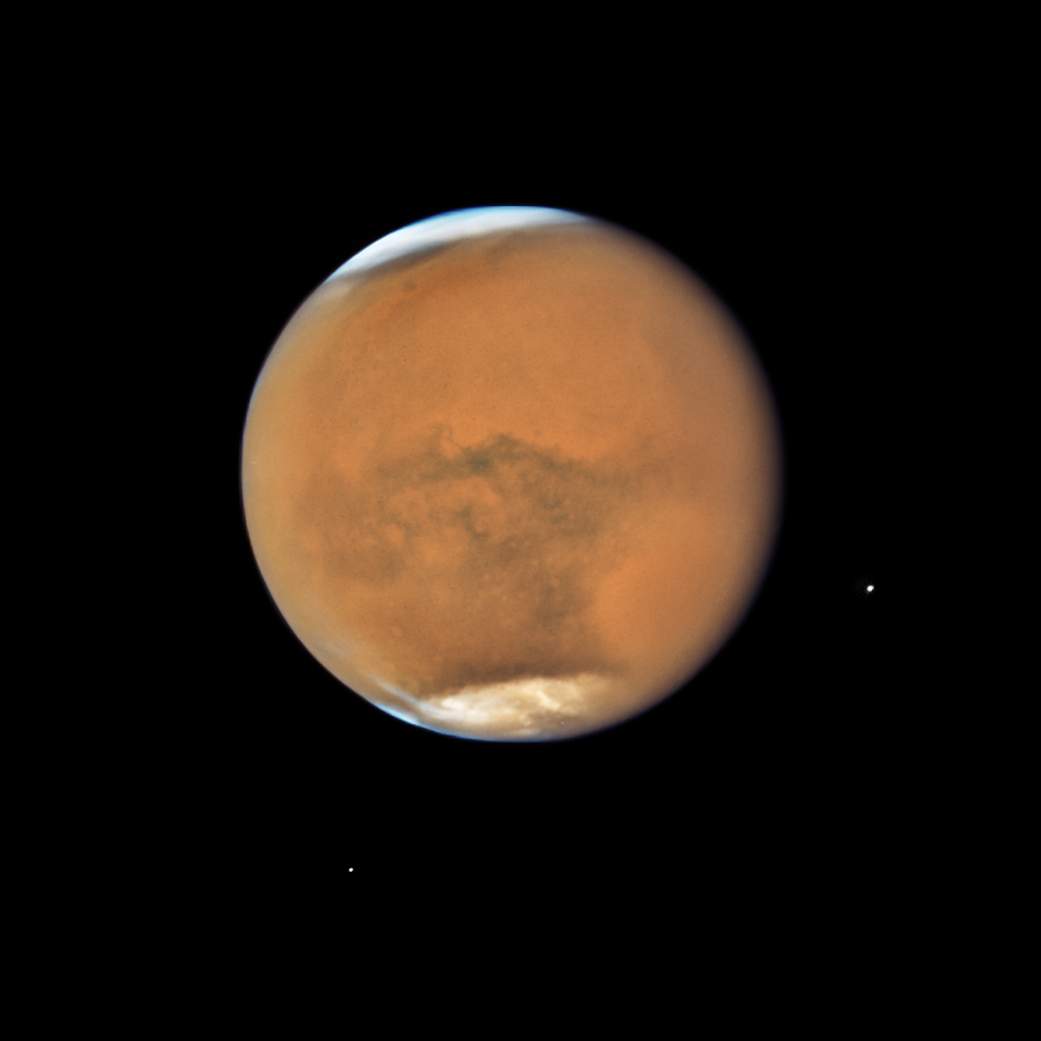 “It’s incredibly exciting, because it shows that Mars is an active planet today,” said Caltech planetary scientist and Mars expert Bethany Ehlmann, in a National Geographic article from June, about Curiosity’s molecular findings. “It’s not cold and dead—it’s perhaps hovering right on the edge of habitability.”
So far, Curiosity has only traversed a little over 12 miles to make these discoveries, journeying five miles from the Bradbury Landing point to the base of Mount Sharp, which is located centrally in the Gale Crater. In September 2014, she began inspecting the lower level of Mount Sharp, and today, she continues to sample its rocky layers as she makes a slow ascent. NASA investigators hope that Curiosity will reveal through these samples how the planet’s climate has changed. And despite an active six-week global dust storm that has entirely altered Mars’s appearance, the nuclear-powered rover has persevered (her solar-powered sibling, Opportunity, has been put to sleep), sampling and documenting the Vera Rubin Ridge, where she is currently located, looking for soft rocks to drill.
For those who want to keep tabs on the little rover that could, NASA continues to provide regular updates on Curiosity’s path and activities, as well as new additions to her image gallery. For the more dedicated fandom, as well as robotics teachers looking to bring Curiosity to the classroom, engineers from NASA’s Jet Propulsion Laboratory (JPL) have just released the Open Source Rover, a smaller Curiosity-inspired rover that anyone can build (though it will cost about $2,500 to do so).
Until a successful manned mission to Mars is undertaken, NASA scientists will continue to rely on rovers like Curiosity to send back data and images. Curiosity is helping to plan for those future trips, measuring how much radiation a human explorer could expect to be exposed to during a round-trip expedition (her findings show that an 860-day trip will radiate a human slightly more than the lifetime limit that the European Space Agency has implemented for its astronauts). For now, we have Curiosity’s photographs; some pivotal images from the past six years are listed below. 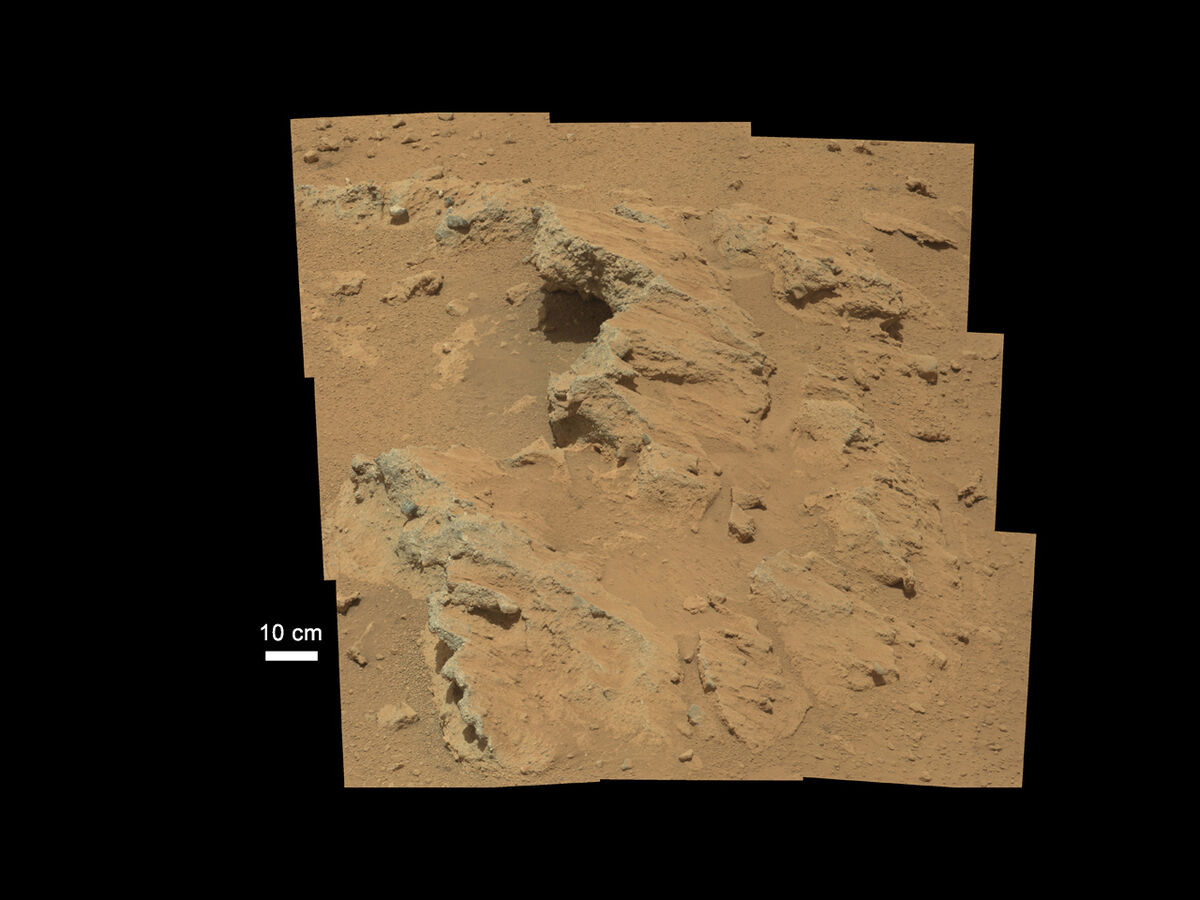 Advertisement
Named after Canada’s Hottah Lake, Curiosity took this photo of bedrock—likely exposed and tilted due to a meteorite impact—using its Mastcam telephoto lens on September 14, 2012 (or Sol 39, Mars’s 39th solar day). NASA scientists believe the round gravel pieces cemented in the sedimentary conglomerate were carried by water flow akin to a desert flash flood on Earth.

This 111-image panorama, photographed with Curiosity’s Mastcam on December 24, 2012 (Sol 137), shows Yellowknife Bay, a geological depression within Gale Crater, with Sheepbed mudstone in the foreground. The rocks reveal the ancient lake and stream deposits that signify that this area could have once supported microbial life. 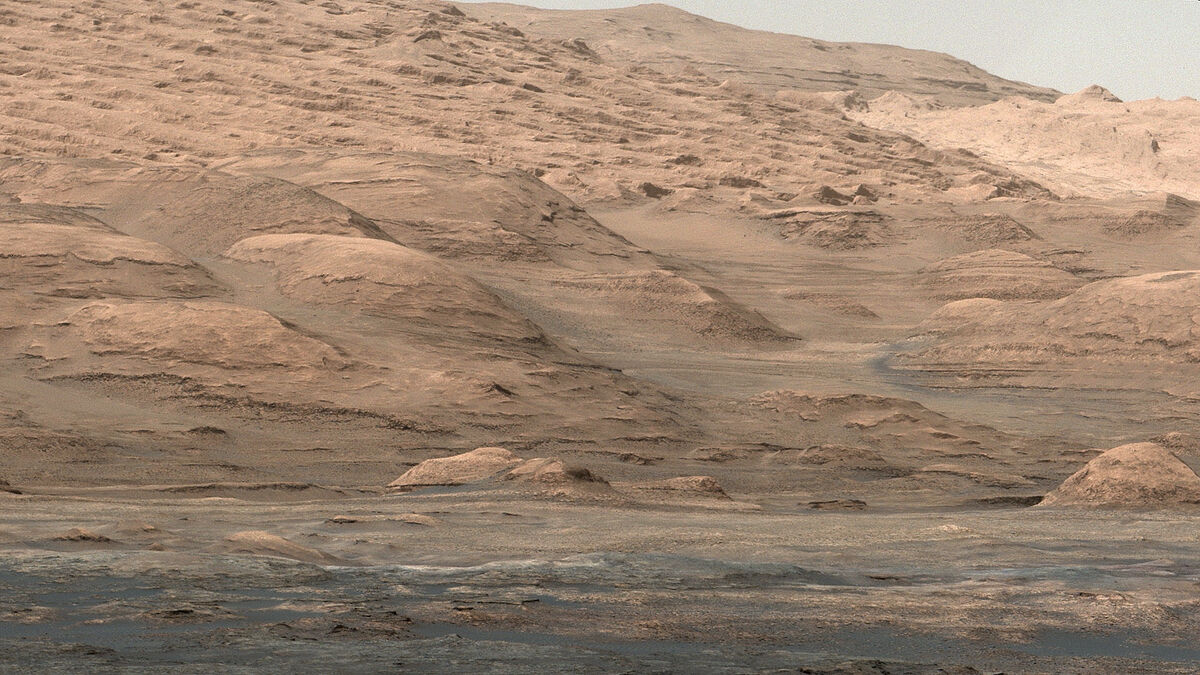 The buttes and layers near the base of Mount Sharp can be seen in this composite, created with images photographed on September 7, 2013 (Sol 387). The colors were adjusted to the daytime lighting of Earth, though some tint was left to show the effect of Martian dust in the air.

Strata at Mount Sharp Base

Strata at Mount Sharp Base, 2014. Photo by Curiosity. © NASA/JPL-Caltech/MSSS.

The strata—layers of rocks of the ground—in this panorama, photographed by Curiosity from the Kimberly formation on March 25, 2014 (Sol 580), is pictured dipping toward the base of Mount Sharp. According to NASA, this indicates that water once flowed toward a basin before the greater part of Mount Sharp was fully formed. This image was white-balanced to help geologists study the strata.

Downwind Side of Namib Sand Dune 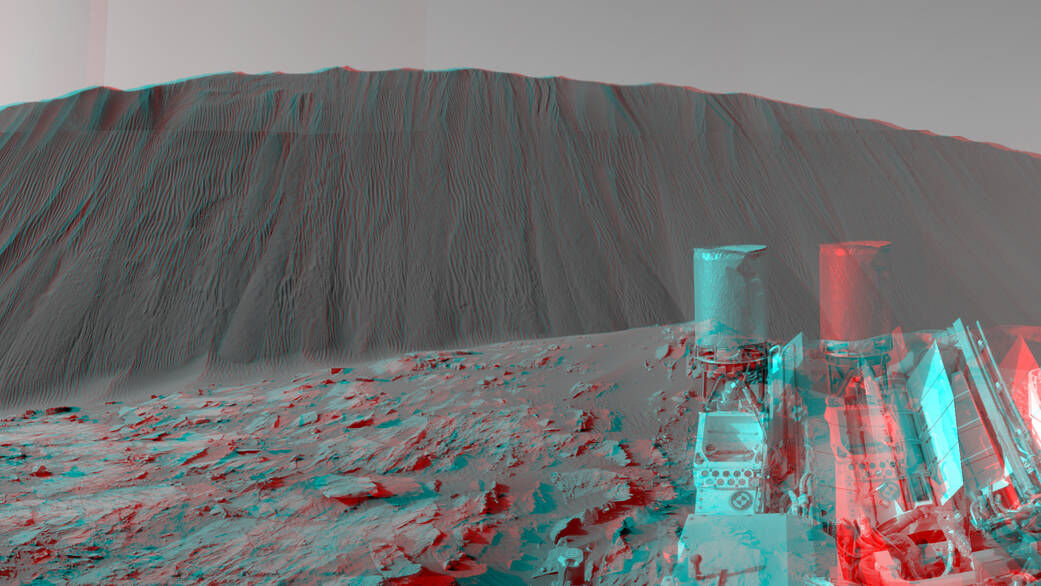 Downwind Side of Namib Sand Dune, 2015. Photo by Curiosity. © NASA/JPL-Caltech/MSSS.

This stereogram, which can be viewed in 3D with red-blue glasses, shows the downwind side of the 13-foot-tall Namib Sand Dune, located in the Bagnold Dunes, photographed on December 17, 2015 (Sol 1,196). The Bagnold Dunes have been observed to move up to one yard per Earth year due to Mars’s wind. Like on Earth, wind-facing dune surfaces ripple while the downwind side, sheltered from the wind, forms a steep slope called a “slip face.”
Curiosity Selfie in Murray Buttes 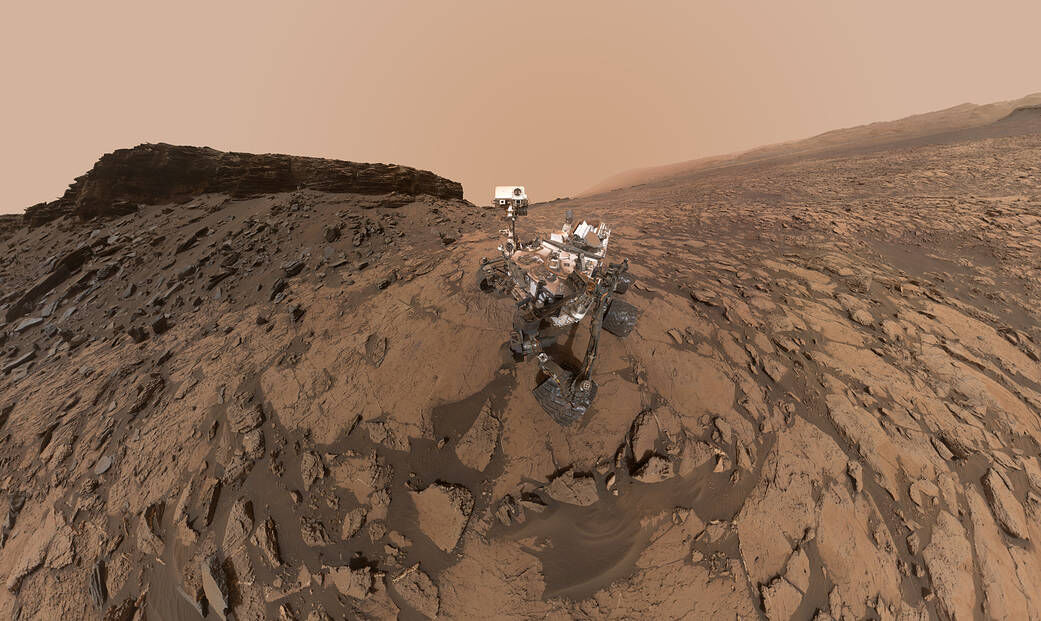 Curiosity snapped the 60-odd images in this selfie composite with the MAHLI camera on September 17, 2016 (Sol 1,463) and September 20, 2016 (Sol 1,466) while drilling at the Quela site in Murray Buttes, located on lower Mount Sharp. In the scene, the darker M12 mesa, which is 23 feet higher than the rocks behind Curiosity, can be seen in the distance.

On December 20, 2016 (Sol 1,555), Curiosity took these composited photos at Squid Cove that show polygon shapes on mudstone that may have been cracks drying in the mud over 3 billion years ago. The formations support the theory that the Gale Crater lake may have undergone drying periods. Taken with the Mastcam, the image was white-balanced to the lighting conditions of daytime Earth. 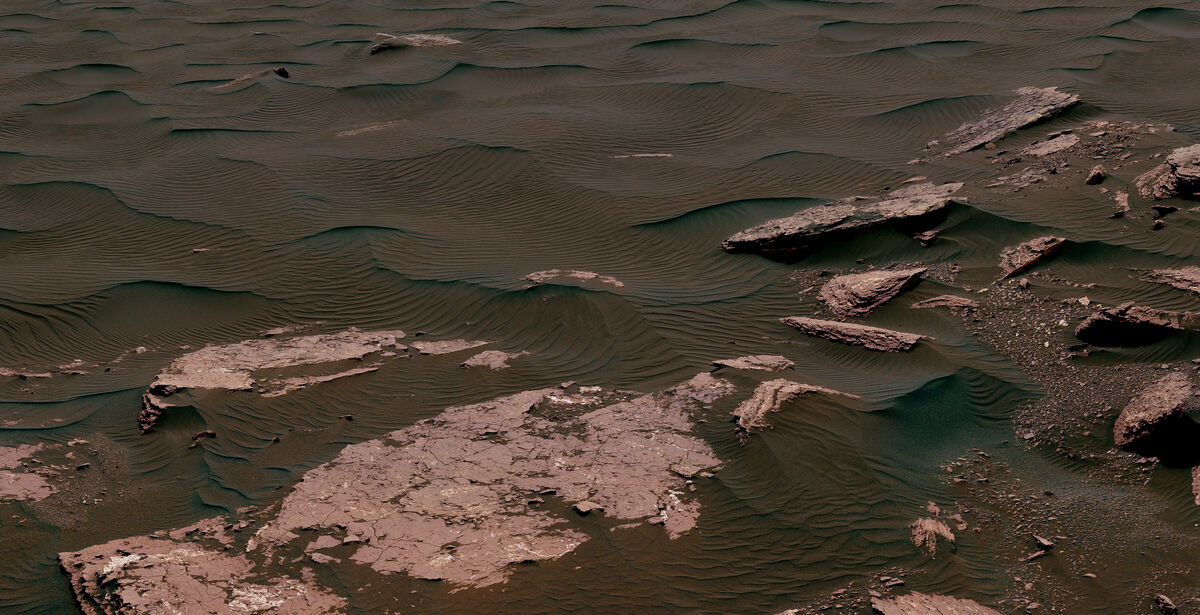 Photographed over March 24 and 25, 2017 (Sol 1,647), at Ogunquit Beach, this white-balanced scene of the Bagnold Dunes, taken from a 360-degree panorama shot with Curiosity’s Mastcam, shows dark sand ripples with crests several feet apart, much wider than what has been observed in sand dunes on Earth. Overlaid on the wider ripples, smaller ripples, with crests around 10 times closer together, can be seen. Bedrock from the Murray formation, which was once lakebed sediment, is visible in the foreground, as well as gravel on the right.

Duluth Drilling Before and During Dust Storm 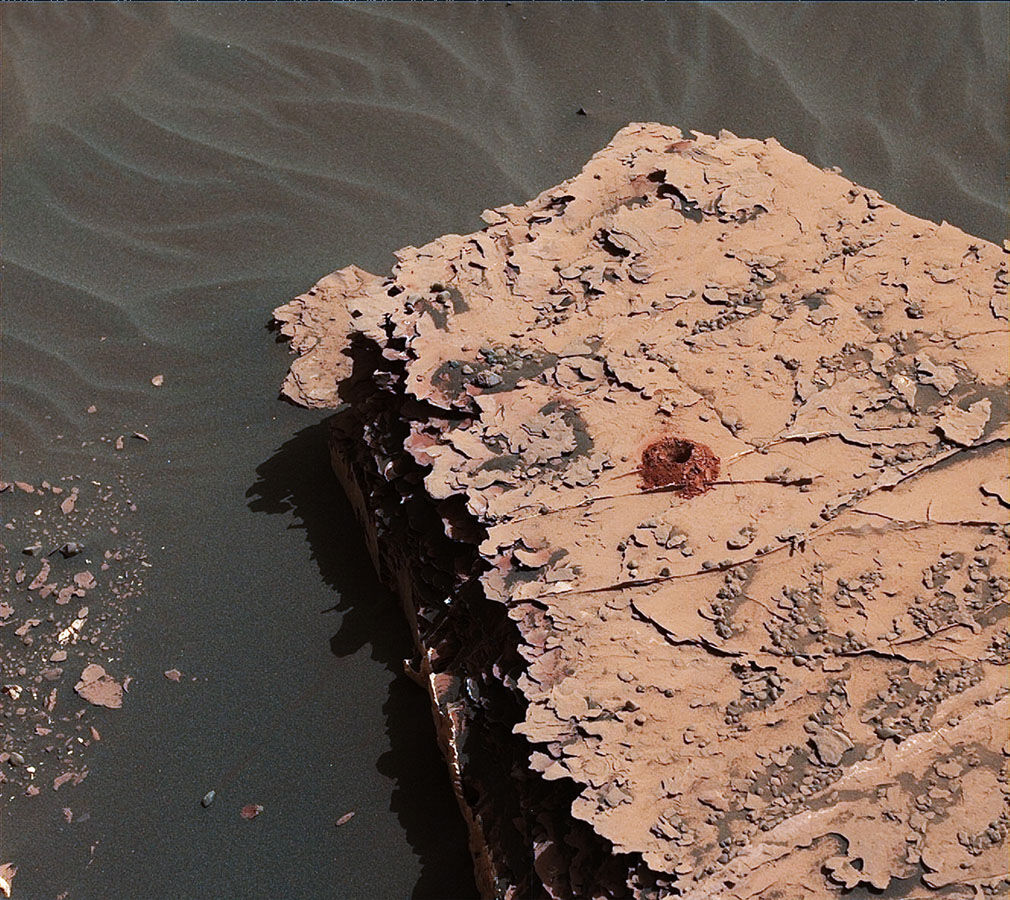 This site marks the first location where Curiosity was able to drill after engineers spent more than a year trying to fix a damaged motor, resulting in a new drilling technique called Feed Extended Drilling (FED). The 2-inch-deep hole was photographed with Curiosity’s Mastcam on May 21, 2018 (Sol 2,058), and again on June 17, 2018, during the global Martian dust storm. The bright red color of the dust-storm image is due in part to the longer exposure required to take the image, but primarily because of the green- and blue-light-blocking dust cloud.
Jacqui Palumbo is a contributing writer for Artsy Editorial.
Related Stories 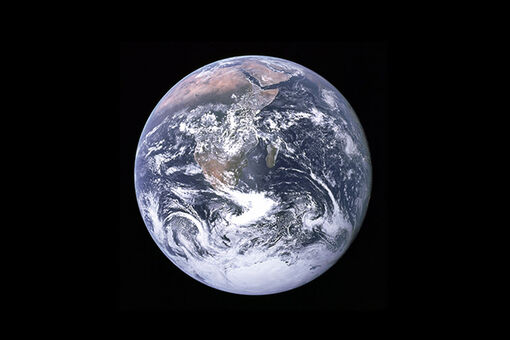 We Only Had One Photograph of the Entire Earth—until Three Years Ago
Haley Weiss
May 18, 2018