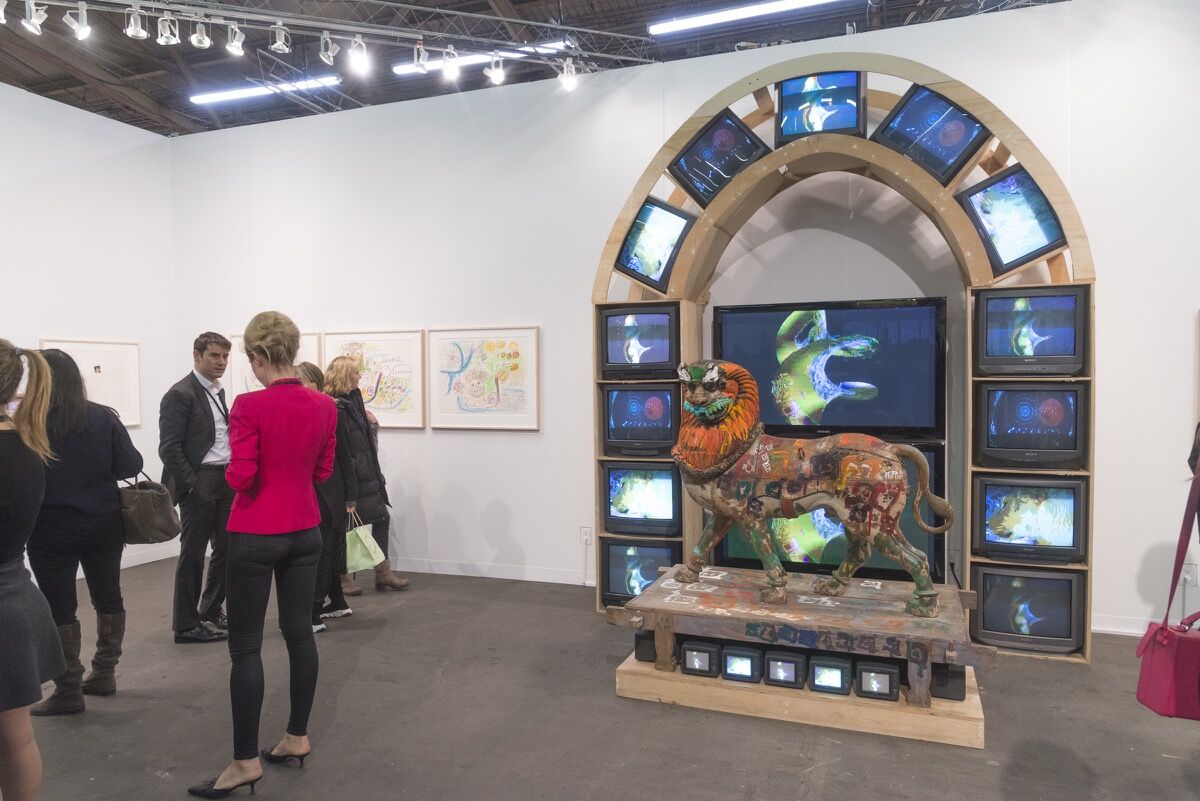 Installation view of Gagosian’s booth at The Armory Show, 2018. Photo by Adam Reich for Artsy.

Despite a vigorous snowfall that beat steadily down upon New York City all day, collectors made the journey to a remote strip of highway on Manhattan’s West Side to attend Wednesday morning’s VIP preview of The Armory Show, the first stateside test of the art market in the new year. While some out-of-towners may have been stuck at home due to cancelled flights, there was still a crush of VIP cardholders squeezed into the entrance, waiting to get through the gates as soon as the clock struck noon.
Sales were leisurely at the outset, but enough work changed hands to suggest the market is stable, despite the volatility of the weather and the equity markets so far this year.
“The weather isn’t on our team, but we’re doing pretty good here,” said Johann König, whose König Galerie had sold
Katharina Grosse
’s vividly colored painting o.T. (2017) for €140,000 ($173,000), and a gigantic
Erwin Wurm
bronze—a giant red suitcase walking on human legs—also for €140,000.
For König, a longtime devotee to The Armory Show, the fair represents a way to stay tethered to New York without splurging on a brick-and-mortar space here. König Galerie is based in Berlin, and last October debuted a space in London, but has no plans to open in New York. 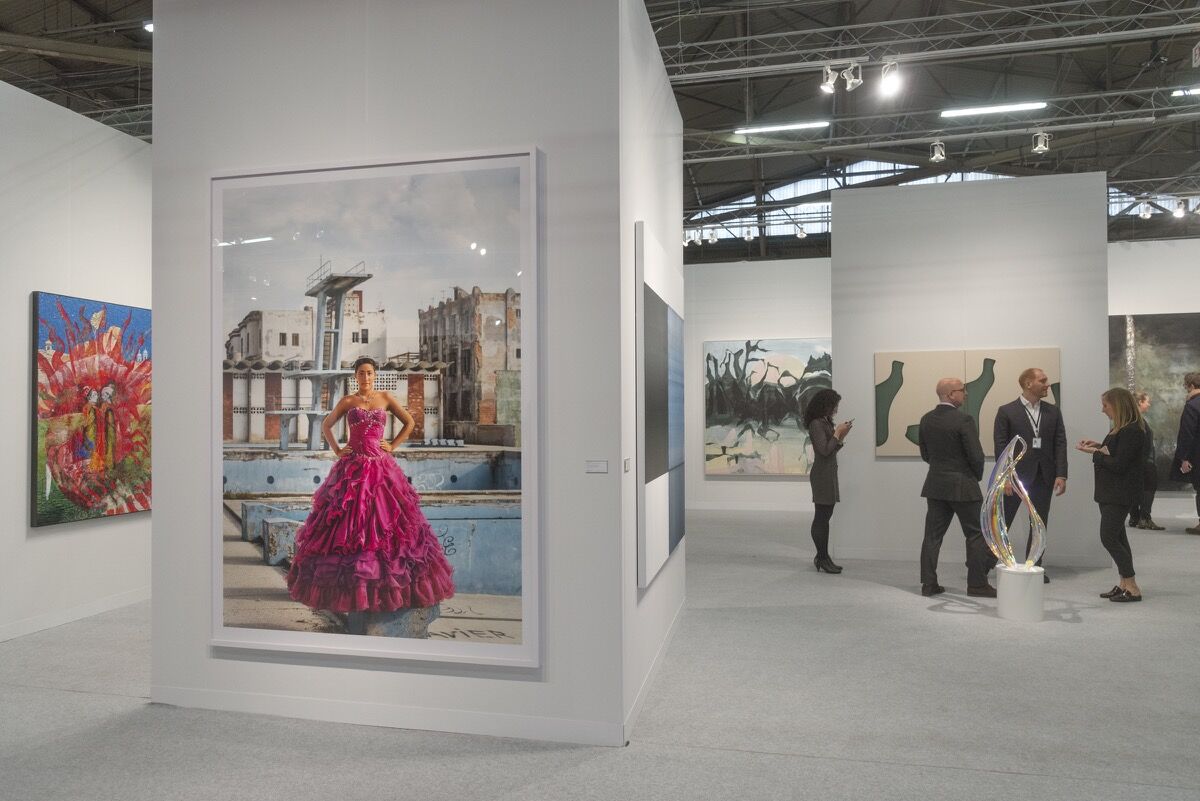 “I’ve been doing Armory for a long time, and it’s because of New York collectors—they come, they come, they come multiple times,” throughout the fair’s duration, König said. “It’s not even so much American collectors—just New York collectors.”
Other dealers said The Armory Show is also a chance to connect with collectors who fly in from elsewhere in the country, many of whom were stuck due to the freak blizzard.
“We had a group of collectors from Boston who got held up, but they’ll come tomorrow,” said Alex Logsdail, a director at Lisson Gallery. The London-based gallery now has two locations in New York, but isn’t yet a member of the Art Dealers Association of America (ADAA), so they focus on the Armory. This year, they sold
Tony Cragg
’s wt (extended) (2016) for £385,000 ($477,960),
Carmen Herrera
’s Cadmium orange with blue (1989) for $600,000, and
Laure Prouvost
’s The Hidden Paintings Grandma Improved - We Are Coming Out (2017) for £30,000 ($37,200).
If anyone was missing in action, Sean Kelly hadn’t noticed. He said that The Armory Show is consistently one of the best fairs for his business, year after year.
“We’ve been packed,” he said. “The volume of people and people coming back everyday—it’s one of the most successful fairs we do.” 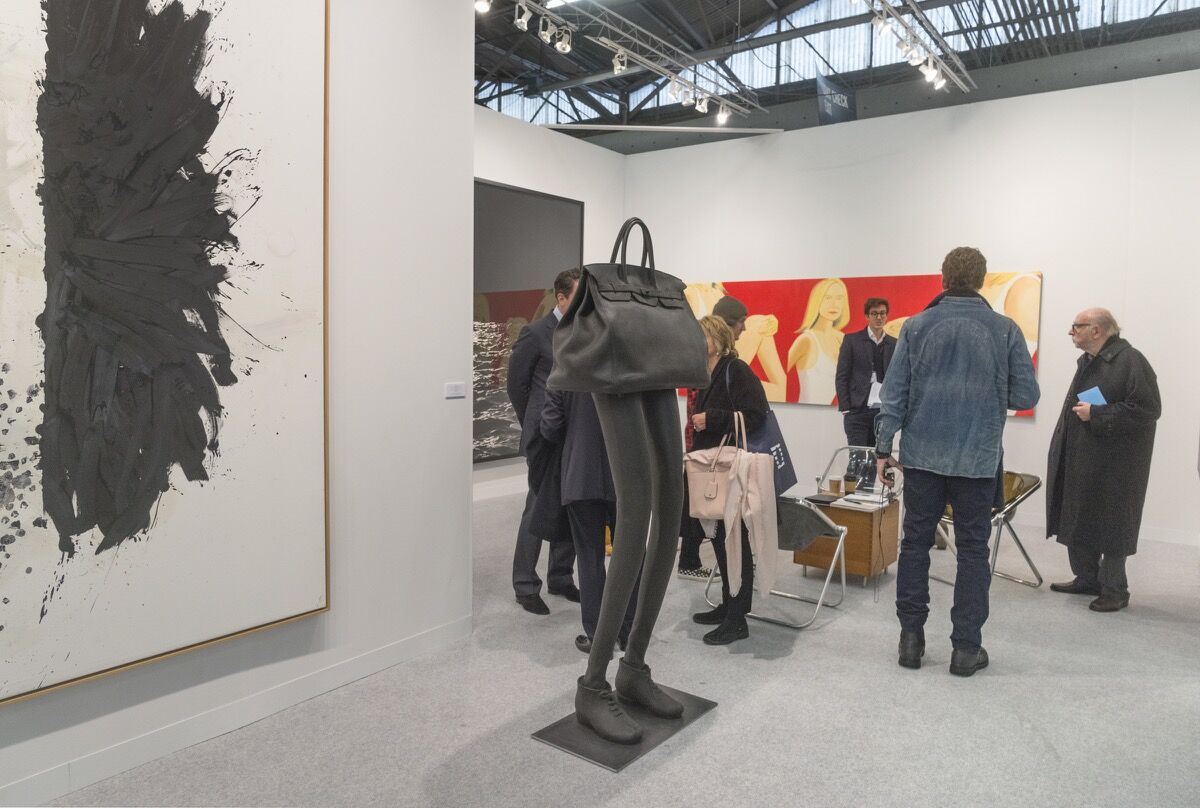 Advertisement
His booth, just by the fair’s entrance, featured a brand new portrait by
Kehinde Wiley
, fresh from the studio, “the first one he did after the portrait of Obama,” Kelly said, beaming.
Clearly, Wiley’s newfound fame will be a boon to sales—the painting was priced at $150,000, which is the same as his all-time auction record, and sold within minutes of the fair opening. He also sold a work by
Hugo McCloud
for $65,000, a work by
Sam Moyer
for $50,000, and a work by
Shahzia Sikander
for $90,000.
But other dealers and advisors worried that sales were slower than in past years, and not just because of the weather.
“None of the big guys are selling, because they didn’t bring their best stuff,” said one advisor, who asked not to be named. “[The collectors] think the galleries are waiting for Hong Kong, and they’re saving their best material for that.”
Perhaps collectors found the pricing to be a bit off. Galerie Thaddaeus Ropac had two brand new, large-scale paintings by
Alex Katz
, priced at $500,000 and $550,000. And while someone had placed a hold on one, neither had sold by the early evening. (Sofia Coppola certainly seemed intrigued when she floated through the booth.) Katz’s market is hot but perhaps not at that range—a painting of a similar size sold at the Sotheby’s Contemporary Curated sale last Friday for $200,000 against a $90,000 high estimate.
And Gagosian, lured back to the fair for the first time since 2013, may have similarly overestimated the appetite for big-ticket works, as its glorious solo booth of
Nam June Paik
included a 2005 work that had been hidden away since his death in 2006—TVs cresting to form an arch over a lion strutting atop a platform. 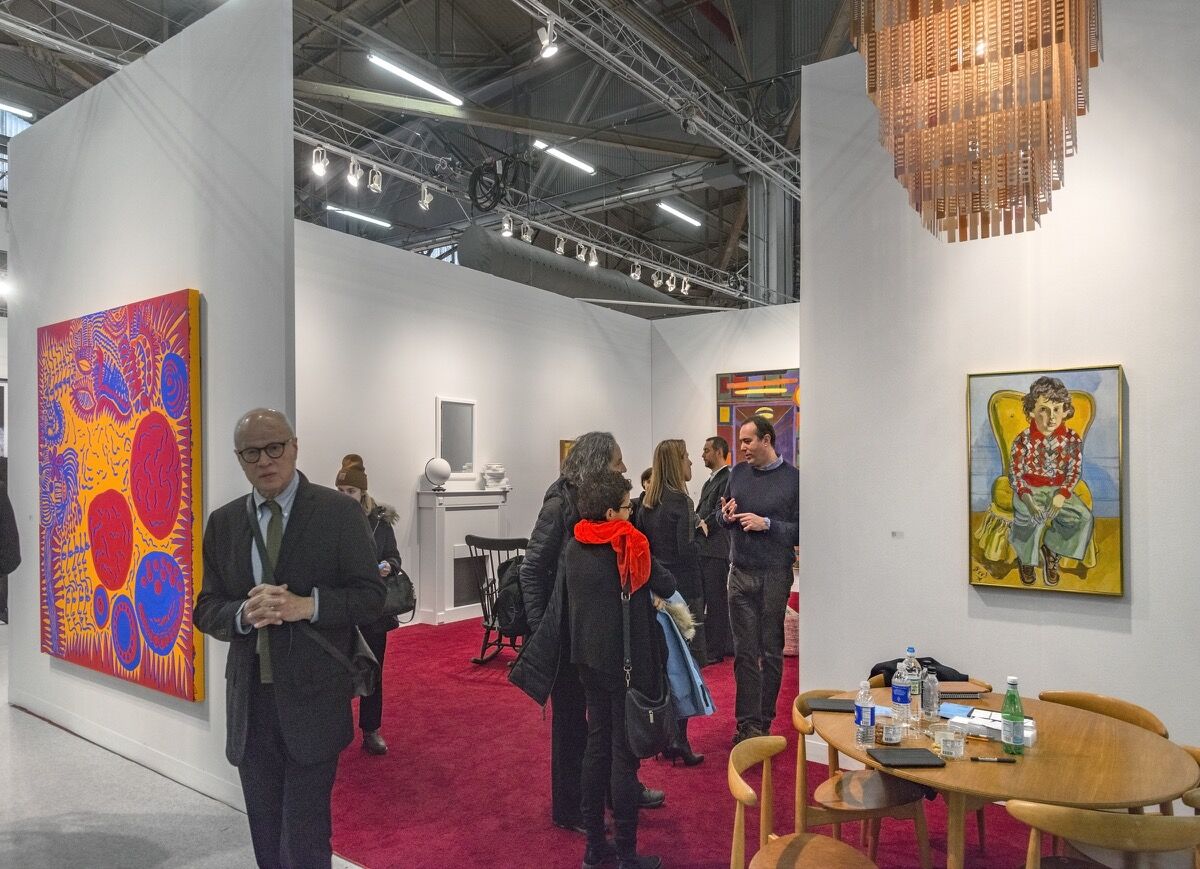 Installation view of Victoria Miro’s booth at The Armory Show, 2018. Photo by Adam Reich for Artsy.

The centerpiece is a treasure, for sure, but Gagosian wasn’t able to sell it by the end of the first day. It seems collectors were slow to come around to a $1.5 million price tag at a fair where, in general across all galleries, work is usually more moderately priced.
“That doesn’t seem to be in line with Nam June Paik’s auction history,” said a former auction specialist, who is now an advisor.
The top price for a work by Paik at auction is $646,897, recorded at Christie’s Hong Kong in 2007.
But sources at the gallery did indicate other, smaller works had sold, and it was one of the more talked-about presentations at the fair.
“The installation, performance and video-based strategies which seem to dominate the current contemporary art landscape are unthinkable without the profound influence of Nam June Paik,” Nick Simunovic—who is the director of Gagosian’s Hong Kong outpost, and put together the booth—said in an emailed statement. “At the same time, his work is too little known, especially in relation to his enormous stature.”
Victoria Miro, which has two locations in London plus one in Venice, also had an ambitious booth set up: The gallery decided to play house here at Pier 94, setting up “furniture” by
Elmgreen & Dragset
through a series of “rooms,” with stately paintings installed throughout.
“We decided to do a booth about the domestic,” said Glenn Scott Wright, director and partner at the gallery.
In the “living room” there are a few delightful
Milton Avery
paintings from the 1940s, as well as masterful portraits by
Alice Neel
and, through booth walls set up into a corridor, paintings by
Yayoi Kusama
. Collectors had put some of the work on hold, including two Averys and two Kusamas. The work tended to be on the more expensive side for the fair, with an upper limit of €800,000, and that may be why buyers had not yet pulled the trigger by Wednesday afternoon. 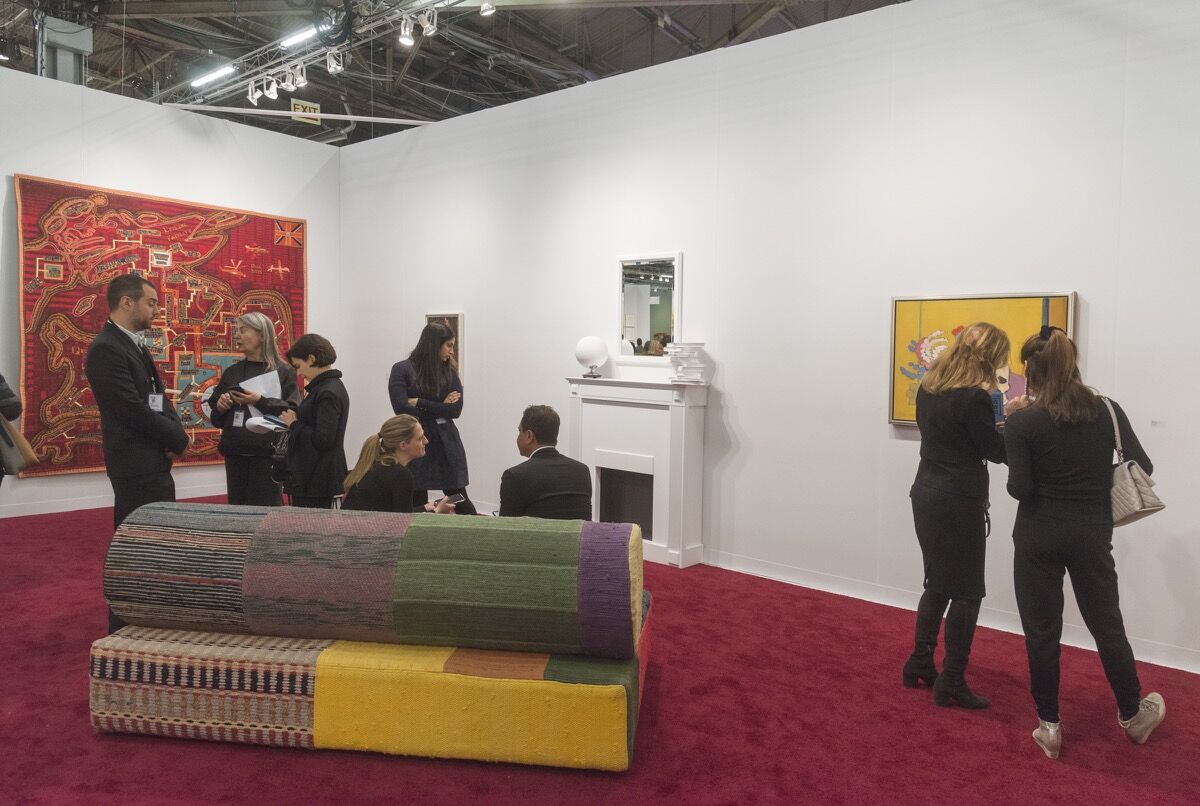 Installation view of Victoria Miro’s booth at The Armory Show, 2018. Photo by Adam Reich for Artsy.

But even if dealers weren’t closing at the show, they were buying elsewhere: Some could be seen on their phones, either watching or actively participating in the Sotheby’s Contemporary Evening sale in London, which started at 2:00 p.m. New York time. The auction ultimately raked in a very encouraging £109.2 million ($151.9 million) with a
Peter Doig
selling for £14.3 million ($19.9 million) and a
Christopher Wool
for £10.4 million ($14.4 million) over a £6.2 million ($8.6 million) high estimate. The prices achieved in London will only help spur on sales in New York, as more collectors start to come in as the week goes on.
Some of the most important collectors, to be sure, were already in town and present at the fair on Wednesday. Don and Mera Rubell, Susan and Michael Hort, Jill and Peter Kraus, Beth Rudin de Woody, Glenn Fuhrman, and Frank Moore showed up. Actor Paul Rudd was checking out the booth of Los Angeles stalwart Regen Projects, which signed a 15-year lease for its first New York space in Tribeca last September—founder Shaun Caley Regen said she hopes it will be open by the fall. Director John Waters was seen chatting with Artists Space director Jay Sanders. Actor, collector, and sometime-curator Steve Martin (who also authored a novel about the art world) zipped through the champagne lounge with black earplugs in.
And as is often the case, some artists were present to witness the selling of their creations.
Tara Donovan
watched as Pace Gallery sold the entire booth of her work, with prices between $35,000 and $65,000. (Though the giant work that filled the courtyard, an installation made of glass tubes that crests into a wave, had not sold as of Wednesday for its asking price of $450,000.)
Hank Willis Thomas
attended the show while his dealer Jack Shainman sold a giant screenprint of his on retroreflective vinyl for $55,000. The mysterious members of the anonymous collective
Bruce High Quality Foundation
were hanging around their first new public work in years: “Ways to Die,” a project series in the Platform sector that consists of 250 “self-portrait” collages.
But perhaps the most epic artist-is-present scene was at the booth of Marc Straus, which had a solo presentation of paintings by the 79-year-old co-founder of the
Viennese Actionists
,
Hermann Nitsch
. Nitsch is best known for a series of performances called “Orgien Mysterien Theater”—that would translate to “Orgy Mystery Theater”—which involves a lot of ritualistic sex and animal sacrifice and blood and guts. It gets protested a lot. Nitsch’s work at The Armory Show was also eye-catching, if not as controversial: blood-colored paint splattered on canvas, gory and glorious, but all contained to the wall and as far as we know not involving the harm of any animals.
And at the booth’s dead center was Nitsch himself, squatting on a chair in overalls and a bowler cap. Asked whether he enjoyed attending an art fair and watching his work get sold, he responded slowly and with a strong Austrian accent: “I’m just glad I don’t have to be here every day.”
Nate Freeman
Related Stories