What Sold at The Armory Show 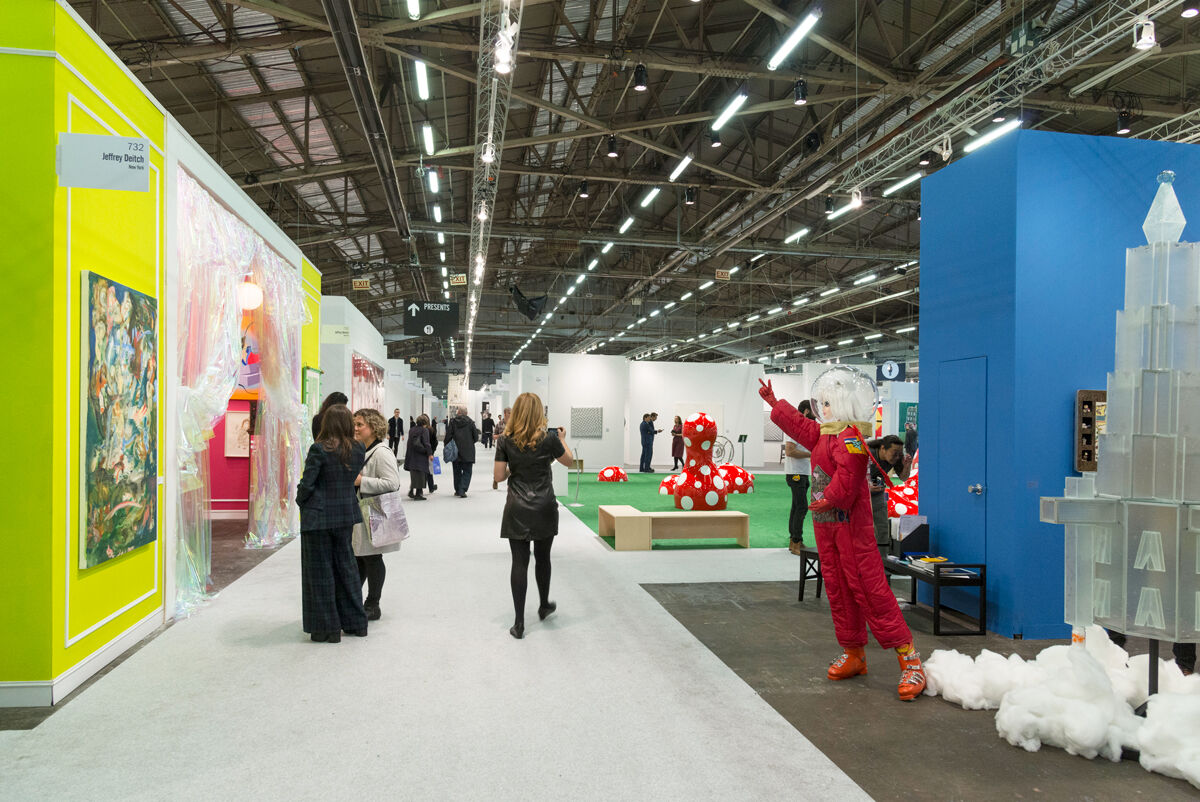 It was an Armory Show of many “firsts.” The first with the stamp of new executive director Benjamin Genocchio, the first major U.S. art fair under a president named Donald Trump, the first featuring catering by one of
Robert Rauschenberg
’s favorite Italian restaurants. But somehow all that newness against a backdrop of record stock market heights and unprecedented political mayhem, created a fairly ordinary sales picture.
Perhaps it was the push and pull of those two trends. Sure, a rising stock market creates a “wealth effect” that may induce the rich to spend, but many in the liberal-leaning art world are feeling just plain depressed. Dealers cited the endless stream of negative news as one potential deterrent to sales. It’s hard to get in the mood to buy, they said, while being constantly confronted by potential budget cuts to social programs and the National Endowment for the Arts, allegations of Russian malfeasance, and the like.
“If you always get bombed with negative news, why would you be in the mood to go buy luxury goods?” asked Stefan von Bartha of the Basel-based von Bartha gallery. “It’s great that the stock market is up and all of these things, but the general idea of your president, especially in Europe, is highly negative,” he said.
Sean Kelly, who reported selling out his booth several times over, acknowledged that the “horrible” political situation and strong economy made for “an odd dichotomy.” Still, he said, in his experience, times of political turbulence can create opportunities for dealers, as worried collectors seek solace in art.
“People often go into the art world in a more serious way, because they need beauty and intelligence in their lives,” said the gallerist. And he had much beauty and intelligence that sold, including two works by
Shahzia Sikander
, a video work that went for $150,000 and a work on paper for $120,000, as well as several smaller works on paper. He also sold a sculpture by
Antony Gormley
for £350,000, and a painting by
Hugo McCloud
for $40,000. The works moved so swiftly that he and his colleagues had to change out the inventory on both Thursday and Friday— although they left Sikander’s work up even after it sold, letting its hypnotic imagery draw in passersby.
“We sold an enormous amount,” he said. 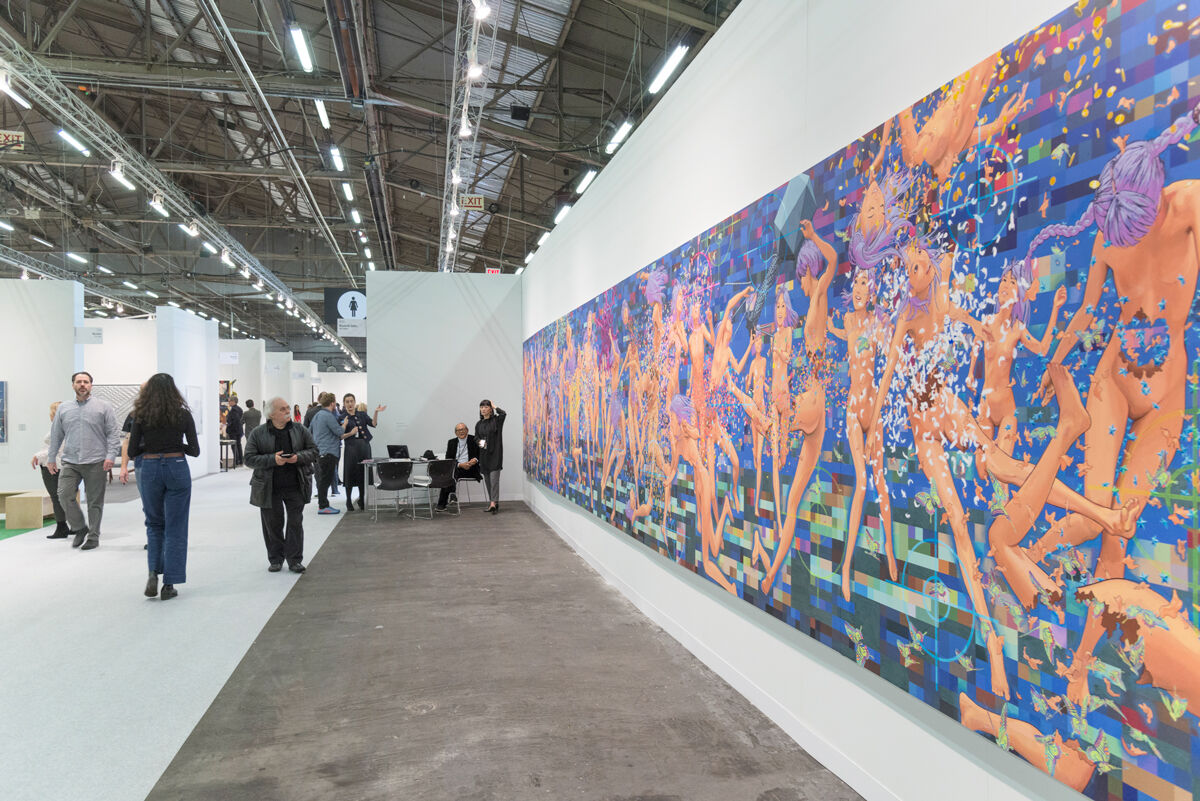 Installation view of work by Makoto Aida at Mizuma’s booth at The Armory Show, 2017. Photo by Adam Reich for Artsy.

Kelly had retained his prime location despite a significant reshuffle of the fair layout. But dealers were near-universally enthusiastic about the changes Genocchio had brought about for this year’s edition—as well as their sales results during The Armory Show’s five-day run, which concludes on Sunday. The fair this year welcomed 210 galleries from 30 countries, offering them a chance to connect with the large New York collector and art advisor base as well as the folks flying in from the West Coast and middle America. All told, it draws a public audience of more than 65,000 visitors.
Amidst that foot traffic, most dealers described the pace as “steady,” with many reporting at least one sale per day. It was enough to sustain morale but not drive them away from their booths in celebration of a first-day deluge of activity, something that was characteristic of major art fairs like The Armory Show until two years ago.
Von Bartha had taken a minimalist approach to his booth, with just six pieces on view.  “I was a bit nervous coming over here,” he said, but the gamble paid off, resonating with visitors and collectors, including two new clients for his gallery. A five-part painting by
Imi Knoebel
, Anima Mundi 26-5 (2016), sold for over $100,000, as well as another work by the German abstract artist.
He described this year’s sales pace as more sustainable than in previous years, when the market had been overheated. People were taking a bit more time to make their decisions, and sales were happening in bits and pieces, rather than in a rush in the opening hour. That made it more important for galleries to be intentional about what they bring and how they organize it.
“You have to focus more on what you want to do at the fair,” Von Bartha said. 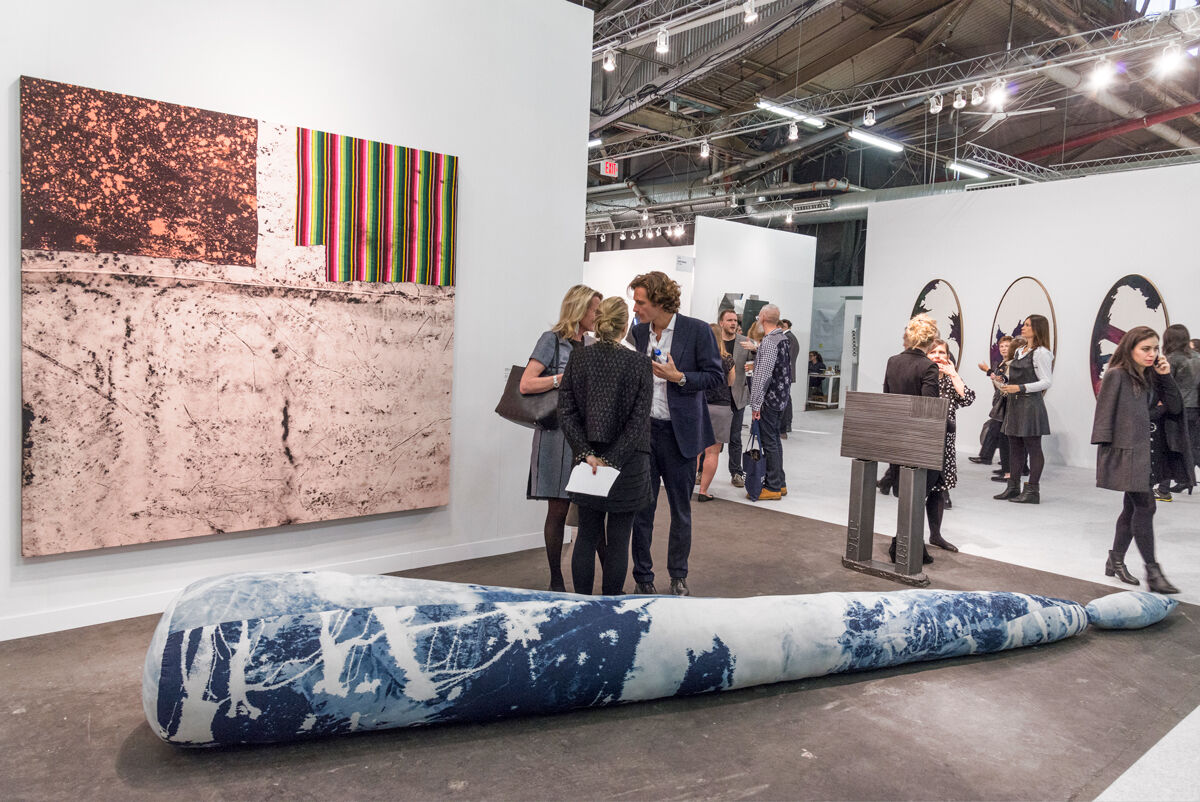 Installation view of Sprüth Magers’s booth at The Armory Show, 2017. Photo by Adam Reich for Artsy.

Advertisement
Los Angeles-based gallerist Anat Ebgi and her director Stefano Di Paola agreed that collectors had become more thoughtful about their purchasing, something they also said was a hallmark of the New York audience.
“It’s very intentional [at Armory],” Di Paola said, comparing it with fairs in Miami, for example, which he said can feel more like a buying frenzy. The gallery had sold half of the eight
Martin Basher
paintings they brought as of Friday, and said they were seeing people making return trips: coming back with their friends or advisors to take another look at a potential purchase.
“It’s a good, solid fair,” said Ebgi.
William Pym, director of London gallery Josh Lilley, called this year “terrific,” especially after a less robust 2016. It was the gallery’s eighth year at the fair, and he brought three paintings by a new artist, the 29-year-old Brit
Tom Anholt
. All three, plus four more paintings back in London, sold, he said, at between $5,000 and $15,000.
Many of the gallery’s artists are now pushing into the mid-career point in their trajectories, said Pym, and the gallery itself has matured from its earlier reputation as an incubator of emerging artists. This growth comes, however, at a time when the market is relatively soft, something which can put them in a bit of a bind when choosing what inventory to place on offer.
“We can’t take a risk with the top, top value works, $50,000 or above; our price point for this fair is $10,000 to $30,000,” he said. “That seems to be the level people like from us.”
A
Kathleen Ryan
sculpture sold for approximately $18,000, he said, and a difficult sculpture by another new artist,
Sarah Pichlkostner
, sold for $10,000. She had her first solo exhibition with Lilley in January. 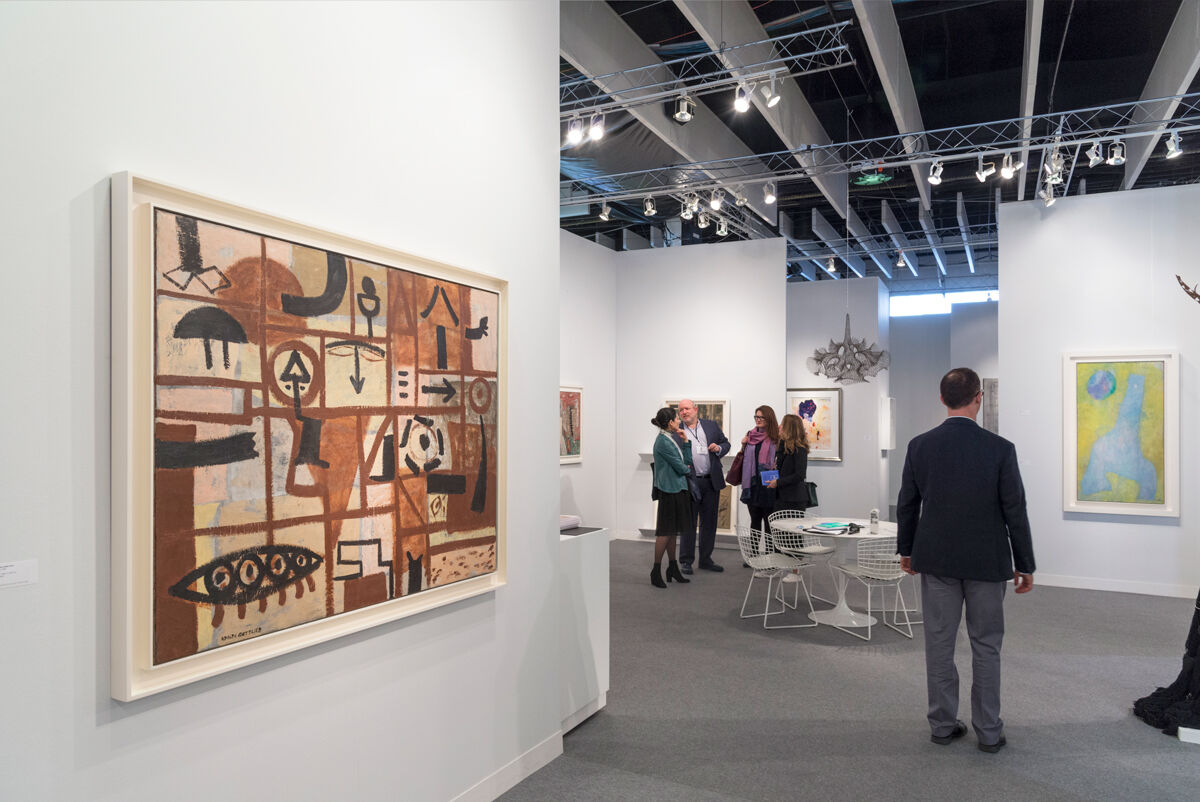 Dealers across the fair spoke in more businesslike terms than has previously been the case in the art world. With a number of prominent galleries having closed in recent months, dealers said that they are taking extra care in expenditure calculations (particularly with regard to fair attendance) in order to ensure they can continue to support their artists.
Polina Stroganova, director and senior gallery partner at Mexico City’s PROYECTOSMONCLOVA, said the decision to share a booth with London’s Timothy Taylor gallery grew organically out of their close working relationship (the two galleries, both mid-sized, share artists
Eduardo Terrazas
and
Gabriel de la Mora
), but also represented significant cost-savings for both parties.
Especially for Stroganova, a first-timer at The Armory Show, sharing the costs and having an experienced partner she trusts made it “a much more comfortable” situation. And thanks to their existing relationship and the work they do together to promote their shared artists, decisions like how to construct the booth, what kind of discount to offer, and how to hang the booth went down “super smooth,” she said.
They each brought two additional artists from their own galleries, and Stroganova said they sold at least one piece by each artist; they are splitting the proceeds from sales of the artists they share.
Martin Soto Climent
canvases with pantyhose sold for between $20,000 and $30,000, she said, and Terrazas’s works sold for between $40,000 to $50,000. One of de la Mora’s works, a single-panel eggshell work, sold for around $18,000. The gallery also had a work by de la Mora, which comprises the screens of stereo speakers and recalled the artist’s installation last summer at The Drawing Center in SoHo, on offer for $60,000. It did not sell during the fair’s run. 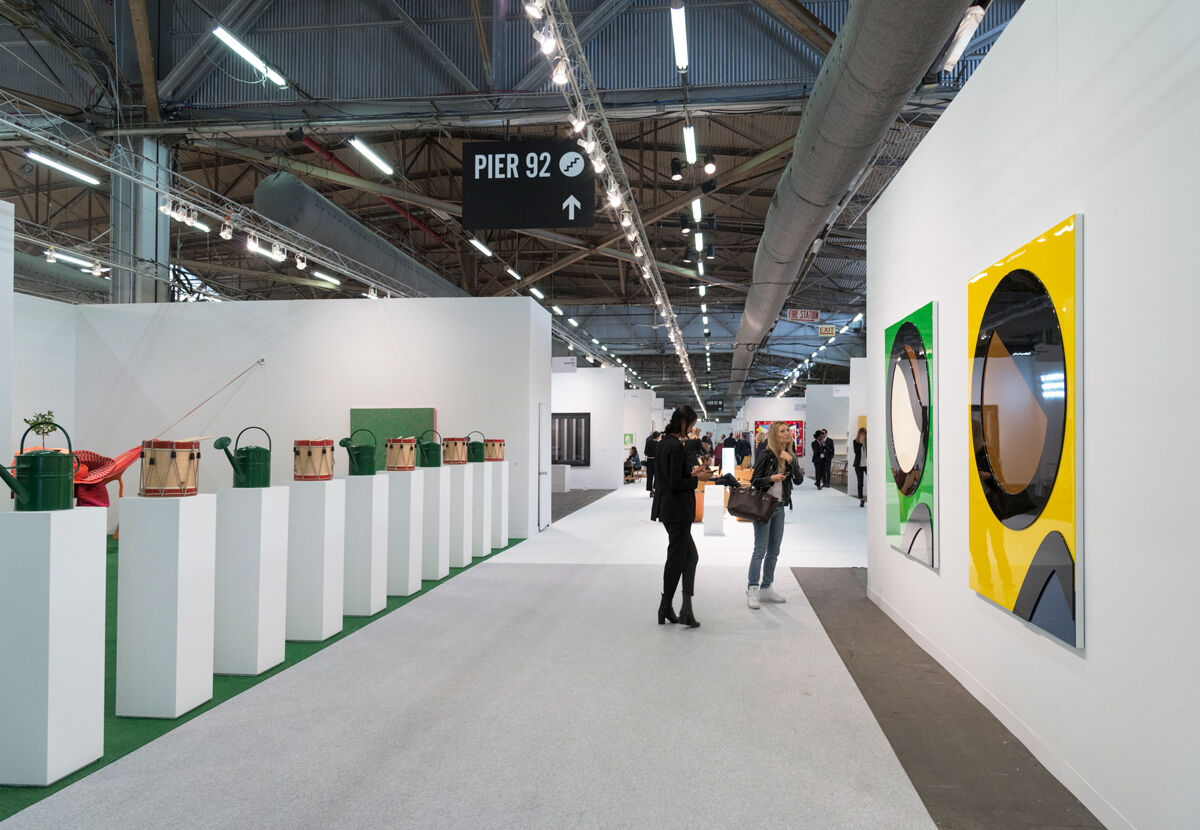 In another well-regarded gallery collaboration, Thomas Erben Gallery and Lévy Gorvy mounted a joint presentation in the Focus section of American artist
Senga Nengudi
. In this case, the two galleries operate in very different tiers of the market—Lévy Gorvy is a top-tier Madison Avenue gallery, routinely selling works in the seven figures, while Erben runs his program out of a fourth-floor space in Chelsea and more often works in the five-figure range. But Nengudi’s body of cerebral but tactile works share a conceptual link with Lévy Gorvy’s program and provided a bridge between the two.
And each brought something unique to the relationship. Erben has worked with Nengudi for decades. The two have developed a close collaboration; he knows her exhibition history, where each of her works are, and her pace and rhythm of production. Dominique Lévy brought a high-caliber group of collectors to the booth and has been able to leverage these and institutional relationships to raise Nengudi’s art historical stature.
Each of three photographs sold for $17,000. They are in editions of five, and Erben said the Museum of Modern Art has all three. A recent pantyhose-and-sand sculpture sold for $60,000, while an older one went for $75,000.
Erben said the collaboration could prove a new model at a time when the art market, like the broader economy, is experiencing a concentration in market share and a shrinking middle class.
“There’s a massive consolidation in power,” he said, citing the major blue-chip galleries who operate in multiple cities. “It takes the air out of the medium range.”
Anna Louie Sussman
Related Stories