What Sold at Art Brussels 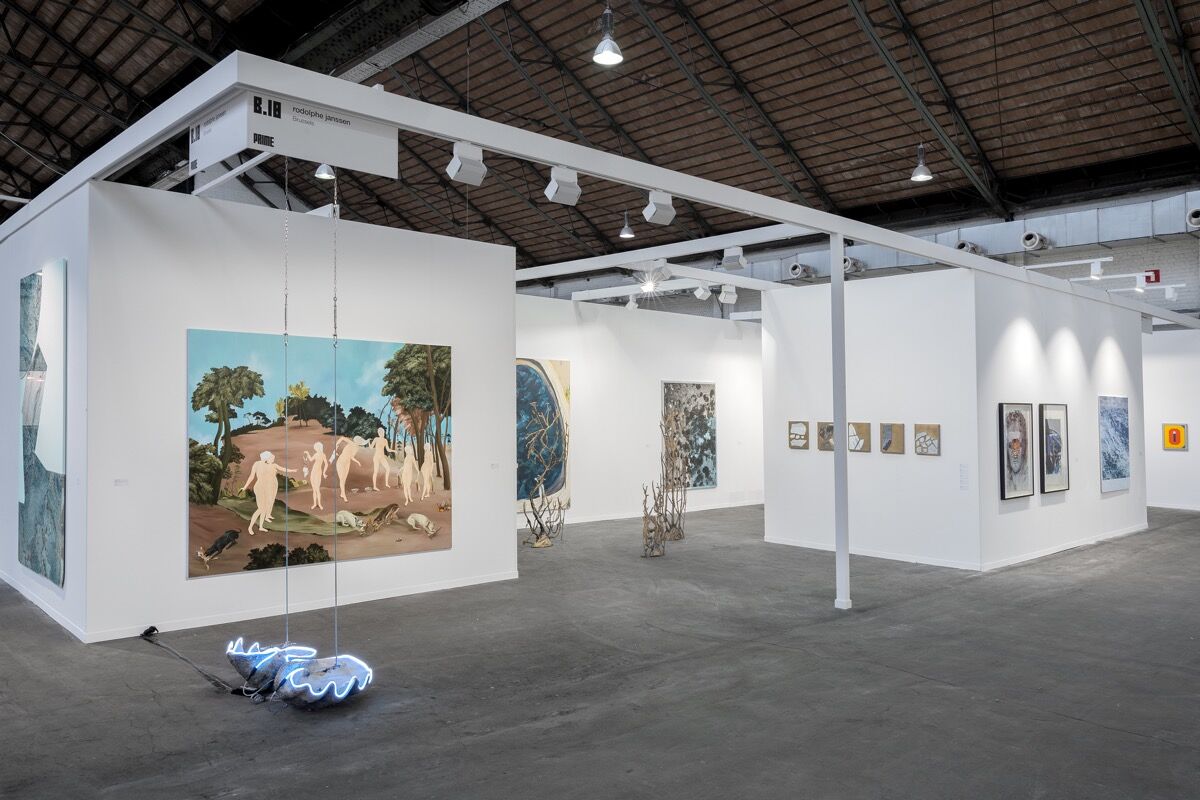 Art Brussels closed on Sunday, wrapping up four days of steady sales in the city’s historic Tour & Taxis building. The fair’s 35th edition welcomed 144 galleries from 28 countries to the former customs warehouse, where it had moved for the 2016 edition just weeks after the terror attacks of March 22nd.
A year later, the Belgian capital’s art scene is experiencing a new surge of momentum. Among other notable events this past week, C L E A R I N G inaugurated a new 5,400-square-foot space, and São Paulo’s Mendes Wood DM planted its flag in the city with a new gallery.
Across Art Brussels, dealers echoed the city’s resurgent spirit and reported overall satisfaction with sales. Accessibly priced and midrange works saw the greatest success, which isn’t to say a number of works weren’t sold in the six figures: Robilant + Voena sold a painting by
Julian Schnabel
to a Belgian collector for around £500,000; Galerie Mitterrand sold a 1967 work from a solo booth of
Niki de Saint Phalle
for between €150,000–€200,000; and Tina Kim Gallery sold a painting by
Dansaekhwa
artist
Ha Chong-Hyun
for €180,000–€200,000.
“There’s a good spirit,” said Galerie Lelong’s Nathalie Berghege, who placed a large painting by
Günther Förg
with a local collector for north of €250,000 on the fair’s first day. The gallery also sold a painting by 2016 Marcel Duchamp Prize nominee
Barthélémy Toguo
for €45,000 and a sculpture by
David Nash
for €22,000, among other works.
Berghege described a marked difference in the energy at Art Brussels this year compared to the challenges that faced the last edition. But she also spoke of uncertainty that remains in the air, from that caused by U.S. President Donald Trump to France’s own highly-contested presidential election, in which the young, pro-EU Emmanuel Macron and far-right nationalist Marine Le Pen advanced to a runoff on Sunday. Berghege said that, against this backdrop, art is as crucial as ever before.
“Buying art is not only a pleasurable thing. It should also be a political thing,” she said. “It is up to us working in art—collectors, museums, artists—to stay positive. We have to keep going. In France we say ne baisse pas les bras. Rebel.” 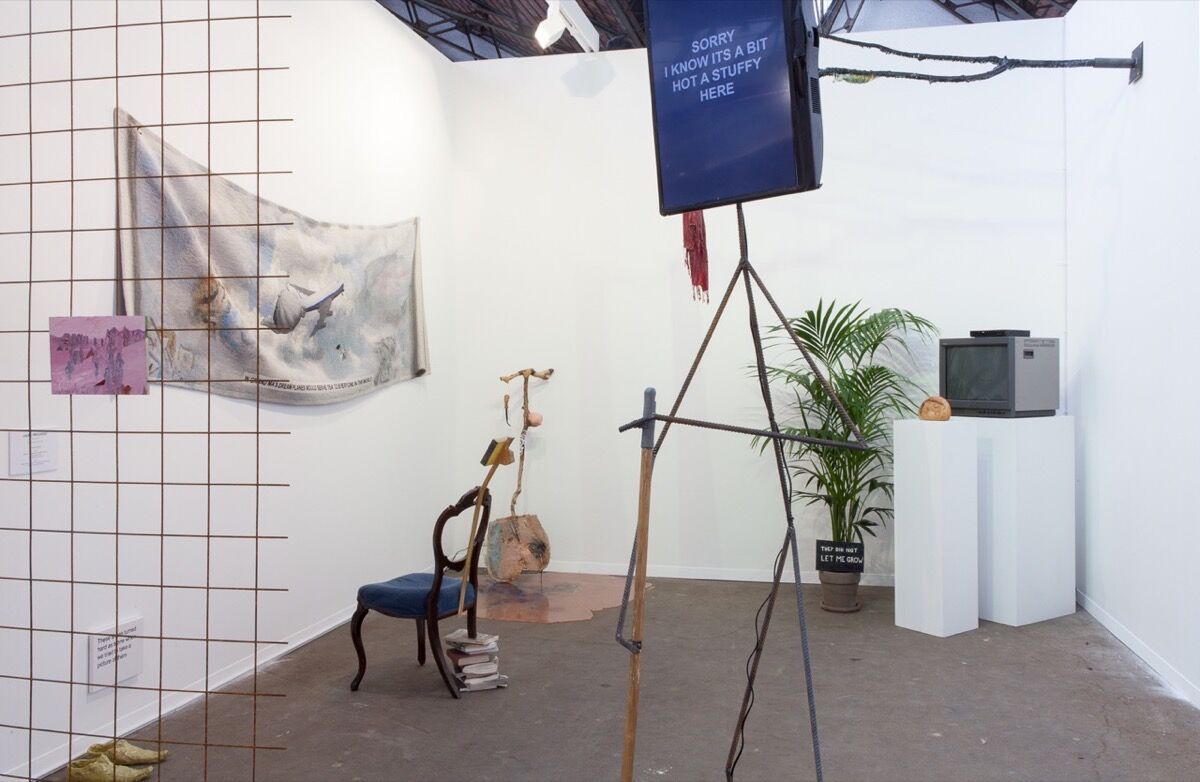 Brussels gallerist Rodolphe Janssen also commented on the significant uptick in the mood at Art Brussels this year. “Everybody can feel it,” he said. Among other works, Janssen sold a large oil on linen painting by
Sean Landers
for $95,000, five bronze and marble works by
Sam Moyer
for $9,000 apiece, a large painting by
Sanam Khatibi
for €20,000, a sculpture by
Thomas Lerooy
for €28,000, five woodcuts by
Gert & Uwe Tobias
for between €20,000–€43,000, and seven works by
Léon Wuidar
from the fair’s Rediscovery sector for €4,000–€12,000 apiece. Janssen commented that Belgium’s art market has certain advantages that allow it to be steadier than the market of other countries.
“The market in Belgium is always okay,” he said. “There are people of all levels of money who are buying.” The art market at large has cooled over the past two years, and become more top-heavy, but he said Art Brussels finds its strength by catering to the kind of art market experienced in the ’90s.
“It’s not a market for Russian billionaires like in Frieze; it’s not a big fashion or social thing like [at FIAC]; it’s not a fancy American fair like in Miami; it’s a fair for European collectors who buy art to put in their house to live with. It can be $10,000, $100,000, or $1 million,” he said, but “it’s not for storage.”
Brussels collector Alain Servais, whose expansive private collection doubles as an artist residency, said “the frost is less present” in the current market. Sales had been fine, but not “ecstatic,” he said, pointing to collectors taking more time to complete their purchases and making fewer buys overall. “Fifteen years ago there were 20 percent of the current amount of fairs and 50 percent of the current amount of galleries,” he said. The market’s infrastructure grew up for the wave of new buyers that flooded it in the mid-2010s, he said. Now, that infrastructure is still there but there’s less business. He said galleries need to tighten their belts and adapt their strategies to this new reality, taking a more personal approach to dealing art once again.
Meessen de Clercq took this advice to heart. “We prepared quite thoroughly in terms of visiting the right people and preparing new works so people could actually discover things even if they know the gallery program,” said gallery co-director Jan De Clercq. The gallery sold a work by
Thu Van Tran
for around €24,000, ahead of the artist’s upcoming participation in the Venice Biennale; multiple works by
Claudio Parmiggiani
for between €50,000 and €100,000; several pieces by
José María Sicilia
for €10,000–€35,000; and several works for €4,000–€15,000 by
Benoît Maire
, who won Art Brussels’s Solo booth prize. 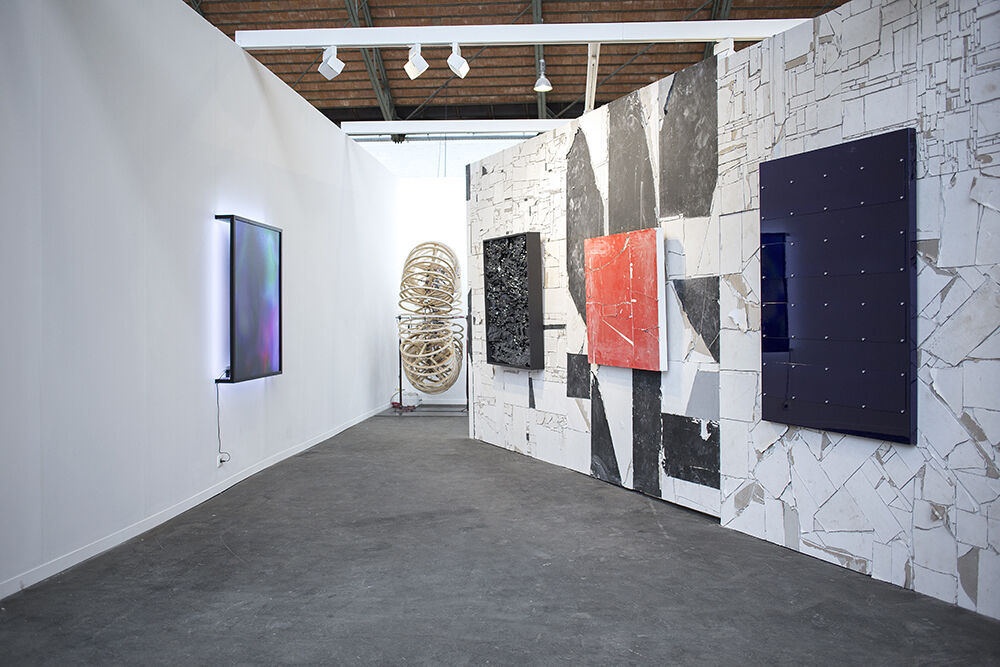 Advertisement
“The Americans came back,” said Charlotte Ketabi of Nathalie Obadia, who like many noted that a large percentage of American collectors had skipped Art Brussels last year, in the wake of the terror attacks. The gallery sold a number of works including five pieces from a fantastic solo booth by
Laure Prouvost
, a painting by
Jorge Queiroz
, a tapestry by
Josep Grau-Garriga
, a work by
Andres Serrano
, and a work by
Sarkis
, to collectors spanning France, Belgium, the Netherlands, Luxembourg, and the U.S.
However, it was the Brussels collectors, beloved for their appetite for risk and cerebral approach to art, that garnered the most praise from dealers. “They’re really vigorous and quite academic,” said Timothy Taylor’s Alexandra Leive, pointing to the city’s strong private collections, like Servais’s and the Vanhaerents Art Collection as evidence. The gallery sold works on paper by
Eddie Martinez
, a new etching by
Volker Hüller
, and work by
Eduardo Terrazas
on the range of $3,500–$40,000 by Sunday morning.
Steve Turner called the Belgians “loyal and constant.” He was presenting what was perhaps the most ambitious booth in the fair, designed by
Pablo Rasgado
using fragments of torn-down exhibition walls from the Museum of Contemporary Art in Antwerp (M HKA). By Saturday afternoon, he’d sold four works by Rasgado for $12,500 and two larger works by the artist for $30,000, as well as a woven work by
Diedrick Brackens
for $4,000 and a video work by
Emilie Brout & Maxime Marion
for $3,800.
In the Discovery sector, William Lunn of London’s Copperfield Gallery said they’d sold exclusively to Belgian collectors, save for one from the Netherlands. He said that like Americans’ love of painting, “Belgians more often buy objects and conceptual work.” In his case, that means a work by Natalie Reusser which he sold for under €10,000, and a piece by
Eric van Hove
he noted was purchased by a museum.
Belgian artists, too, found resounding praise this past week. At Brussels gallery Sorry We’re Closed, a work by Belgian
expressionist
painter
Bram Bogart
sold for €92,000 on Saturday morning, and two totems by Belgian ceramicist
Eric Croes
, coinciding with the artist’s solo show that opened at the gallery space March 25th, went for €2,500 apiece. The gallery’s biggest hit, however, was a wall-spanning project in its booth by New York-based artist
Josh Sperling
. Of the 41 colorful paintings scattered across the booth’s wall, 30 were sold in the early hours of the preview for €1,700–€5,200 apiece. 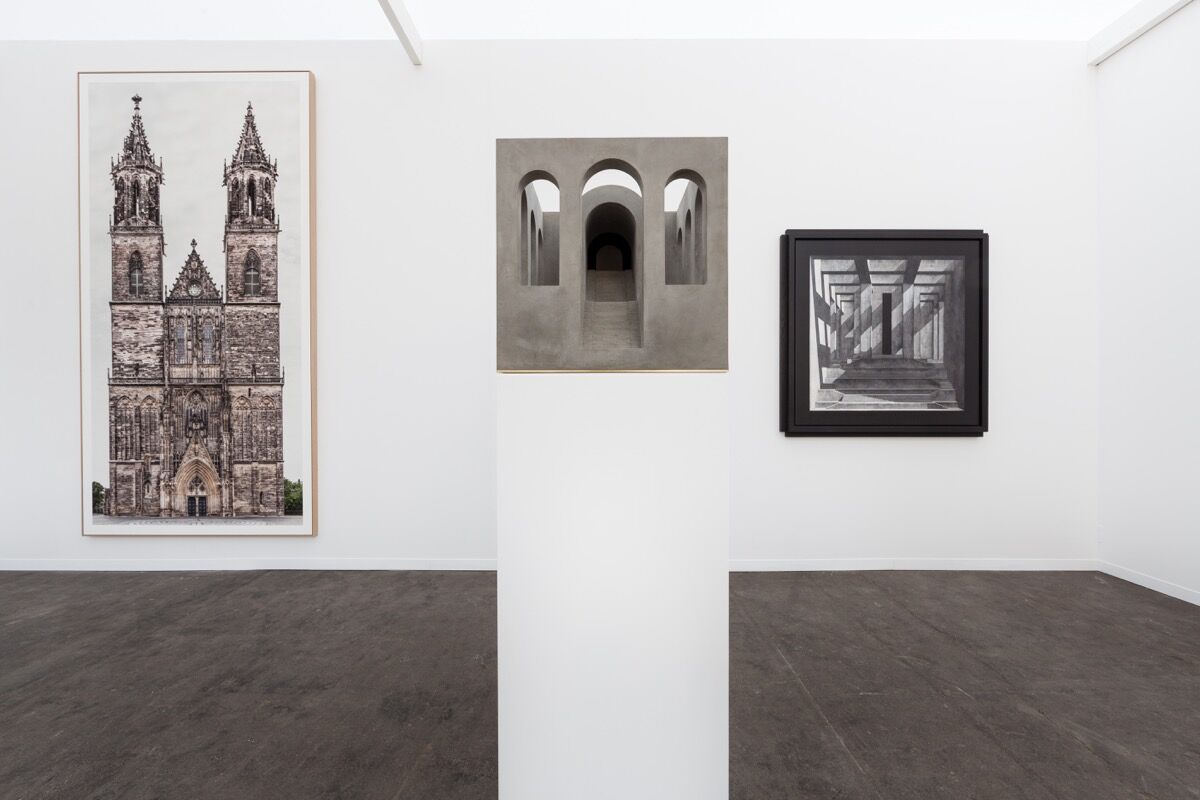 Noach Vander Beken of Antwerp and Hong Kong gallery Axel Vervoordt said that they too had seen greatest interest in their Belgian artists. “We’re in Brussels and showing people that we really put our shoulders into Belgian artists” and the Belgian market, he said. By Saturday, among other works, the gallery had placed two graphite and pencil drawings by Belgian artist
Lucia Bru
for around €10,000, a painting by young Belgian artist
Renato Nicolodi
for €20,000–€25,000, a
Michel Mouffe
work for around €50,000, and all three editions of Spanish-Belgian artist
Angel Vergara
’s video work.
According to Vander Beken, works on offer were at a much lower price point that the high six-figure
El Anatsui
they’d shown previously. This trend towards lower price points continued across the fair. And indeed, other dealers with six-figure works at Art Brussels this year noted that they wished they had brought lower-priced inventory.
Antwerp gallery Geukens & De Vil sold out its entire booth on opening day, including five works each for
Sofie Muller
,
Jaromír Novotný
, and
Finbar Ward
on the range of €3,000–€20,000. In the Discoveries sector, Thierry Goldberg placed all three paintings by
Tschabalala Self
, and two of four paintings by
Jonathan Lyndon Chase
during the fair’s preview. Harlan Levey Projects, who won the fair’s Discovery Prize, sold all but one work in its booth by end of day on Saturday, including a sculptural floor work by
Ella Littwitz
, The Land of the Unknown South (2017), which sold to an American collector for €24,000.
This is true to Art Brussels’s own billing as a fair for discovering new artists, whether young, emerging talents or older artists that have been overlooked. In many ways, Servais said, Art Brussels is still very much a regional fair, but, increasingly, as galleries look closely at their expenditures, it’s regional fairs that are delivering the strongest returns.
Molly Gottschalk is Artsy’s Lead Visuals Editor.
Related Stories

15 Artists We Discovered at Art Brussels 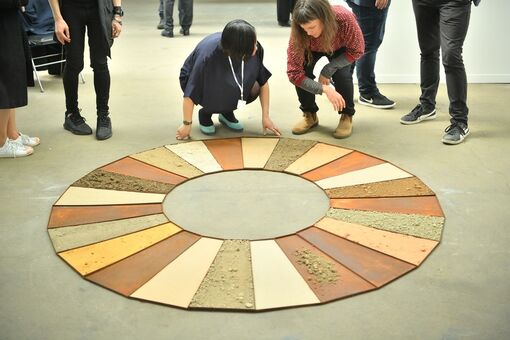