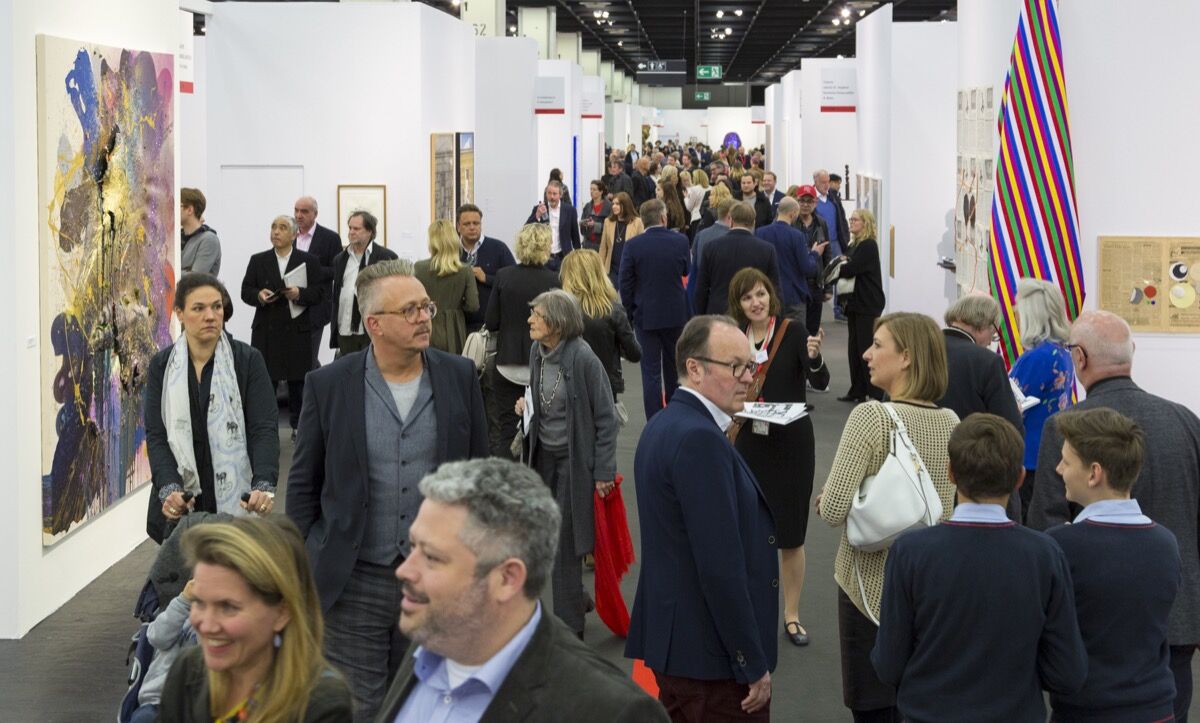 With each passing day, German Chancellor Angela Merkel increasingly seems to be the last steady hand at the global bargaining table. And so too with the country’s art market, an island of stability amidst global jitters. Brexit has sent ripples through the market in the U.K., President Trump has caused a few jolts through U.S. auctions and fairs; capital controls in China raised concern—though largely unwarranted—in Hong Kong in March, and the French election gave pause to some collectors in Brussels last week. But in the Rhineland for the 51st edition of Art Cologne this week, it was business as usual, with sales flowing as steadily as Kölsch from the tap—and little froth in sight.
Going into the fair, there was reason to think this might not be the case. The recently passed Kulturgesetz (a cultural heritage protection law, which requires government approval for artworks to leave the European Union if they are valued above a certain amount) was anticipated to cause administrative headaches for dealers and potentially weigh on the market.
“The art market in this country is an independent one in spite of the restrictions that have been imposed on it in recent years,” said Kristian Jarmuschek, president of the German Association of Galleries and Fine Art Dealers (BVDG), at the outset of the fair, referring to the law. For export outside of the E.U., government approval is required for works valued above €150,000 and more than 50 years of age. Works valued above €300,000 and are over 75 years old require government approval to leave Germany. Dealers were also concerned about potential drag from the hike in the country’s VAT on artwork sales to 19% in 2014 from 7% previously.
The BVDG published a 400-page white paper on the potential effects of the Kulturgesetz ahead of Art Cologne. But, according to dealers at the fair, while the law increases administrative costs, it had no noticeable impact on their sales. 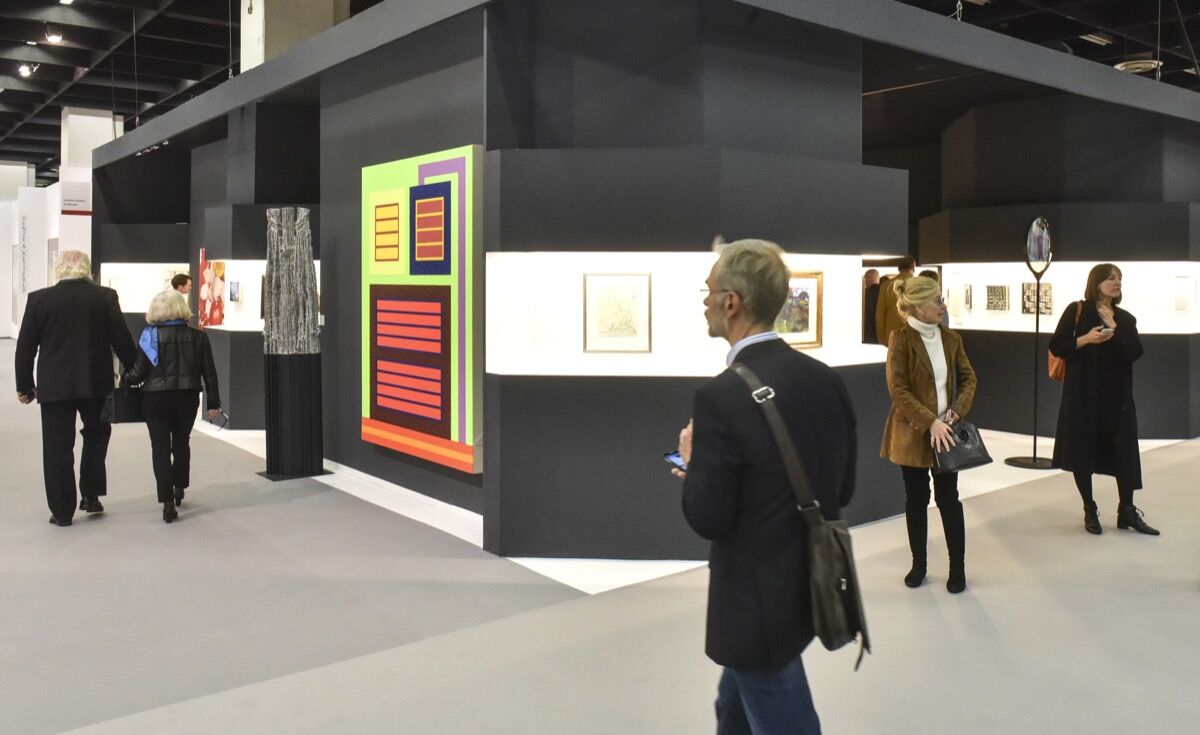 “They measure the works the same way they did before, and they’ve never, ever blocked a work we’ve tried to sell in 50 years of having the gallery,” said Galerie Thomas director Heike Grossmann. “I think there are just a very few works that will not be allowed to travel.”
She said the real burden will fall on the government entities enforcing the regulations more so than on galleries, since they are tasked with responding in a 10-day time frame.
“What is going to happen before Art Basel when all the galleries are applying at the same time?” Grossman wondered, noting that often works for a fair are secured just weeks before it takes place.
The gallery sold pieces by
Tom Wesselmann
and
Gotthard Graubner
as well as several works by
Adolf Luther
, which Grossman said were initially intended for an upcoming show in Munich.
“There are so many of his works in the Rhineland. So I thought that we could consign some works for the show, but instead everyone is buying,” she said. “The mood is good and people are ready to make decisions.”
At Sprüth Magers, the gallery’s Hannes Schroeder-Finckh reported similarly promising early results, a function of Rhineland collectors’ deep knowledge base.
“We’ve been in really good spirits,” he said. 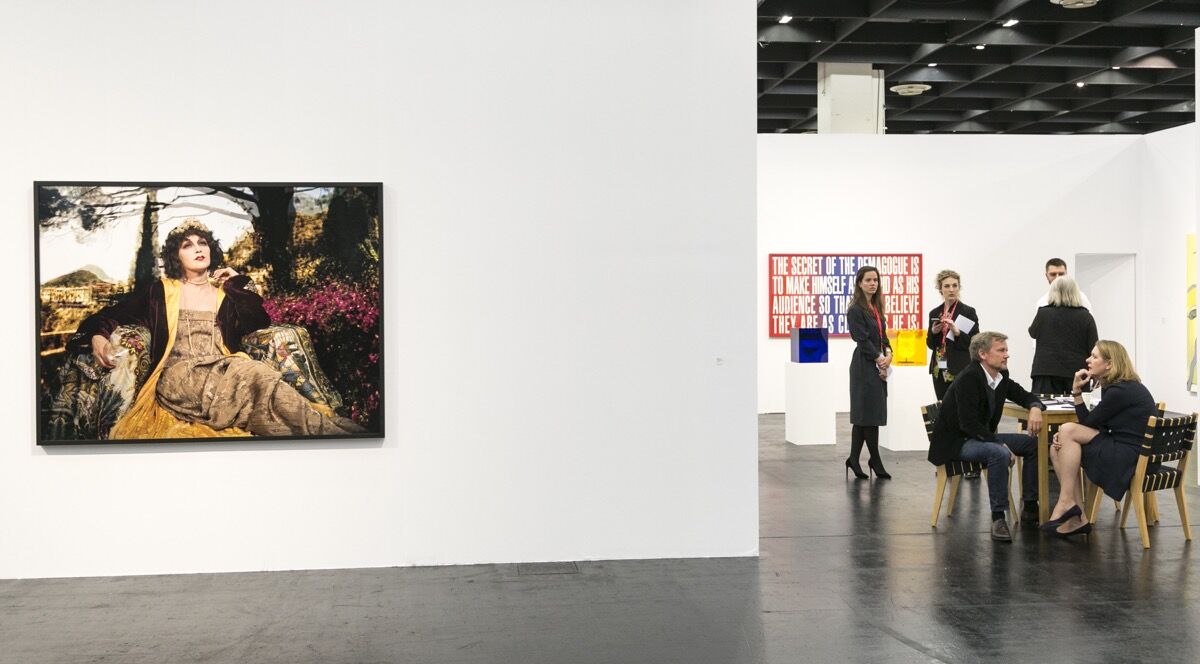 Advertisement
Two works by
Rosemarie Trockel
—Clock Owner (2013) and Mosquito = Elephant (2013)—sold on the first day to a Cologne-based collector for €90,000 apiece, as did
Michail Pirgelis
’s Handlines II (2017) for €20,000, and three untitled
John Bock
collages from 2017, two for €5,000 and one for €6,500. On the second day, the gallery sold
Cindy Sherman
’s Untitled #582 (2016) for €375,000, which he said speaks to the steady sales pace at Art Cologne that draws dealers to the fair—and keeps them coming back.
New to Art Cologne this year is Gagosian. The gallery is showing just six works in what is among the fair’s largest booths and easily its most ambitious. For Art Cologne, it took a considerably more conceptual approach than it does ordinarily, in order “to make a strong statement to reintroduce the gallery in this market,” said the gallery’s Jona Lueddeckens.
Chris Burden
’s cast iron street lamp work, Buddha’s Fingers (2014–15) is the single work that occupies the booth’s interior, which is
illuminated
only by the lamps themselves. Two works by
Cady Noland
on loan from private collections partially block the booth’s entrances, with the larger fence’s chain link being repeated on two
Rudolf Stingel
works on the opposite exterior wall; a
Richard Prince
Joke painting hangs on the adjacent exterior wall. 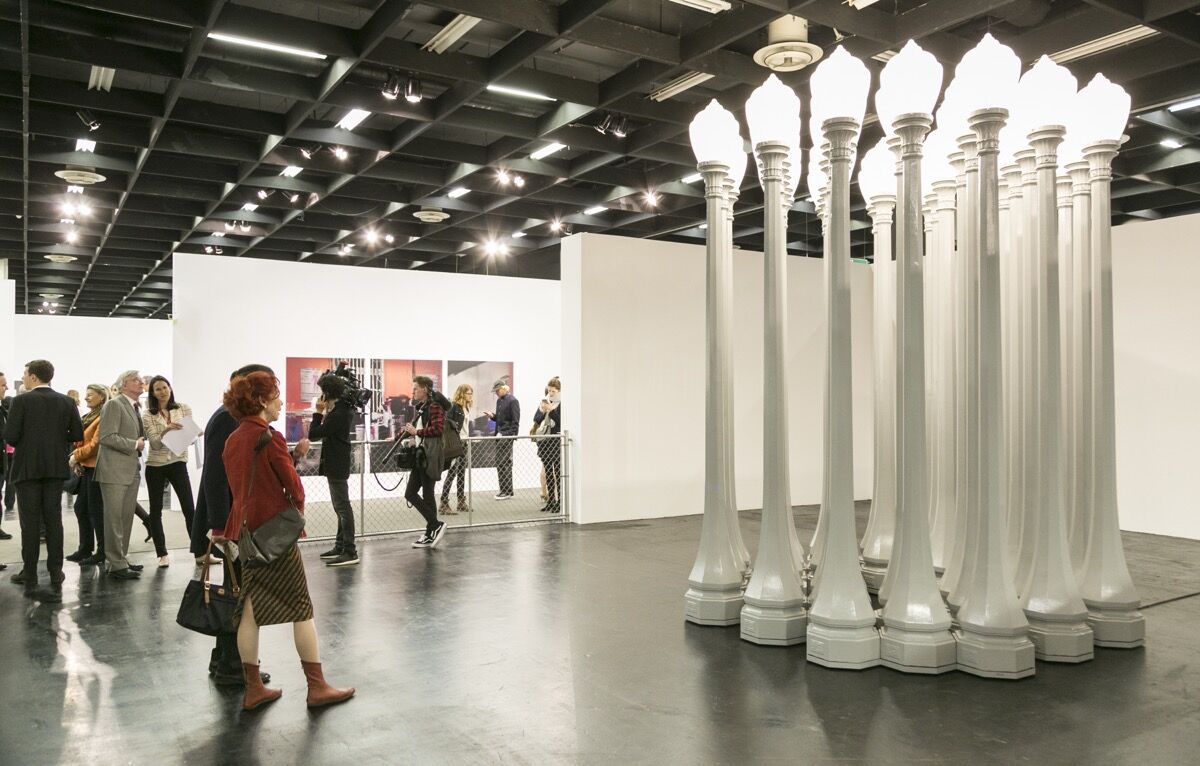 “The discourse in Germany is at such a high level, it’s one of the main reasons that we wanted to do the fair. But we also wanted to try to add something to that discourse,” said Lueddeckens. He said that decision was bolstered by the continued strength of Germany’s art market and a new generation of German collectors coming to the fore.
“If we didn’t think there was a client for a work like [the Burden] in Germany, we wouldn’t bring it,” he said.
Sebastian Klemm of Klemm’s also observed improvement in the German market, particularly in Berlin, where his gallery is located and which has, since the fall of the wall, been home to many artists and galleries but few collectors or even buyers of art.
“There is a tradition of collecting here [in Cologne]; it’s still a wealthy part of the country, and that’s not going away,” he said. Berlin’s market, though, was picking up, thanks to an emerging class of high-earners (or in some cases, people who have moved there from historically wealthy cities in the country and, subsequently, inherited).
“You really feel it now. Looking around the city, the level of how people are dressed, what cars they’re driving, how much you have to pay for food and rent, you can tell there is money in the city,” he said.
“We had five or six new people in the past year who are buying things that are €10,000 to €25,000,” he said. “For the first time there are more than just the few big names that everyone knows.”
At Art Cologne, the gallery sold multiple variants of
Sven Johne
’s Anomalies of the Early 21st Century / Some Case Studies (2015), starting at €8,000, a
Keltie Ferris
body print
for €12,500, a large
Alexej Meschtschanow
sculpture for €14,000, and a
Bernard Piffaretti
painting for €25,000, among others. 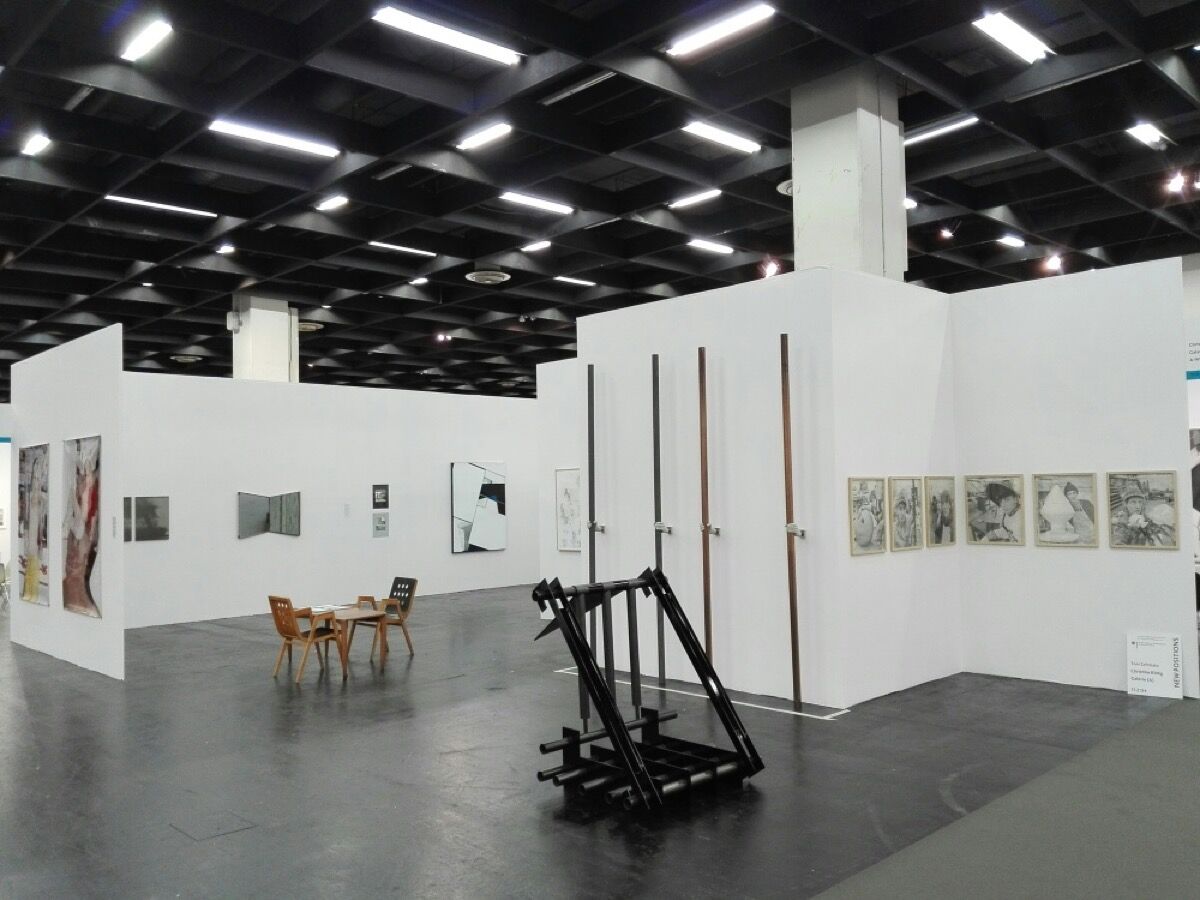 Art Cologne typically sees significant buying activity on the weekend, but this year ends on Saturday due to overlap with Gallery Weekend Berlin. Vienna’s Christine König said she wasn’t concerned, noting that the preview day is usually decisive for her booth.
“I know some colleagues say the weekend is important, but I always say, what does not happen on the preview day, does not happen anymore,” she said. “And we did very well.”
König reported selling multiple works by
Jimmie Durham
for undisclosed prices as well as a painting by
Natalia Załuska
for €8,000 and one of the
Toni Schmale
wall-based sculptures for €14,000 that they brought as part of Art Cologne’s New Positions sector for solo presentations of young artists. The work, produced ahead of solo shows at Vienna’s Secession and the U.K.’s Baltic Arts Center, sees concrete casts of the artist’s hands grip steel bars which have been fired up to 950 degrees Celsius, causing them to turn gold.
Fellow Vienna gallerist Rosemarie Schwarzwälder sold a
Katharina Grosse
painting for €119,000 on Wednesday (prices for the artist, who was recently picked up by Gagosian, have nearly doubled over the past year) as well as three works from
Daniel Knorr
’s “Depression Elevations” series, including Brunnenstraße Mosaik Parking (2017) for €70,000 in total.
Knorr, who has been in attendance at a number of fairs over the past year, joked about his suit.
“As an artist you’re not supposed to be dressed like this,” he said, but “it’s a job.” He’s been working to fund his contribution to this summer’s Documenta 14, which will send smoke pouring from the tower of Kassel’s Fridericianum for the duration of the exhibition (early tests led locals to call the fire brigade). After determining that he needed to double the number of smoke machines in the tower, costs for the project also doubled, something he said he’s offsetting through the sale of several of his puddle works and a book edition, in which he has pressed
refuse
from the streets of Athens (Documenta’s other location this year) between the pages. 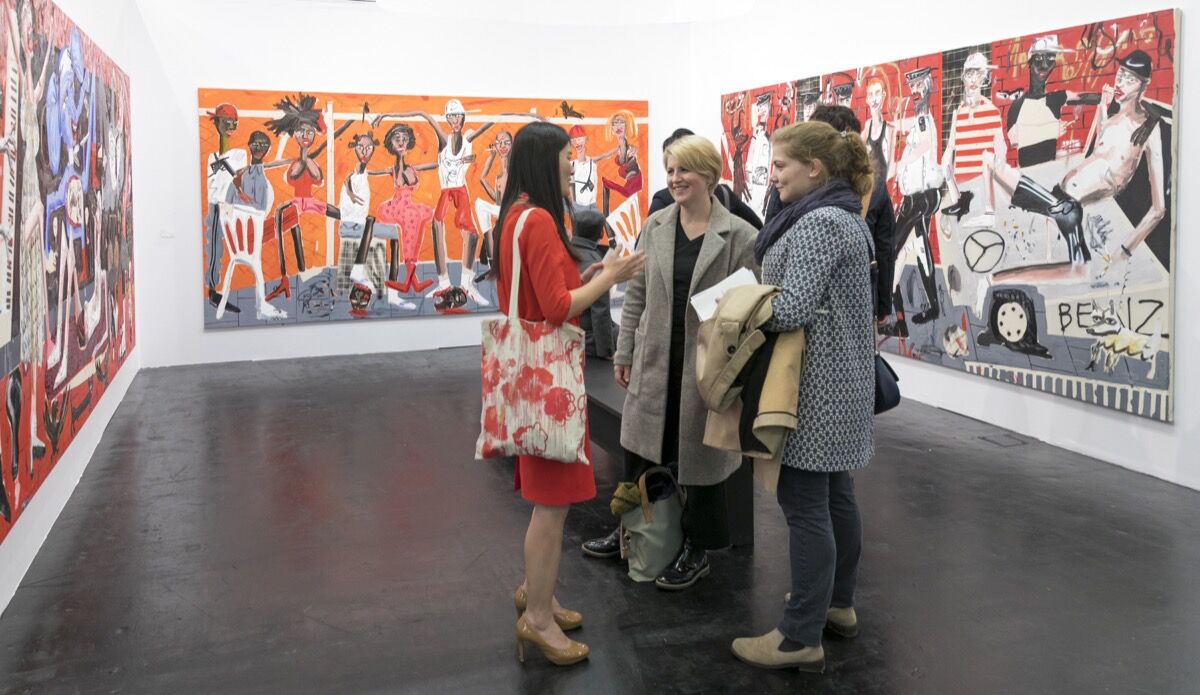 Documenta opened just three weeks ago and 1,200 miles away in Athens, but it was already affecting the market at Art Cologne, dealers said. Berlin’s Wentrup sold three pieces from early Documenta favorite
Nevin Aladağ
’s “Music Room” series for €48,000. (Aladağ is also included in Christine Macel’s forthcoming Venice Biennale.) The works—an umbrella stand turned into a drum, a frame-turned-harp, and a side table from which now hangs two sets of chimes—were first shown as part of a 2015 performance at Brussels’s WIELS Contemporary Art Centre.
Gallery director Gawain von Mallinckrodt said that in his experience, the fast pace of sales this year at Art Cologne was uncharacteristic for German collectors. “Usually, they take their time and don’t let on their interest until much later,” he said. Among other sales during Art Cologne’s first two days, multiple works from emerging photographer
Louisa Clement
’s “Head” and “Fractures” series sold for between €2,800 and €6,000 (for three “Head” works).
Early sales picked up from last year for young galleries on the third floor, in the section now rebranded as “Neumarkt.” Among the most successful galleries in the section this year was Cologne and Seoul’s Choi & Lager. The gallery sold a whopping 10 out of 12 paintings by young U.K.-based artist
Dale Lewis
for €12,000 apiece, several of which went to revered New York collectors Susan and Michael Hort. 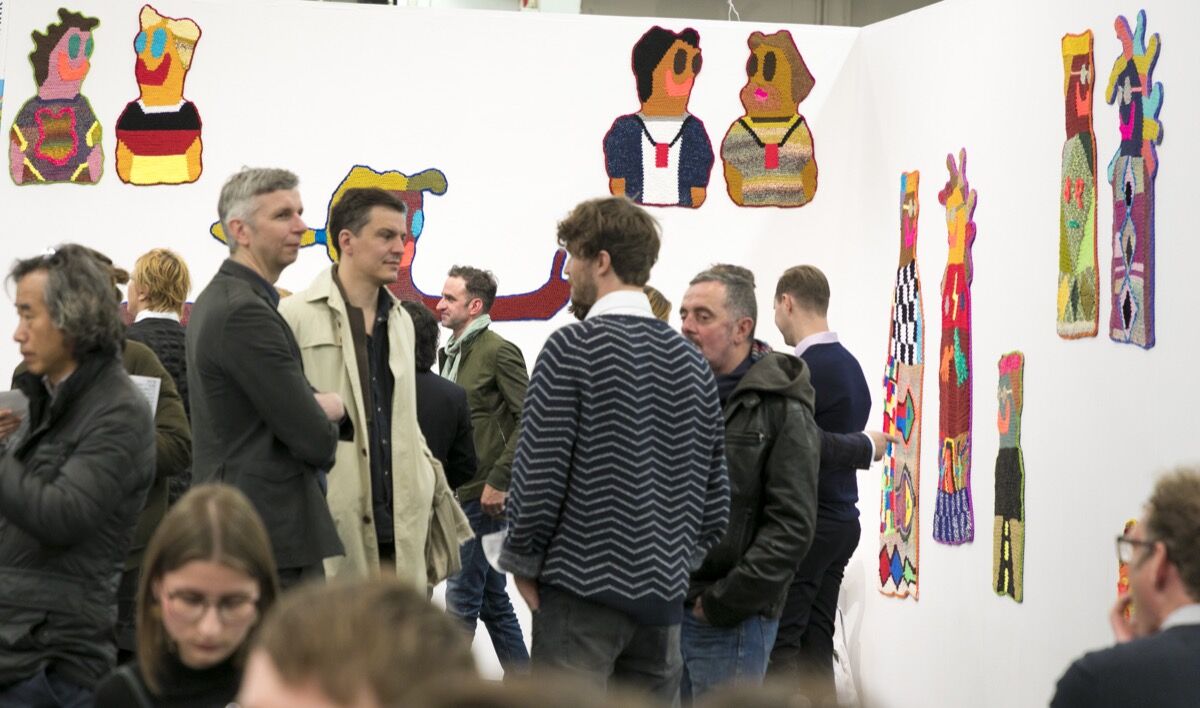 Another Neumarkt entry, Berlin-based Galerie Crone, went for a Gagosian-esque minimal approach to its stand, showing just one work, a first-ever collaboration between
Tobias Hoffknecht
and
Stephanie Stein
. The installation is modeled after the padded cells that can be found in disused Stasi prisons in the former GDR. One of three editions of the work sold for €28,000 on opening day.
Crone was one of just a handful of Berlin galleries participating in Neumarkt this year. Many didn’t apply this year as their staffs are not large enough to split between Art Cologne and Gallery Weekend Berlin, the city’s biggest annual market event.
This allowed the usually Berlin-dominated upper floor of Art Cologne to welcome a number of new players this year, with particular emphasis on young galleries from the Rhineland. Among them is Lucas Hirsch, the eponymous Düsseldorf gallery of the former Sies + Höke director. Hirsch was showing works by Brussels-based artist collective
HC
, which
appropriates
found images of
Picabia
paintings, several of which had sold for €4,000 by Wednesday evening.
“The originals are four million, so it’s a good bargain,” he joked. 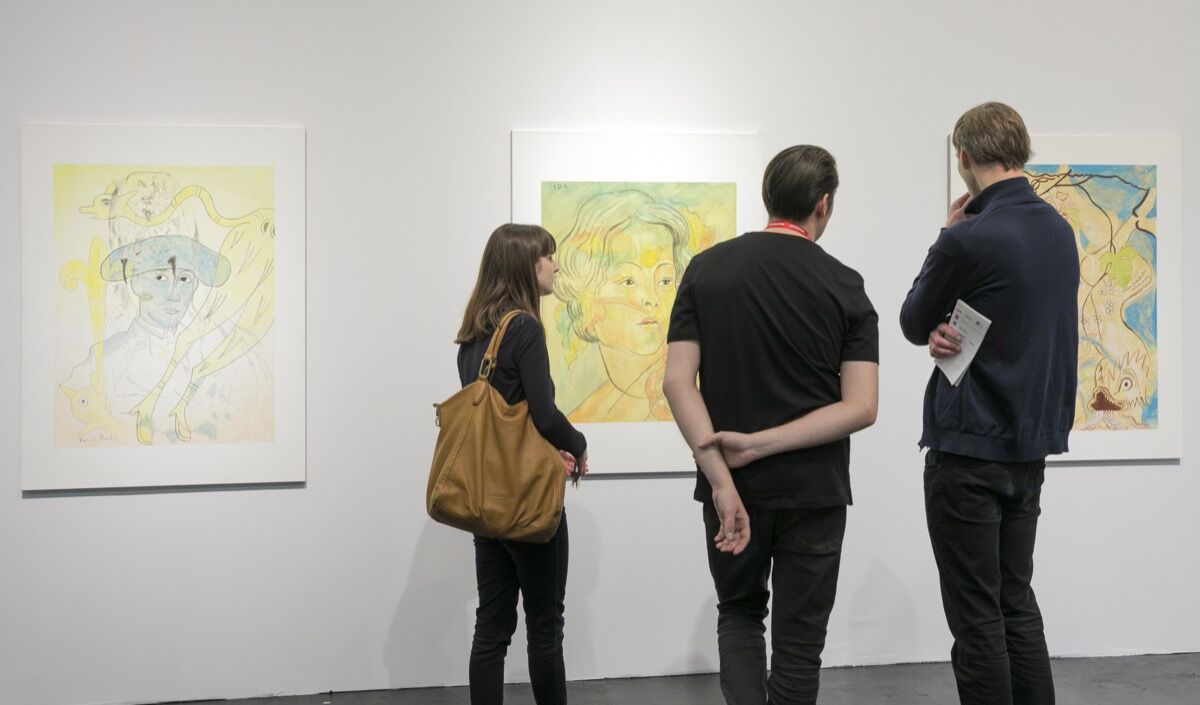 Hirsch said he got the push to break out on his own at last year’s Art Cologne. “A couple of my friends came up and said ‘Dude, you’ve been working at Sies + Höke for seven years. It’s time to do your own thing,’” he said. Starting at a time with the market has been relatively dampened was actually a positive in his view.
“If you start in a year when everything is flourishing then a crisis hits you hard,” he said, whereas starting a gallery during a downcycle has forced him to be creative in how he’s operating. “Better art is usually happening when you don’t have the means to do something that’s three meters tall and gold,” he said.
Hirsch said that the loyalty and consistency of collectors in the Rhineland has allowed a fairly seamless transition from one of its biggest galleries to its youngest. It’s this loyalty that continues to power Art Cologne itself: Each year, doctors, dentists, and small business owners reliably pick up a few pieces from their chosen handful of galleries. And because of that, this region is able to maintain one of the more genre-diverse and intellectually engaged art scenes the world over.
Alexander Forbes is Artsy’s Consumer Marketplace Strategist. He was previously the Executive Editor of Artsy Editorial.
Related Stories