What Sold at Art Cologne 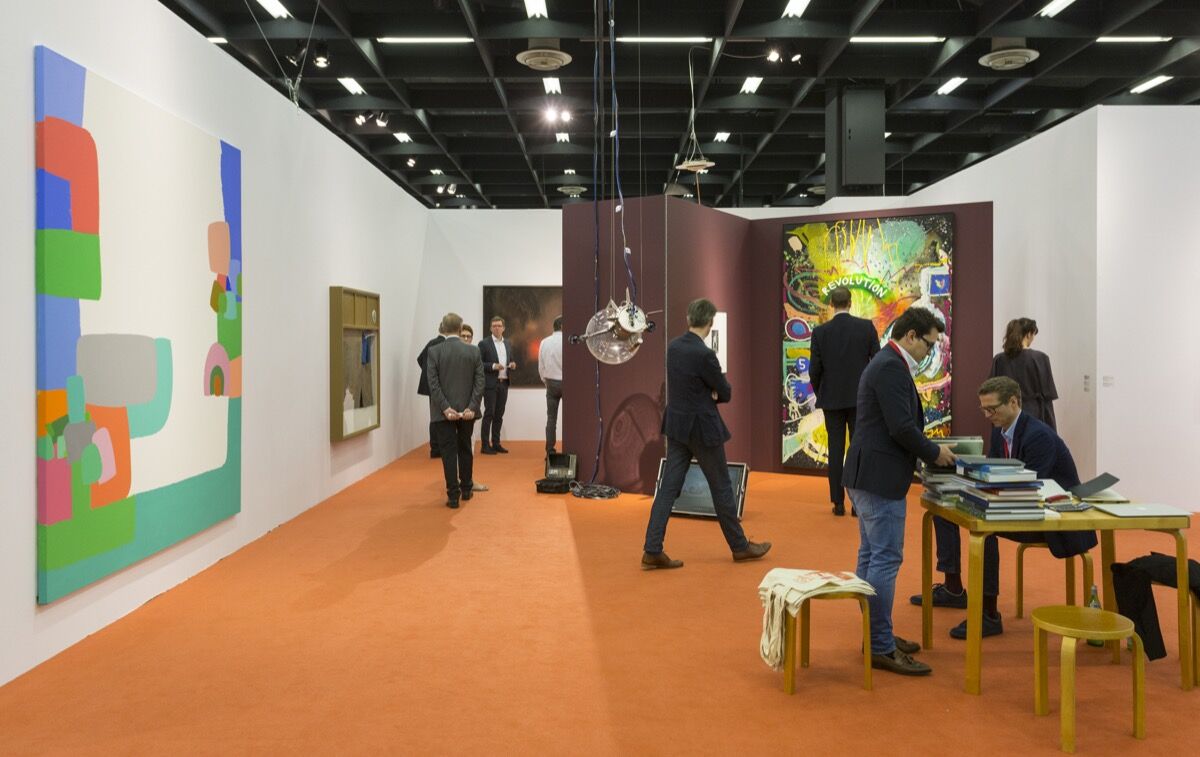 Just past the entrance to this year’s edition of Art Cologne was a special mini-exhibition called “The Koln Show,” which consisted of photos of the city’s gallery scene in the early 1990s—openings and after-parties and youthful versions of the prominent Cologne dealers and artists who would later dominate the art market: David Zwirner, Monika Sprüth, Daniel Buchholz,
Wolfgang Tillmans
,
Albert Oehlen
, and many others. The snapshots heightened Cologne’s mythological status as an avant-garde mecca, and underscored the city’s ongoing importance in the art market today.
Many of these figures appeared not just in the mini-exhibition, but also at Art Cologne itself, a testimony to how the long-standing relationships between the city’s dealers and its clients allow this fair to thrive when it focuses on its beating heart: the local visitors from the Rhineland. The fair, which closed its 52nd edition on Sunday, featured booths by 210 galleries from 33 countries and drew 55,000 visitors, many of whom were the high-earning professionals who have been largely forgotten by galleries mostly interested in catching billionaire collecting “whales.”
“The bulk of collectors in Germany, our bread and butter, is a lot of professionals, like well-to-do dentists and lawyers and doctors, who buy a few artworks per year and spend maybe €150,000,” said Daniel Hug, who has been director of Art Cologne, the world’s oldest contemporary art fair, since 2008. “It’s not glamorous, but if you have a thousand of these guys, that’s buying power.” 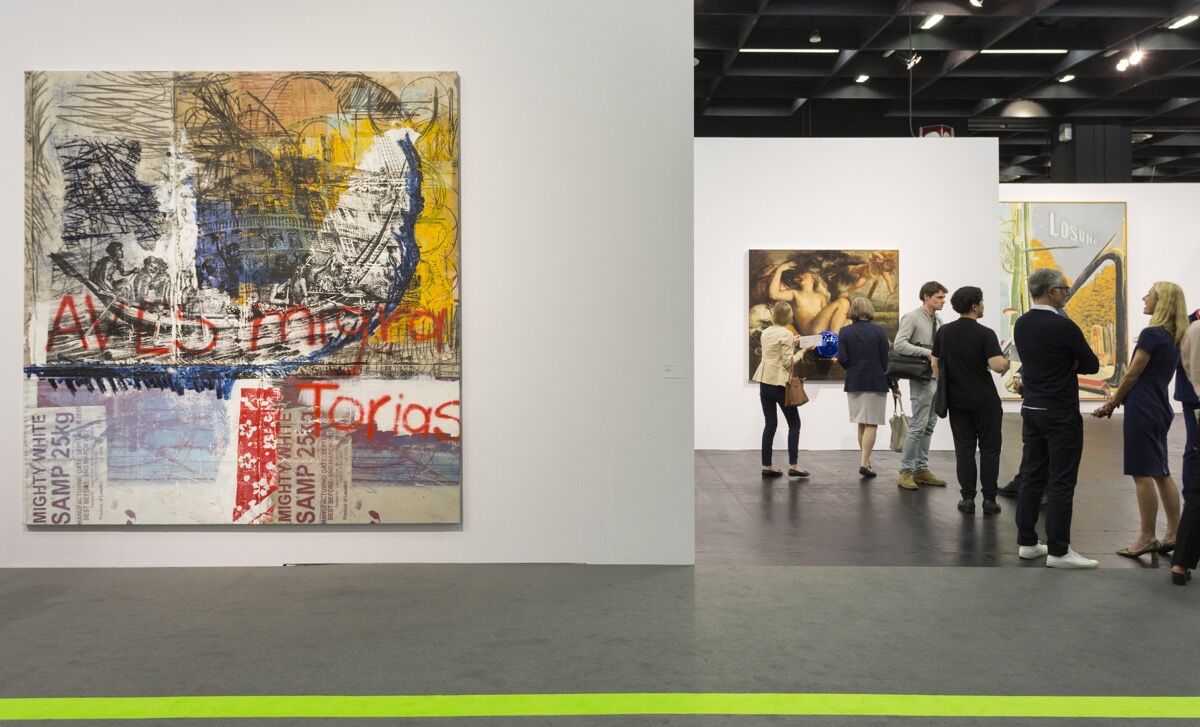 Hug estimated the visitor base to the sprawling Koelnmesse expo center was around 80 percent German and 20 percent international. “It’s our national fair,” he added.
Of any nation in which to sell art, Germany is an excellent choice. While the U.K. still accounts for the bulk of art sales in Europe (according to “The Art Market | 2018,” released in March by UBS and Art Basel), Germany is the wealthiest nation in the European Union. The country’s economy grew by 0.06 percent in the last quarter of 2017, helping support its robust contemporary art infrastructure of Kunsthalles and museums fostering a culture of widespread art appreciation.
In the German market, Hug said, “art still plays a role for normal people, and it’s not just a playground for the one-percent, the elites.” 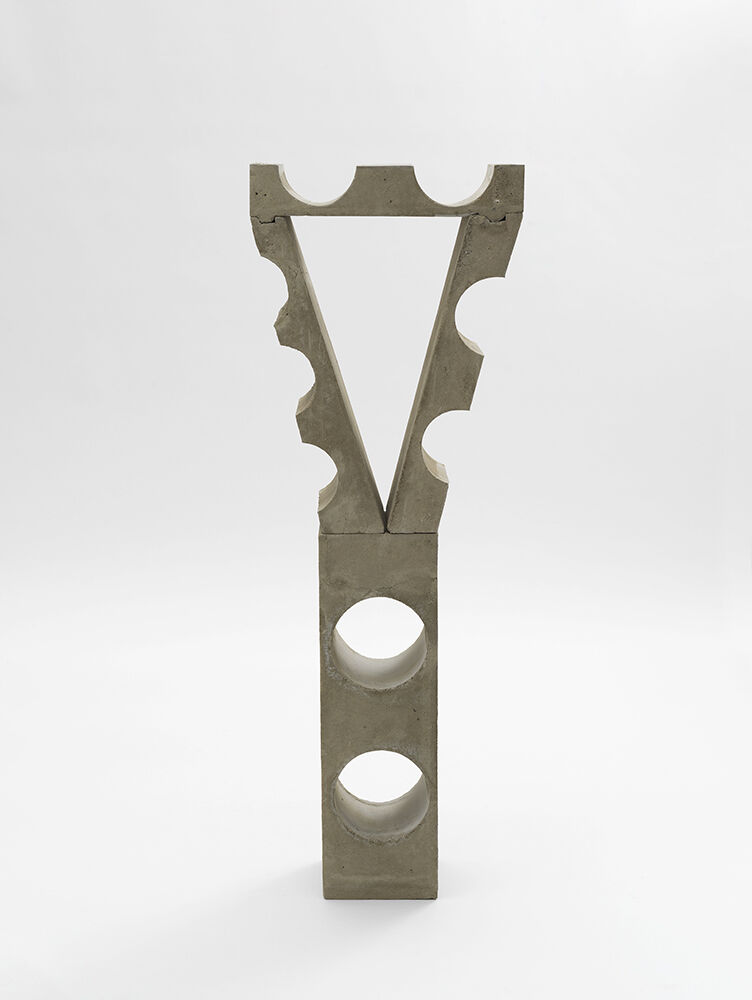 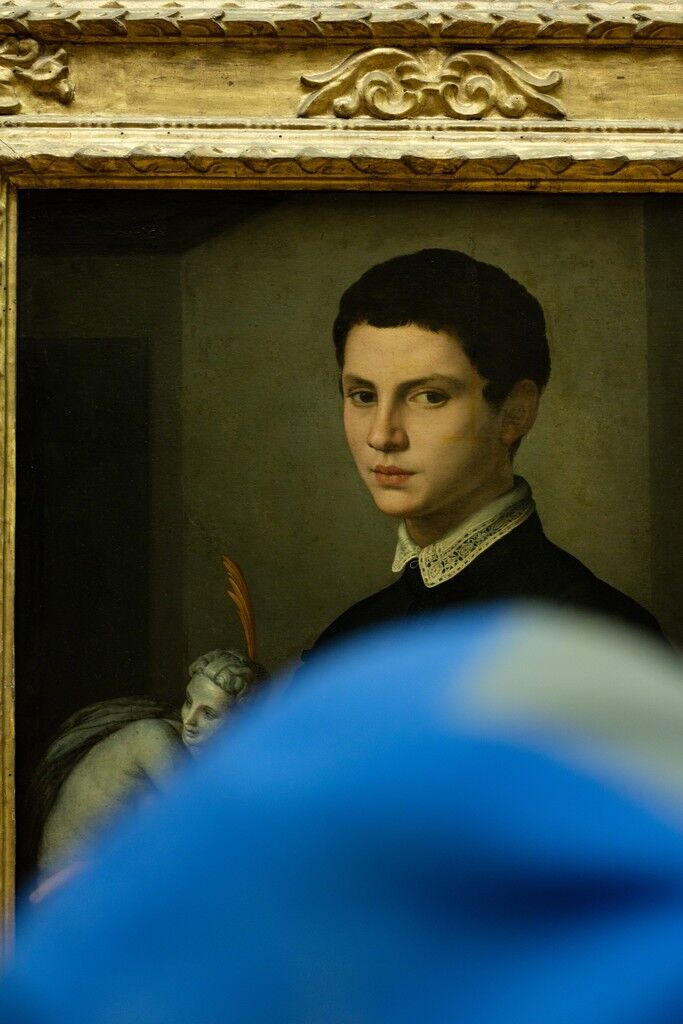 Wolfgang Tillmans
Bronzino, 2015
David Zwirner
Advertisement
That kind of buying landscape could create an atmosphere where the global mega-collectors, while greatly outnumbered by mid-level German collectors, could come in and scoop up the big pieces. But that didn’t happen as much this year, Hug said, mostly because German collectors are educated enough to make their own judgements—to be frugal when they need to, or to spend big when they know the picture is worth the price. Hug claimed that, for the most part, German collectors don’t need art advisors.
“This whole kind of art consultant existence in New York doesn’t really exist in Germany,” Hug said.
Hug added that while these German collectors often support galleries selling work at the lower- and middle-tier price points, this year they dabbled at the top tier, as well. Evidence of that fact could be found at the booth of David Zwirner, who here is nothing less than local royalty: His father, Rudolf Zwirner, was a co-founder of the groundbreaking fair in the 1960s, and the younger Zwirner first came up through the city’s scene during the heady early ’90s period depicted in “The Koln Show.” Zwirner associate director Julia Mechtler said the higher-priced works that sold for as much as €1 million—including pieces by Tillmans,
Neo Rauch
,
Thomas Ruff
, and
Isa Genzken
—all went to German collectors, even though international powerhouses such as Mera and Don Rubell, Susan and Michael Hort, and Lonti Ebers were in attendance. 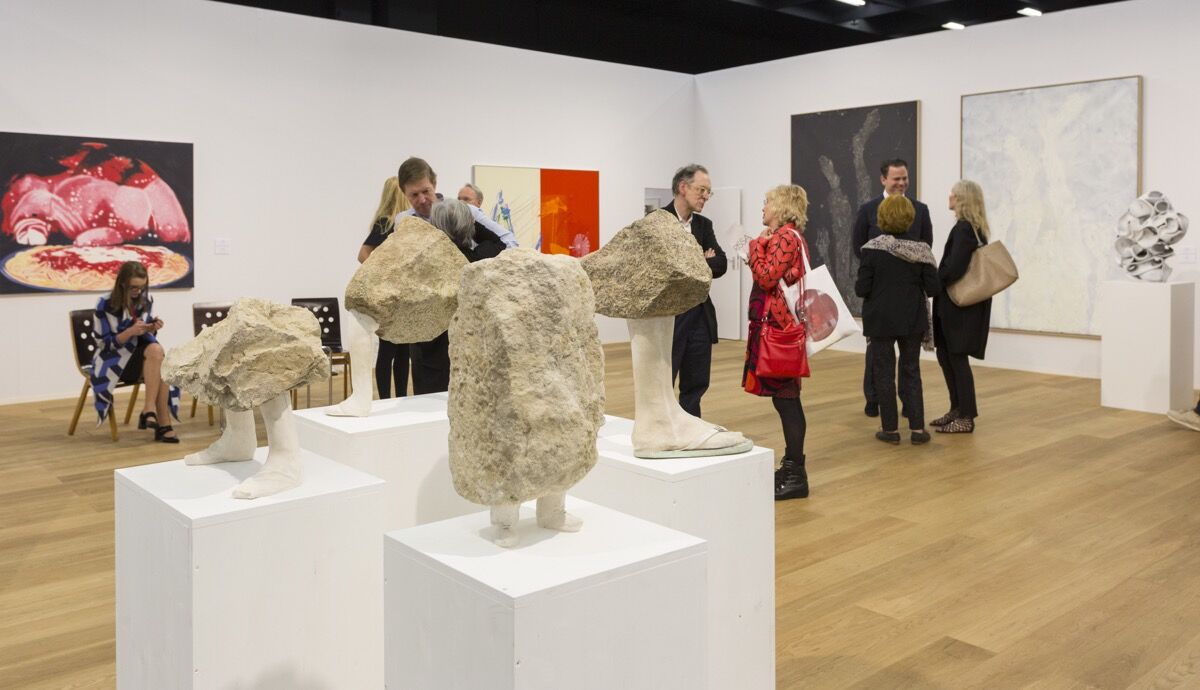 To the left of Zwirner was Sprüth Magers, which made a splash when it sold a work by
John Baldessari
for $325,000 early in the fair. And while Sprüth Magers is based in Berlin, and founder Monika Sprüth first opened the gallery in Cologne, the Baldessari actually went to an Asian collector. (Despite the nationality of the buyer, the work, the gallery said, will stay in the Rhineland.) Another big sale at the booth—a work by
Rosemarie Trockel
that sold for €200,000 at Sprüth Magers—also went to a non-German collector.
“We have a strong local base—Monika Sprüth opened here in 1983—but these sales were to both national and international collectors,” said Andreas Schleicher-Lange, a director of its Berlin-based gallery. (The Cologne gallery closed in 2008, though it’s maintained its presence there by opening an office.) “This was the first international art fair, and in recent years, it’s become international again.”
Global mega-galleries without a presence in Germany tailored their booths directly to the local clientele. Thaddaeus Ropac has five spaces across Salzburg, Paris, and London, but none in the Rhineland, so the gallery’s directors brought work that could draw in the prospective local clients they’ve yet to meet. 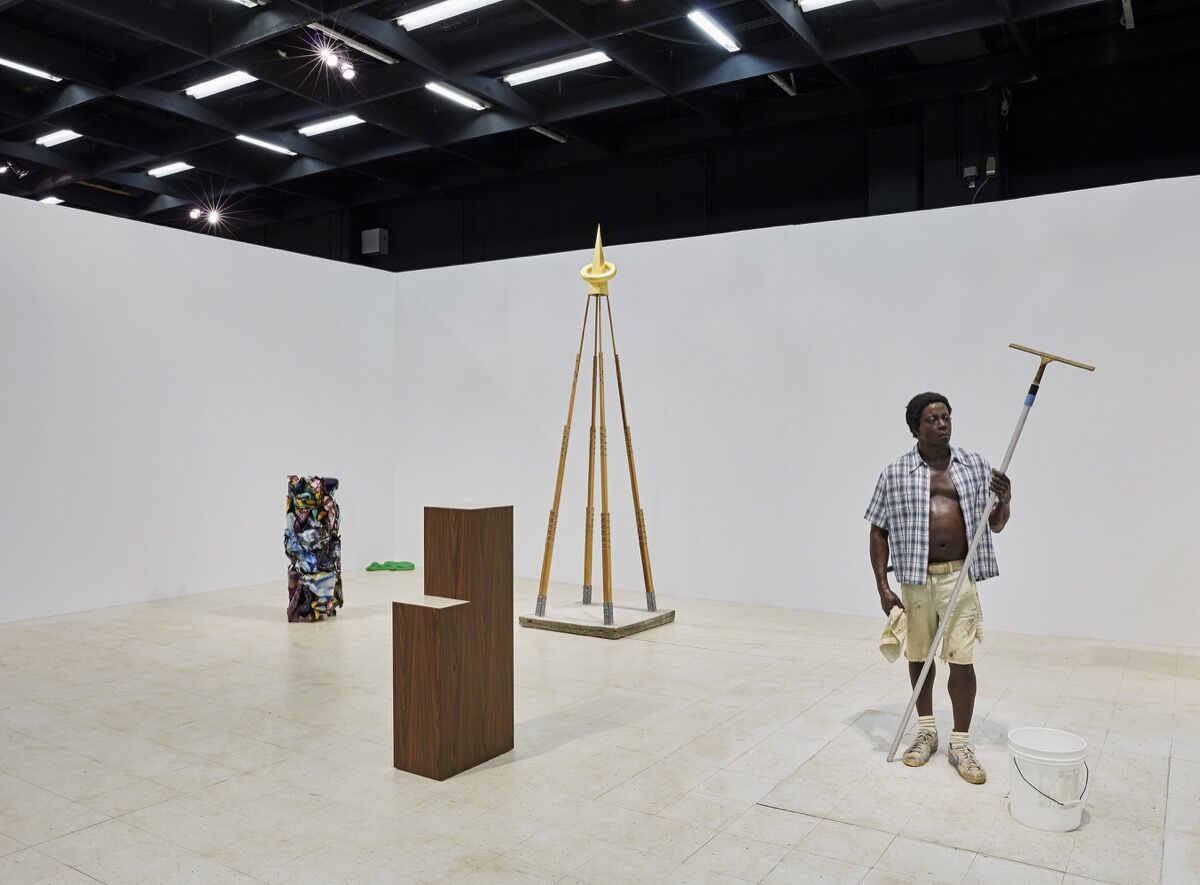 “We try to bring German artists for the Germans here, because they love them so much—it draws them into the booth,” said Isabella Herzig, a sales director at the London space.
She pointed out that the booth had two hulking fresh-out-of-the-studio works by
Georg Baselitz
, the 80-year-old éminence grise of German painters, both of which sold for €500,000.
The sun never sets on the Gagosian empire, and yet it has placed no flags in Germany, despite representing a number of the country’s best-known heroes, such as
Anselm Kiefer
,
Albert Oehlen
, and Baselitz. The gallery first became an Art Cologne exhibitor in 2017, when it presented a gut-punch of a booth comprised of
Cady Noland
fences around
Chris Burden
’s Buddha’s Fingers (2014–15), which incorporates the same street lamps that make up his iconic Urban Light (2008), installed outside of the Los Angeles County Museum of Art. 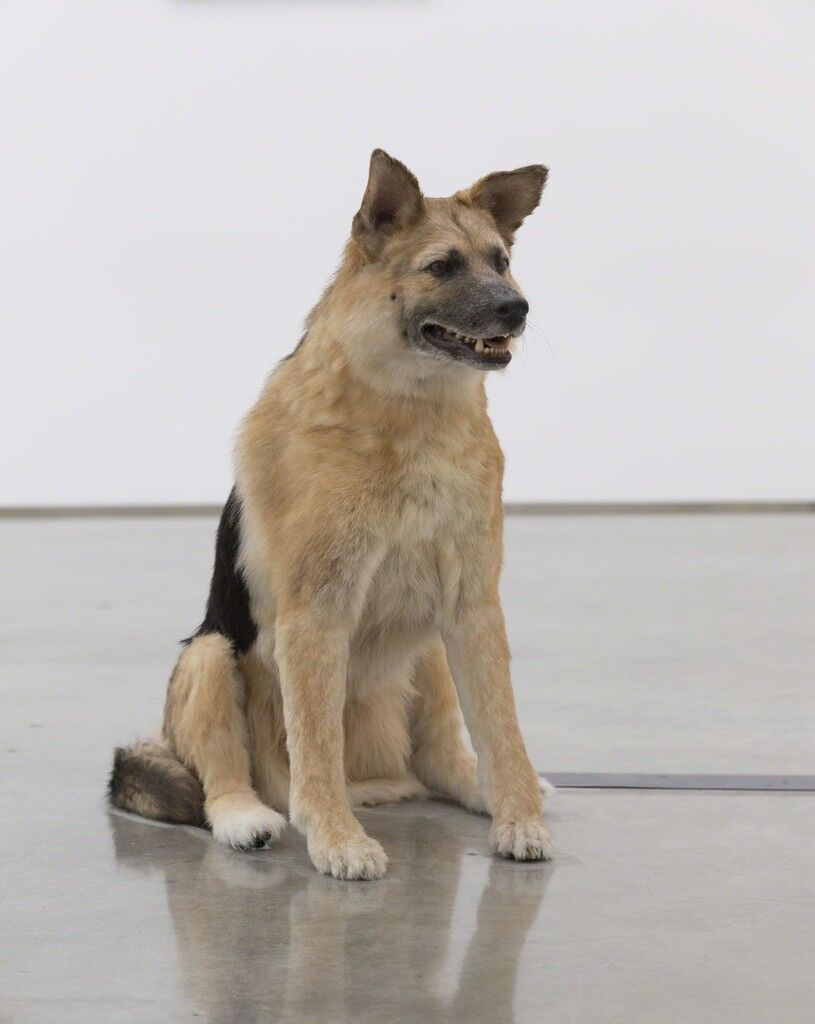 Piero Golia
The Dog and the Drop, 2013
Gagosian 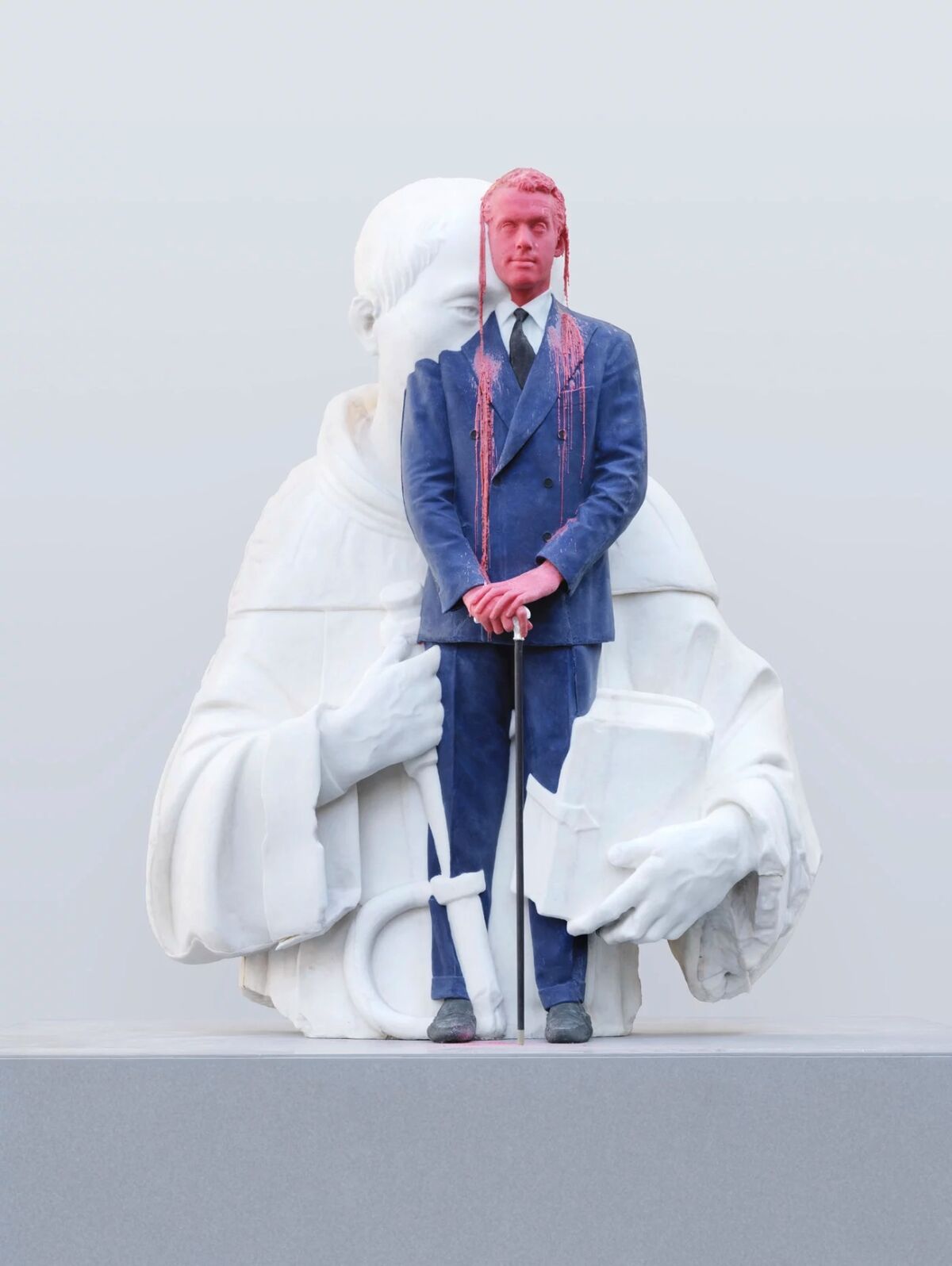 To top that this year, Gagosian curated a booth of sculptural work that, as a release put it, “confronts the viewer with a group of artificial bodies: human and animal, hyperreal and abstract.” Among the treasures in the makeshift indoor sculpture garden was
Urs Fischer
’s Marsupiale (2017), a wax sculpture of the European
Old Masters
dealer and contemporary collector Fabrizio Moretti emerging from the bust of San Leonardo—the prized work of his collection. (Like other Fischer wax sculptures, it can be melted down, and then reproduced for the owner for the cost of fabrication.) It sold for a price in the high six figures. And then there was Chris Burden’s Sex Tower (Architectural Model of 125 foot high Sex Tower) (1986), a 10-foot-tall extremely phallic study for a much larger version that has, sadly, never been built.
“There’s a very serious and very educated base here, and we want to engage with that audience—and not just collectors, but Kunstverein [German art non-profit associations] directors, curators, writers,” said Gagosian’s Jona Lueddeckens, who helped put together the booth. “That’s specific to the art fair in Cologne.”
Beyond sales, he said it was a success in terms of “enabling conversations about the artists we show here.” Not every conversation was such a productive dialogue: Installed on the floor of the booth was
Piero Golia
’s The Dog and the Drop (2013), which is an animatronic model of man’s best friend, and when a real canine visitor to the booth spotted the lifelike work, it started barking its head off, trying to get any kind of response. 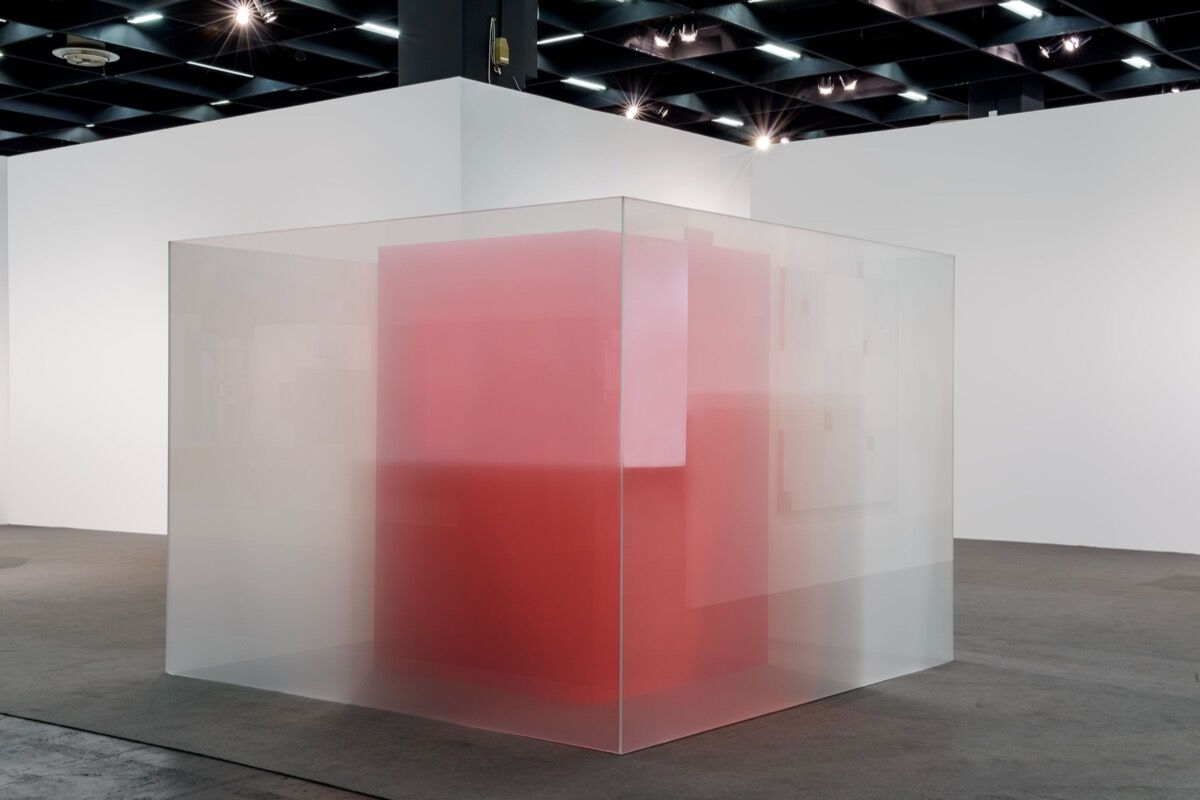 Hauser & Wirth went with a themed booth, as well, focusing on
Mary Heilmann
,
Larry Bell
, and
Takesada Matsutani
, three artists who all have institutional shows this year.
“Even if you wouldn’t normally relate them to each other, if you look around, there are a bit of similarities in the work,” said Hauser & Wirth’s executive director, Florian Berktold. “The booth is titled ‘Waves and Particles,’ which is an early work by Mary Heilmann, and light is waves and particles at the same time, just like Larry Bell’s glass boxes are solid and liquid at the same time.”
The large glass box work was still for sale on Friday for $525,000, but the gallery sold three works by Heilmann, priced between $40,000 and $395,000, and three Matsutani paintings had sold for $85,000 each. 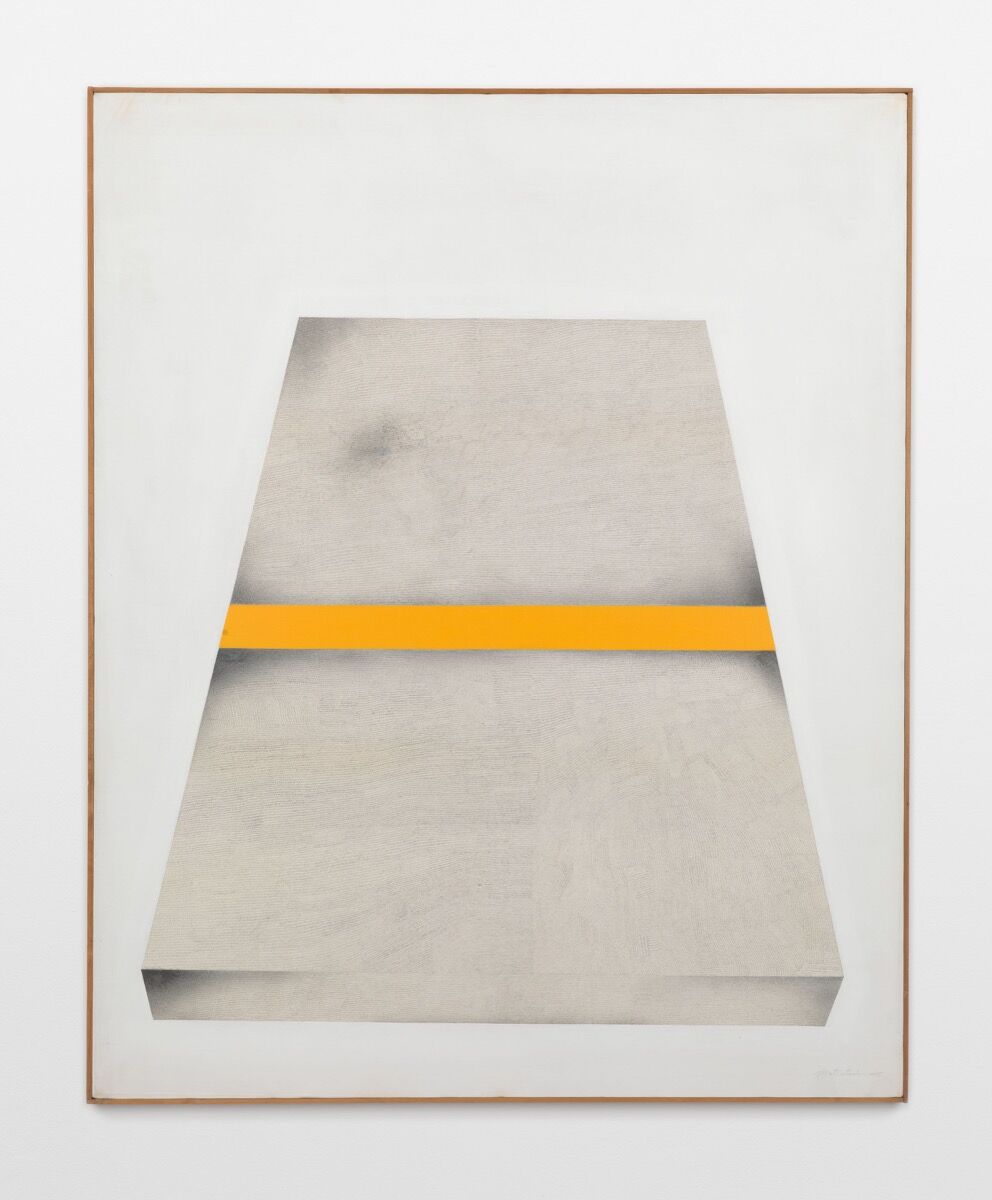 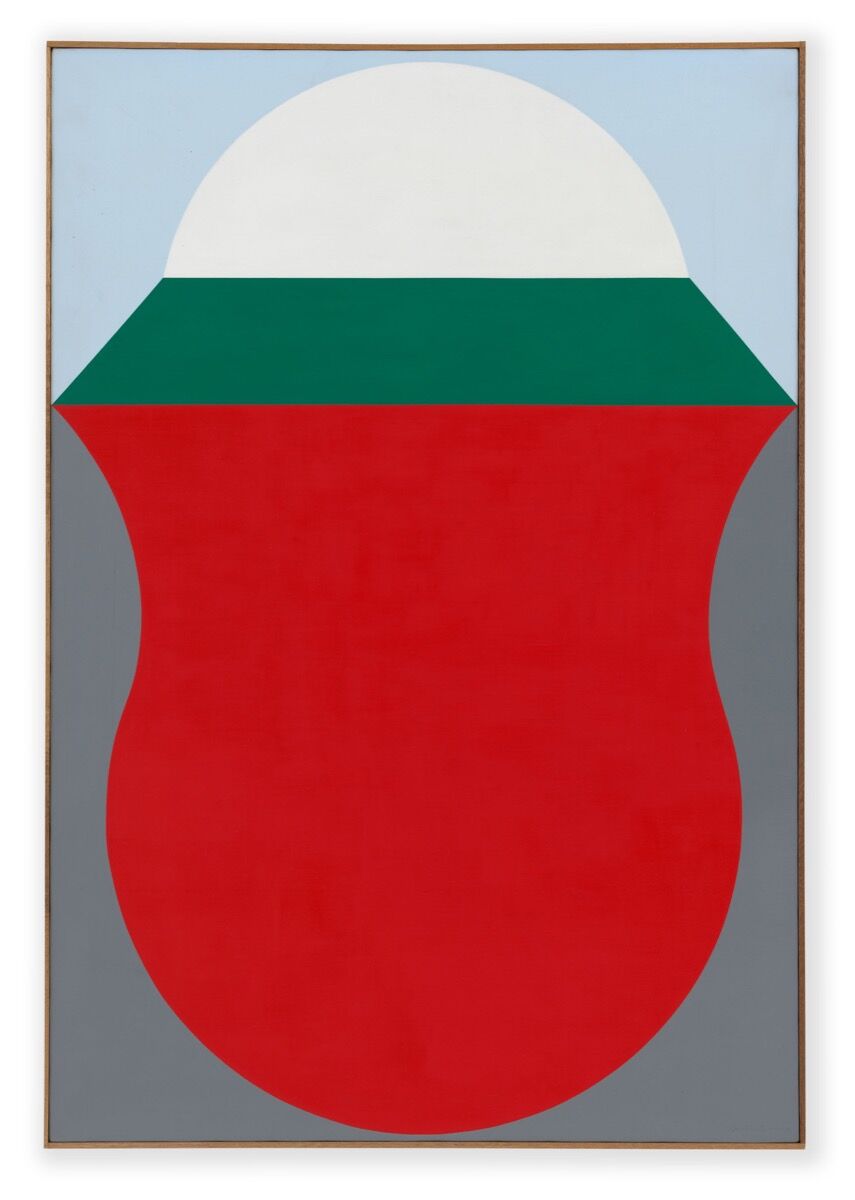 “The Basel Art Fair is different, same with Frieze London and New York—they are destination fairs,” Berktold said. “Cologne is a bit different. It’s not like you ask around—‘Oh, are you going to be in Cologne next week?’ We come here for the German audience, for the German institutions, and the German collectors.”
One such German collector was Eugen Viehof Jr., the Westphalian supermarket billionaire who has a collection of more than 1,000 works, and who put some of his acquisitions from the past decade in a show at the Langen Foundation, the nearby Neuss-based museum designed by Japanese starchitect
Tadao Ando
. Viehof said he still comes to Art Cologne each year looking to buy.
“We’re going mainly to the European fairs, and sometimes to New York, but you have to be here [in Cologne]—as a collector you have to be here,” Viehof said. 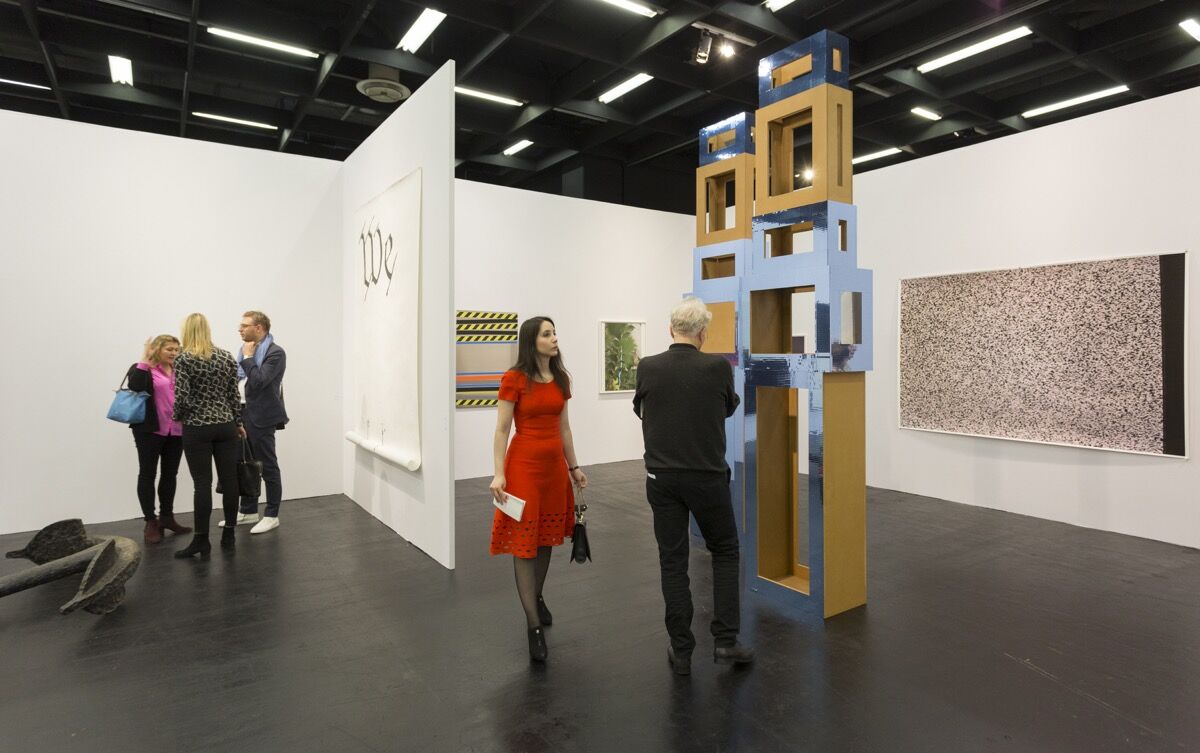 Other German galleries also notched six-figure sales. Daniel Buchholz, who is based in Berlin and also has an outpost in New York, sold an 11-foot-tall two-part untitled Isa Genzken sculpture for €400,000. And König Galerie, also based in Berlin with a London space that opened last year, sold a 2017
Katharina Grosse
painting for €170,000.
Hans Mayer, the legendary dealer—he participated in the first edition of the fair over 50 years ago, and famously brokered the influential meeting between
Andy Warhol
and
Joseph Beuys
—had sold multiple works by
Tony Oursler
at his booth, which he personally manned four days into the fair, long after other gallery namesakes had departed the Koelnmesse. When asked how the fair was doing after all these decades, Mayer said the design had never been better; he loved the new lounge area; and the new color scheme—with the building’s interior walls painted black, thus diverting the eyes to the white booths—was a big improvement.
But the dealer, approaching his eighties, had not taken his eye off the prize.
“Business is good, and that’s the main thing,” Mayer said.
Nate Freeman
Related Stories