Exterior view of Art021, 2017. Photo via @galerieperrotin on Instagram.

When art industry insiders say “Chinese collectors,” they’re often referring to the tycoons of unimaginable wealth who are dotting the mainland with private museums in Beijing, Shanghai, and many lesser-known cities spread across the country.
But some dealers say this shorthand ignores a more expansive definition of “Chinese collector,” the burgeoning and massive class of newly wealthy individuals coming into their peak years as consumers, who already conceive of contemporary art as an integral part of their lifestyle. Nurturing and capitalizing on that bigger opportunity, they say, takes a bit of a leap of faith—but judging by the sales and the discussions at Art021, the opportunity is only going to grow.
Five years ago, a forward-thinking Shanghainese trio—Kelly Ying, David Chau, and Bao Yifeng—spotted this opportunity early on, launching the Art021 art fair specifically to go after this new audience.
“We wanted to bring an international culture project to China,” said Bao. “Among the three of us, we tried to bring in this new crowd, to help them become collectors.”
They each brought complimentary skills, backgrounds, and most importantly, networks. Bao comes from the fashion PR world. He not only has experience pulling off complicated, large-scale productions at short notice (the first edition of the fair in 2013 came together in just three months), but also a long list of clients who were routinely buying handbags and other luxury goods that cost more than many works available at Art021. Chau’s investing background means he is close with the current generation of entrepreneurs with bank accounts freshly plump from big IPOs. Ying brought both an acumen for sales and the art world (she’d previously worked at luxury publishing giant Modern Media), and personal connections to many of the sons and daughters of China’s first generation of entrepreneurs—young people who were, at the time, just beginning to return from studying in the West where they had developed a taste for contemporary art.
No surprise, then, that dealers at the fifth edition of Art021 often describe the clientele as  “young” “fashion-led,” and “lifestyle-centered.” But there’s a nuance in how those words were uttered: Those among the 104 dealers here (the fair will launch a Beijing edition in May) who used those terms disparagingly, or brought lower-quality work than they show elsewhere, tended to not have that much success this week. Others, whether international or domestic, who see those qualities as an opportunity for long-term investment in cultivating and educating clients (and even helping shape a new contemporary art culture for China), enjoyed significant success. David Zwirner, which will open a location in Hong Kong’s H Queens building in January, exemplifies the latter approach. The gallery tapped one of mainland China’s most beloved young dealers, Leo Xu, to direct the space along with former Christie’s VP Jennifer Yum. Xu suggested the gallery sees its role here not in the span of years but in decades.
“It’s a long-term project,” he said, one that has already begun with Zwirner’s participation in Asian fairs and shows he has organized for the gallery’s artists in Asian museums. “It’s now about how we push forward and connect all the dots,” he said.
Xu said he hopes to connect the dots along the spectrum of collectors present at Art021. They ranged from mega-collectors with museums to young people just starting out, and others who are interested but can’t yet afford to buy a work. He’ll take an approach much like he did at his former gallery, Leo Xu Projects, with extensive programming outside of the white cube itself, aimed to reach as wide an audience as possible. He’ll be working with cities and real estate developers to increase the amount of public art on view across the continent and to work with schools and academies on educational initiatives.
“It’s about bringing art to the people, not building a exclusive membership club,” he said. “Hong Kong will be the headquarters for the gallery, but Asia is our canvas.”
At the fair, Zwirner sold
Lisa Yuskavage
’s painting Scarecrow (2012) for just under $1 million,
Rose Wylie
’s two-part canvas Yellow Man & Liquer Bottle (2017) for $80,000, four new works by
Lucas Arruda
for between $45,000 and $55,000, and pieces by
Neo Rauch
,
Marcel Dzama
, and
Raymond Pettibon
. The young Brazilian painter Arruda recently closed his first show with Zwirner in London. 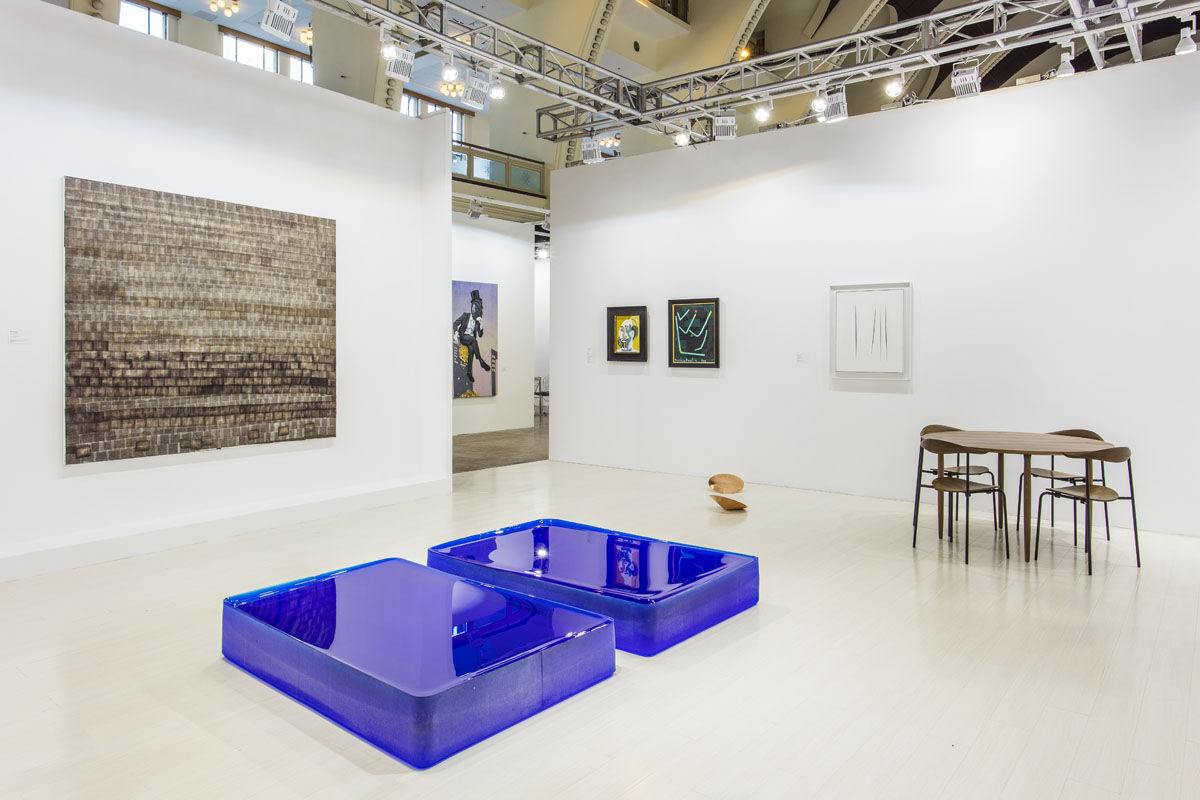 Installation view of Hauser & Wirth’s booth at Art021, 2017. Courtesy of the gallery.

Advertisement
The five-figure range seems to be the sweet spot for collectors at Art021. That contrasts to West Bund, where sales in the six figures and above were prevalent at the big, Western galleries. Hauser & Wirth’s sales at Art021, for example, topped out at $950,000 for a work by
Paul McCarthy
and were for the most part in the five-figure range, whereas at West Bund, multiple sales were notched in the seven figures.
Dealers also reported that collectors at Art021 tend to take more time when deciding to purchase a work than they do at other fairs in the region like Art Basel in Hong Kong. “It’s slow. This is the kind of place where everyone wants to shop around and see what’s available” before making a decision, said Nick Buckley Wood, who leads Asia for Galerie Thaddaeus Ropac.
He said having two fairs at the same time causes collectors to take even more time, and that it’s not unusual to be showing clients works at their shipper’s storage facility in the week following the fair. Part of that, he said, is due to the fact that demand and knowledge here for the artists they represent is still building.
“The volume of collectors who are actively buying Western artworks is still much lower” than in the West, he said. “Because the circle is smaller, there’s less urgency to close something on the first day. Maybe it’s also the Chinese mentality of fate. If you get it, you get it. If you don’t, it wasn’t meant to be.”
Indeed, negotiations on several key works were carrying on past Art021’s close, including significant pieces by
Antony Gormley
, who was having a show at mega-collectors Liu Yiqian and Wang Wei's Long Museum.
Bao said the current, slower sales pace has its roots in the freshness of these new collectors’ wealth. “In Hong Kong there is a lot of old money, but here it’s more new money,” he said.
This means that macroeconomic factors, like China’s stock market upheaval last year, more directly impact consumption patterns. While the markets haven’t fully recovered from the lows hit last year, Bao said that people are getting used to the economy’s new normal.
“They’re starting to buy again, but they need more time to make decisions,” he said. “Before people made decisions very fast.” 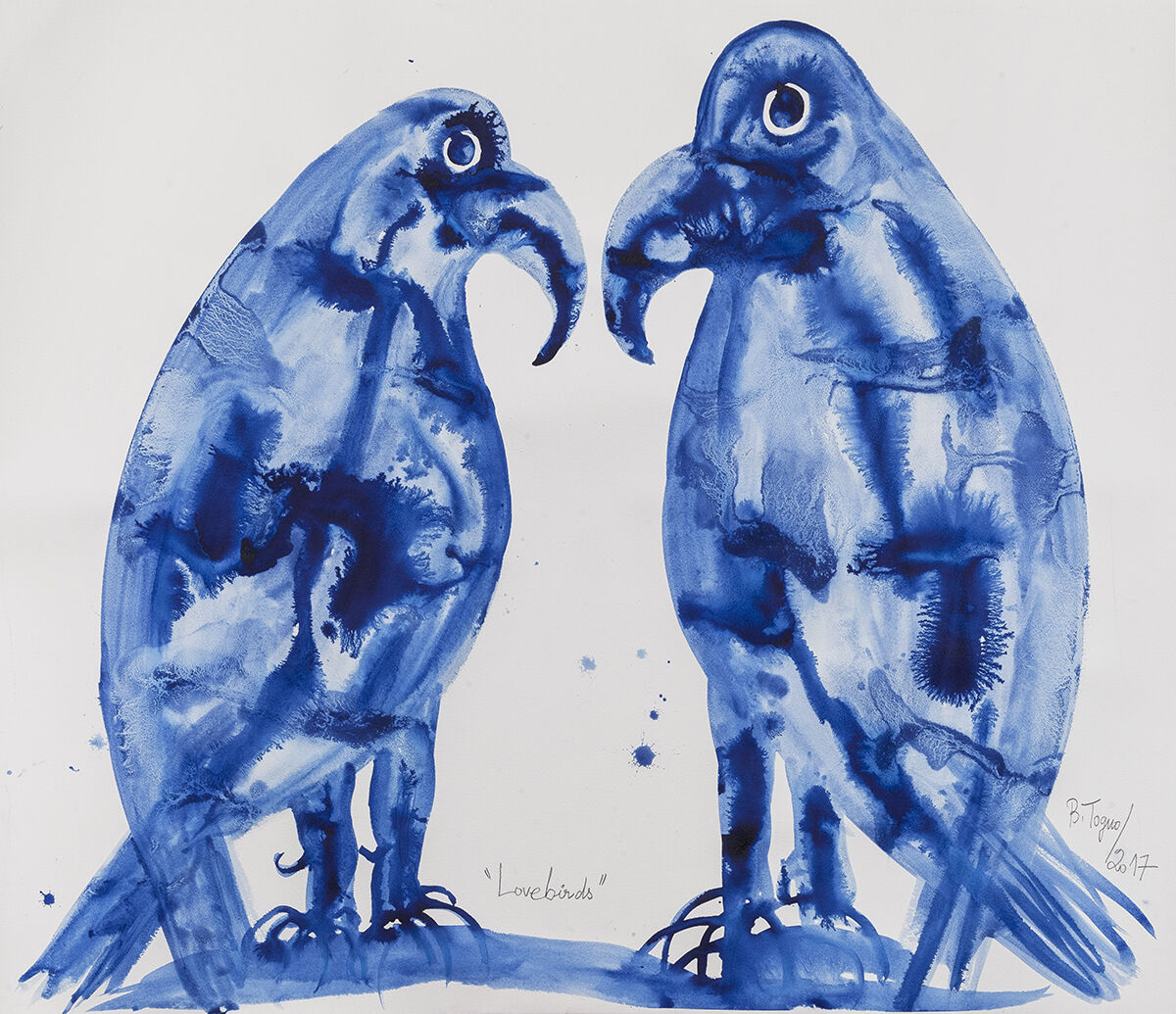 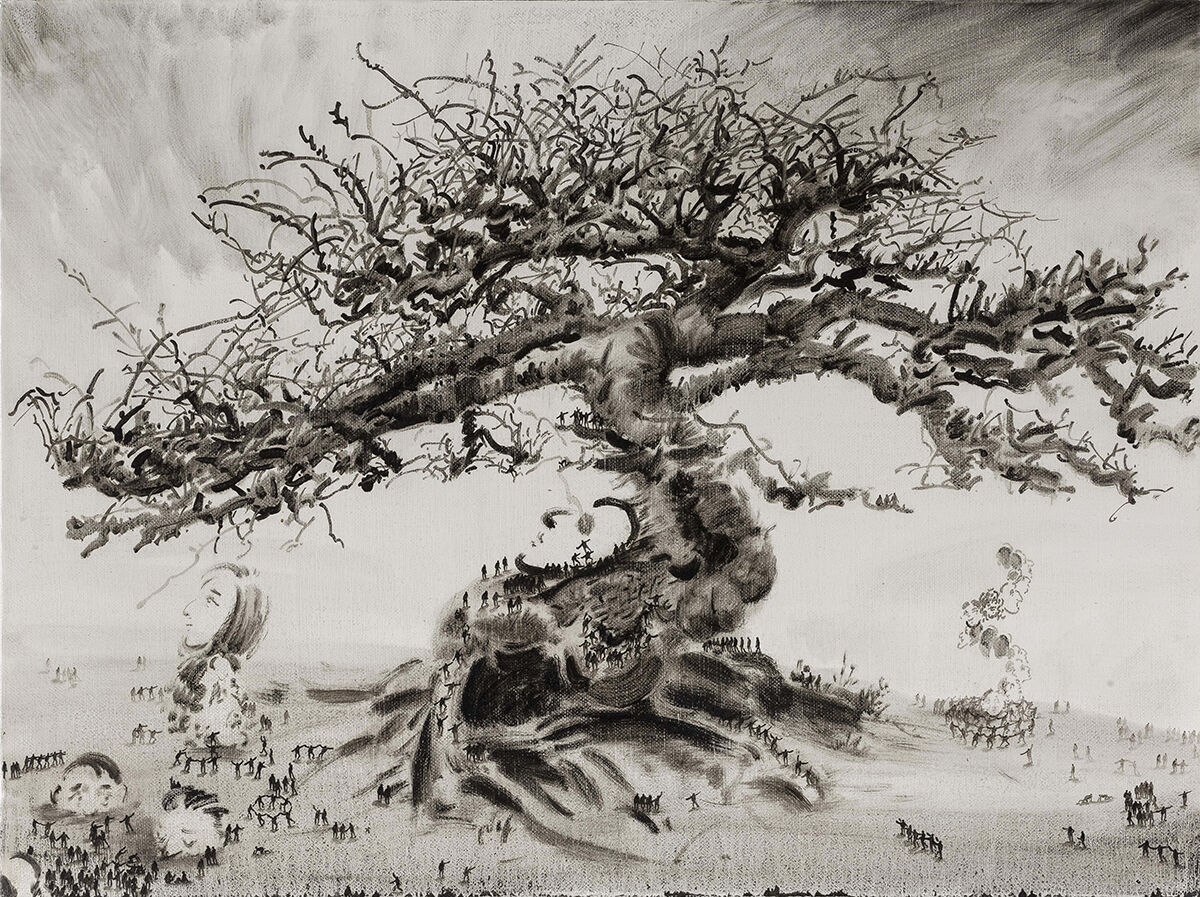 Some local dealers said they were hit particularly hard by the market’s volatility last year. “Because of the economic environment, people didn’t feel it was the right time to buy. They kept coming to shows but they wouldn’t confirm anything,” said Chelsea Zhong of Beijing’s HDM Gallery.
She said that sales were much better at Art021 this year, attributing that improvement to the stock market’s improved performance. The Shanghai Composite Index has risen steadily since May, although it is still trading well below its June 2015 peak.
As of Friday evening, the gallery had sold two watercolors by
Barthélémy Toguo
(Love Birds and Blue Man), two canvases by
Chao Lu
(Elsewhere No. 7 and Elsewhere No. 5) and a mixed media piece by
Wang Yi
(Overlapping 2017-3). Zhong said that economic instability had pushed collectors to purchase emerging Chinese artists due to their lower price points. She placed the level at which the gallery’s collectors are currently most comfortable buying at around ¥100,000, or $15,000 (all USD figures are approximate). 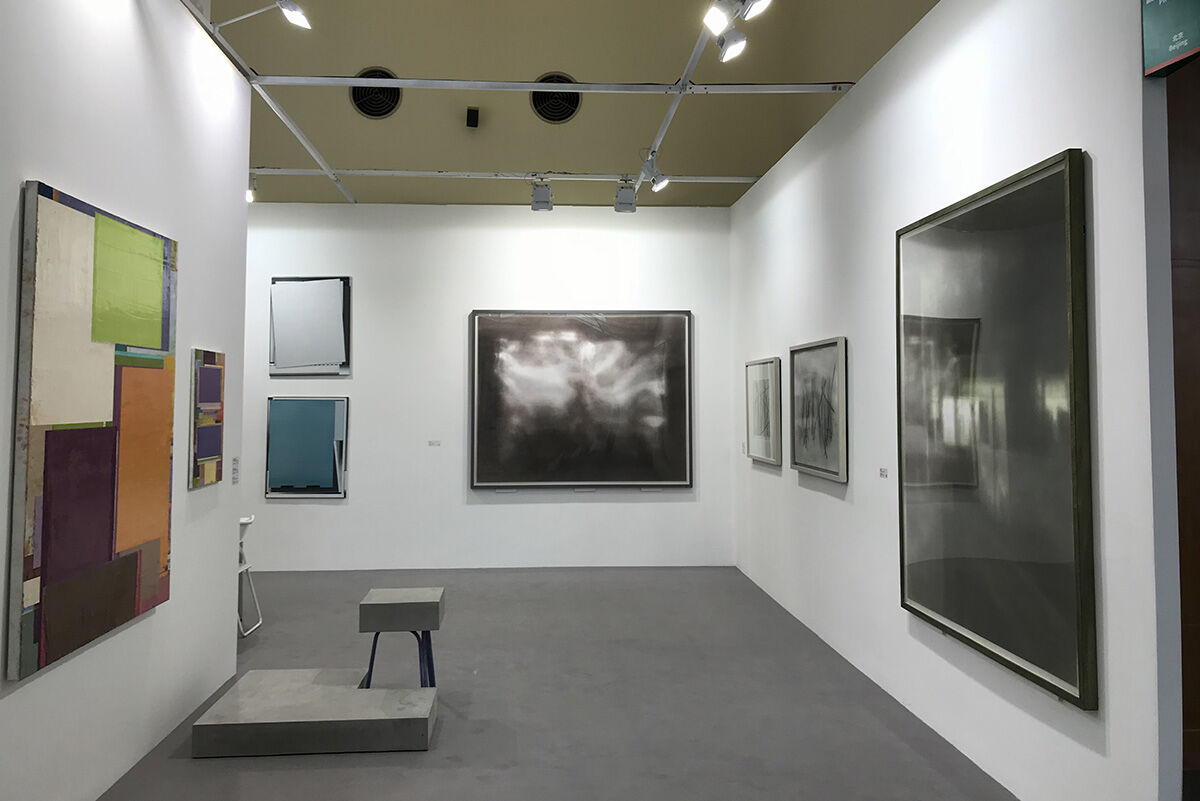 Installation view of PIFO’s booth at Art021, 2017. Courtesy of the gallery.

Founder of Beijing gallery PIFO Dayu Yang agreed that the ¥100,000 mark was also the current price ceiling for most of its young collectors. In order to bring new collectors into the fold, he said the gallery had made a special effort to bring works to Art021 much less expensive than that.
“Young people now are trying to bring art into their life, so we brought a room of small-scale works that are easy to put on your wall immediately after you’ve bought them,” he said.
The strategy was paying off, with three small works by
Kang Haitao
selling for ¥4,000 ($600) each and a piece by
Wang Shilong
selling for ¥5,000 ($750). Two small works by
Enrico Bach
also sold from this room for ¥55,000 ($8,280). Meanwhile, in the main booth, two larger works by the German painter as well as a large-scale piece by Haitao sold to previous clients.
Meeting new collectors was only part of the benefit of participating in Art021 as a domestic gallery, however, Yang said. It was also an opportunity for Chinese dealers to learn how to improve their own operations from Western counterparts, some of whom have been in business since before the end of the Cultural Revolution.
“If you look at
contemporary Chinese art
, the history only started in 1979, and the market has only been around for 10 or 20 years,” he said. Whether from simple things like how to better hang an art fair booth to more complex questions of how best to build a stable of artists that can sustain growth for a gallery in the long term, he said, these lessons could have an outsized impact on the ability for the market in China to continue to grow. 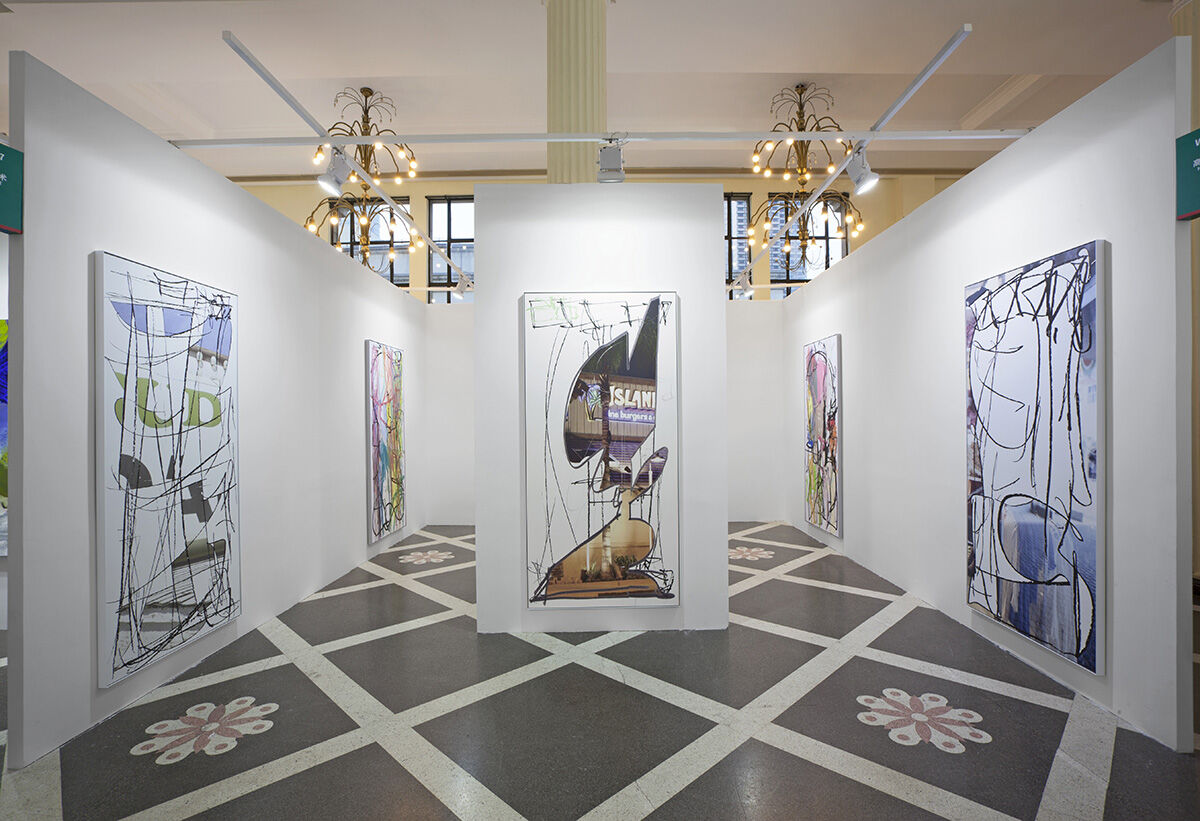 Installation view of High Art’s booth at Art021, 2017. Courtesy of the gallery.

Young Western galleries have also been learning lessons about how to operate in Asia, said the co-founder of Paris gallery High Art (and the Paris Internationale art fair) Romain Chenais. The main ones: persistence and open-minded education.
“Artists that we know and take for a fact in Europe are still absolutely not yet known here,” he said. “You cannot just bring even a big name from your gallery and just expect it to work.”
He attributed the sale of two works from the gallery’s solo presentation of
Aaron Garber-Maikovska
for €35,000 apiece to the connections developed over several trips to the region over the past year. High Art has opted to show at Art021 and Art Basel in Hong Kong over American fairs like Frieze New York, The Armory Show, and Art Basel in Miami Beach in part, he said, because “you see New York collectors everywhere,” but also because of the time and energy Asia takes.
“That’s the one rule to be aware of,” he said, “to be successful here you have to come, come back, come back again, and then the relationships start to build.”
Alexander Forbes is Artsy’s Consumer Marketplace Strategist. He was previously the Executive Editor of Artsy Editorial.
Related Stories