What Sold at Expo Chicago 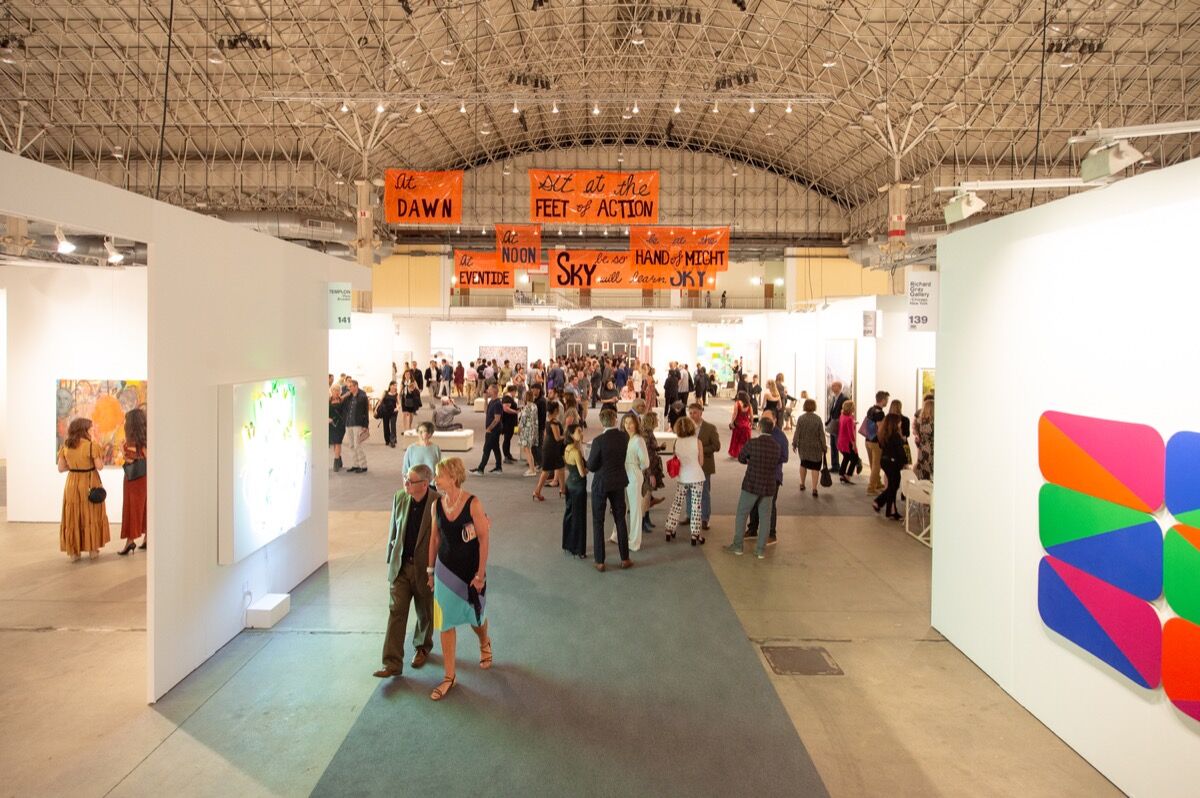 On Thursday, at the preview of Expo Chicago, a gallerist was overheard crying, with champagne in hand: “I hate art fairs! They are so boring.” Then, learning that he was in the presence of journalists, quickly corrected himself, expunged his record, and left the scene.
Whether or not a sense of boredom settled into the grand hall at Navy Pier—host this weekend to more than 135 exhibitors—is an open question. Although many galleries reported presales (an increasingly common though controversial practice), attendance was robust, with well-heeled collectors, curators, museum directors, and artists among the Boxed Water–slinging crowd. By the measure of overall sales, this eighth edition of the international art fair kept most dealers occupied and on their feet, with several booths selling out by the end of preview day. 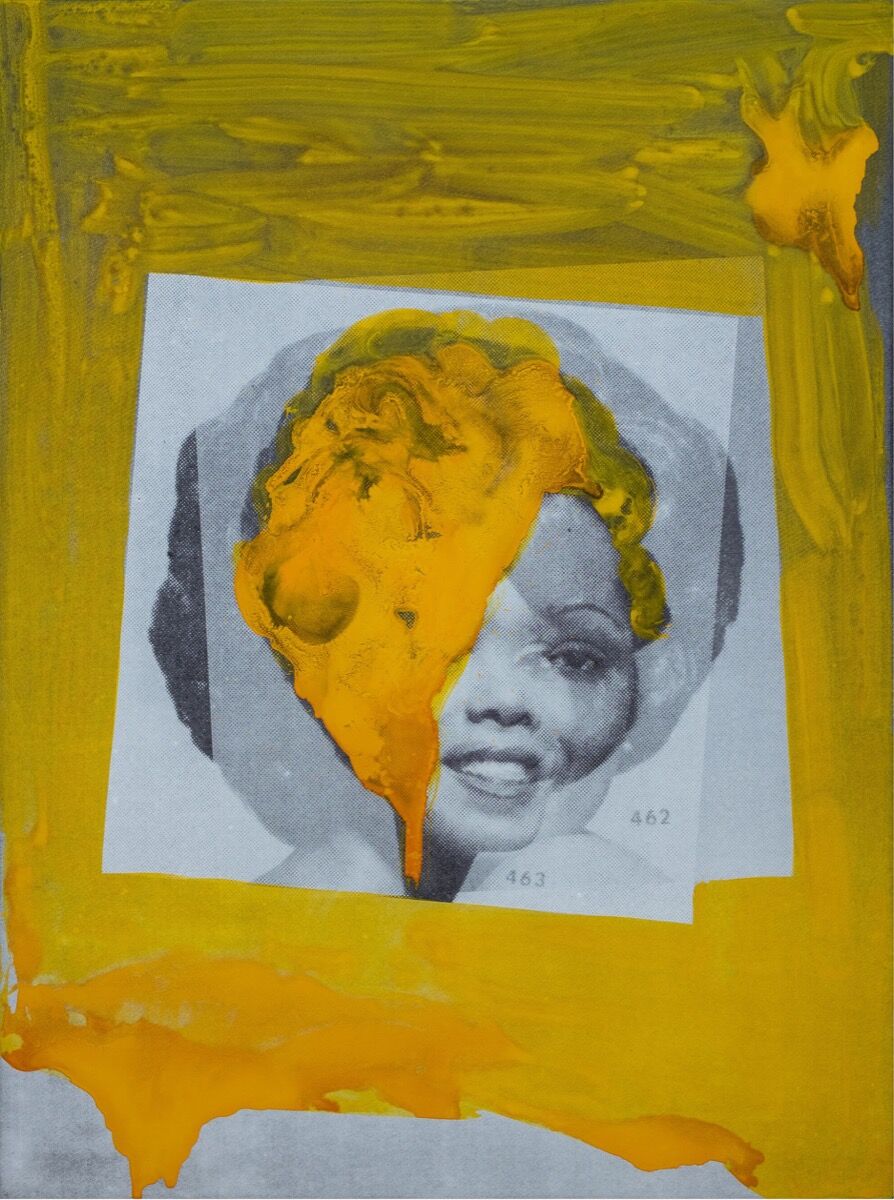 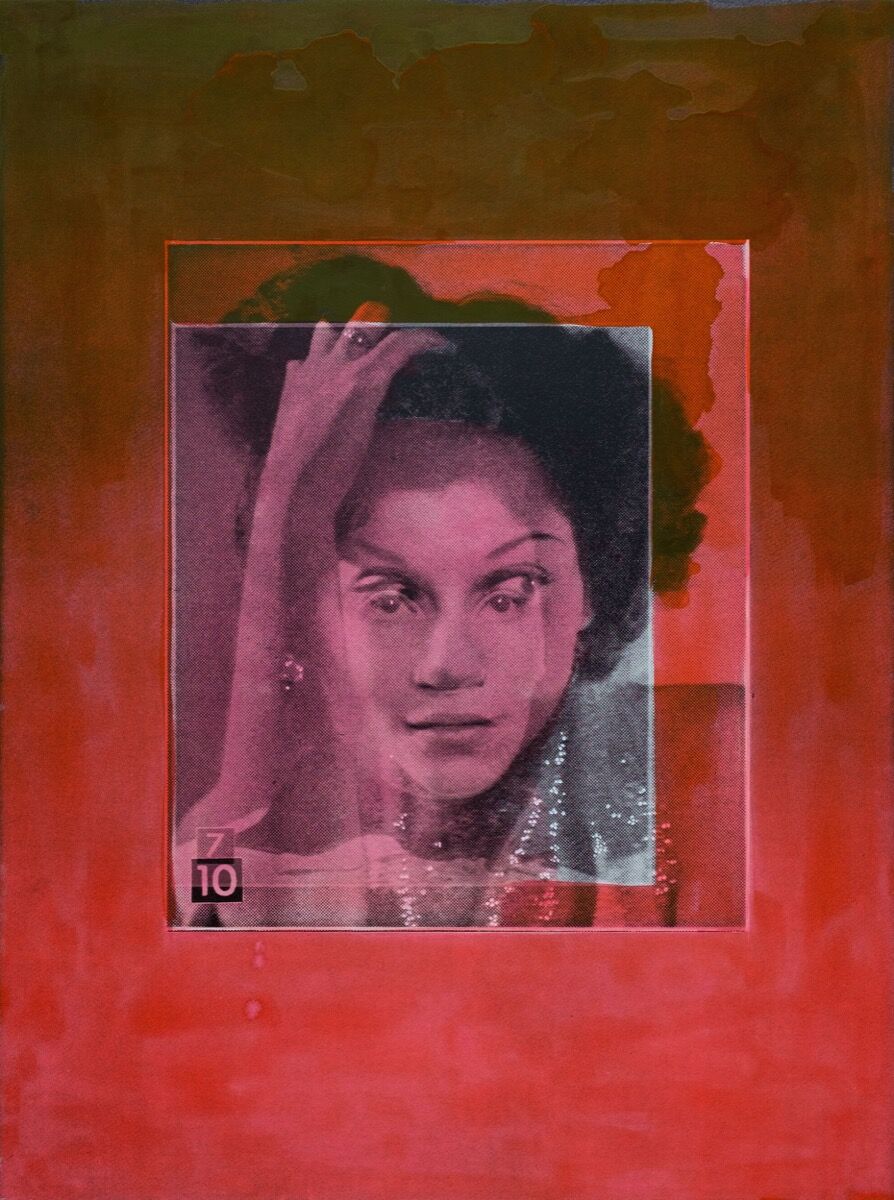 Much buzz surrounded newcomer Hauser & Wirth, which had devoted its spacious booth to 10 recent paintings by
Lorna Simpson
, each priced between $295,000 and $425,000—representing the higher end of the price range at this growing fair. The mega-gallery had debuted a series of more monumental abstract paintings by the revered artist in April in New York City, which clearly generated interest: On Thursday, half of the booth’s works had already been placed in museums as outright or promised gifts. These include the Museum of Contemporary Art, Chicago, which opened Simpson’s first major museum survey in 1992. The remaining five were “placed with superlative collections in the region,” said Cristopher Canizares, the gallery’s senior director.
“We were really pleased not only by our sales activity, but by the pacing of the opening day,” he added. “We had plenty of time to have meaningful, in-depth conversations with our visitors, and the mood was upbeat and engaged without the manic feeling that the first hours of an art fair can sometimes have.” 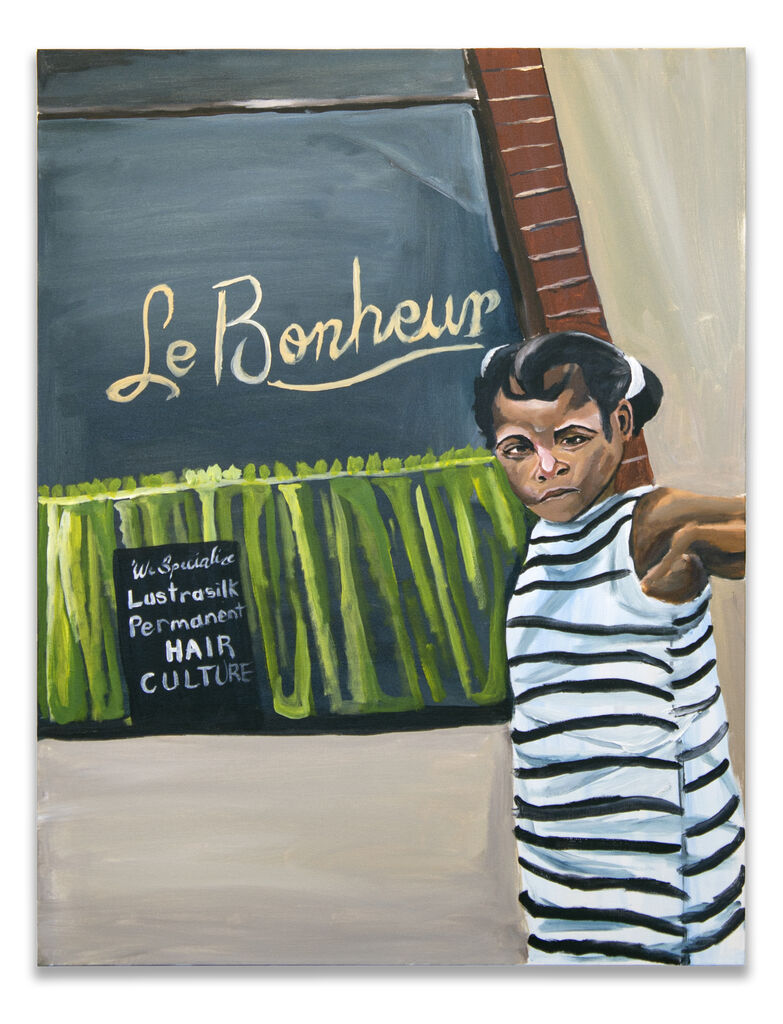 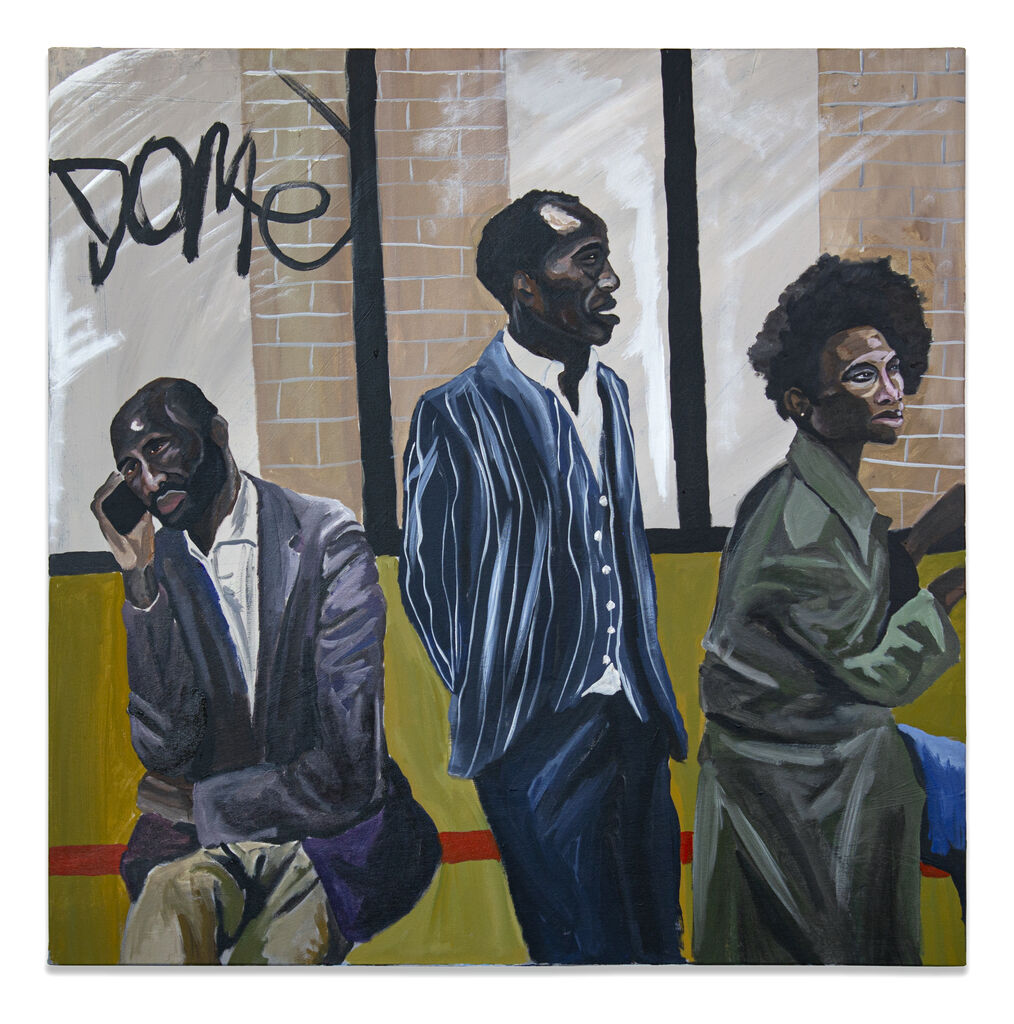 Marcus Brutus
Bus Stop, 2019
Harper's Books
Advertisement
One of the most memorable exchanges quietly occurred at the west end of the fair, where the Reverend Jesse Jackson Sr., visiting during the vernissage, met the rising painter
Marcus Brutus
. Brutus, who is self-taught, had 18 paintings displayed in the booth of Harper’s Books, from self-portraits to scenes of everyday Black life. Ranging in price from $7,500 to $12,500, all sold out by Thursday night, with one purchased by the painter
Eric Fischl
. Jackson himself left with two copies of a recently published monograph of Brutus’s works, titled The Uhmericans.
“It was pretty incredible meeting the Reverend,” Chris Mansour, a director at Harper’s Books, said. “Marcus and Rev. Jackson had a nice private conversation, and Marcus inscribed the books to [him and his son].” 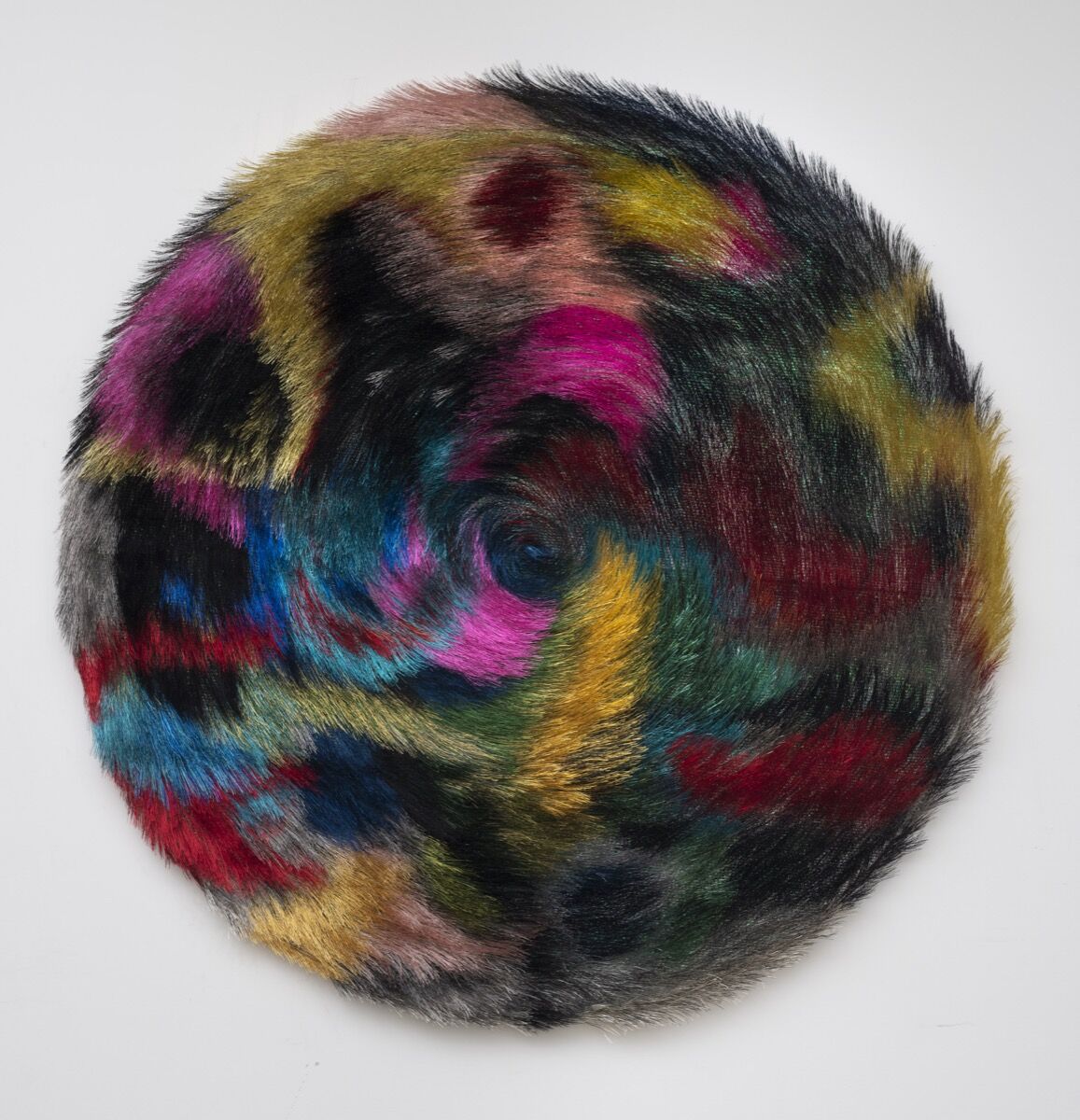 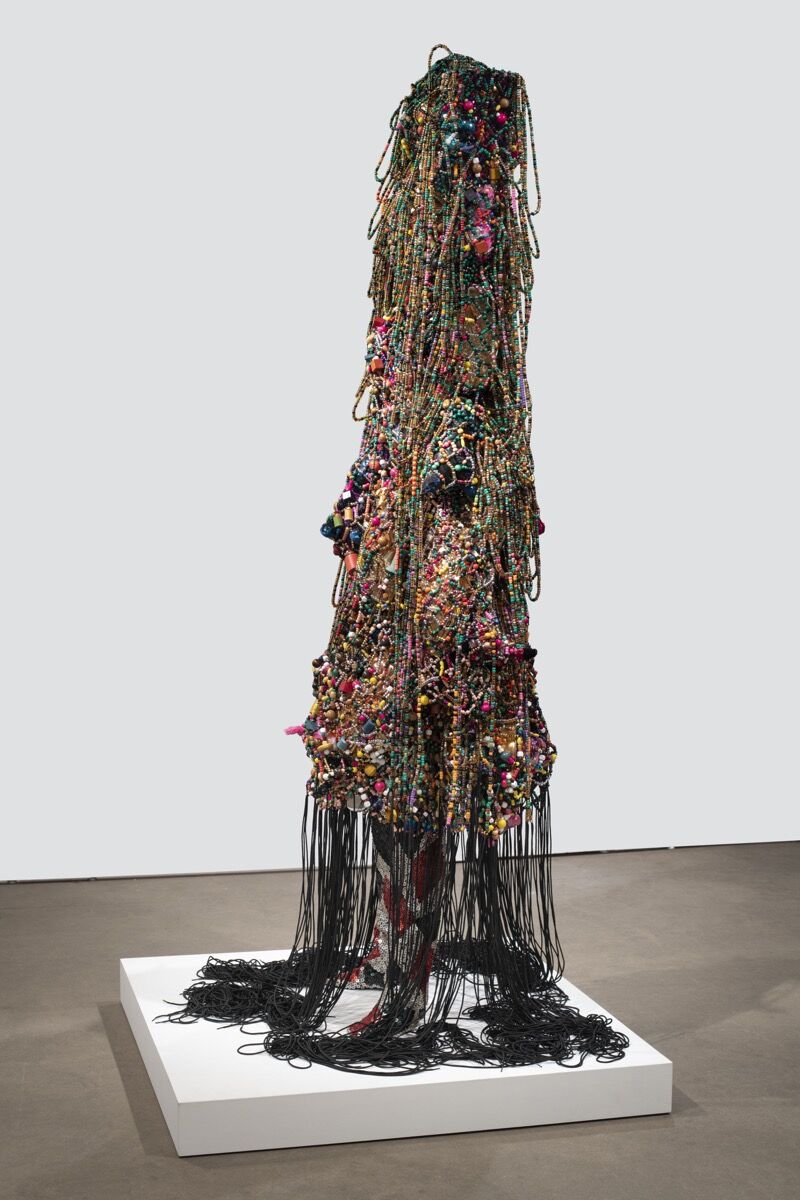 Notably, the Hauser & Wirth and Harper’s Books booths were among several that showed solo displays of Black artists at the fair—perhaps reflecting the meteoric rise of market interest in African and African-American art. At The Hole, every painting of faceless, ink-black figures by
Alex Gardner
had sold by the end of Friday. Los Angeles gallery Kayne Griffin Corcoran brought new sculptures and mixed-media target works by
Hank Willis Thomas
that respond to the prevalence of gun violence. By midday Saturday, four works ranging in price between $10,000 and $30,000 had sold, with some going to museum trustees.
Across the aisle, Jack Shainman (which represents the work of many prominent Black artists) filled its space with vibrant new work by
Nick Cave
, including a “Soundsuit” that incorporated cooking molds. They were so in demand that the gallery was swapping out works by the fair’s second day. 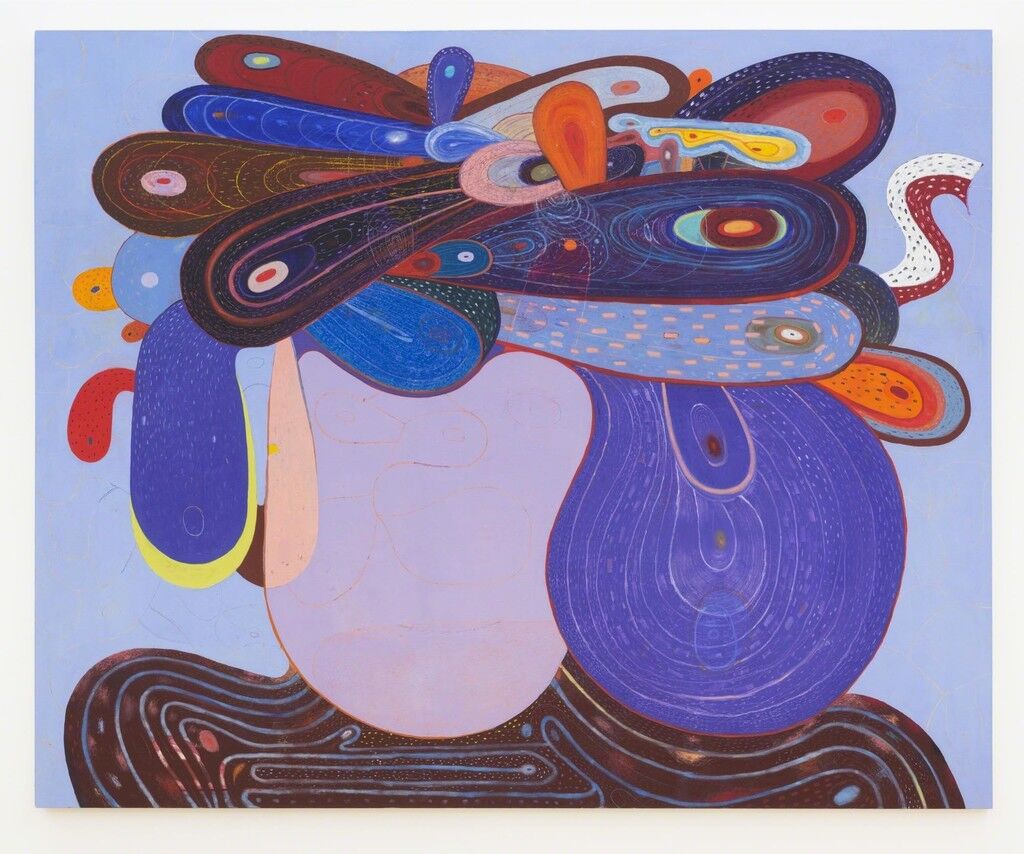 Richard Hull
Dedication, 2018
Western Exhibitions
“This is our first time doing Expo, and we wanted to be able to support and show work by our extraordinary local artist,” said senior director Tamsen Greene. “A solo booth is really unusual for us.” While she declined to share prices, she noted that the gallery “has deep ties to amazing institutions and collectors here that we’ve known for a long time.”
Cave himself, donning athletic wear—including neon orange socks—was easy to spot roaming the fair on Thursday. He made an early purchase at the local gallery Western Exhibitions, which had brought zesty new paintings and sculptures by veteran Chicago artist
Richard Hull
. Director Scott Speh described one series as “explosions of form and riots and color. You see shoulders, heads, circulatory systems.” One small blue painting, pregnant with amorphous forms, had just graced the cover of the seasonal publication Chicago Gallery News; Cave snatched it up minutes into the fair’s preview, for $5,000. 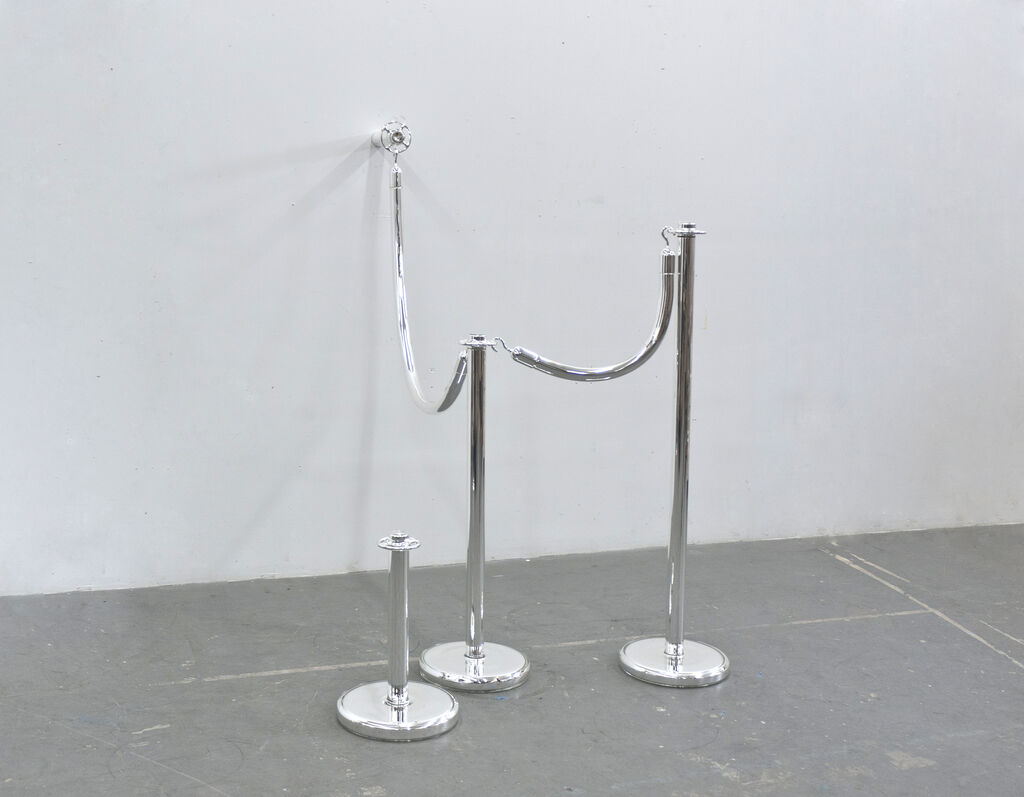 Michael Joo
Untitled, 2012-2019
Kavi Gupta
“His husband is doing a piece at [Kavi Gupta’s] booth, so after they set up, they were walking around,” Speh said. “Nick was like, ‘I think I have to have that.’ I was like, ‘Are you for real?’ And he goes, ‘I am for real.’”
At Kavi Gupta, the namesake director was spotted pouring champagne and entertaining a full booth in the fair’s early hours. By the two-hour mark, several sales were made, including a painting by
Young-Il Ahn
for $40,000; an alluring representation of shiny stanchions by
Michael Joo
for $85,000; and a sculpture by
Jeffrey Gibson
, comprising a skinning board adorned with glass beads, for $80,000. Gibson, the Choctaw-Cherokee artist whose textile works hung prominently at this year’s Whitney Biennial, had more work on view at Kavi Gupta’s gallery, where his solo show—and one of
Kennedy Yanko
’s sculptures—went on view Friday. 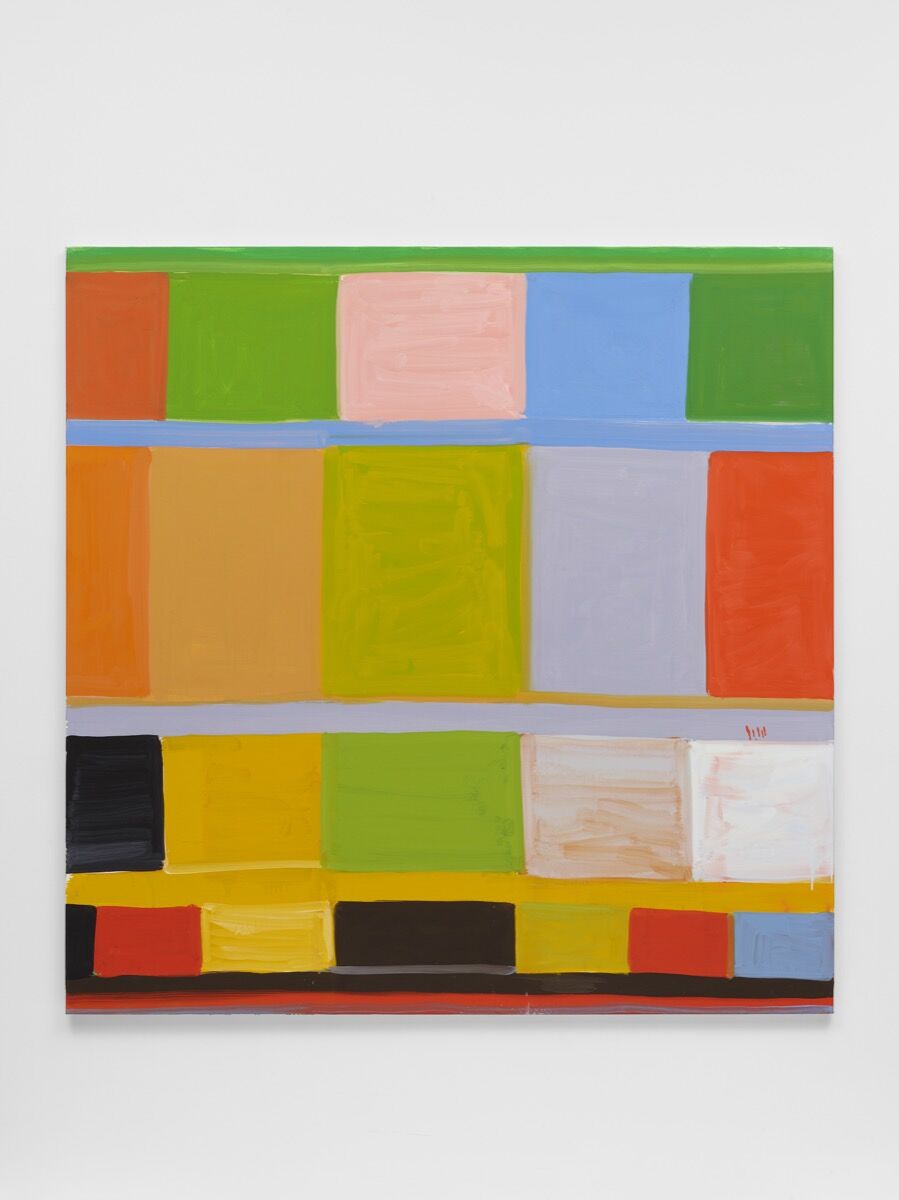 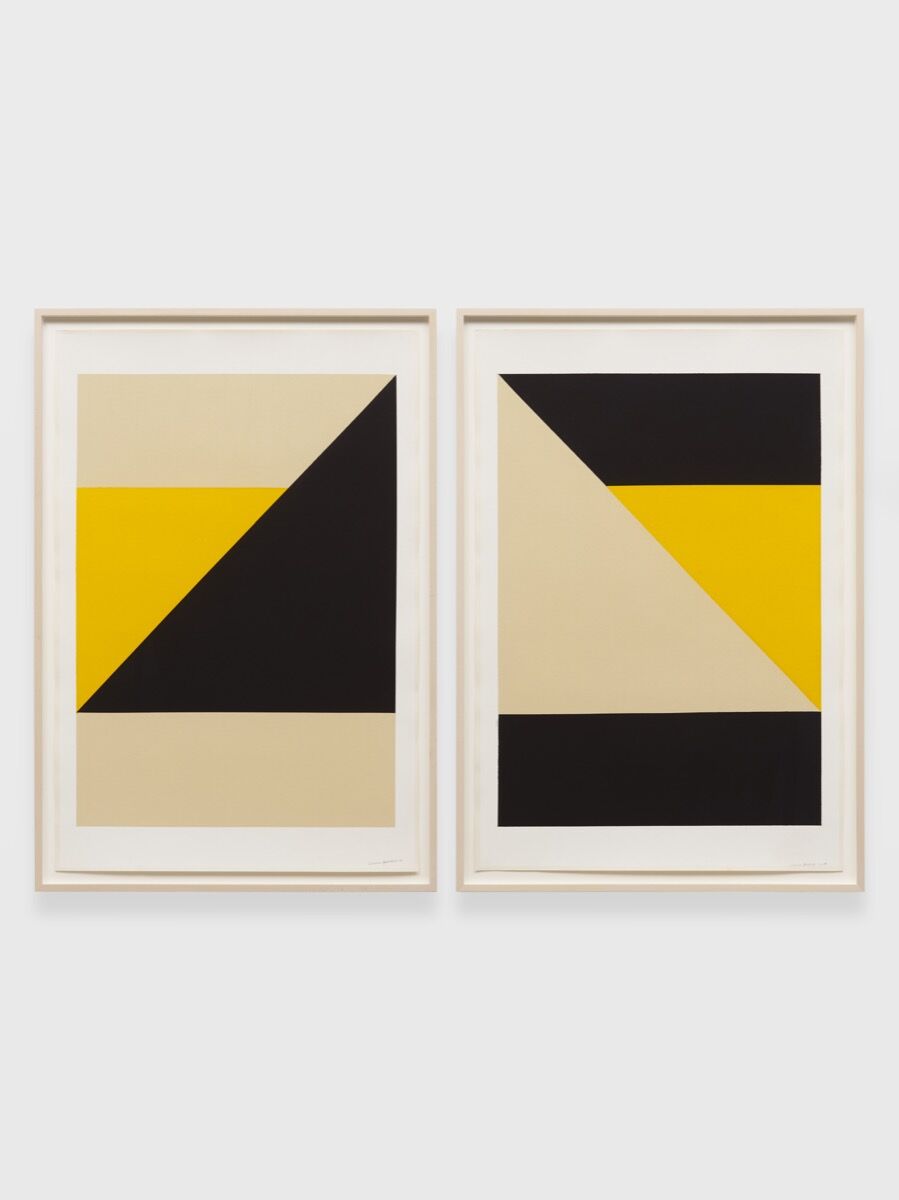 Another Chicago player enjoying sales was veteran gallerist Carrie Secrist, who observed that collectors in attendance were “enthusiastic.” She continued: “Collectors are returning that I haven’t seen in a while—really top, top worldly collectors that are acquiring works without hesitation.” By Saturday afternoon, her gallery had sold several pieces, including a drawing by
Anne Lindberg
for $8,000; a painting by
Andrew Holmquist
for $16,000; and playful works on paper by
Stephen Eichhorn
that range between $5,000 and $16,000.
Fair attendees were also eager to see what the newest gallery in Chicago had to offer. Mariane Ibrahim, which recently moved from Seattle—but has previously exhibited at Expo—brought an exciting group of contemporary Black artists. Portraits by emerging painter
Jerrell Gibbs
, whom Ibrahim recently started representing, were priced between $5,000 and $15,000 each and sold out by Friday evening. “We have started a waiting list for his work,” Ibrahim said. She noted that one of the gallery’s most eye-catching paintings—a portrait by the Ghanaian-born
Amoako Boafo
of Cameroonian musician Steve Mekoudja against a warm, yellow background—was picked up by the Hessel Museum of Art. By the end of the fair, Ibrahim had sold every work in her booth. 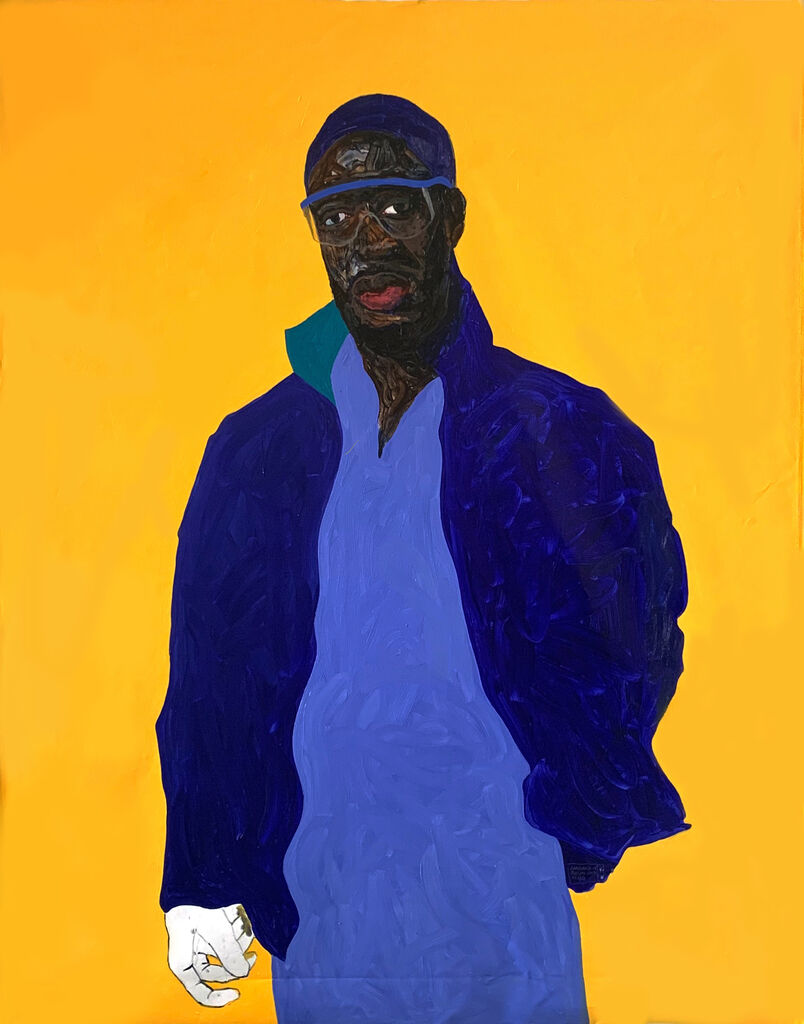 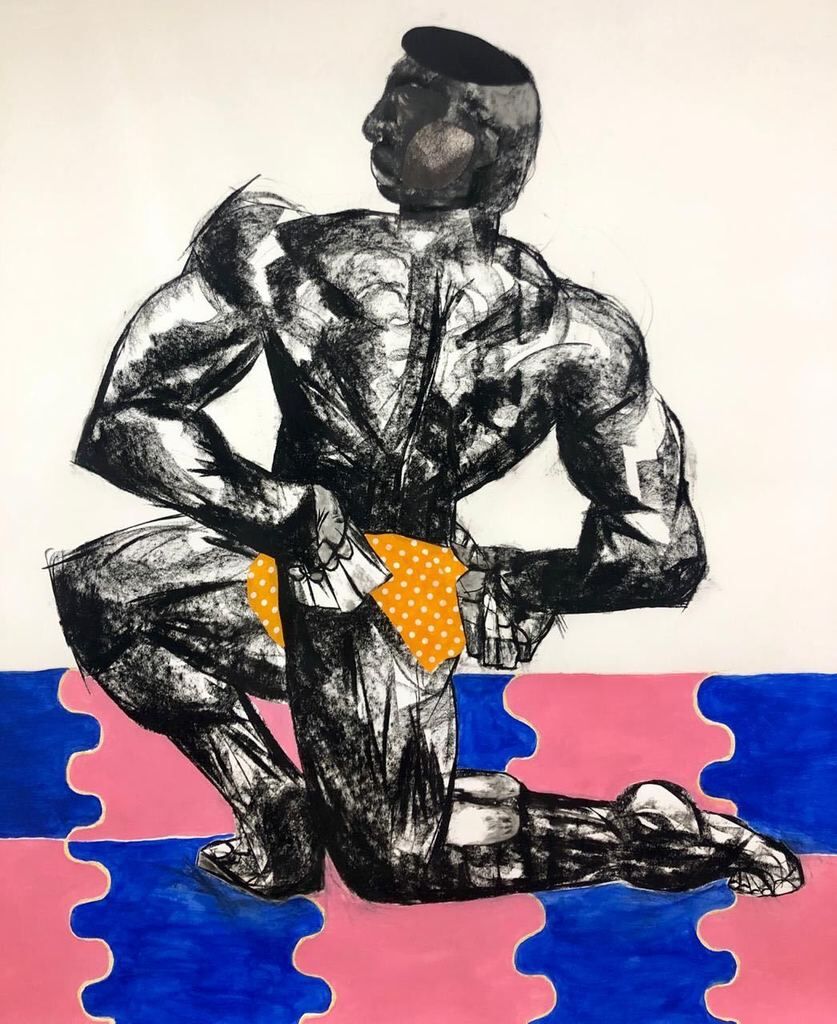 Clotilde Jiménez
Pose No. 2, 2019
Mariane Ibrahim Gallery
Over its lifetime, and under the leadership of director Tony Karman, Expo Chicago has grown a reputation as a fair where galleries expect to receive institutional support, thereby helping to grow new audiences for their artists. For many, this year did not disappoint. Diane Rosenstein Gallery, visiting from Los Angeles, reported acquisitions by multiple institutions of vintage photographs by
Eleanor Antin
. The feminist and
conceptual artist
—and currently the subject of a solo show at the Art Institute of Chicago—had work sell at prices that ranged between $25,000 and $85,000.
Mega-gallery David Zwirner also placed works with a number of “prominent museums,” said senior partner Chrisopher D’Amelio. By the end of the fair’s first day, works by
Roy DeCarava
,
William Eggleston
,
Suzan Frecon
,
Donald Judd
,
Sherrie Levine
,
Wolfgang Tillmans
,
Christopher Williams
, and
James Welling
all had new owners. “It’s hard not to want to come back and exhibit at the fair year after year, given all the top-flight Chicago collectors and institutions who attend,” D’Amelio said. “Happily, this year, we have had some strong galleries join the fair, and it feels as though collectors from regional cities are taking advantage of the Expo opportunity.” 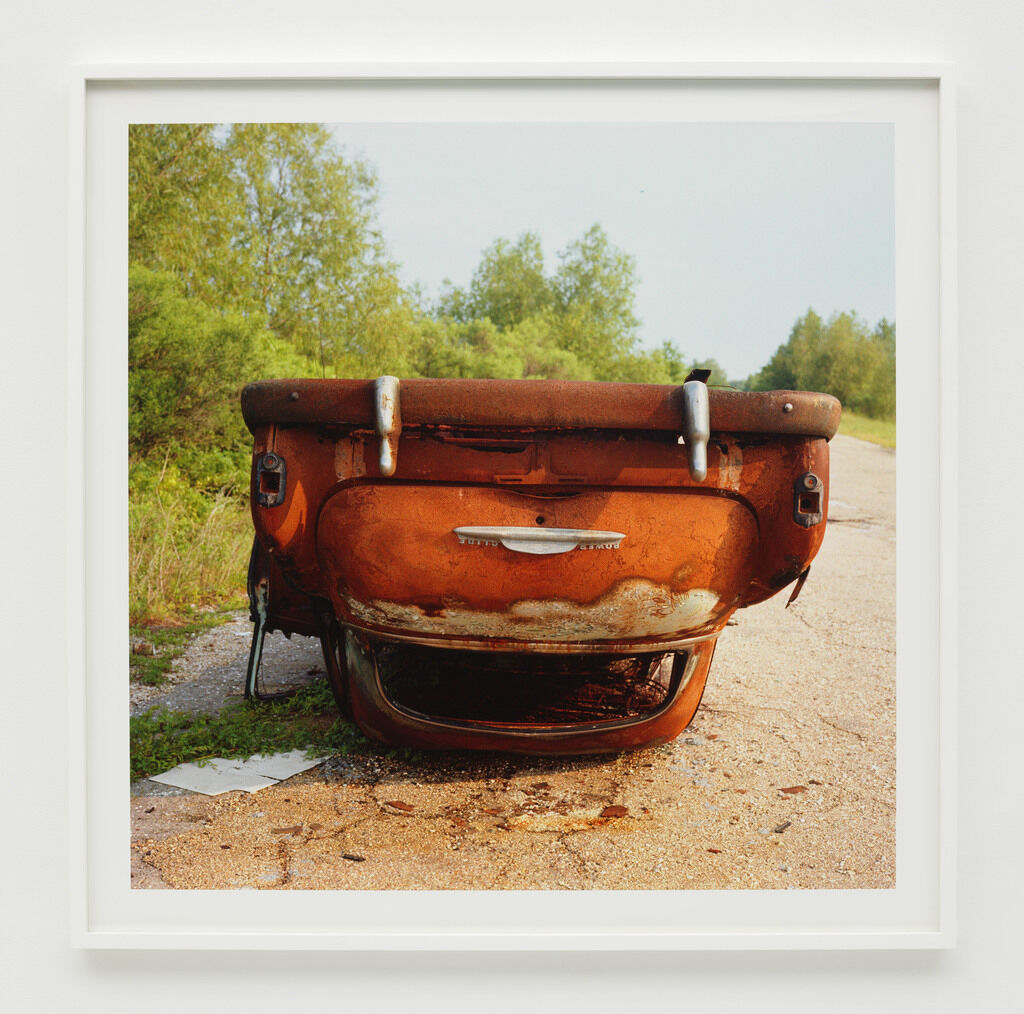 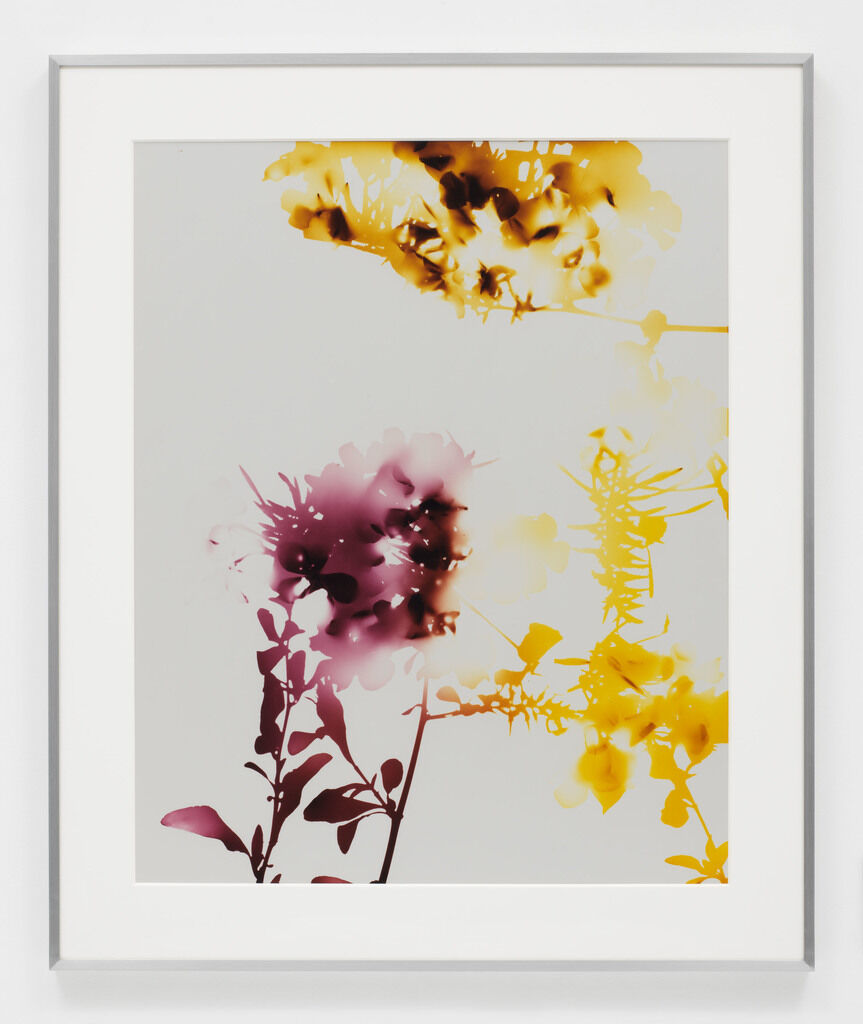 James Welling
#008, 2005
David Zwirner
Another high-profile exhibitor from out of town, Lisson Gallery, notched a number of five- and six-figure sales over the course of the fair. Leading the pack was a large color-block painting by
Stanley Whitney
, On the Way to Summer (2007), which sold for $200,000, and a work on paper by
Carmen Herrera
—the centenarian Cuban pioneer of hard-edged abstraction—for $150,000.
Jessica Silverman Gallery returned to the fair with works by
Judy Chicago
, whose paintings had received interest from museum professionals when the San Francisco dealer brought them to this city last year. This time, Silverman reported success with Chicago’s works on paper, priced between $30,000 and $50,000. “Museums and curators were out in full force, and we look forward to continuing conversations well into the future,” she said.
Six booths away, a presentation of a new body of work by
Daniel Arsham
at Perrotin was also performing well. By the end of preview night, only two sculptures—continuing Arsham’s exploration of fictional archaeology—had yet to sell. Each was priced between $35,000 and $85,000, including a 1990s-era Chicago Bulls jacket made of pulverized quartz. 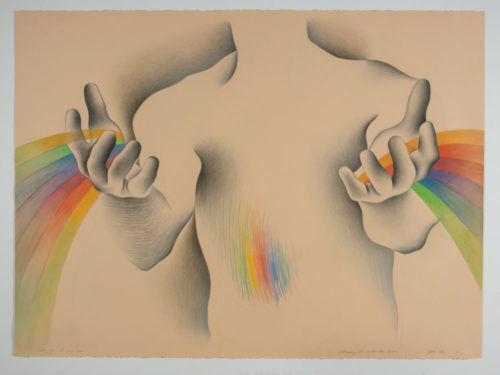 Judy Chicago
Study for Rainbow Man 1: Attracting Her with His Light, 1982
Jessica Silverman Gallery
Whether snapping photographs of Arsham’s seemingly fossilized relics, or of
Anila Quayyum Agha
’s dazzling cubes of light and shadow at Sundaram Tagore, or of Bertram the Pomeranian (more commonly known as @bertiebertthepom), attendees were noticeably engaging with booths around the fair, rather than simply strolling through the mall-like setting and fighting fair burnout. The “palpable energy,” as Secrist put it, could perhaps have gotten a boost from concurrent major presentations in Chicago. The Chicago Architecture Biennial opened the same week as Expo Chicago, as did the inaugural Chicago Invitational, presented by the New Art Dealers Alliance. Some exhibitors suspected that the latter, which tends to promote younger galleries than Expo, might have brought in wider crowds this year.
“Now that NADA wants to do a presentation here, I think more and more people are wanting to come to Chicago,” said Western Exhibition’s Scott Speh. Then he steered the conversation—as so often happens in this city—to good weather. “This is when Chicago shines,” he said. “September is such a gorgeous time for the city. I think people just want to be here.”
Claire Voon
Corrections: An earlier version of this article suggested that one of the works by Lorna Simpson sold by Hauser & Wirth had been promised to the Indianapolis Museum of Art. This was based on inaccurate information and has been removed. Additionally Amoako Boafo’s last name was misspelled.
Related Stories 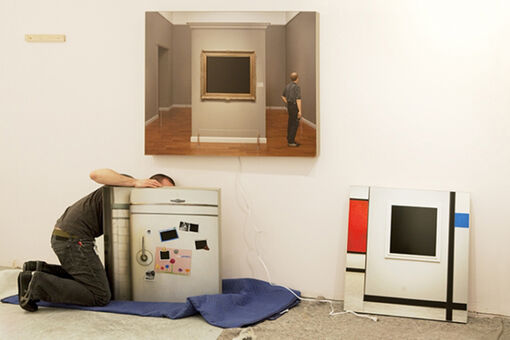