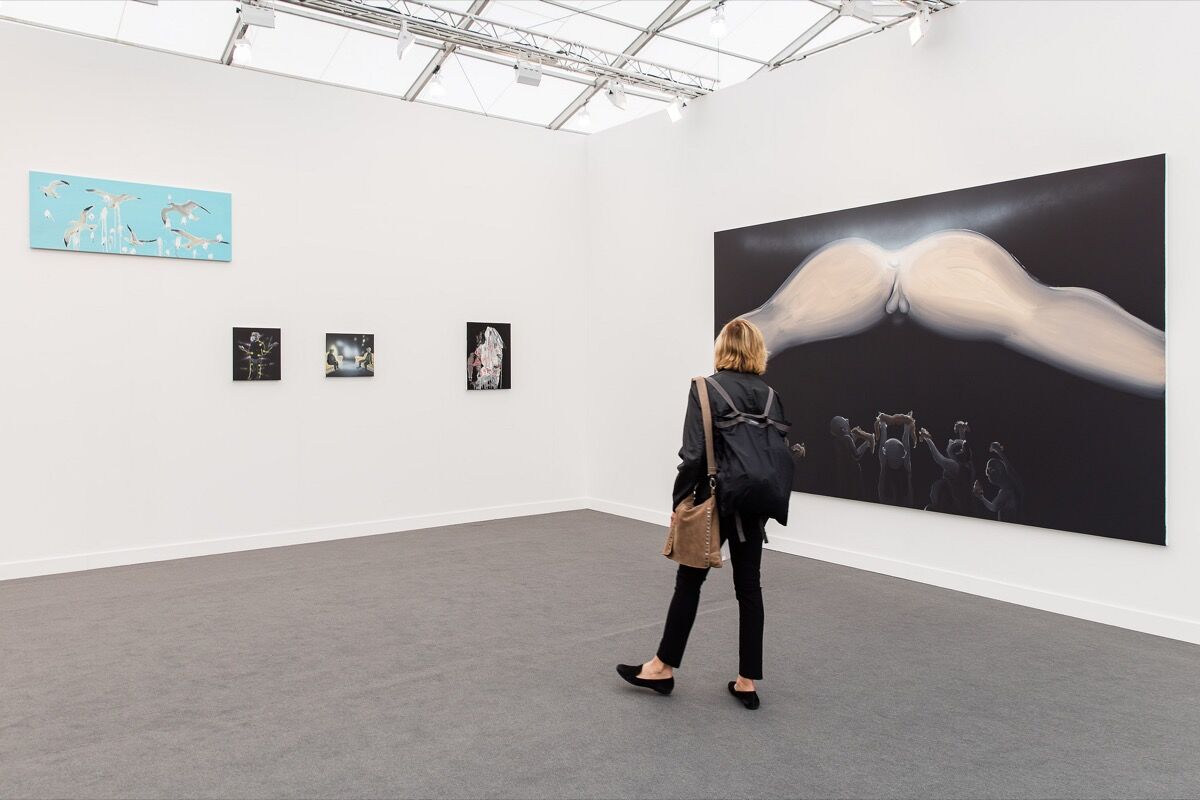 Frieze New York’s signature serpentining white tent on Randall’s Island was as bright and airy as ever this week, but the energy inside was subdued.
This was not unexpected. Frieze this year fell on a week following a string of major European art events, including Art Brussels, Art Cologne, and Gallery Weekend Berlin and just before the opening of the Venice Biennial—with Documenta, Skulptur Projekte Münster, and Art Basel in Basel just around the corner. It is newly decoupled from the emerging art fair NADA (which now takes place in early March, during The Armory Show), but this year coincides with TEFAF New York, an older, genteel European affair. The spring New York auctions are also newly decoupled from Frieze week, taking place two weeks from now to avoid Venice congestion.
With all of that action on the calendar, many said Frieze felt a tiny bit anticlimactic this year, despite reports of strong sales. Adding to that anticlimax, was the fact that a number of galleries seemed to have wrapped up most of their business while the Frieze tent was being set up, hedging their bets by confirming deals with collectors as fair previews were sent out.
Los Angeles’s David Kordansky Gallery sold out its booth of
Tala Madani
paintings, ranging from $22,000 to $110,000 each, to both collectors and institutions, building off momentum from her concurrent appearance in the Whitney Biennial. Gallery director Irina Stark said, “There is a waiting list for the works, so lots of works have been placed while sending out the previews.”
Brazilian gallery Mendes Wood DM had also mostly pre-sold its booth, largely to Brazilian and U.S. collectors who’d put things on hold after seeing them via email and at the gallery’s opening in New York on Tuesday. The works—by
Adriano Costa
, 2016 Turner Prize nominee
Michael Dean
,
Solange Pessoa
,
Sonia Gomes
, and
Luiz Roque
—ranged between $10,000 and $50,000.
“[Collectors] just came to close everything,” said head of sales Martin Aguilera, who is based at the gallery’s New York location (the others are in São Paulo and Brussels).
The bulk of Hauser & Wirth’s paintings and sculptures by American artist
Lorna Simpson
, sold on the range from $150,000 to $300,000 on opening day, going to both major museums and private collections, according to the gallery. It was her first presentation with Hauser & Wirth since she joined the mega-gallery from New York’s Salon 94. 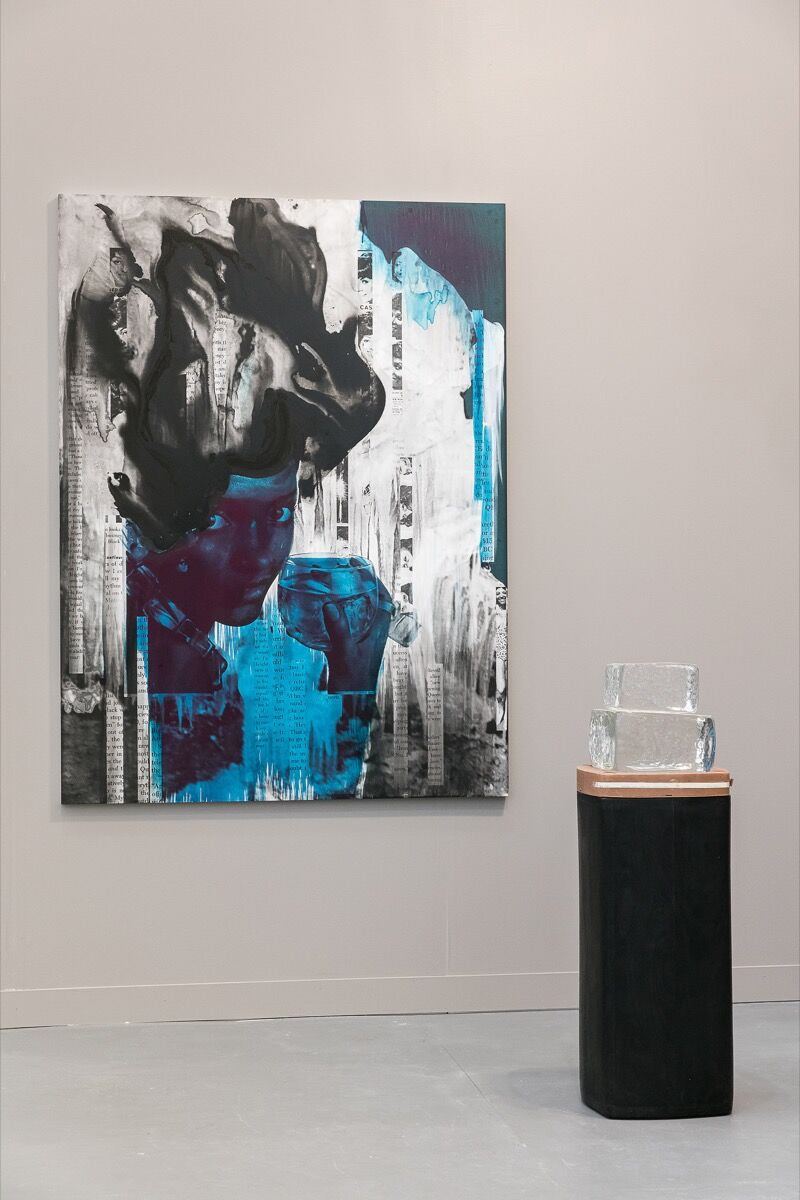 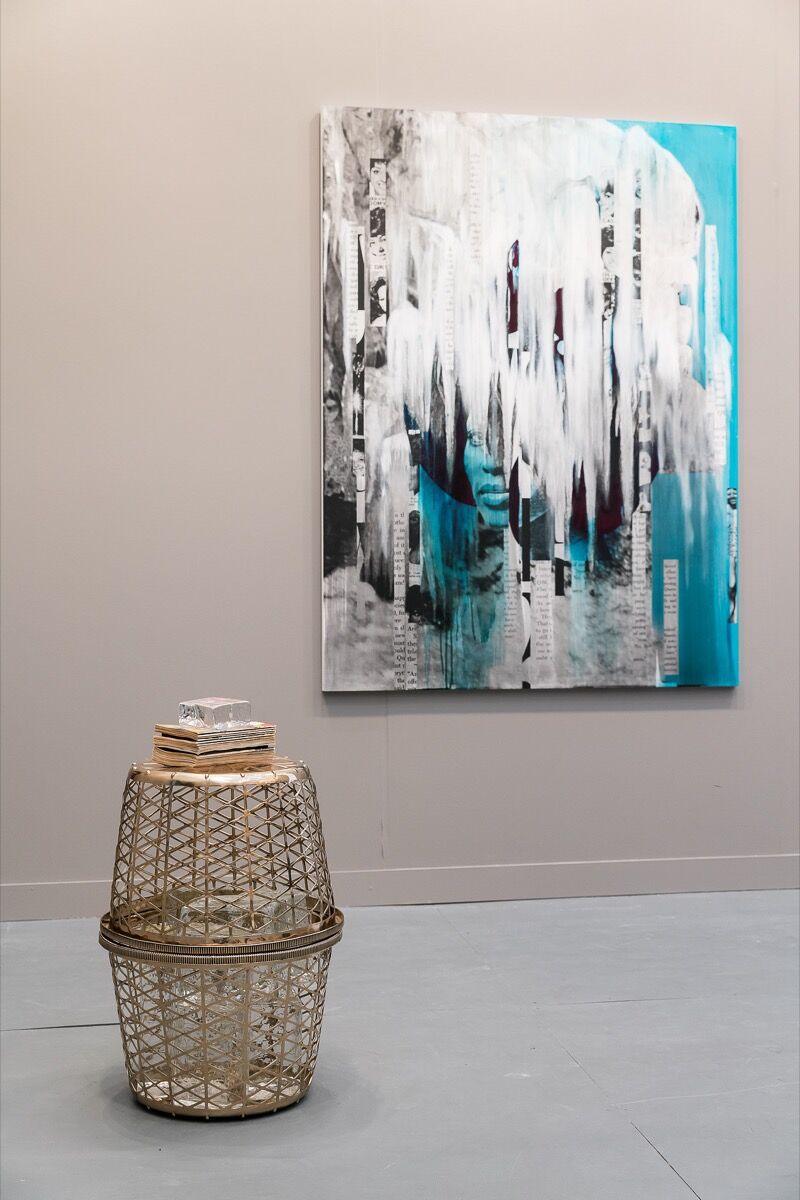 David Zwirner sold out of works by American sculptor
Carol Bove
, who is representing Switzerland along with Teresa Hubbard/Alexander Birchler at this year’s Venice Biennial. The four sculptures and one work on paper went for $50,000 to $550,000. Five photographs by
William Eggleston
, the booth’s other artist, sold as well, for $185,000. They were from his “Democratic Forest” series, and were being shown for the first time since they were shot in the 1980s.
Greg Lulay, a director at Zwirner, said it was difficult to gauge the impact of so many European events on fair attendance, since, as he pointed out, “there’s always something happening in New York,” art-wise.
“The art market is cyclical,” he said. “What Frieze decided to do was look at a moment in New York that had an opening in the calendar, and they chose quite wisely because typically it aligns with the contemporary and modern auctions. This year because of Venice there’s a sort of window in between.”
Jack Shainman Gallery senior director Tamsen Greene described it as “a normal, good fair,” with brisk sales on the opening day, including a large-scale work by
El Anatsui
for $1.1 million, a
mixed-media
work by
Nick Cave
for $75,000, and a work on paper by
Toyin Ojih Odutola
for $40,000. Additional works by
Radcliffe Bailey
,
Hayv Kahraman
, and
Brad Kahlhamer
also sold for undisclosed prices.
At Lehmann Maupin, Californian artists
Mary Corse
,
Liza Lou
, and
Catherine Opie
sold a pair of works each. Two canvases from Lou's “ingxube” series went for between $175,000 and $250,000, two Opie portraits sold in the range of $40,000–$50,000, and two Corse paintings sold for $80,000-$120,000 and $200,000-$300,000 respectively. 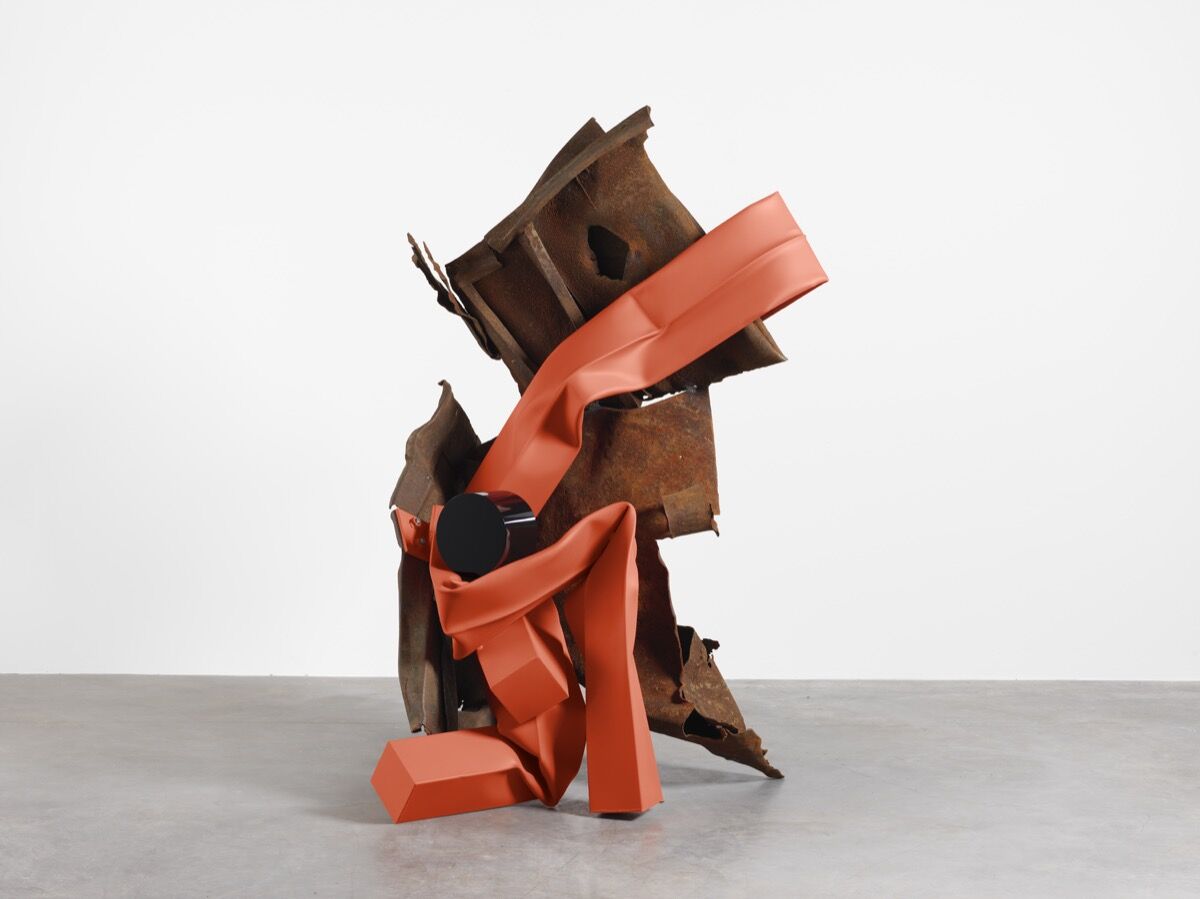 Advertisement
Thaddaeus Ropac’s Frieze New York booth was a rare flash of bipartisanship, with its large-format charcoal work by
Robert Longo
, Untitled (Obama Leaving) (2017), and its smaller portrait by
Yan Pei-Ming
, President-Elect Trump (2017). On the same day the president visited New York for a meeting with Australian Prime Minister Malcolm Turnbull and House Republicans voted to repeal large portions of the nation’s Affordable Care Act, collectors voiced dissent, with Longo’s Obama selling for $550,000 and the Trump finding no takers. A
Georg Baselitz
painting, Bergspitze (2010), went for the same amount, a
Robert Rauschenberg
work on brass sold for $675,000, and the
Jack Pierson
sculpture Pray went for $190,000.
“We sent out the works to our collectors and they confirmed [as the fair opened],” said Ropac, fresh off the opening of a new space in London’s Mayfair, his first away from the European continent. He said most of his U.S. clients were in town specifically for Frieze, as they are more focused on contemporary art than the wider range of offerings at TEFAF. They came from across the U.S.: Boston, Texas, Los Angeles. He noted seeing surprisingly few clients from Europe.
Leo Xu of Shanghai’s Leo Xu Projects brought works by
Li Qing
painted on the glass of antique window frames discarded in the process of Shanghai’s gentrification. Xu was keen to introduce Li, a nominee for the Prix Jean-Francois Prat this year, to New York institutions, and the concentration of East Coast collectors and other U.S. and North American collectors who travel for the fair, even if the fair was less international than it typically is due to the crowded calendar.
“European collectors are not here, Asian collectors are not here, but Americans are here!” he said brightly. 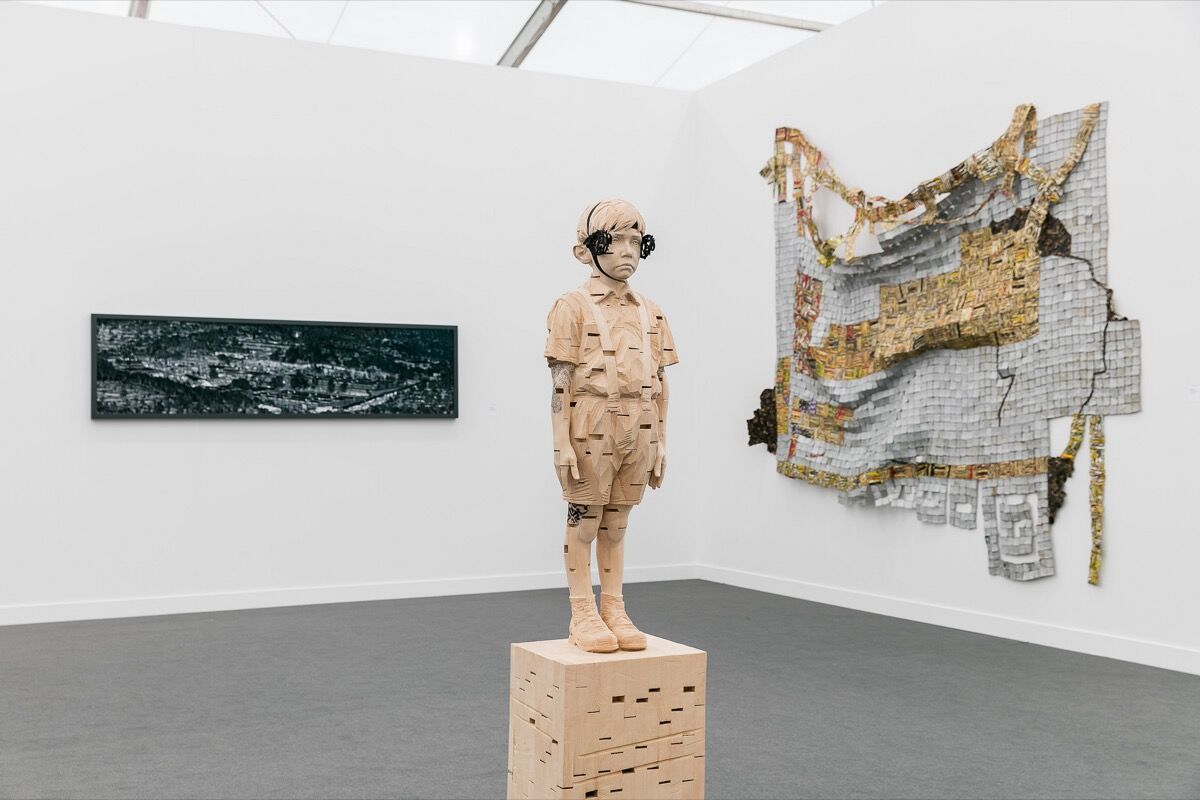 Frieze New York’s Spotlight section, which focuses on 20th-century art, was newly expanded this year to 31 booths from last year’s 16. The new booths, including Michael Rosenfeld Gallery and Fleisher/Ollman, took over space left from a decline in the number of emerging galleries showing at the fair. This year, 45 galleries show in the Frame and Focus sections, down from 51 in 2016.
Bryan Davidson Blue of Chelsea’s Garth Greenan Gallery was participating in Spotlight for the third year, with a selection of paintings and drawings by
Paul Feeley
. He said the small, focused format at Frieze was ideal for presenting a mini-exhibition, when, for example, the limited number of works available by an artist prohibit a full gallery show. Alpharatz (1964) sold to a private collection for $400,000.
At another Spotlight booth, eight drawings by
Irma Blank
had sold for between $18,500 and $30,000, said Chiara Tiberio of P420 in Bologna, Italy. She said many of the people interested in the 82-year-old German artist, who is showing at the Venice Biennial, asked if she was an emerging artist, “because the work is very fresh,” she said.
Whether the number of curators or European collectors in attendance at Frieze New York this year was adequate depended on who you asked. One prominent dealer said museums and institutions were notably absent, others insisted their Europeans—especially the British, if that still counts as European—were in full force. The result was a bit like a safari: If you happen to miss certain animals, it’s a letdown. If you spot them all, it was a great trip.
For dealers and other professionals servicing U.S. collectors, who turned out reliably, Frieze New York was a success. This was especially the case due to it being coupled with the first spring edition of TEFAF New York.
“I think it’s the biggest draw on the calendar,” said Evan Beard, who heads U.S. Trust/Bank of America Private Wealth Management’s art services practice, of Frieze Week. 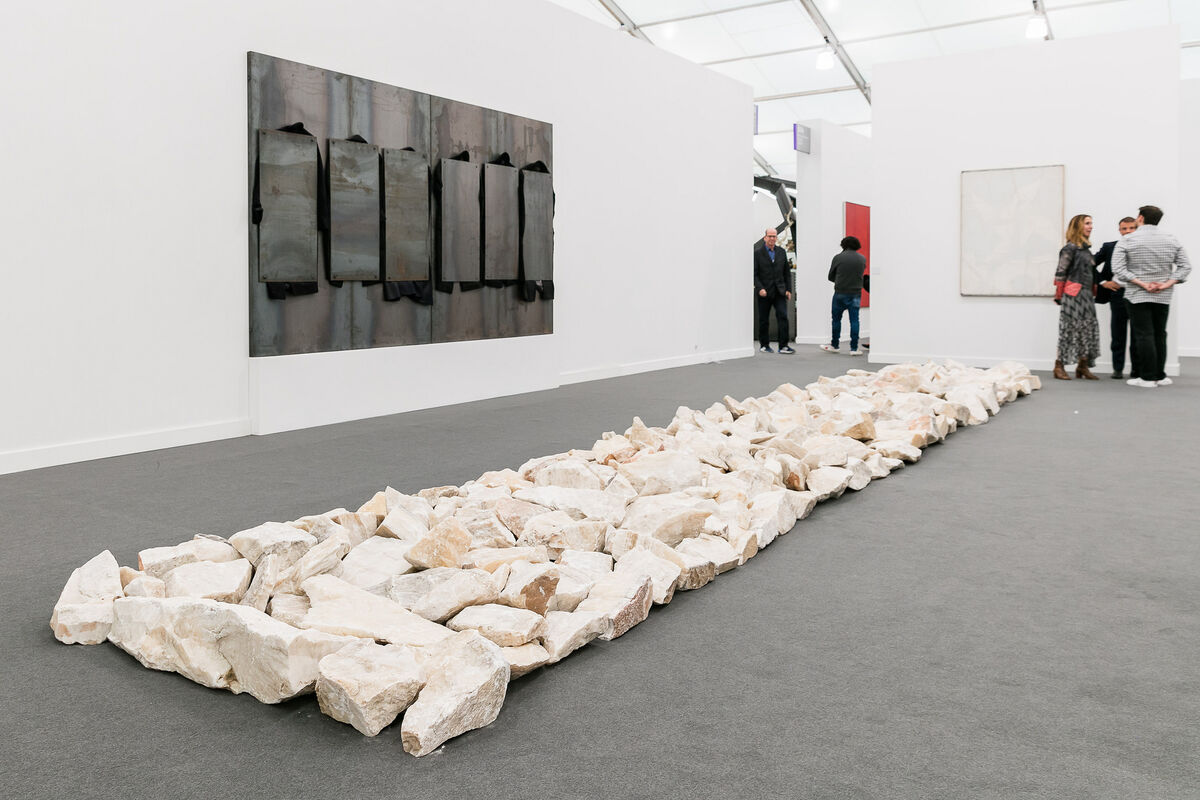 “We have collectors from all parts of the country that come in for this week and both [fairs] are a major draw. A subsegment of that class will then zip off to Venice, and then Documenta,” Beard said, but he noted that the European events targeted a more curatorial crowd, while the New York fairs are geared toward acquisition-minded collectors.
Beard and his colleagues hosted a number of their collectors at TEFAF on Wednesday night, and he said the healthy sales meant great collateral business for those who service the art trade, such as logistics firms, insurers and financial institutions like his.
Nicolò Cardi of London and Milan’s Cardi Gallery was also a fan of New York’s newest double-billing, which places the week in a more established than emerging art conversation. He sold multiple works by
Mimmo Paladino
at TEFAF and a work by
Giuseppe Penone
, Palpebra (1990), at Frieze. Prices for the works ranged from $200,000 to $600,000.
“I think it’s a good combination, for the city, for the art world,” said Cardi, who is alternating days between the two fairs. “It brings a lot of attention, good vibes, positivity, and sales as well.” 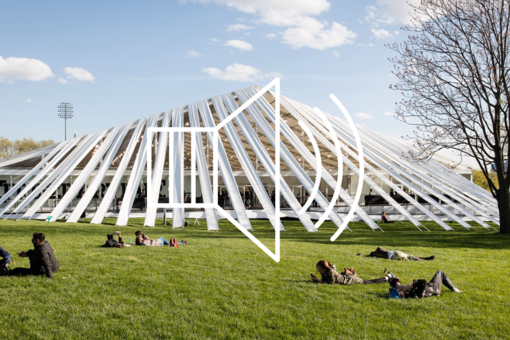 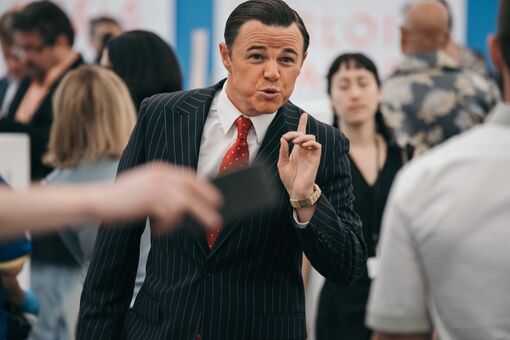 The Very Best of Frieze New York
Artsy Editors
May 4, 2017 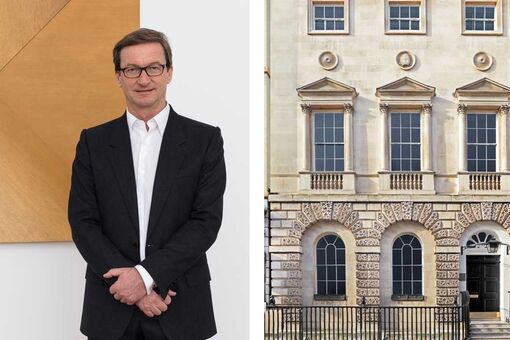