Charlotte Jansen
May 26, 2016 3:33pm
In 1975,
Carolee Schneemann
stood naked on a table, caked in dark paint, and slowly unfurled a scroll from her vagina. Schneemann later wrote of the performance, titled Interior Scroll, which first took place in East Hampton, New York, “it was essential to demonstrate this lived action about ‘vulvic space’ against the abstraction of the female body and its loss of meaning.”
The work is a key reference in a new exhibition by
Sophia Wallace
, the New York-based conceptual artist known for her ongoing project Cliteracy: 100 Natural Laws. Wallace has dedicated the last four years to researching and raising awareness about the clitoris in her work that aims to dismantle taboos around female and feminized genitalia in the heteropatriarchy. The exhibition—on view at Catinca Tabacaru Gallery in New York’s Lower East Side—also references works by
Tracey Emin
,
Bruce Nauman
, and
Glenn Ligon
, as well as the ambience of conceptual light artists
James Turrell
and
Dan Flavin
. Other inspirations span hip-hop lyrics and an ancient Gnostic manuscript on the divine feminine. 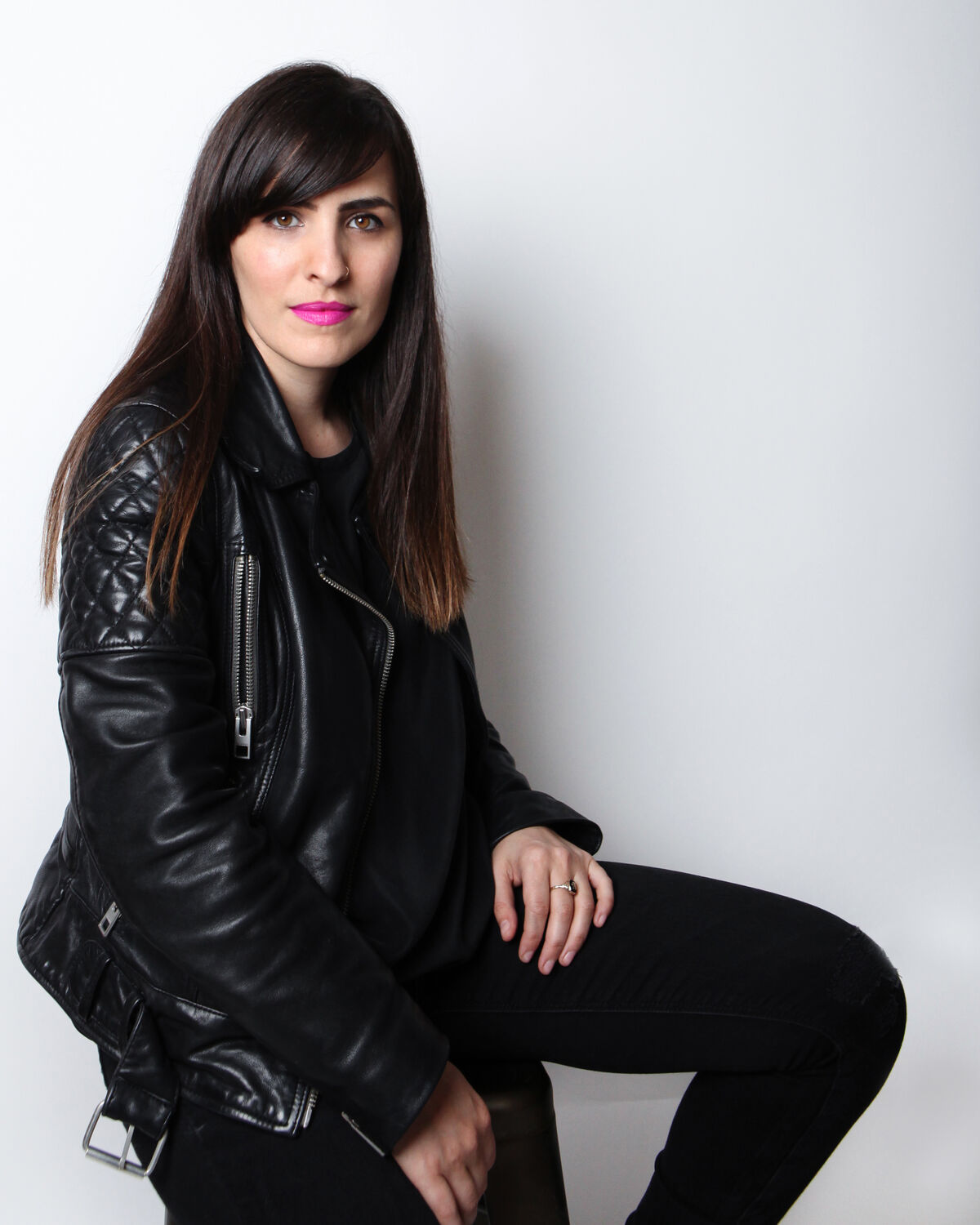 Wallace (like Schneemann) has quickly been categorized as a “radical feminist” artist. In the “evil ’80s” (as author of The Beauty Myth, Naomi Wolf puts it), sweeping conservatism in the west vied with feminism: It became a derogatory term, referred to as the “f-word.” It’s a stigma that female artists are working against—and perhaps an explanation for the rise of “palatable,” fashionable feminism.
Dominant tendencies of self-objectification in new feminist art practices could be seen as only being acceptable because they continue to appease the heterosexual male gaze. “Is it really a surprise that the majority of the hailed ‘feminist art’ of our moment still fits its primary requirement to offer young white sexy objects of heterosexual desire?” Wallace asks me during a phone interview. “As long as it fulfills this demand, the art market can stomach some ‘feminist art,’ but that has nothing to do with feminism, which is an actual political movement that is still life or death.” But she concedes that intervening is not easy when feminist art is so often consumed by the exact hetereopatriarchal systems it criticizes—be it the media, the art world, or the government. 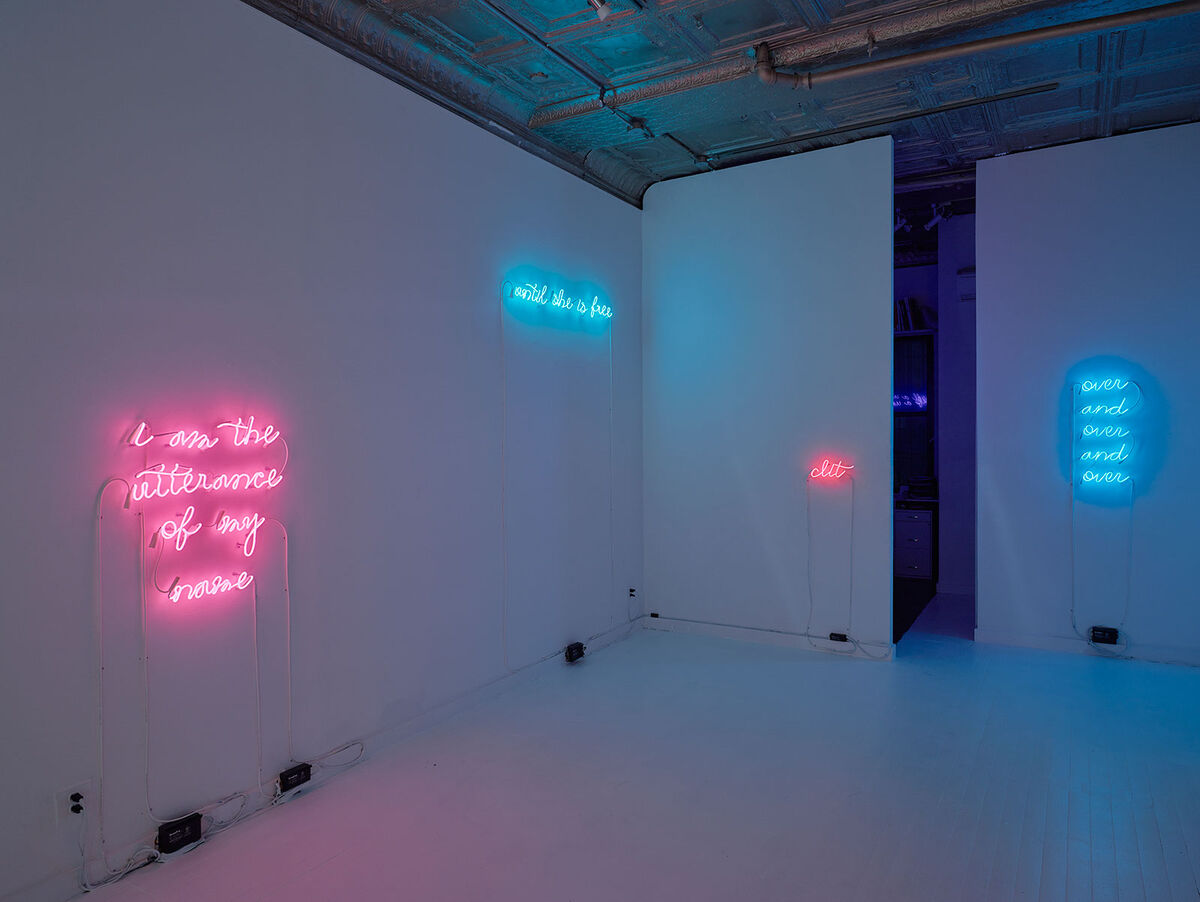 Installation view of “Over and Over and Over.” Photo courtesy of Catinca Tabacaru Gallery.

Advertisement
In her early practice as a photographer Wallace documented friends and acquaintances from her trans and lesbian community. “I was always interested in power, and the way photographs tell a story and naturalize a narrative—who is beautiful, monstrous, unworthy, who gets to be shown in their daily life and who is only shown in crisis—and I’m interested in the way images participate in upholding inequality, and can also disrupt it.” Yet when Wallace sought to publish her portraits at leading media publications, she was appalled when photo editors asked her to show more violence and nudity, rather than reality. In order to gain visibility for her community in the mainstream media, Wallace developed a Trojan horse—she shot her subjects again using tropes from mainstream fashion photography.
Wallace found that the most effective way to talk about topics relating to female bodies was to not use bodies at all—to create conceptual art. “We’re so used to seeing the exposed female body, it’s everywhere. I think very little can be learned from looking at it. I wanted to address the unseen of this body,” the artist says.
Rather than objectifying the subjective experience of seeing the female, Wallace is interested in the non-literal, similar to the way Schneemann was looking for ways to explore the vagina conceptually and symbolically. Wallace sees it “as a sculptural form, an architectural referent, the sources of sacred knowledge, ecstasy, birth passage, transformation.” She looks for new ways to talk about and think of the clitoris—to create new symbols and give rise to new meanings. “My primary concerns in this show were to aestheticize a vision of a liberation for the body othered by gender and sex,” she explains. “The work counters the two tropes of representation for women—beautiful object of desire or reproductive and relational (mother, wife, daughter, grandmother).” Works such as Until She Is Free (2016), inspired by a quote from the author and activist bell hooks, and Herself A Universe (2016), directly address the lack of representations of female-gendered bodies as powerful and autonomous. Wallace uses text as a a declarative gesture, a direct way to counter the unspoken nature of her subject.

Left: Sophia Wallace, Lit Clit (2016); Right: Installation view of “Over and Over and Over.” Photos courtesy of Catinca Tabacaru Gallery.

“Dick art is everywhere,” the artist remarks over the phone. In her view, the deliberate omission of the clitoris from education, science, and culture deposes women of their citizenship. “I took on this project not because I wanted to, but because the treatment of female sexual anatomy is so scientifically baseless, so terribly cruel, so utterly unjust. And yet, the taboos towards female sexuality are so pervasive, this paradigm is rarely questioned,” she explains. “I wanted to call out this lie. As a lesbian I’m already outside the norm, my sexuality is condemned—so I have nothing to lose, I can tell the truth.”
The taboos perpetuate, according to Wallace, because even the word clitoris is unacceptable in society. She recalls the Michigan teacher who was recently fired for saying the word “vagina” in class.
During the course of our conversation, I’m overwhelmed by reams of new information about the clitoris that Wallace shares: All female mammals have a clitoris; the female spotted hyena gives birth through her clitoris, which extends out of her body (it can be up to seven inches in length); the human clitoris has over 8,000 nerve-endings (the penis has 4,000) and its own direct blood supply (the penis doesn’t).
Yet returning to Wallace’s neon text sculptures, emanating a lovely hypnotic glow, it’s hard to see the radicalism of her ideas. Her neon pieces are very much in the vocabulary of contemporary art—and as such, seem to appeal to a consumer mentality. “When I started with Cliteracy, I intentionally worked large-scale, minimalist, with text—usually gold on white. Many people were drawn in by this aesthetic, who wouldn’t expect to be interested in the content.” It proved an effective way of getting people to engage with her content in a non-aggressive way. “I don’t think such diverse viewers would have given it a chance if I was making small, soft objects you could hold in your hands in pink and purple; or a red-and-black DIY activist aesthetic.” 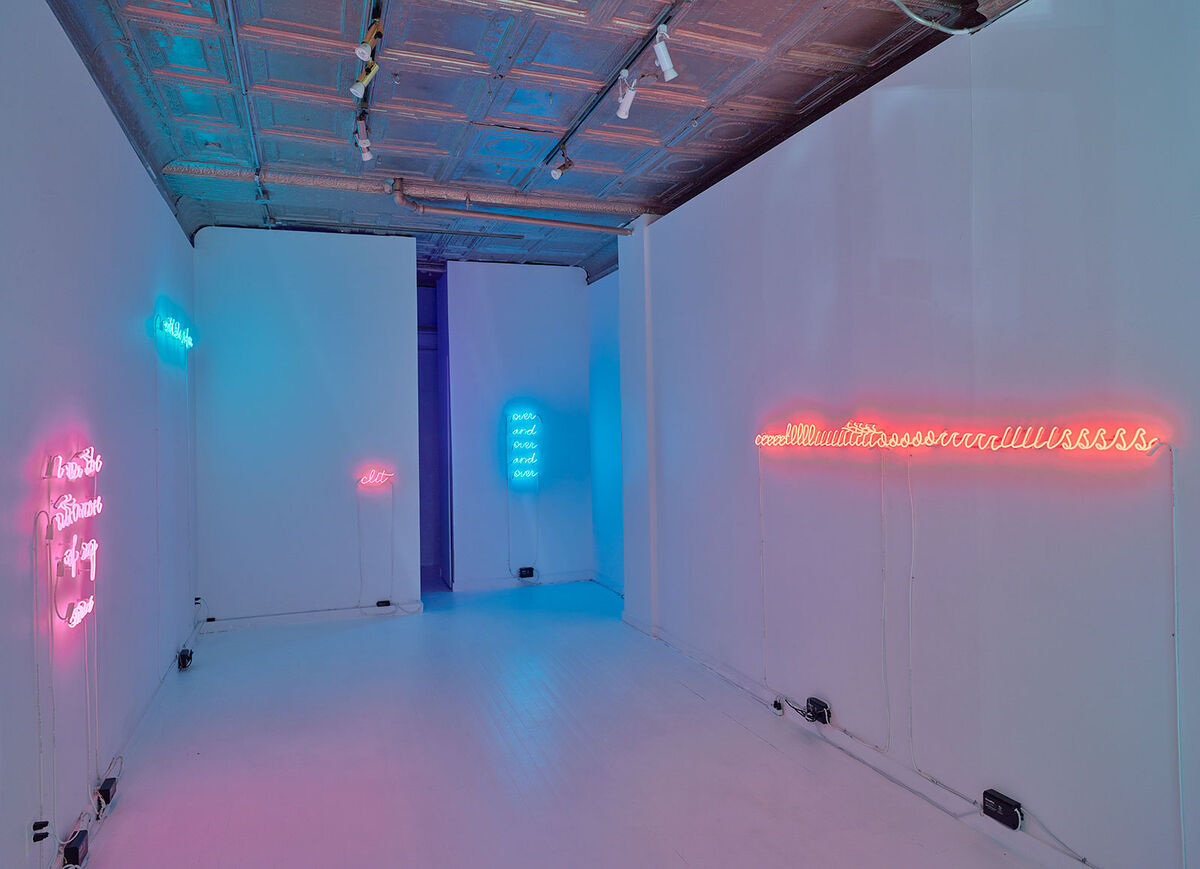 Installation view of “Over and Over and Over.” Photos courtesy of Catinca Tabacaru Gallery.

Wallace’s approach also gets her artwork out there in spite of censorship, something the artist experienced just this month. She posted reviews of a current group exhibition she’s included in on the female nude, “In the Raw” at The Untitled Space, that were removed from Facebook. Her website has also been flagged as obscene and soliciting for prostitution. Similar stories are now regularly reported around the world: In Japan (where there is an annual festival of the penis) last month, an artist was convicted for 3D-printing a vagina. This week, Facebook banned a photo posted by an Australian Feminist group to promote a body positivity event, because the woman who appeared in the picture was deemed to “violate its health and fitness policy.”
It’s clear that in 2016, not enough progress has been made. The media continue to police and control women’s bodies—a pattern that has repeated itself on online platforms. Meanwhile, violence against women remains widespread and at a peak—at a point when, for the first time in history, there are more men than women on the planet. Female genital mutilation is another salient issue on Wallace’s mind. In 2016, according to a recent report published by UNICEF, 200 million women have undergone the procedures in 30 countries.
“Female bodies are still in the process of colonization. The very knowledge we have about our bodies is far from neutral,” Wallace emphasizes. “I make work from this reality and I use the privilege I have as an American artist in New York City to stand up for the body othered by sex and gender—something impossible in most of the world.”

Art initiatives like Wallace’s and another pro-women initiatives—such as
Tatyana Fazlalizadeh
’s Stop Telling Women to Smile—can be transformative and can endure culturally far longer than initiaves led by politicians. Wallace’s exhibition’s title, “Over and Over and Over,” serves in part as a reminder of that. “This doesn’t stop until we are free, and until we achieve that freedom; until the clit exists in speech and representation, until it is respected, and until the people who possess this organ are respected. Until then, like anything in life, we have to keep going, keep repeating it, like a mantra. Over and over and over.”
Wallace’s art is part of a clarion cry, a powerful collective feminine energy. “I am hopeful,” she tells me. “If you have the will to engage for a better world, history shows that things can change.”
Charlotte Jansen
“Over and Over and Over” is on view at Catinca Tabacaru Gallery, New York, May 20–June 25, 2016.
Related Stories