01  Three Sotheby’s auctions held during Asia Week in New York have exceeded estimates and boasted high sell-through rates, indicating that demand from China may be on the rise once again.

(via Sotheby’s)
So far, sales for Sotheby’s Asia Week have totalled roughly $60 million—more than $20 million over the high estimate, with a Saturday auction still to come. Runaway lots included a turquoise-ground famille-rose “Hui Mountain Retreat” teapot, which sold for six times its high estimate at nearly $3.5 million. Early Chinese works from the collection of significant Japanese dealer Sakamoto Gorō saw a 100% sell-through rate at the single-owner sale. These strong auction results may indicate that interest in Chinese artworks at Western sales is picking up. Chinese buyers were once eager to snap up traditional bronzes, porcelains or scrolls at auctions in London and New York, which drove up prices beginning in 2010. However, in recent years that fervor had cooled as the market for Chinese artworks relocated to Hong Kong. The sales bolster recent data showing surprising growth in the country’s art market, with these auctions providing further evidence that currency flight from China’s mainland is incentivising buyers to store their wealth in more secure assets—art among them.

02  Getty Images, currently embroiled in a $1.1 billion lawsuit, argued in court papers this week that the company has the right to charge for works even if they are in the public domain.

(via the L.A. Times)
Filed by photographer
Carol Highsmith
, the suit charges that Getty and photo company Alamy were claiming to be the copyright holders of Highsmith’s images and charging fees for the use of the works. Her photographs have been in the public domain since she donated some 18,755 of them to the Library of Congress. In response, Getty asked for the case to be dismissed, claiming that since the works entered the public domain, Highsmith “cannot complain when members of the public, including businesses, make use of the photos for commercial purposes.” Further, they added, it is “impossible to infringe a copyright in those works, as no copyright exists.” Damages from a copyright violation in a case such as this are normally capped at $25,000 per instance (of which there are 18,755). However, since Getty violated the same statute with another photographer’s work within the last three years, Highsmith can seek three times that amount. In court filings, Alamy called the number “absurd.”

03  Paris’s FIAC will host over 40 new galleries for its 43rd edition, bringing this year’s exhibitor list to 186, up from last year’s 170 participants.

(via artnet News)
Blum & Poe, London’s Richard Saltoun, and the young Kolkata gallery Experimenter are among the fair’s new additions. This year’s edition will also feature a new venue, the Petit Palais, and new sections, such as the performance festival Parades. It comes amidst the cancellation of the fair’s two-year-old satellite Officielle, which was intended as a platform for young galleries but also ostracized some key emerging players, in part leading to the creation of the competing Paris Internationale last year. FIAC also takes place with a nearly two-week gap between it and Frieze London, whereas the fairs have traditionally abutted one another for a great art-world migration each October via Eurostar. Perhaps due to this, some major galleries that have previously exhibited at both have this year opted to only show in London, among them Tanya Bonakdar, Matthew Marks, Andrew Kreps, and Greene Naftali, Franco Noero, The Third Line, and Office Baroque.

04  MCH Group has taken a co-ownership stake in India Art Fair as part of a previously announced set of planned acquisitions and joint ventures between the Swiss live marketing conglomerate and regional art fairs.

(via MCH Group)
In March, MCH Group announced its intention to expand its portfolio of around 40 conventions and other live marketing events—which includes the trio of Art Basel fairs, Design Miami/, and Baselworld—by taking a stake in existing regional art fairs or creating new fairs. MCH Group now owns a majority 60.3% stake of India Art Fair. Previous owner Angus Montgomery Ltd. holds 29.7% of the fair, and the founding director and partner of the fair, Neha Kirpal, retains 10%. Sandy Angus, chairman of Angus Montgomery, said he’d seen notable growth in visitor numbers at the New Dehli event since 2011, labelling India Art Fair as “the most significant art fair in the region.” Angus Montgomery and SME London were both announced by MCH group as among the initial set of companies with whom they intend to collaborate when the initiative was launched in March. However, Angus’s other fair, ArtInternational, was canceled this year due to unrest in Istanbul, its home city, and SME London’s Art16 announced just this week that it will not take place next year.

05  A $150 million M. C. Escher-like staircase will be the centerpiece of a new five-acre plaza at the Hudson Yards development on Manhattan’s West Side.

(via the New York Times)
After being kept a secret under lock and key, plans for Vessel, a 15 storey-tall honeycomb structure by British designer
Thomas Heatherwick
, were unveiled on Wednesday at Hudson Yards to a crowd of hundreds, including Mayor Bill de Blasio. When it opens in 2018, the giant bronzed steel and concrete staircase—or “jungle gym,” as it has been characterized—will feature 2,500 climbable steps on 154 interconnected staircases. Visitors will be able to catch a glimpse of the New York skyline from 80 viewing platforms. “Vessel” will join the High Line as yet another major public attraction along the Hudson River. And though, like the High Line, this new interactive installation will give New Yorkers an elevated view of the city, with a base only 50 feet in diameter, ballooning to 150 feet at the top, “Vessel”  will also allow for plenty of open space in the plaza despite its colossal scale. Billionaire Stephen M. Ross of Hudson Yards’s developer Related Companies was instantly impressed by Heatherwick’s 2013 proposal for “Vessel.” “I looked at it and said, ‘That’s it.’ It had everything I wanted,” Ross said.

(via artnet News)
The announcement, first made to exhibitors in late August and now available on Art16’s website, states that the fair is partnering with galleries and collectors “to develop a much enhanced fair going forward.” The managing director of Art Fairs London Ltd., the group that organizes Art16, has indicated that the fair will return in 2018. However, they intend to schedule the event earlier in the year to avoid May competition, which is thought to be one of the reasons for its weak performance. Other reasons for the hiatus may include the fair’s irregular branding—the name changes annually to reflect the year—and its hefty list of exhibitors, which had already been reduced from 180 galleries in 2014 to 100 in 2016. The size of the fair proves especially difficult given that its participants, culled from around the globe, tend to be lesser-known than those of its competitors.

07  A respected scholar has endorsed a plaster cast of Little Dancer as an Edgar Degas original, the latest development in a long-running debate over the controversial work.

(via the New York Times)
Experts have long been torn as to whether or not the plaster, found in a now-defunct foundry outside of Paris in 2004, was made during the artist’s lifetime. Although he argued for many years that the plaster could not have been crafted by
Degas
or his studio prior to the artist’s death in 1917, Arthur Beale—the former chairman of the department of conservation and collections management at the Museum of Fine Arts, Boston—has now reversed his position. “I think those that have scoffed at it as being a fake or a copy or something, should take a second look,” Beale said last Friday, citing art-historical and scientific evidence. Beale’s endorsement supports a theory proposed by fellow art historian Gregory Hedberg, which asserts that the plaster is an “earlier conception” of Degas’s 1881 bronze sculpture Petite Danseuse de Quatorze Ans.

08  According to experts who gathered in Amsterdam this week, Vincent van Gogh dealt with some type of psychosis at the end of his life—although the group could not agree upon the the root cause of his illness.

(via the New York Times)
The meeting was organized by the Van Gogh Museum, in concert with its current exhibition “On the Verge of Insanity,” which explores the final 18 months of the Dutch artist’s notoriously troubled life. Thirty-five people attended the discussion, including doctors, psychiatrists, and art historians, who each offered evidence pertaining to
van Gogh
’s condition. Van Gogh’s mental illness has fascinated countless researchers since his death by apparent suicide in 1890—over the years, it has been suggested that he may have been afflicted with syphilis, bipolar disorder, temporal lobe epilepsy, or schizophrenia. Although the attendees of this most recent symposium agreed that the artist suffered from psychotic episodes, in the end they could not determine what caused them. Art history professor Louis van Tilborgh was one of the participants: “It’s difficult to make a diagnosis, so the real progress we’ve made is that specialists in the field are talking about it, and they’ve never done this before,” he said.

(via Bloomberg)
According to a representative, the collection includes some 400 works by avant-garde Italians such as
Alighiero Boetti
,
Jannis Kounellis
, and
Giuseppe Penone
—major
Arte Povera
artists who have recently been spotlighted in solo shows. The conceptual art movement, named (it translates to “poor art”) for its use of simple materials like wood and dirt, emerged in Italy in the mid-’60s. It has also seen soaring prices; all three artists met record prices in auctions held in the past two years. The new 20,000-square-foot exhibition space will be free and open to the public, although for the time being by appointment only.

10  Pedro Reyes has been named the inaugural Dasha Zhukova Distinguished Visiting Artist at MIT’s Center for Art, Science, and Technology.

(via the Massachusetts Institute of Technology and Artforum)
Established last fall with a $1 million donation from philanthropist and collector Dasha Zhukova, the residency will encourage artists across disciplines to engage with MIT’s innovative and technologically advanced community to pursue new research and artistic practices. As the first artist to be appointed by the program, Mexican multimedia artist-activist
Pedro Reyes
—celebrated for his socially and politically engaged participatory projects—will begin his residency this fall by co-teaching a course on technology, security, and humanization called “The Reverse Engineering of Warfare: Challenging Techno-optimism and Reimagining the Defense Sector (An Opera for the End of Times).” “My personal experience and perspective from Latin America, where human interaction matters more than technology, have made me particularly interested in challenging techno-optimism at MIT,” said Reyes. “Institutions around the world always pay attention to what happens at MIT, and I have witnessed many ideas that have emerged there that are being implemented in Latin America.”
Artsy Editors
Cover image: Courtesy of Sotheby’s.
Related Stories 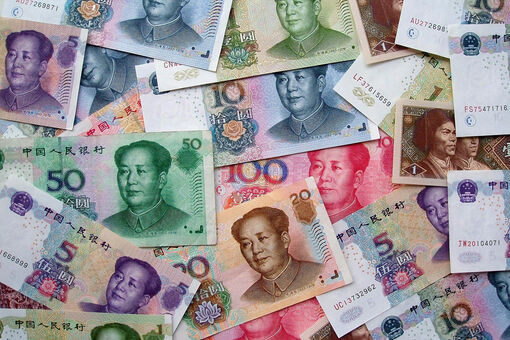 China Knocked the U.S. Off the Top of the Art Auction Market—Here’s How
Isaac Kaplan
Aug 17, 2016 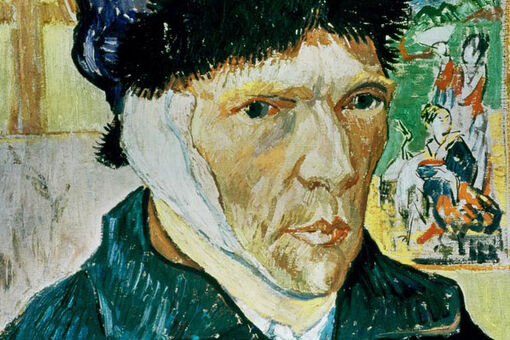 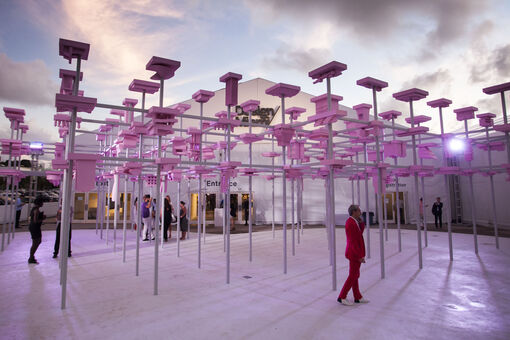 Art Basel Owner Plans to Buy Up Regional Art Fairs—Here’s Why It Could Be Good for Galleries
Alexander Forbes
Mar 7, 2016