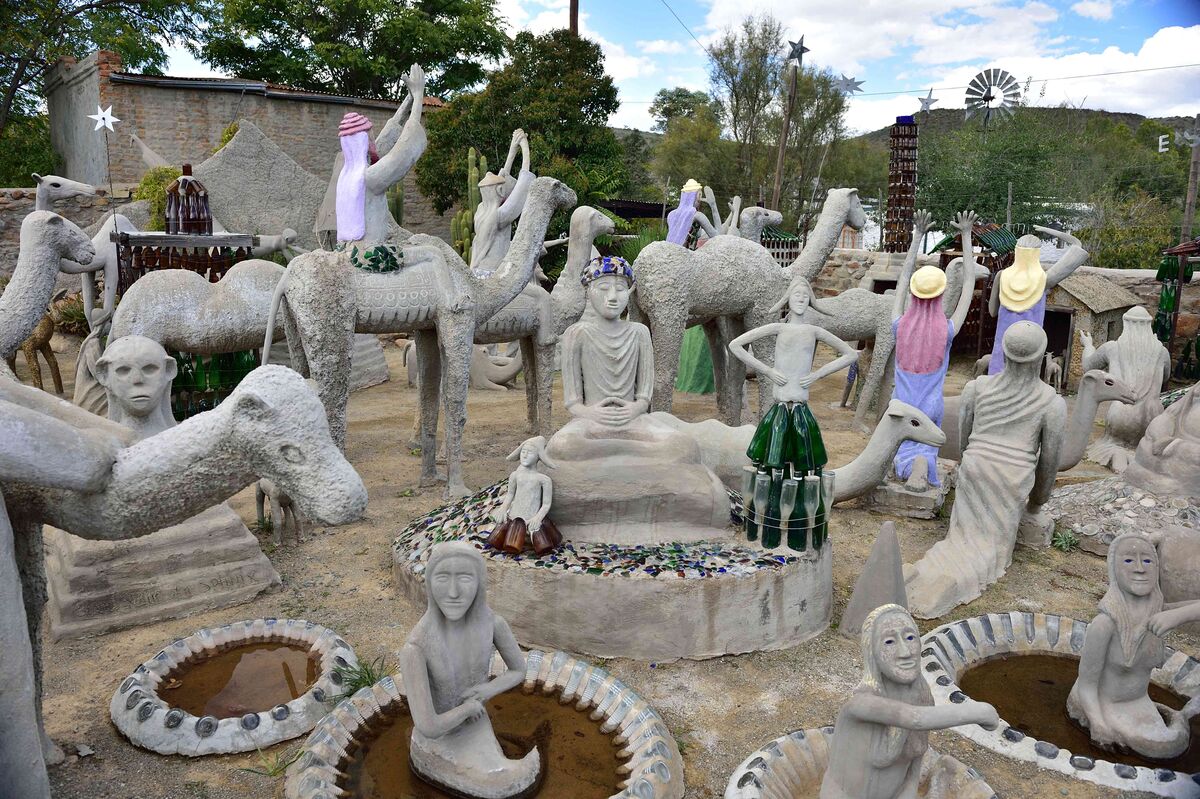 In the remote South African town of Nieu-Bethesda, a mystical garden rises from a dusty, mostly deserted road. There, a jubilant procession of human-scale sculptures—of euphoric mermaids, giant birds, towering giraffes, and ecstatic prophets—meanders across a small plot of land. The figures appear raising their hands and wings amongst a sea of Queen of the Night cacti, which occasionally burst into white flowers.
But this Eden is populated with more insidious characters, too: men resembling hungry animals, owls with penetrating blue eyes. Above the strange, spellbinding parade, a hand-hewn sign reads: “This Is My World.”
The sign, and the sculpture garden that spreads beneath it, is the work of Helen Martins, who spent the last 31 years of her life transforming her home into a sanctuary of color, light, and fantastical creatures. Here, the dark thoughts that plagued her were soothed. Occasionally, however, they emerged in her work, endowing the Owl House—as she named her hideaway—with an eerie aura of disquiet. 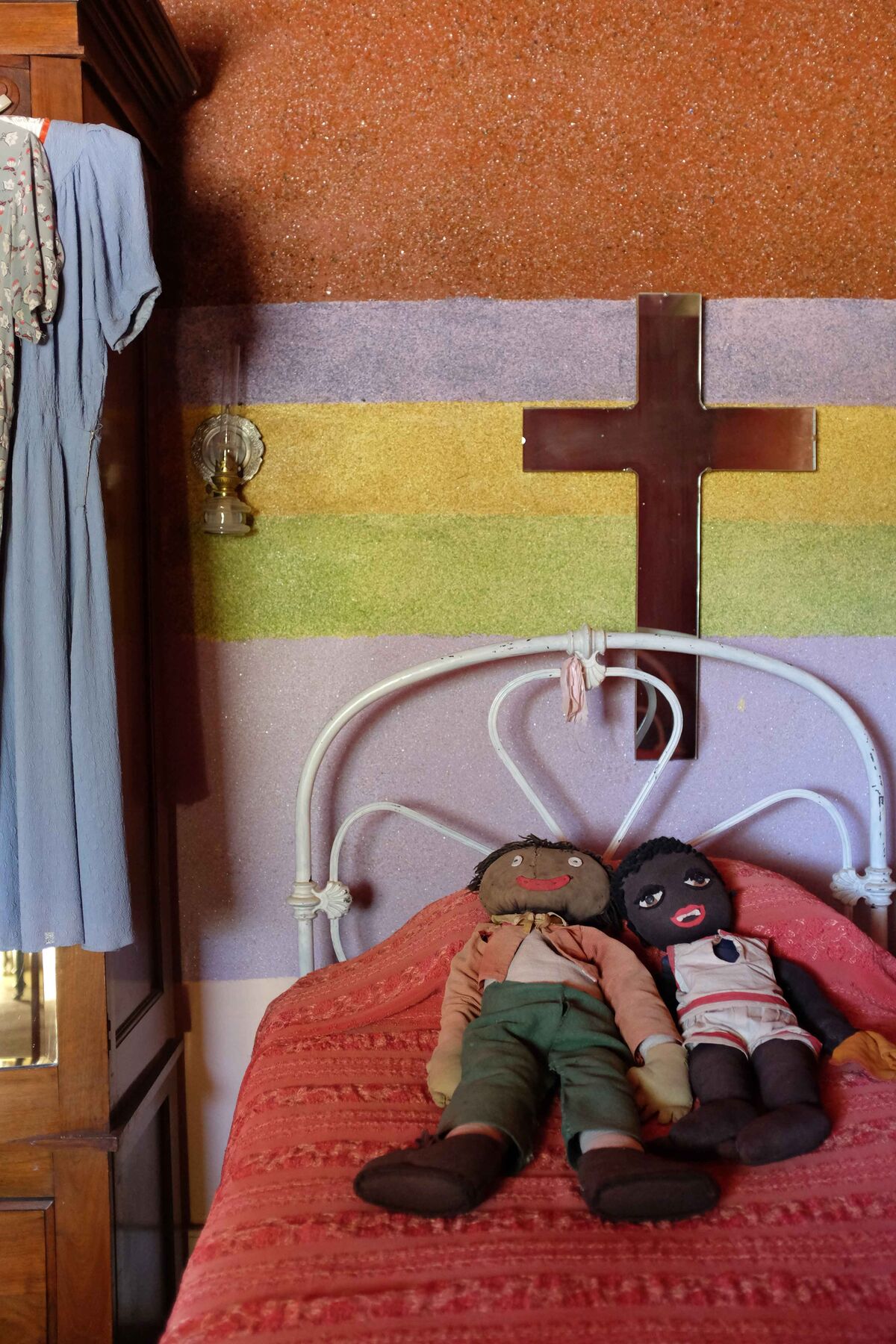 Interior view of the Owl House, 2015. Photo by David Sorich, via Flickr. Interior view of the Owl House, 2015. Photo by David Sorich, via Flickr.

Martins was born in 1897 in Apartheid-era South Africa, the youngest of six children. Her family was financially comfortable, and Martins went on to study to become a teacher and marry Johannes Pienaar, an educator and dramatist. Together, they traveled the country as Pienaar produced plays along the way. Due to Pienaar’s infidelity, however, the marriage didn’t last. There were also rumors that he forced Martins to abort two pregnancies, as Rosa Lyster recently wrote in The New Yorker.
By 1928, at the age of 30, Martins had divorced her husband and returned to her hometown of Nieu-Bethesda. It was there, back in her childhood home, that she began her life’s work.
By necessity, most cottages in Martins’s hometown were kept dark; small windows shielded inhabitants from the intense heat of summer, and from winter’s icier winds. But after the subsequent deaths of her mother and father, in 1941 and 1945, respectively, Martins craved a brighter environment. She envisioned a home where color filtered in, reflecting off of jewel-like interiors. 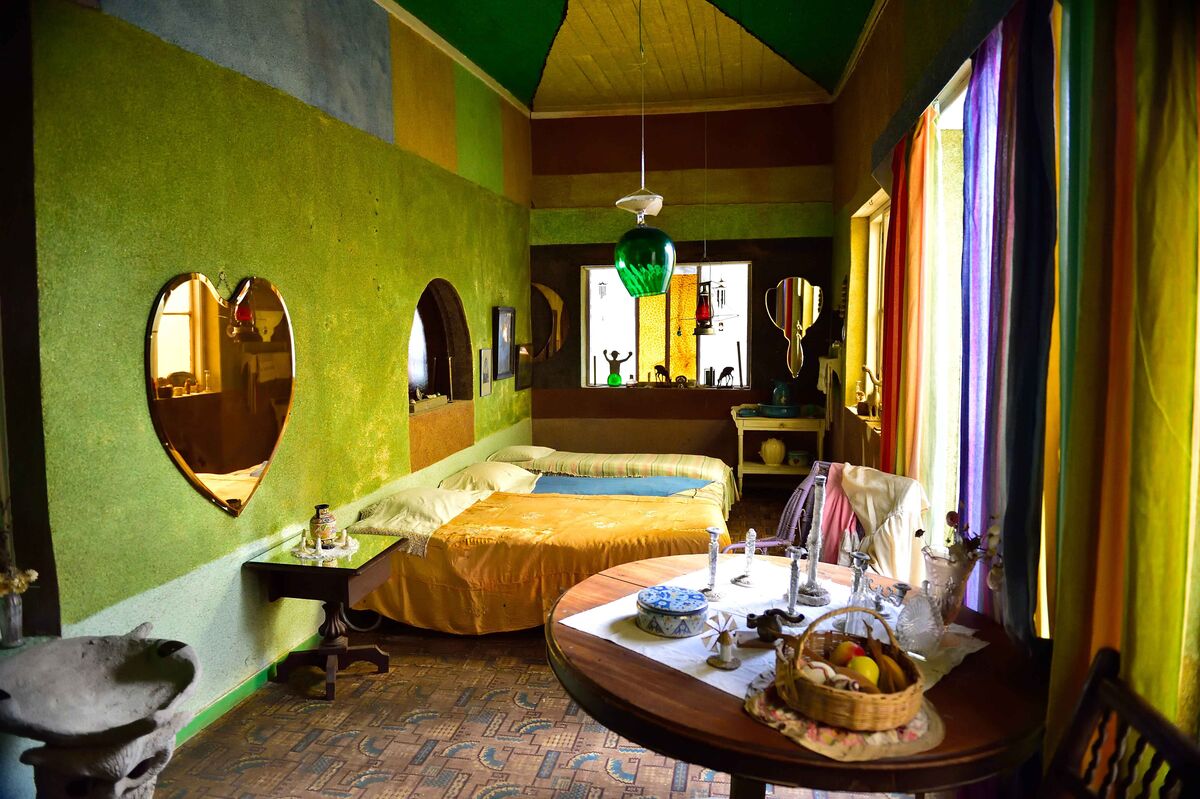 Advertisement
Before long, she’d hired workers off of local sheep farms to remove walls and fill the gaps with colored cathedral glass. Martins also added mirrors shaped like moons and hearts to the home’s spare decor and began crushing glass in a coffee grinder, applying the shimmering shards to walls and ceilings. Martins’s rooms became giant kaleidoscopes of color; even at night, her home shone thanks to the candles she kept burning.
Martins had never trained in art, and it remains a mystery what, precisely, compelled her to begin transforming her once nondescript home. The website for the museum that now maintains Martins’s Owl House cites boredom as her impetus: “Driven to despair by the dullness of her daily life, she took steps to transform her world with light, colour and texture.” Others have suggested more sinister motives for why Martins reinvented the house as her own. While she had a loving relationship with her mother, her rapport with her father was more tenuous, colored by unconfirmed rumors of incest. Whether true or not, in the last several years of his life, Martins banished her father to a room outside of the home, which she painted completely black. In a final, telling gesture, she carved the words “The Lion’s Den” into the stairs leading to his door.
Even in Martins’s increasingly light-filled home, there were signs pointing to underlying distress—like tables decorated with menacing snakes and a small monstrous figure in the bathroom, which Martins named “Little Devil.”
8 Images
View Slideshow Martins’s mostly joyful outdoor sculpture garden, which she began after finishing her home’s interior, was also laced with dark details. In an area she not-so-subtly named the Garden of Debauchery, one man disrobes while others look on and morph into animals of the more slovenly variety.
Even so, Martins’s cast of virtuous, majestic creatures is much larger, overwhelming their nefarious neighbors with big smiles and exuberant gestures. An example of strength in numbers, they seem to represent good overpowering evil.
After Martins’s health began to fail in 1976, at the age of 78, she was forced to stop making sculptures, and subsequently ended her own life. “Should the doctor advise that I should leave off working, then I shall die; and directly,” she wrote to a friend shortly before her death, emphasizing the importance of her work to her own survival. To this day, her home stands as powerful gesture of self-actualization: one woman’s attempt to overcome personal trauma—and bring light into her life—through art.
Alexxa Gotthardt
Related Stories