South Korean Government Accused of Blacklisting 9,000 Artists—Here’s What You Need to Know 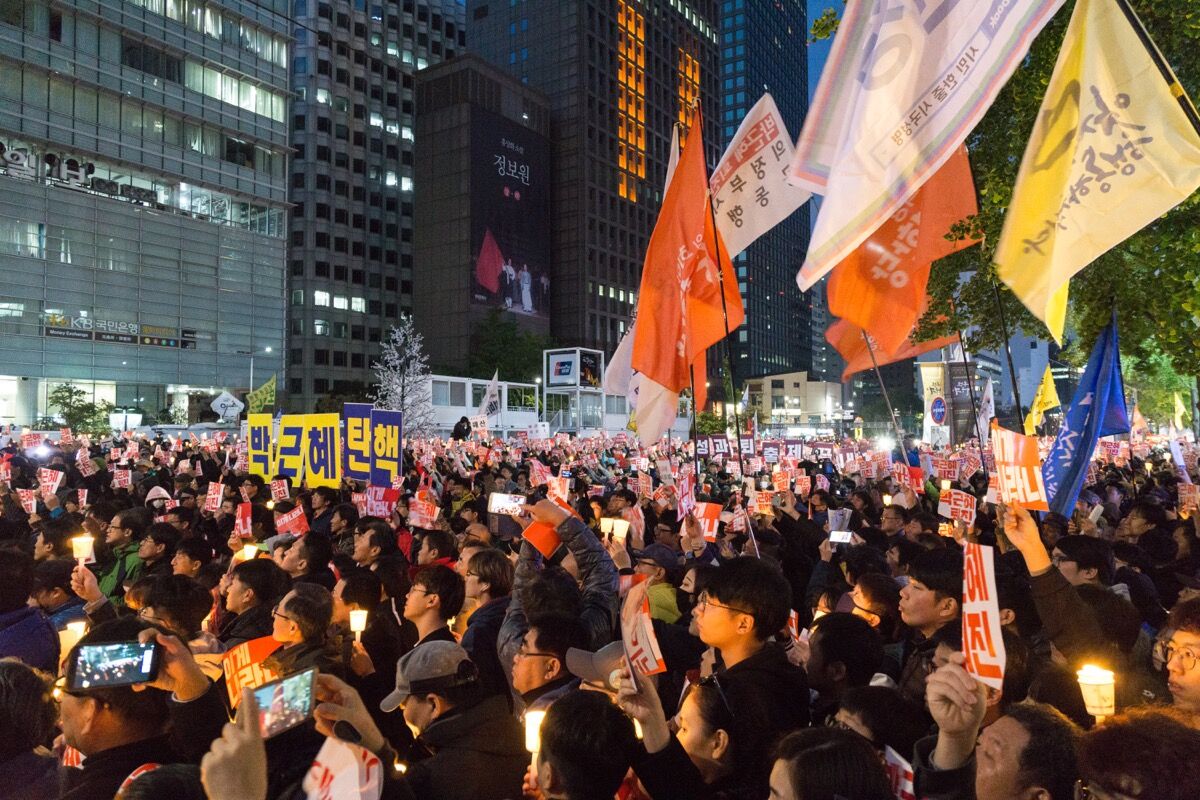 A group of artists is suing the South Korean government for putting them on a blacklist that barred them from receiving state funding or support. The president said that the blacklist doesn’t exist but the culture ministry has already publicly apologized for it. Oh, and the president has been stripped of her powers, after being impeached on charges of corruption and abuse of power. Confused? Here’s what you need to know about the artist blacklist scandal that’s roiling South Korea.

Culture Ministry: “So Much Corruption”

Protests against South Korea’s president Park Geun-hye began last fall after reports emerged that a close friend and advisor of hers had been using her influence to steer donations towards charities she controlled. A government investigation into corruption allegations surfaced a blacklist of 9,473 artists deemed to be ineligible for government support, according to Freemuse, a free-expression advocacy group. Park and her culture minister, Cho Yoon-sun, deny having created it, Reuters reported.
But members of the artistic community had long suspected such a list existed, after a series of censorship episodes over the prior few years. Artists began protesting such a blacklist in mid-October of last year, The Korea Times reported. In their call for another protest in November, a committee of artists groups cited “so much corruption in the Ministry of Culture, Sports and Tourism” in a Facebook post.
The investigation has also produced a diary from one of Park’s senior aides, which described retaliation against the artist Hong Sung-dam, whose paintings depict Park as “a scarecrow manipulated by evil forces, including her dictator father,” the New York Times reported. The diary also describes a 2014 meeting of high-ranking presidential aides in which Park’s chief of staff called for “a combative response to leftists in the cultural and art circles,” and directed those present to “discover their networks.” The Times also reported that “rumors of a blacklist have been circulating for years.”
By December, after weeks of protests, the president was impeached by the country’s parliament. In mid-January, prosecutors arrested the culture minister Cho Yoon-sun, making her the first sitting minister ever to be arrested, according to Reuters.

Ghosts from the Past

Park’s father, the dictator Park Chung-hee, ruled from 1961 to 1979, a period of pronounced censorship, in particular of news media and publishers, says Charlotte Horlyck, a lecturer in Korean art history at the School of Oriental and African Studies. South Koreans, having spent three decades under democratic rule, were dismayed to see such overt censorship reemerge.
“During the years of dictatorship the government imposed heavy-handed sanctions on those that were deemed to be too liberal, too leftist and/or in other ways seen to be critical against the rule,” says Horlyck. “What has shocked the Korean public is that this has seemingly happened again under an apparently democratic government.”
But, she noted, it’s difficult to untangle culture from politics in South Korea. Unlike in, say, the United Kingdom, the directors of many government-funded cultural institutions are appointed by the government, says Horlyck, so the cultural leadership of the National Museum of Korea or the Seoul Museum turns over when there’s a changeover of power at the national or city level, she said.
“There’s a very close intertwinement between art and politics in Korea, and there always has been,” she says. She noted government support for the arts was also “hugely critical,” as it funded not just individual artists but also film festivals, art events such as the Gwangju Biennale, and other cultural infrastructure.
Lisa Collins, a fellow in the office of the Korea chair at the Center for Strategic and International Studies, says it is difficult to know whether other democratically elected governments have made similar attempts to shape public opinion through culture. But it is clear the blacklist has touched a nerve, summoning the ghosts of Korea’s autocratic past at a time of deep and broad anger at Park’s actions.
“The reason it’s made people so angry is because of the history,” she says. “People thought she was reviving those past practices.”

Artists are “Inherently Suspect or Antagonistic”

Freemuse said the blacklist includes artists from across genres, including cinema, fine art, theater, and literature. The Korea Times reported news of the blacklist in English in October, writing:
The blacklist, which the source handed over to the newspaper, includes 594 artists who opposed a government enforcement ordinance about the Sewol ferry disaster, 754 authors who signed their names on a statement calling for the government to take responsibility for the disaster, 6,517 artists who declared their support for then opposition candidate Moon Jae-in during the 2012 presidential election and 1,608 artists who supported Seoul Mayor Park Won-soon during the 2014 mayoral election. Both Moon and Park are leading presidential candidates.
The “massive” size of the list suggests hostility towards the artistic community almost in its entirety, says James Tager, free expression program manager at PEN America, a free-speech advocacy group.
“It’s clear by the size of the list that it’s not meant to target just a few isolated artists,” he says. “The Park administration appears to have viewed the artistic community in general in South Korea as inherently suspect or antagonistic.” He notes, though, that it’s difficult to compare it to any similar blacklists in other countries, since these lists are normally kept secret.
The emergence of the blacklist confirmed what many artists and art administrators already suspected, that their political beliefs had cost them funding or opportunities since Park took power.
“Many artists are now piecing together past events as the blacklist is becoming public,” said Horlyck.

In late January, the culture ministry issued a formal apology and promised to take steps to protect artists’ freedom of expression in the future.
“We feel terrible and ashamed that the Ministry of Culture, Sports and Tourism caused any problems in the fairness of the government’s support of the culture-arts scene over the list of artists excluded from public support. [The ministry] is supposed to defend the freedom and creativity of artistic expression,” said acting culture minister Song Soo-keun, according to the Yonhap news agency.
Tager says the apology was “a good start,” but that the government needs to take concrete actions to assure artists they are not at risk of being targeted going forward. Acting culture minister Song said the ministry will convene a task force, mostly of artists, who will propose measures to protect artistic autonomy and will be charged with monitoring the government for any imposition on artistic freedom. He said the government “will also amend a relevant law to insert a clause to fundamentally prevent unjust treatment of artists based on their artistic expression or political activities,” according to Yonhap.
In early February, a group of 461 artists sued the president, her former chief of staff, and the former culture minister for abuse of power, Reuters reported. Their lawyers said the defendants had violated the artists’ right to free speech and expression, as well as their right to privacy, since the government collected personal information on the artists as it drew up the blacklist. They are each seeking 1 million won, or roughly $869, in damages.
Lisa Collins says the South Korean judiciary is fairly strong and independent, and the government is in no position to lean on the courts.
“I think the public is so angry right now they wouldn’t be able to do that even if they tried,” she says.
Anna Louie Sussman
Related Stories