Karen Kedmey
Sep 16, 2015 5:04pm
For his latest solo show at L.A.’s KP Projects/ MKG, “Trapezoid,”
Mark Whalen
bends space, time, and narrative in new paintings and ceramic works. Within and against richly patterned, calculated backgrounds, small male and female figures appear in semi-ambiguous states of work, play, pleasure, and pain—reflecting the artist’s ongoing interest in what he has described as “life’s puzzling duality.” 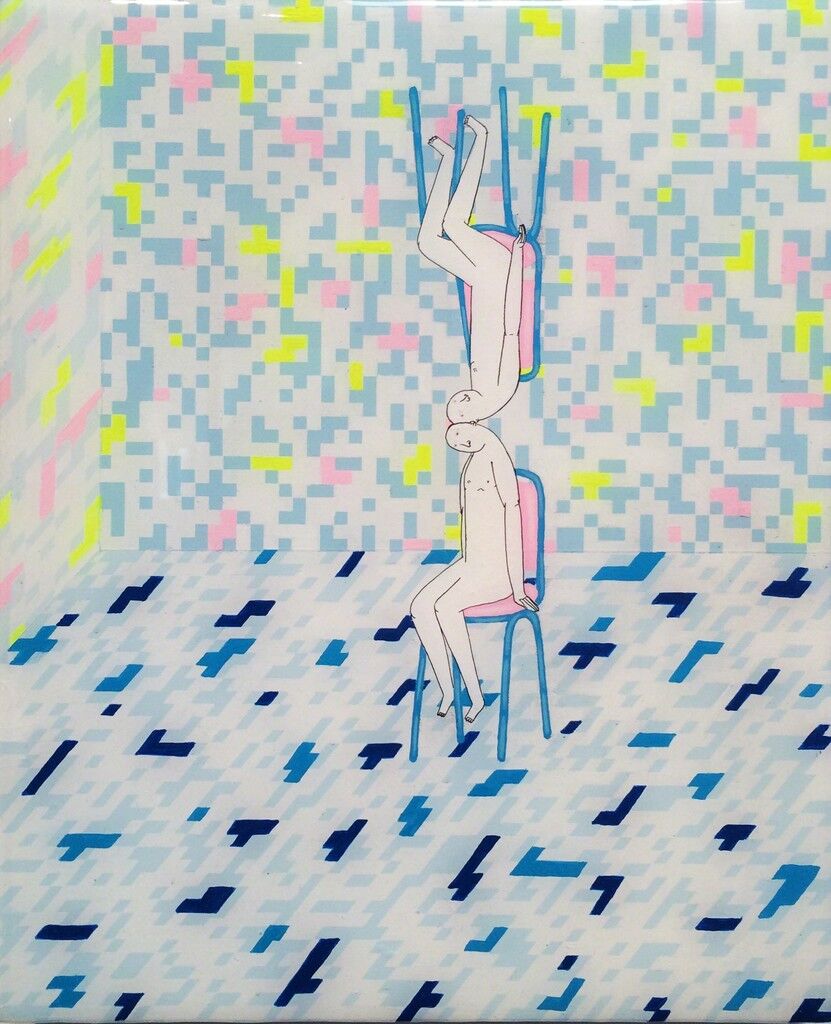 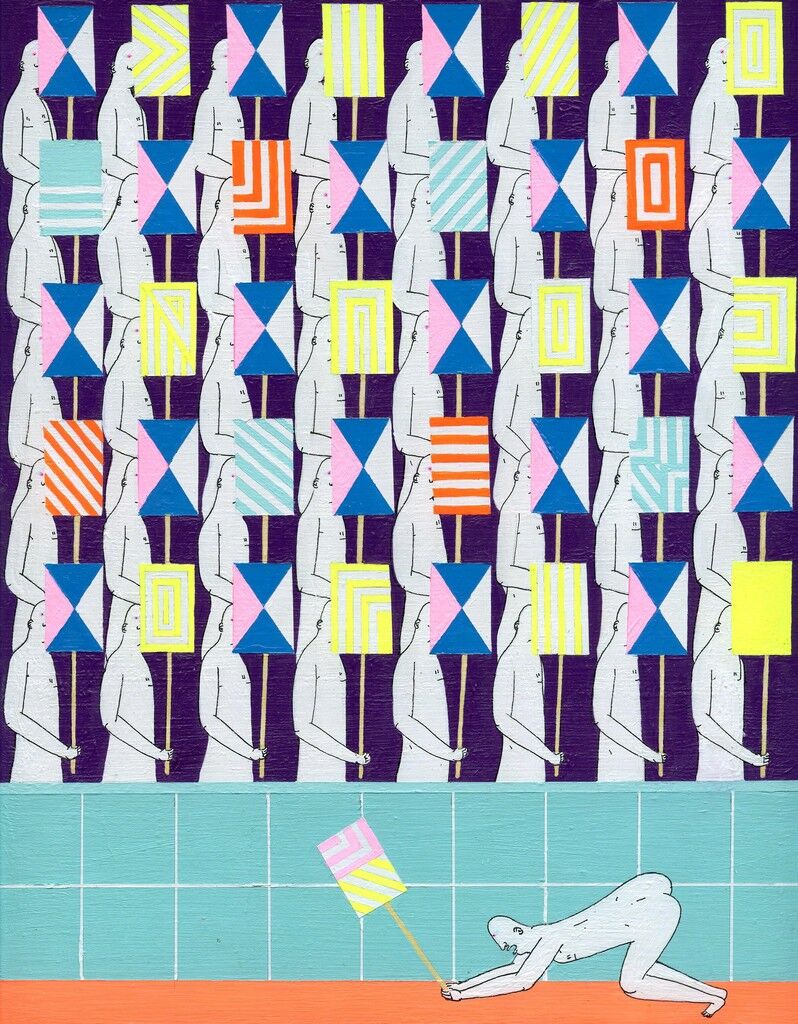 Mark Whalen
Geometric Support, 2015
KP Projects/ MKG
Mining inspiration from math and science, as well as ancient civilizations (his figures recall those found on Ancient Greek vases), Whalen creates work that presents alternate, futuristic universes. Carefully articulated through fine drawing and bold color, these miniature protagonists and the detailed environments in which they live have been recurring elements in the Australian, L.A.-based artist’s work for years, all meant to spotlight, in his words, “satirical social narratives.” 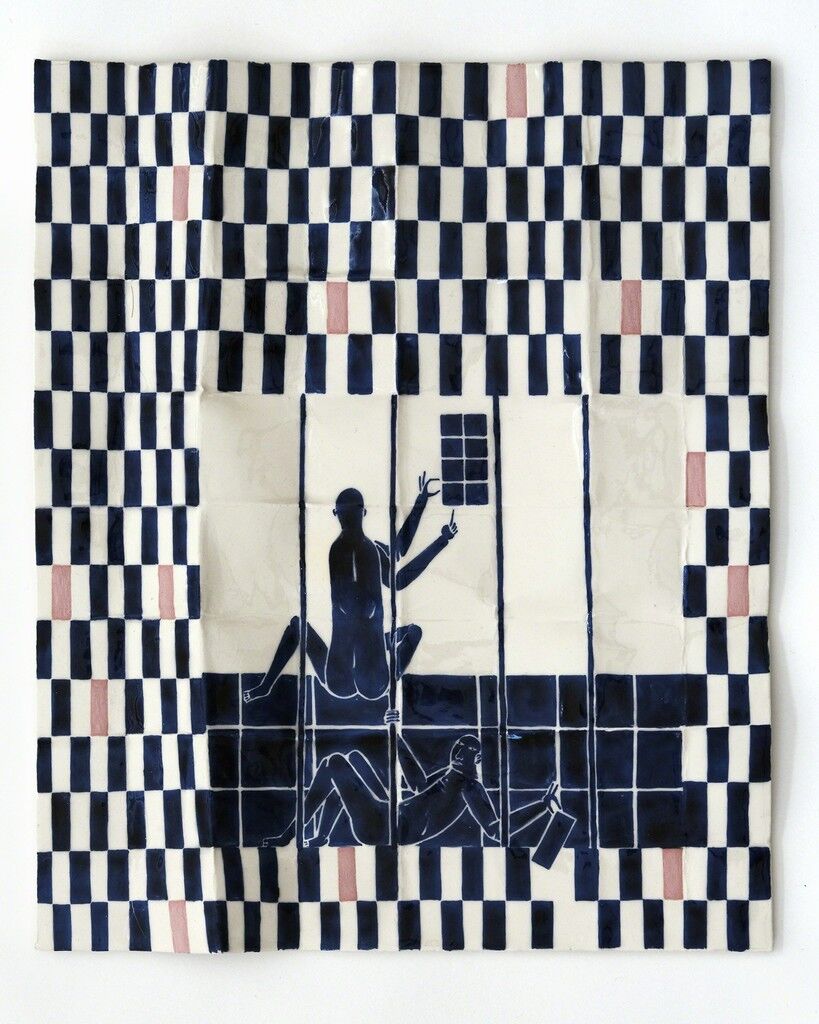 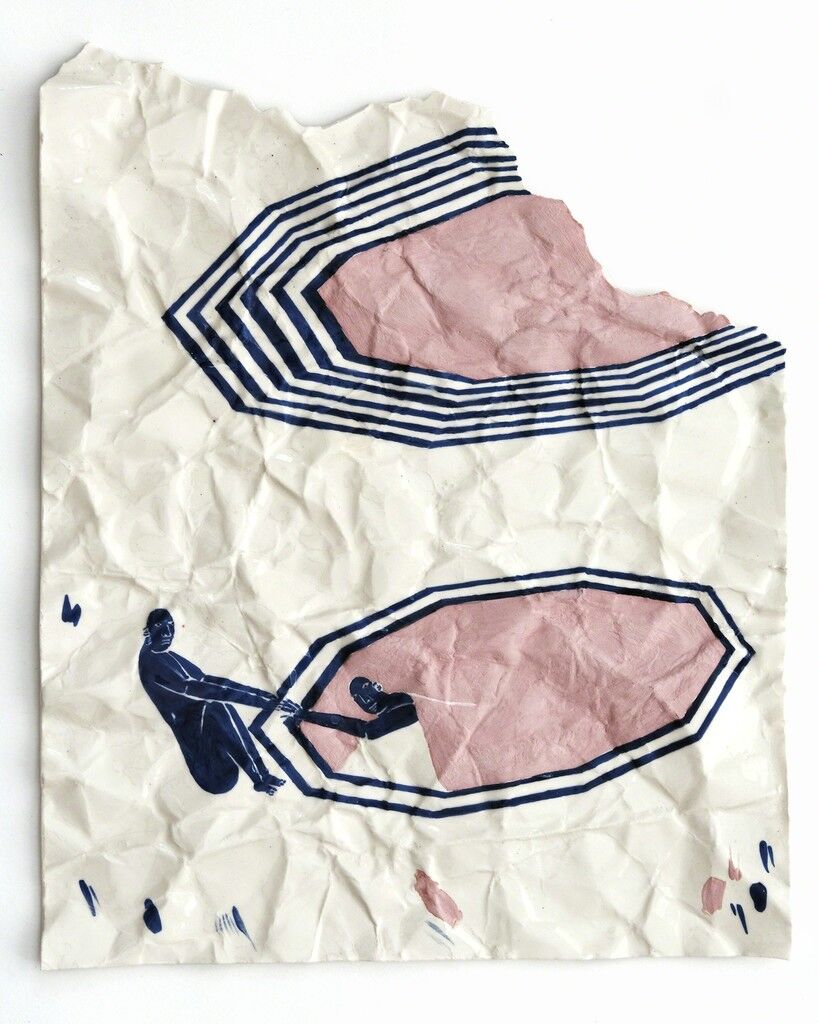 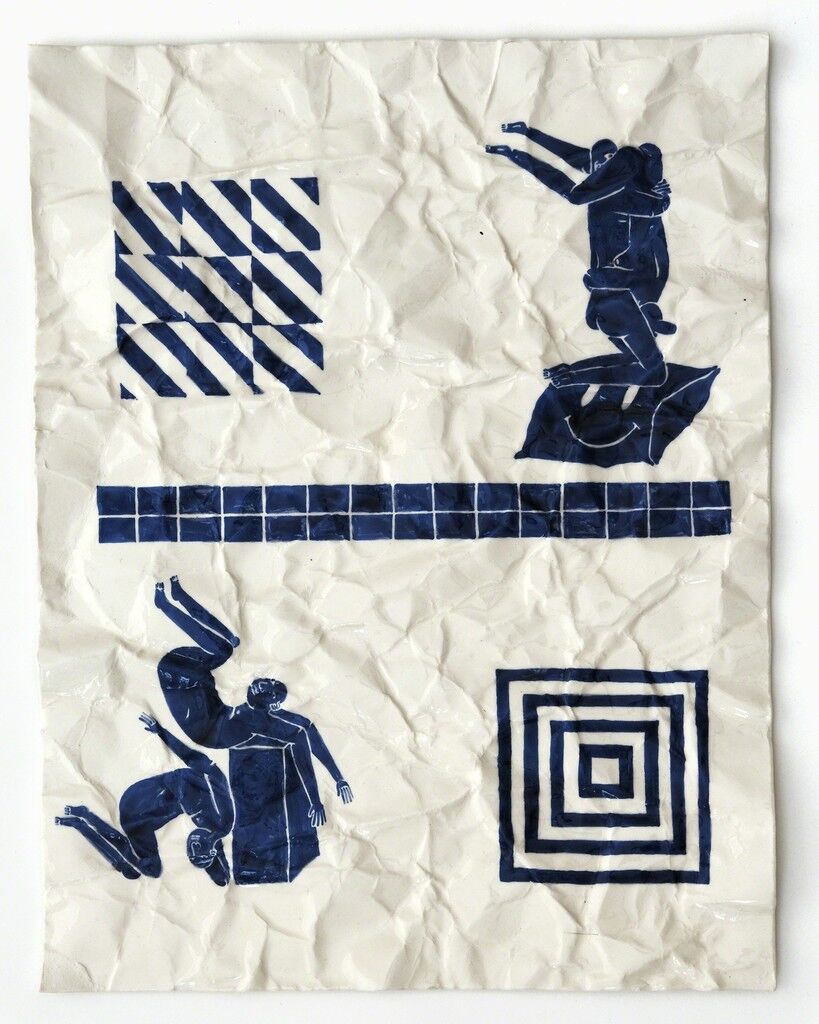 Mark Whalen
Shapes and Forms, 2015
KP Projects/ MKG
Advertisement
Such narratives unfold in settings inspired by the artist’s fascination with mathematically derived patterns and with theories of space and time. They are often filled with repeating geometric motifs—like rectangles, squares, triangles, and diamonds—which are in turn filled with stripes, grids, and other patterns. Sometimes, these elements resolve into forms and locations resembling swimming pools, columns, or domestic or office interiors, while at other times they fill his compositions as pure pattern. The overall (and intentional) effect is one of disorientation or dislocation, of parallel worlds somewhat like our own but not bound, it seems, by the same physical or social laws. 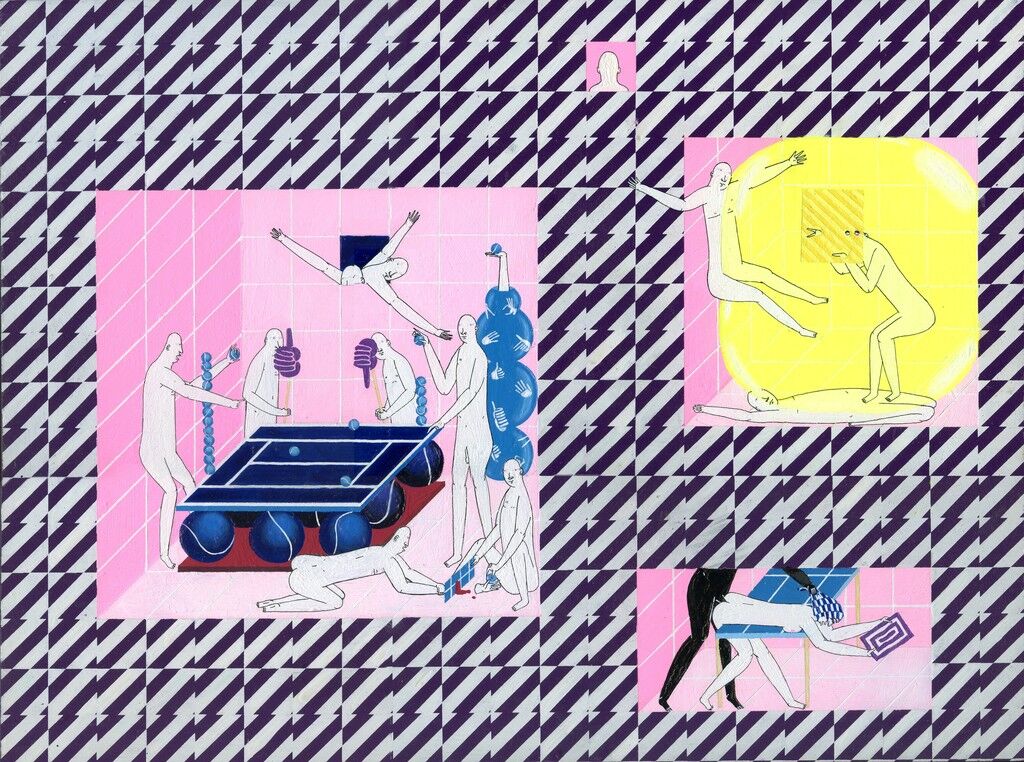 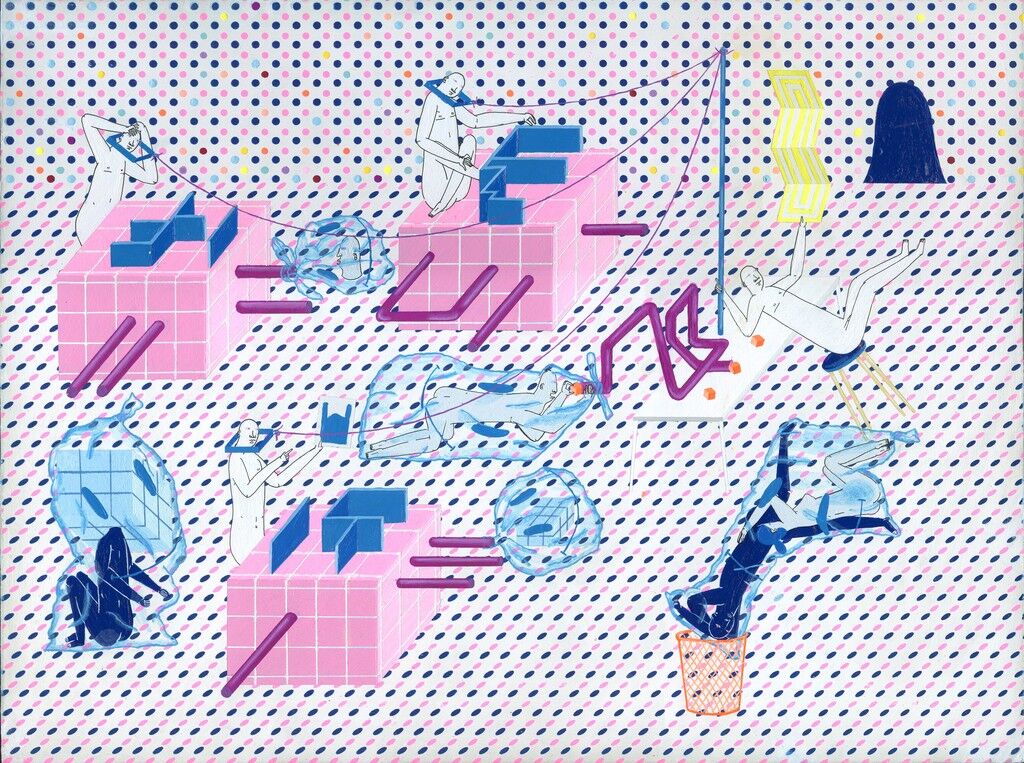 Mark Whalen
Three Men, One Puzzle, 2015
KP Projects/ MKG
Take Edits (2015), for example, a mixed media painting on wooden panel that seems to open onto a room full of copy editors. A trio of massive, gridded pink columns cuts the room into sections, while repeating, flattened decahedrons march up and down the painting’s background, making it appear to tilt upwards. Black- and white-colored male figures populate this strange scene. Loose pages, filled with more geometric patterns, litter the ground and float in the air. There are paper cutters on tables, holding not paper but the white-colored figures, who are being forced beneath their blades by their black-colored counterparts. Whalen’s bright, bold rendering of the painting tempers this grisly scene—provided it doesn’t come too close to reminding viewers of the all-too-familiar condition of workplace politics.
Karen Kedmey
“Mark Whalen | Trapezoid” is on view at KP Projects/ MKG, Los Angeles, Sept. 12 – Oct. 3, 2015.
Follow KP Projects/ MKG on Artsy.
Related Stories